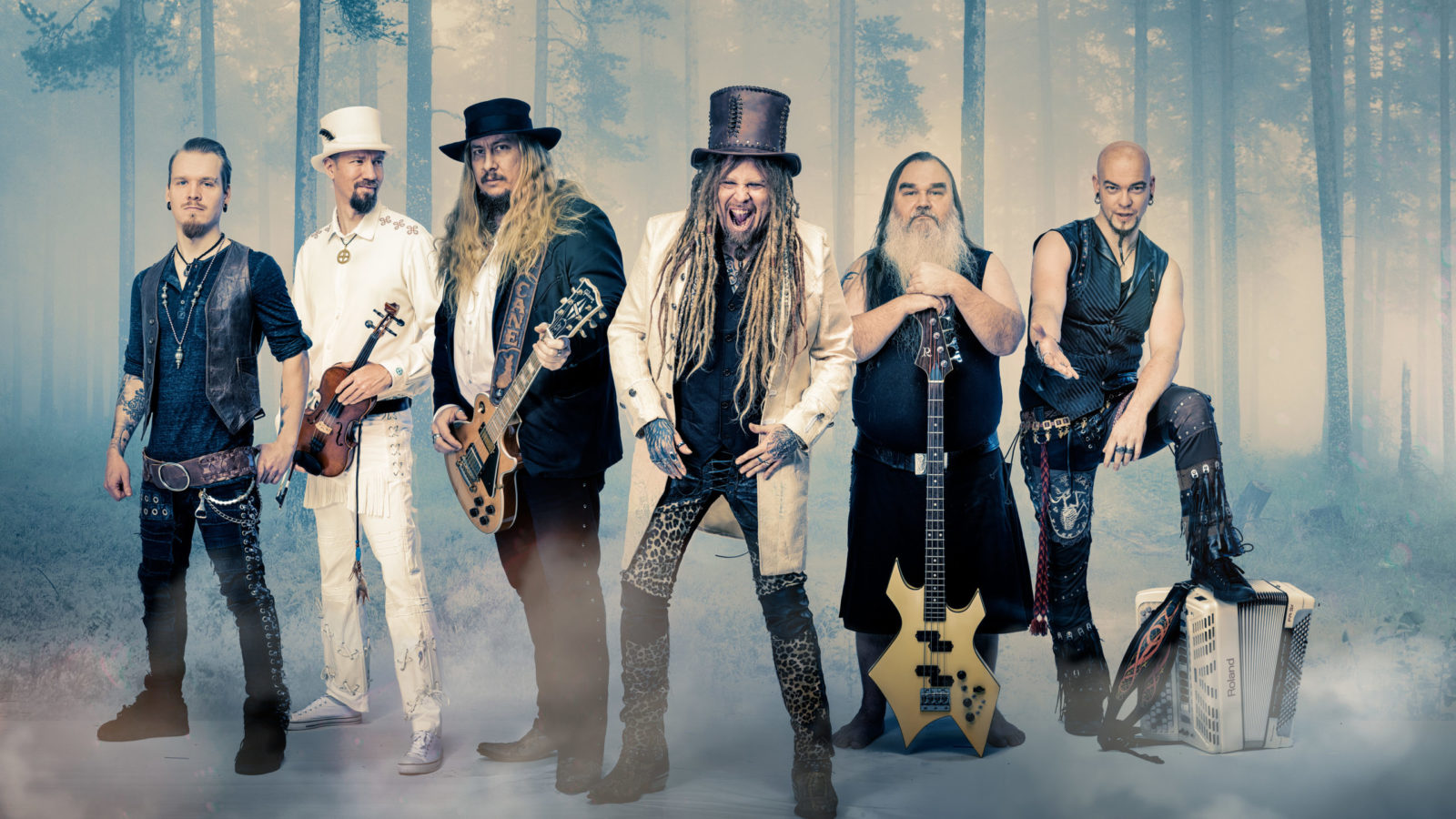 Coronavirus update 18/03/2020: Alas, many of the bands featured in this section undertake lengthy European and US tours, which are now being cancelled (Korpiklaani, Imonolith, Lamb of God, etc). Venue closures mean that most other gigs are being called off too. Pity poor old Anvil, who arrived in the UK before the outbreak and got as far as Stonehenge on their day off, only to find that their Bristol gig had been pulled. We’ll keep this page updated with the latest news.

This big-value vintage bay area thrash triple bill kicked off its epic European jaunt a month ago, so all three bands should be on top form by the time they reach us. The headliners are Testament, who were last seen at a packed Motion two years ago and benefit from one of the genre’s greatest guitarists: Alex Skolnick. Their new album, Titans of Creation, isn’t out until April, so we can presumably expect a greatest hits set. It’s been four years since self-styled purveyors of “good friendly violent fun” Exodus played the Fleece. They too haven’t put out any new music, their latest release being 2014’s Blood In, Blood Out, which ranks as the highest charting album of their career. Death Angel are most fondly remembered for being little kids when they formed and were last seen here supporting Queensryche at the Marble Factory in 2015. They’re the only band on the bill to have a new album out, Humanicide, the title track of which was nominated for the Best Metal Performance Grammy (they lost to Tool).

Phil X and the Drills

Yep, it’s the guitarist from Bon Jovi who isn’t Richie Sambora. Why the mysterious moniker? Well, it’s probably easier for punters to pronounce than his real name: Θεόφιλος Ξενίδης, or Theofilos Xenidis. The Greek-Canadian former session player officially replaced Sambora back in 2016, but has also found time to pursue a solo career with his band The Drills. Their fifth album, Stupid Good Lookings Vol. 2, is out now on Golden Robot Records.

With so many bewildering sub-genres to choose from, sometimes you just need some proper old-school Sabbath/Priest-style heavy metal, bereft of clever-clogs ‘post-metal’ tosspottery. Back in town for the first time since their co-headliner with Enslaved at the Marble Factory back in 2015, ace Swedish trio Grand Magus trade in big chunky riffs accompanied by a full metal bellow from frontman JB. Their ninth album, Wolf God, is out on Nuclear Blast next month.

Another of those fiftieth anniversary tours, this co-headliner brings together two of the great rock workhorses of the 1970s. Those who are paying attention will, of course, note that The Groundhogs are actually enjoying their 57th anniversary, having been founded by Tony McPhee way back in 1963, Johnny-come-lately drummer (and Bristol resident) Ken Pustelnik only piling on board in 1965. So they’re celebrating the 50th anniversary of their excellent third studio album Thank Christ for the Bomb instead. McPhee retired after suffering a series of strokes and there’s no love lost between him and Our Ken, who’s kept the band alive in recent years. We last caught them supporting Radio Moscow at the Exchange back in 2017. Unlike many bands of their vintage, they’ve picked up a new, younger audience in the stoner/desert rock underground, thanks in part to Queens of the Stone Age covering Eccentric Man. Still fronted by Del Bromham, London’s Stray never really broke out of the clubs, but they have benefitted from the enthusiastic support of Iron Maiden’s Steve Harris. Indeed, Maiden covered All in Your Mind from Stray’s self-titled debut album, which was released – you guessed it! – 50 years ago.

The French purveyors of ‘blackgaze’ are back – and this time they’re not touring with the ultra-boring Mono, whom they thoroughly upstaged at the Marble Factory back in 2016. Essentially a duo comprising Jean ‘Winterhalter’ Deflandre (drums) and Stéphane ‘Neige’ Paut (everything else), they’re augmented by two additional musicians for live performances. Blackgaze? It’s an unlikely but effective combination of black metal and shoegaze. Alcest’s commercial fortunes picked up once they’d crawled out of the underground to sign with Nuclear Blast for 2016’s Kodama, which marked something of a return to form after the audience-dividing Shelter. Newie Spiritual Instinct is their highest charting release to date and currently has an 82/100 ‘universal acclaim’ rating on Metacritic.

POSTPONED UNTIL MAY 13 Hands Off Gretel

Spirited punk-o-metal from Barnsley and, er, Bristol. Yep, that’s right: their bassist is Becky Baldwin of this parish, who plays in a bewildering number of bands in a bewildering variety of styles, from prog-metal to melodic rock. How does she find the time? Anyhoo, Hands Off Gretel do the high-energy rock thing with an overt feminist twist. The title track of self-released second album I Want the World was described by Classic Rock as a “skater punk mashup of No Doubt, Lady Gaga and [Well Hung Heart’s] Greta Valenti.”

The rather fine Polish technical death metallers are back, still touring their Anticult album from 2017. But this time they’re bringing lots of chums. That’s right – those for whom just the one death metal band simply isn’t enough will be overjoyed to learn that this Faces of Death tour comprises five of the blighters. We’ve deciphered the other acts’ unreadable logos so you don’t have to: Beyond Creation, Ingested, Lorna Shore and Viscera. You’ll need to get there early to enjoy the full onslaught, mind, as doors are at 6pm.

Is it possible to respect anyone who doesn’t love Korpiklaani? One suspects not. Yes, OK, so the great Finnish folk-metallers have been known to be, ahem, rather too refreshed to give a fully professional performance in the past, but this comes with the territory. If you’re a newcomer to the band, you need to know that there are essentially two types of Korpiklaani song: drinking songs (Vodka, Wooden Pints, Beer Beer, etc) and songs rooted in Sami folklore. Indeed, dreadlocked frontman Jonne Järvelä started out in a traditional folk band before realising that metal was much more fun, and remains a fine exponent of yoiking (look it up). They’re now up to their tenth album, Kulkija. Support comes from all-female Swiss quintet Burning Witches, who trade in proper, fist-pumping heavy metal. Their new album, Dance with the Devil, is out now on Nuclear Blast. Alas, this tour has been cancelled because of the postponement of Hammerfest, which was in turn caused by that pesky virus. It’s early days for news on rescheduled dates.

Back in the clubs after that brief upswing in fortunes occasioned by The Documentary, lovable Canucks Lips and Robb (plus bassist Chris Robertson) are celebrating the release of Legal at Last. Lest you get the wrong idea, it’s so titled because marijuana has finally been legalised in Canada – much to these bong-friendly metallers’ collective relief. Indeed, they address a brush with Mr. Plod on the track Nabbed in Nebraska. Elsewhere, it’s all pleasingly dunderheaded stuff as usual from the world’s most famous second-division metal act.

Not sure which one’s Snake Oil and which one’s Harmony, but this acoustic duo comprises everybody’s favourite rockin’ buddhist Dan Reed and Danny Vaughn of the perennially under-rated Tyketto. Their debut album, Hurricane Riders, is out now. We can expect to hear plenty from it tonight, along with other reworked tracks by bands with connections to the duo.

Can we get a yee-haw for local talent? Having sold out the Louisiana just before Christmas, Bristol’s very own southern rockers Sons of Liberty move up to the Thekla. They started out as a covers act, but got such a strong audience response to songs from their …Shinola and Aged in Oak EPs that they swiftly shifted to all-original material. Debut album Animism – “eleven new tracks of pure Awesomism” (their coinage) – was released by Roulette Records last October and they’ve been busying themselves honing their craft (and well-developed sense of self-deprecating humour – see video above) on the rock festival circuit. “Prowling the stage while clutching his cane and tooting his harmonica, hilarious frontman Rob Cooksley is captivating, and a rip-roaring Up Shit Creek proves to be highly cathartic,” enthused Planet Rock mag of the band’s recent Planet Rockstock performance. If you enjoy the likes of the Cadillac Three, Blackberry Smoke or vintage Molly Hatchet, pull on those cowboy boots and head on down to the rockin’ boat.

Neither Nordic nor giants, this English duo is one of the more leftfield signings to the Kscope prog label. Their performances are full-on audio-visual affairs with cinematic projections, while the twosome – who go by the names of Rôka & Löki – hide behind elaborate masks. Inevitably described by some as ‘post-rock’, their suitably cinematic music is peppered with inspirational samples from the likes of Martin Luther King and Terrance McKenna (ask your dealer). Support at the Fleece comes from A.A. Williams, who’s signed to the Holy Roar label and plays metal-friendly dark acoustic music. If you’re partial to Myrkur, Chelsea Wolfe or Emma Ruth Rundle, she’s well worth a listen.

You may recall Rews opening for Halestorm and Avatar at the Academy and The Darkness in Bath. Judging by current single Birdsong, this experience seems to have inspired them to rock out more heavily, rather than succumbing to the temptation to become yet another bland girly indie act. This is only to be encouraged.

Yep, it’s the annual sold-out gig by the rockgrass pioneers, who came to fame with their splendid AC/DC covers. Alas, 2017’s Free Your Mind . . . and Your Grass Will Follow continued to dilute the rock’n’metal with some unwelcome other stuff (Love Train, anybody?), but did include a cover of Skynyrd’s brilliant The Ballad of Curtis Loew. Latest release (their 16th!) Blast from the Grassed carries on in this vein, with everything from Taylor Swift (You Need to Calm Down) to – no, really – New Order (Blue Monday). “If you already love Hayseed Dixie, then you’ll love this album too,” they assert. “If you think Hayseed Dixie suck ass, then this record with simply confirm that for you (for the 16th time).”

Last time we saw guitarist Brian Waddell and drummer Ryan Van Poederooyen they were on stage at the Colston Hall as part of the Devin Townsend Project. So it’s perhaps rather surprising that the Canadians’ new five-piece band should have such a low-profile UK launch. Still, that’s good news for those of us in the know as it means we get to experience them at close quarters. As one might perhaps expect given their pedigree, Imonolith’s repertoire runs the gamut from crushingly heavy riffage to catchy and melodic rock radio fare. Their debut album, State of Being, is out now.