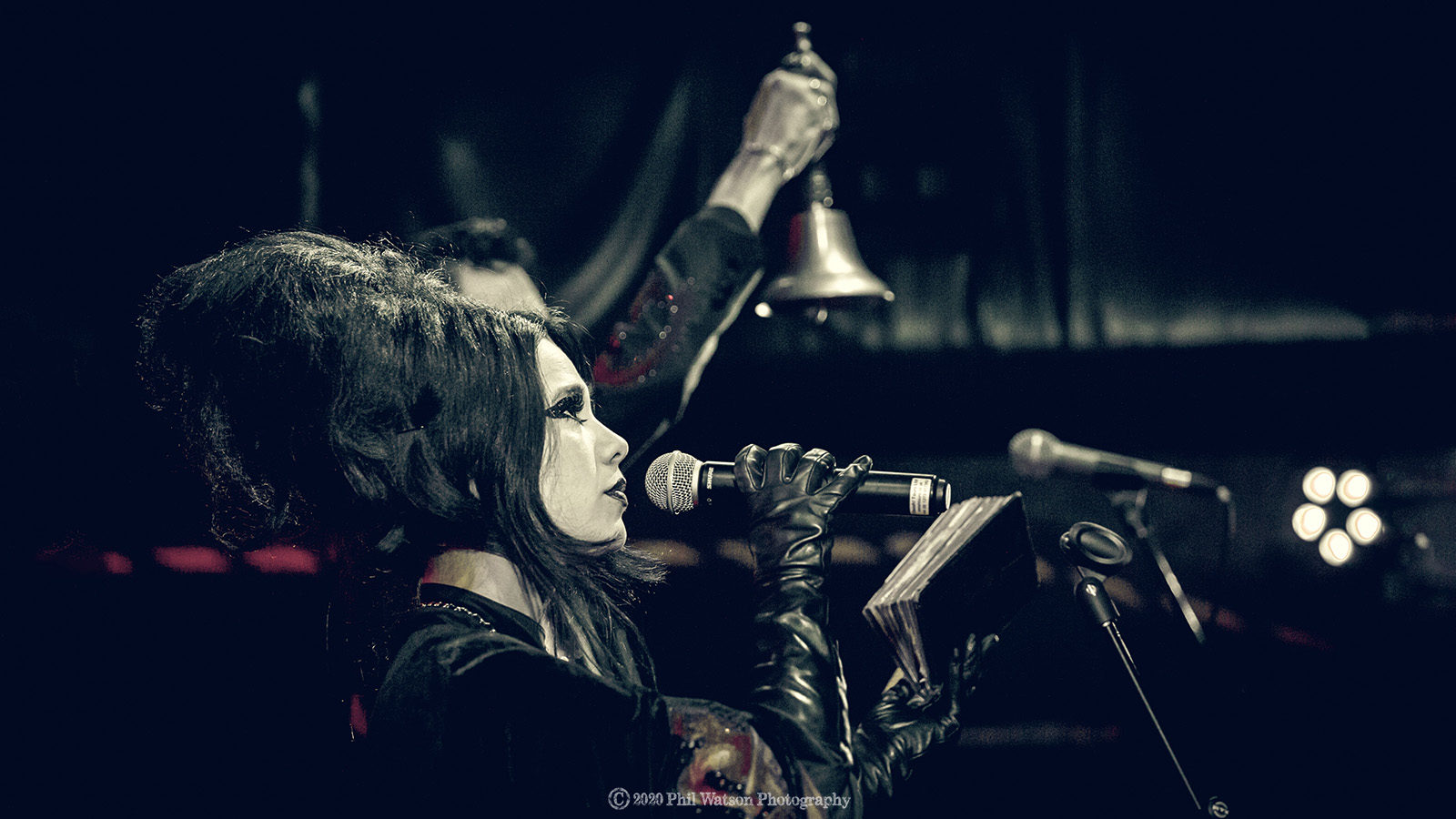 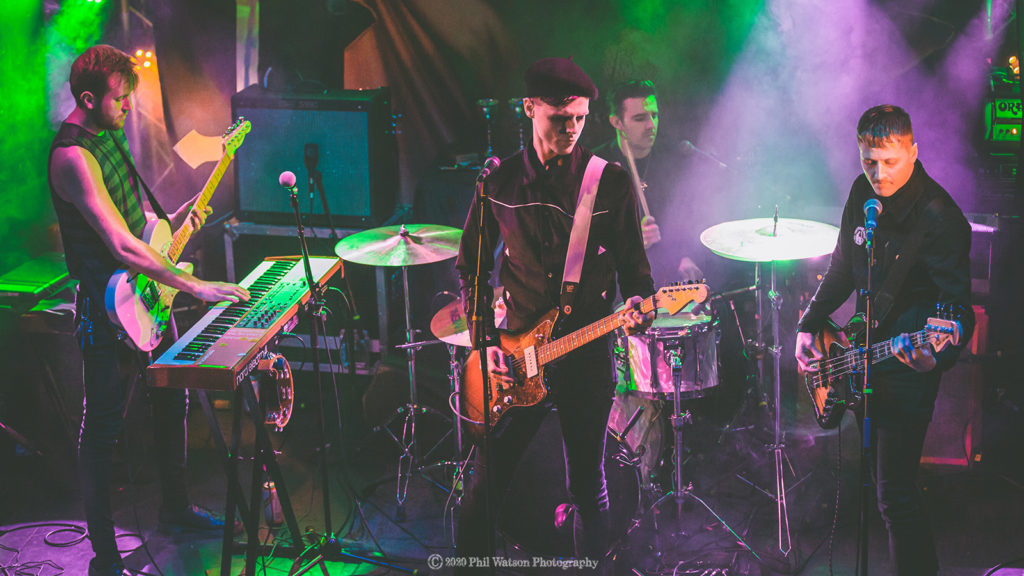 It’s actually quite novel to hear this goth-punk stuff again, albeit rebranded as ‘darkwave’ for a new generation. They’re well rehearsed if rather generic, the chief obstacle to their progress being the singer’s inability to hold a tune. 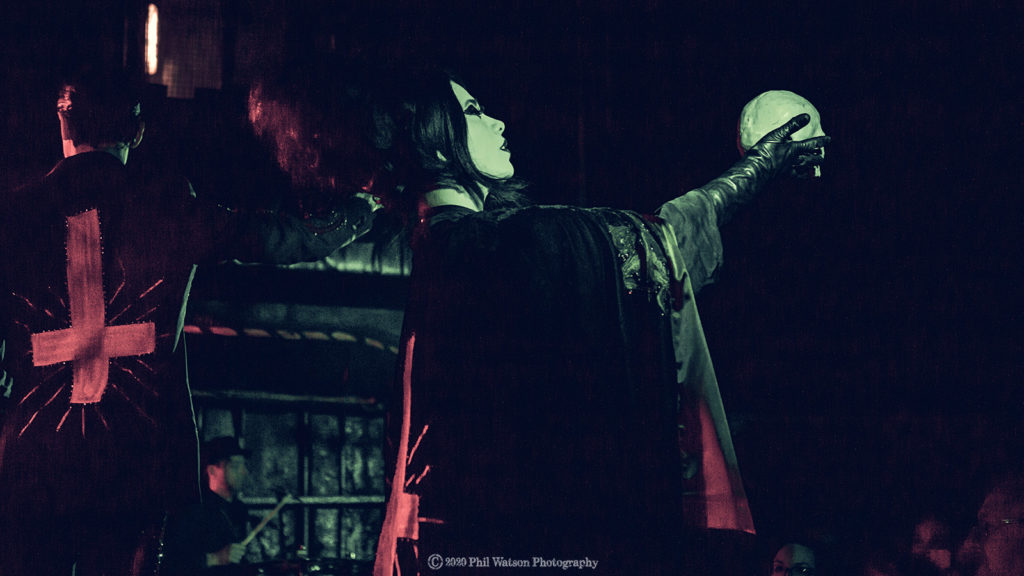 Welcome to the dark, sinister and, er, really rather jolly world of Twin Temple. They look like they’ve stepped out of a David Lynch movie – or, at the very least, The Love Witch. They’re signed to a metal label and are adored by metalheads (catch them at Download in the summer) but don’t play metal. And the branch of the left-hand path followed by these feminist Lucifer lovers is more social justice warrior Satanic Temple than selfish LaVeyan Church of Satan. It’s safe to say the “wickedest band in the world” have carved out a niche, possibly with one of their ritual swords, in which they have no peers. 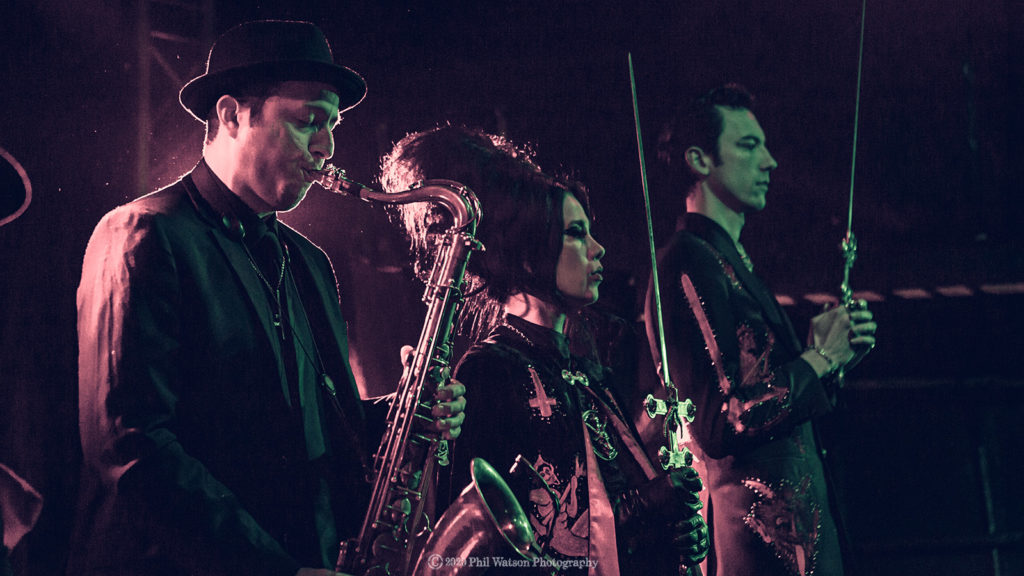 That striking twin inverted crucifix backdrop illuminated by a blood red light, the band take up their positions and keyboard player Jeffrey Howell begins with some suitably ominous organ chords. In another context, this might presage full-on black metal fury. But in this Temple, it heralds the arrival of wife’n’hubby Alexandra and Zachary James for an opening ritual that entails much sword-waving as the former declaims the purpose of the gathering: to summon the flames of Hell to burn down sexism, racism and ignorance. Much gleeful whooping ensues as we bellow the names of Babylon (y’know – as in the Whore), Beelzebub, Lucifer and Lilith. “Are you feeling evil, Bristol?” she demands. We certainly are. 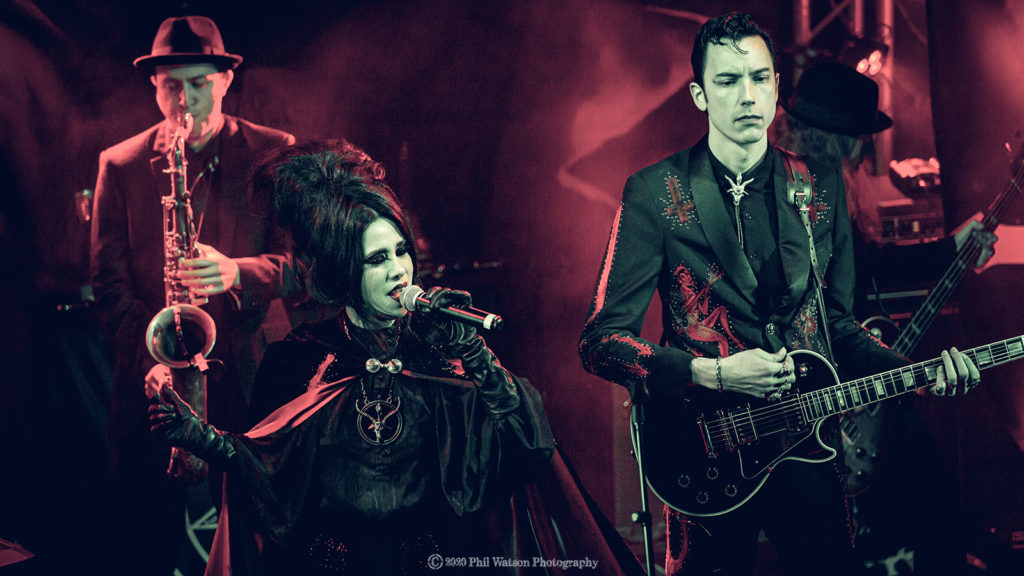 All of this would be just so much gimmickry if they weren’t such fine musicians. Alexandra has a voice as Nancy Sinatra big as her gravity-defying beehive (which positively invites those Winehouse comparisons), while lanky Zachary gives great twang as he mines ’50s American doo-wop and early rock’n’roll for musical inspiration, heading south of the border with Santa Muerte. 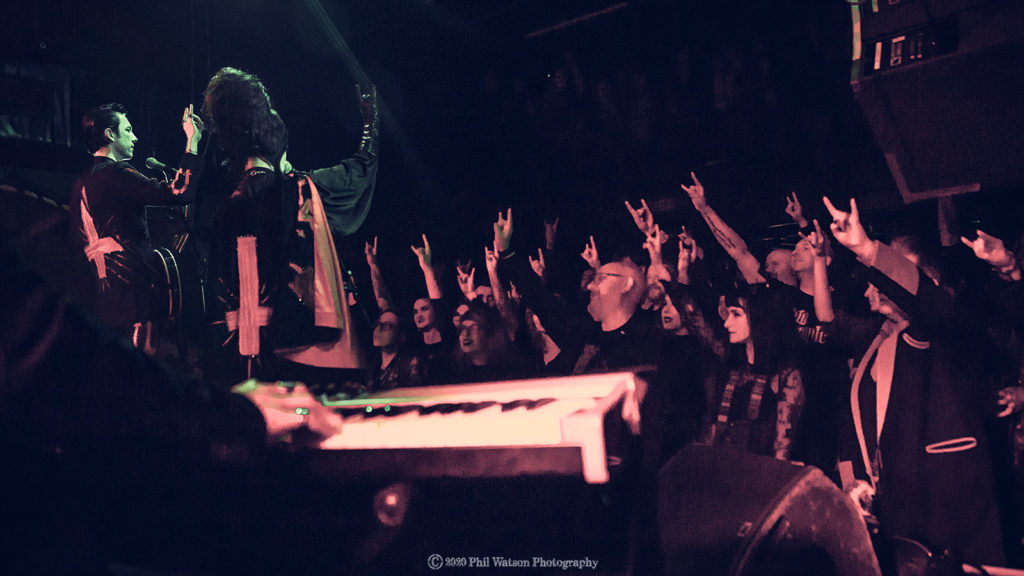 The show is slick and road-honed, interspersing ritual with music but never permitting the former to outstay its welcome. There’s plenty of opportunity for audience participation too, as we’re repeatedly invited to raise our horns and chant the names of Satan. A bloke down the front seems positively overjoyed to find his forehead on the receiving end of Alexandra’s heel during I’m a Witch. 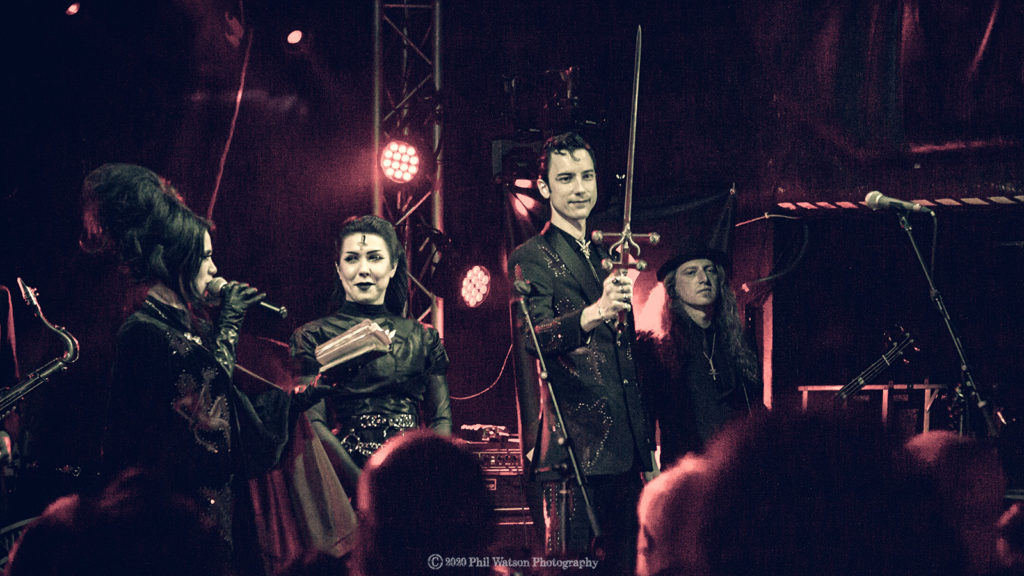 Later, hordes of aspiring initiates vie to be selected for the Babylon ritual. A woman named Dominique proves a good choice, selling her soul with gusto as she’s blindfolded and manacled to symbolise the ties of ignorance. Refreshingly, much of the merch seems to be aimed at women too (love those Hex the Patriarchy T-shirts and Satan’s a Woman badges). 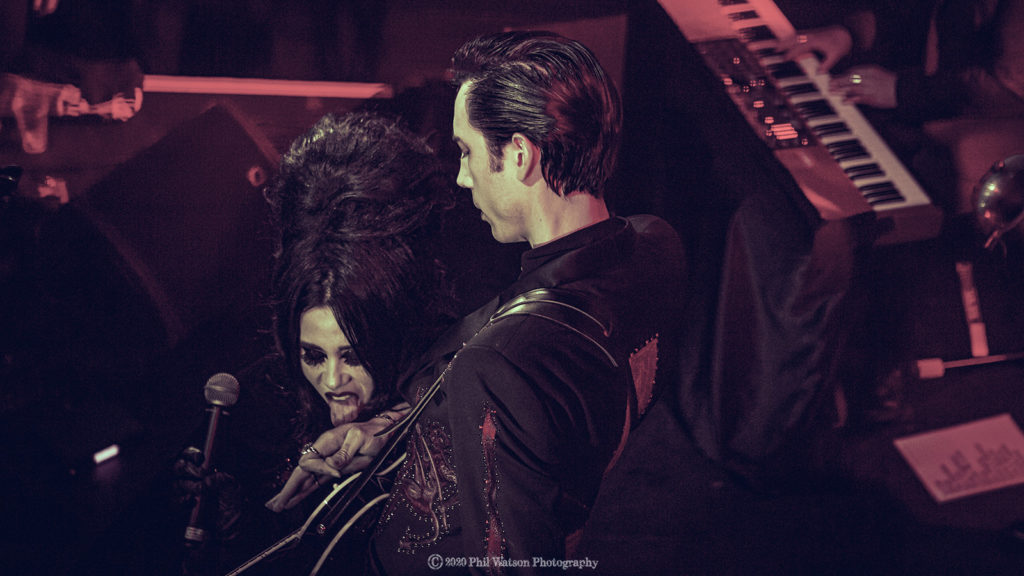 It’s hard to avoid that old saw about the Horned One having all the best tunes (with the possible exception of Cradle of Filth’s cover of Sir Cliff’s Devil Woman), the likes of Sex Magick and The Devil (Didn’t Make Me Do It) being custom built for hearty singalongs. But Alexandra also has a winning way with a blasphemous lyric. “You’re a much better kisser than Jesus,” she smirks delightfully during that beautiful ballad Lucifer, My Love. 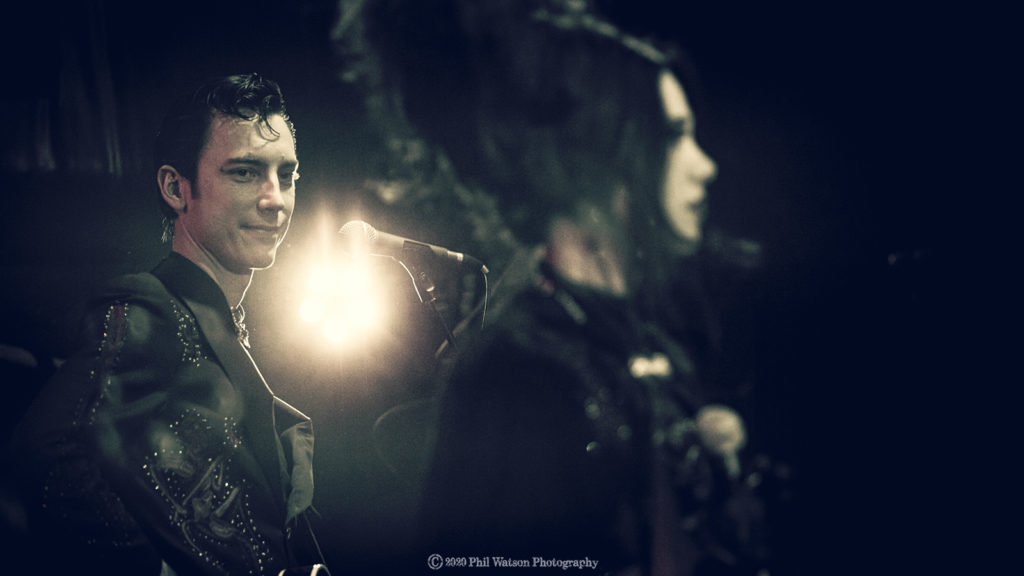 Let’s not forget the rest of the band too, especially saxophonist Kyle O’Donnell, who parps up a storm during a couple of ecstatically received solos. Alongside Papal Nihil of Ghost, he’s leading the way in reclaiming brass instrumentation for the sinful. 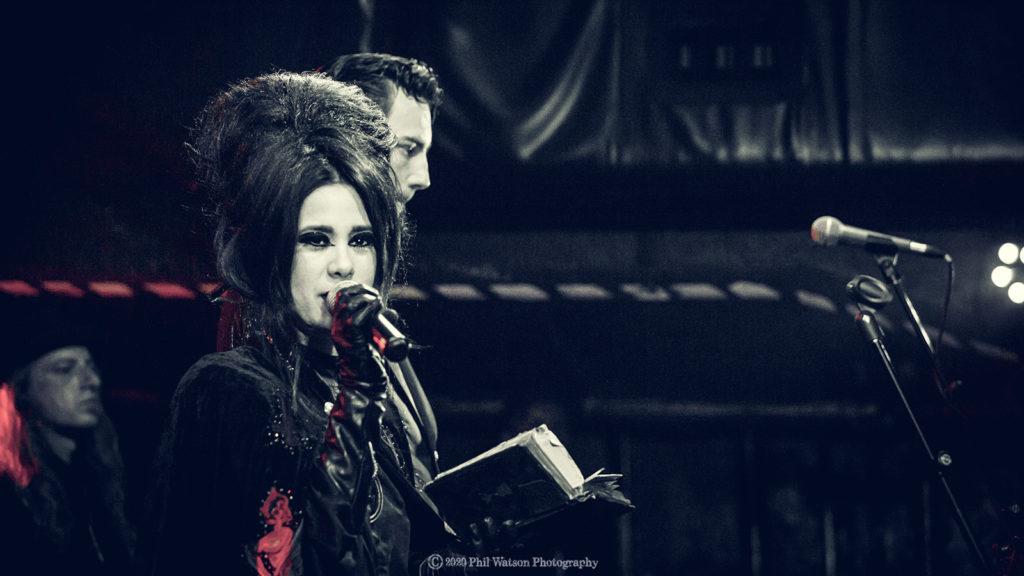 Sadly, all evil things must come to an end, so Twin Temple leave us with I’m Wicked (“I’m the devil, and I got you under my spell . . . Don’t obey God or any other men”). Alexandra takes a huge gulp of ‘blood’ from her chalice and spits it all over the front row. Those who’ve missed out file forward eagerly to be anointed on their personal Highway to Hell.