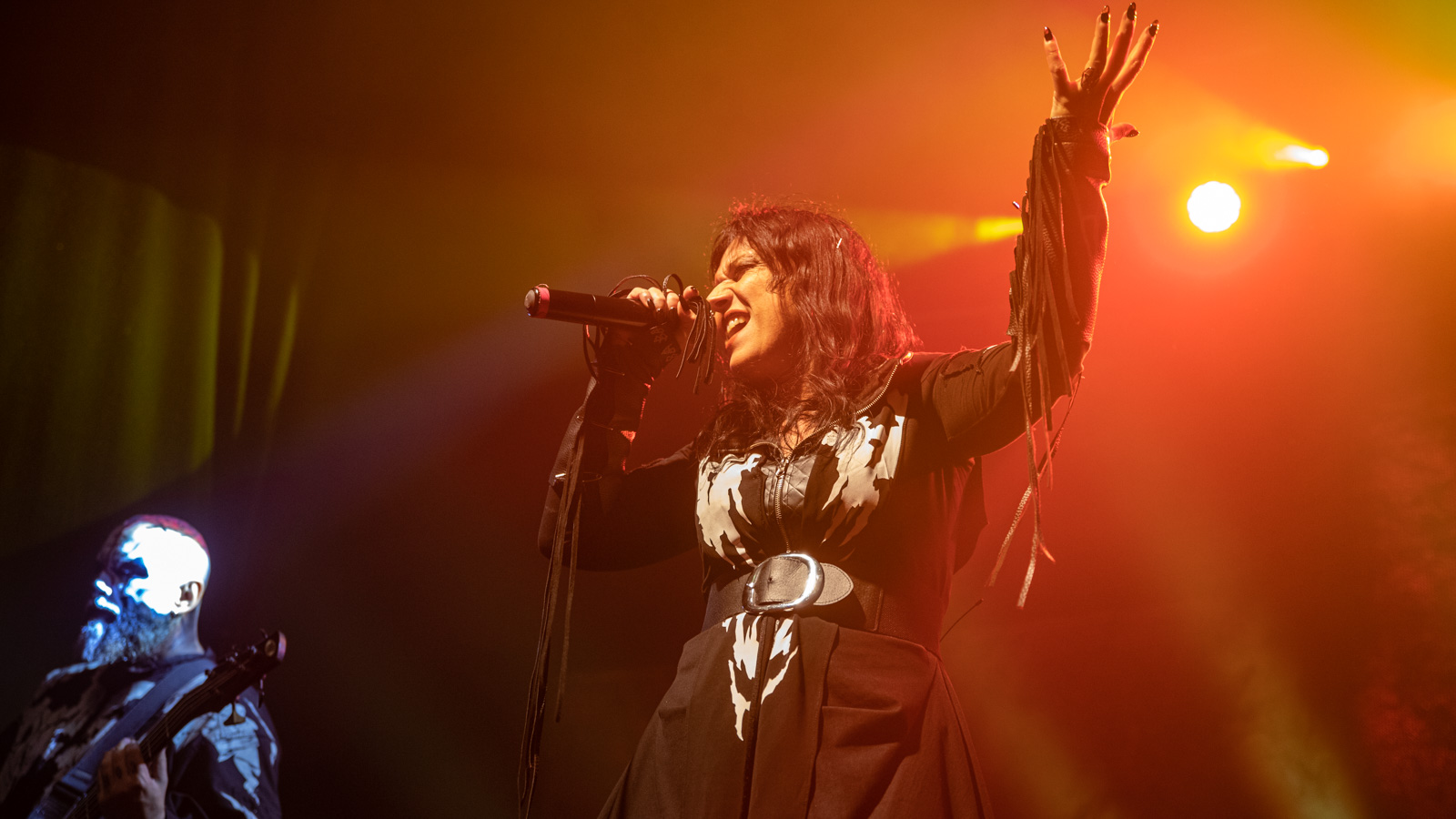 Moldovan metallers Infected Rain seem absolutely delighted to be on stage at SWX at 6:30pm on a Friday evening. As well they might. They’re halfway through their first ever visit to the UK on a sold out tour that gives them the opportunity to win over large crowds who are, for the most part, completely unfamiliar with their raging brand of metalcore-meets-melodic death metal. 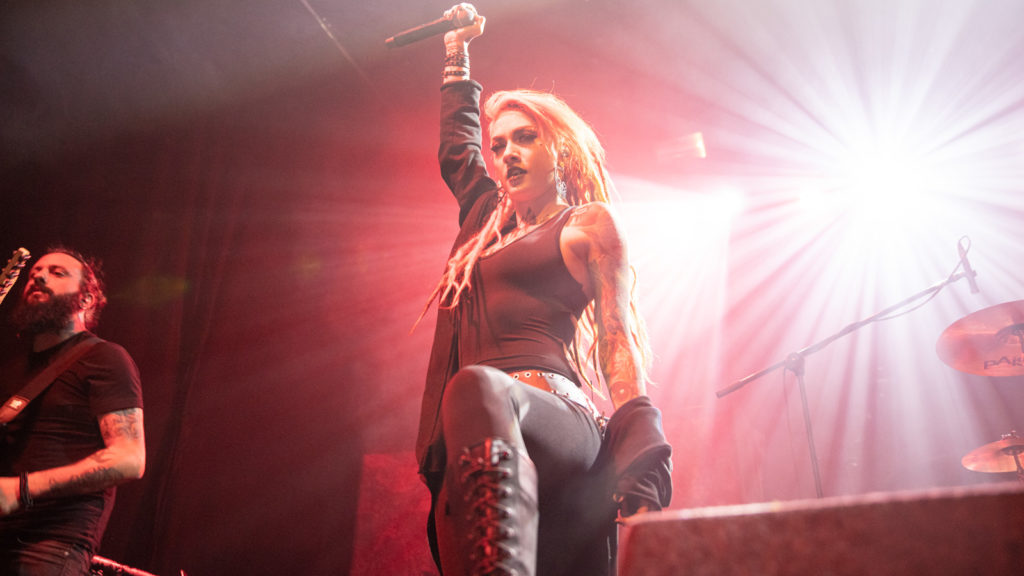 Just one problem. For some unexplained reason, they’re a guitarist down, leaving lavishly dreadlocked Vadim Ozhog to handle all the downtuned seven-string action. But they have a cunning plan. Cannibalising the other two acts on the bill for stand-ins, they first bring on Lacuna Coil’s Diego Cavalotti. Then when he scuttles off, presumably to pull on his costume and apply the slap for the headline performance, Eluveitie’s Jonas Wolf lends a hand. 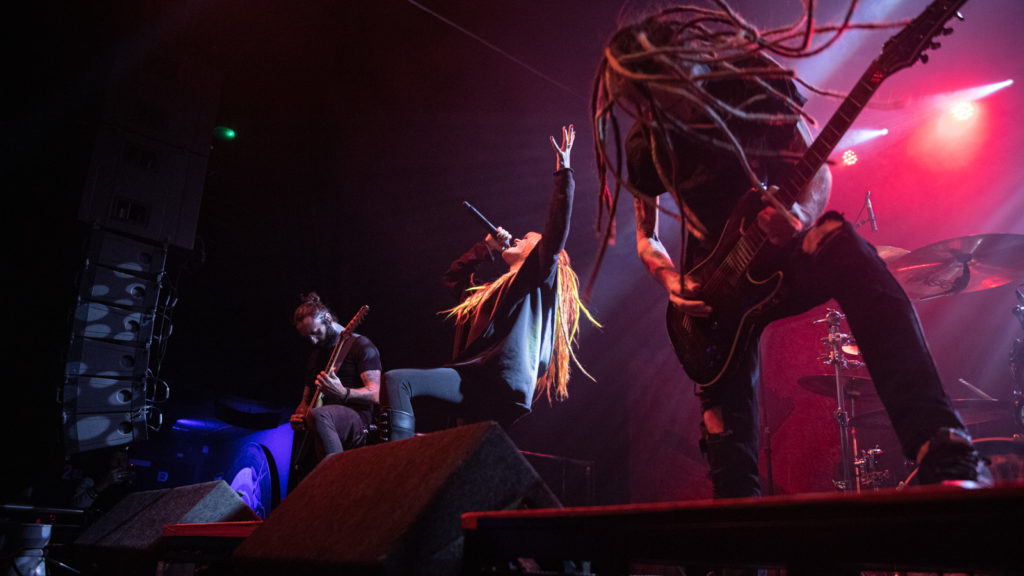 Now you might expect this disadvantage to lead to a sub-par, or at least subdued, performance. Not a bit of it. They just go for it, impressively tattooed frontwoman Elena Cataraga (Stage name: Lena Scissorhands) being a whirlwind of polychromatic fury as she throws herself around the stage, bounds into the audience and even incites a modest circle pit, while impressively alternating between growled and clean vocals – often within the same song. 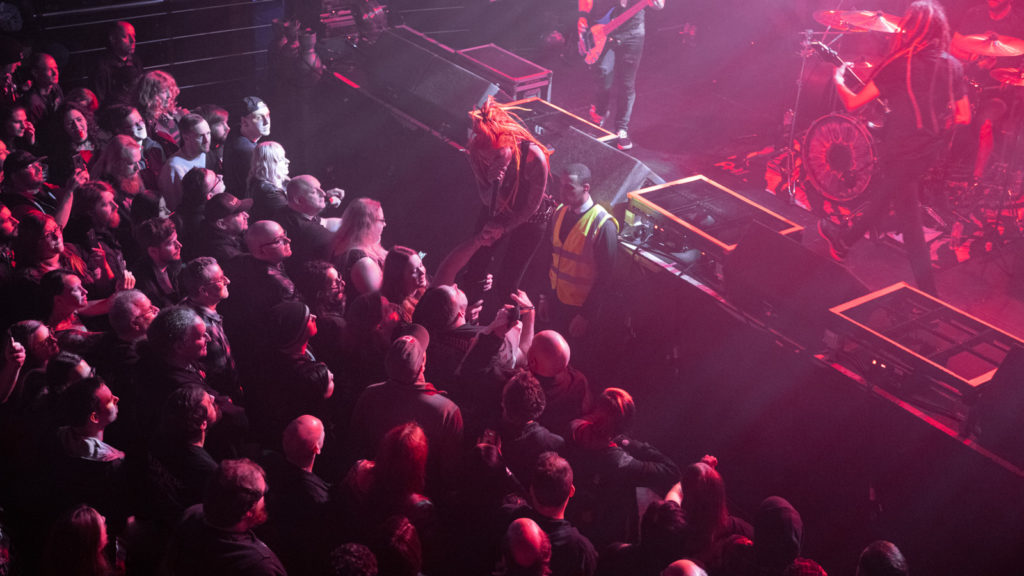 Musically, it’s hard not to be put in mind of their Ukrainian labelmates Jinjer, who play a headline show at the Thekla next month, and while Infected Rain perhaps lack the killer song that will propel them to the next level they’re well worth seeking out if they return for a club tour. 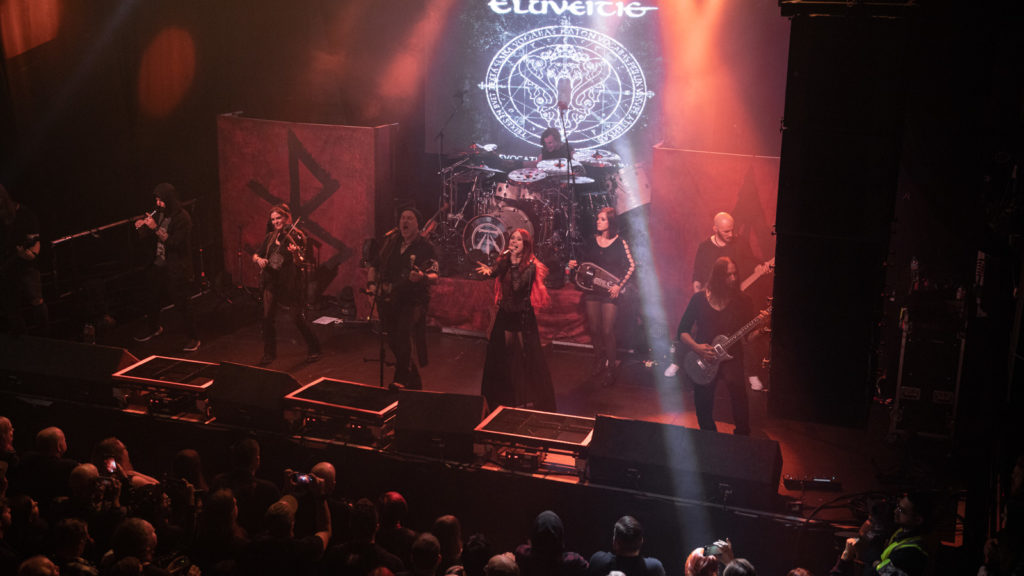 There’s an instructional video on Eluveitie hurdy-gurdy player Michalina Malisz’s YouTube channel in which she demonstrates the three different techniques she uses during the song Rebirth. It’s a reminder of just how complex and demanding the Swiss folk-metallers’ music is to play. On stage, there’s often a trade-off to be made between subtlety and volume – especially when they’re the support act – the challenge of amplifying and mixing nine musicians, whose instruments range from tin whistle and bagpipes to metal guitars, being a sound engineer’s nightmare. 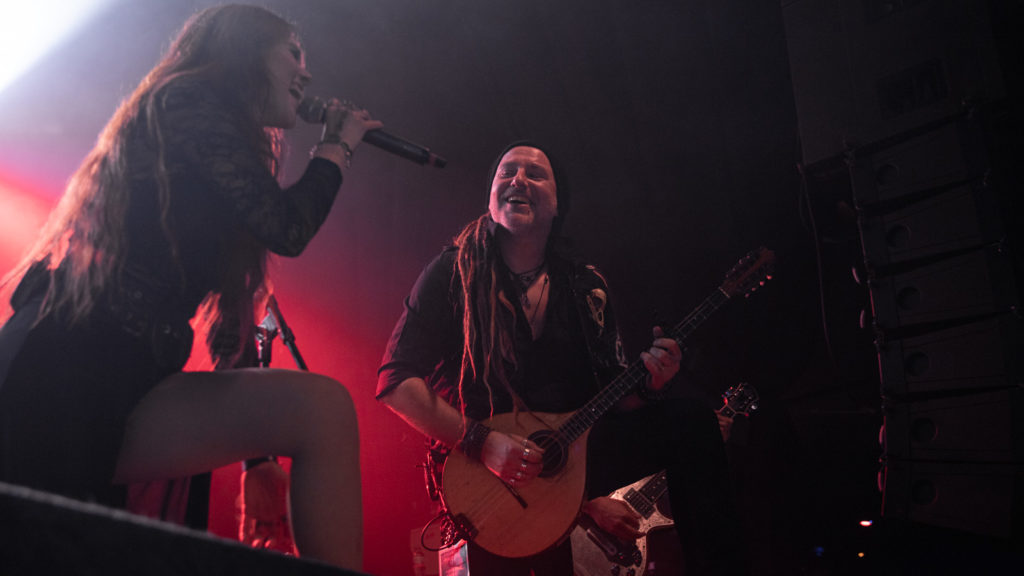 But founder Chrigel Glanzmann has been doing this stuff for nearly two decades now, with a seemingly ever-revolving band of musicians, and tonight any early imbalances are swiftly ironed out – although Fabienne Erni’s celtic harp remains pretty much inaudible throughout. Clearly, for many here Eluveitie are as strong an attraction as the headliner, their contrasting styles making for a big-value package, which perhaps explains the tour’s success. 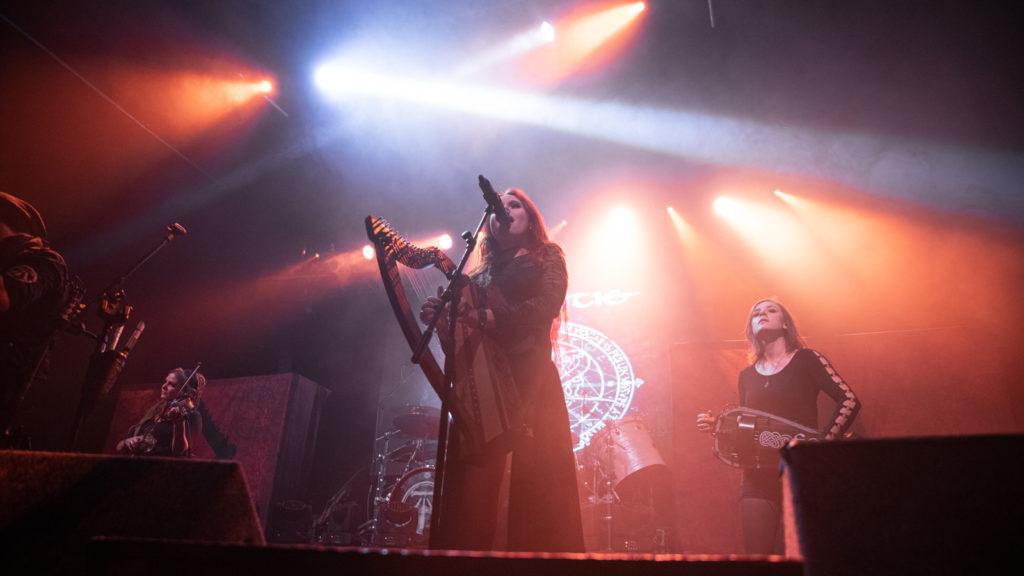 Given a generous support slot and full use of the stage, Eluveitie treat this as a headlining performance and use it mainly to showcase new album Ategnatos, opening with the striking title track. Connoisseurs of folk-metal will know that this is an especially broad church, ranging from acts who specialise in jolly, boisterous drinking songs (Korpiklaani, Wind Rose – recently seen at this very venue) to those who go heavy on the acoustic atmospherics and Norse/Pagan ritual (Wardruna, Heilung). Glanzmann has been unwavering in ploughing his own furrow, with meticulously researched and annotated albums rooted in Helvetian history and mythology, whose lyrics are frequently in Gaulish. On paper, this might seem like heavy going, but in concert it’s just as much fun as the bands who sing about dwarves, elves and getting drunk and falling over. 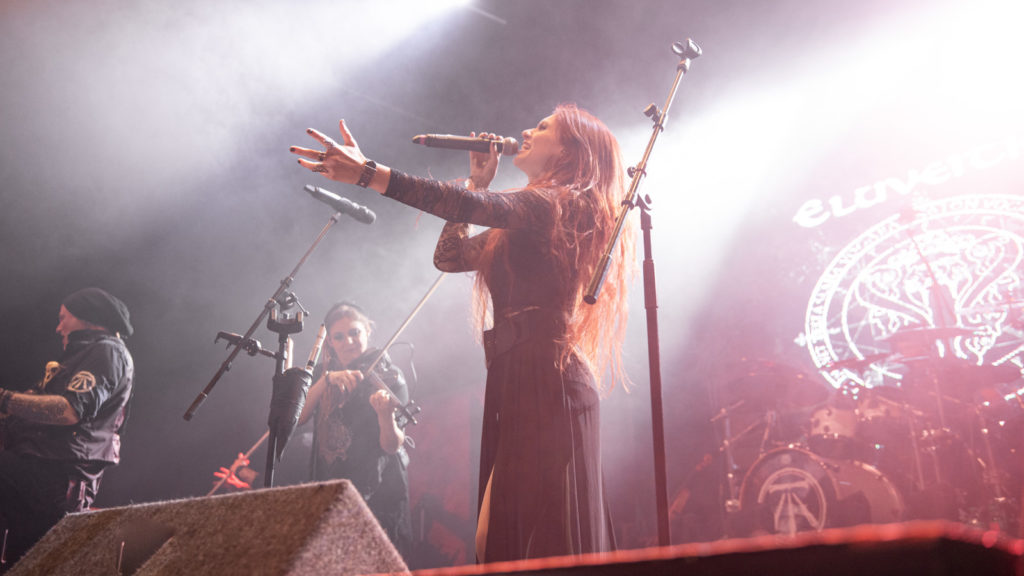 As usual, Glanzmann asks us if we’d like like to hear The Call of the Mountains in English or Swiss-German, and as usual, being good Europeans, we bellow overwhelmingly for the latter – i.e. De Ruef vo de Bärge. Her harp might be buried somewhere in the mix, but Erni’s soaring vocals bring those Celtic melodies life – never more so than when she gets an unaccompanied solo spot. 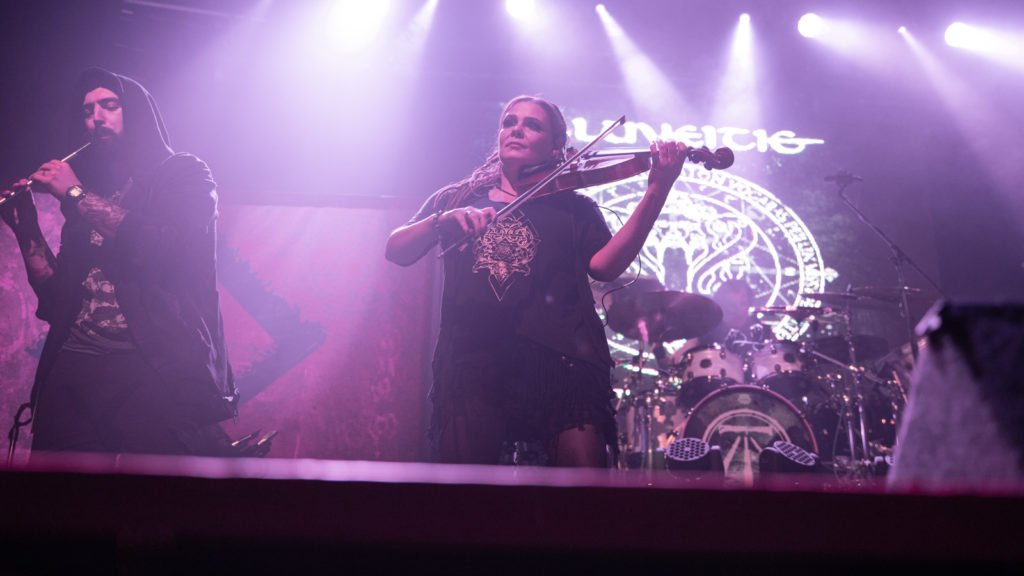 Elsewhere, Nicole Ansperger’s violin melds beautifully with Michalina Malisz’s hurdy-gurdy. When they’re all going full-tilt, with guitars blazing and Glanzmann’s roaring death metal growls, it’s a thunderous sound that would probably terrify trad folkies but is received with wild enthusiasm by this audience. 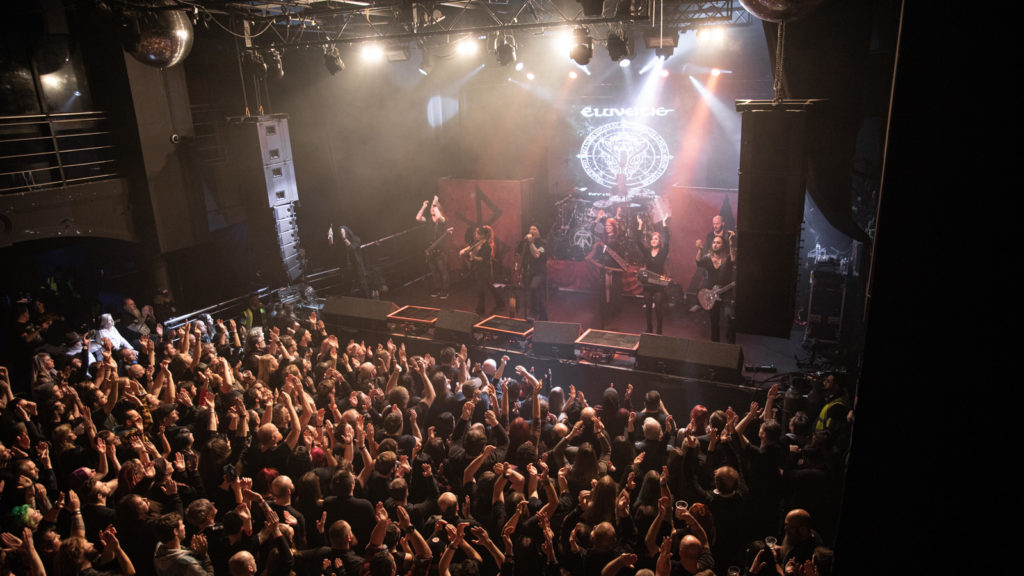 Eventually Matteo Sisti swaps his tin whistle for the bagpipes and we all know what’s coming next: the big singalong Inis Mona (it draws on the trad Breton song Tri Martolod, as popularised by Alan Stivell, fact fans), from the breakthrough Slania album. Who can blame them for milking the applause after that? And any chance of a proper headlining tour? 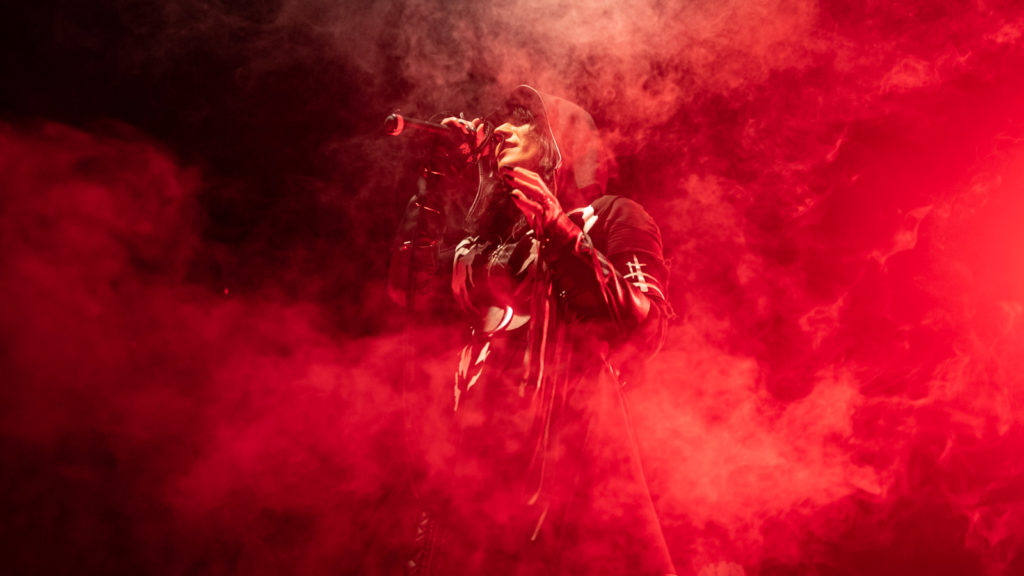 Bucking the usual trend, Italian goth-metal pioneers Lacuna Coil elected to go harder, heavier and harsher with their latest album Black Anima. While that means they’re unlikely to follow their symphonic metal contemporaries Nightwish and Within Temptation into the UK’s arenas, it also comes as something of a relief to those of us who were concerned by their dodgy mid-career detour into poppier nu-metal territory. 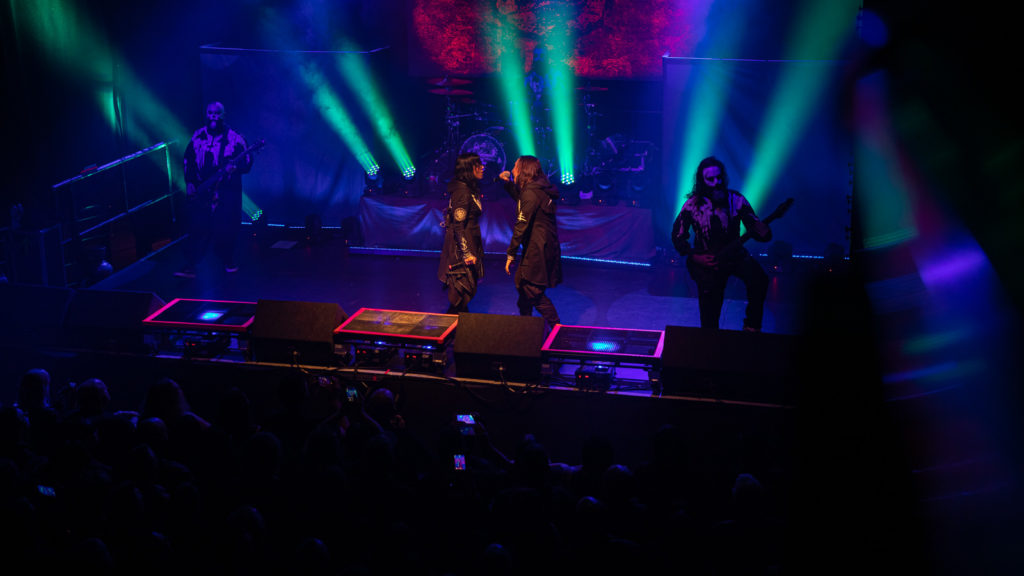 Freshly outfitted and mostly warpainted, they hit the stage running for a slick, fat-free career-spanning set beginning with Blood, Tears, Dust from the new album. Black Anima and its immediate predecessor, the mental health themed Delirium, dominate. Perhaps tellingly, however, they play nothing from 2009’s from Shallow Life. 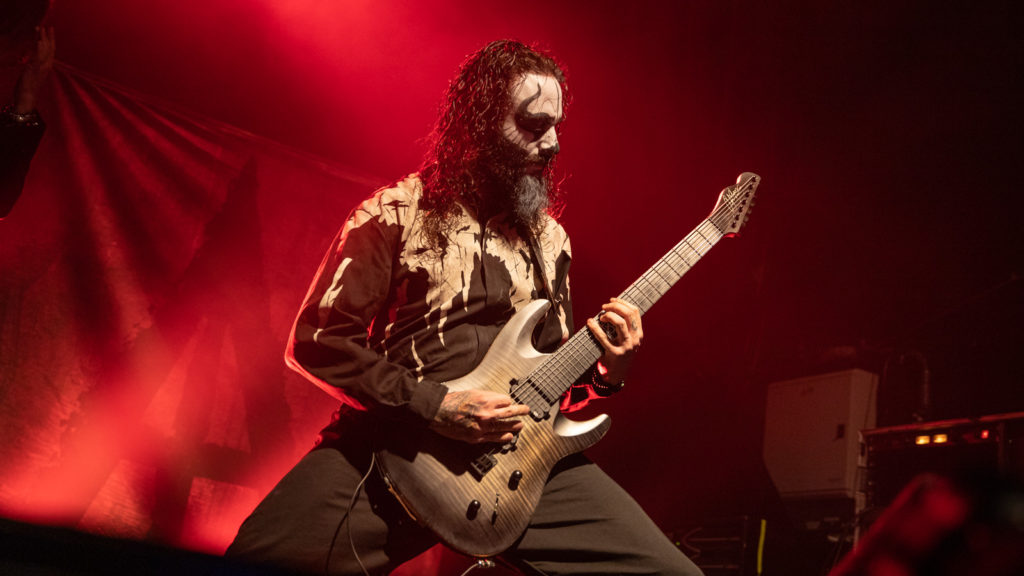 It’s safe to say that in all the band’s 20+ year history Cristina Scabbia’s voice has never sounded more powerful. Even after suffering a microphone failure during The House of Shame, she still manages to to hit each and every one of those incredible notes. 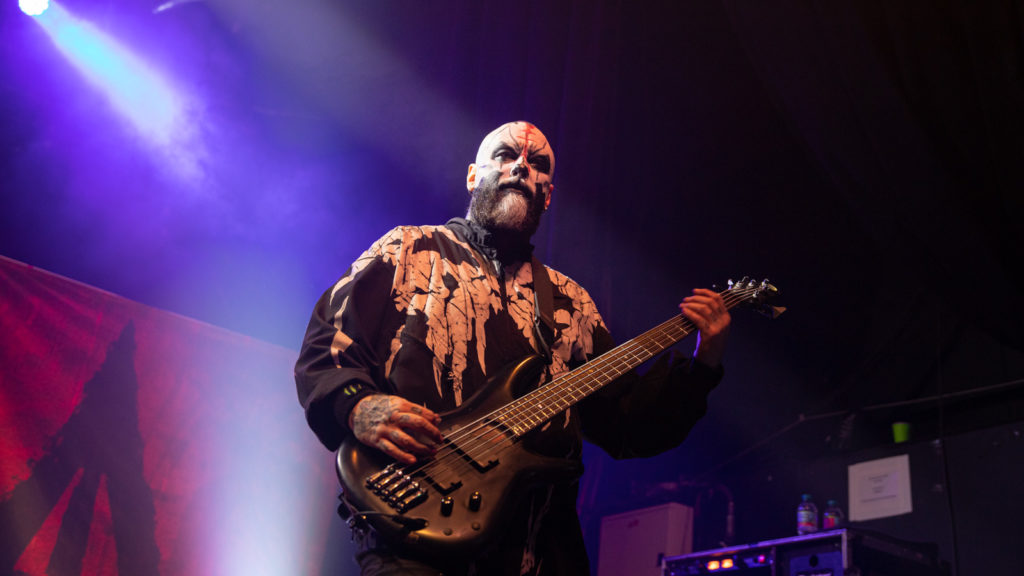 The band’s USP is that they’re the originators of what’s been described as the ‘beauty and the beast’ format, in which she trades melodic vocals with growlier Andrea Ferro to great dramatic effect. After some line-up ructions, it’s a relief to find that Diego Cavallotti is no slouch in the crunchy guitar department, while newest recruit Richard Meiz has slotted in well with his adrenaline-fuelled heavy drum patterns. 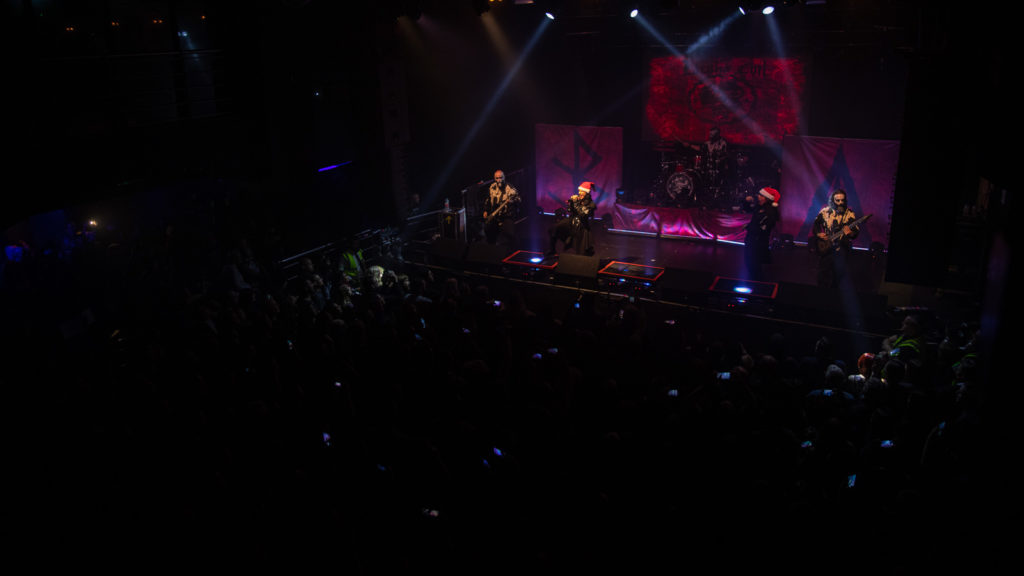 Lacuna Coil’s metallised version of Depeche Mode’s Enjoy the Silence has become something of a crowd favourite, but there’s a surprise in store when Cristina and Andrea bounce on in Santa hats for the encore. Before we have a chance to shout “Too early!” they launch in to Naughty Christmas, the band’s atypical bid for the Christmas novelty song market – which is, to be fair, more Krampus horror than Sid James, despite the title. It makes for an odd change of mood, but they swiftly recover by returning to the breakthrough Comalies album for those defining classics of goth-metal Heaven’s a Lie and Swamped. 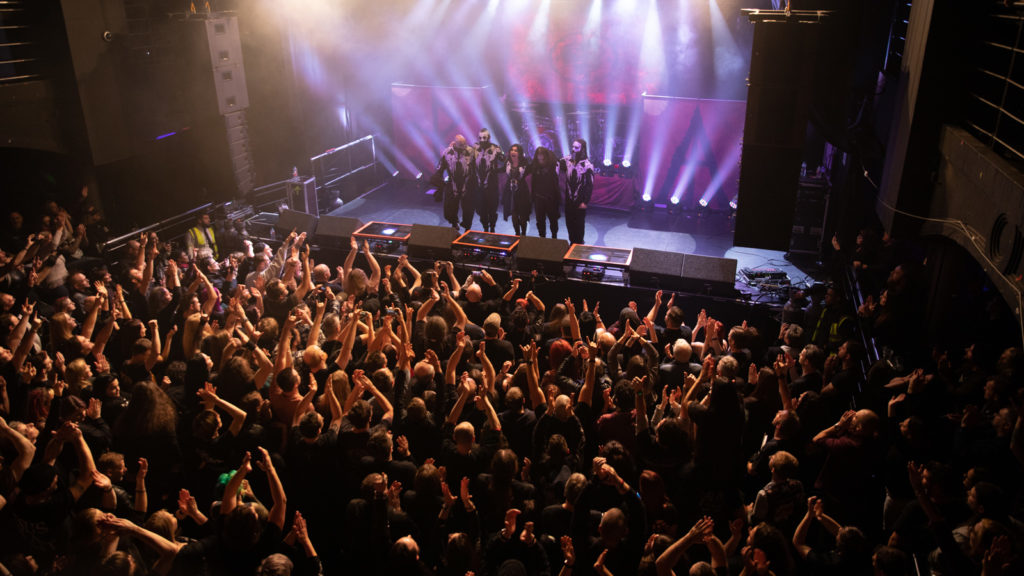 Not quite done yet, Milan’s finest conclude with a fiery Nothing Stands in Our Way. Needless to say, they play it like they mean it.