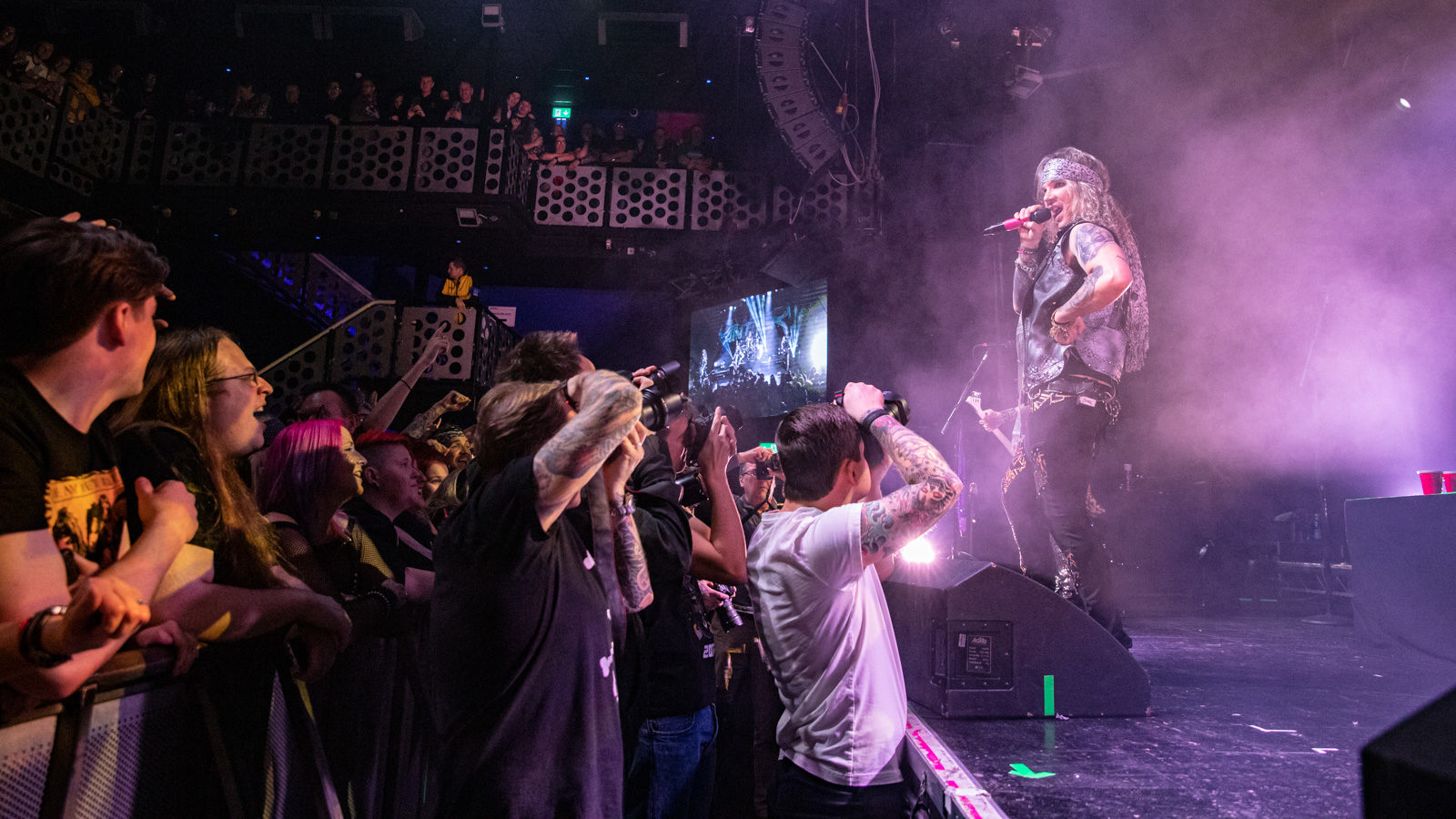 On paper this seems like an odd match. Wayward Sons’ increasingly political lyrics couldn’t be further removed from those of comedy metallers Steel Panther, which spring from, ahem, baser instincts.

Toby Jepson seems to spit Small Talk‘s line “I was born into Thatcher’s disaster” with even more venom each time he plays it. One can only imagine his pent-up fury at having to apologise for being English all the way across Europe during the band’s first post-Brexit tour. “I feel really angry now,” he apologises afterwards, with a grin. 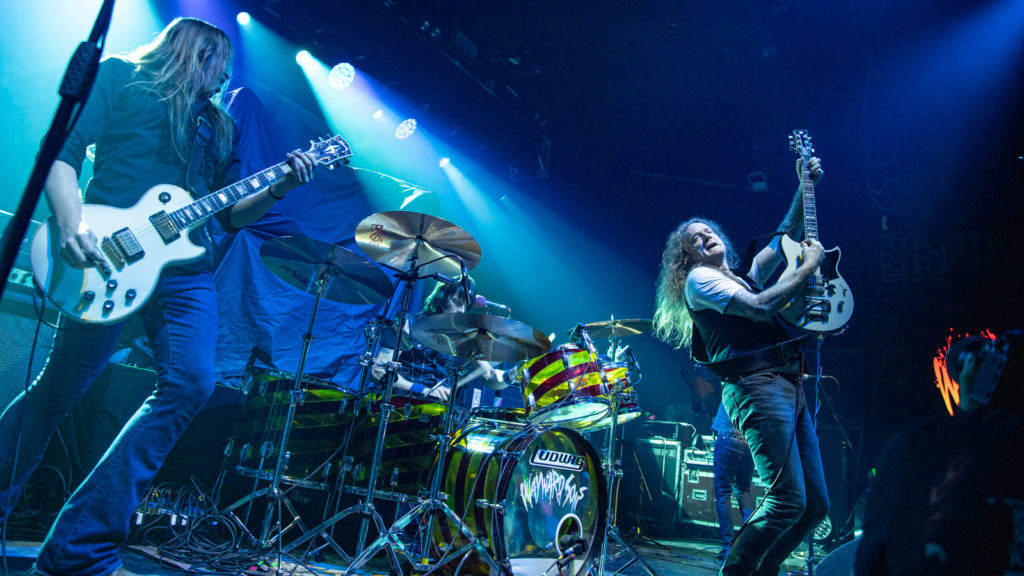 With two albums full of stonking hard rock choons, however, Wayward Sons can also be enjoyed by those who don’t listen to the words. Having hotfooted it from Antwerp at 3am (rock’n’roll, huh?) to play Toby’s home town, they might be forgiven for being rather listless. Instead, they attack the set with infectious, punkish energy. 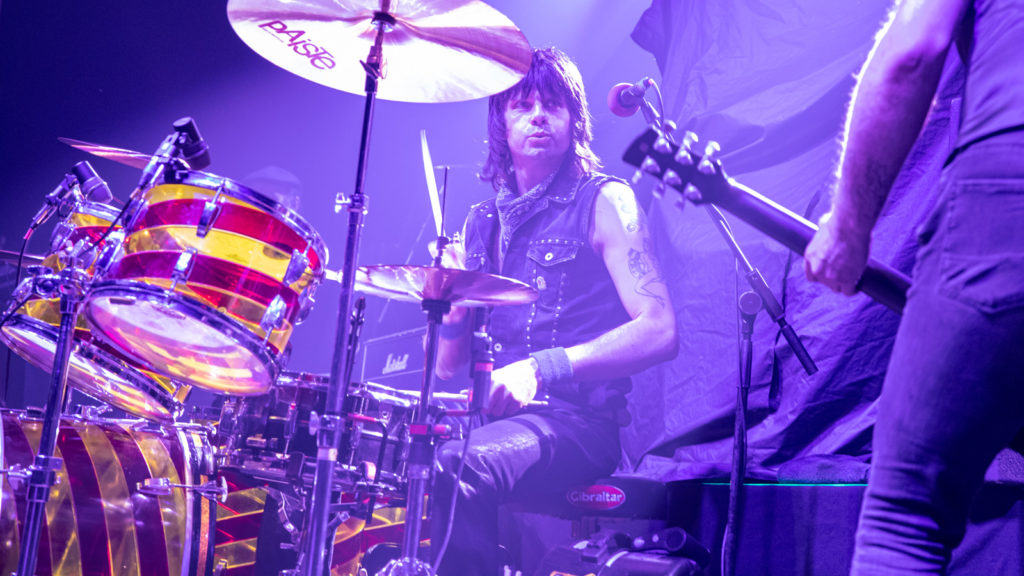 Under a little-known statute, it’s now actually illegal for any major rock band to tour the UK without Wayward Sons in tow. All that slog has paid off in a performance that’s as tight as a shameful Steel Panther sexual analogy, with Sam Wood channelling 1976 Scott Gorham, Phil Martini driving everything along from beneath his Nigel Tufnel/Cozy Powell memorial haircut, Nick Wastell still gurning as though it’s an Olympic sport and Dave Kemp bringing the flat cap back to rock. 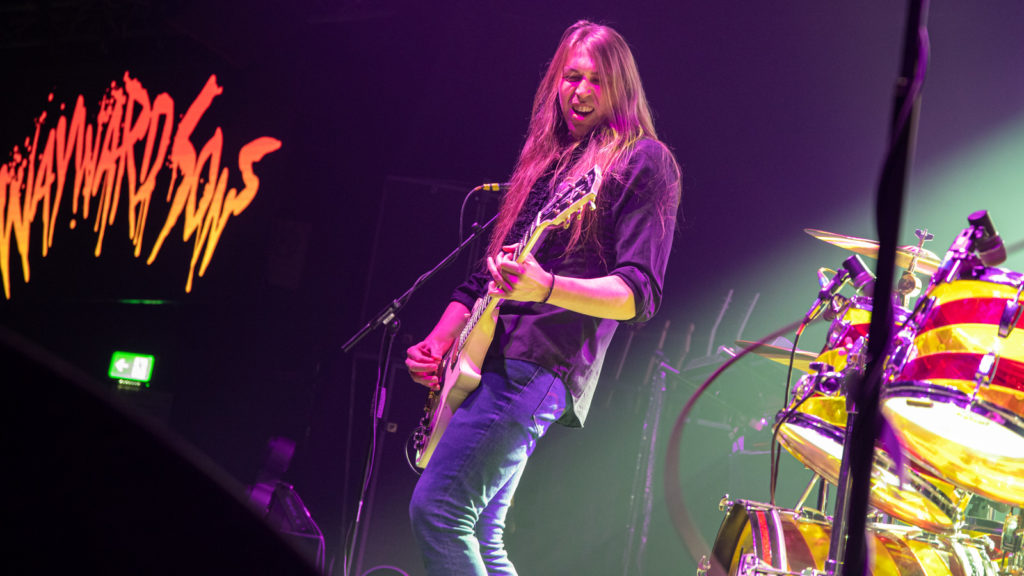 A generous 45 minute opening slot gives them the opportunity to mine that catalogue a little more deeply than usual, which means we get to hear the likes of As Black as Sin in addition to the crunchy, melodic Joke’s On You, Beatlesy Little White Lies and Zeppelin-esque Alive. But would it be too much to ask for (If Only) God Was Real? No matter, by the time they reach traditional set-closer Until the End with the entire packed audience on side, it feels like we’ve witnessed a headlining show. 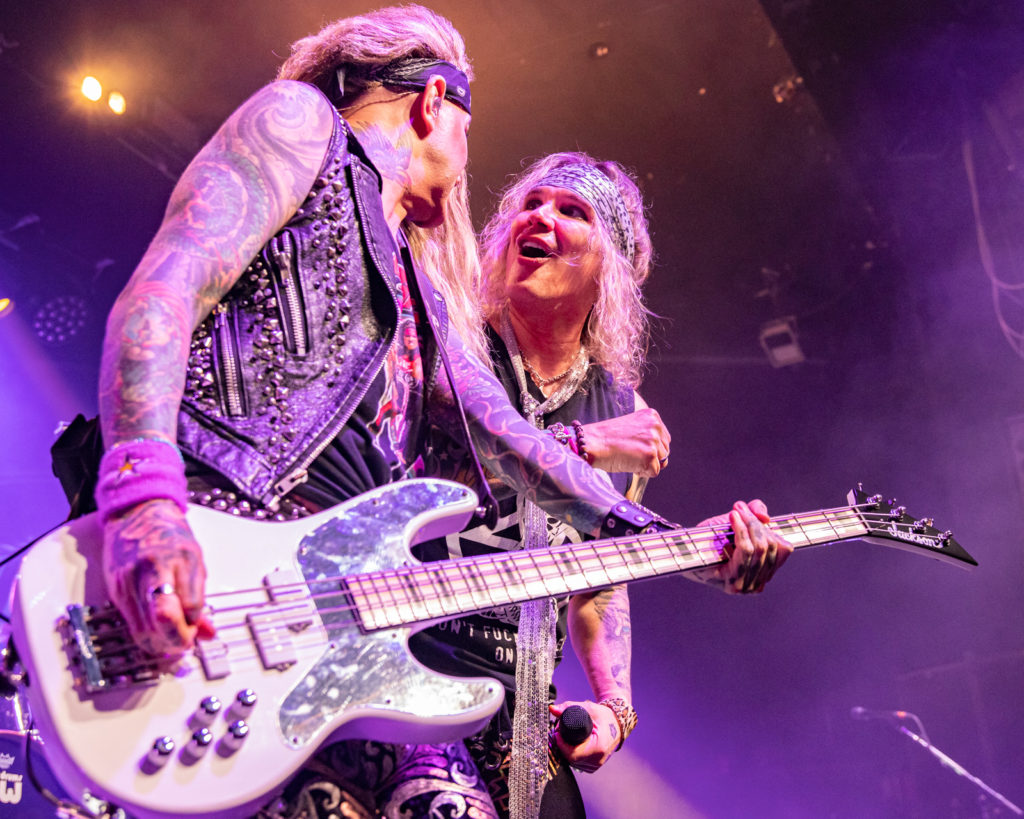 We haven’t, of course. Van Halen’s Everybody Wants Some!! signals the arrival of “the greatest heavy metal band in heavy metal” with Eyes of a Panther. Sounds familiar? Yep, that’s exactly the same way Steel Panther’s previous show at this very venue opened two years ago. Michael Starr and Satchel will spend plenty of time telling us how hard they worked on this all-new set, from the cheap backdrop to Stix’s impression of Rick Allen (hey – if you wanted good taste, you came the wrong place), while expressing genuine surprise that they’re still doing this shit after ten years. 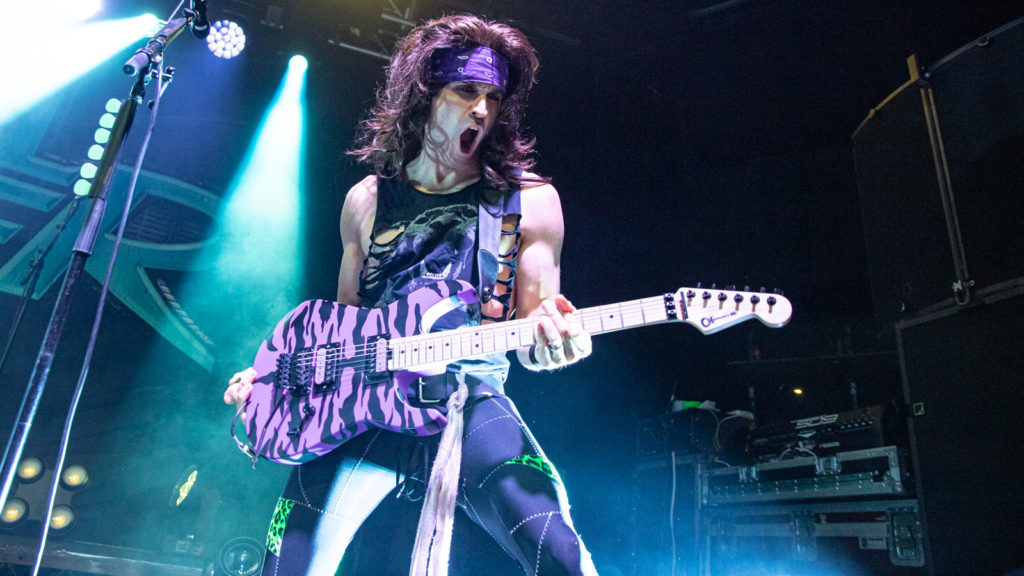 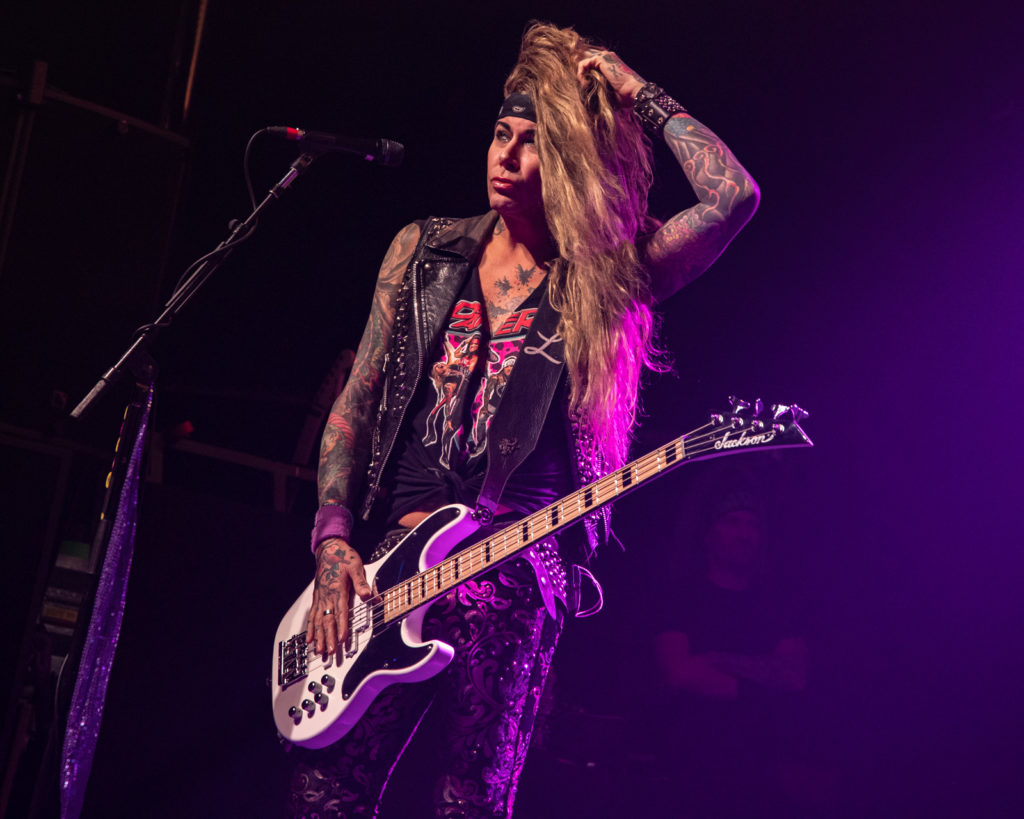 Lexxi will preen and pout in his personalised mirror and perform a fan-assisted ‘hair solo’. Gags will be cracked about Michael Starr’s age (“You wouldn’t think he was 74!”) and resemblance to a chubby David Lee Roth. (“At least I’m not the singer in Coldplay,” he responds, getting the biggest cheer of the night from this partisan audience.) 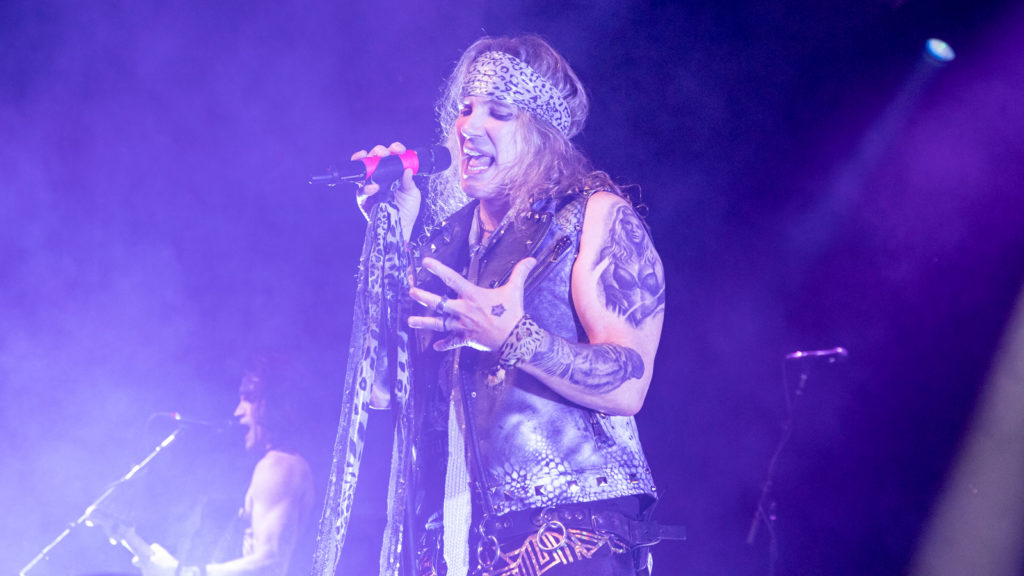 Satchel will leer and play a really rather good Steve Vai-esque guitar solo, born of his years of experience in under-the-radar metal acts (Fight, anybody?). And drummer Stix will be invited by his bandmates to clamber down from his kit to play keyboards during the power ballad interlude in the hope of securing some post-show lady action. (“Hey – if the dude who plays keyboards in Wayward Sons can get laid, you can too!”) 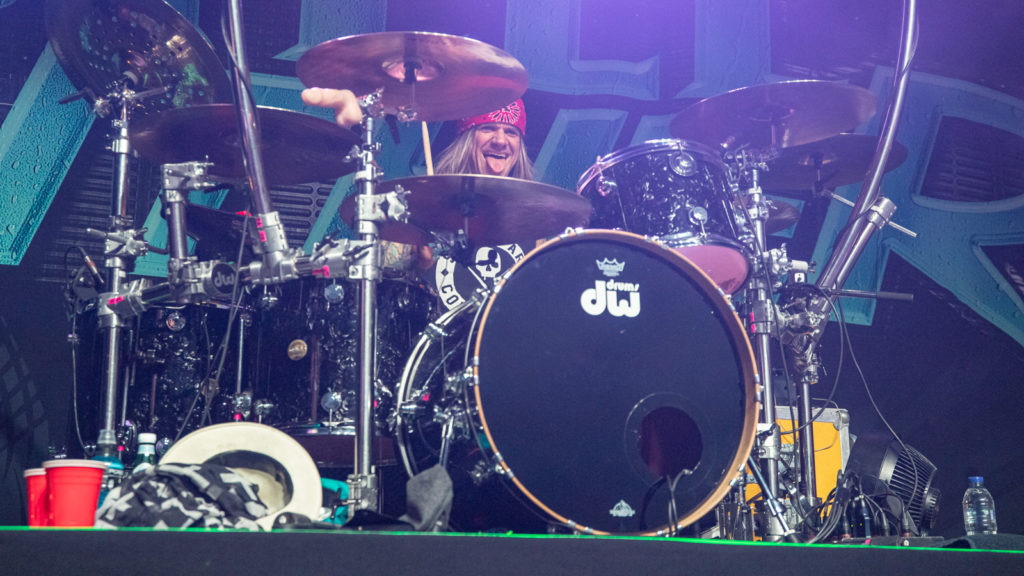 And as with all the best pantomimes, it’s the audience participation that helps make the show. As usual, preposterous hair metal wigs are in abundance and an all-too-willing young woman is plucked from the audience to be serenaded with Weenie Ride. An unseemly stampede ensues when others are invited to join her onstage for Party All Day (Fuck All Night) – actionably Bon Jovi-esque, but with a lyric the Poundland Springsteen would never dare write – and 17 Girls in a Row. 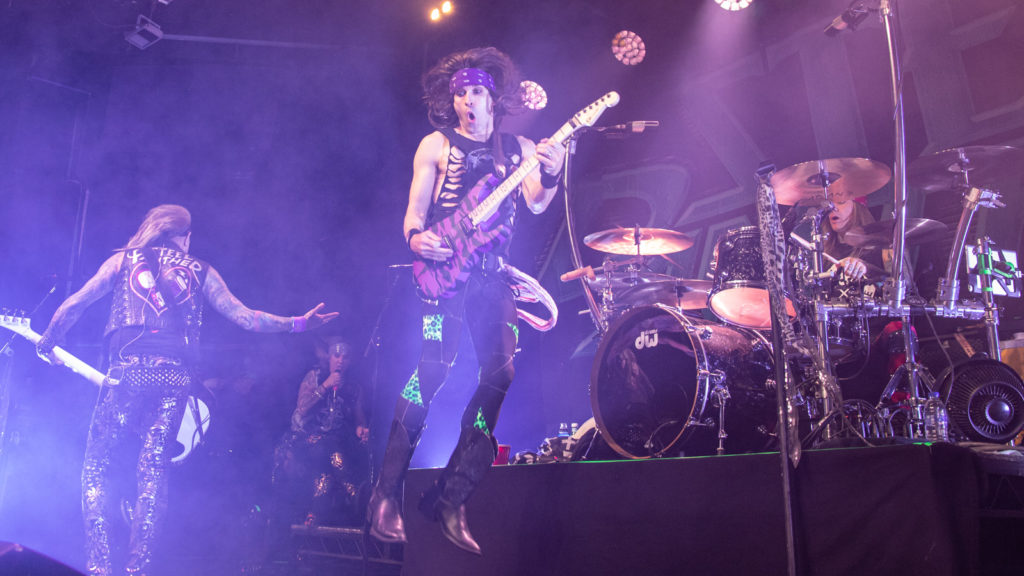 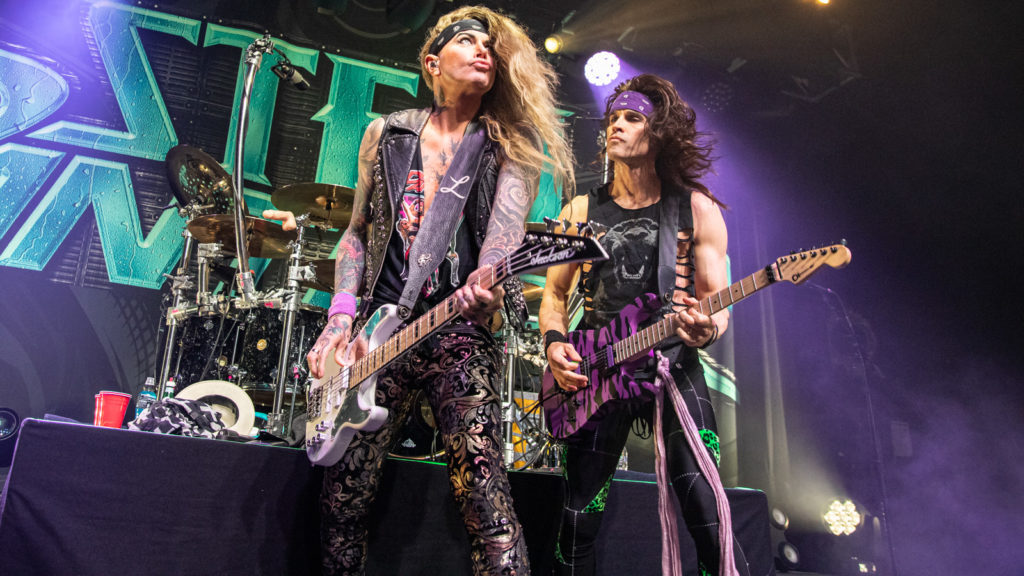 Weirdly, the best of these is the acoustic closing track I Ain’t Buying What You’re Selling, which not only seems out of place but doesn’t even sound like a Steel Panther song. Given a lyrical tweak and an earnest delivery, it could even be the work of one of those sulky grunge dudes who committed the ultimate crime of killing off hair metal. 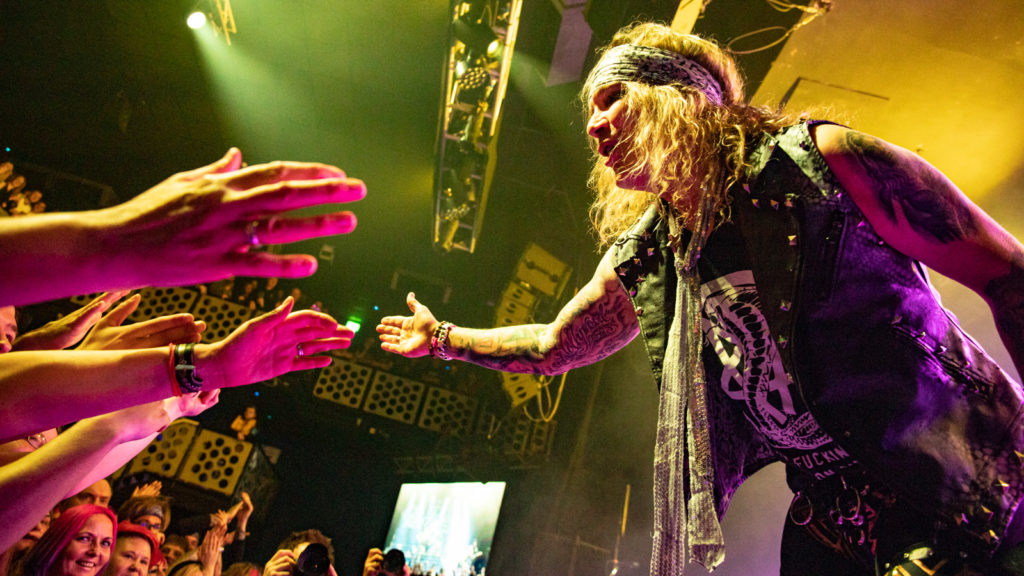 Inevitably, it’s all those fan favourites from debut album Feel the Steel – Death to All But Metal, Asian Hooker, Community Property, etc – that get the biggest audience response, though there’s a moment that can only be described as surreal when they’re joined on stage by their own tribute act – Surreal Panther, obviously – whose singer really can do all the Michael Starr-via-David Lee Roth shrieks and whoops. Nobody shouts for Steel Panther to return at the end of the show. Instead, we all bellow for the song we know is coming next – the commendably egalitarian Gloryhole (“No one judges you at the gloryhole”) – before they depart with that inspiring social message: “Cocaine is good for you!” Aladdin was never this much fun.