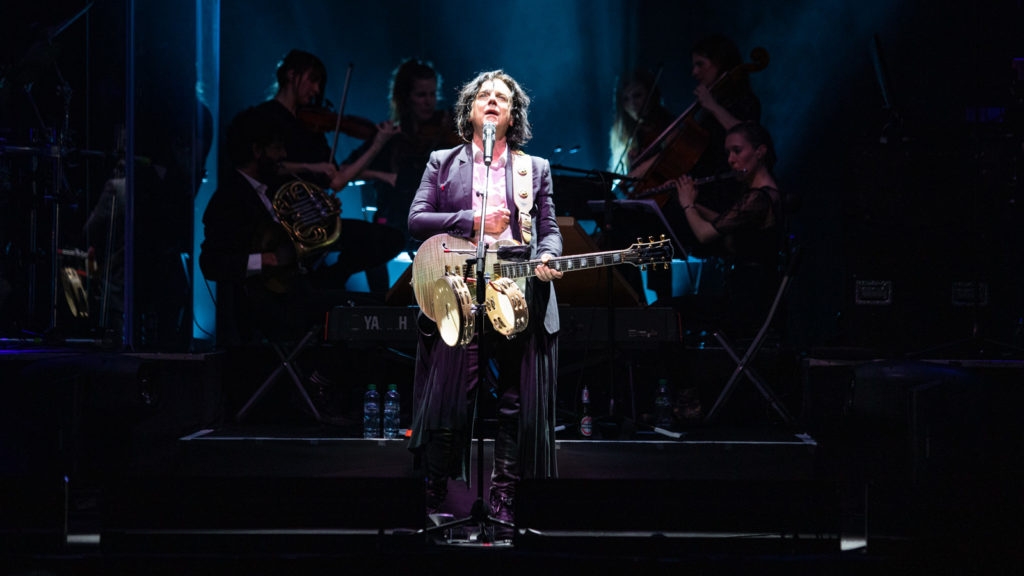 Yes, if Marillion were a political party, they’d be . . . The Liberal Democrats. Steve Hogarth makes clear his admiration for Jo Swinson while inviting us to enjoy Belgian string quartet In Praise of Folly “before they’re banned”. (He once fronted a band called The Europeans, you know.) Whether this endorsement will help the LibDems to hold on to their Bath seat at the General Election remains to be seen, but the veteran proggers are in feisty, take-no-prisoners mood in their 40th year – nearly half of which has been spent as a hugely successful, trail-blazingly independent entity, free of record company control. 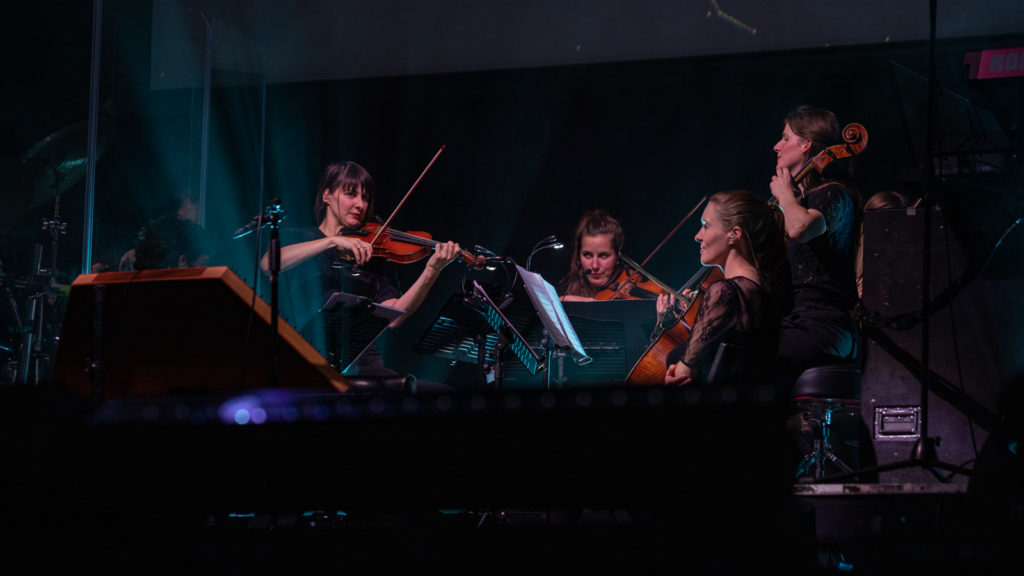 Bands seeking to rework and reinvigorate their back catalogue have a relatively limited range of options. Marillion have already done the acoustic thing (Less Is More) and even endorsed a controversial trance remix album (Tales from the Engine Room). That leaves the orchestral makeover. It’s easy to get the balance wrong with such ventures, the orchestra either sawing and parping away inaudibly in the background or swamping the songs with overblown arrangements on the grounds that “we paid for the buggers so we might as well get our money’s worth”. 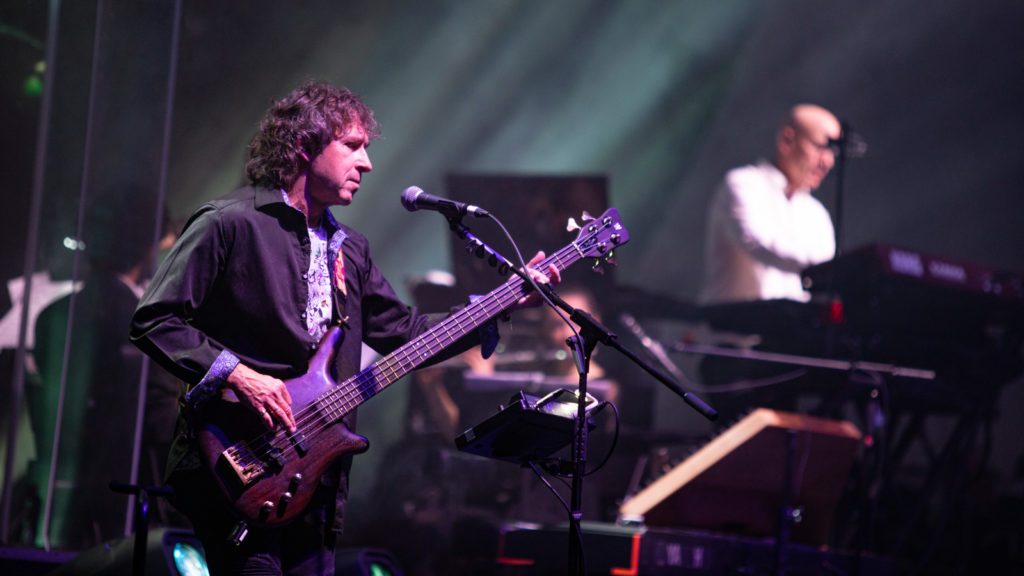 Marillion took a slimmed-down approach at their 2017 Albert Hall show, which continues with the With Friends from the Orchestra album and this accompanying tour. Sandwiched between Ian Mosley’s (acoustically shielded) drum kit and Mark Kelly’s keyboards on the ornate Art Deco Forum’s large stage, the quartet are joined by Sam Morris on French horn and Emma Halnan on flute. 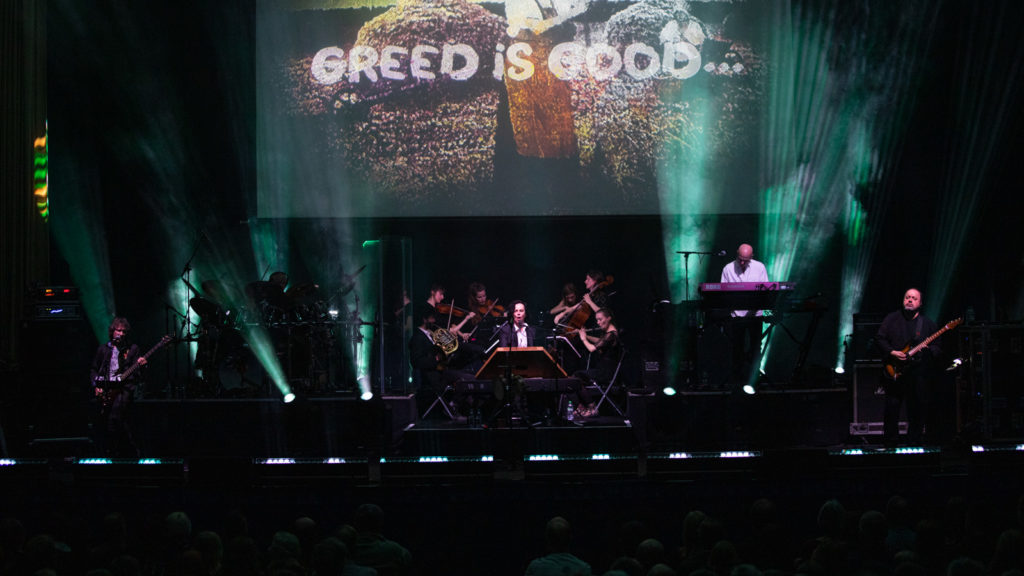 There’s no fannying about once everyone is in position. In fact, it’s hold on to your seats time as they embark on all seventeen minutes of Gaza, the band’s first foray into overtly political territory and the closest they get to heavy metal, which now sounds even more ominous with the input of the orchestral sextet. 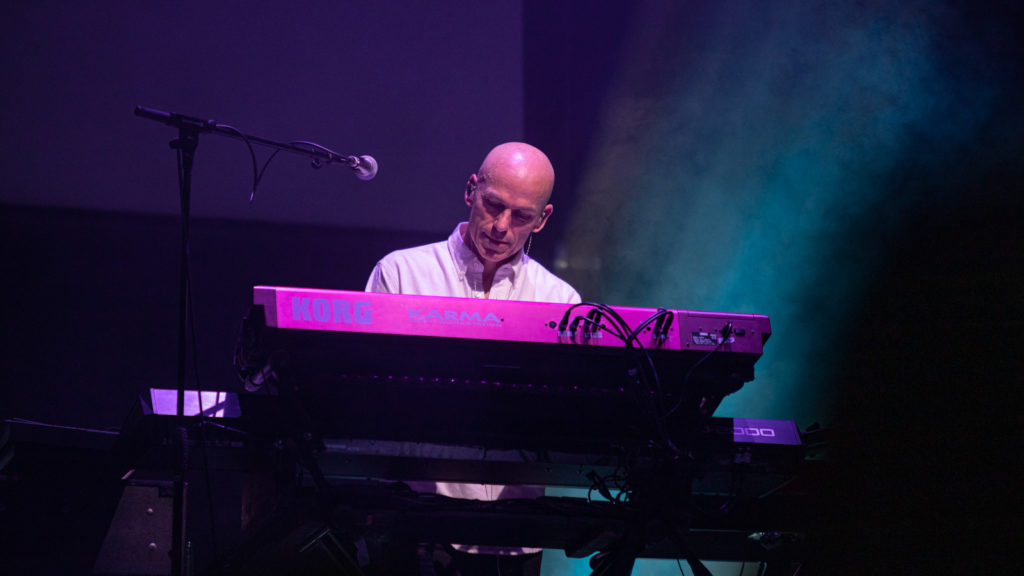 The mood is lightened with the title track from Afraid of Sunlight. Who’d have thought we’d ever hear that with a French horn solo? And why aren’t there more French horns in rock? The Fabs and the Stones were fond of them in the sixties, but French proggers Lazuli seem to be the only band using the instrument on a regular basis these days. 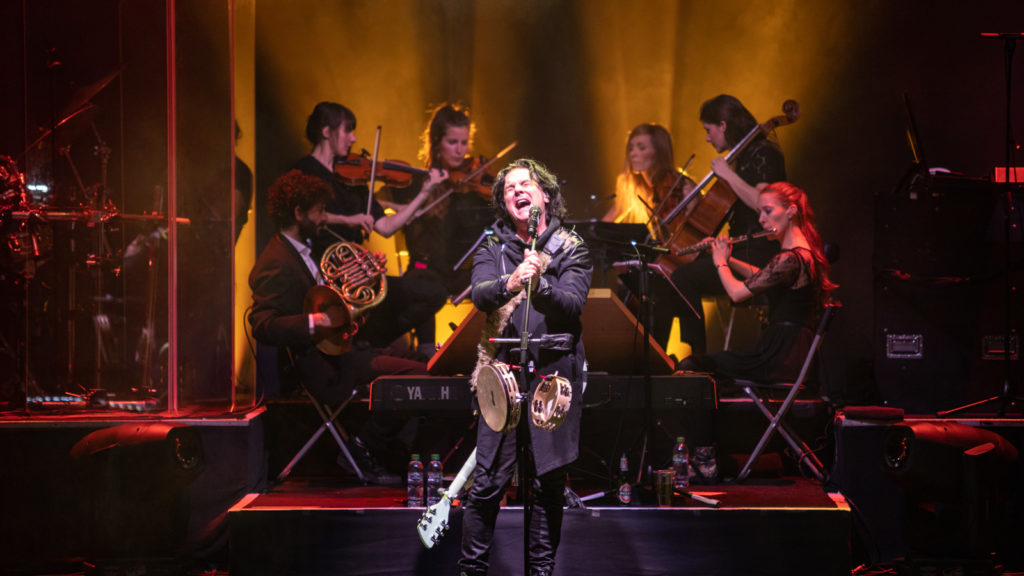 The set list spans Hogarth’s 30 year tenure (that’s right – he’s fronted Marillion three times longer than that garrulous Scottish fella), with a well-chosen selection from Seasons End all the way to Fuck Everyone and Run. Rather than take the easy route of simply relieving Mark Kelly of the heavy lifting, the classical musicians are used to enhance and augment the songs. So the stark Hollow Man from Brave acquires an additional layer of complementary orchestration, while the lovely Estonia is subtly deconstructed and rebuilt with a new intro from the string quartet. 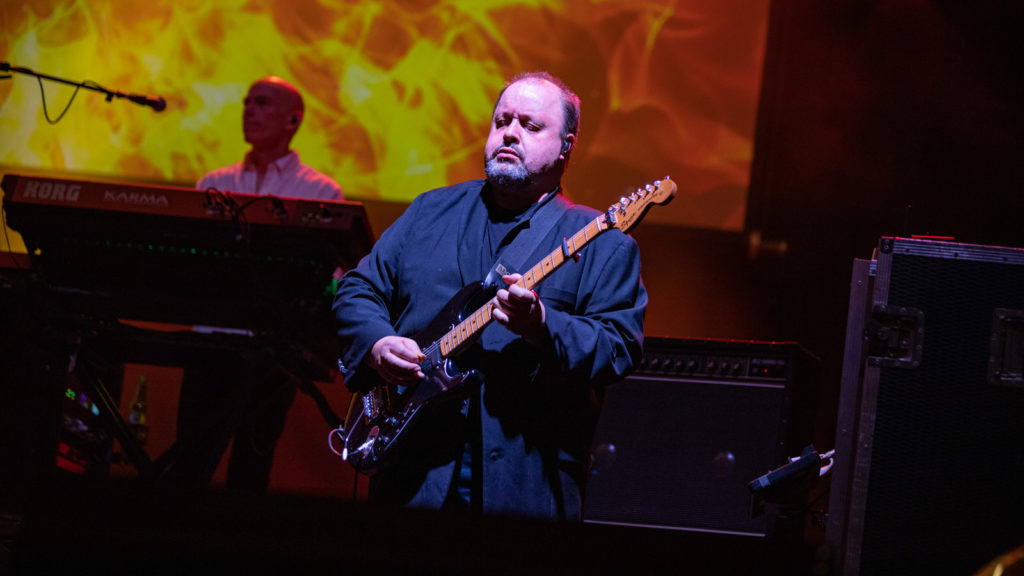 As ever, Steve Rothery seems lost in his own private reverie as he contributes those sublime, tasteful Gilmour-esque solos, while on the other side of the stage animated cheeky chappie bassist Pete Trewavas shoulders comic relief duties. Commanding ringmaster Hogarth is in fine voice as he wields that bizarre MIDI cricket bat, with patter that occasionally takes a turn for the surreal. 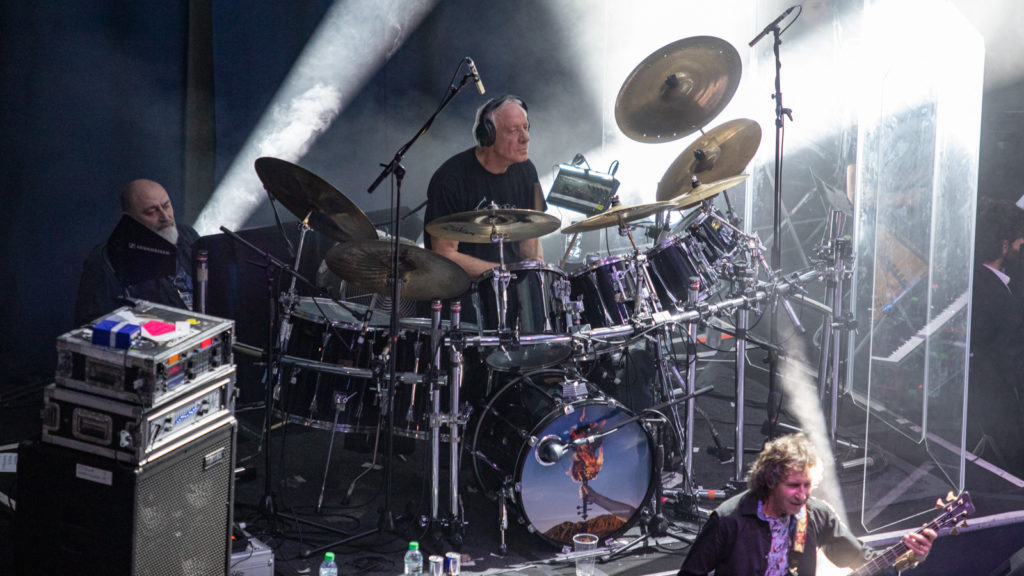 The only disappointment of Marillion’s Colston Hall performance last April was that they didn’t play Fuck Everyone and Run‘s standout epic The New Kings, which tackles oligarchs, trickle-down economics, ‘too big to fail’ banks, council house sell-offs and fake news, while yearning for “a national anthem you could sing without feeling used or ashamed”. Tonight we get the full multi-media works, which proves to be the show’s highlight. 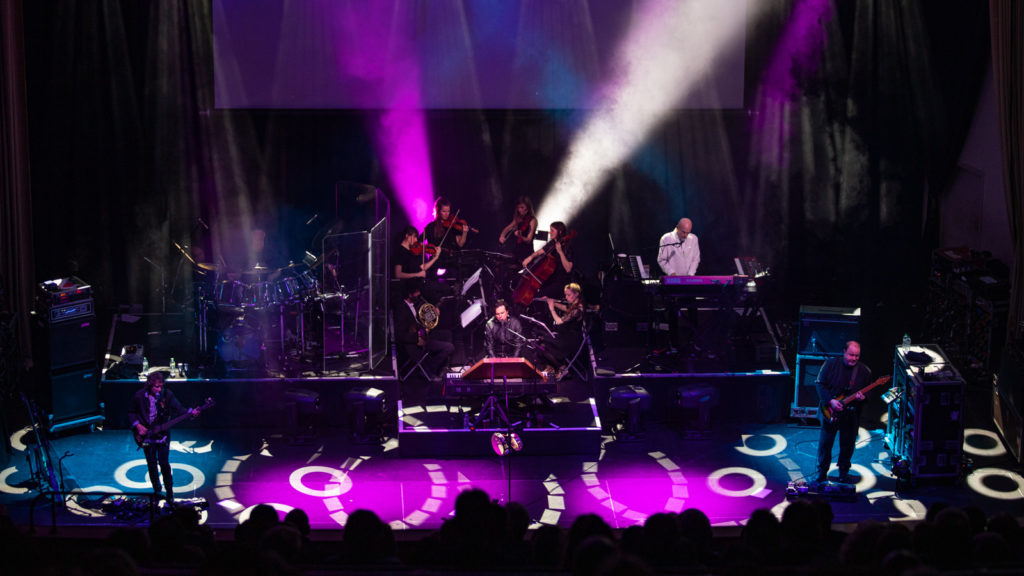 The first of two lengthy encores concludes with the rockin’ Separated Out, which brings the capacity crowd to their feet. Rather brilliantly, the In Praise of Folly quartet also leap to their feet halfway through for a brief detour into Led Zep’s Kashmir. Than it’s back to the This Strange Engine album for a storming rendition of the lengthy title track. 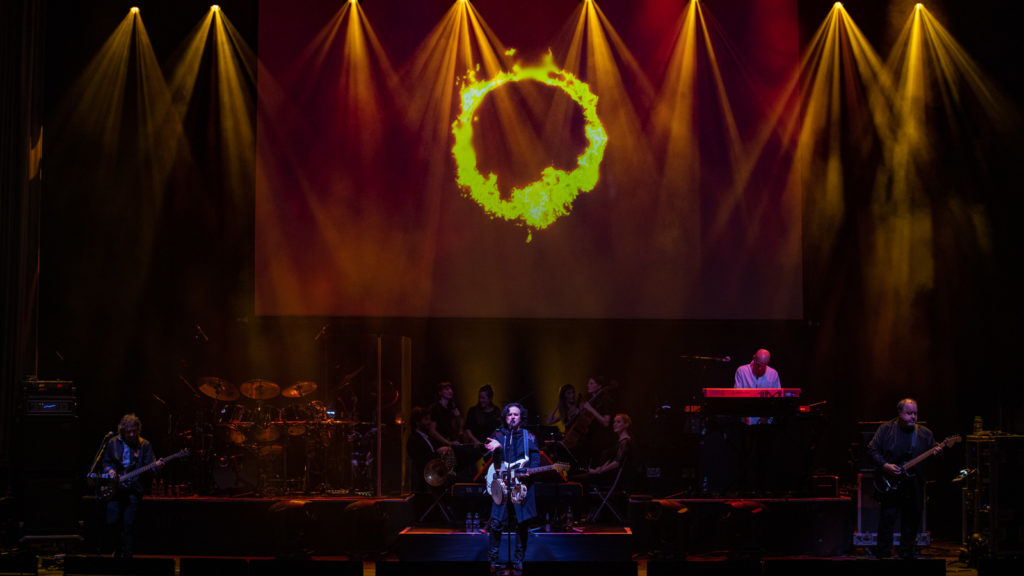 Quibbles? Well, getting the correct sound balance between acoustic and electric instrumentation is always a challenge. For the most part it works magnificently tonight, but if anyone loses out it’s Emma Halnan whose flute is occasionally lost in the mix. And it might have been wise to swap Separated Out and This Strange Engine to avoid having to haul the audience out of their seats for a second time at the end of the show. But these hardly take the shine off what must otherwise be judged a triumph.