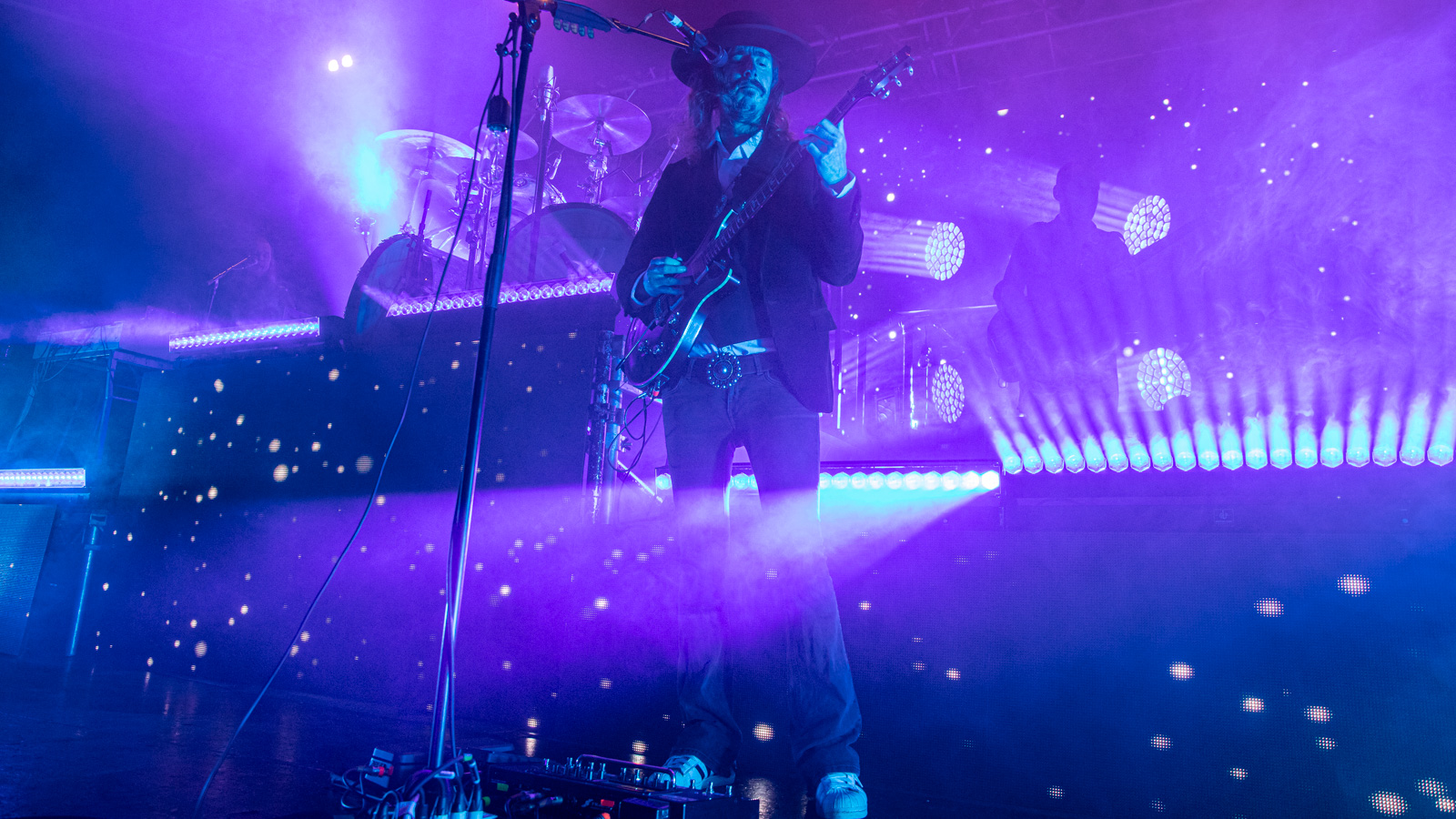 It’s not hard to see why Icelandic trio The Vintage Caravan appealed to Opeth mainman and notorious ’70s vinylhead Mikael Åkerfeldt. Their brand of heavy prog/psych blues rock could have emerged at any point over the past 50 years.

But while there’s no shortage of second-rate acts operating in this genre, The Vintage Caravan are streets ahead of much of the opposition with their propulsive, high-energy performances and rapidly evolving songwriting. 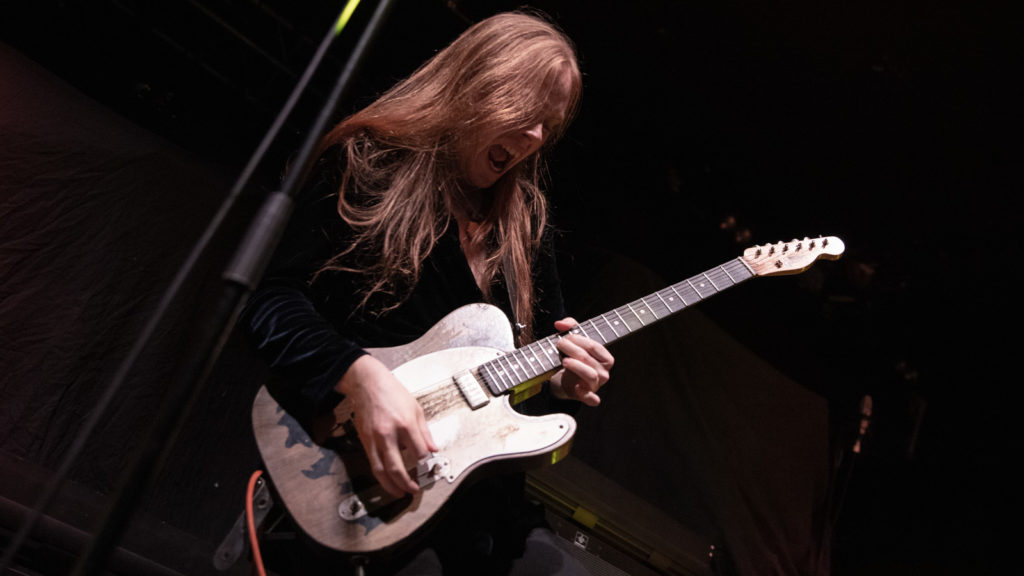 Physically constrained by the headliner’s mountains of gear, hair-flailing guitarist Óskar Logi Ágústsson and the ultra-tight rhythm section of bassist Alexander Örn Númason and drummer Stefán Ari Stefánsson nonetheless rock up a storm that has the packed crowd fully onside by the time they reach the catchy On the Run, which builds to a full-on delirious guitar wig-out before looping back to the chorus. 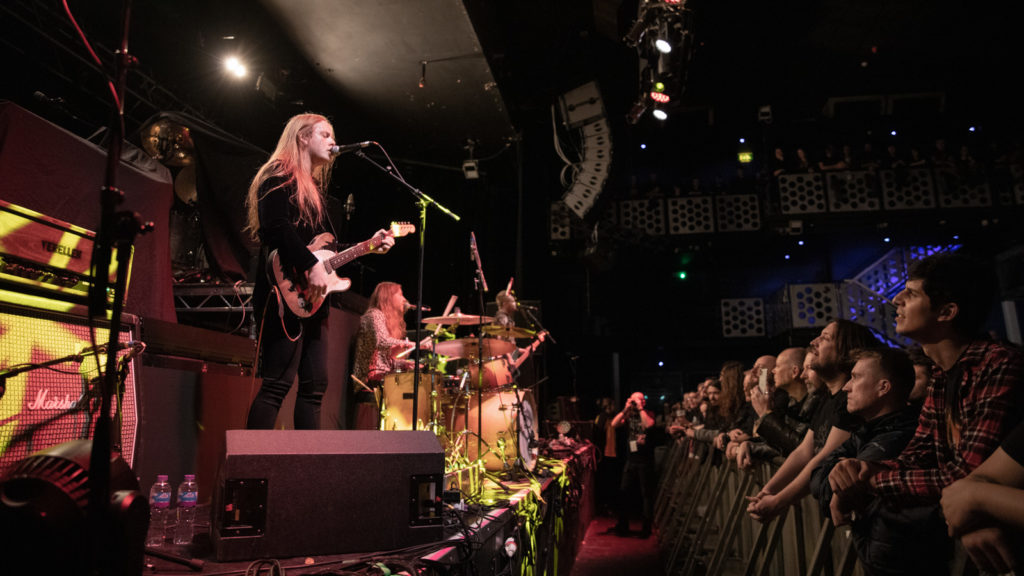 The crunchy Reset is another highlight, which also benefits from three-part vocals that make up for the fact that Ágústsson is an adequate rather than exceptional singer. 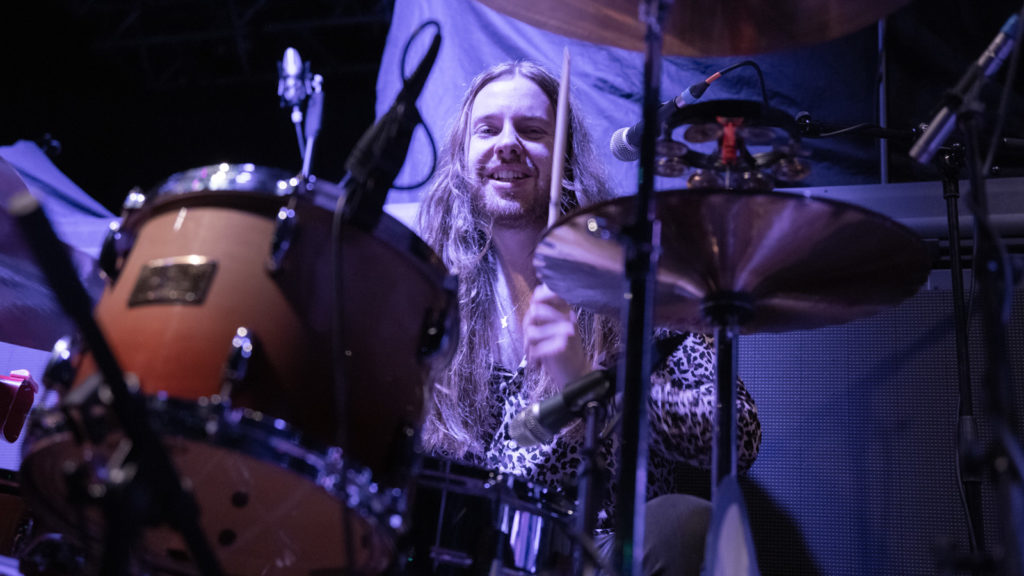 It’s a feature of Opeth tours that the support acts become infected by Mr. Åkerfeldt’s drollery (remember Enslaved’s glowering Grutle Kjellson coming over all unexpectedly chucklesome on their last visit to Bristol?). The Vintage Caravan are no exception, with Númason threatening at one point: “This next song may contain a bass solo. There’s nothing you can do about it.” 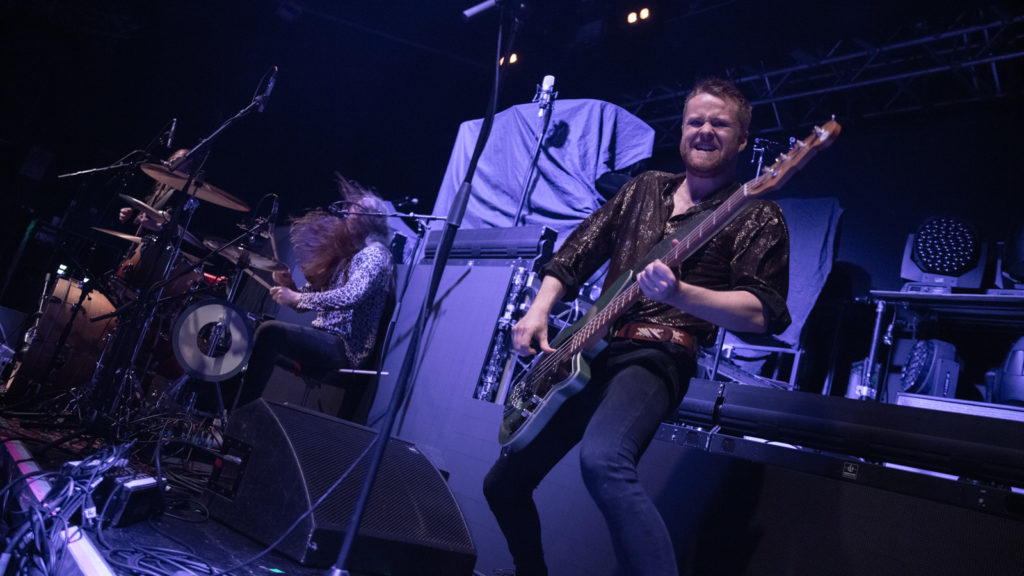 But what do you do when you break a string and suddenly realise that your spare guitar is on the opposite side of the stage with no clear path to reach it? Ágústsson bounds into the pit and scuttles off, leaving his bandmates to entertain us with drum and bass (not that sort), which initially threatens to derail psych noggin-blower Expand Your Mind. But he returns in time to hitch a ride on the epic groove all the way to the frenetic climax. Oddly though, they elect not to play their proggiest song, Innerverse, to this captive audience. 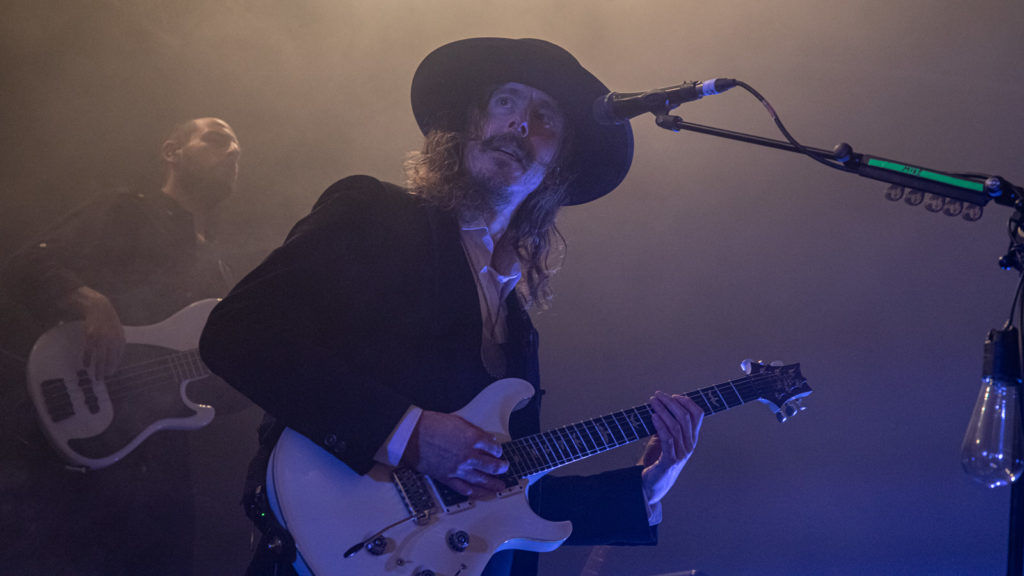 “Have my babies!” shouts an over-excited, clearly rather confused woman, who’s presumably no stranger to the demon alcohol.

“Have you brought them?” replies ever-droll Mikael Åkerfeldt, without missing a beat.

This is not the kind of peculiar request you expect to hear at the average prog-metal gig. But then Opeth are not your average prog-metal band. Come to that, they weren’t your average death metal band earlier in their career either. Instead, they’re one of a handful of acts who’ve managed to carve out a niche for themselves by doing whether the fuck they want, knowing that their huge, loyal, open-minded audience will come along for the ride. That’s right: file alongside Devin Townsend. 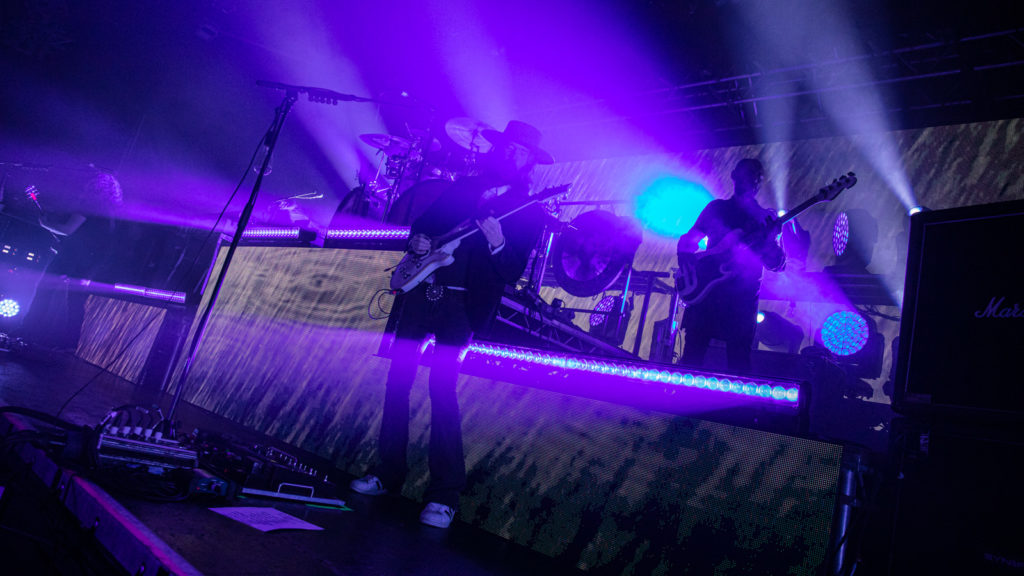 While we’re on the subject of gestation, the way Åkerfeldt has described the creation of latest album In Cauda Venenum makes it seem rather like one of those women who suddenly give birth without knowing they were pregnant. He’d intended to take a lengthy sabbatical and then, unexpectedly, out it popped. He should get knocked up in this way more often. 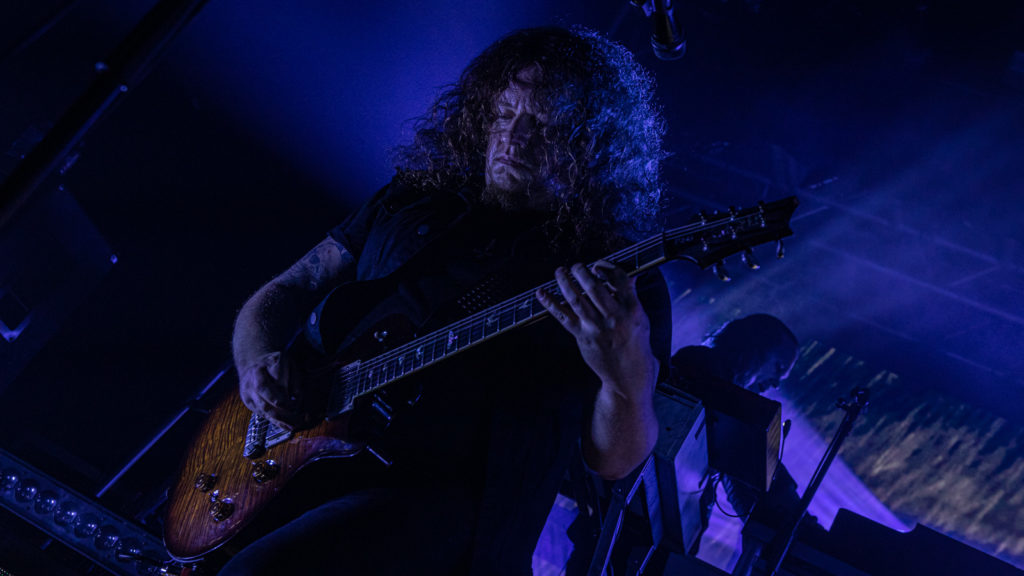 The Popol Vuh-meets-Tangerine Dream sounds of album opener Livets Trädgård, which comes across like an alternate universe Stranger Things theme or the score to a lost giallo flick, provides an atmospheric opening, with Opeth making full use of the Academy’s video screens for the first time to display suitably ominous imagery.

As on the album, Svekets Prins follows: a rich and nourishing stew whose flavours range from raging metal to fiddly prog, with a spectacular Fredrik Åkesson guitar solo and no shortage of those little musical references that Åkerfeldt chucks in seemingly so the sad old bastards among us can enjoy the frisson of recognition (guilty! – check the falsetto harmony vocals straight from the Uriah Heep songbook). And although the album was released in both English and Swedish language versions, it’s the latter that the frontman chooses to sing on all three songs from it that are aired tonight. This newer material also sees keyboard player Joakim Svalberg coming more to the fore, and it’s not hard to spot the range of influences from Rainbow to Gentle Giant in his multi-faceted playing. 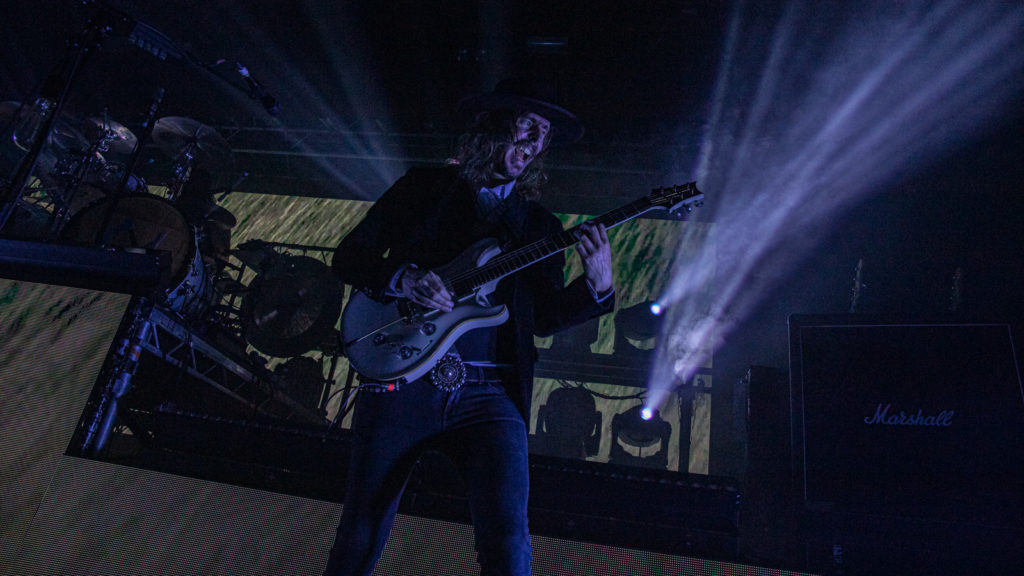 Grumpy old-schoolers have been known to bemoan the absence of death metal and growled vocals from the last few Opeth albums as the band skip merrily into progland. But they always delve back into this stuff on stage, much to Åkesson’s evident delight. The Leper Affinity from Blackwater Park is received with a huge cheer and not a little air drumming as punters try to keep up with Martin Axenrot, who’s perched atop a huge drum riser and still has to endure cries of “Legolas!” 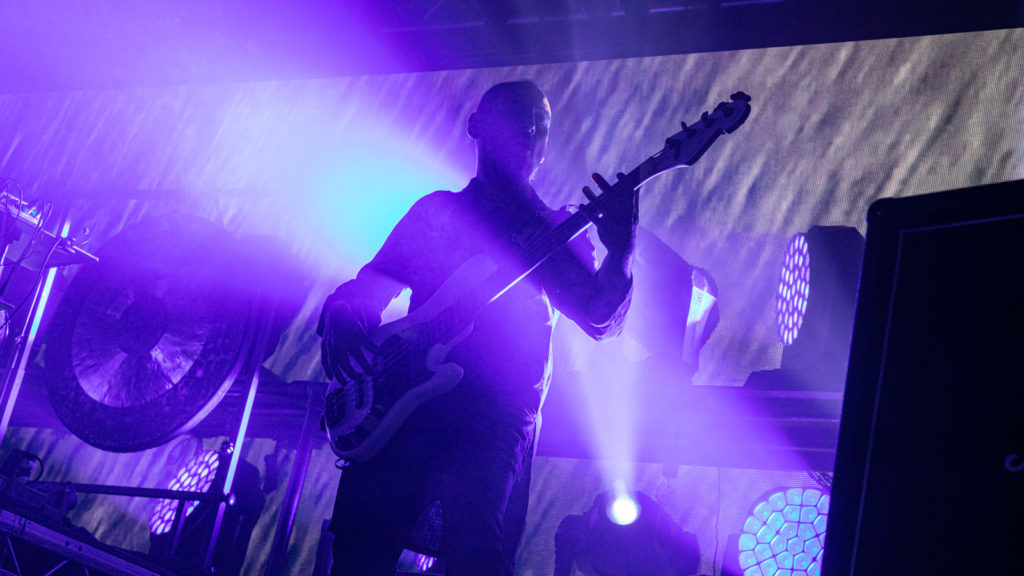 Sporting a rather amusing hat and droopy moustache combo that makes him look a little like a seedy bandit from a cheap spaghetti western, Åkerfeldt’s growing confidence as a singer sees his vocals placed ever higher in the mix. He’s also developed a new technique for dealing with hecklers and endless demands for obscure tracks from the Opeth catalogue: bellowing “Order!” in imitation of John Bercow. 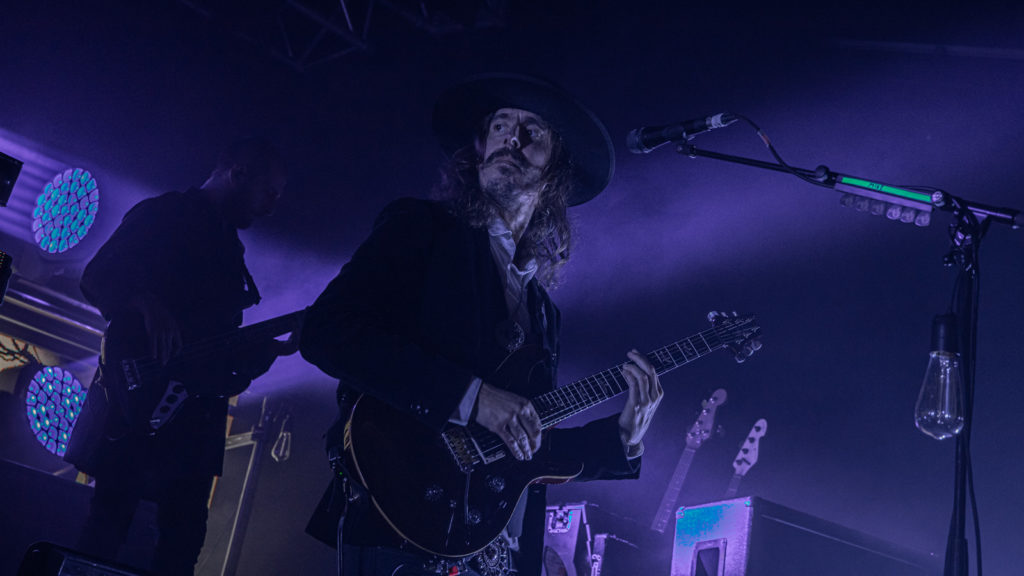 Impressively, there’s little overlap with the set list from the last time Opeth played here as they mine their oeuvre for some lesser-exposed songs, such as the sublime Moon Above, Sun Below, none being more out-there than the fiendishly complex Nepenthe from Heritage which sees them going full jazz, complete with tricky time changes. This also underlines the versatility of long-serving, unassuming Uruguayan bassist Martín Méndez, who remains very much Opeth’s secret weapon.

The encore brings the title track from Sorceress, which has become a fan favourite in a remarkably short period of time, and, finally, the obligatory, magnificent Deliverance, whose thrilling precision stop-start climax is Opeth’s way of saying: “That’s it. We’re done for tonight. Nothing can follow this.”