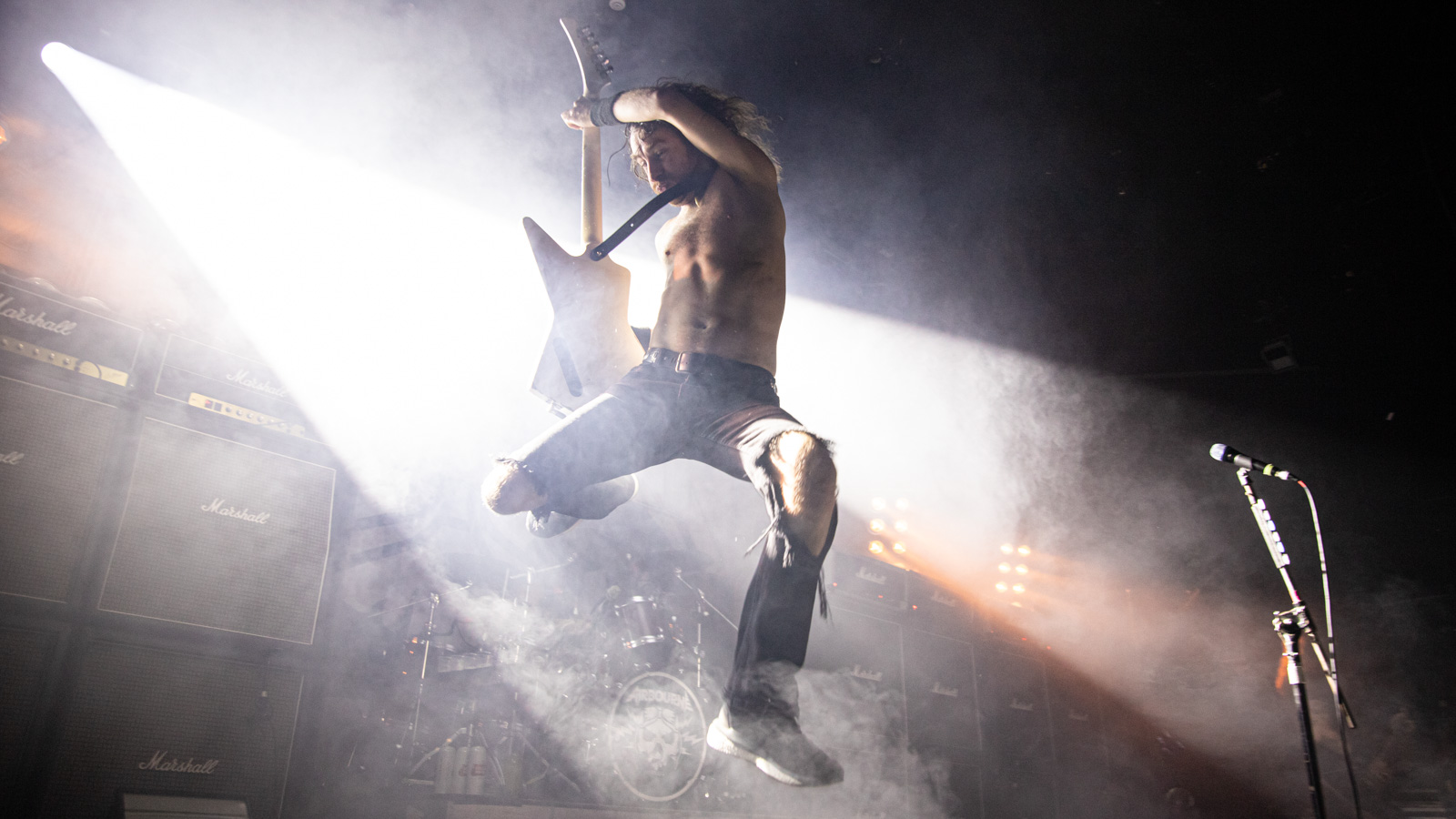 You know you’re in for a good evening when Tyler Bryant & the Shakedown are the support act. Any headliner prepared to come on after the twentysomething Nashville rockers has to be pretty damn confident in their ability not to be upstaged. 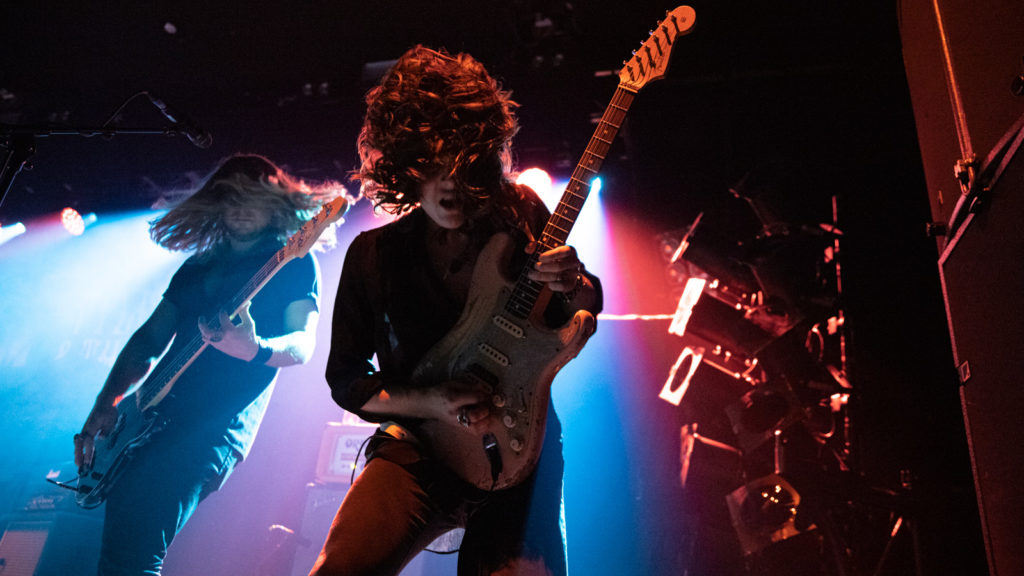 Initially stymied by record company issues, the Shakedown’s ascent hasn’t been as rapid as it ought to have been. But as we discovered when they last played here supporting the Cadillac Three, they’ve honed their craft as a formidable live act. 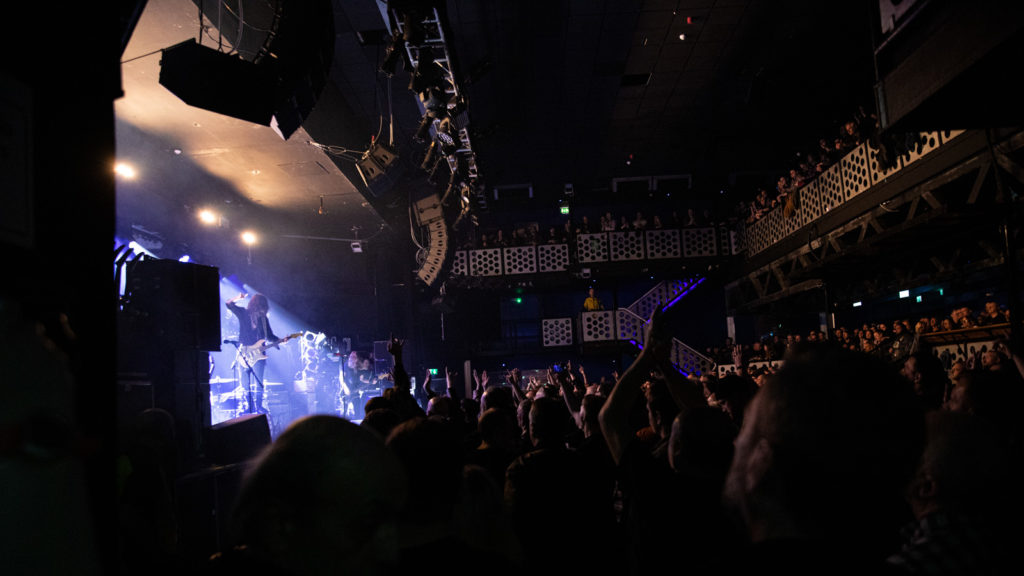 If you only knew Tyler’s CV (teen guitar prodigy, winner of the Robert Johnson award, mentored by bluesman Roosevelt Twitty, championed by Jeff Beck and Eric Clapton), you might be forgiven for expecting the Shakedown to be a Jools Holland-friendly tasteful snoozathon. Not a bit of it. Clearly tailoring their set to the occasion, they come out rockin’ with Drive Me Mad, Tyler himself working up a frenzy of headbanging. Weak and Weepin’ is a real firecracker of a song, built upon a dirty, insistent Graham Whitford riff that suggests that he’s been paying close attention to his dad’s (that’s Aerosmith’s Brad) early oeuvre. 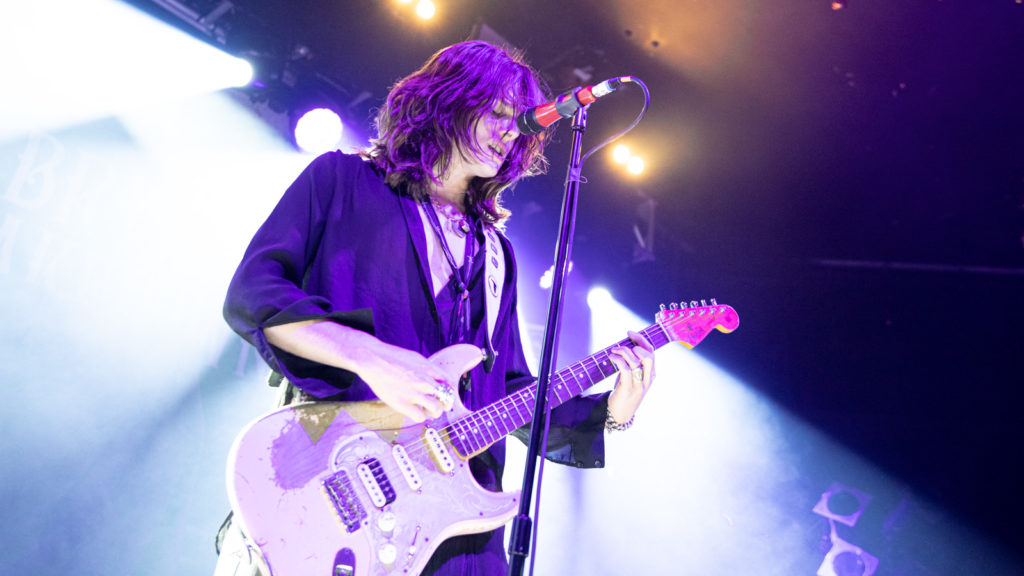 In any normal band, Whitford would be the star guitarist. But Bryant’s name is up there for a reason, as he demonstrates when he switches to slide guitar and whisks us back to where he began in Paris, Texas, with a suitably smoking rendition of Arthur ‘Big Boy’ Crudup’s That’s All Right – as popularised by Elvis and Led Zep. Unable to contain himself behind his kit, Caleb Crosby grabs his bass drum and bounds to the front of the stage to beat out the rhythm. Half an hour or so of Shakedown fever really isn’t enough. We need a proper headlining tour. 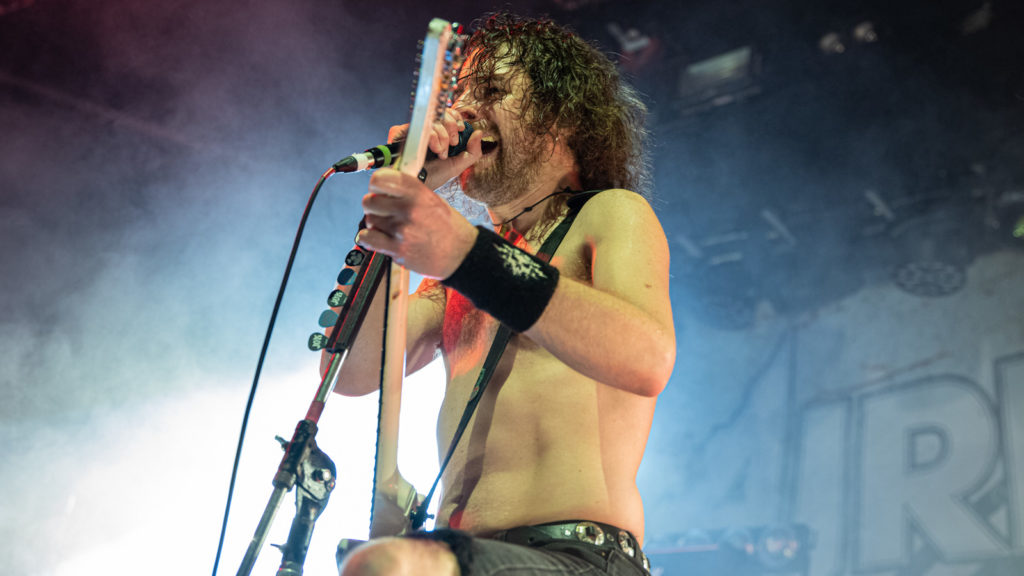 In the subset of the Venn Diagram of Rock occupied by bands whose songs all sound much the same, we find artists with wildly contrasting critical fortunes. As usual with music criticism, this is directly related to commercial success. Nobody ever bought a Ramones record (20 years, 14 albums, number of hits: zero), but they sold an awful lot of T-shirts to people who hadn’t heard a note of their music. This cultural capital is self-sustaining. Any time a Hollywood star is called upon to play an ‘edgy’ or rebellious character, he or she will simply pull on a Ramones T-shirt. Job done. Boris Johnson takes advantage of the same phenomenon when he pretends his favourite band are The Clash. Status Quo, on the other hand, enjoyed hit after hit after hit, and are consequently loathed by critics. But, hey, they’re loaded and no oily politician is ever likely to claim to be a fan in the hope of signalling his or her coolness, so life ain’t too bad. 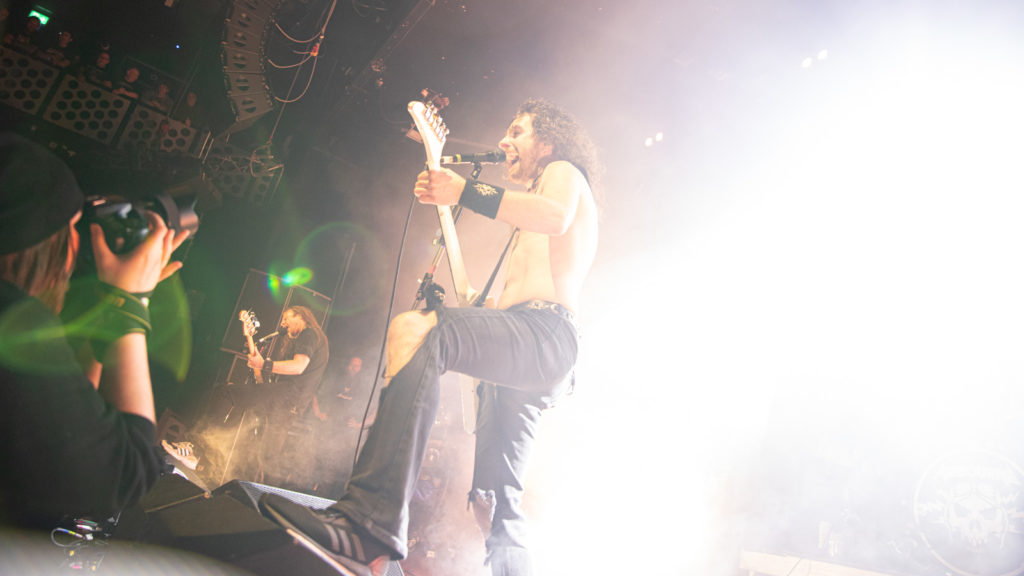 Warrnambool’s Airbourne are more Quo than Ramones. Enduringly popular, their sole ambition is to have a fucking great time and ensure that we have a fucking great time too, though the medium of rock and fucking roll, forgetting about any troubles we may have for 90 minutes or so. And in this they have always succeeded admirably. They also make absolutely no attempt to deny their influences – oh, OK, influence – blasting AC/DC classics through the speakers while the stage fills with fog prior to their arrival. 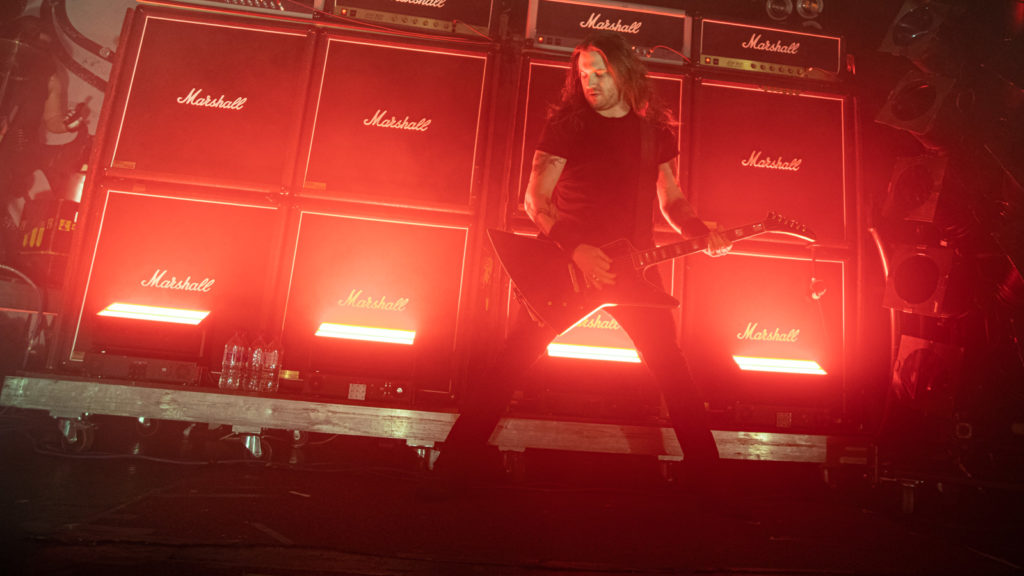 But what’s this? Raise the Flag? Whatever happened to the usual Ready to Rock? Are Joel and chums determined to fuck with our heads? Is a Jazz Odyssey in the offing? Fortunately not. Raise the Flag and Ready to Rock are, after all, best described a close musical cousins. And the latter eventually pops up in the encore. 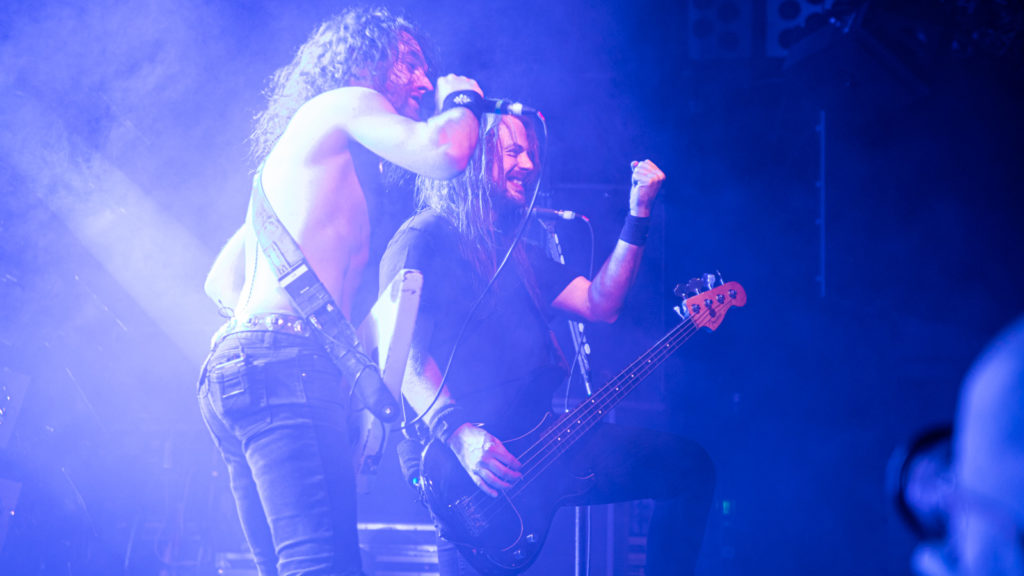 Airbourne going full throttle is a wondrous sight to behold. And that’s just as well because full throttle is their only speed, as they pour every ounce of energy into their no-frills performance. OK, so Joel will later introduce Bottom of the Well as “a slow one”. But it’s not really, is it? It starts off slowly, but Airbourne can’t sustain that for very long and it’s soon back to rockin’ business as usual. Remarkably, even though they’ve been on the road for five solid months there’s absolutely no let-up in the pace. 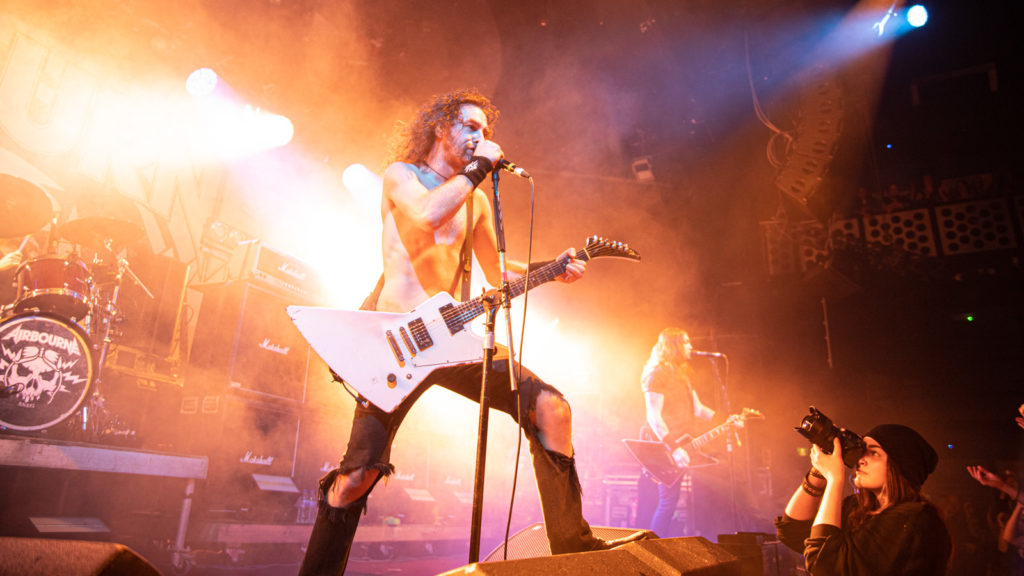 Some reviewers of the band’s fifth album, Boneshaker, have suggested that Airbourne have doubled down on the basics in pursuit of the pure essence of Airbourneness. But you can’t help thinking they’re simply struggling to find something new to say. In fact, it sounds much the same as the previous four albums. But there are advantages to this strategy. When they play a new one, such as the title track, it already sounds familiar, so no one slopes off to the bar. 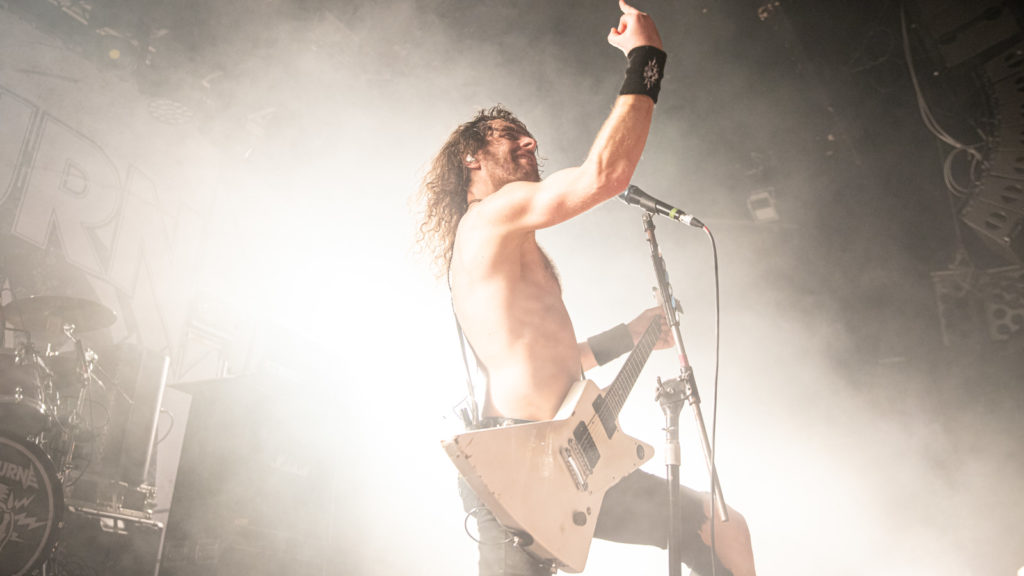 Many of the essentials of the Airbourne live show were already becoming established when they played their first Bristol gig at the Louisiana way back in 2008. Joel will have forgotten to pack a shirt, and his sandpapery rasp will be pitched midway between Bon Scott and Brian Johnson. His brother Ryan will be perched atop a riser flanked by giant stacks of Marshall cabinets, playing solidly four to the floor all evening. Bassist Justin Street and new boy rhythm guitarist Harri Harrison will race around behind Joel, headbanging furiously. At some point, the frontman will clamber aboard a roadie’s shoulders and be borne aloft into the audience while soloing wildly. He will also bash himself about the head with a can of beer until it explodes. (Tonight, he does these things simultaneously while playing Girls in Black – that’s multi-tasking, kids!) And he will visit the disabled viewing area on his walkabout to ensure that everyone there has been properly rocked too. Few of us will avoid being drenched in beer – much of it chucked from the stage. 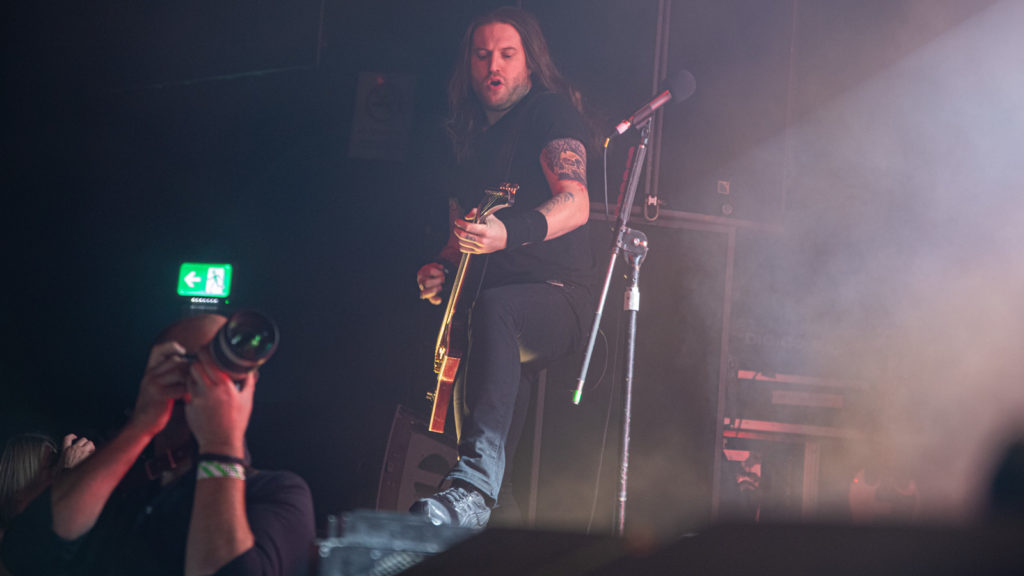 A newer tradition is the makeshift bar, on which Joel pours lethal Jack’n’Cokes (that’s three-quarters of a pint of Jack to a quarter of a pint of Coke), which are handed out to fortunate thirsty members of the audience. This in tribute to his old chum Lemmy (“Lem-my! Lem-my!” chant the crowd, while mine host mixes the liver-shrivelling refreshments), subject of It’s All for Rock’n’Roll – one of approx 350 Airbourne songs to feature the words ‘rock’ or ‘rock’n’roll’ in the title. 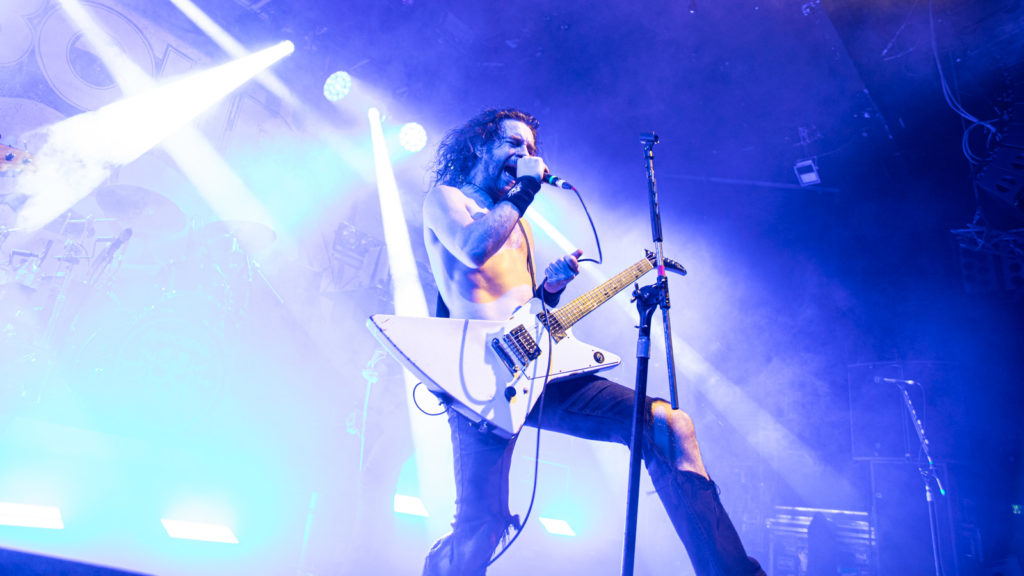 For an Airbourne show to work, the vital ingredient is a raucous, up-for-it crowd. Even on a drizzily Monday night, Bristol doesn’t disappoint. “You are the best audience in Britain!” lies Joel, as he probably does every night. But he’s not far wrong, as wave after wave of crowd-surfers find themselves deposited in the photo pit during closer Running Wild. Fans of beard-stroking, leftfield experimentalism will not have found much to detain them here. But sometimes pure, unadulterated, unapologetic and wholly unpretentious rock and fucking roll is all you need.