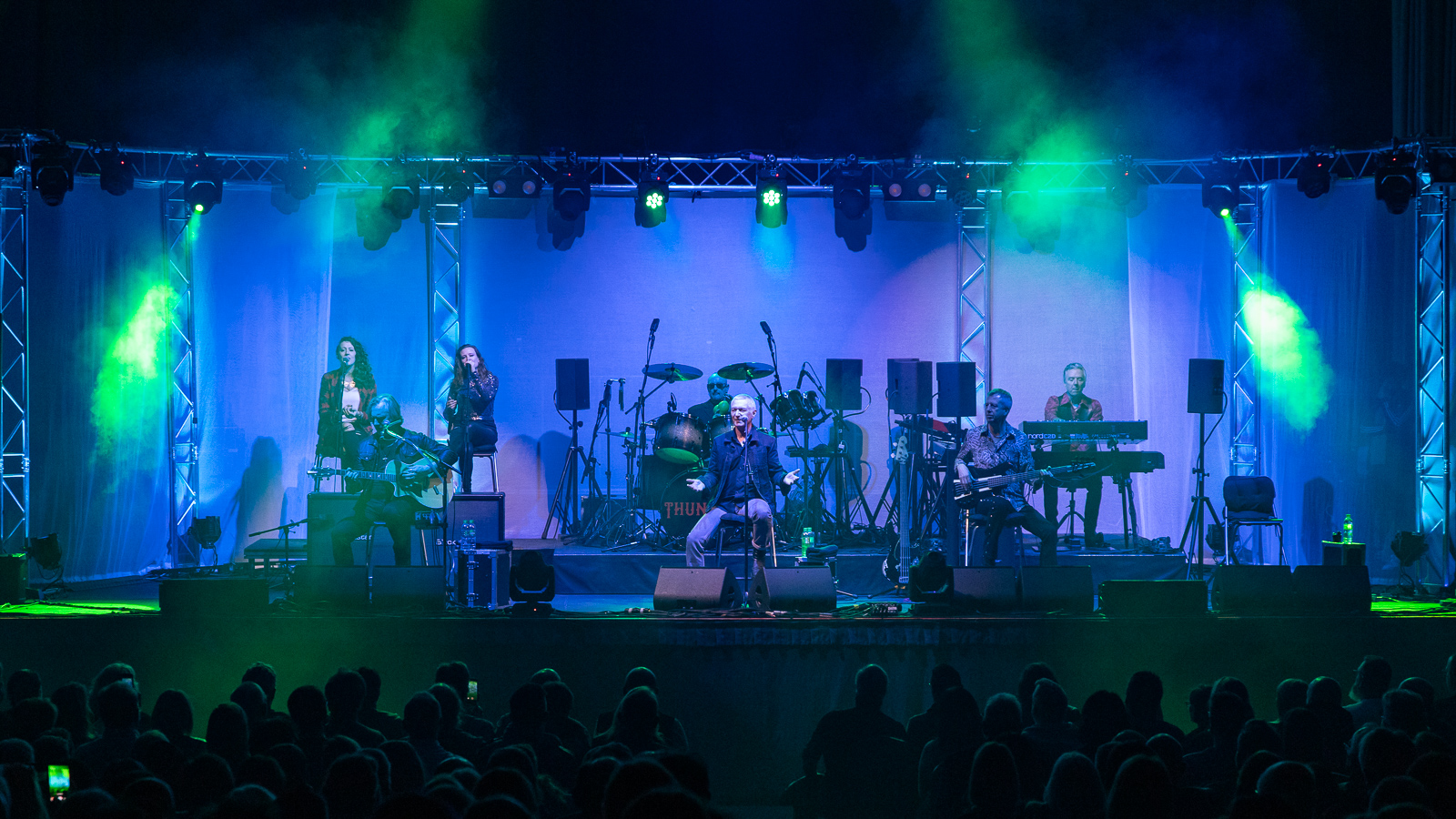 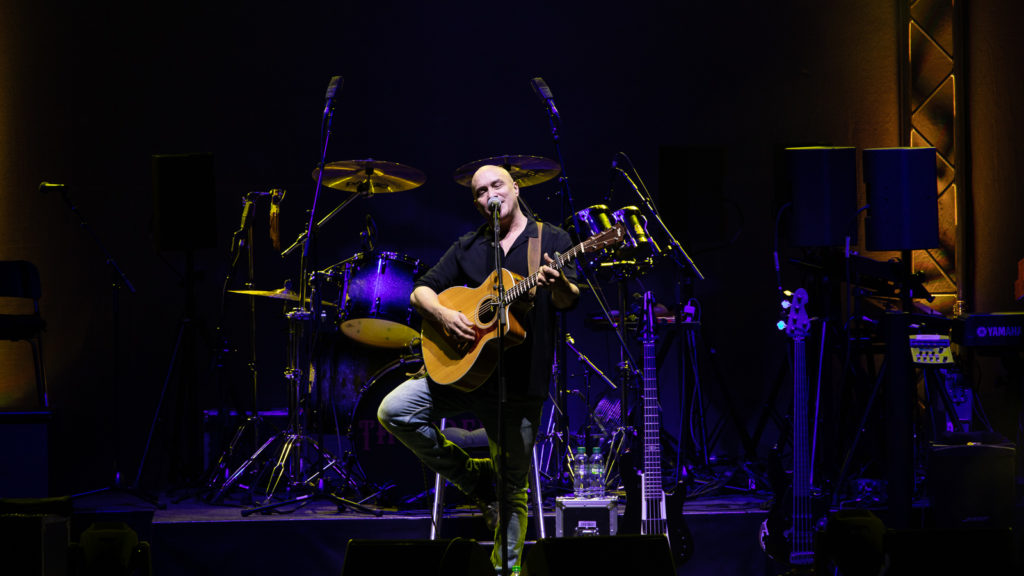 Coming Up for Air, the title track from the comeback album he recorded after abandoning the music industry to commune with Mr. Lama, is suitably euphoric, while Rainbow Child (introduced, as usual, as “a song I wrote in the parking lot of a Grateful Dead concert in 1988”) is the DRN song best suited to this format. 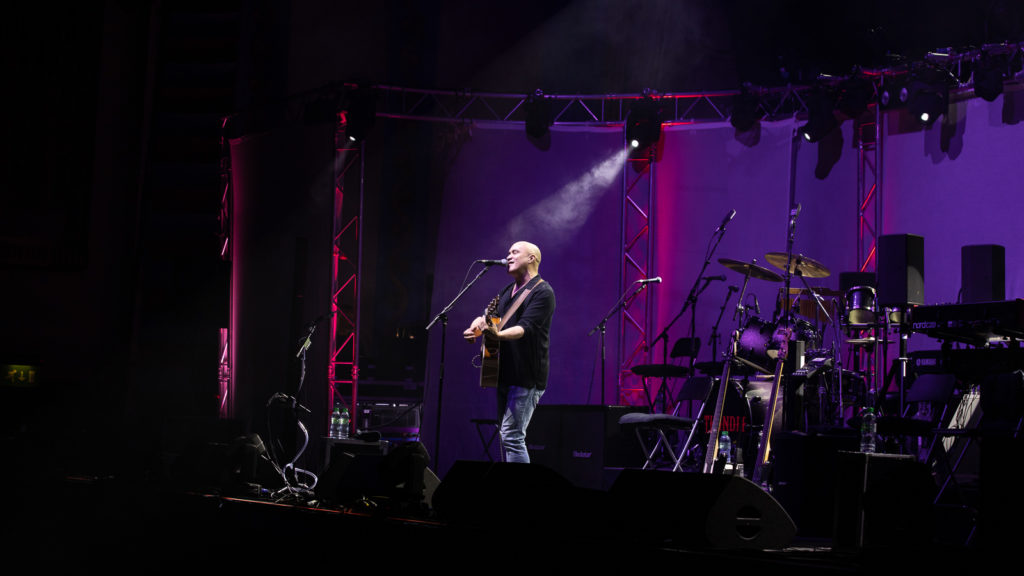 Then, rather brilliantly, he reworks Ronnie James Dio’s Holy Diver as a dark folk song, forcing us to concentrate on the lyrics, which fit well with the Reed worldview. (He’s a hippy, basically.) Ronnie once explained that the song was about a man travelling the world in search of spiritual enlightenment, only to return having forgotten all about his quest. This segues neatly into Dan’s own Distant Star, which appropriates Dio’s ‘absent light’ lyric for its own purposes. 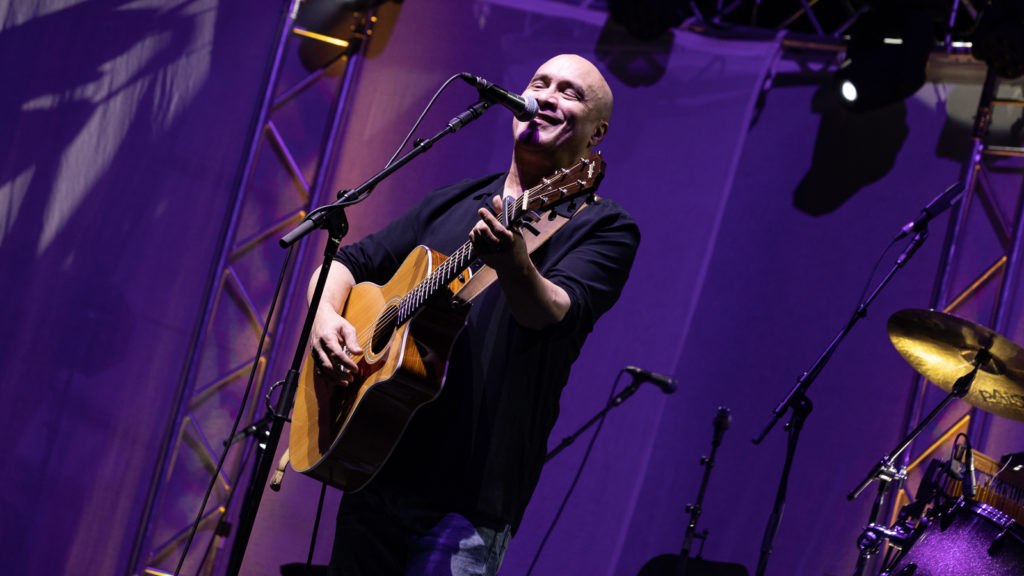 His crowd participation version of the Network’s Get to You proves about as funky as it’s possible to get with an acoustic guitar and he finishes with an unaccompanied vocal rendition of the simple yet heartfelt All My Lovin’. 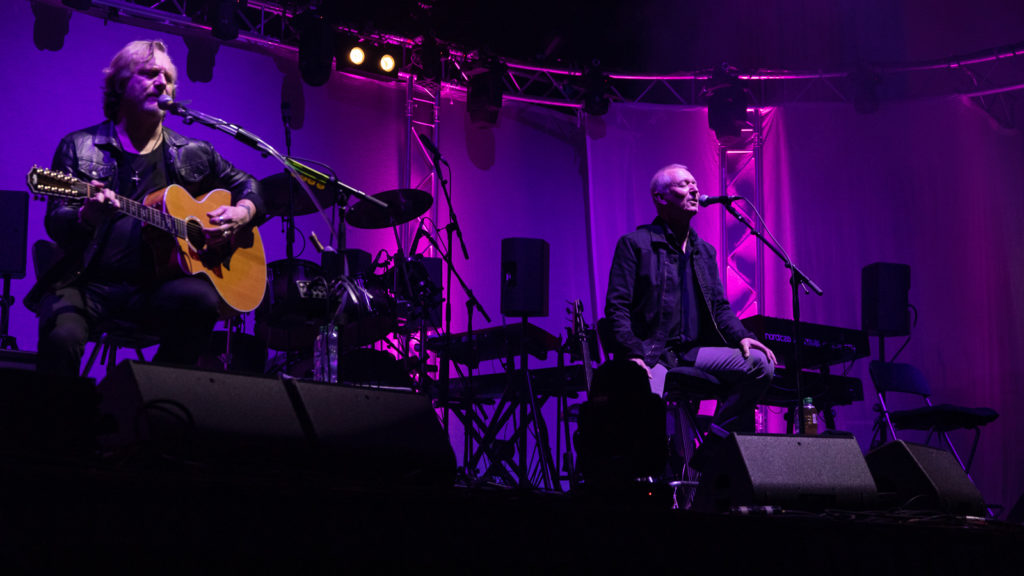 “It’s weird, right?” remarks Danny Bowes about halfway through Thunder’s set. “But is it good weird or bad weird?” 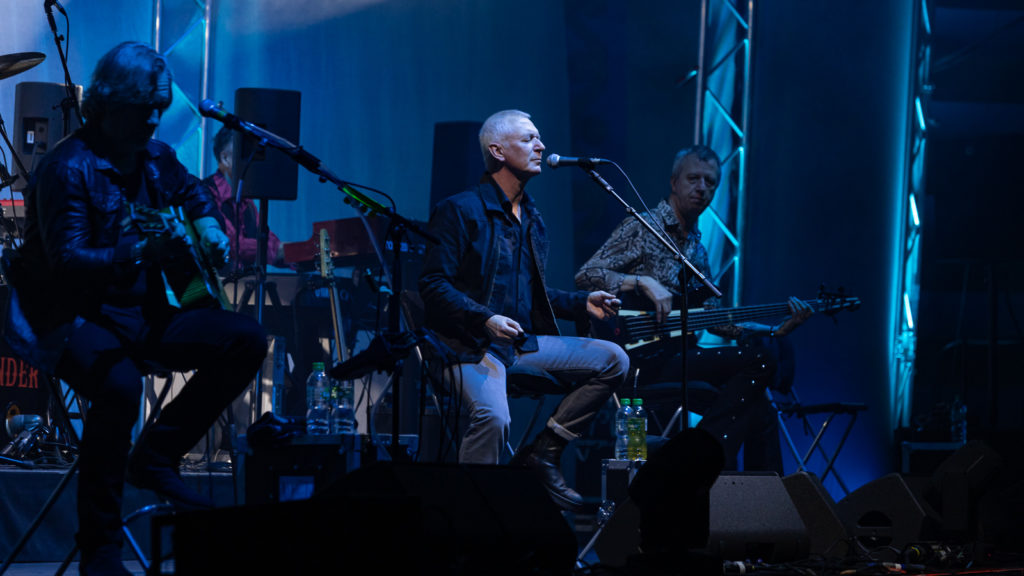 Yep, the last of the great Britrockers have been trying to get rid of their audience for years, but the buggers keep coming back. The band have even split up twice, only to find themselves more popular than before upon their return. Now they’ve put the proverbial cat among the pigeons with their Please Remain Seated album (another top ten hit) and this accompanying tour, which have actually succeeded in provoking members of the troll community. 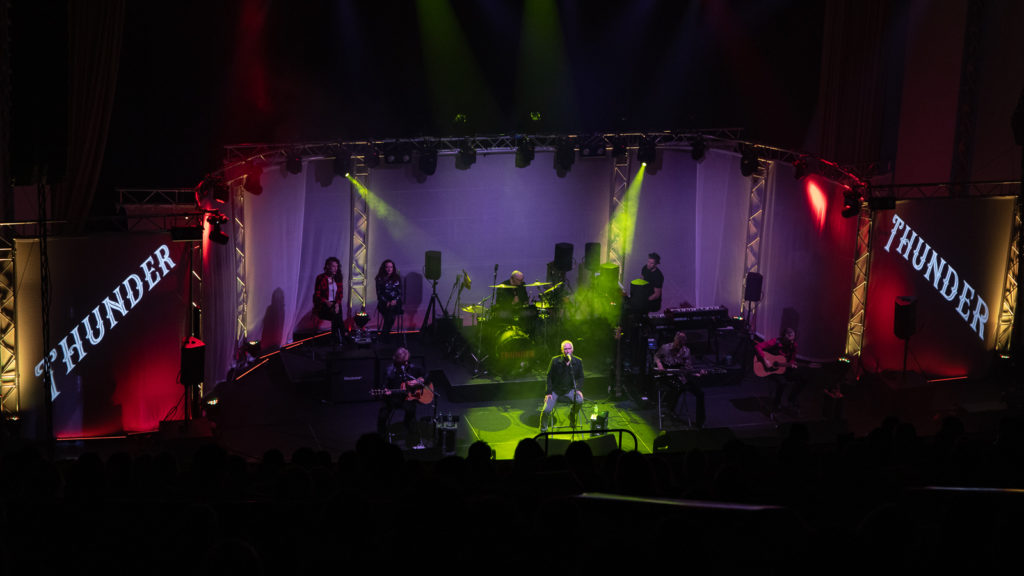 The problem? No rocking at all. Rather than simply doing the unplugged thing that so many bands use as a stopgap when they’ve run out of inspiration, Thunder chose to radically reinterpret songs from their catalogue, mostly in laid-back stylee, with the emphasis on what might, in less enlightened times, be referred to as their red-haired bastard stepchildren, who are rarely introduced in polite company. 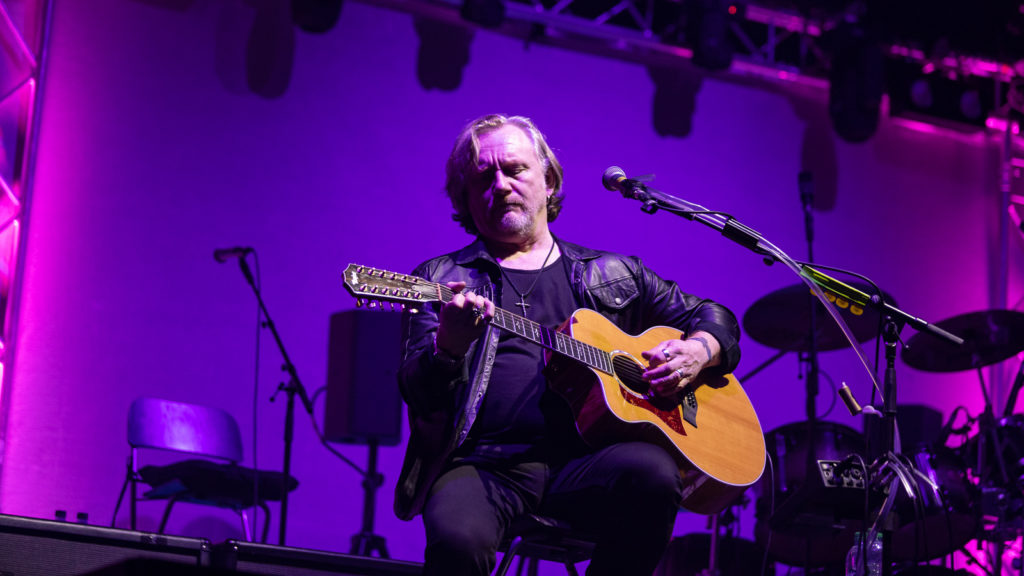 So – good weird, or bad weird? Well, Danny and guitarist Luke Morley come out first for an acoustic version of Love Walked In. It’s nice enough, if a rather conventional unplugged rendition and you can’t help anticipating the moment when the drums and hard-rockin’ guitars should come crashing in. 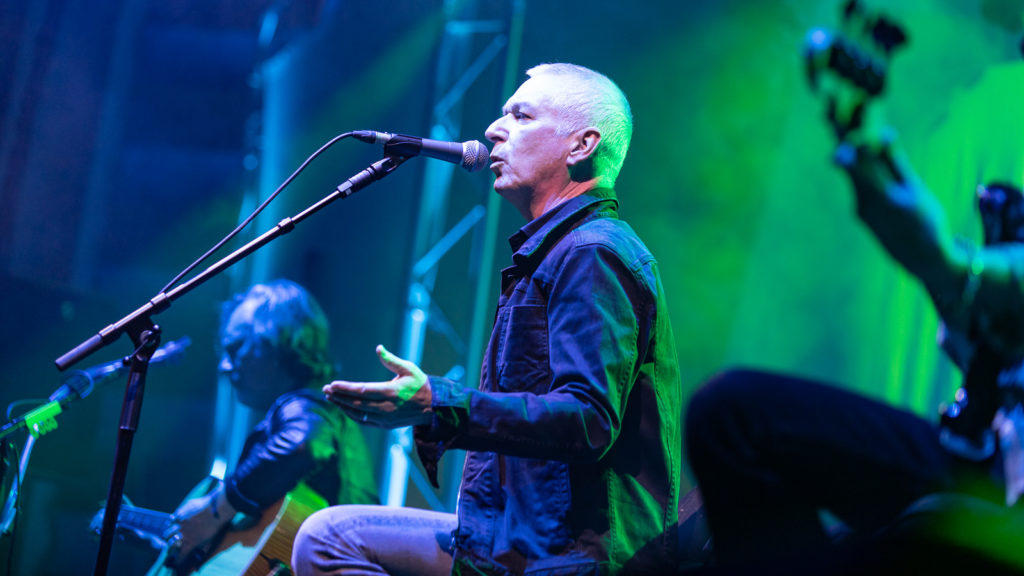 Having explained the Please Remain Seated concept for the benefit of anybody who might have been expecting a rock show, Danny brings on the rest of the band – guitarist/keyboard player Ben Matthews, bassist Chris Childs and drummer Harry James – and acknowledges the irony of playing a song entitled Stand Up. This version sounds a tad skiffle-esque and two people actually do stand up, in an act of shameful rock’n’roll defiance. It’s certainly odd that under normal circumstances Danny plays the ringmaster, exhorting everyone to jump up and down, but tonight our participation is limited to a bit of clapping, some arm-waving and a modicum of ‘jiggling’ – all from a sedentary posture. 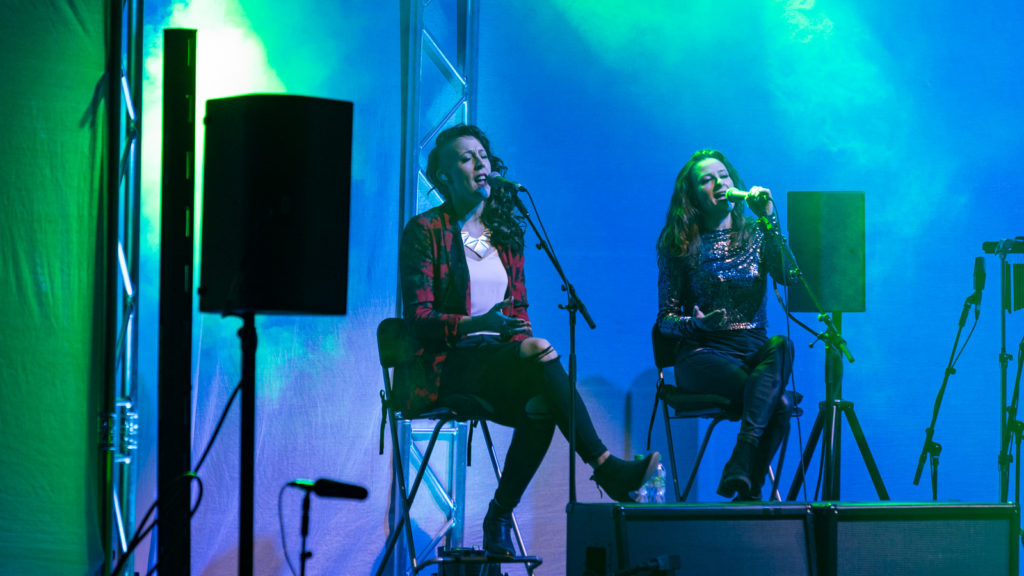 Backing singers Emily Lynn and Lara Smiles pitch up for Miracle Man, breathing sultry new life into the track from the Bang! album. But the real highlights follow. It’s certainly interesting that some of the more daring experiments yield the greatest successes. Exhibit A: the overlooked Future Train, which Thunder haven’t played for years. Now it’s retooled as a shimmering gospel number in a mock-sitar Indian wrapping. And it sounds superb. 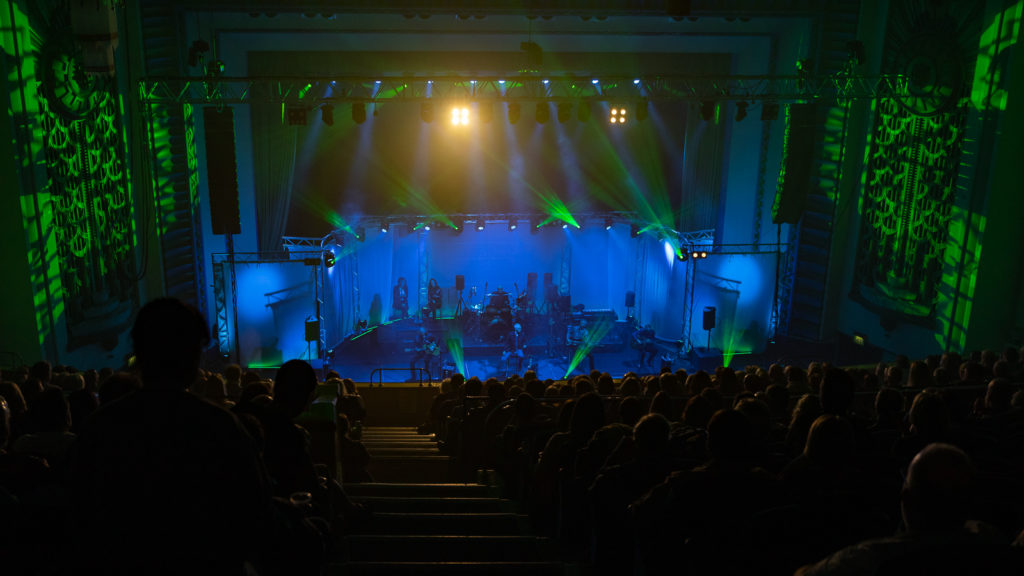 While Thunder have never been an overtly political band, it’s also hard to avoid the fact that the lyrics seem perfectly suited to Brexit-era politics, with their references to a leader with an agenda to hide “turning fear into hatred, stirring something deep down inside” and the chorus of “The future train’s coming down the hill/And we’re tied to the track”. Yep, this is an anthem for March 29. Except, of course, that it was written way back in 1995. 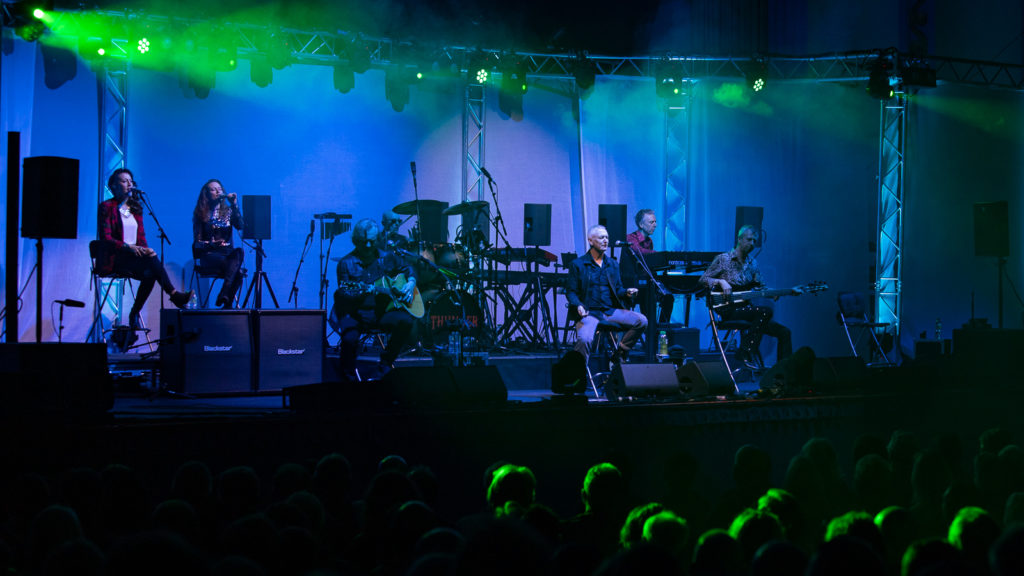 River of Pain works equally well in this format, but does the world really need a lounge jazz version of Girl’s Going Out of Her Head? One suspects not. While the notion of Thunder going reggae might seem even more alarming on paper, Fly on the Wall actually succeeds by not overdoing it on the heavy dub skanking front. Songs like Loser and A Better Man, which already spring from solid blues roots, are tweaked more subtly and help keep the spectre of everything going a bit Jools Holland at bay. 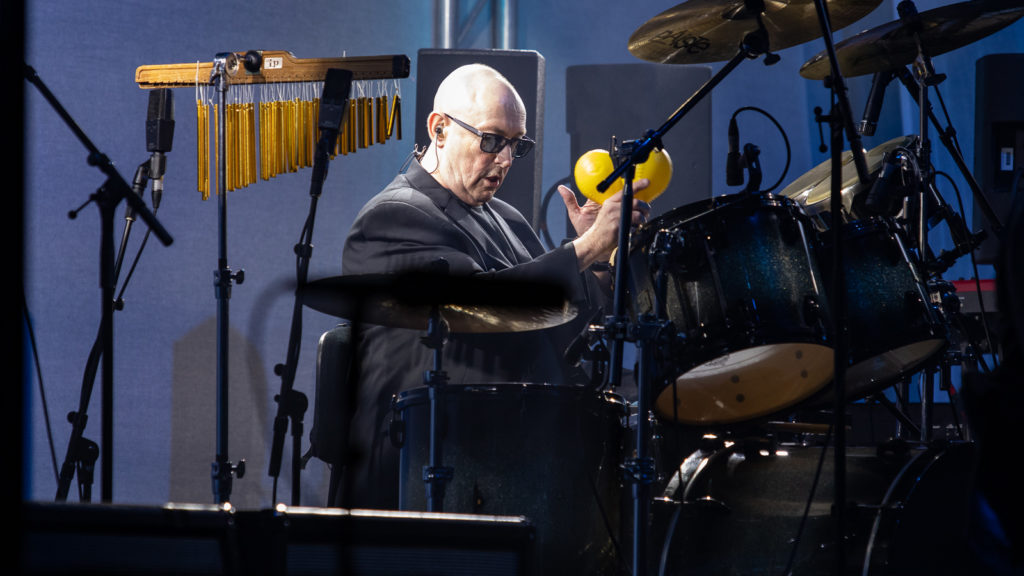 Accomplished pianist Sam Tanner joins them for the latter part of the show, which means there can be as many as eight musicians on stage at any given time. Morley gets to demonstrate his versatility on both electric and acoustic guitars, while a slightly subdued Harry, being unable to hit things as hard as usual, tries out a variety of percussion like he’s the new Ray Cooper. Danny sounds just great. But then, as one of our greatest soulful rock singers, he always does. 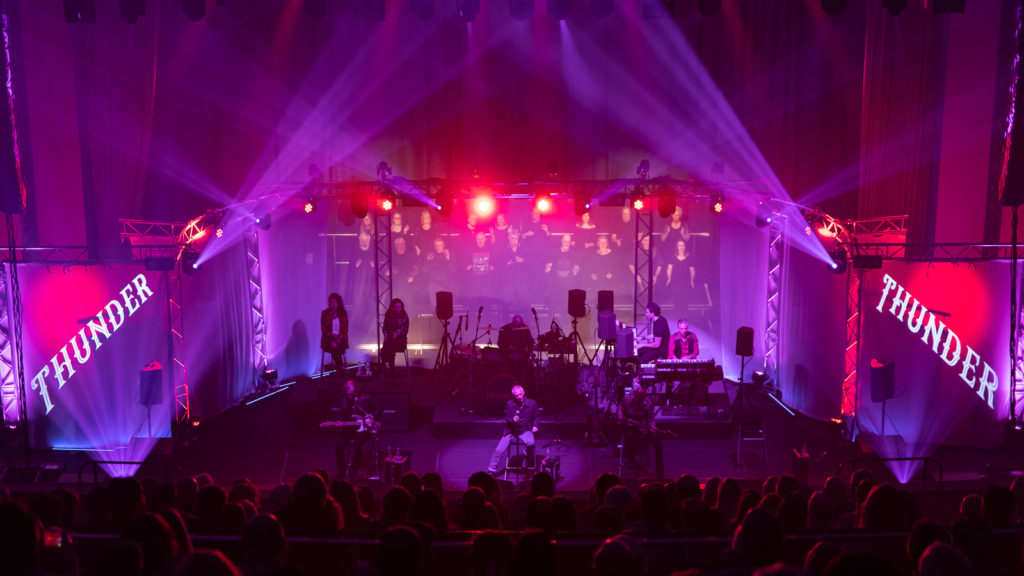 An extended encore brings a Hammond-driven reinterpretation of She’s So Fine, a gorgeously anthemic Resurrection Day and Low Life in High Places, with the inspired addition of a Thunder Choir spotlit behind the rear stage curtain. It certainly makes a change from another over-extended rendition of Dirty Love. 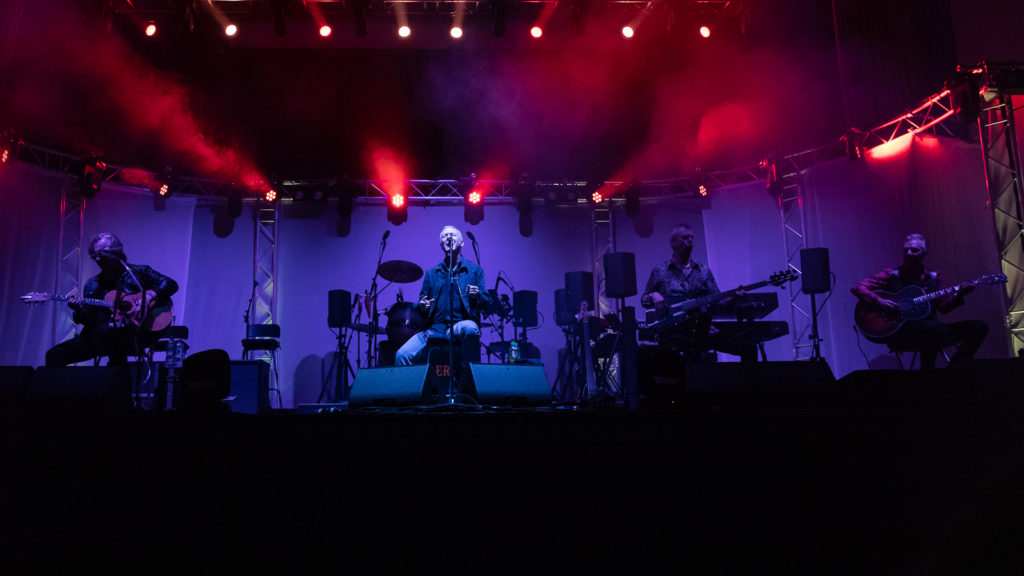 The signs suggest it’ll be rockin’ business as usual for Thunder next time out. At best, the Please Remain Seated venture has yielded some spectacular successes that should help keep things fresh by informing their future songwriting. But if you embark on this type of adventure again chaps, could we have death metal versions next time?