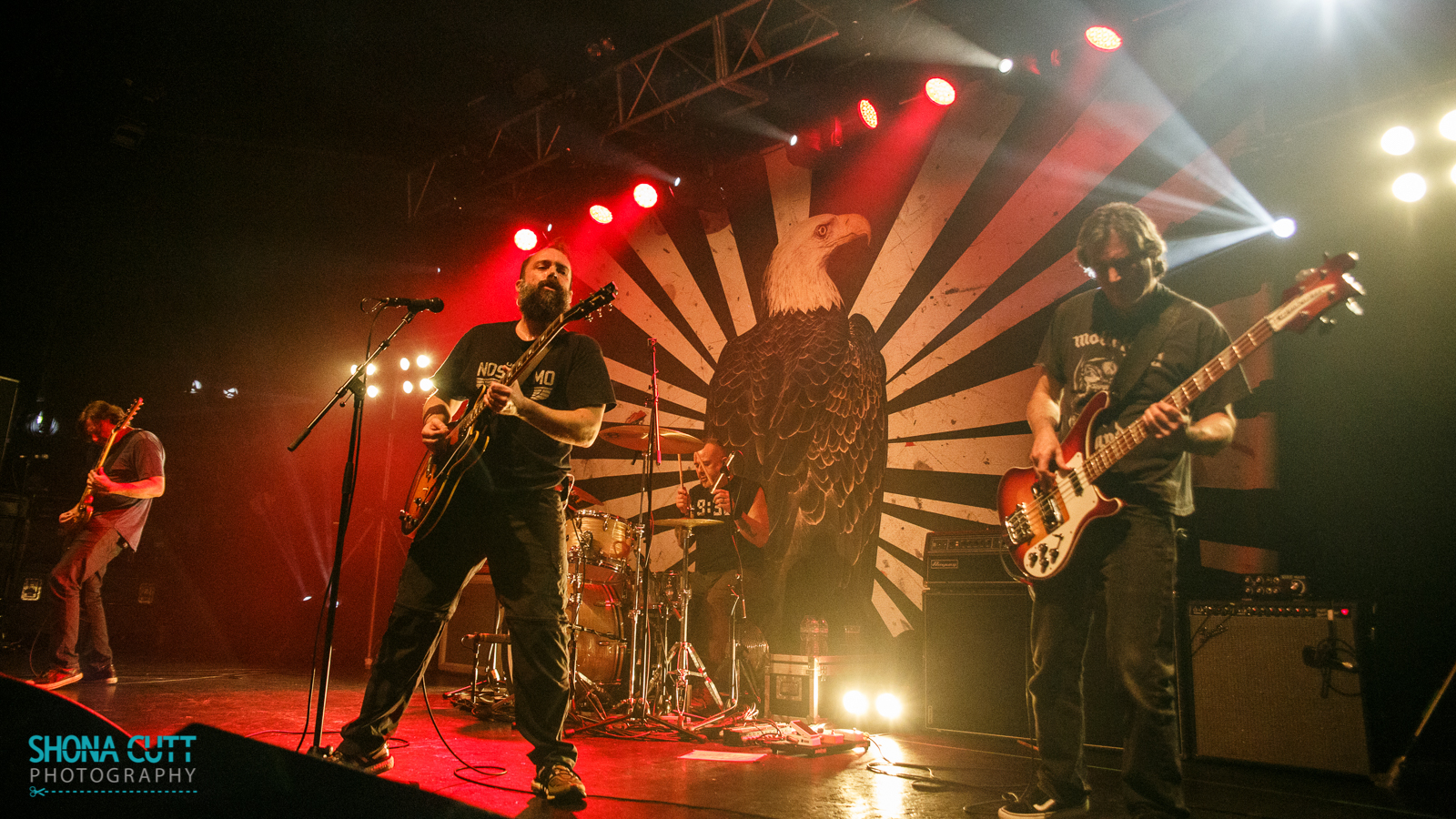 Picture a bloke who’s spent the best part of a day struggling to put together an item of IKEA furniture. Finally, in rage and frustration at the components that refuse to fit together, he reaches into his toolbox, grabs his two largest hammers, and sets about reducing the object of his ire to sawdust. 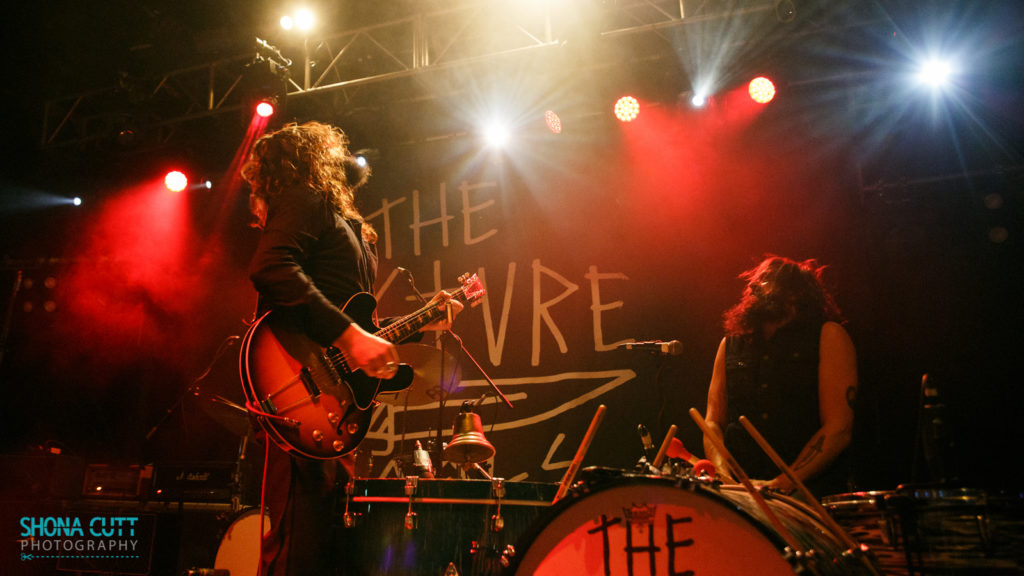 That’s how Philipp Mirtschink plays the drums. A whirlwind of sweat, fury, beard and hair, he’s very much the focal point of The Picturebooks, despite the best shape-throwing efforts of guitarist Fynn Claus Grabke. Yes, these guys look American and sound American but are, in fact, German. 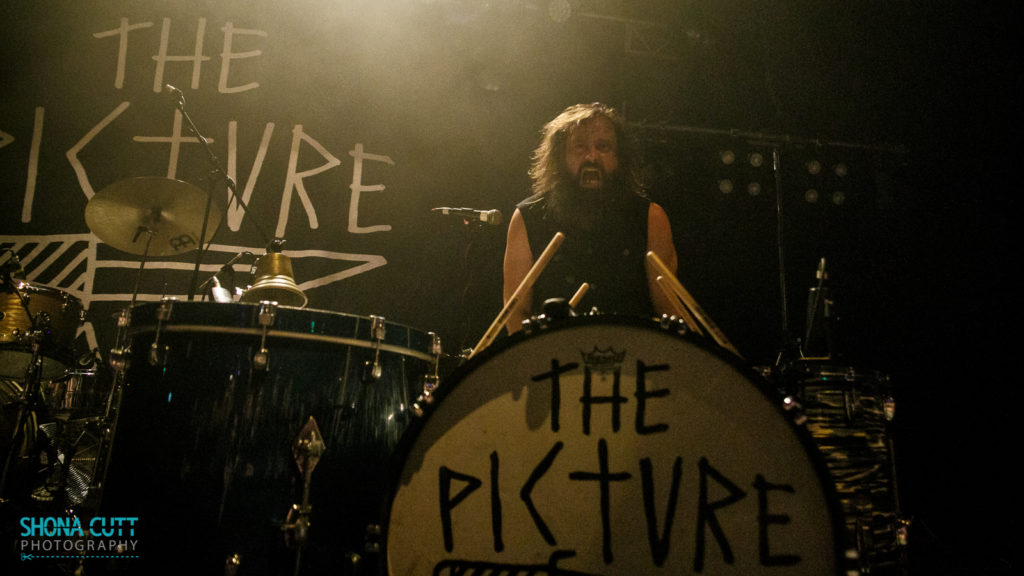 This is the third time The Picturebooks have played round these parts. Only five people turned up to their local debut at the Louisiana, but support slots with The Answer and Monster Truck have brought them to the attention of a wider audience. 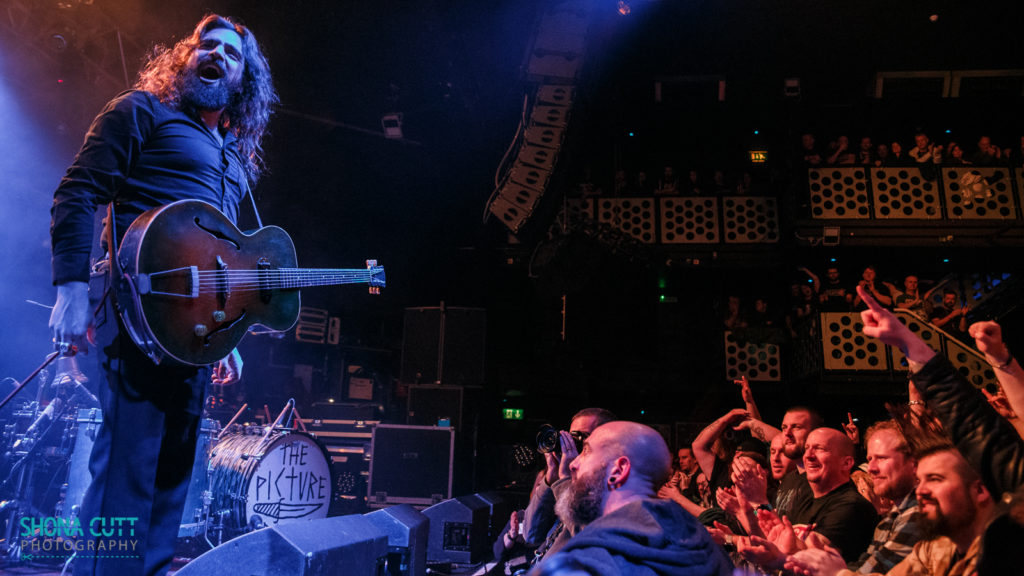 Their commendably straightforward approach to the self-limiting modish duo format is simply to play the shit out their instruments, producing an almighty dirty blues racket. Given a generous 45 minute slot by the headliners, they show no sign of flagging, with Grabke hurling himself about the stage while Mirtschink wreaks furious vengeance upon his unconventional kit with a variety of outsize sticks and mallets, adding percussion of his own devising and even a large bell. 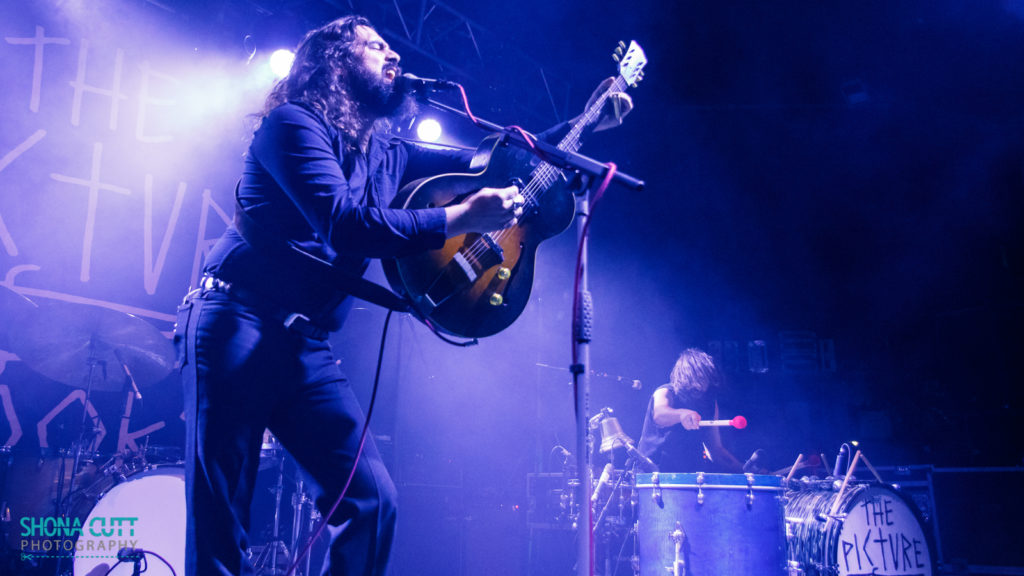 For those of us who’ve seen them before, there’s something very familiar about their set. That’s a polite way of saying it’s pretty much the same as last time, from the thunderous The Rabbit and the Wolf to the rabble-rousing Zero Fucks Given and bellow-along audience participation number Your Kisses Burn Like Fire. That said, The Picturebooks are new to most of this audience and certainly set out their stall effectively. Grabke is very keen indeed to let us all know that they’ll be back next year with a completely new set, so we’ll do our bit by mentioning that the date for your diary is May 9 at the Exchange. 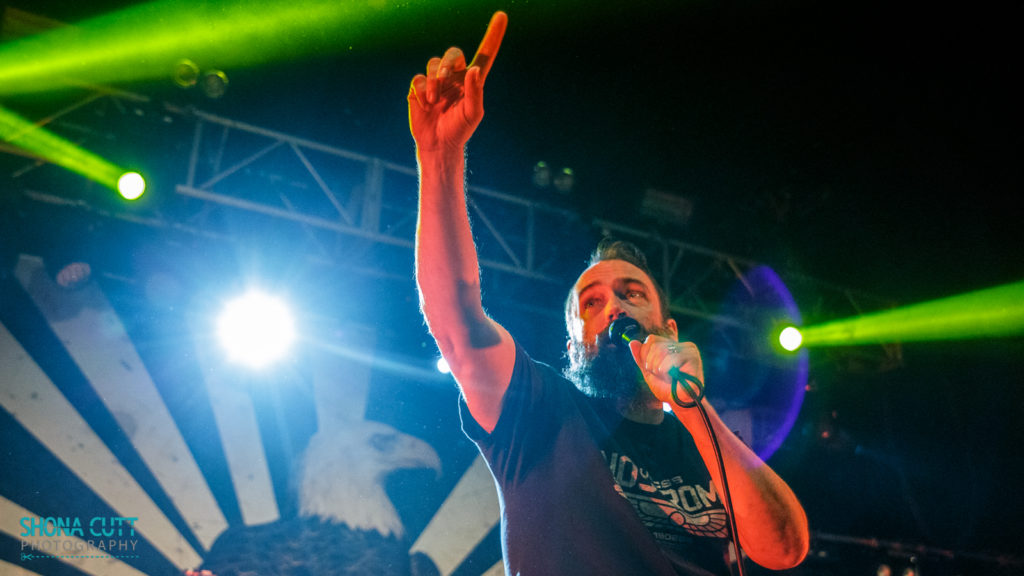 Maryland’s Clutch are the unlikeliest looking bunch of rockers. The giant eagle backdrop is pretty much their sole concession to traditional rock stagecraft. There’s no flashy light show or grand stage props. Jean-Paul Gaster’s drum kit is relatively modest, while guitarist Tim Sult and bassist Dan Maines look like a pair of IT workers on dress-down Friday, the former barely acknowledging the audience all evening as he hunches over his instrument and the latter sporting a vintage Motorhead T-shirt that could well be a souvenir of their memorable jaunt with Lemmy’s mob back in 2006. 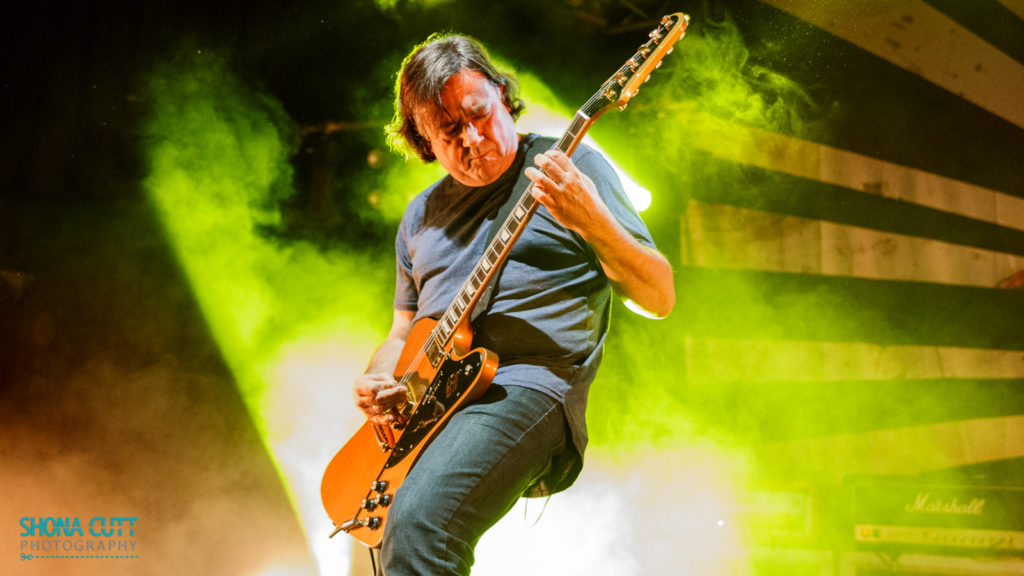 That leaves beardy frontman and occasional guitarist Neil Fallon to shoulder much of the performance burden, inhabiting the songs by contorting his body and jabbing the air with his finger like a fiery Old Testament preacher possessed by the spirit of rock’n’roll rather than a vengeful deity. 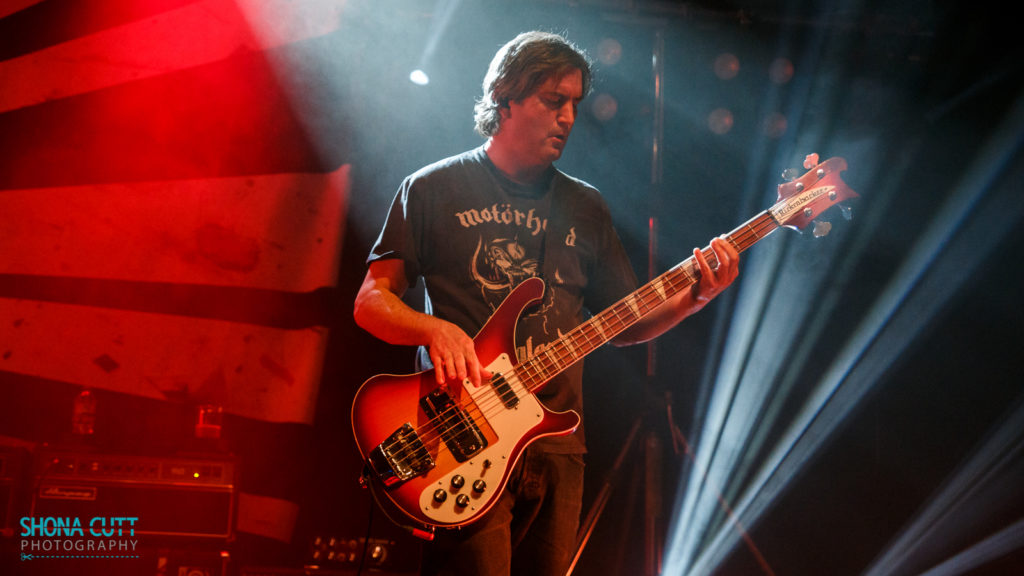 This means it’s all about the music, man. Having worked their way up old-school stylee to reach the point where they can reliably sell out Academy-sized venues each time they tour, Clutch have retained their underground cred, never having had a hit, a huge album or even much in the way of radio play. But unlike many of their peers, they’ve hit a creative plateau without repeating themselves and clearly savour the freedom afforded by their situation to shake up the set list every night. 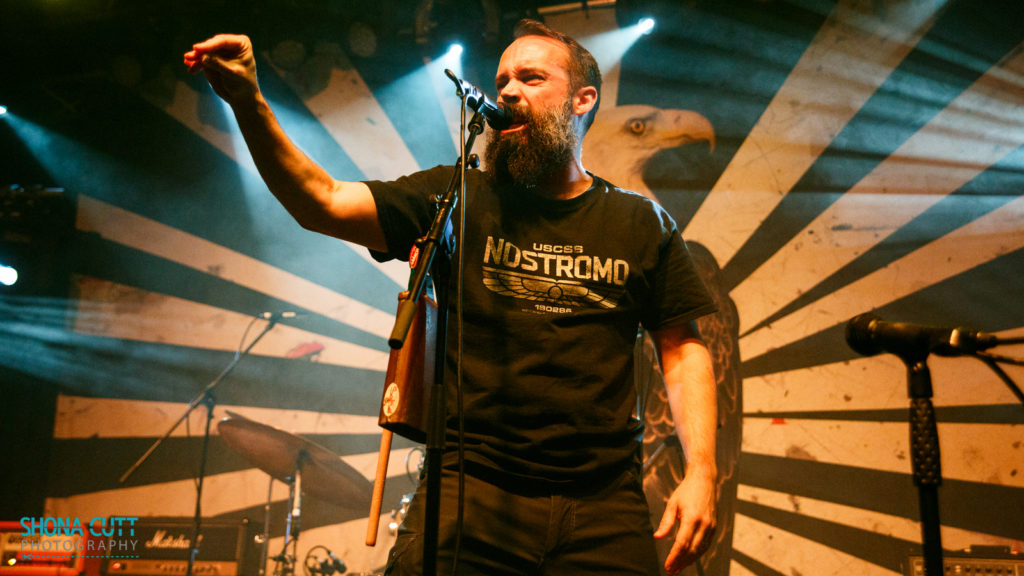 “Let’s have a party,” barks Fallon to a huge roar of approval from the capacity crowd as Clutch launch in to old favourite DC Sound Attack! Other bands might leave a full-on jam until mid-set, but these well-drilled road warriors can pretty much do what they damn well please at this point, with Fallon giving it plenty of Walken-approved cowbell. 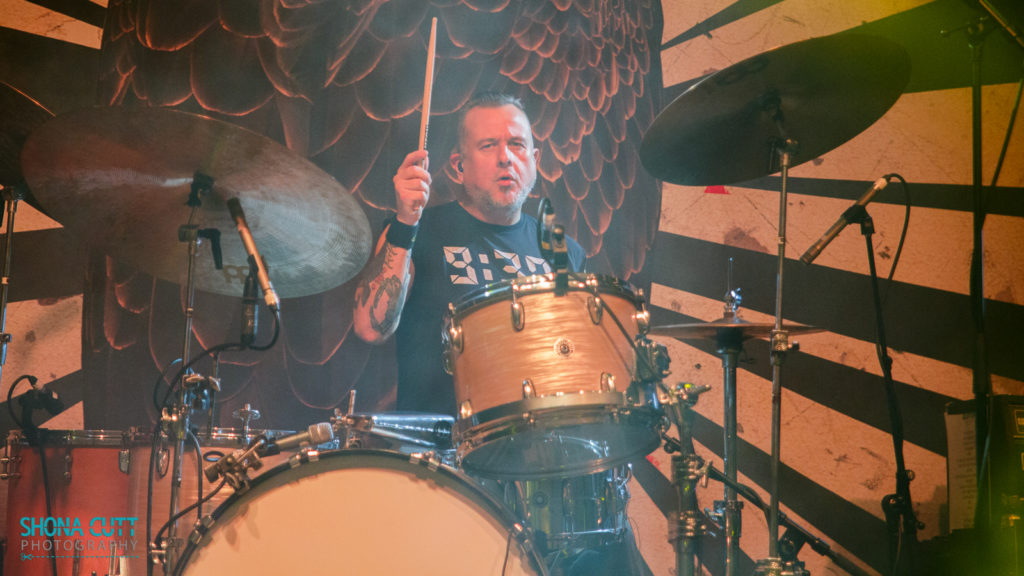 The other thing we know about Clutch is that the new album always dominates the set. That means we might miss some favourites from its immediate predecessor (no X-Ray Visions tonight). But with quality control so high, no one’s complaining about the seven songs from Book of Bad Decisions. The likes of Emily Dickinson and In Walks Barbarella are greeted with the same enthusiasm as aptly titled set closer The Mob Goes Wild. Elsewhere, a particularly punchy Sucker for the Witch makes a strong bid for highlight status alongside the full ZZ Top of Electric Worry. 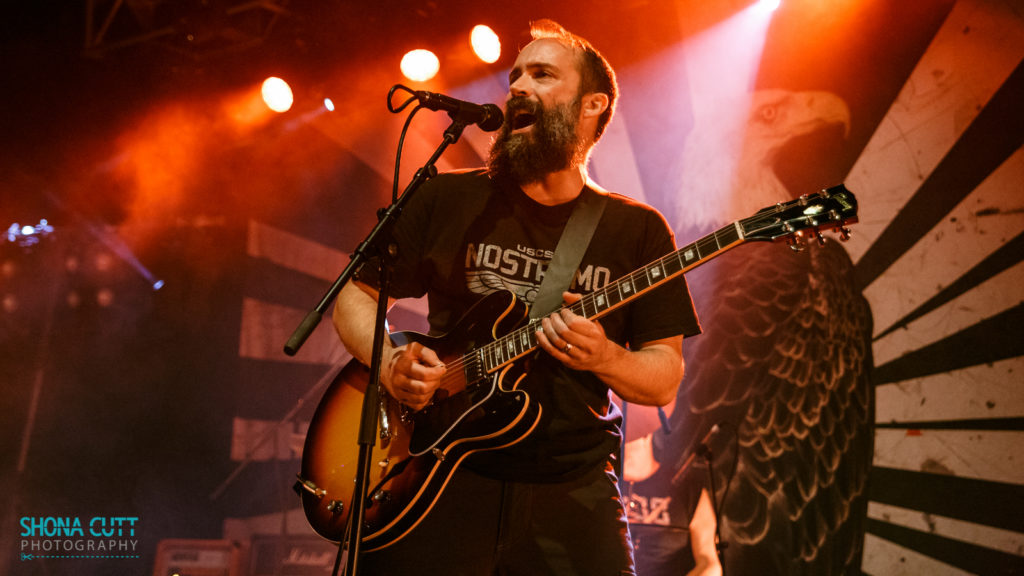 This isn’t one of those epic two-hour-plus metal sets that we’ve become used to. Indeed, a quick check of the watch reveals that they’re on stage for just an hour before the encore. But Clutch’s songs tend to be short and snappy, and they manage to cram 15 of them into this lean, fat-free performance. 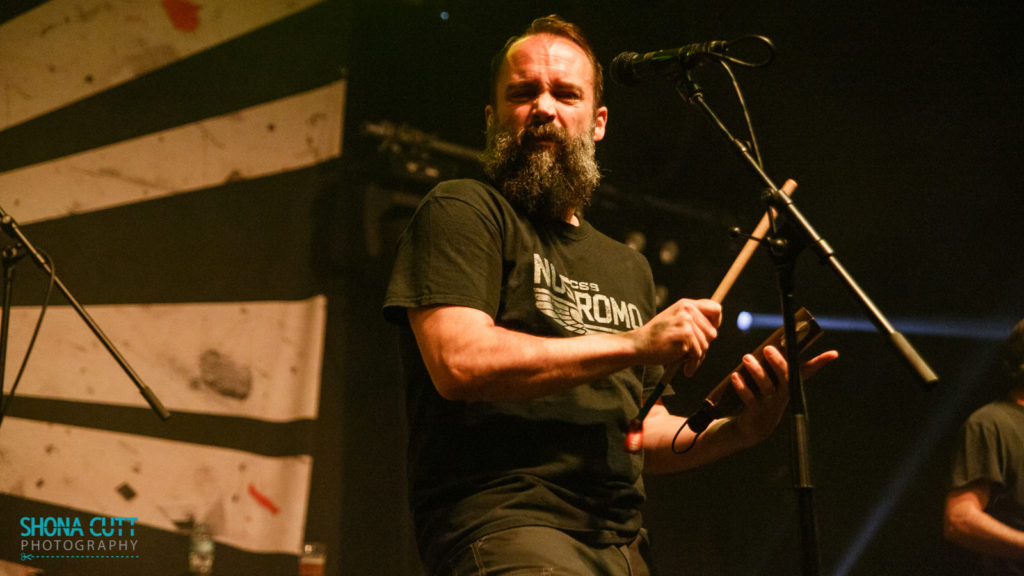 Just because they can, they return to Book of Bad Decisions for the encore, rather than mining the catalogue for old faves. Fallon introduces A Good Fire as “a song about drinking beer and listening to Black Sabbath”, but things take a darker turn with the concluding Weird Times, whose timely, typically colourful Scientology-referencing lyrics capture a world in populist flux where competing siren voices offer the gullible simple solutions to complex problems. Neil Fallon for president? Stranger things have happened…