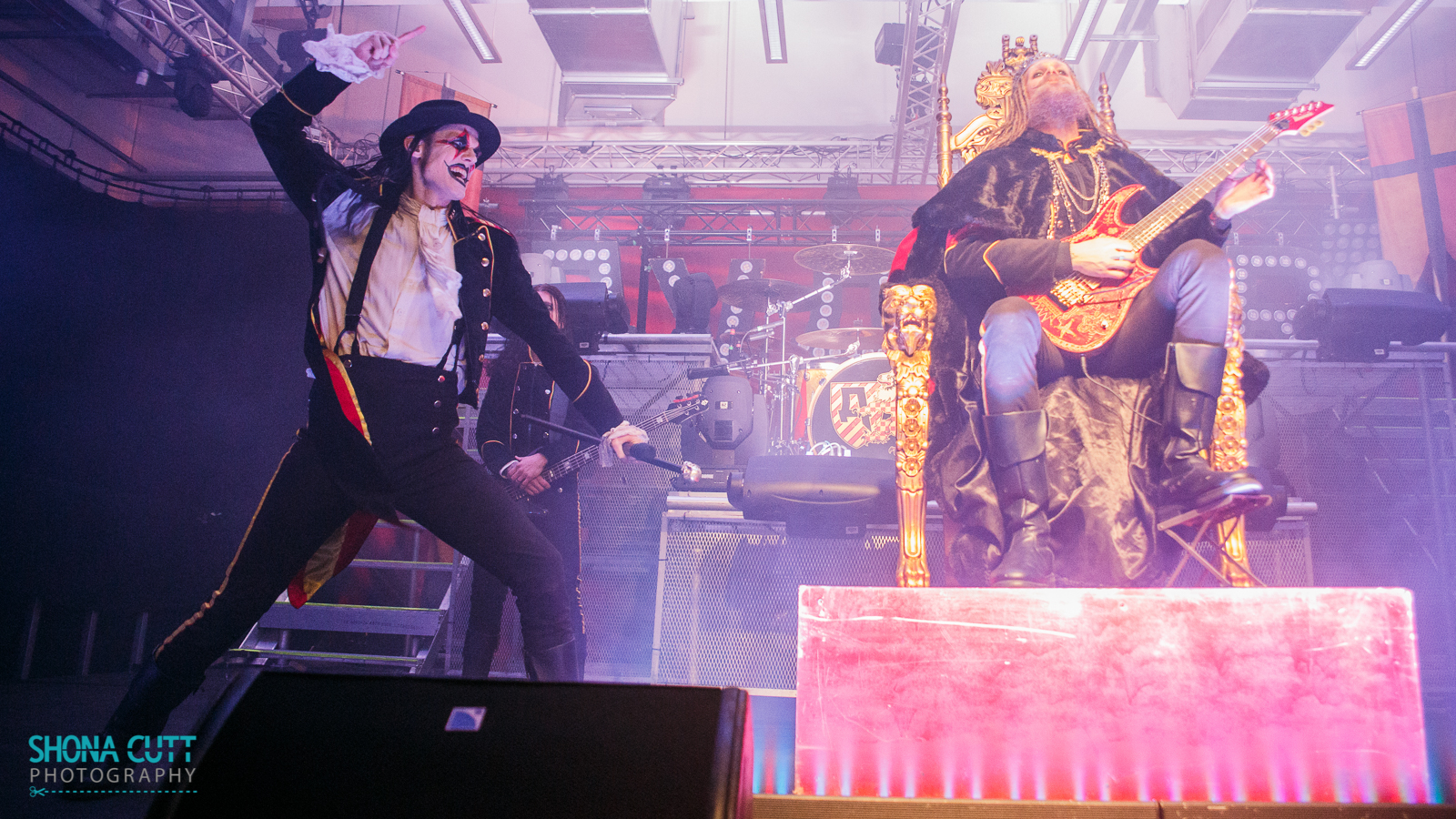 What could be more odd than a Swedish theatrical melodic progressive death metal band playing the University of Bristol Students’ Union? Why, choosing as their support act an Irish punk band. From Canada. (Mind you, as a student here in the 1980s, this reviewer once saw paunchy paedo Gary Glitter headline a rag ball in this very room, so the oddness bar has always been set pretty high.) Despite struggling with a muddy sound, The Mahones (geddit, Pogues fans?) are certainly up for the challenge, though frontman Finny McConnell seems to have to keep reminding himself that he’s playing to a metal audience – dedicating a song to the late Joe Strummer one minute and namechecking Black Sabbath and Slipknot the next. Unsurprisingly, the punked-up Oirish jiggery in their repertoire goes down best with this well-oiled Saturday night crowd. Do they play The Wild Rover? Of course they bloody do. 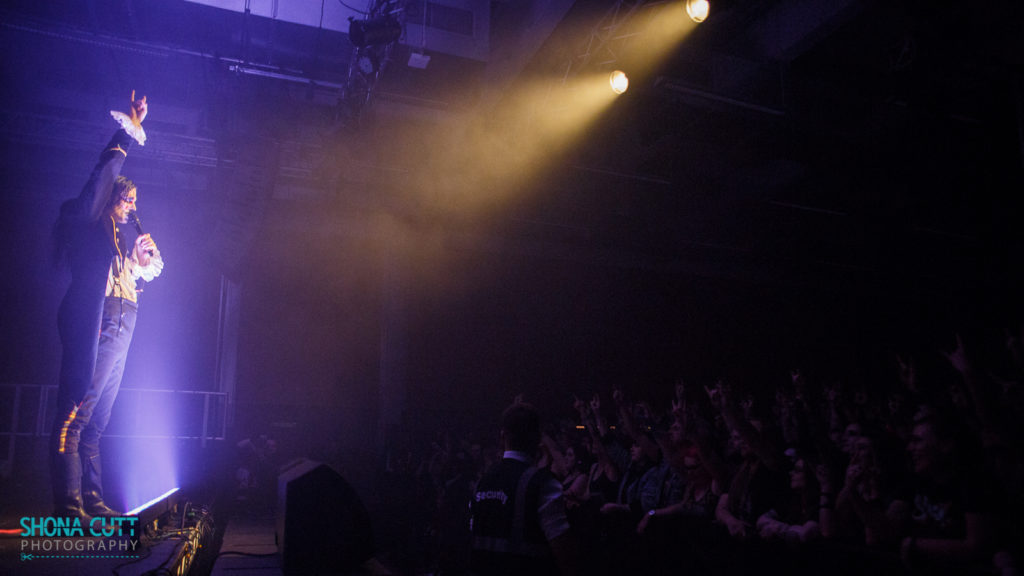 Just four years ago, Avatar had a lowly support slot aboard the good ship Thekla. As is traditional for metal bands, their rapid ascent has gone largely unnoticed by the mainstream media, the bonus being that they can now count on the loyalty of each hard-won new fan. As a consequence, the mostly sold-out Avatar Country world tour, which began more than a year ago, has been extended until March. 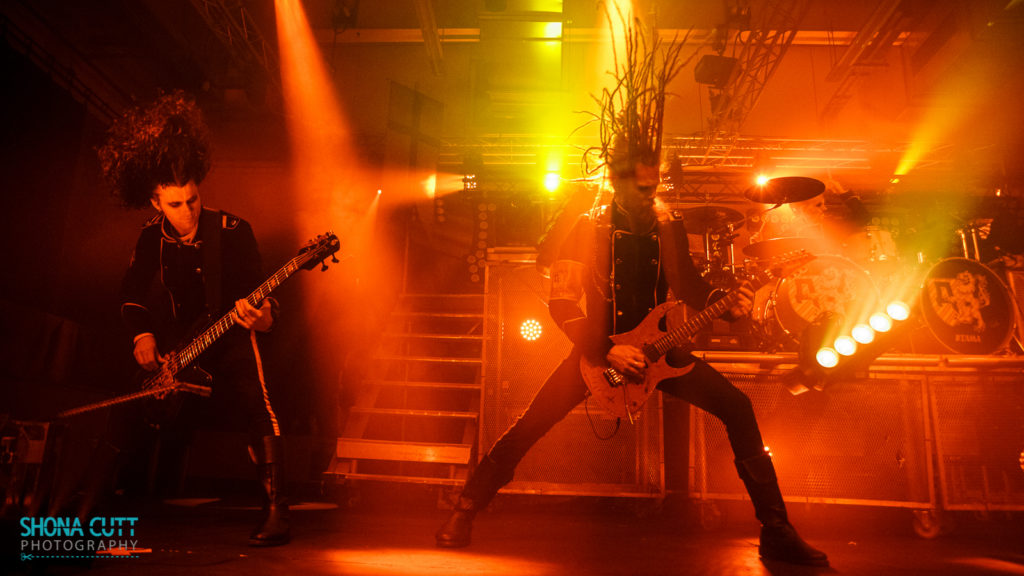 Having made an impressive bid to upstage Halestorm at the Academy last year, the greasepainted Swedes finally brought their full headlining production to Bristol. Or as much of the multi-level stage as they could cram into the Anson Rooms – though it’s occasionally touch and go as to whether someone’s going to disappear into the lighting rig. 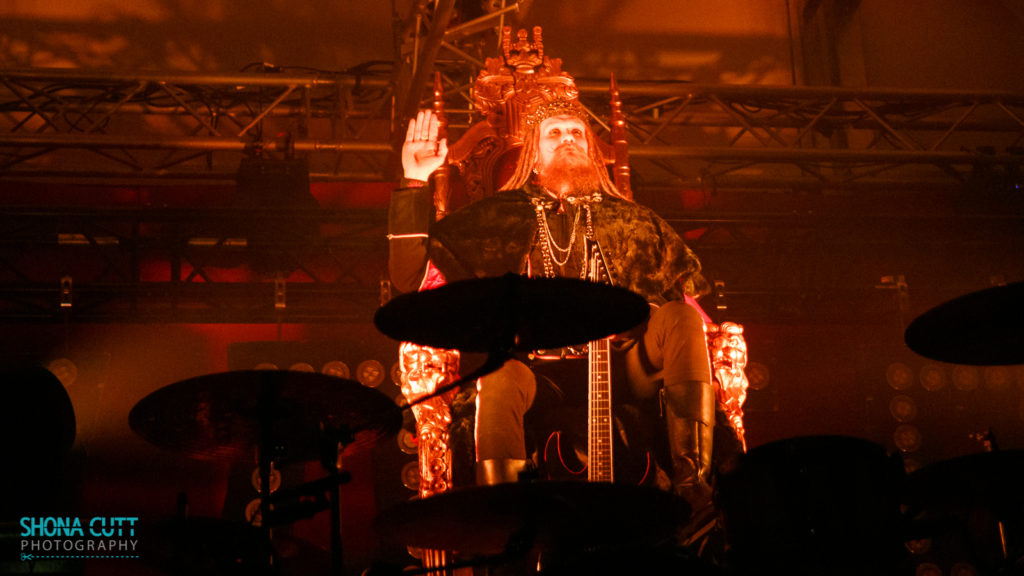 They certainly know how to make an entrance, with ‘national anthem’ Glory to Our King playing as the curtain drops and the Kungen himself (dreadlocked guitarist Jonas Jarlsby) begins his slightly wobbly ascent atop his golden throne to appear at the rear of the stage, adopting a suitably regal pose. As he reaches for his guitar to play those distinctive opening notes to A Statue of the King, harlequin frontman Johannes Eckerström – equal parts The Joker and Alice Cooper (who clearly hasn’t asked for his cane back yet) – strides up to his lectern to declaim the lyrics. 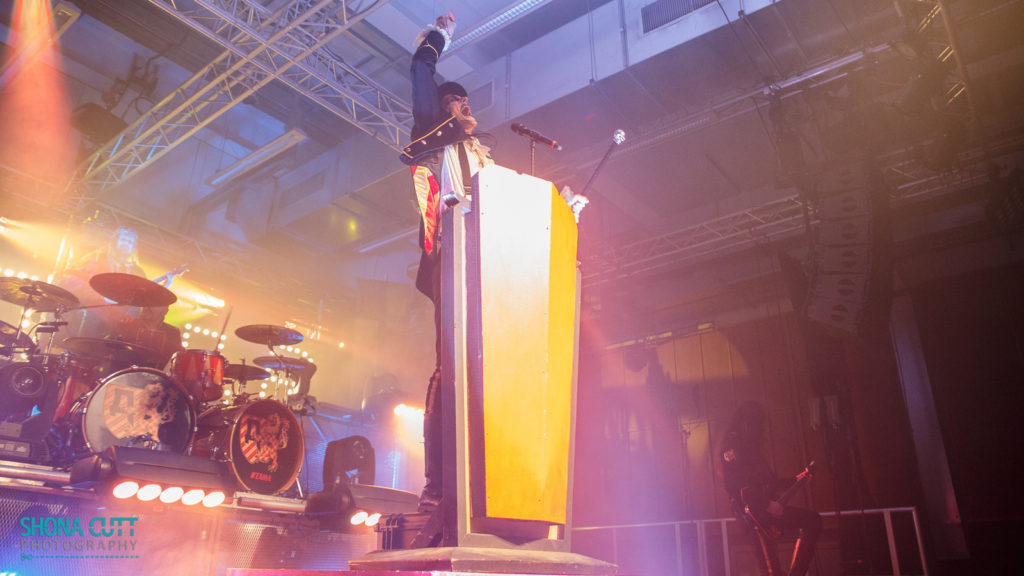 Legend of the King follows (yup, every song on the Avatar Country concept album has the word ‘king’ in the title), with Eckerström offering his monarch an exaggerated bow as he’s ushered down the steps. Meanwhile, a team of nattily dressed roadies in matching waistcoats swiftly manhandle his throne onto a pyro-shooting dais at the front of the stage. 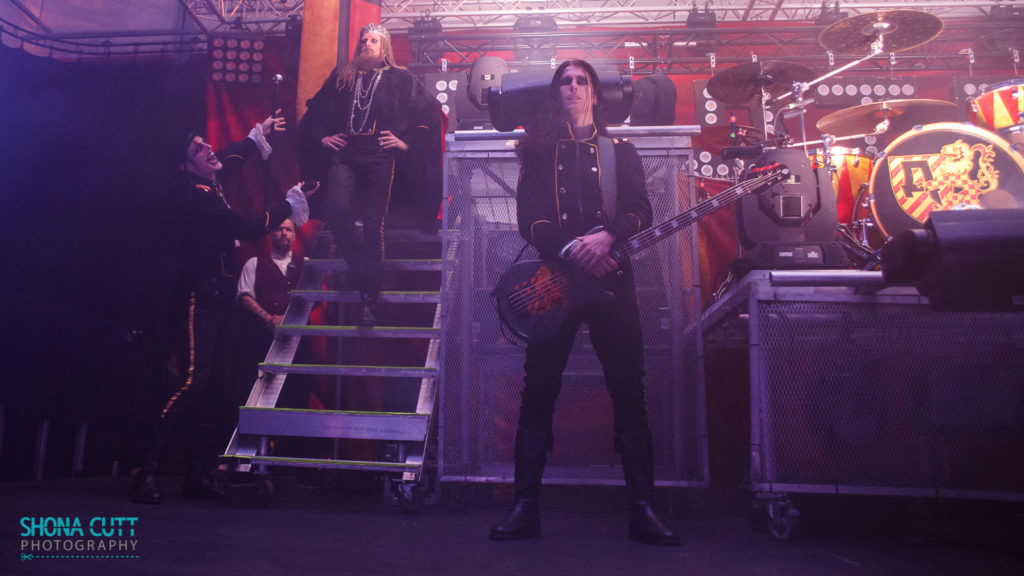 Things calm down a little on the theatrical front after that, as the props are removed and Jarlsby divests himself of those heavy robes. All this entertaining dressing-up box fun would wear thin pretty quickly if there wasn’t some substance to the music. Like fellow countrymen Ghost, Avatar certainly deliver on that front. 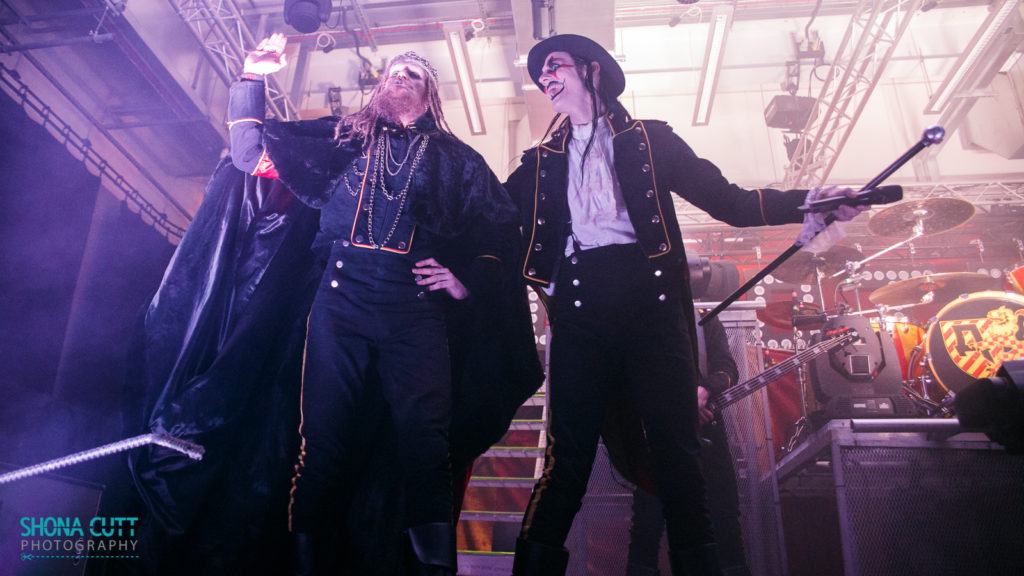 Underneath all the finery, Jarlsby is an exceptional guitarist who trades imaginative, multi-faceted solos with Tim Öhrström, and for each big, punchy, riff-driven, singalong crowd-pleaser like Bloody Angel there’s a The King Welcomes You to Avatar Country, which ventures gleefully beyond genre bounds into a bizarre lounge muzak breakdown. 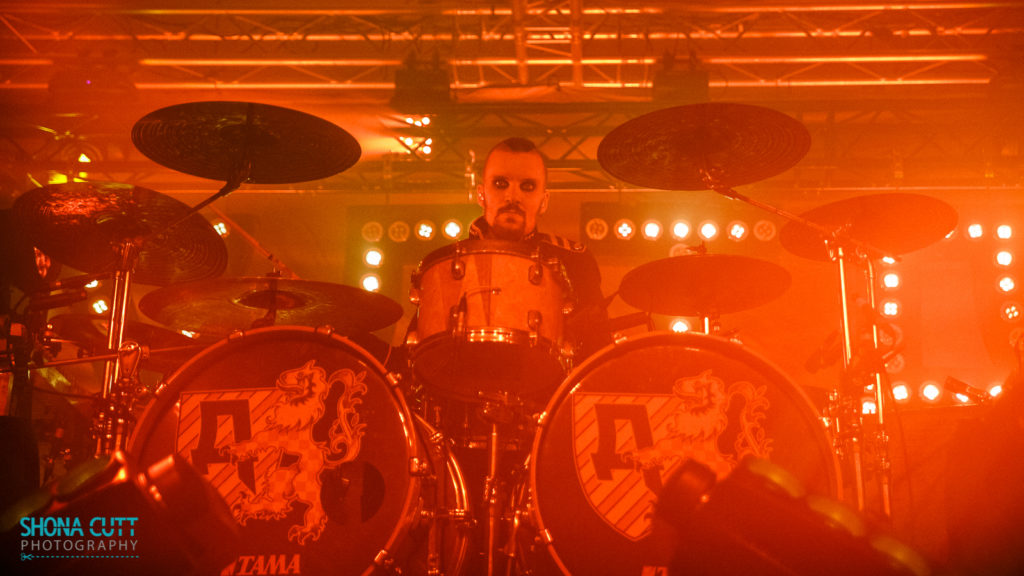 Drummer John Alfredsson gives it plenty of his patented thousand yard stare as he beats out those tattoos and it’s a pleasure to finally hear bassist Henrik Sandelin, who was mysteriously absent from the Halestorm tour. 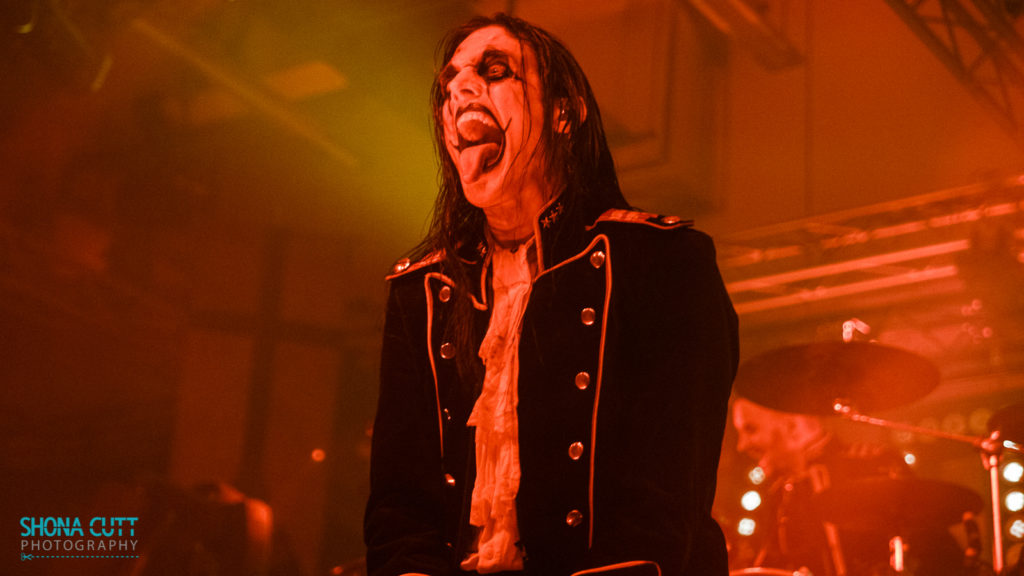 Tongue dangling from his mouth like an over-excited dog hanging out of the window of a speeding car, charismatic ringmaster Eckerström is not only equally adept at the full-blooded death metal roar and Rob Halford shriek but also does dark, brooding and sinister pretty effectively. 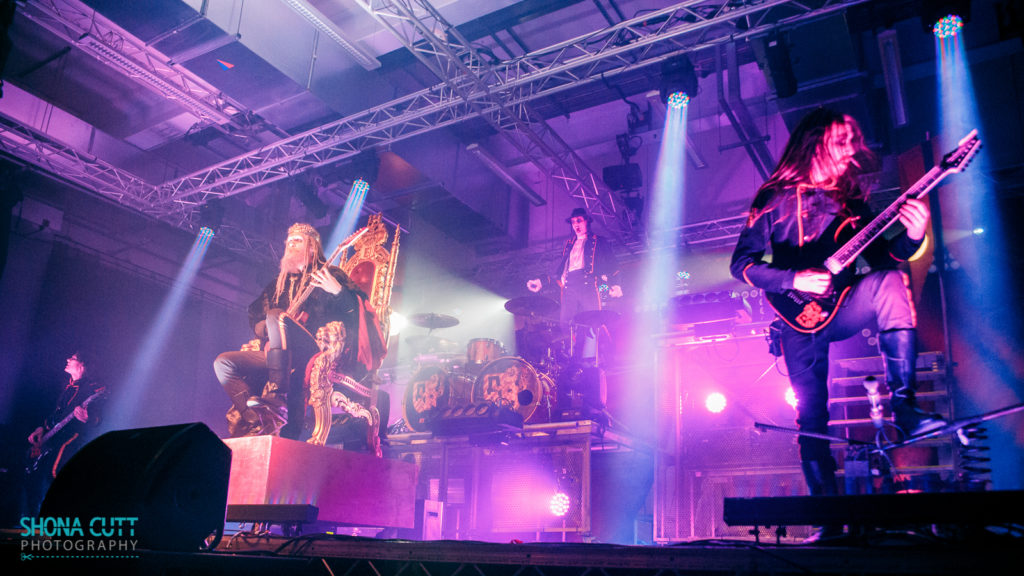 Much of Avatar Country gets an airing. If they’re tiring of playing it after so long, there’s no sign of it in this relentless, high-energy performance. The only disappointment is that they still don’t attempt the album’s concluding eight-minute two-part instrumental Silent Songs of the King, which is as proggy and atmospheric a slice of avant-metal as you’ll hear anywhere. 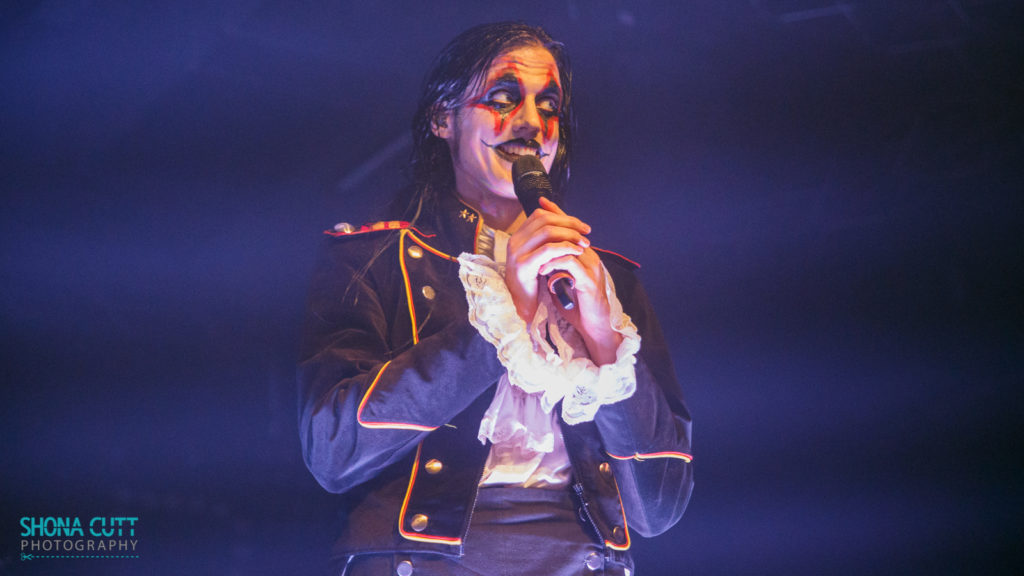 They can’t resist another costume change, as black tunics are swapped for white ones, and Eckerström prefaces the concluding Hail the Apocalypse – cue: bubble machine, possibly also half-inched from Mr. Cooper – with a lengthy monologue about how metal never dates or goes out of style because it never had the slightest interest in being in style. The incorrigible sweaty and slap-smudged showman is preaching to the choir, of course, but we lap it up nonetheless.