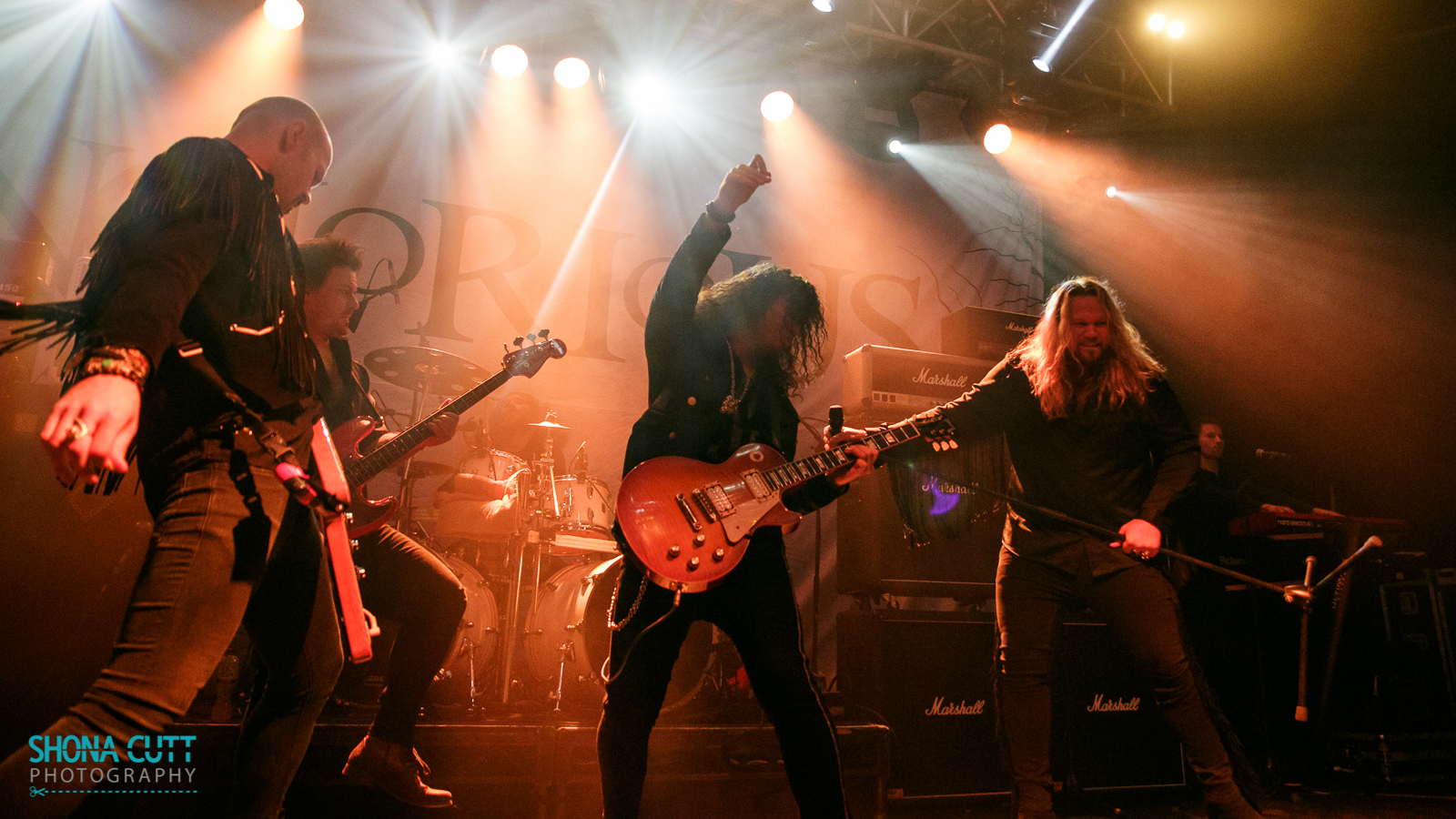 Last time we saw Bristol’s very own Flowerpot, supporting CJ Wildheart at the Thekla, they’d just ditched the covers but still seemed to be trying to work out what kind of band they wanted to be. 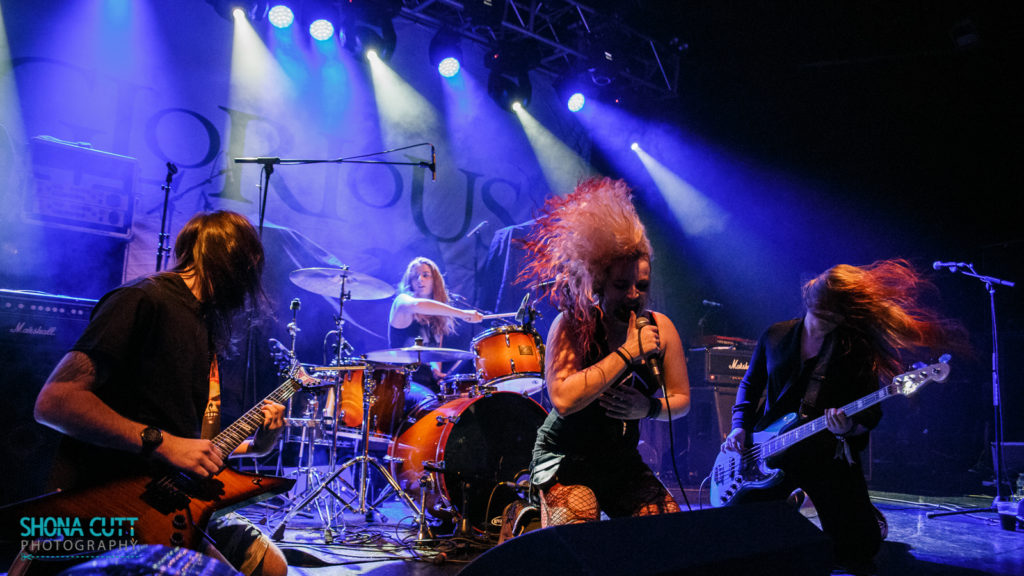 It could have gone either way, with a trip down indie street just as likely as a more agreeable incursion into rock territory. Now it appears that a decision has been made: they’re going to rock, and do it in as raunchy a fashion as possible. Hurrah! 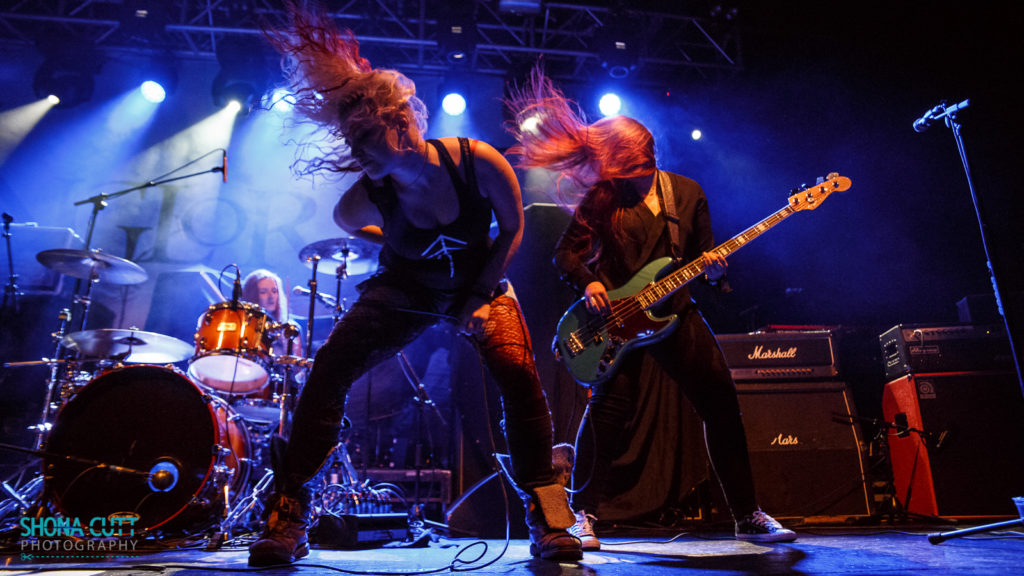 There’s been another change since we last saw them. Previously, Flowerpot were an all-girl trio. Now there are four of the blighters. And thanks to this reviewer’s advanced observational skills, it can be confirmed that the new addition is a chap. Tom gives them the power in the guitar department that their high-energy rhythm section needs. And while frontwoman Steph is struggling with a heavy cold tonight, snotting and snuffling her way through the first few songs, she succeeds in wrangling her voice back on track by the end of Flowerpot’s warmly received 30 minute set. 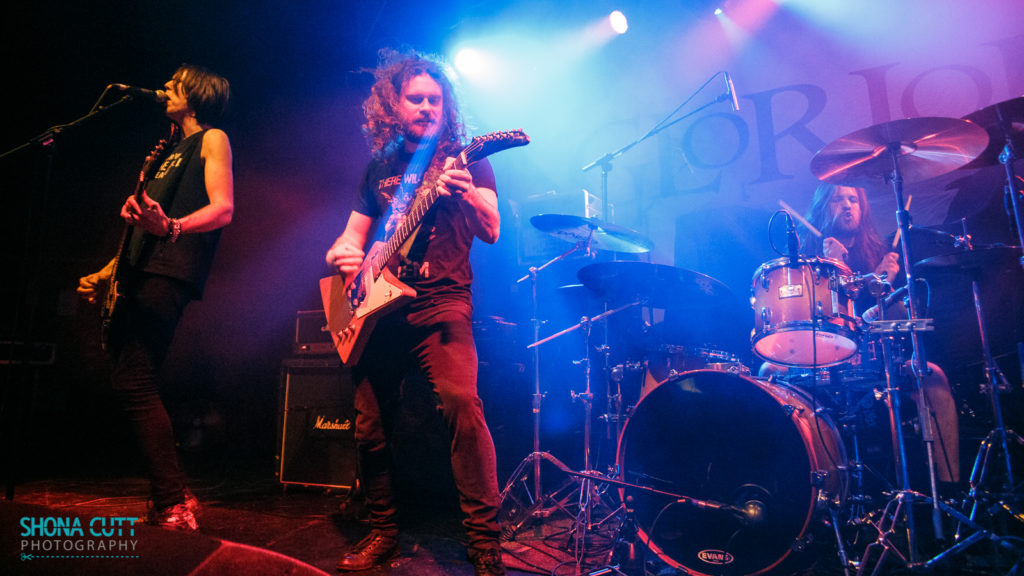 London’s City of Thieves aren’t reinventing the wheel. Hell, they aren’t even reinventing the power trio format. But they do have a bunch of driving, frill-free hard rock songs that manage for the most part to be more than the sum of their influences – although Fuel and Alcohol and Animal suggest that they may have had occasion to listen to an AC/DC record or two – or, at the very least, an Airbourne one. 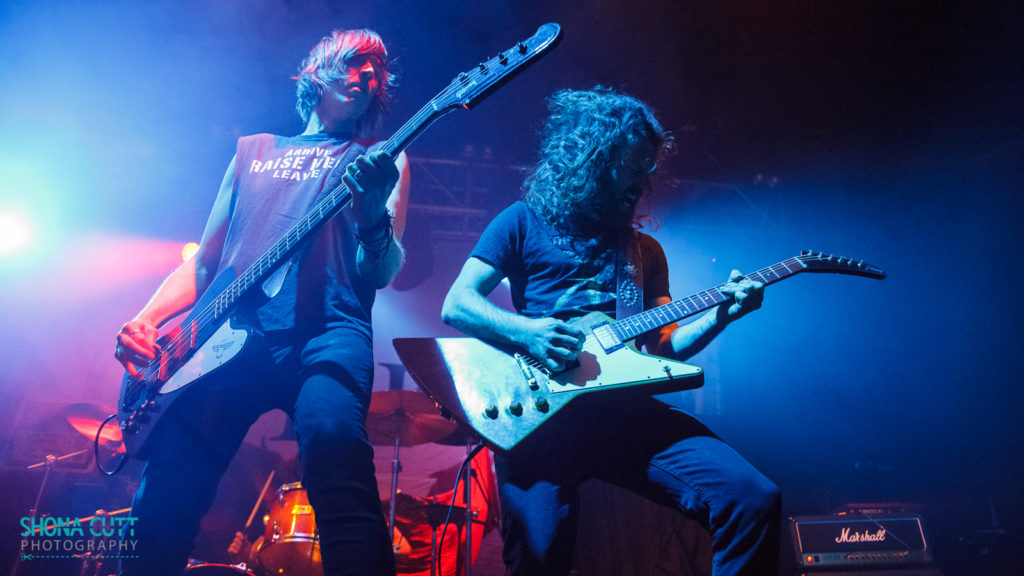 Their rabble-rousing work here being done, bassist/vocalist Jamie Lailey thanks us pointedly for supporting new music rather than further enriching the “retirement circuit”. 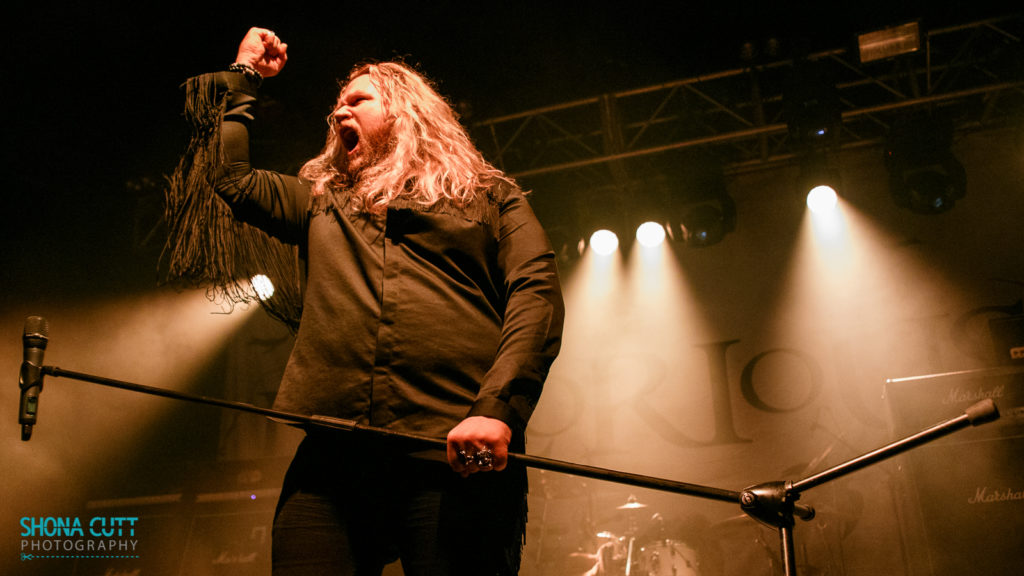 “It’s been a hell of a year,” admits Nathan James, with considerable understatement. Yep, he hasn’t exactly covered himself in, erm, glory of late. Losing three members of your band on the eve of your biggest-ever tour and subsequently unleashing an ill-judged, much-ridiculed rant online are not the greatest of career moves. But the former reality TV star (The Voice, Superstar) is blessed with a voice that’s at least as big as his ego and is in chastened and conciliatory mood tonight, thanking the departed trio for their contribution to new album Ride to Nowhere and clearly eager to move on with his mission to Make Britain Rock Again. 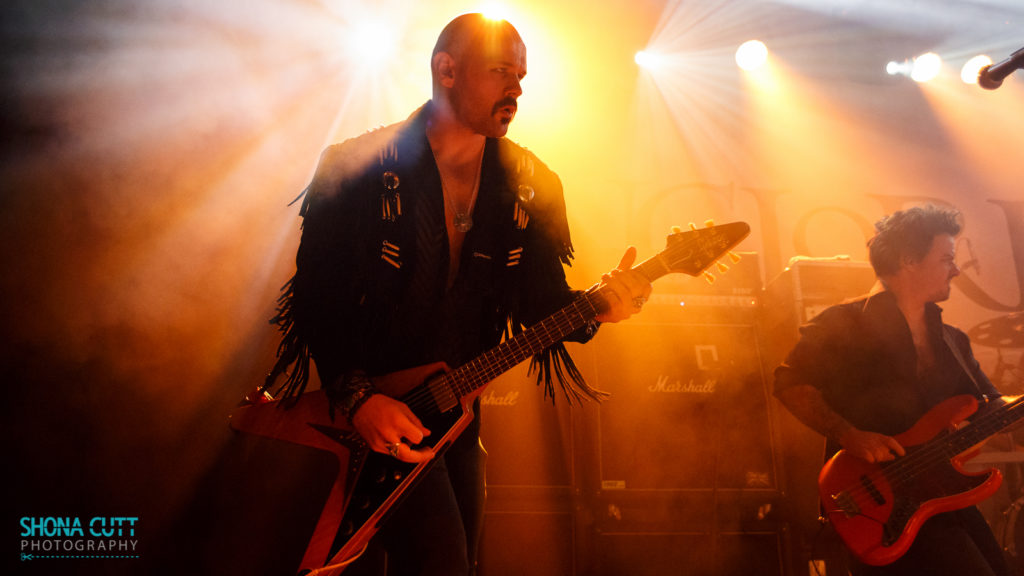 ‘Rock’ in this context is of the defiantly old-school variety, since James makes no secret of his influences – chiefly Deep Purple and Whitesnake. Following support slots here with The Winery Dogs and Steel Panther, and at the Bierkeller with Last in Line, this is Inglorious’s first headline show in Bristol. If the Academy seems a tad ambitious, they certainly succeed in filling the floor if not the balcony, with James’s folks up from Devon to join the enthusiastic audience in cheering him on. 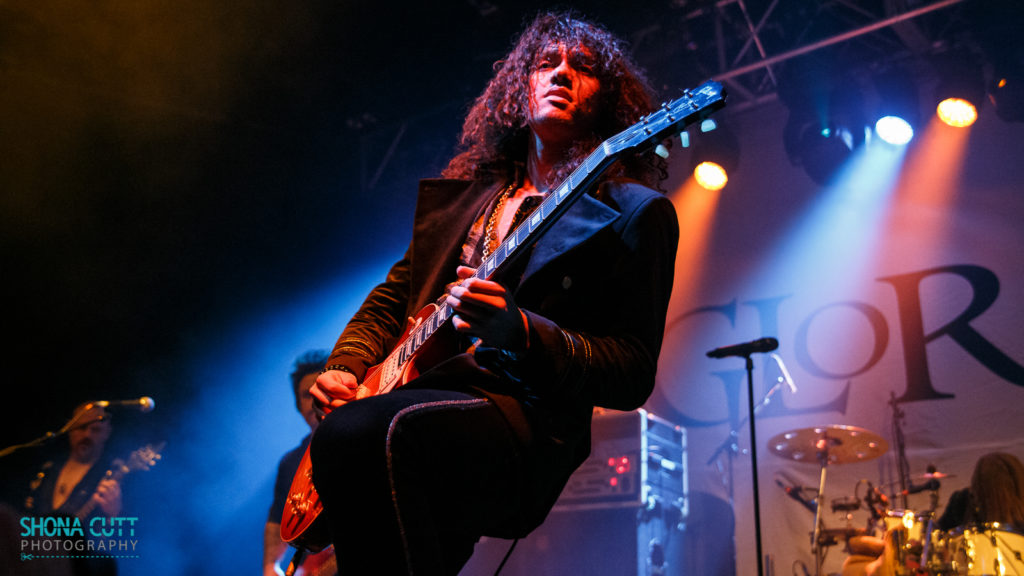 The fear was that since the majority of the musicians on stage haven’t played on any of Inglorious’s three albums, including the new one that came out just four days ago, they wouldn’t really feel like a band. But they’ve obviously put the rehearsal work in and succeed in pulling it off so impressively that anyone who wasn’t aware of the ructions might be forgiven for assuming they’ve been doing this for years. Particularly impressive is 19-year-old (I’ll repeat that: 19-year-old) whizzkid lead guitarist Danny Dela Cruz, who exudes precocious confidence. In fact, they’re actually a six-piece tonight, with a semi-detached keyboard player who’s never introduced and is hidden so far away in a corner that he might as well have remained in the dressing room. 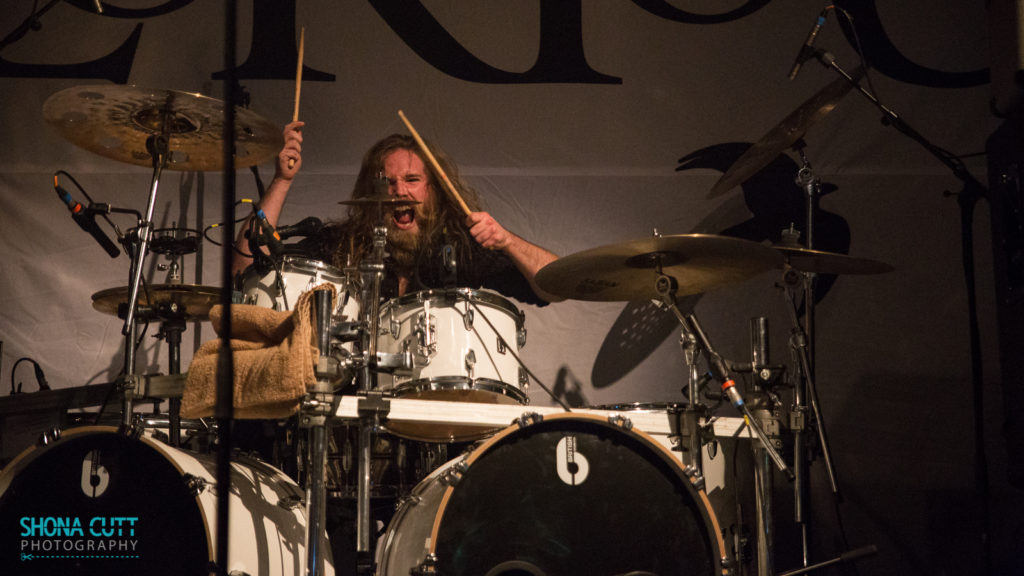 Sometimes those influences shine through a little too strongly. Making Me Pay could have been drawn from the early ’80s Whitesnake songbook, while I Don’t Need Your Loving wouldn’t sound out of context in the funked-up Glenn Hughes-era Deep Purple. But there are some surprises here as well. Somerset’s very own Phil Beaver, whose name never ceases to delight the crowd, steps out from behind his kit in Harry-from-Thunder style to join in the mellow Glory Days on acoustic guitar, which provides James with another showcase for his vocal versatility. And if you were to attempt to predict a song that Inglorious might choose to cover, you probably wouldn’t go for Alanis Morissette’s Uninvited, from the City of Angels soundtrack. Their version replicates the repeated four-note piano intro but then ditches the orchestration to rework it as a heavy rock anthem climaxing with an extended Danny Dela Cruz guitar solo. But, hey, the only conceivable reason for playing a cover version is to make it your own. 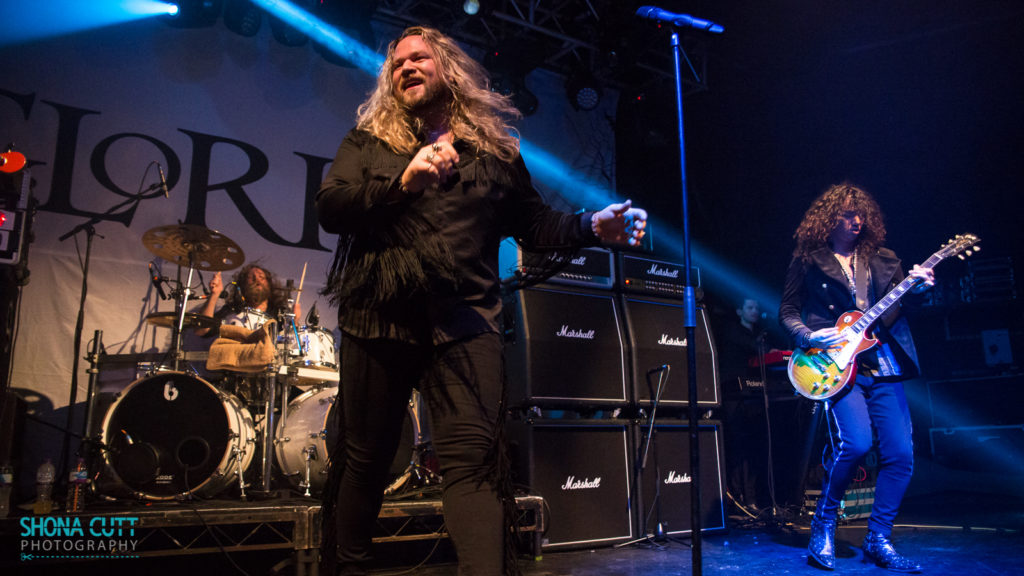 Not to be upstaged by his limelight-hogging whippersnapper guitarist, James sneaks offstage for a swift costume change into – Ooooh! – his spangly sequinned shirt for the thunderous title track of Ride to Nowhere, which proves to be the show’s highlight. Alongside Liar, which follows, this sounds abolutely enormous, underlining the fact that Inglorious are at their best when pushing the heaviness boundary. 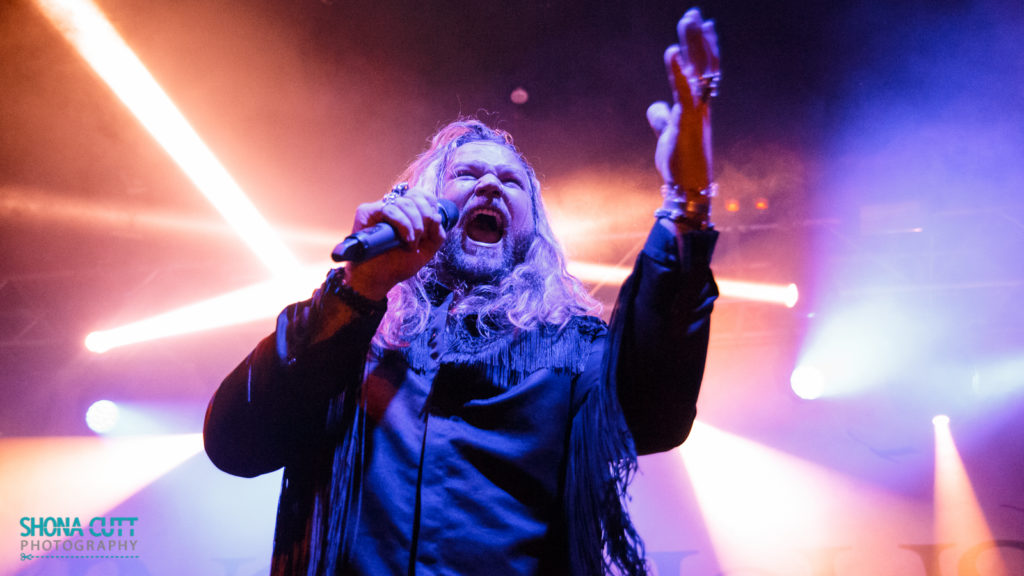 As is perhaps appropriate for a fella who did that TV talent show audition for the title role in Jesus Christ Superstar, James appears from on high (the balcony) and comes among his worshipful flock for the encores of Holy Water and Until I Die, those jaws of defeat being obliged to skulk off to steal someone else’s victory.