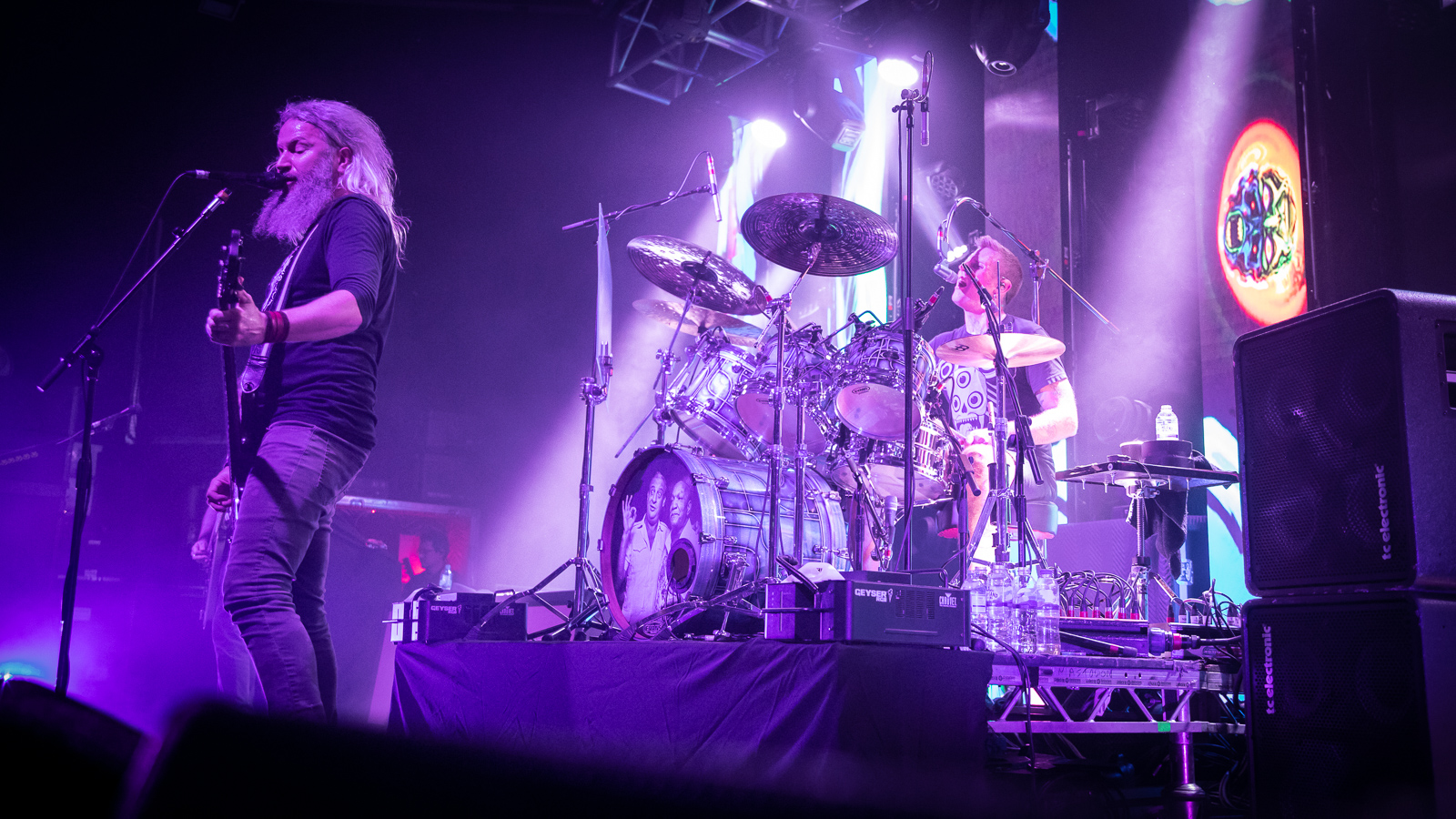 Ivar Nikolaisen might be the newest member of Norway’s Kvelertak (that’s ‘stranglehold’, grapple’n’S&M fans), having replaced Erlend Hjelvik last summer, but he’s wasted no time in stamping his mark on the band. 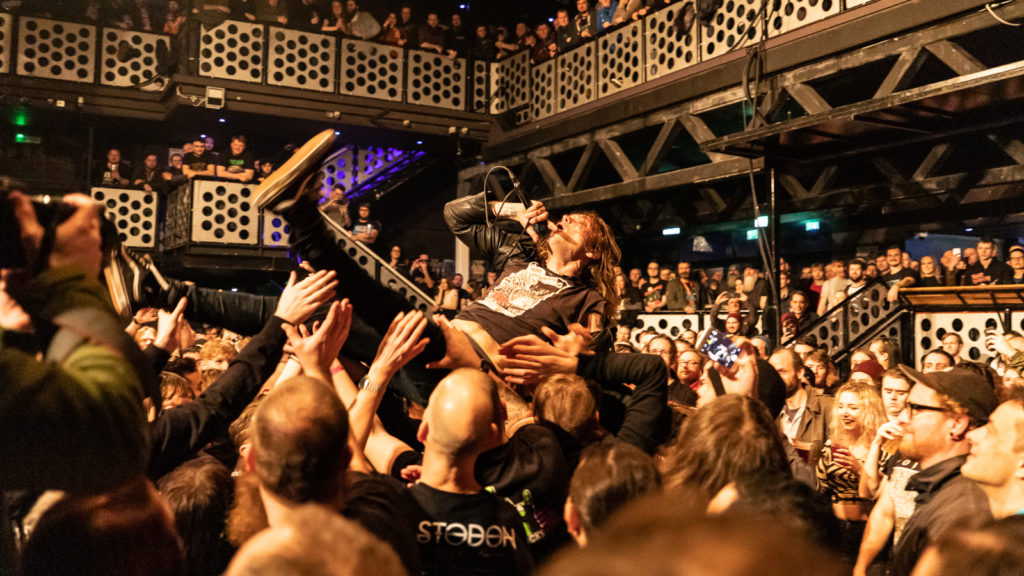 A bucket of elephant tranquilisers would be required to fell this hoarse Norseman as he not only rampages about the stage but spends so much time crowd-surfing around the packed Academy that security could be forgiven for thinking he’s a wildly-over-excited member of the audience. 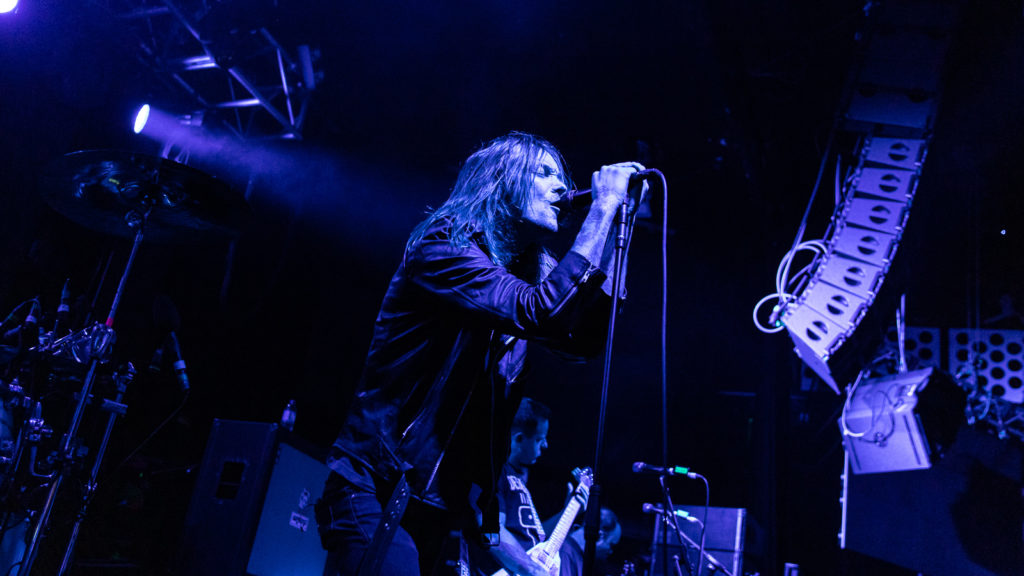 Down in the musical engine room, Kvelertak’s impressive triple-guitar attack really makes sense on stage, drawing out the powerful tension in their music between multiple styles. 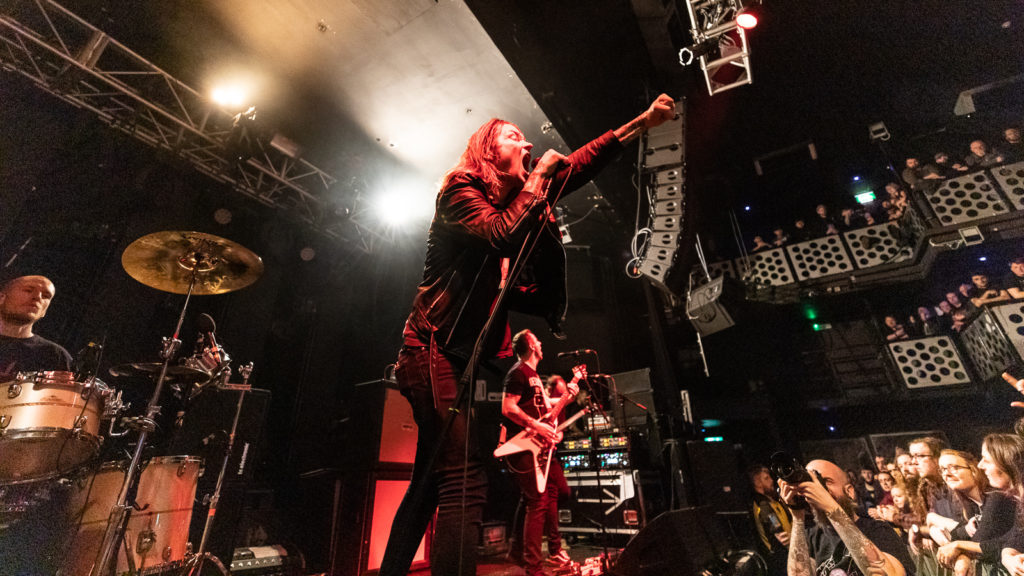 Strip away those harsh vocals from the splendid 1985, for example, and you could be listening to a melodic metal song built on an old-school chugging riff. Little wonder they choose to describe themselves simply as “a band that plays rock music”. 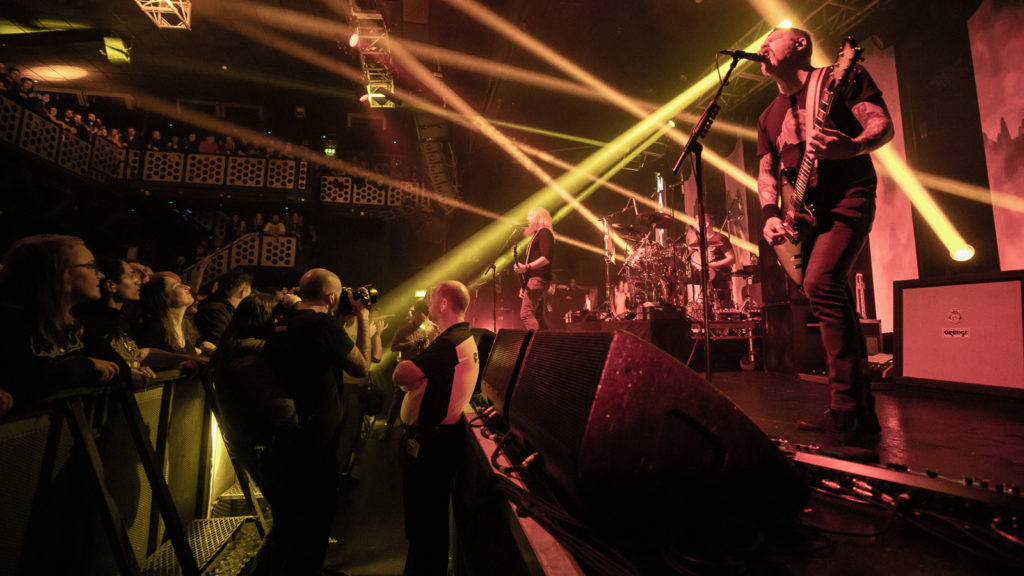 Atlanta innovators Mastodon have also built a hugely successful career straddling genres, bringing together punters who’d never listen to prog-metal with those who avoid sludge metal in one big happy, sweaty and frequently beardy family. So much so, in fact, that this is their second successive sell-out show at the Academy and they can now command eye-watering merch prices. (£70 for a hoodie? Hold it right there while I arrange a second mortgage…) 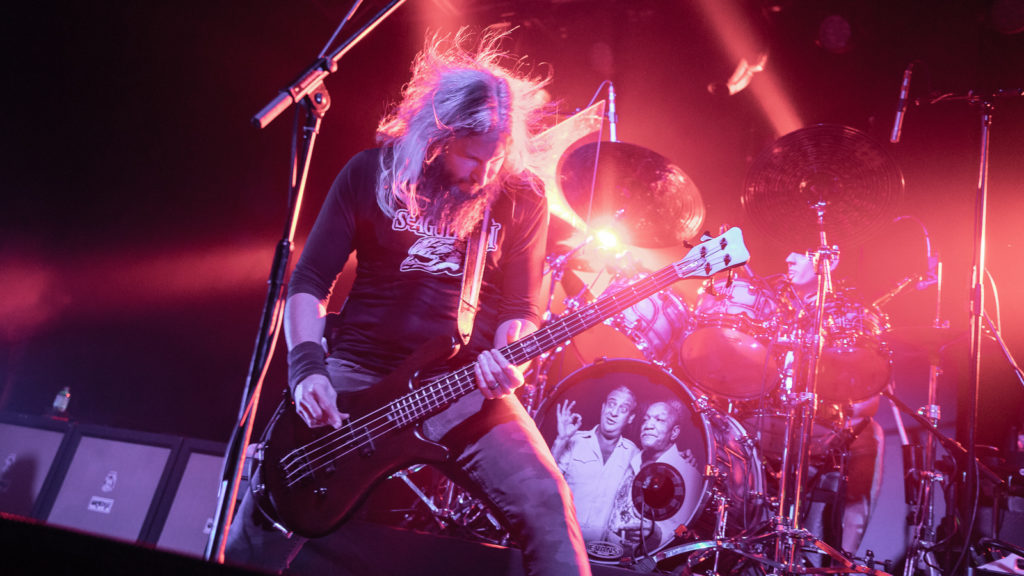 Aptly for those of us who endured a drenching in the long queue snaking round the back of the Academy, they use Singin’ in the Rain as an intro tape before hitting us with a triple-whammy of crowd-favourites: Iron Tusk, March of the Fire Ants and Mother Puncher. 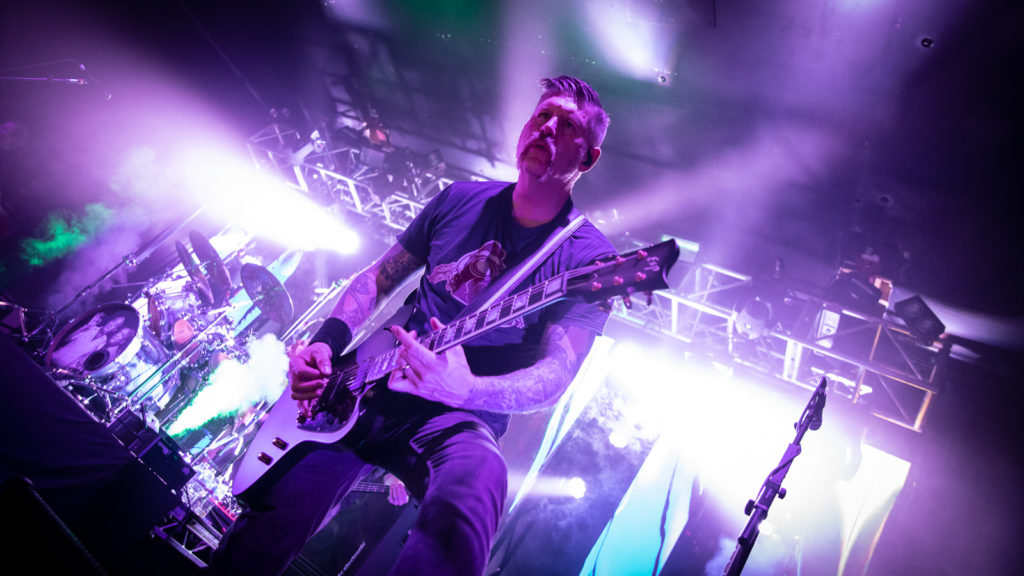 Bristol was missed out on last year’s Emperor of Sand tour promoting Mastodon’s current Grammy nominated album, which is perhaps one reason why they opt for a balanced set drawing material evenly from their entire career. The other reason will become apparent later with a Surprise Guest Appearance. 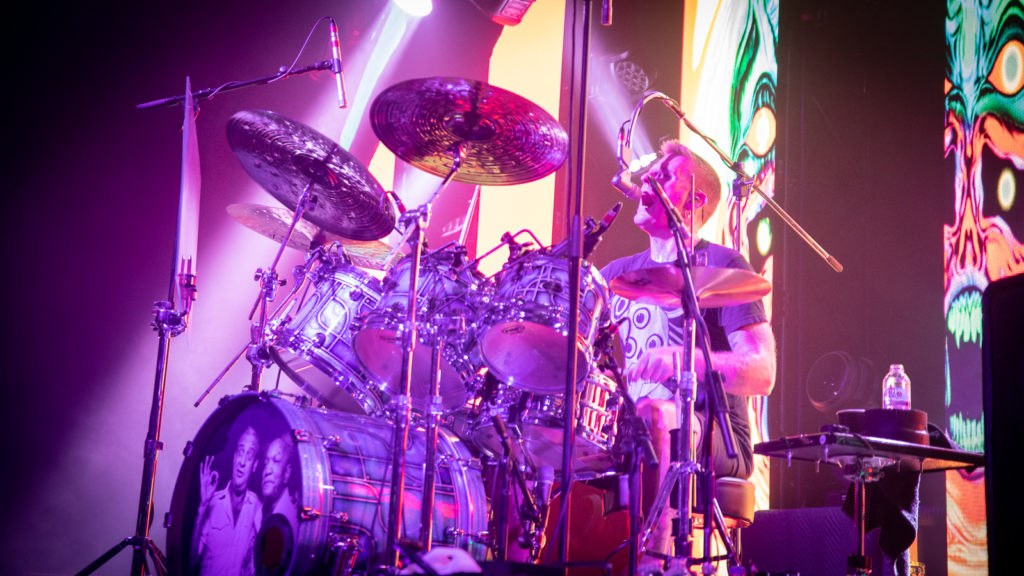 Interestingly tattooed, Flying V-wielding Brent Hinds makes that intricate guitar interplay with Bill Kelliher seem so effortless, while drummer Brann Dailor and frontman/bassist Troy Sanders – still rocking the mountain man look – form one of the most potent rhythm sections in all of metal. 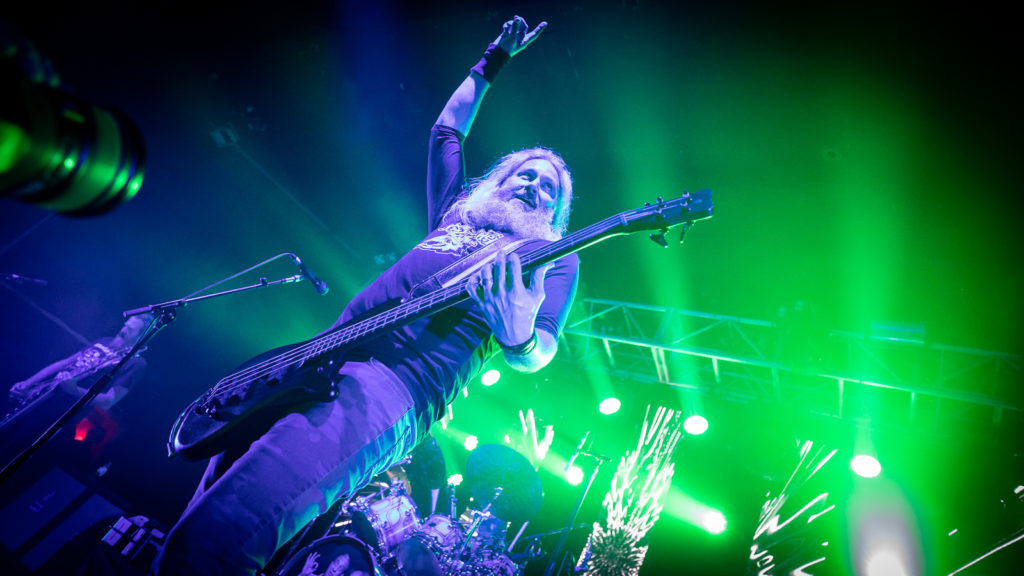 Dailor, in particular, is the kind of drummer you could happily watch all evening, his busy, jazz-influenced style frequently wrongfooting headbangers with its polyrhythms and imaginative fills. What’s more, the talented bastard also manages to take lead vocals on a number of songs, including the stunning Steambreather. Tonight’s amusing bass drum pic? Vintage comedians Rodney Dangerfield and Redd Foxx. How come? Who knows… 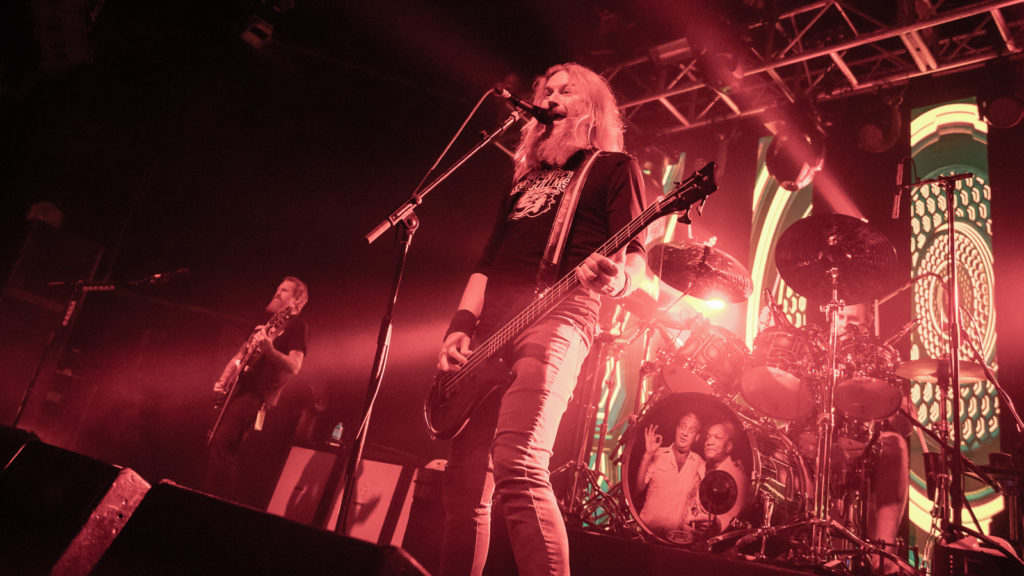 It’s an intense, exhilarating show that mostly eschews Mastodon’s snappier numbers (No Curl of the Burl, High Road or even the Grammy-winning Sultan’s Curse tonight) in favour of the darker, heavier yet unfailingly melodic stuff, the breakthrough Leviathan album being revisited comprehensively. This means the under-appreciated Once More ‘Round the Sun, which dominated the set last time, is a tad overlooked, though Chimes at Midnight proves an early highlight. Emperor of Sand has also yielded its fair share of new fan favourites, including the roar-along anthem Ancient Kingdom. 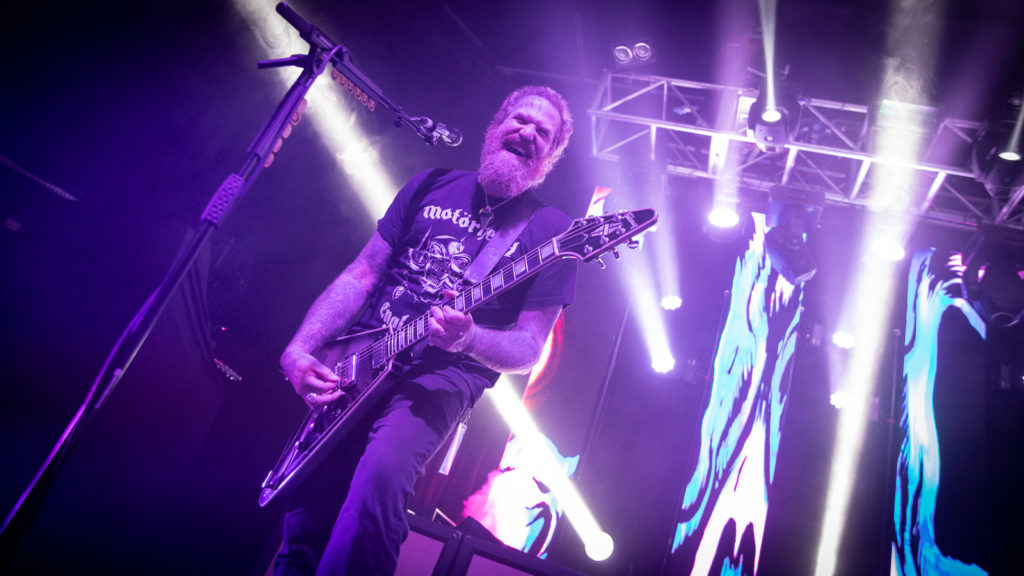 Mastodon are not the kind of band given to much audience interaction, letting psychedelic projections do the showmanship work, with a complementary light show whose metal boundary-stretching palette throws up some novel combinations (purple and lime green, anyone?). 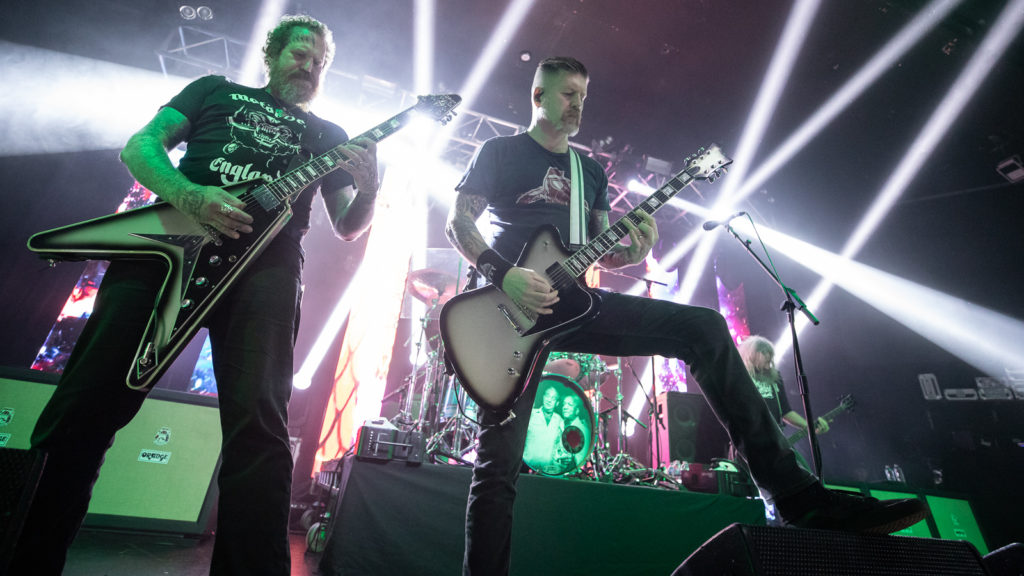 Rather like all those bands who claimed to be influenced by Motörhead and went on to eclipse them commercially, Mastodon worship at the altar of one particular influential cult act of whom the casual fan may be forgiven for being ignorant. The difference is that they’ve invited Neurosis co-founder Scott Kelly to contribute guest vocals to a track on all but one of their albums. And tonight, they’ve brought him along to perform each and every one of them in the concluding part of the show. 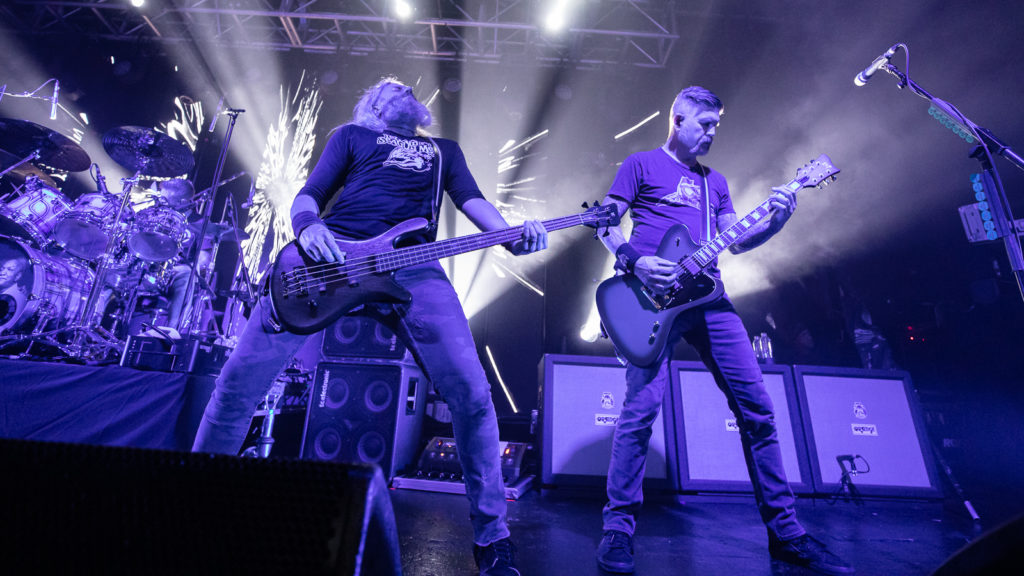 This makes for a scintillating and relentless lengthy climax, topped with a return to Leviathan for the irresistible Blood and Thunder, whose choppy stop-start riff sends the crowd suitably apeshit. “Thank you for making us bigger and better than ever,” says Hinds. No problem, pal. Now, any chance of credit terms on one of those £30 T-shirts?