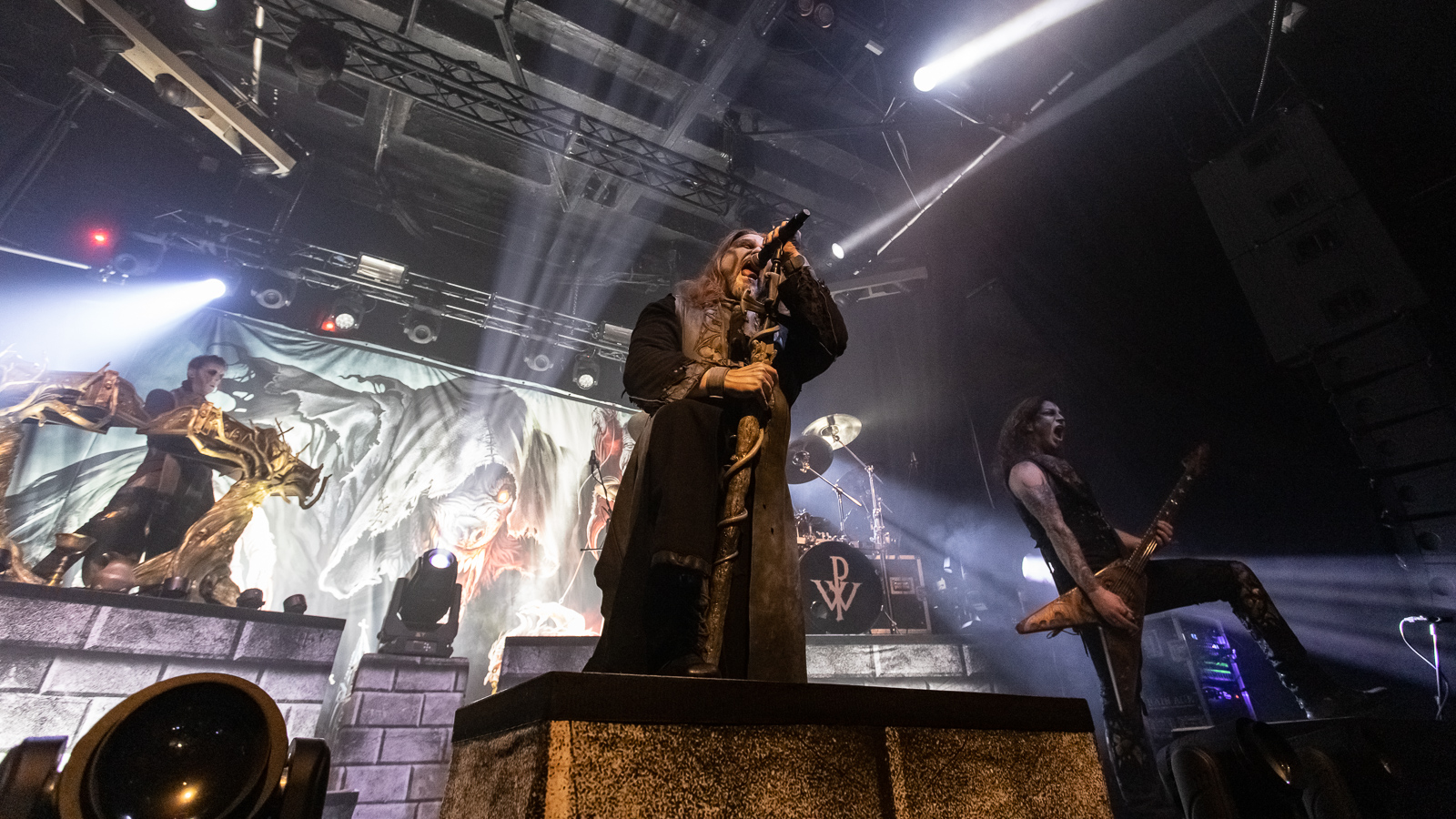 Filling SWX at 6:30pm on a Monday evening is no mean achievement, but tonight’s openers Kissin’ Dynamite are on a self-appointed mission to “bring back stadium rock”. They’ve certainly brought the meat. They’ve also brought the potatoes. Hell, they’ve even brought the talkbox. It’s like Peter Frampton never went away. 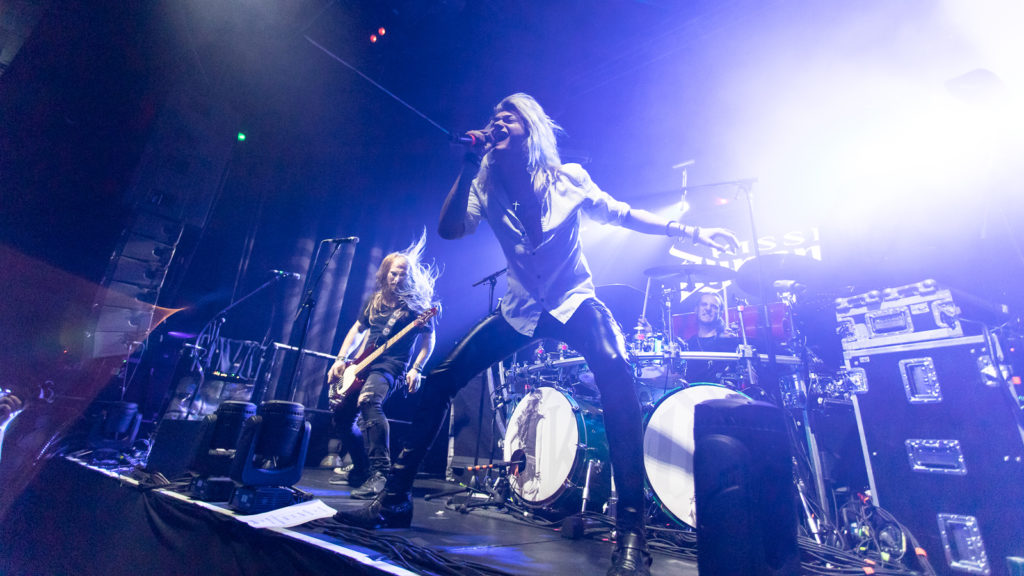 You want striking originality, challenging the audience and pushing the bounds of metal? You’ve got the wrong band, pal. Something of an archetypal German metal act, Kissin’ Dynamite trade in big, sturdy old-skool anthems with titles like I’ve Got the Fire, driven along by huge ‘Woah-oh!’ singalong choruses and performed with much Judas Priest-style synchronised headbanging. 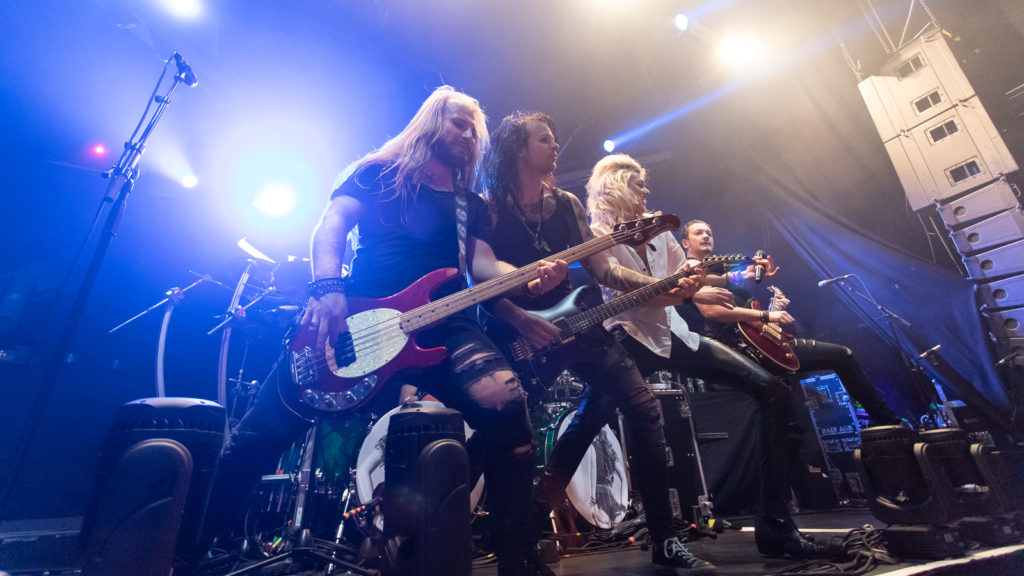 This stuff never fell out of fashion back home and now there’s a whole new audience for it over here. When they climax with a human pyramid, it’s a safe bet that many in this crowd are too young to know that Kissin’ Dynamite’s fellow countryman the Scorpions used to do exactly the same thing before they got too creaky to pull it off. 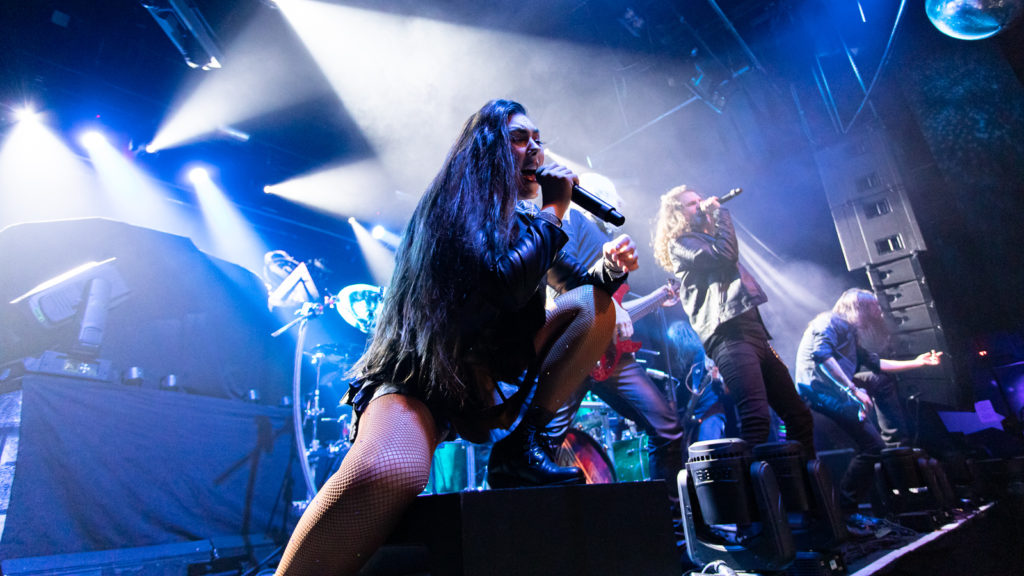 The Swedish/Danish filling in this German sandwich, Amaranthe’s USP is their three vocalists. Henrik Englund Wilhelmsson assumes death metal growling duties, Nils Molin does the traditional metal hollering and, unusually for a woman in this genre, Elize Ryd adopts a mainstream pop style rather than taking the operatic or paint-stripping screech approach. 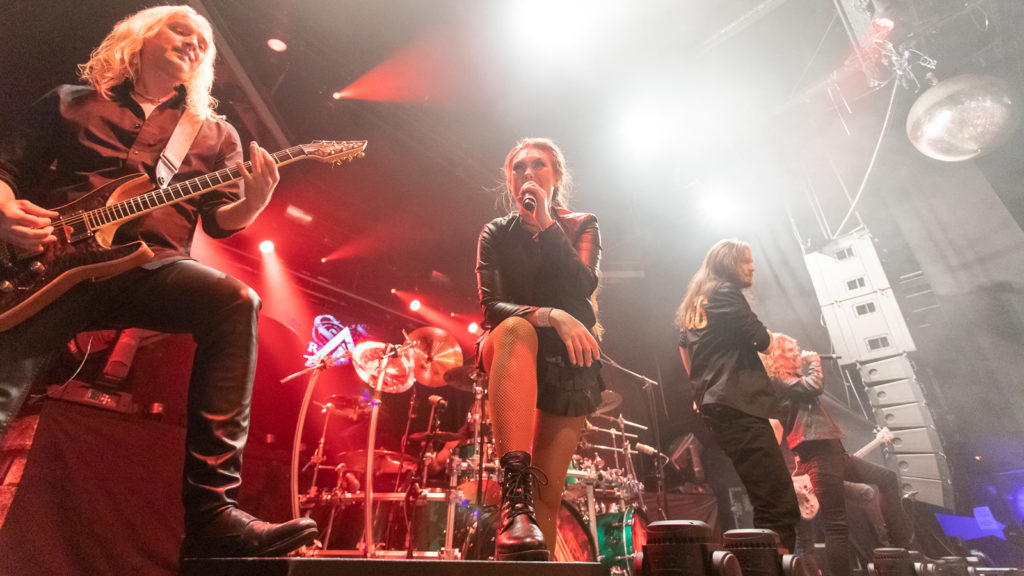 Beneath the metal bonnet, their repertoire consists of perky, upbeat Euro-pop, swathed in programmed synth sounds. Little wonder pigeonholers have struggled with a style that occasionally sounds like Rihanna meets Meshuggah, mostly settling for ‘metalcore’. 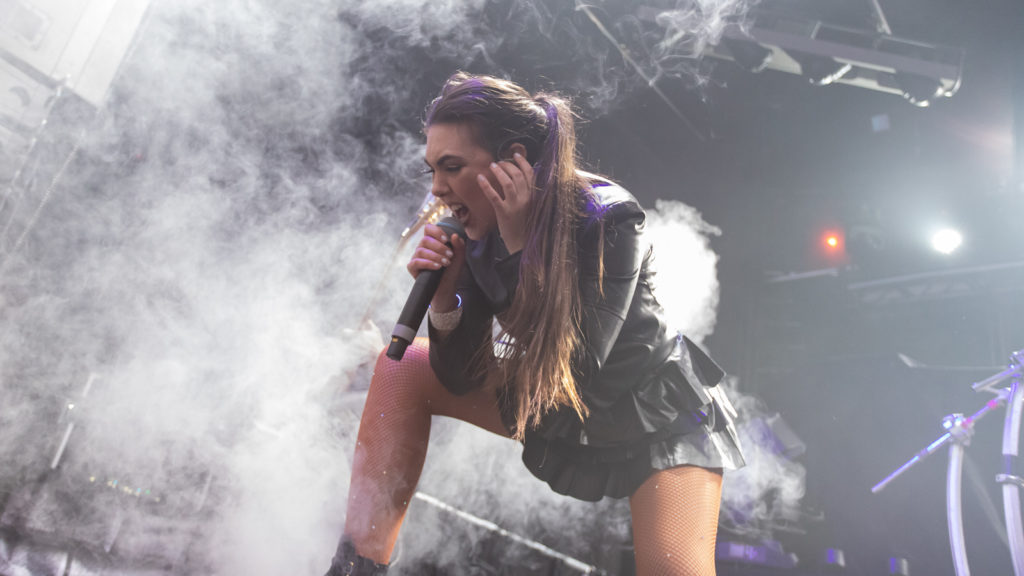 That said, the guitar, bass and drums provide a much-needed organic anchor, making this stuff way too heavy to act as a gateway drug for pop kids. Having three vocalists performing solo or in various combinations certainly proves effective, with Elize headbanging, shadow-boxing and high-kicking her way through the show as though rehearsing for her own workout video, while, impressively, hitting every note. 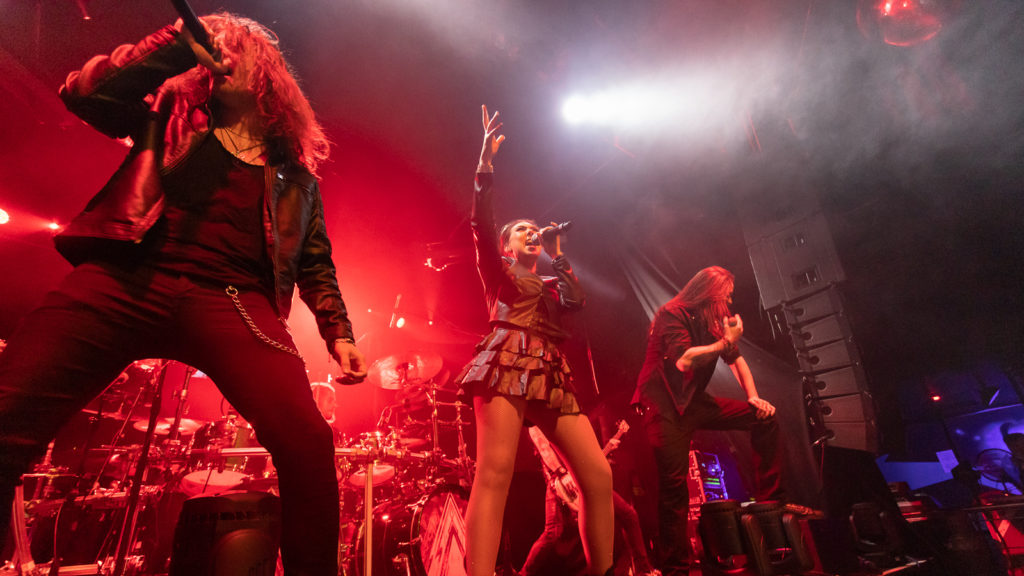 And just when you start to wish they’d dial down the programmed stuff a notch or two, they unleash the semi-ballad Amaranthine, which proves to be the highlight of their set. 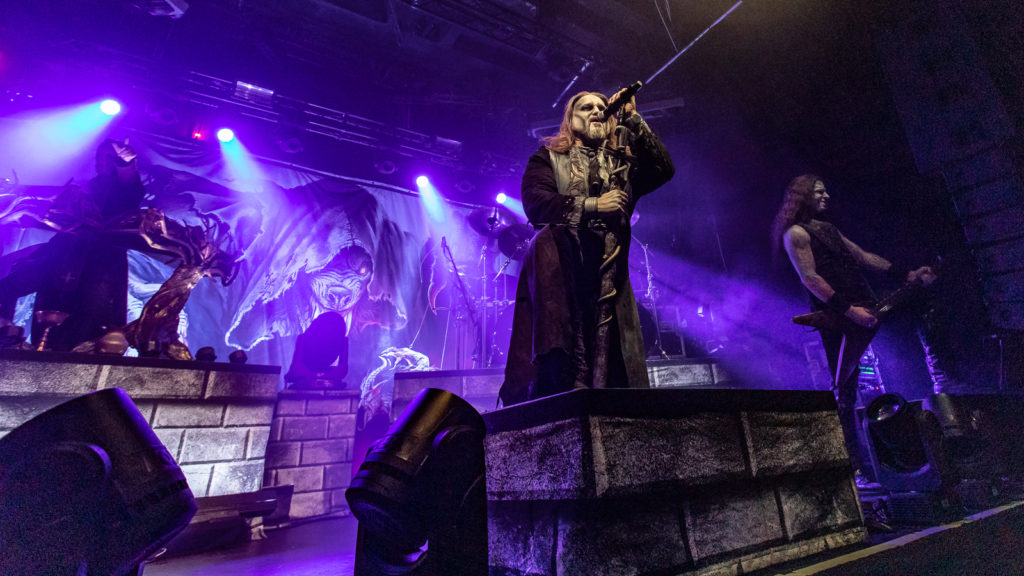 Somewhere outside, beneath the heavy cloud cover, there’s a super blood wolf moon. This would have been a handy prop for German power metal titans Powerwolf, who are used to headlining Europe’s biggest arenas but have had to scale back their show somewhat to squeeze into English venues. No pyro tonight, alas. But they have brought the artificial snow machine, which is nice. 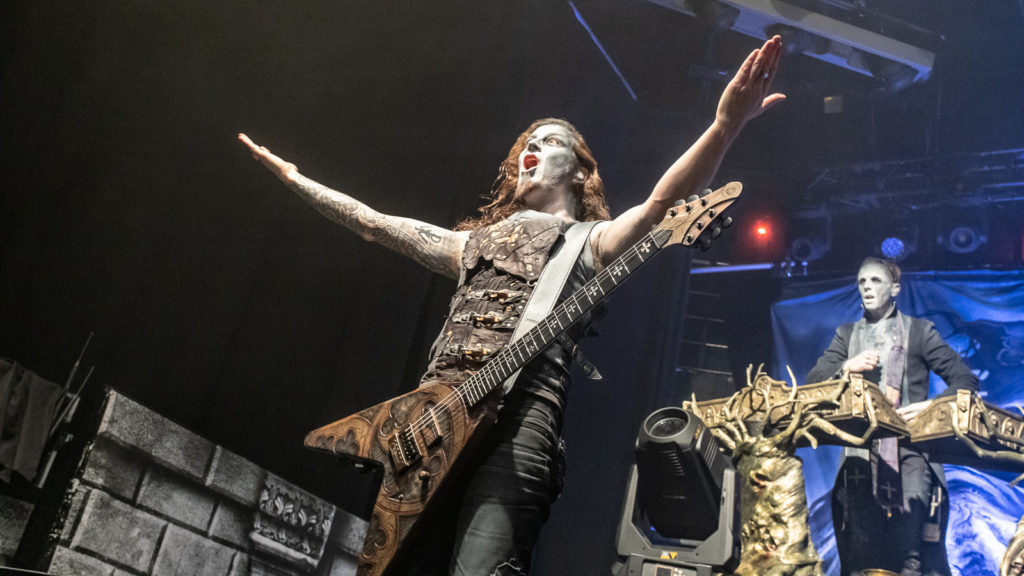 A smattering of German accents among the audience suggests that our Euro-chums are out in force, unable to believe their luck at witnessing the band at such close quarters. But this is hardly on the same scale as that time when Jimmy Barnes played the Bierkeller and every Australian in Bristol turned up. Indeed, a later show of hands reveals that some 90% of the children of the night in attendance have never seen Powerwolf before, although a large proportion of them know all the words. 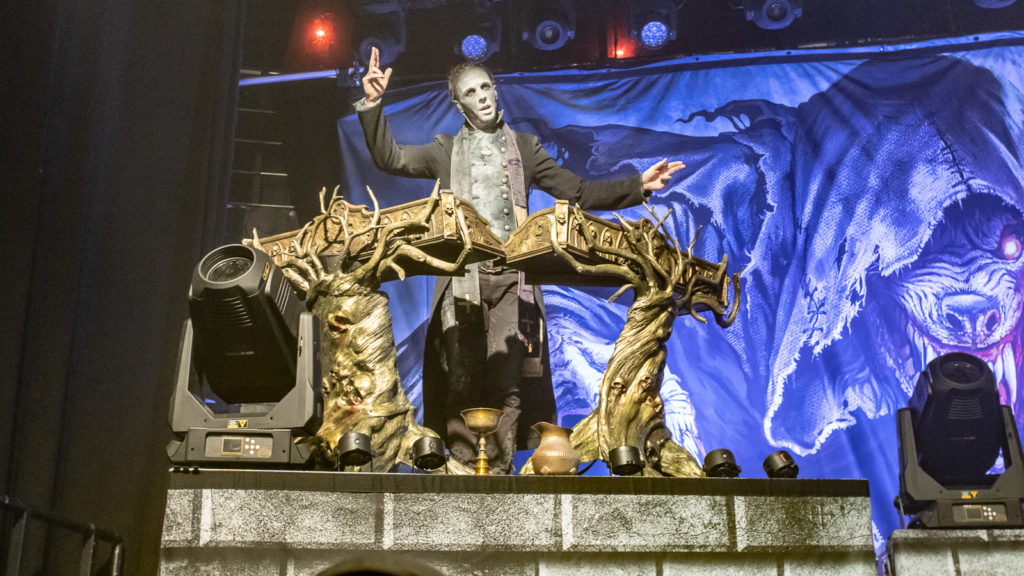 When British bands perform power metal, they tend to do so with an overt wink and a smirk. Think DragonForce and their trampolines or Alestorm and their duck. Trust the Germans to play it absolutely straight, while clearly having a great deal of fun beneath their corpse paint. 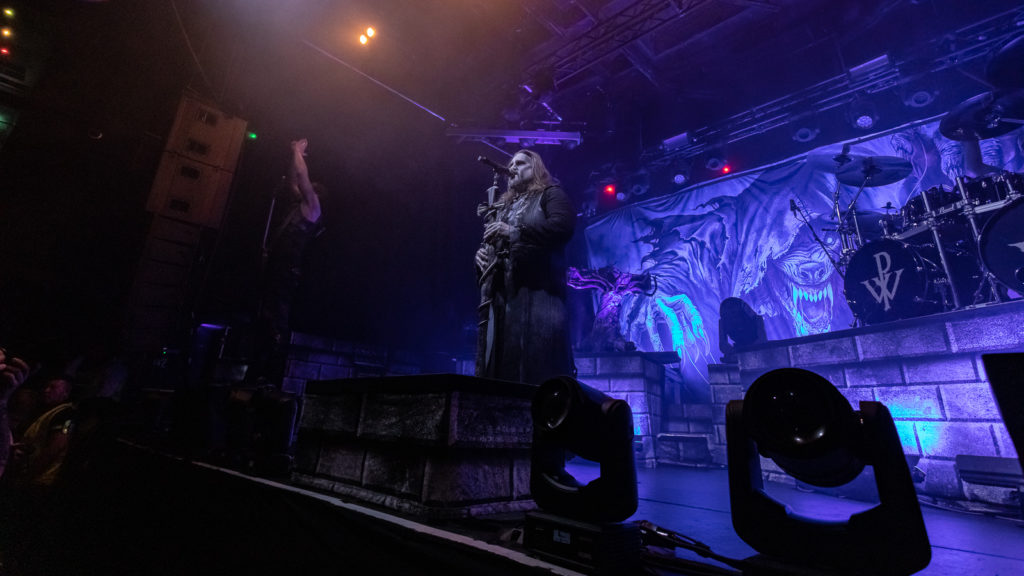 The mammoth drum kit and ornate keyboard stand, each mounted on their own riser, both get a huge cheer as they’re unveiled, such is the eager anticipation for Powerwolf’s first Bristol show. And although this probably ranks as a tiny club by their standards, they give us the full two-hour set with as many of the trimmings as they can squeeze in. 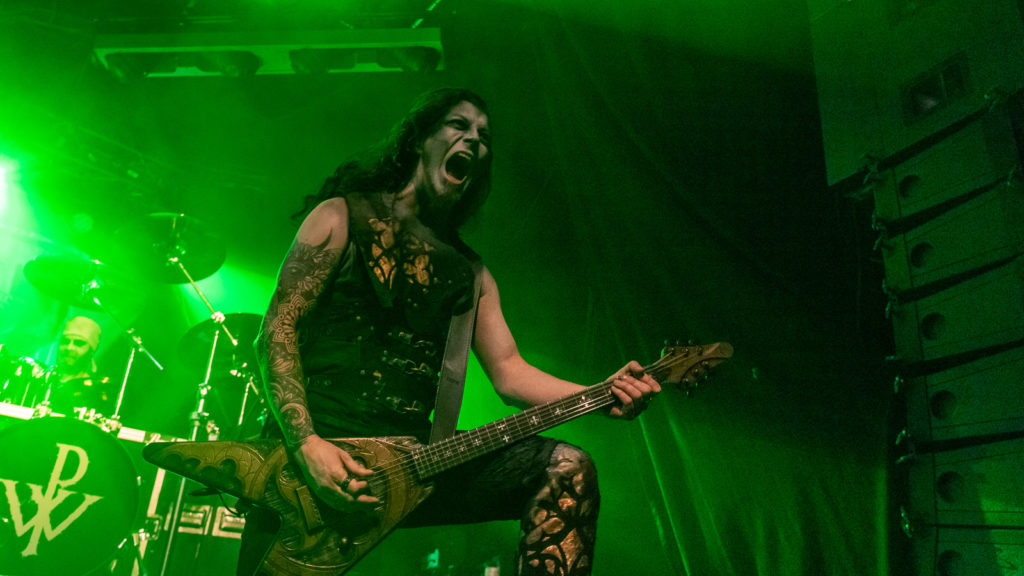 Frontman Attila Dorn is a suitably imposing figure, but the constraints of his heavy coat mean that he doesn’t exactly skip about. That kind of behaviour is left to guitarist duo Matthew and Charles Greywolf (possibly not their real names) and Falk Maria Schlegel, a skinny keyboard player in the Flake-from-Rammstein mould who takes every available opportunity to bound from behind his instrument and gallivant around the stage. 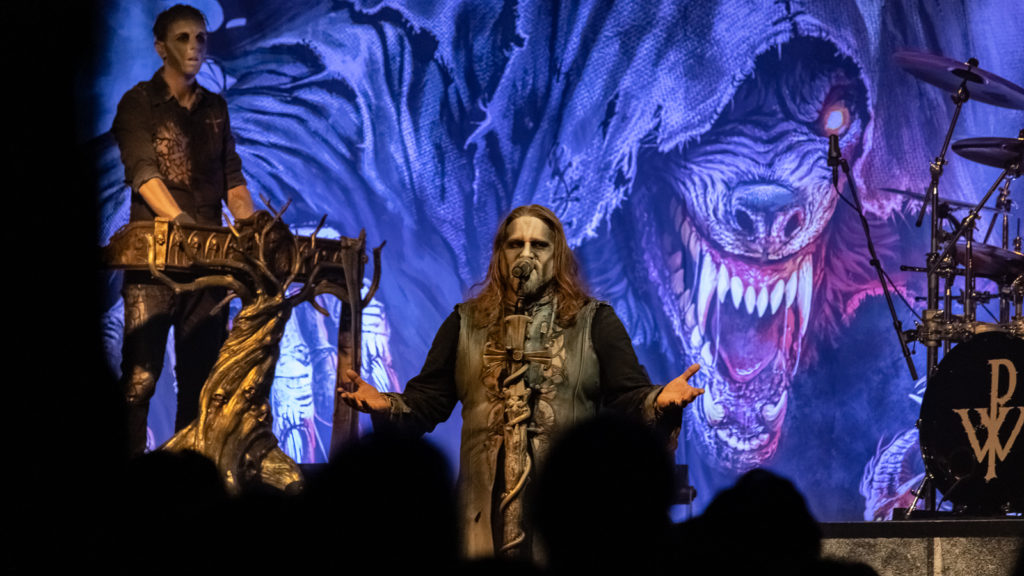 Blessed with a suitably sonorous baritone voice, Dorn asks us at various points throughout the evening whether we wish to participate in their holy heavy metal mass or join their heavy metal army, and seeks to confirm that we are possessed by metal. Naturally, our rich panto heritage has taught us to reply emphatically in the affirmative. He also leads us though an amusingly complex four-part singalong, sighing like a weary, disappointed schoolteacher whenever we get it wrong. 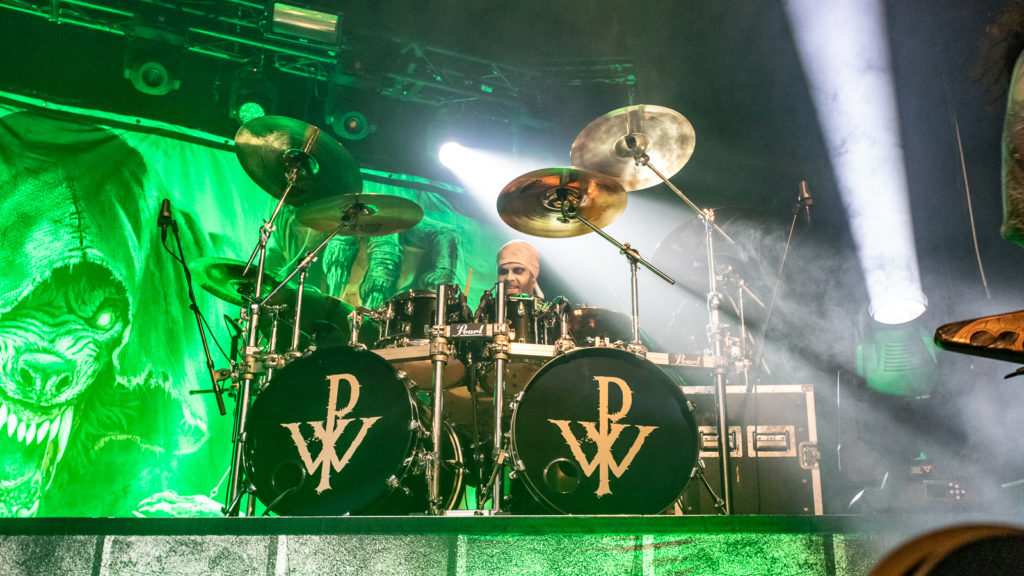 Songwise, Powerwolf’s oeuvre comprises grand, soaring, gothic anthems about vampires and werewolves, although Demons are a Girl’s Best Friend feels like a swerve into Lordi territory. It’s all served up with a smattering of Ghost-style cod Catholic liturgy (a roadie in a monk’s cowl toddles on to hand Mr. Dorn a thurible for Incense and Iron) and no shortage of ribaldry. Those of us for whom this is appropriate are invited to clutch our testicles during Coleus Sanctus (that’s almost ‘Holy Balls’, if my half-remembered schoolboy level Latin continues to serve me). 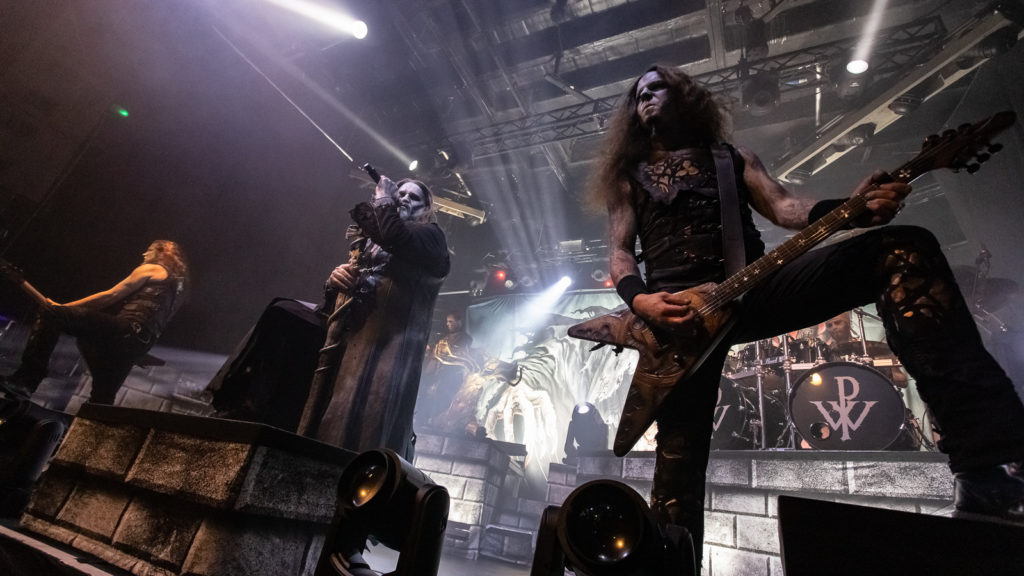 The highlight is a gargantuan Stossgebet from the current Sacrament of Sin album, whose lyrics are delivered in a mix of chanted ropy Latin and guttural German. This is the only real disappointment about Powerwolf: their native tongue is so well suited to metal that it’s a shame they choose to perform so many of their songs in English.