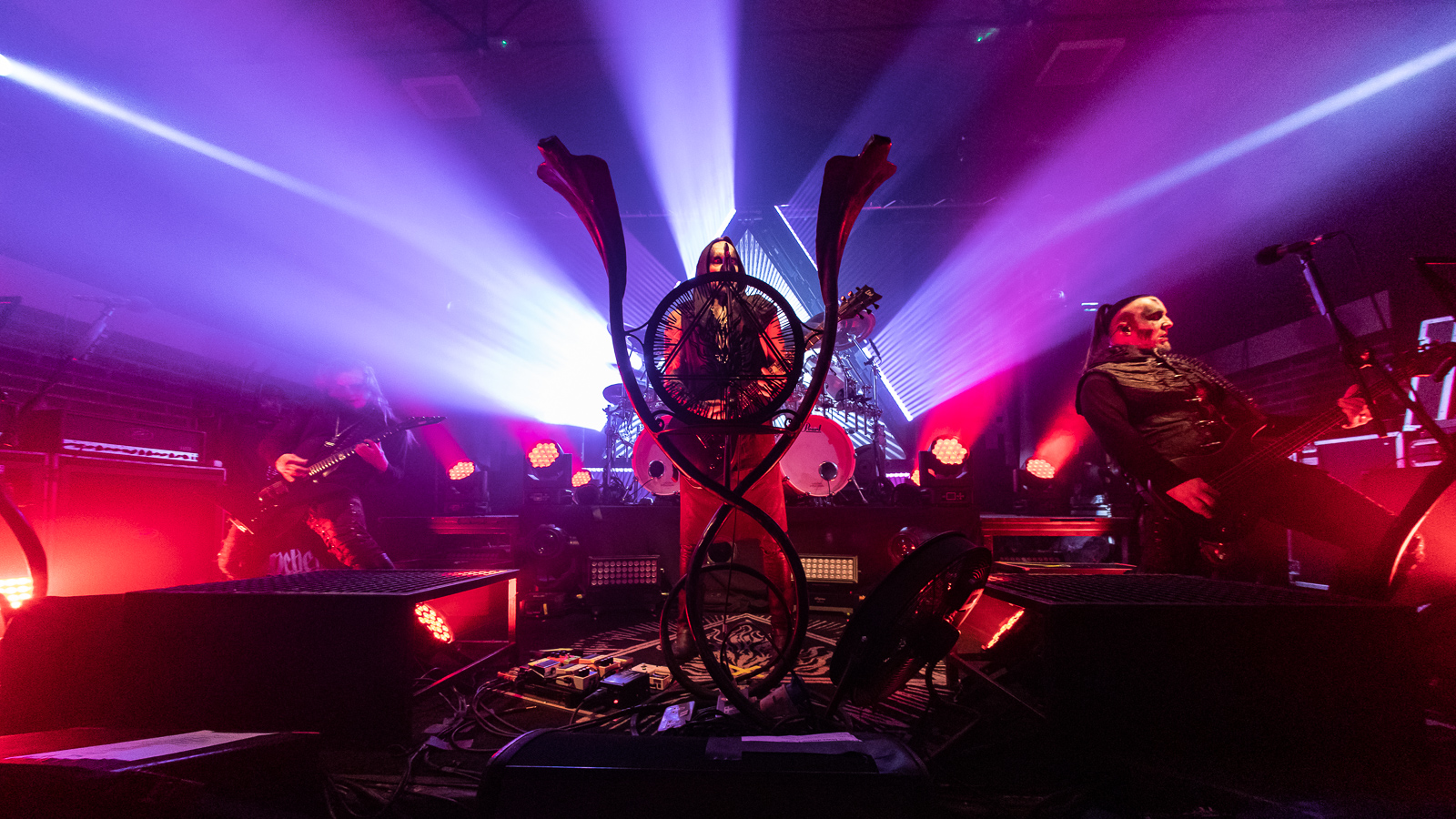 The trouble with being ahead of your time is that while you may be able to bathe in the limited glory of cult success, it can take ages for your audience to turn up. Behemoth and At the Gates last played Bristol 14 years and 23 years ago respectively. Those were tiny, under-attended gigs. Tonight they’ve packed Motion on the first night of a sold-out UK tour. 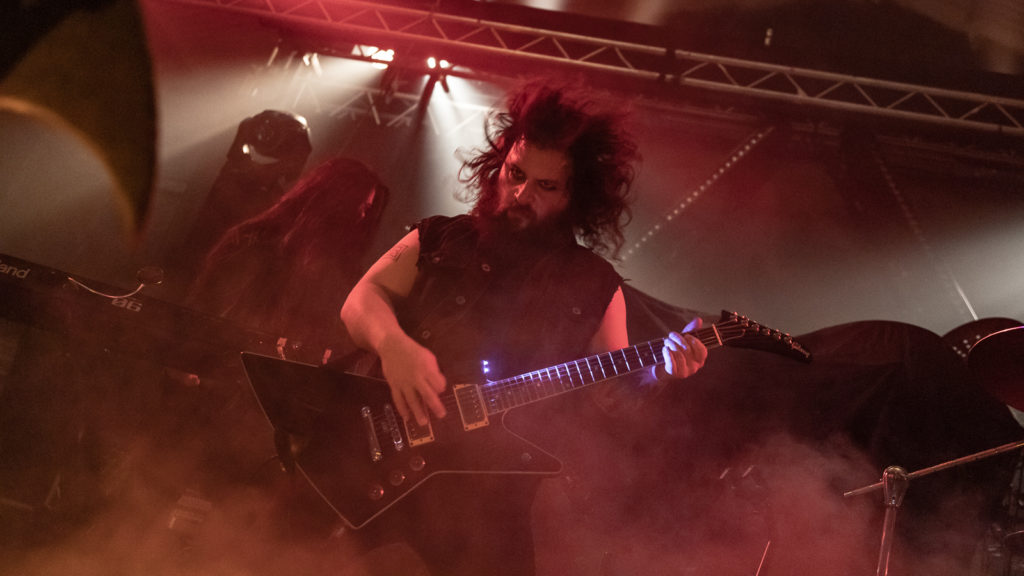 Openers Wolves in the Throne room are the most overtly black metal act on the bill, and yet they avoid most of the genre’s trappings – corpse paint, pseudonyms, references to Old Nick, etc. Musically, the Weaver siblings and their bandmates put a distinctively rustic, Pacific Northwest avant-metal spin on proceedings, their self-styled ‘Cascadian Black Metal’ being augmented with long ambient passages and the evocative sounds of crackling wood fire. 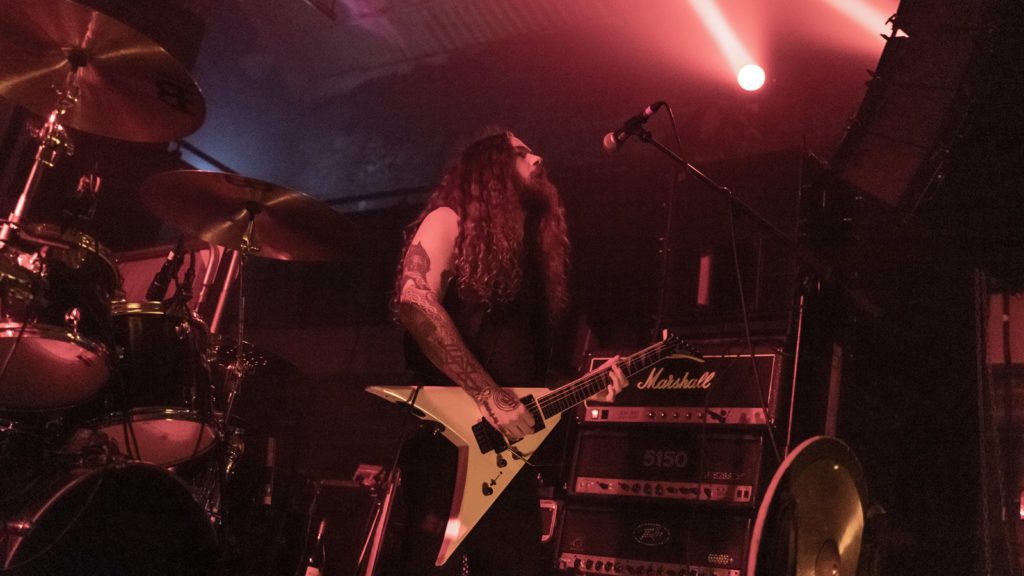 They’ve been known to spark up a conflagration of their own on stage, but presumably this is frowned upon at Motion. So they fill the room with the smell of burning incense instead, which makes a pleasant change from the musky metal aroma of Sweaty Bloke Armpit. 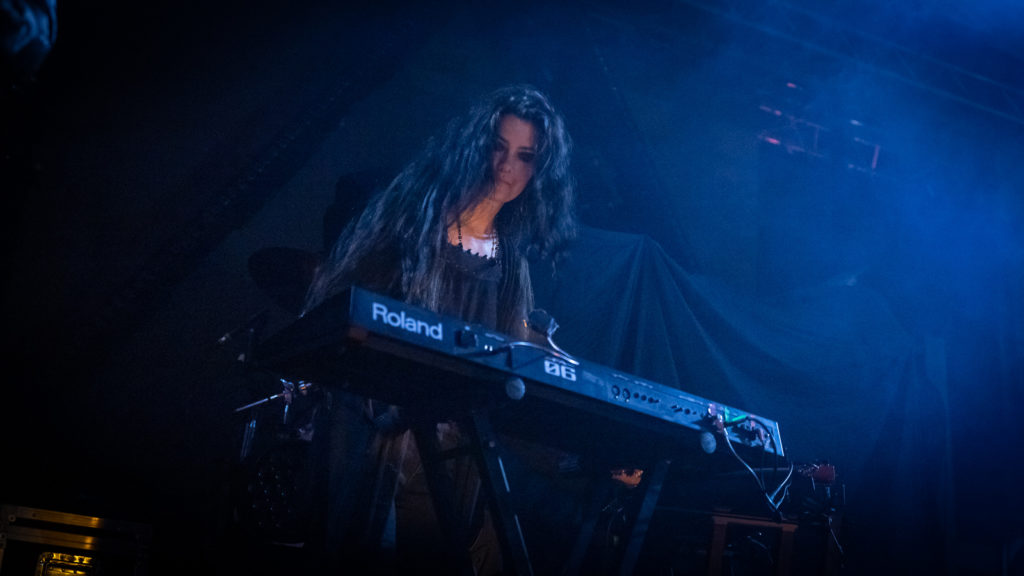 Wisely, they now include Pussygutt/Wolvserpent multi-instrumentalist Brittany McConnell as a touring member of the band, her keyboards being the dark beating heart of WITTR’s distinctive brand of atmospheric black metal. There’s little in the way of audience interaction here, though, apart from a solitary “Gragggh!” of appreciation for our enthusiasm from Nathan Weaver 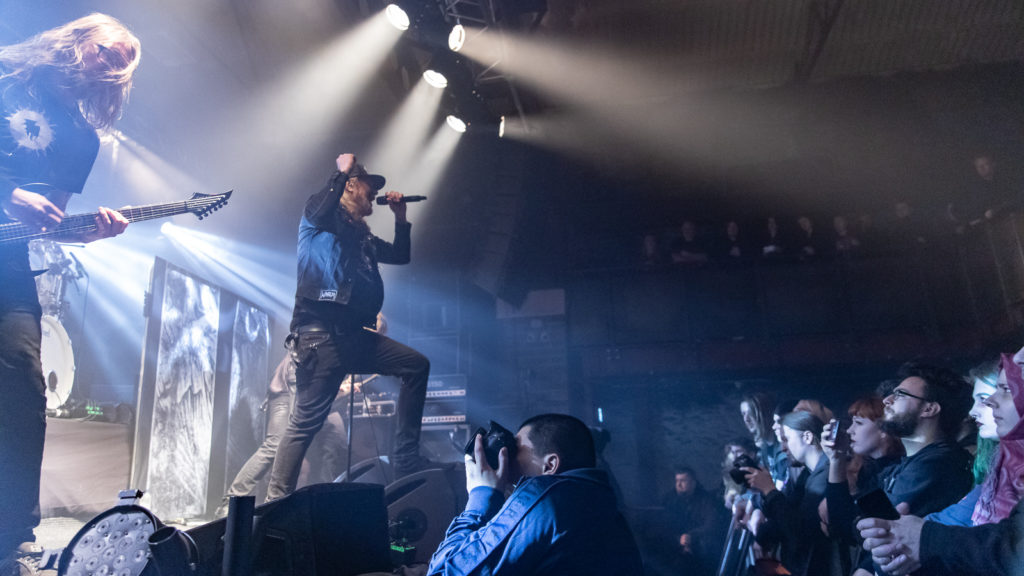 Gnarly Gothenburg veterans At the Gates have been ploughing their pioneering melodic death metal furrow for nearly 30 years now, with a couple of extended periods of time off for good behaviour. Indeed, beneath the surface of their much-imitated sound, it’s easy to detect the enduring influence of the thrash metal of an earlier era. 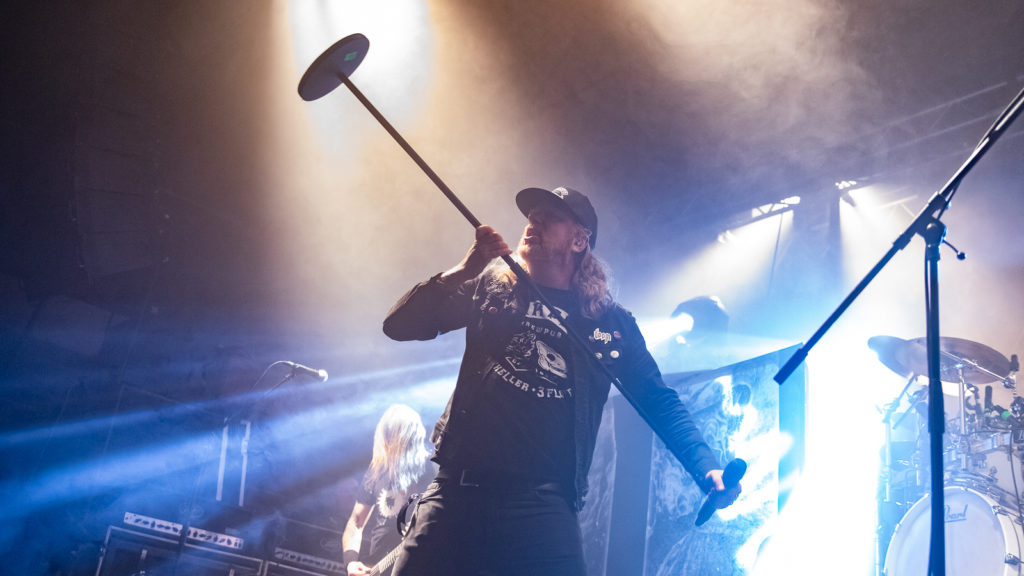 Given a fairly generous 50 minute support slot, they waste no time in impressing the hordes who’ve never seen them before with a super-tight performance that swiftly gets the mosh pit erupting. Perched atop a towering drum riser, former Paradise Lost drummer Adrian Erlandsson, who also had a ringside seat at the Cradle of Filth panto for several years, beats out a furious rhythm, while guitarists Jonas Stålhammar and Martin Larssonk and bassist Jonas Björler sport mile-wide grins at the emphatic crowd response. 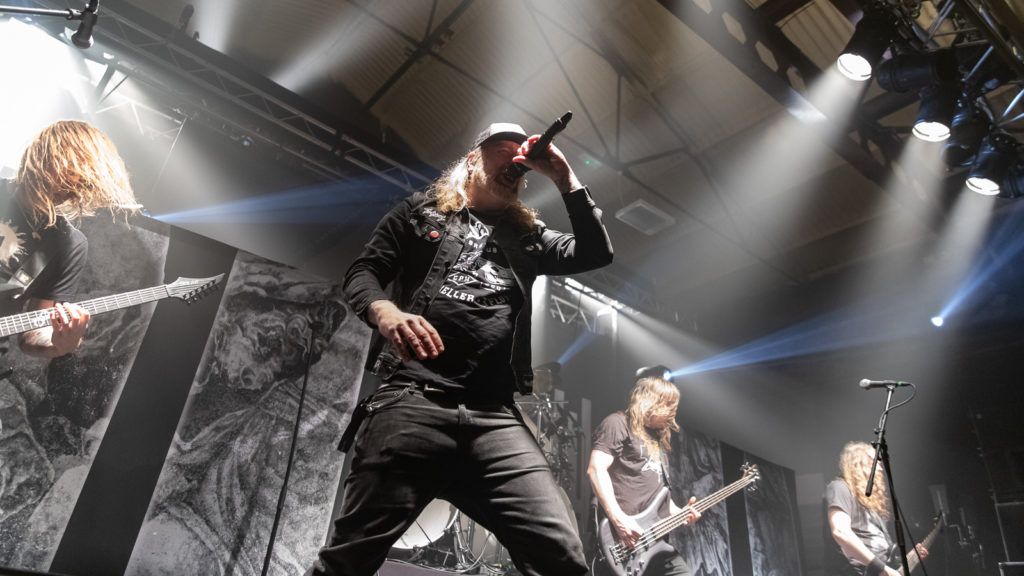 Frontman Tomas Lindberg, who favours a distinctive bark over the more familiar death metal growl, reminds us that their only previous show in Bristol was at the Full Moon pub on pre-hipster Stokes Croft back in 1996. (Anyone else remember metal nights at the scuzzy old Full Moon with the little stage next to the wooden staircase?) He fondly dedicates A Star Bound in Stone to the place, which rather suggests he hasn’t been back. 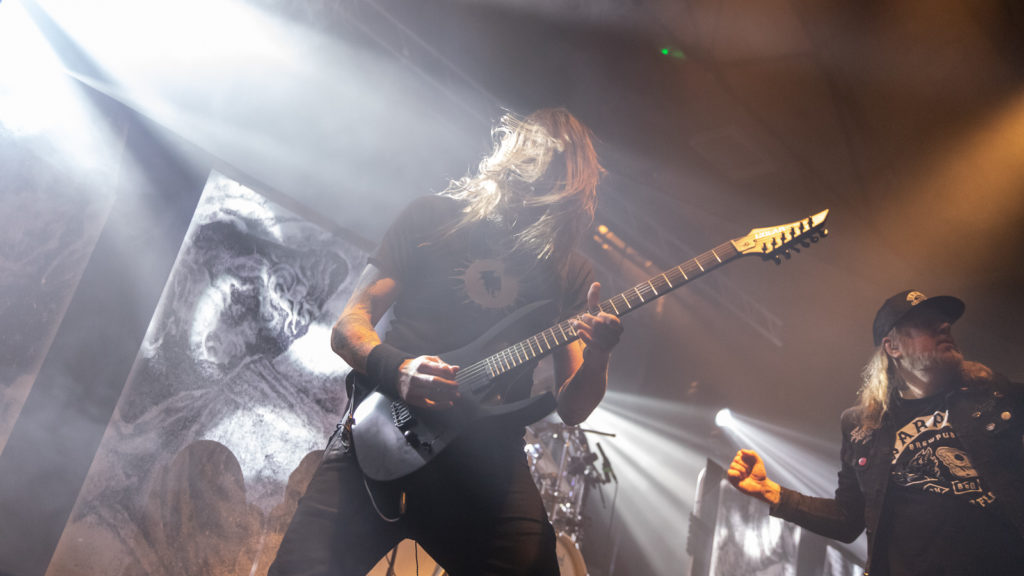 Much of At the Gates’ set is drawn from recent albums, notably At War with Reality from 2014, of which they’re justly proud. This also yields set closer The Night Eternal which resolves into a fabulous twin guitar wig-out, underlining the musical ability at play beneath their full-throttle assault. Don’t leave it another 23 years, chaps! 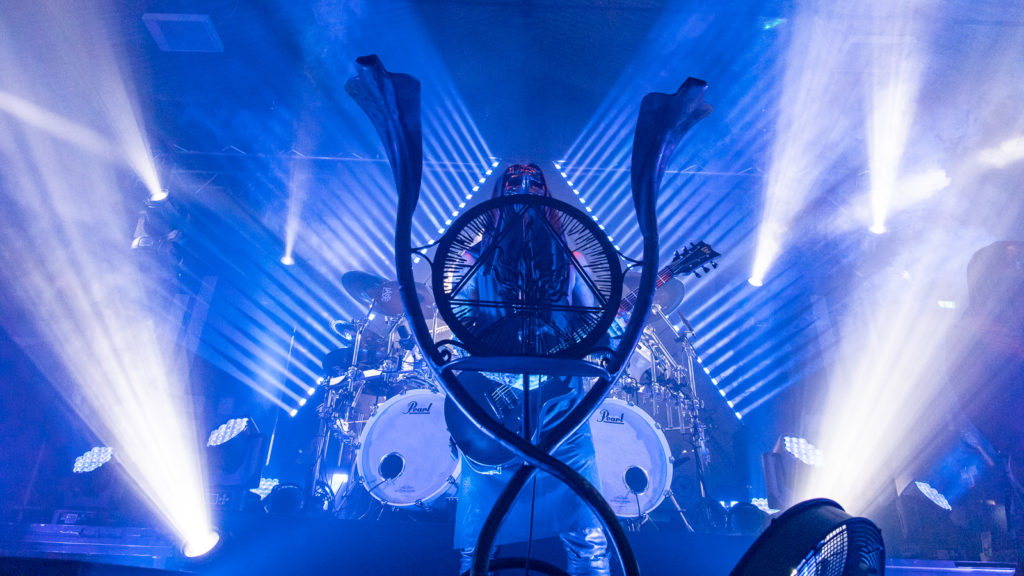 Having beaten the Catholic Church and Polish government in court and survived a near-fatal brush with leukaemia, Nergal (that’s Adam Darski to fans of his very different Nick Cave-style side-project Me and That Man), is clearly on a roll. Behemoth’s (death) star has now risen to the point where he can afford to stage the kind of production he could only dream about when they performed for a few hundred people rattling around the Bierkeller back in 2005. 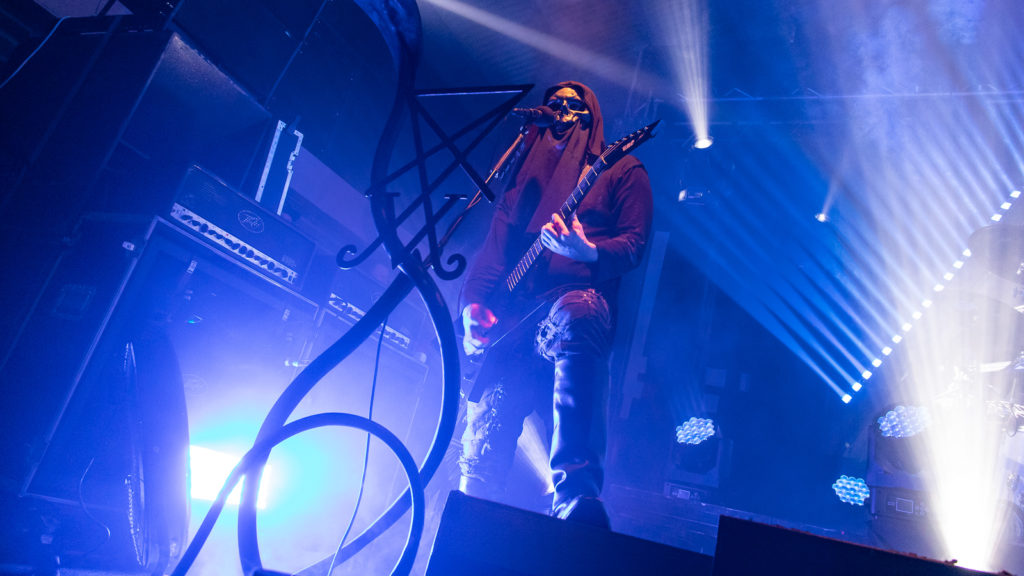 Music this extreme isn’t supposed to be quite so popular. But then they used to say that about Metallica and Slayer. Despite the competing attraction of Buckcherry playing across town at the Academy, albeit to a very different metal audience, Motion is heaving for the heaviest show here since Cannibal Corpse last March. For those with a penchant for evil underwear, the well-stocked merch stand even does a pair of Behemoth socks for a frankly diabolical £20. 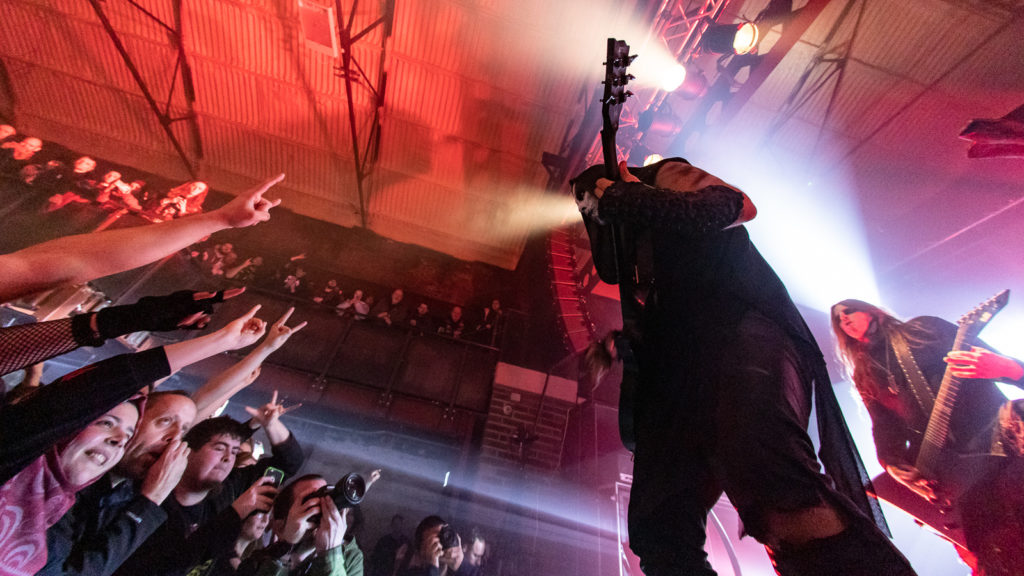 The creepy children’s chant “I shall not forgive, Jesus Christ” from I Loved You at Your Darkest album opener Solve gets louder and louder until the curtain drops and the masked men of Behemoth unleash their blasphemytastic fury in the form of Wolves Ov Siberia. Yep, we get the full show tonight with multiple costume changes (robes, masks, increasingly elaborate headgear), mock rituals, a huge triangular projection screen displaying sinister imagery, an array of powerful smoke cannons and those elaborate microphone stands. 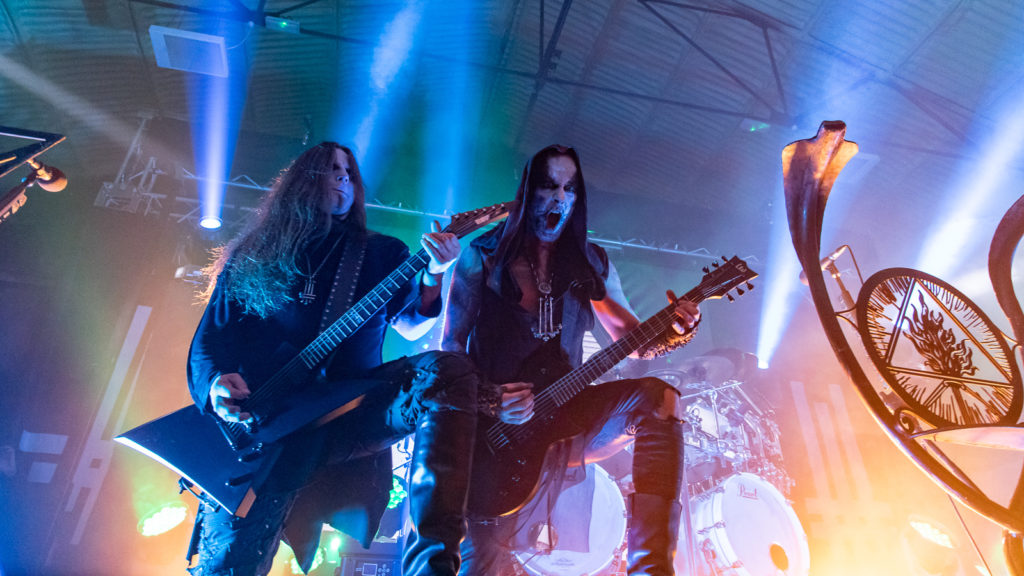 It’s probably a little glib to describe Behemoth as the extreme metal Ghost – especially as Nergal takes his Satanism very seriously indeed, while the Swedes serve up theirs with a pop twist and a sly smirk. The crunchy, concise Bartzabel – for which Nergal breaks out the big hat from the video – is the closest Behemoth get to this territory, with its almost catchy ritual “Come to me, Bartzabel” chant. But this sounds absolutely vast on stage, with the enormous riffs and Inferno’s explosive drums positively challenging the reviewer to resist a Hades-related metaphor. 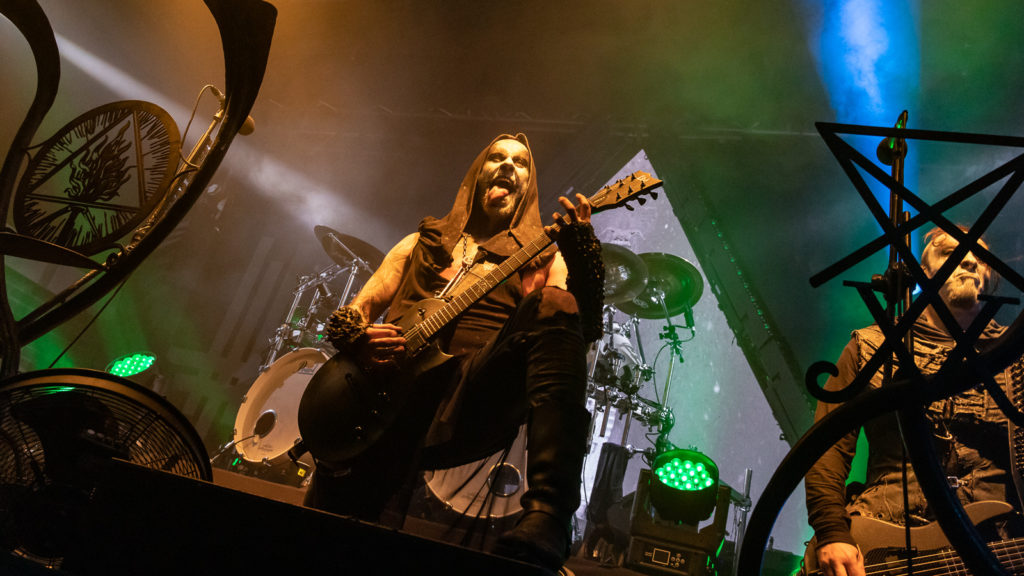 If there’s a slight disappointment here, it is that Behemoth opt for full-on musical brutality throughout, leaving little room for the dark ambient interludes and sharp dynamic shifts of their recorded work, such as In the Absence Ov Light. But, hey, they play Ov Fire and the Void, Ecclesia Diabolica Catholica and Blow Your Trumpets Gabriel, so who’s really complaining? 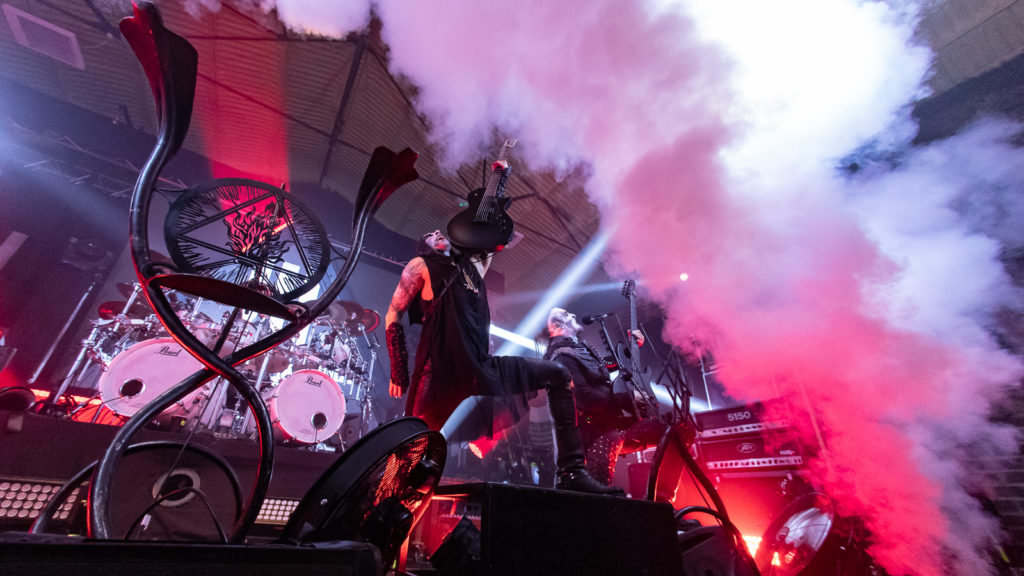 The show climaxes with Chant for Eschaton 2000. With a cheery “Hail Satan!” Nergal’s off, disappearing in a puff of smoke. Literally, as those smoke cannons seem to have gone berserk at this point. Alas, the whiff of sulphur could not be detected from this reviewer’s vantage point. 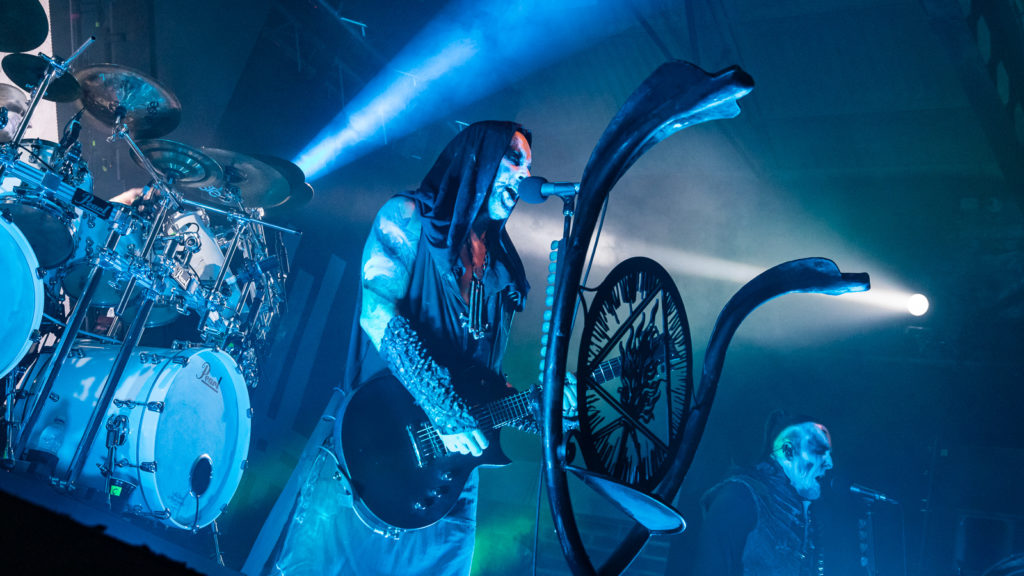 They can’t really leave it there, of course. The mother of all headgear gets an airing during Lucifer, and We Are the Next 1000 Years is robbed of its malevolence only a tad by that least devilish of stage props – the confetti cannon. To wrap things up, the robed quartet stand at the front of the stage beating out that drum pattern of the instrumental Coagvia, like the world’s most demonic World Music combo. We depart with our ears ringing, safe in the knowledge that Beelzebub’s tunesmith superiority remains unchallenged.