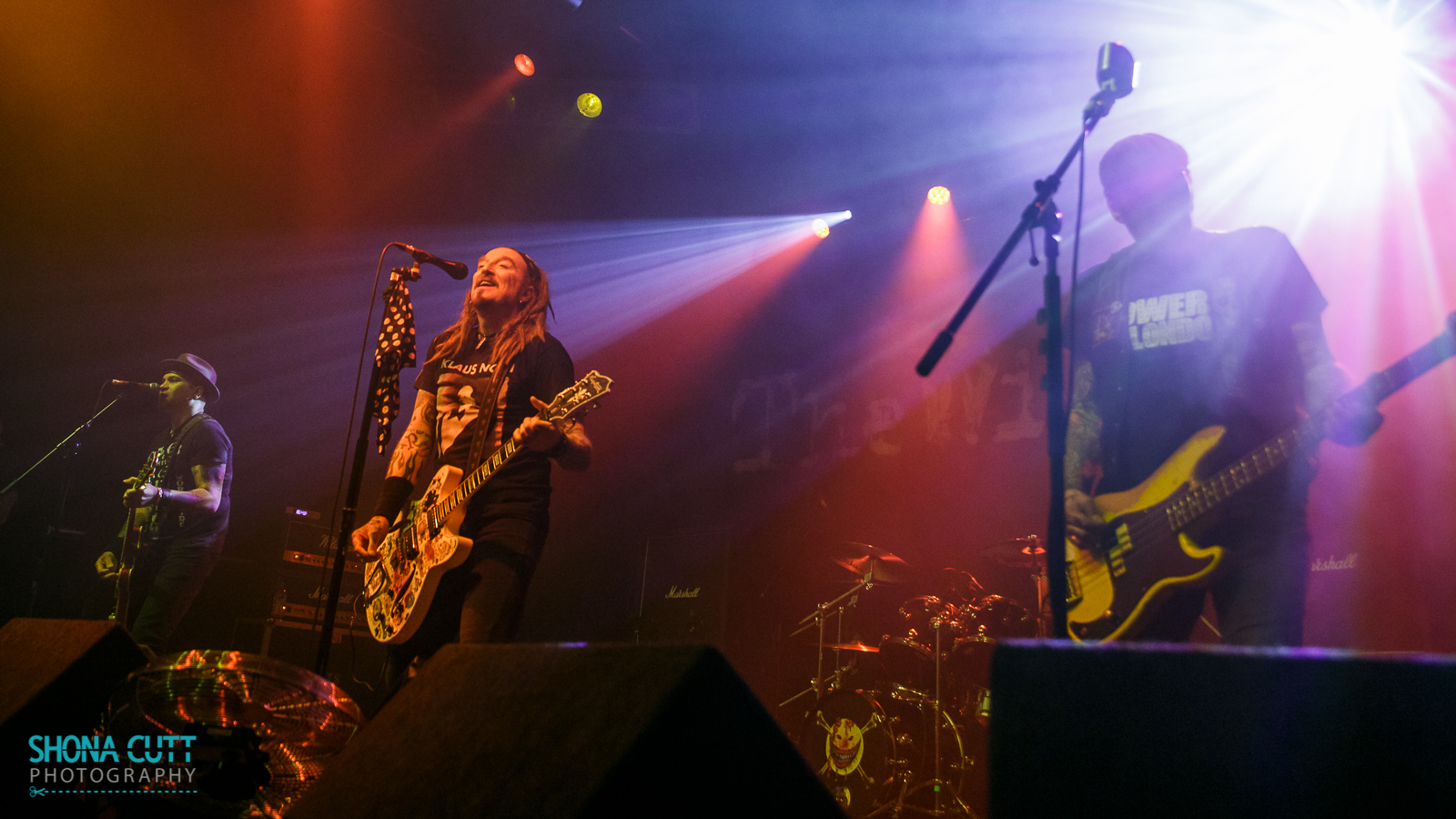 It’s a safe bet that back in their brief moment of confected tabloid outrage/Celebrity Big Brother infamy more than a decade ago, the Towers of London never envisaged that they’d wind up playing to a half-full SWX at the bottom of a three-band bill. 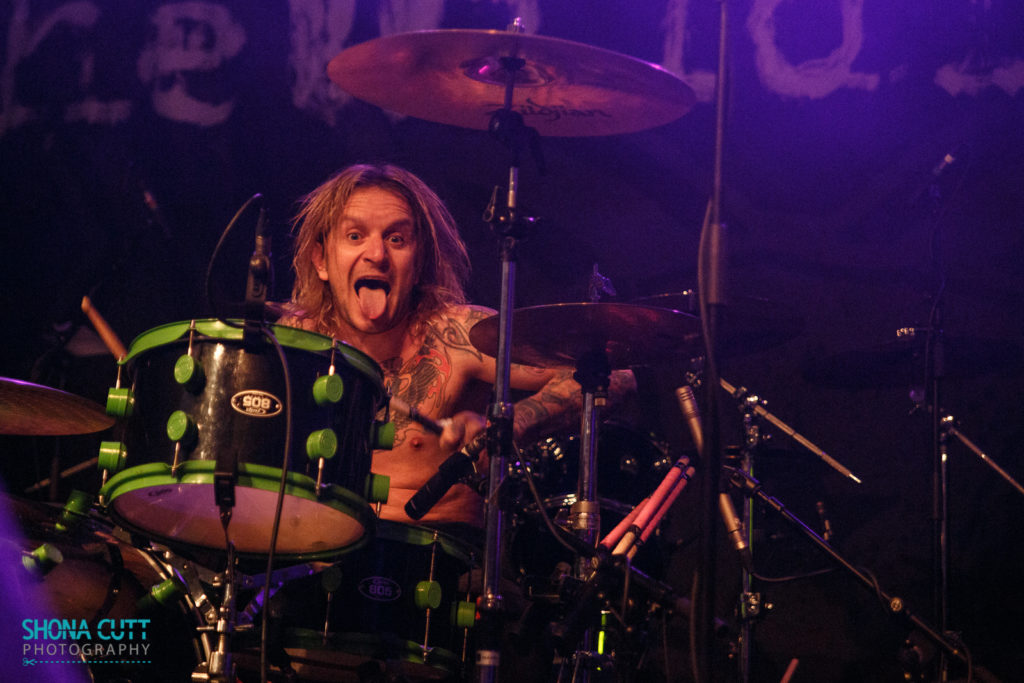 They’ve got the posturing, they’ve got the shades and they’ve even got a drummer who seems rather too good to be playing this stuff. What they still haven’t got are any memorable songs – in stark contrast to tonight’s headliners, whose superabundance of them is almost embarrassing by comparison. Perhaps Ginger could chuck a couple of his cast-offs their way in magnanimous Bowie/Mott style. 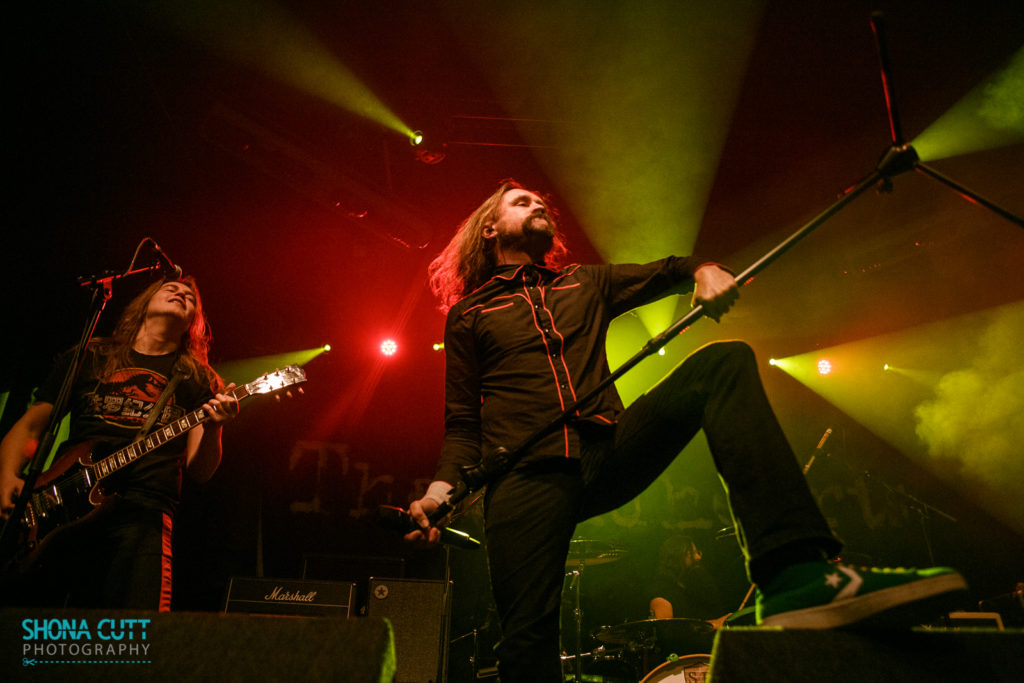 Life holds many mysteries. Where is all the dark matter in the universe? What happens when we die? And why have there been so few bands openly influenced by Status Quo? Everyone and his dog claims to worship Sabbath. But as anyone who remembers the 1970s will tell you, Quo were absolutely huge in this country for a decade or so. Often, the only reason to watch Top of the Pops (remember that?) was because they had a new single in the chart. It always sounded much the same as the previous one (until they went crap), but we loved it just the same. 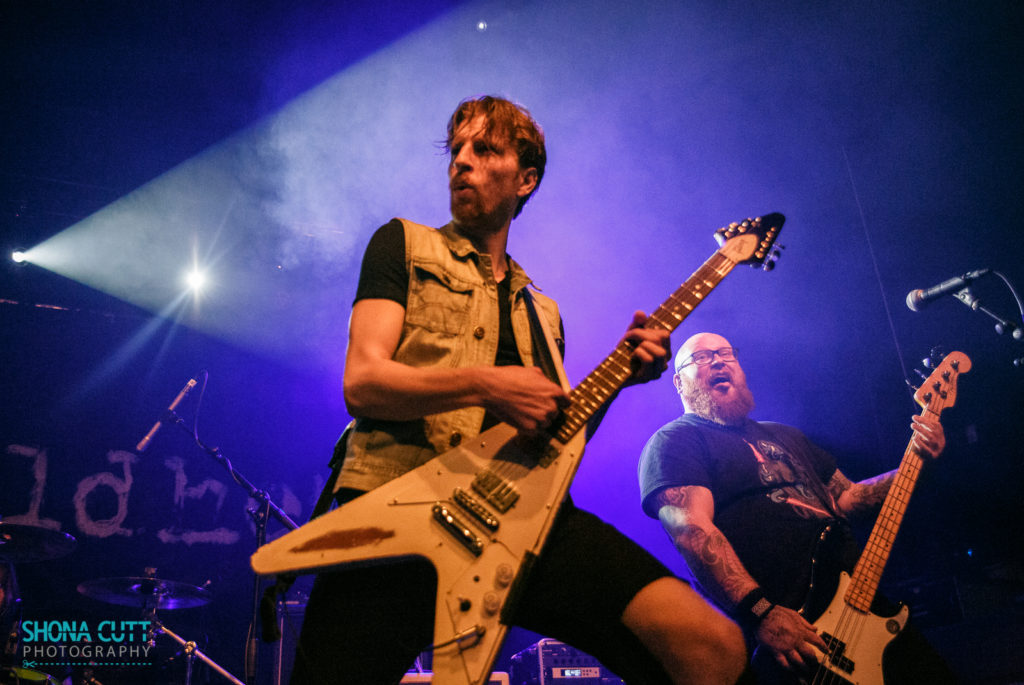 But wait – here’s Lancaster’s unexpectedly chart-busting Massive Wagons with their driving, heads-down Rick Parfitt tribute, Back to the Stack, replete with more double-denim Quo references than you could shake a lank mop of unwashed hair at. It’s a glorious, wholly unapologetic celebration that swiftly gets the swelling audience onside. 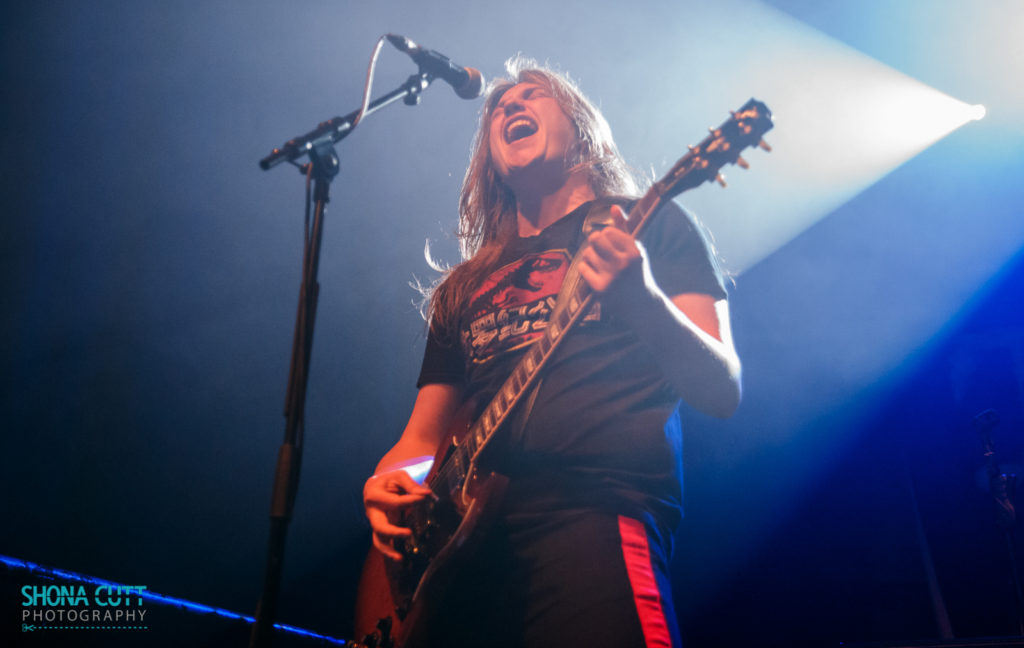 Quo are just one of the influences at work in the Wagons’ old-school yet refreshingly underivative repertoire, which benefits from some quirky and imaginative songwriting. The Ballad of Verdun Hayes, for example, is both an attack on rampant, fun-sapping elf’n’safety/compensation culture and an ode to the world’s oldest skydiver – though as Noddy Holder-channelling, foghorn-voiced frontman Baz Mills acknowledges, the fact that Verdun recently turned 103 has rather ruined his rhyme.

It’s always a pleasure to watch a rock band who know their fortunes are on the up and the mile-wide grins on the faces of Massive Wagons as they tear through their set is a joy to behold. 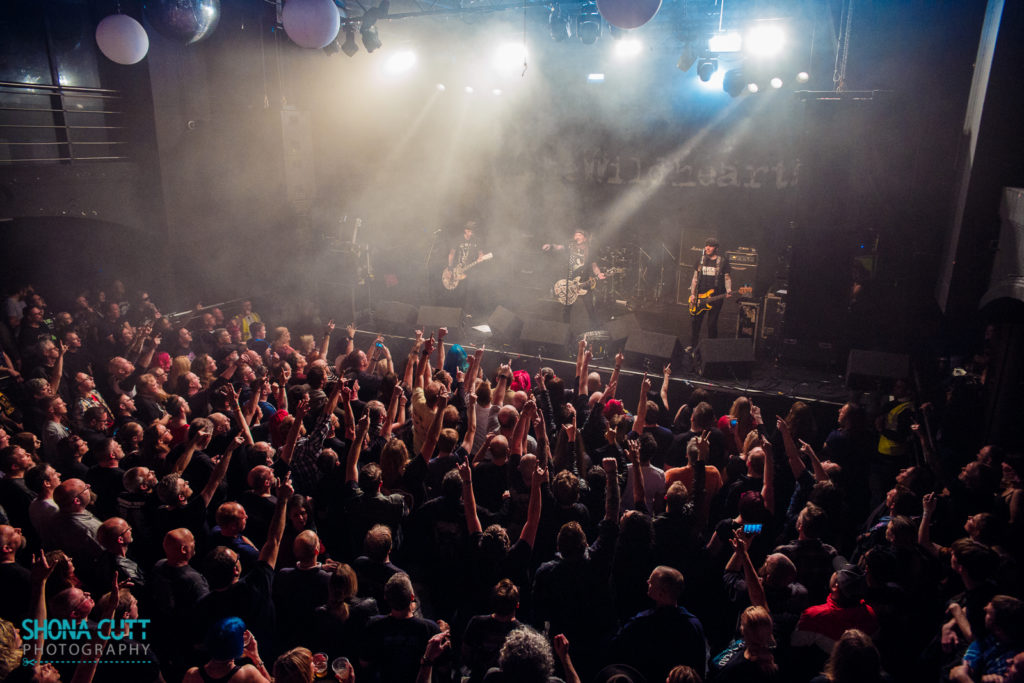 What kind of Wildhearts show we get depends on Ginger’s state of mind. He’s always been open about his mental health difficulties and was sectioned again last November. Ominously, the previous album recorded by this ‘classic’ Wildhearts line-up, with the now unipedal Danny on bass, was 1997’s unlistenable Endless, Nameless – the cautionary sound of a band on the wrong drugs – after which they disintegrated. 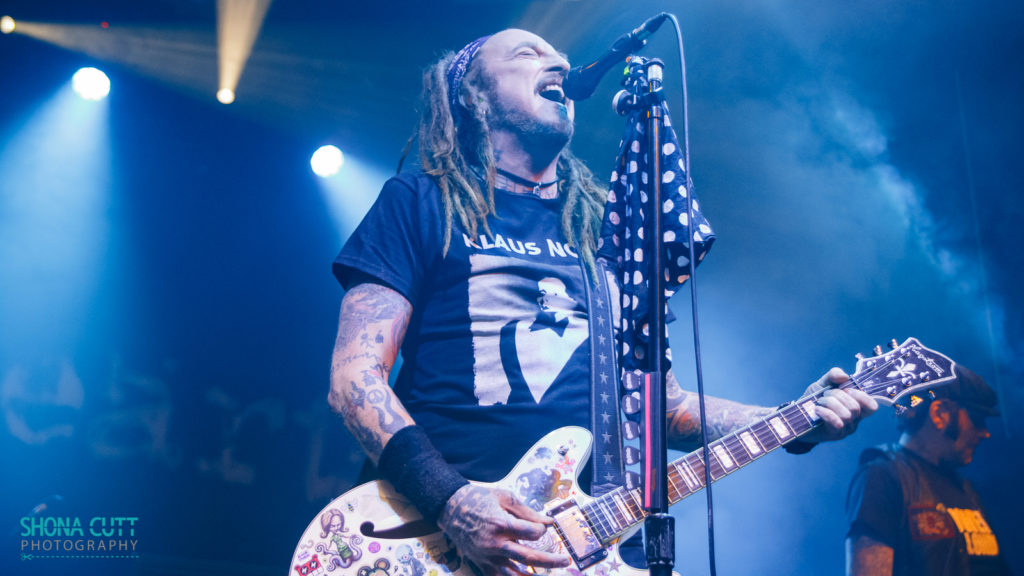 More than two decades on, they’ve released an album that stands proudly alongside their best work, the aptly titled Renaissance Men, and Ginger has just received news that it’s sitting at number five in the mid-week album chart – the Wildhearts’ highest-ever chart placing. All of which contributes to his positively ebullient mood, buoyed by a typically boisterous Bristol crowd. 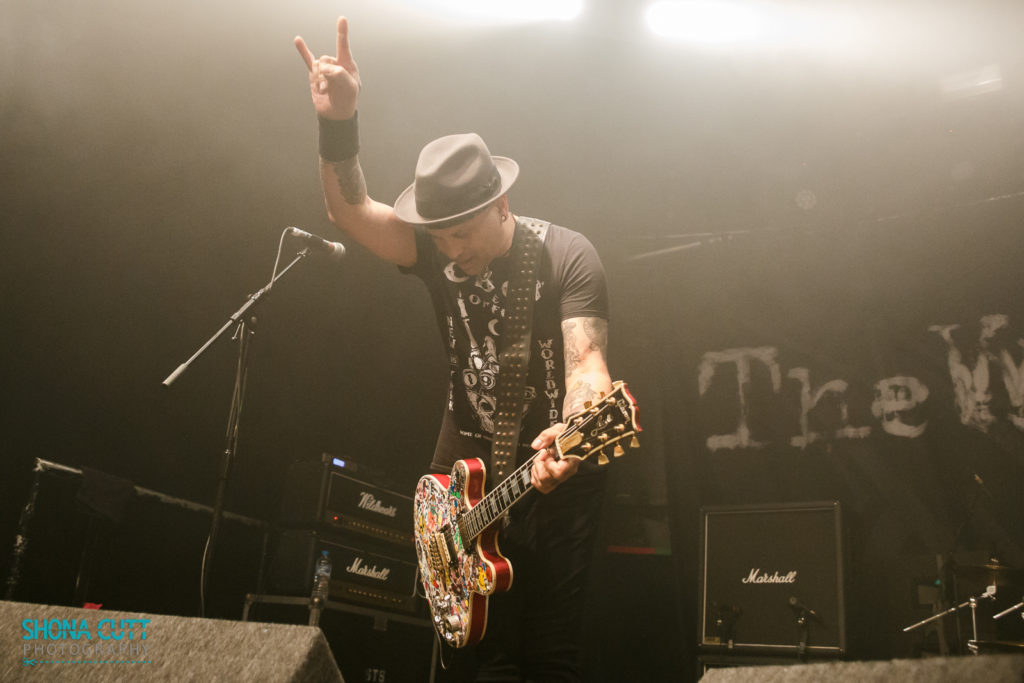 Given the love they’ve been getting for the new album, it’s perhaps a little surprising that they don’t play all of it – as they did, if memory serves, with Chutzpah back in 2009. Instead, they perform just four songs (actually three – more of which later) from Renaissance Men in what is very much a crowd-pleasing set. That’s not to suggest they’re playing it safe. Fact is that almost any set played by The Wildhearts could be characterised as crowd-pleasing, so high is the quality bar set. This is a band whose B-sides are better than most of their peers’ A-sides, after all. 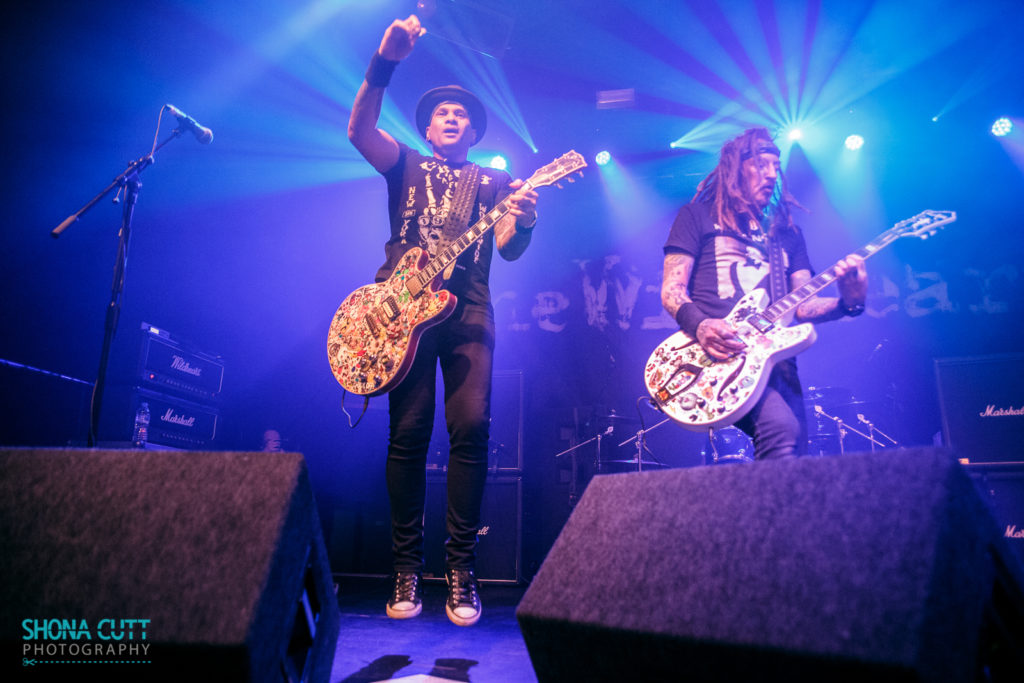 Dispatching the full metal riffage of Everlone, singalong heavy pop-punk of Vanilla Radio and breakneck assault of Suckerpunch in short order, this self-styled ‘seven-legged rock’n’roll machine’ have never sounded better, nailing all of those big seductive harmonies in an epic 20-song set. Of the new material, Let ‘Em Go (“about getting rid of the wankers in your life,” explains Ginger, a tad unnecessarily) stands out as an instant Wildhearts classic, which will be hard to dislodge from any future set list.

Danny certainly displays the ravages of those hard-livin’ years, but seems to be thoroughly enjoying himself on stage again and no longer needs to avail himself of a stool as he did at Motion last year. “He hasn’t stood for so long since 1991,” quips Ginger. Sporting his usual pork pie hat, long-term foil and occasional hot sauce vendor CJ is on suitably fiery form throughout. At the back, Ritch Battersby cements his position as one of the most aptly named drummers in rock (next to Chad Wackerman, obviously). 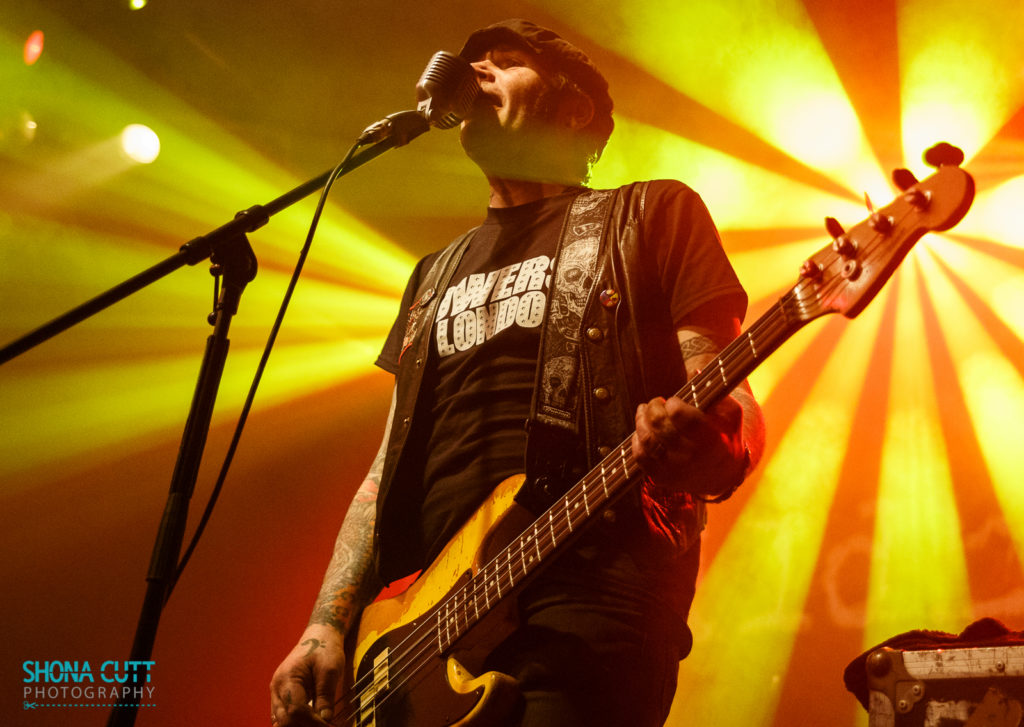 Urge remains something of an acquired taste, but The Jackson Whites makes a welcome return to the set and the euphoric chorus of Top of the World reflects what seems to be the mood in the Wildhearts camp right now. Set closer Love U Til I Don’t (with obligatory snippet of the Fabs’ Day Tripper) still sounds like a glorious cut’n’shut of every great sixties pop song forced through a punk/metal filter and leads to the audience calling them back with that “Don’t worry ’bout me…” chant

“We’re going to do something a little odd,” announces Ginger when they return for the extended encore. He’s not kidding. The Wildhearts proceed to mime to a playback of their latest single, the title track from Renaissance Men, for the cameras while we all feign wild enthusiasm in the hope of getting into the video.

Things get back on track with five more songs, including the wonderfully evocative You Took the Sunshine from New York, and concluding with the delirious double whammy of My Baby is a Headfuck and I Wanna Go Where the People Go. Who’d have predicted The Wildhearts would be on such magnificent form this far into an eventful career that’s been packed with more twists than the most outlandish soap opera?