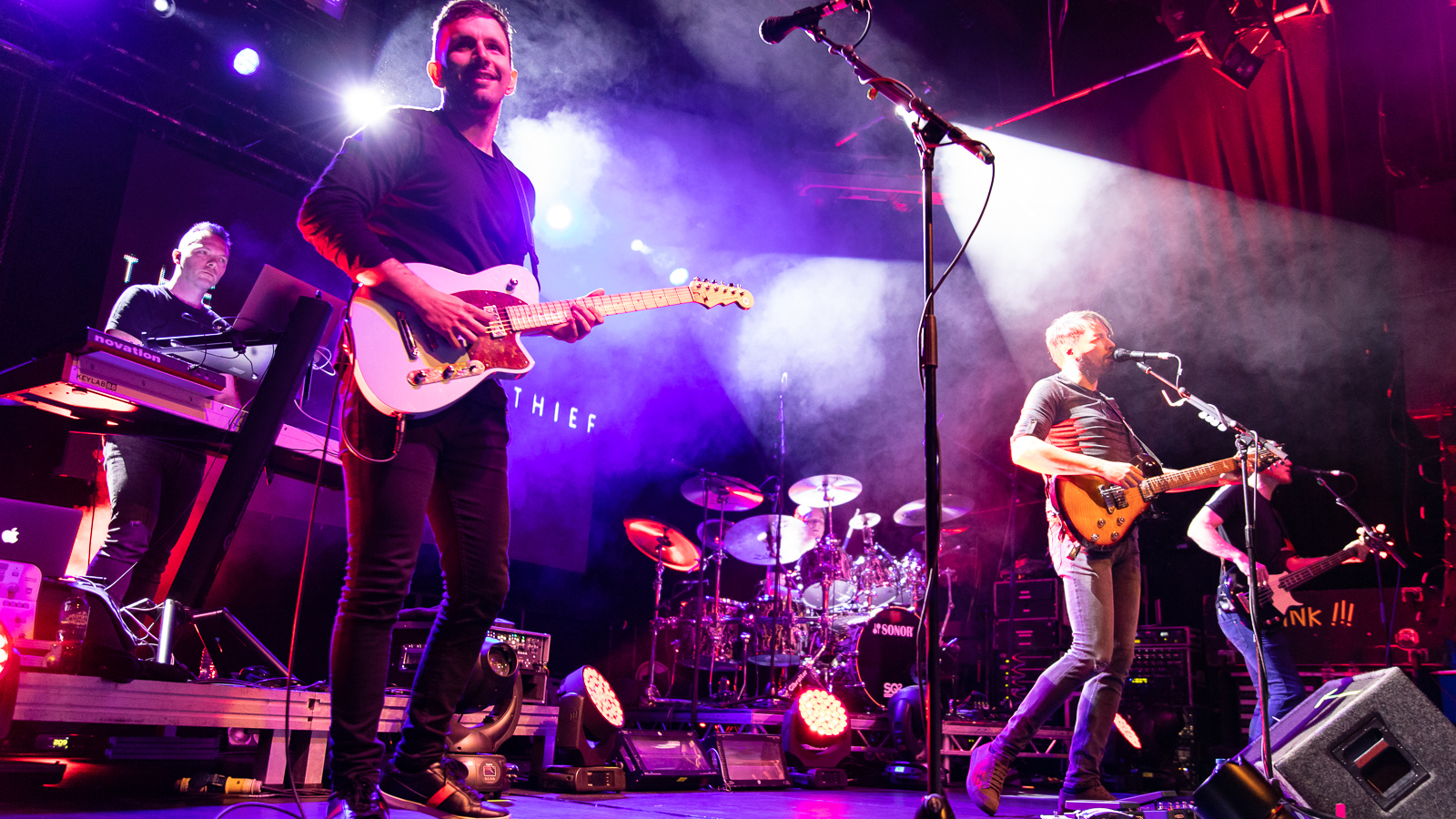 One thing’s for sure: we can look forward to a great drum sound tonight. With two of King Crimson’s three (count ’em!) drummers on stage – albeit not together – this is going to be a tub-thumper’s wet dream. Fortunately, these talented fellas are both team players so there will be no patience-sapping solos, as Pineapple Thief frontman Bruce Soord smirkingly assures us. 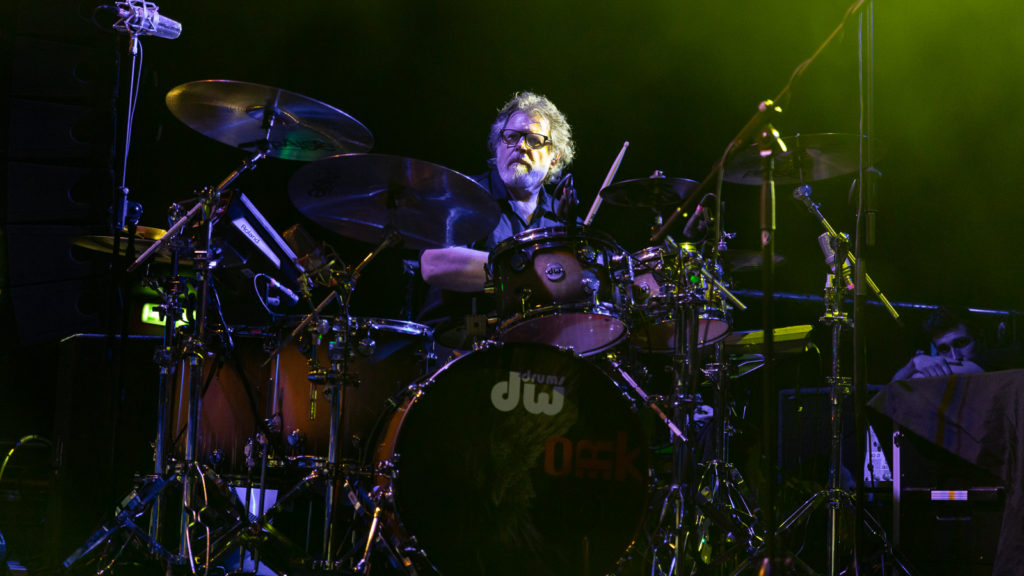 First up are Anglo-Italian-American quartet (and imagine how tricky those rehearsals must be to organise) O.R.k. Why the silly name? “There’s already a French band named Ork,” reveals Californian drummer Pat Mastelotto, who shares stage announcements with former Porcupine Tree bassist Colin Edwin. Theirs are the names we all recognise, but we’re about to be bowled over by the Italian members of O.R.k. 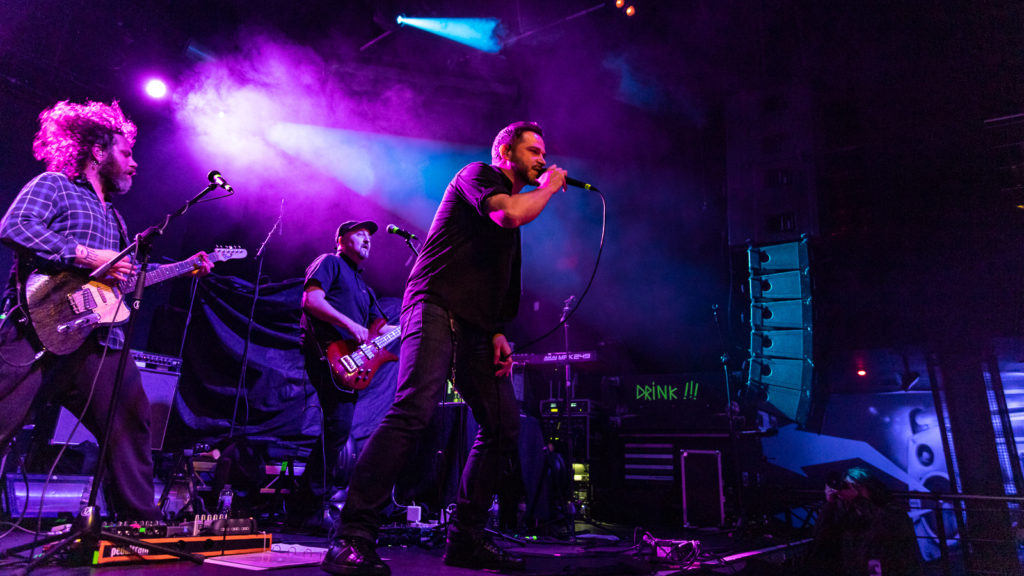 Musically, they hit the sweet spot between the kind of ferocious complexity that excites math rock enthusiasts and old-school heavy guitar riffage, with an overarching melodicism that keeps the spectre of self-indulgence at bay. Award-winning film soundtrack composer Lorenzo Esposito Fornasari (abbreviated, understandably, to LEF) not only deploys huge washes of Mellotron (or modern emulator equivalent), inviting comparions with fellow film-scoring countrymen Goblin, but also has an enormously powerful and versatile voice, veering effortlessly from sinister growl to soaring wail. 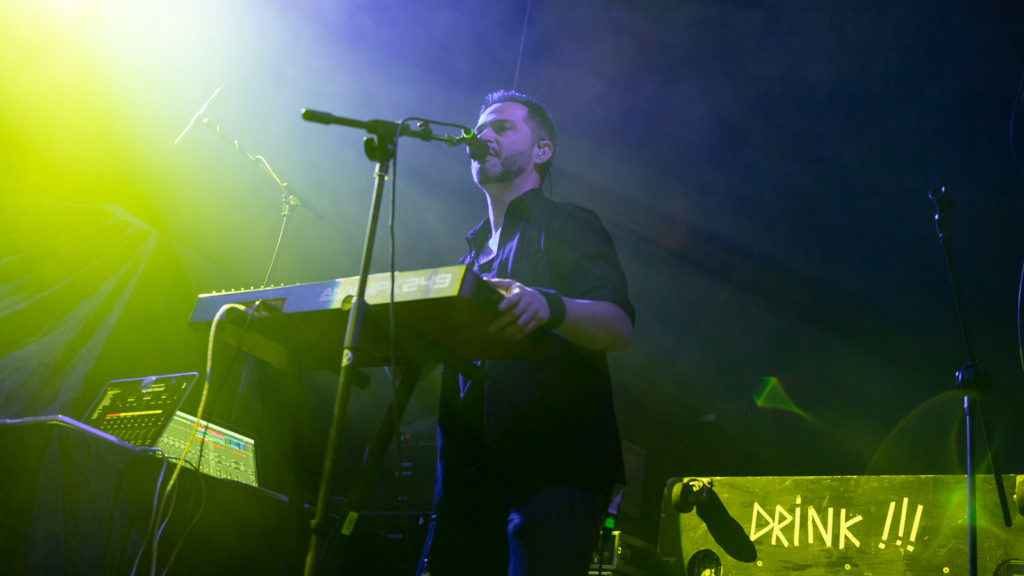 A distinctive and imaginative player, Mastelotto occupies the opposite side of the stage with his impressive kit. During Time Corroded, there are moments when he even forsakes the drums altogether to concentrate on battering his array of cymbals. 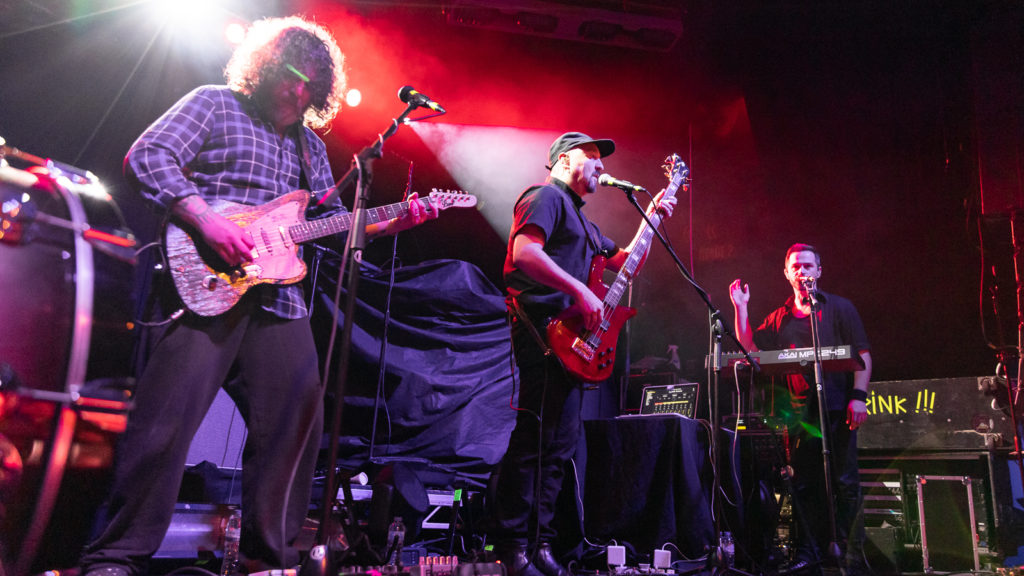 The trouble with having big-name guests on your albums is that you’re unlikely to be able to take them on tour. So with Serj Tankian presumably otherwise engaged, it falls to guitarist Carmelo Pipitone to take his vocals on Black Blooms, the lead track from O.R.k.’s third album Ramagehead. And an impressive job he does of it too, harmonising exquistiely with LEF. By this time they get to set closer Pyre, they’re really having fun, with Mastelotto slipping in a cheeky KC quote (In the Court of the Crimson King?) while LEF gives it the full Great Gig in the Sky. 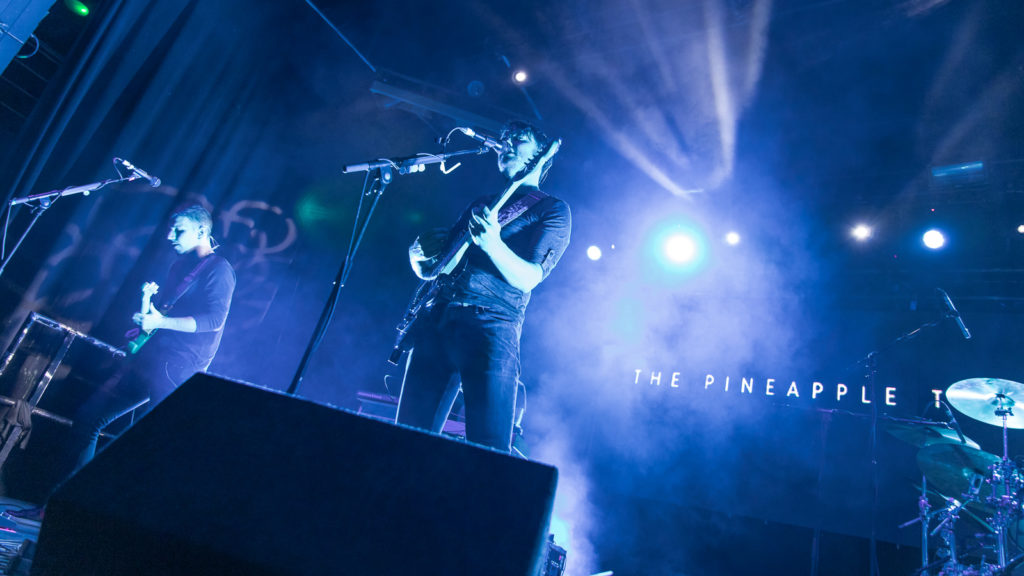 Each time The Pineapple Thief have played the Fleece, this reviewer has been left wondering why such a world-class band hasn’t pulled a much bigger audience. Now, finally, they seem to be reaching a critical mass through word of mouth with their biggest almost-hometown (there’s nowhere to play in Yeovil) gig to date to round off a lengthy tour in support of their outstanding Dissolution album. 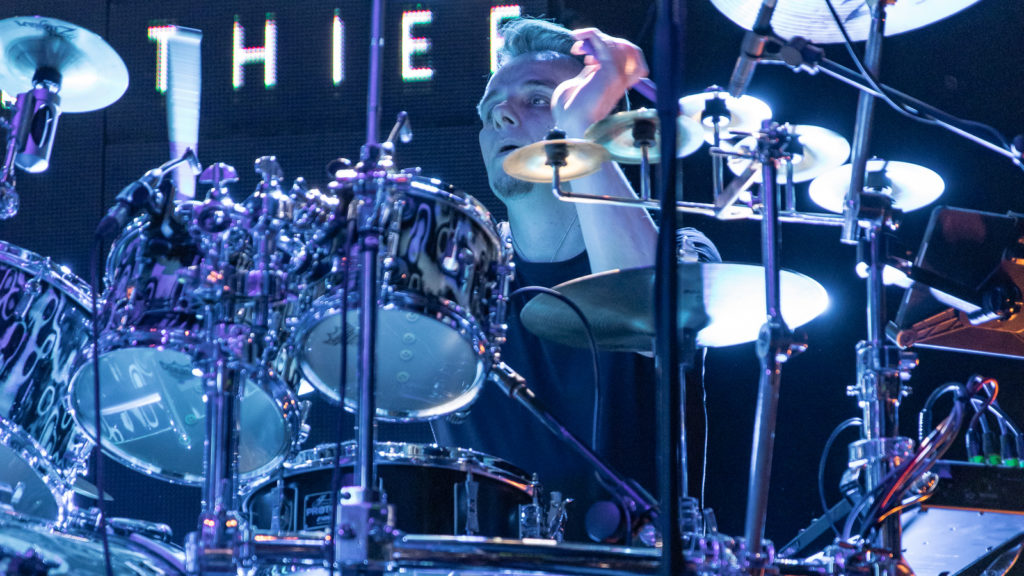 At first, persistent equipment malfunctions threaten to take the shine off this momentous occasion, but founder Bruce Soord shakes them off with good humour. He’s steered the Pineapples through rockier paths than this, after all. And they’re on absolute peak form in this, their second show in Bristol with Gavin Harrison on drums, assisted by a superlative sound mix. (Full marks, incidentally, to SWX for installing such an excellent PA, assuaging the fears of those of us who were initially a tad apprehensive about attending gigs in the former Romeo and Juliet’s/Papillons/Odyssey, etc., disco venue, which catered to generations of booty-shakers. Now if only they could find a way to serve some real beer at the bar for thirsty rockers . . .) 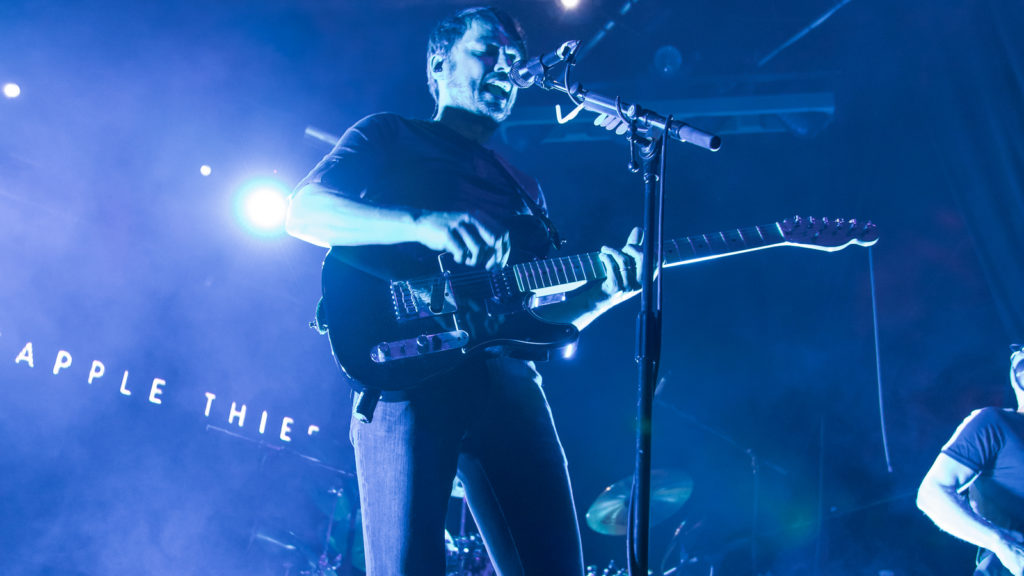 The uninitiated might be surprised to find The Pineapple Thief tagged as a prog band if they were exposed only to the band’s deceptively simple intimate relationship songs, borne aloft by Soord’s achingly melancholic vocals, often in harmony with those of bassist Jon Sykes (headphones still apparently welded to his head). Indeed, the likes of Threatening War and No Man’s Land not only serve as evidence of the band’s versatility but also function as effective gateway drugs to lengthier compositions. And there are plenty of those in the latter part of tonight’s set, including a stunning 3,000 Days, perennial crowd-pleaser Part Zero from 2003’s Variations on a Dream, and White Mist – the longest song on Dissolution. 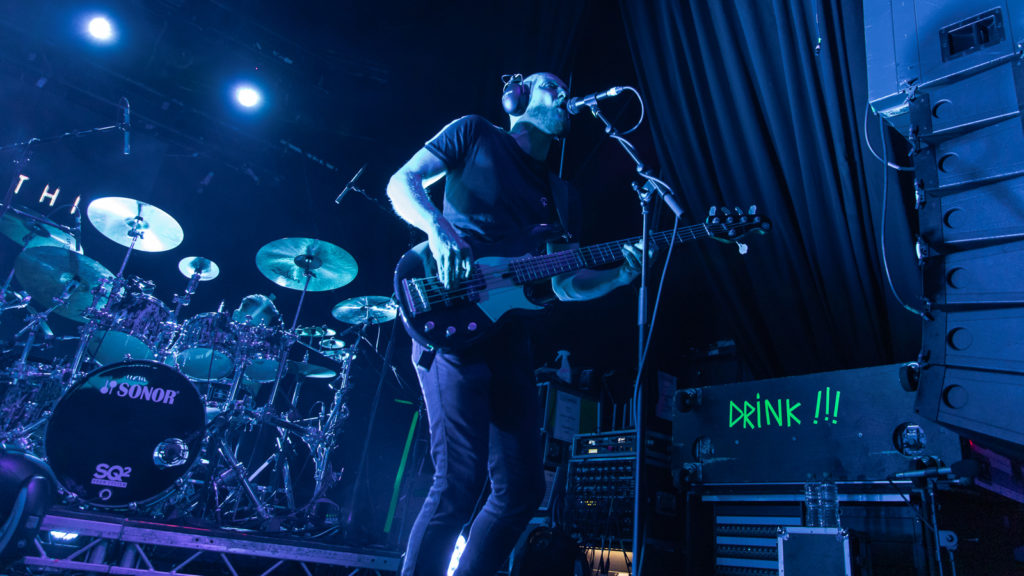 Unsurprisingly, they play all but two tracks from the new album, with Harrison very much making his presence felt (he gets a co-writing credit on most of them) while resisting any temptation to showboat. Tucked away at the back of the stage as usual, Steve Kitch – whom Bruce reveals has now fled bucolic Somerset for the bright lights of, erm, Exeter – remains one of the least flashy keyboard players in prog, but makes every contribution count. Newest recruit George Marios, who fills the touring guitarist role previously occupied by Darran Charles, proves more than equal to the challenges to TPT’s more demanding material. 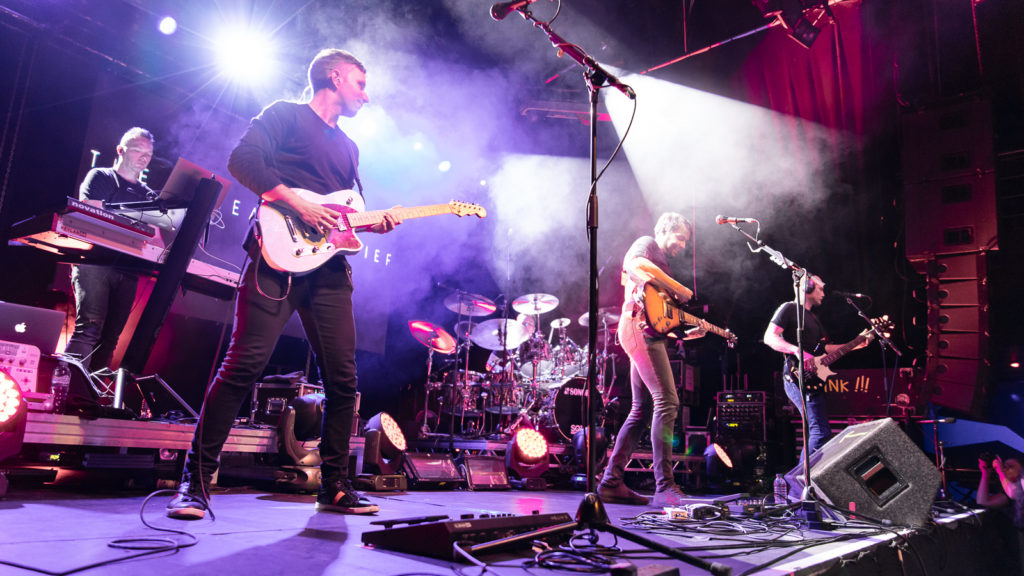 The encore begins in a very dark place with brooding, atypically brief Dissolution opener Not Naming Any Names, which gives way to the haunting The Final Thing on My Mind and climaxes with Snowdrops. Only a prog act would encourage their audience to clap along to a complex time signature, but most of us have had enough practice to get it right by now. This being the last night of the tour, Bruce gets presented with a bottle of champagne. This also being a glitch-prone night, he struggles to open it. Eventually, after much joshing, the recalcitrant cork is triumphantly popped and flies into the cheering crowd. It’s like a metaphor for the entire evening.