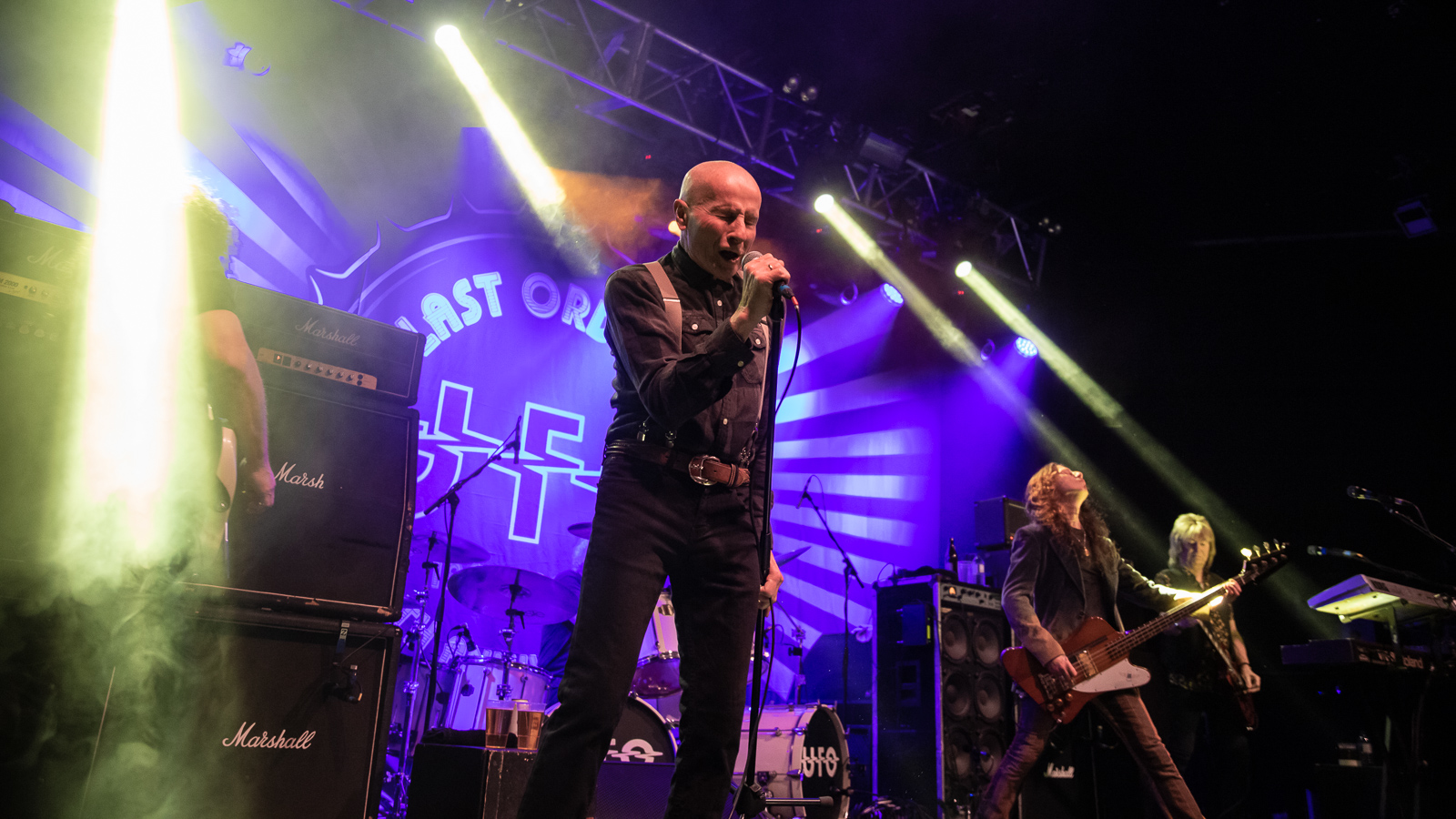 As Gene Simmons will tell you – probably for a large consultancy fee – nothing gets bums on seats quite as effectively as a farewell tour. Indeed, Kiss and certain other veteran bands (yes, ze Scorpions, we’re looking at you) seem to have been on never-ending farewell tours for as long as anybody can remember, giving new meaning to the term ‘long goodbye’. By combining their 50th anniversary with a ‘Last Orders’ tour, UFO succeed in packing the Academy to the rafters – even though it’s not exactly clear what ‘farewell’ means in this context. Frontman Phil Mogg has said he’s definitely retiring after this extended jaunt, which has proven so popular that dates continue to be added. But the door seems to be open for the rest of the band to carry on without him. 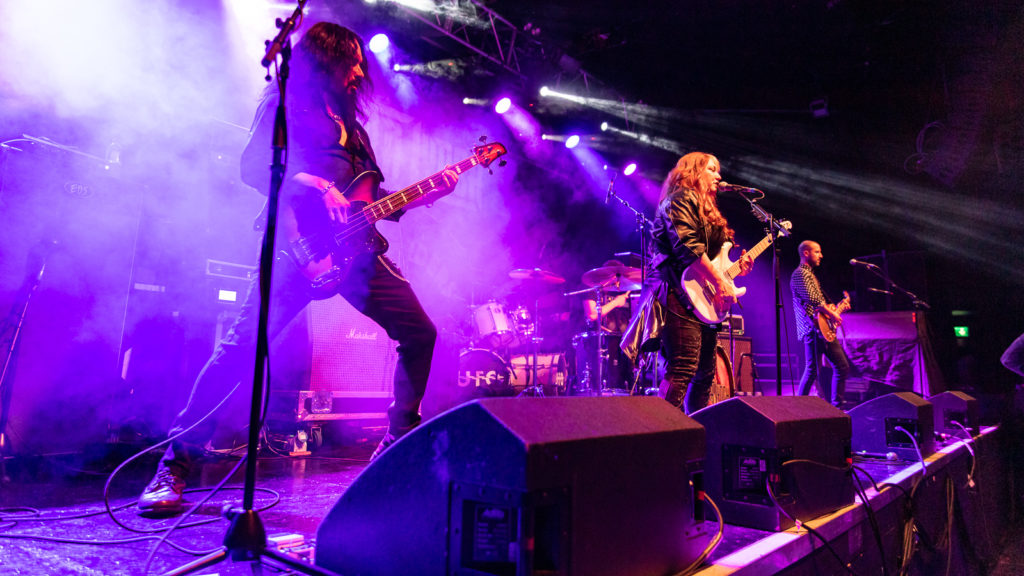 First up is LA’s Tara Lynch (or Gui-Tara as her website punningly insists), who’s new to, well, just about everybody. She can certainly play – mostly in an old-school classic rock style, rather than frantic shredding – and sing a bit. But her material is pretty mediocre and forgettable, with lengthy solos in place of songs. 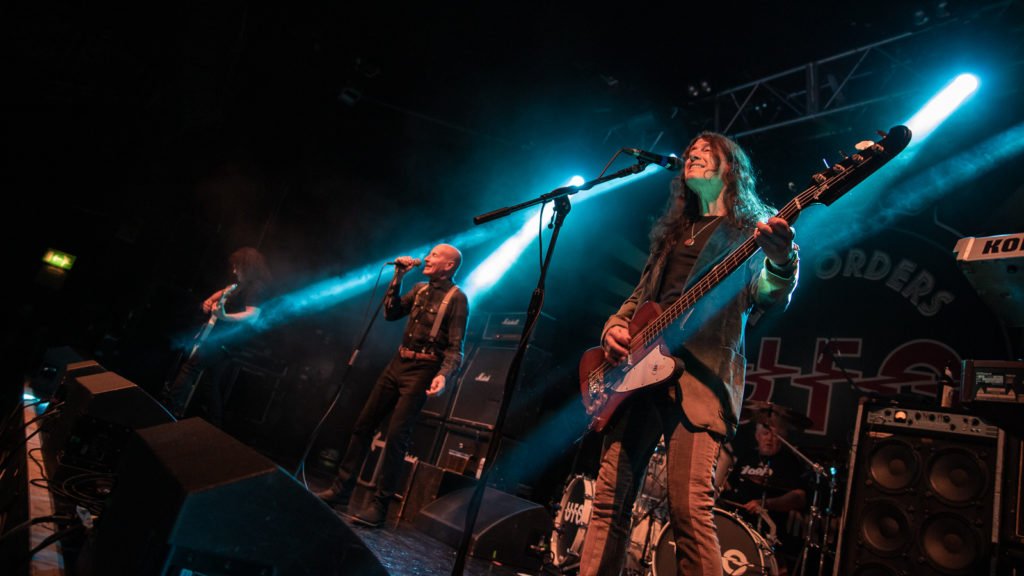 To the substantial numbers of spotty youths for whom 1977 meant Thin Lizzy, UFO and Judas Priest rather than The Clash or the Sex Pistols, Mogg’s mob were always one of our most undervalued bands, despite their enduring influence and commercial success. The late ’80s and ’90s were not exactly kind to them, often for self-inflicted reasons. (Who could forget the ‘clean and sober’ tour that kicked off at the Bristol Bierkeller with Mogg forgetting the words to the first song, while a prematurely refreshed Pete Way went arse-over-tit?) But for the last 15 years or so, coinciding with the arrival of guitarist Vinnie Moore, UFO have painstakingly recovered their reputation with a string of excellent albums. 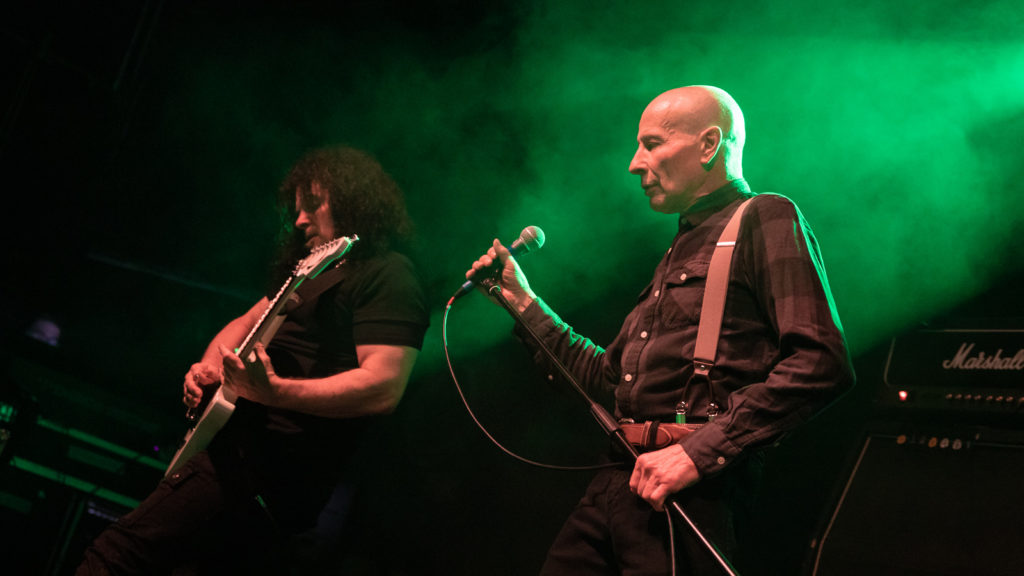 If there’s been a criticism of recent tours, it is that they continue to lean rather lazily on the crowd-pleasing Strangers in the Night set, chucking in a few new songs from whatever album they’ve just released. The 50th anniversary affords an opportunity to dig a little deeper. But will they take it? This being the first night of the tour, we’re about to find out. 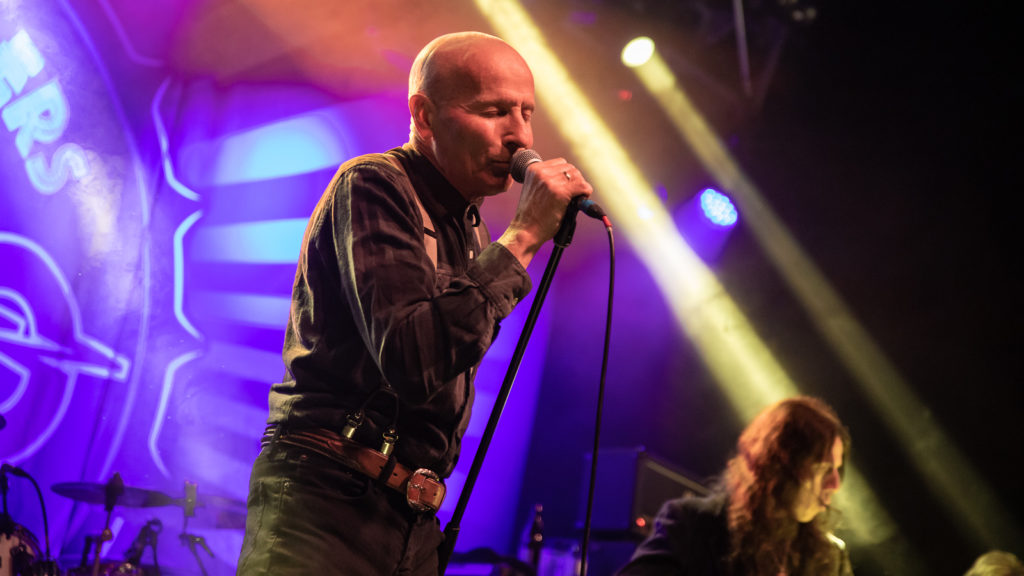 They’re in very familiar territory with opener Mother Mary. Dapper and shaven-headed, sprightly 70-year-old Mogg’s voice is as strong as ever on a song that underlines his status as one of rock’s most evocative and under-appreciated lyricists. (How many other metal acts would come up with a line like “Would you try to understand a wild colonial boy?”) As ever, Moore subjugates his technical brilliance to the needs of the song, effortlessly emulating Michael Schenker’s distinctive phrasing as his resists any temptation to overplay, having been assimilated into UFO far more effectively than Steve Vai ever was into Whitesnake. 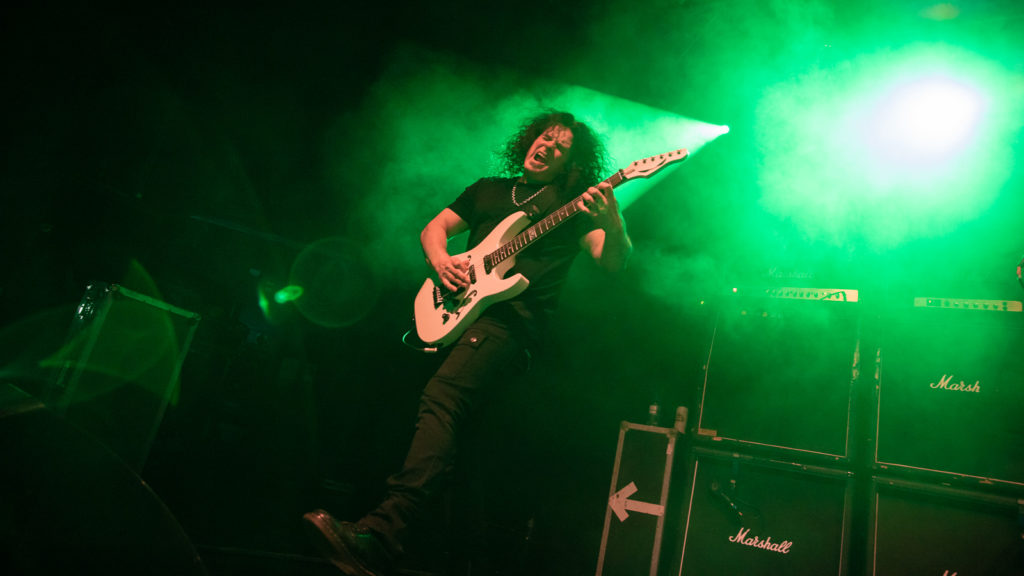 In fact, while we’re prepared to forgive a few signs of rust on this opening night, there’s really no need. Co-founding drummer Andy Parker, who’s enjoyed several stints with UFO and took time off for health reasons a while back, batters his kit like a man half his age. Paul Raymond has not only sported the same Ron Wood-lite haircut for the last 40 years, but equally impressively contributes to the distinctive melodic backbone of UFO’s sound on keyboards and rhythm guitar. Bassist Rob De Luca still faces what is arguably the biggest challenge, simply by virtue of not being the ebullient Pete Way, though his playing cannot be faulted. 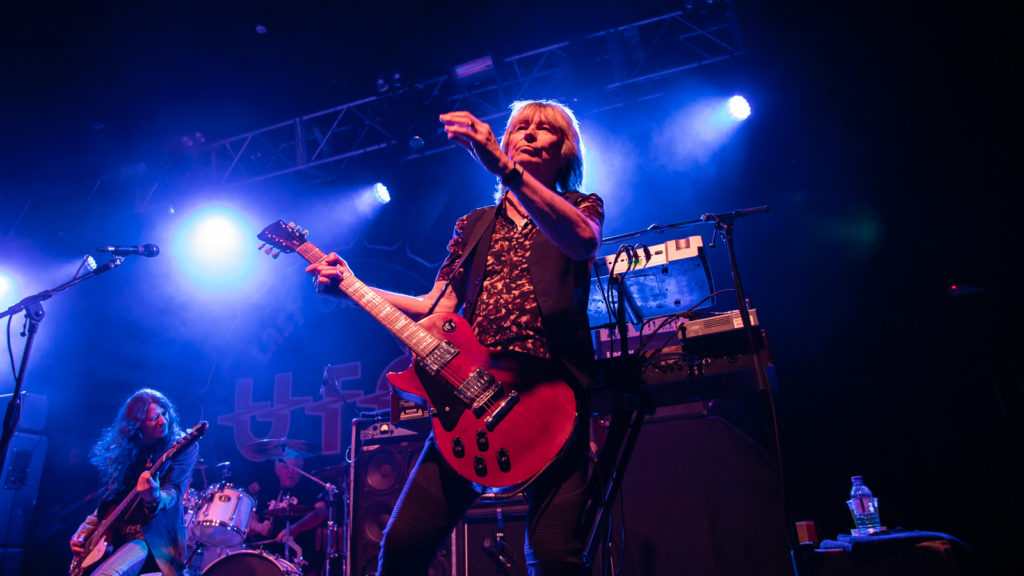 Set-wise, there are some pleasing digressions into more recent recordings, including two songs (Run Boy Run, Messiah of Love) from the band’s most recent studio album of original material, A Conspiracy of Stars. The lovely, bittersweet Baby Blue from You Are Here makes a very welcome return, permitting Moore to do the acoustic/electric guitar thing, while Burn Your House Down from Seven Deadly – surely the best song they’ve recorded in years – has earned its place among the Strangers in the Night stuff. 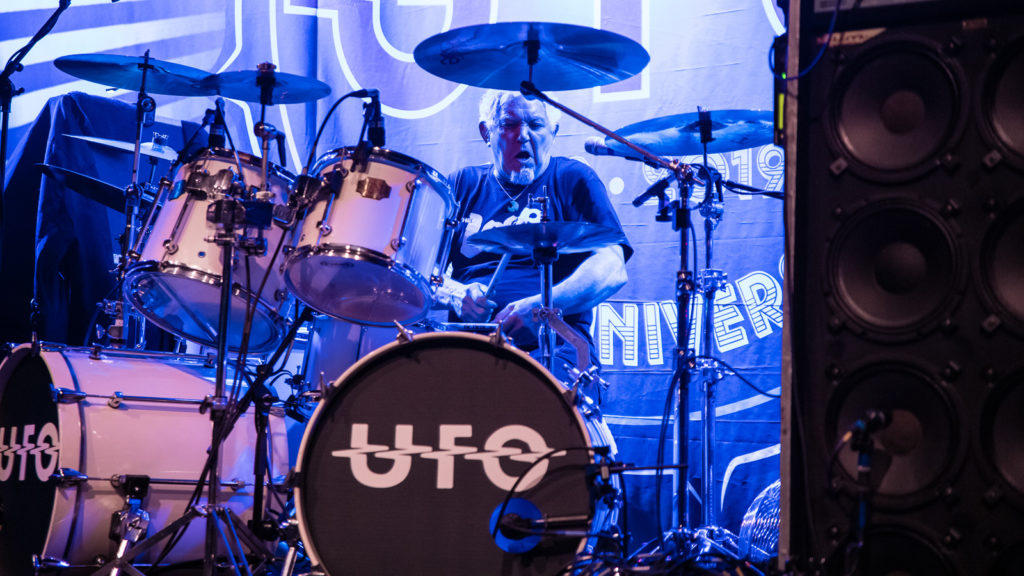 And, yes, they play a full eight songs from that collection (nine if you’re counting from the reissue). But there’s a reason why it’s considered one of the greatest double live albums of all time and that’s because it distilled the very best of UFO, circa 1978. So even as they dodge the opportunity to play at least something from their very early space rock period, it’s hard to resist the likes of a powerchord-heavy Love to Love and hugely extended Rock Bottom even as we know, by a process of elimination, exactly what the encore will bring (Doctor Doctor, Shoot Shoot). 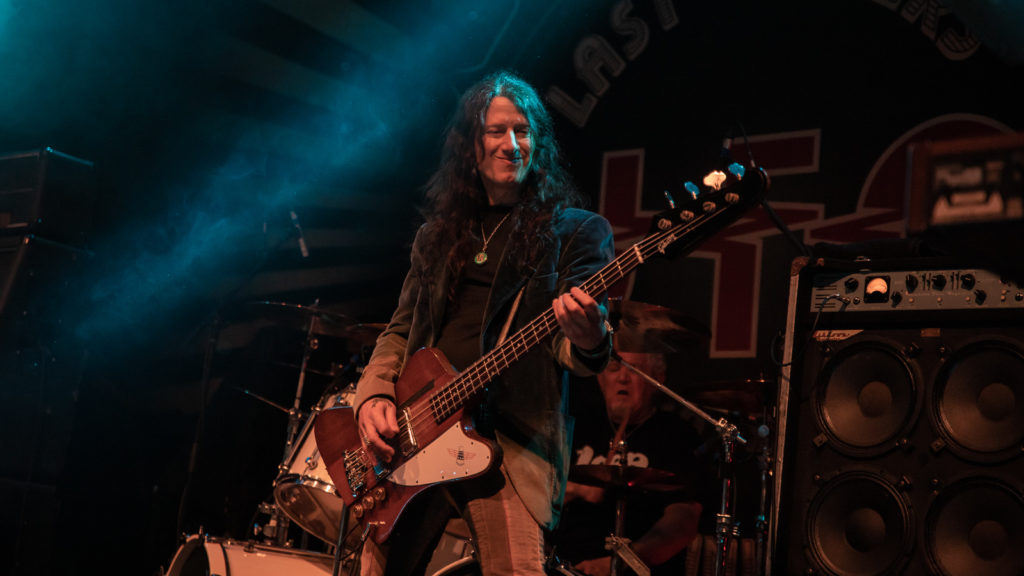 Dispensing his usual gnomic between-song banter, Mogg’s powerful voice has never sounded better. This at a time when certain singers of his vintage (Bob Catley, Ian Anderson, David Coverdale) are clearly struggling. That makes his decision to retire both disappointing and baffling. Perhaps tellingly, he makes absolutely no mention of it tonight. Maybe he’s already changed his mind. Fingers crossed, eh?