There was much baffled head-scratching in rock circles over this bill. On the previous two occasions that blues-rockers The Temperance Movement played Bristol, they headlined the Academy. Their third album, A Deeper Cut, hit number six in the UK charts last year. So it’s hard to understand why they would choose to take a support slot in a venue they could comfortably fill under their own steam. 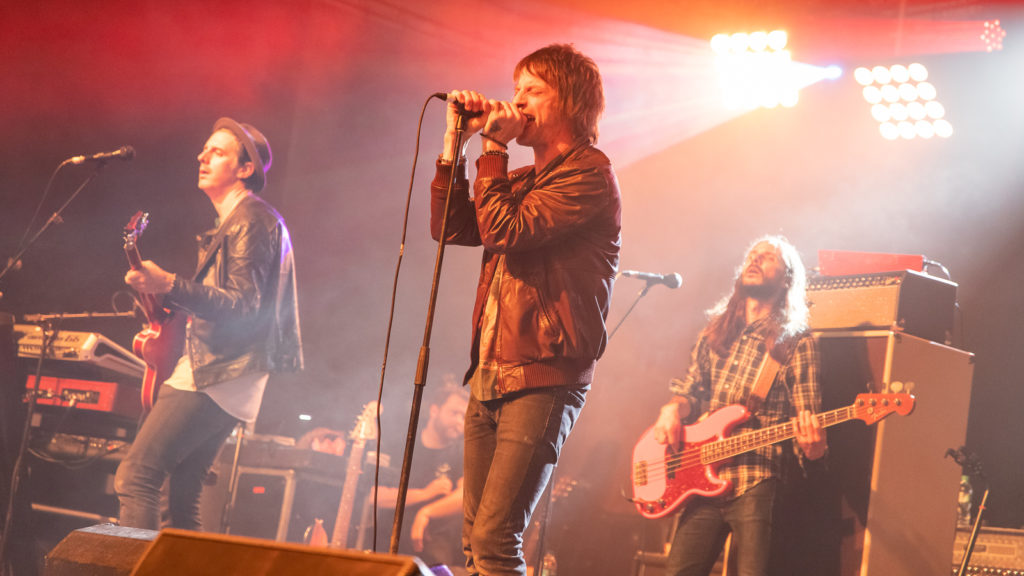 Still, their odd career choice is very much this audience’s gain as we effectively get two headline acts for the price of one. As usual, charismatic vocalist Phil Campbell is the centre of attention, showcasing those, ahem, distinctive interpretive dance moves that make vintage Joe Cocker look gainly. (Highlight: the scrawny chicken that’s just escaped from the pot and is attempting to flee, amid much wild flapping of wings.) Not even the distraction afforded by tambourine, shakers and harmonica can keep the guy still for a moment. 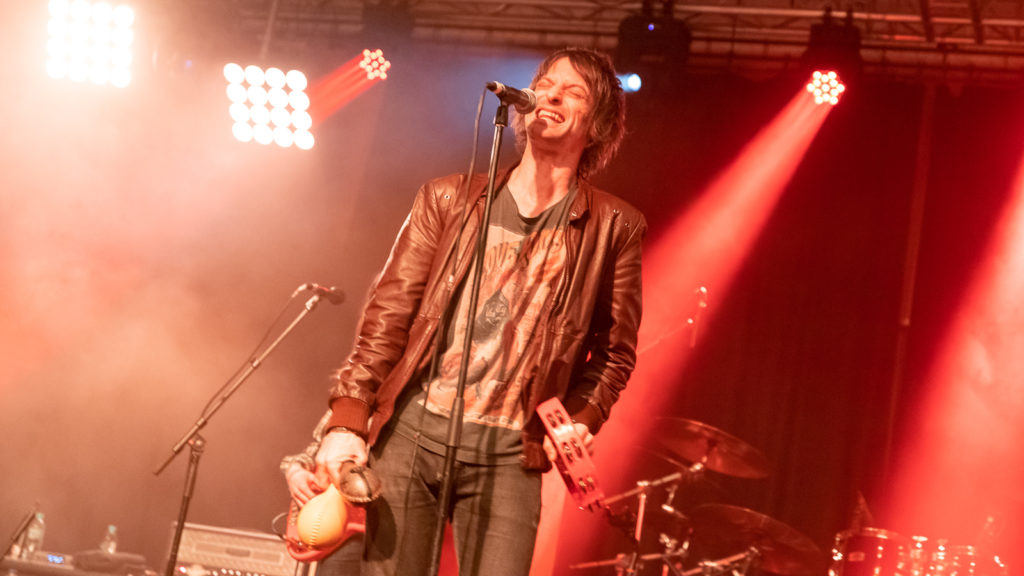 Perhaps it’s because the pressure of headlining is off, or because recent-ish recruits Simon Lea (drums) and Matt White (guitar) have now fully bedded in to the band, but from opening fan favourite Only Friend onwards this performance feels looser and more relaxed than usual. The Temperance Movement aren’t likely to turn into a jam band any time soon, but stretching out a little and giving these songs room to breathe serves to keep them from getting stale. 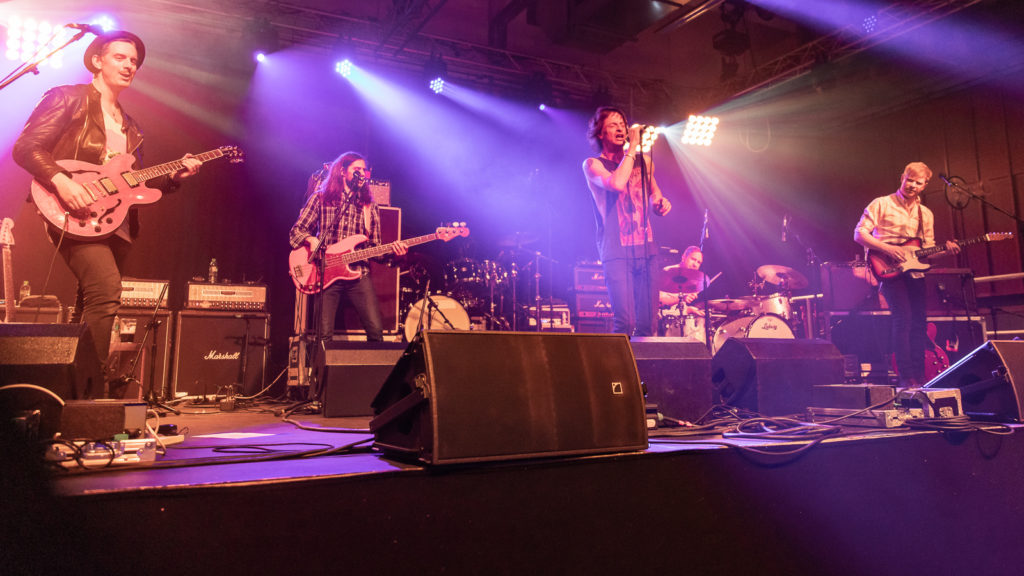 They pointedly overlook the ‘difficult second album’, White Bear, tonight in favour of three stompers from their debut before yielding to some of the mellower moments from A Deeper Cut, including the lovely Another Spiral and the title track – all of which serve to underline Campbell’s vocal versatility, from gravelly holler to emotive croon. It’s back to rockin’ for storming set-closer Built-In Forgetter as their measly allotted 40 minutes is up way too soon. 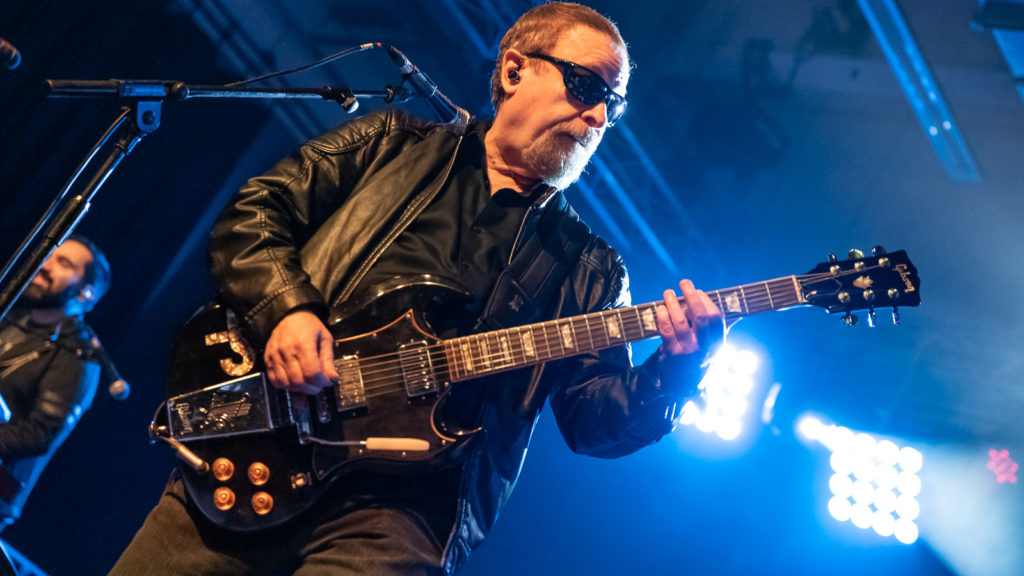 There’s no question that Blue Öyster Cult now rank among those bands who are described, usually disparagingly, as ‘heritage rockers’. Nothing they play tonight was recorded later than 1985. In fact, the set list could have been drawn from any date on the Club Ninja tour, which reached the Bristol Hippodrome in December of that year.

Against this, of course, they have a large and enviable catalogue of supremely literate rock to draw upon. Even if this had been a four hour performance, you can be sure that some punters would be disappointed to find their favourite song(s) omitted. This time, it’s the turn of the people who howl repeatedly for Astronomy to have a post-gig grumble. Unlike many heritage acts, BÖC like to shake up the set each night, which means that – apart from a handful of staples – you can never be sure what you’re going to get. Tonight, there’s a well-balanced mix, with a strong selection from the band’s oft-overlooked 1980s output. 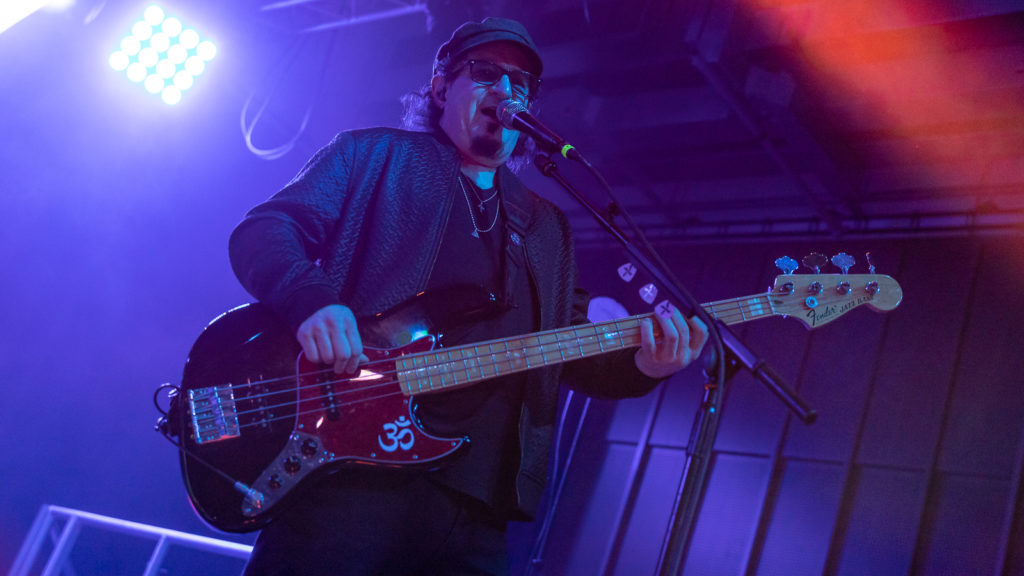 The Game of Thrones theme heralds their arrival on stage, with seventysomething classic-era survivors Buck Dharma and Eric Bloom – who hasn’t removed his shades since 1971 and will later hilariously complain that it’s too dark on stage – inevitably getting the biggest cheers. It’s straight back to 1973’s Tyranny & Mutation for The Red & the Black and … the sound is not great. For anyone further than halfway back in this packed room, it’s way too quiet – rather like being two fields away when your favourite band is playing an outdoor festival. It’s also rather indistinct, which is a killer blow to any band relying on intricate guitar interplay. Danny Miranda’s slap bass line in the magnificent Shooting Shark should punch you in the solar plexus; instead, it just sounds muffled. 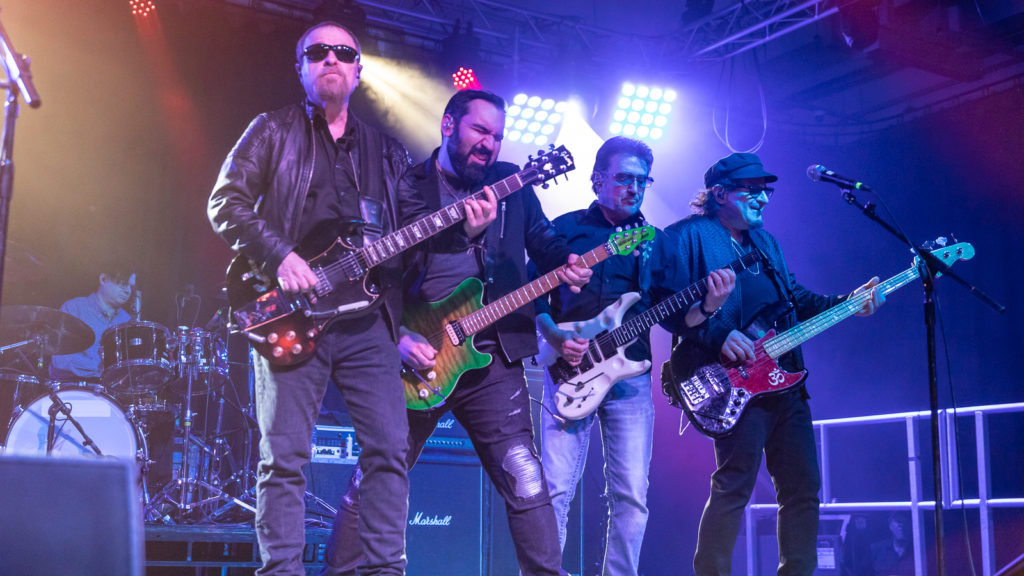 Things improve a little over the course of the evening, but it’s particularly frustrating given that the band are clearly on excellent form on this penultimate date of their UK tour. Sure, Bloom sings in a slightly lower register these days, which is to be expected give that he’s now 74. But the harmony vocals are spot-on, Bloom’s gruffer voice still melding perfectly with Dharma’s smoother tones. 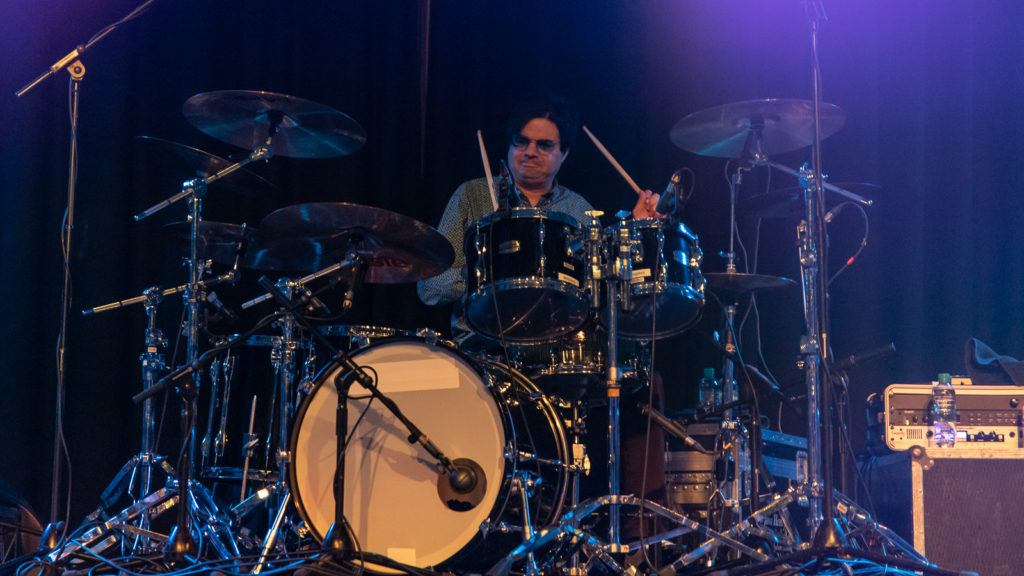 That full-tilt three-guitar onslaught is as thrilling as ever too, with Bloom magnanimously ceding some of the solos to talented ‘new boy’ 12-year Cult veteran Richie Castellano, notably during an epic Then Came the Last Days of May that sees him duel spectacularly with Dharma. 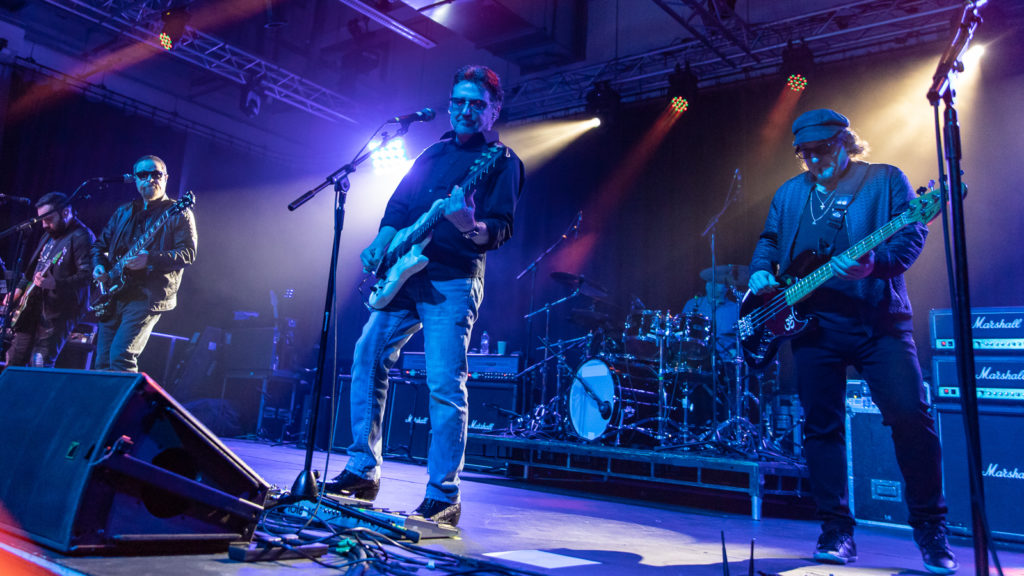 There’s plenty of eclecticism on display too. The proto-punky This Ain’t the Summer of Love gives way to the pop-metal sheen of the MTV-era Burnin’ for You, which, perhaps surprisngly, receives one of the biggest cheers of the evening. 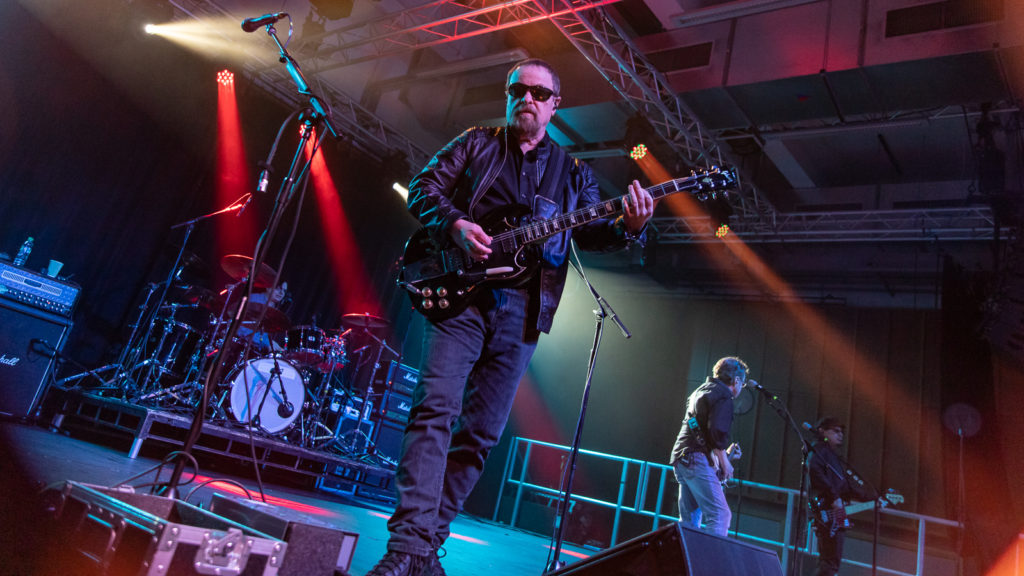 Later, Bloom promises us a rare treat in the form of a song they haven’t yet played on this tour. He obviously didn’t hear this reviewer’s pleading for Joan Crawford, because instead they do the late Allen Lanier’s mediocre New Wavey True Confessions. 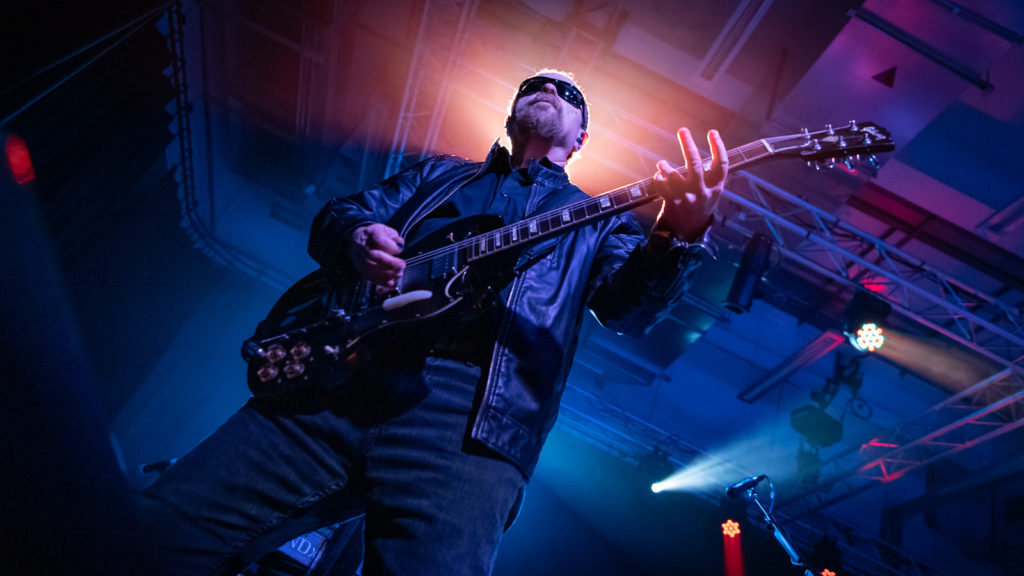 Things get back on track as they revisit that confident 1972 debut for Screams, which segues directly into the creepy She’s as Beautiful as a Foot, whose title and lyrics are arguably the least weird thing about it. Little wonder Lester Bangs described this out-there slice of early art-rock as being “as mysterioso as any Doors song”. And, of course, they do proper keg-party headbanging heavy metal in the form of Godzilla (“Oh, no – there goes Tokyo. Go, go Godzilla!” we all bellow obediently).

Naturally, That Song concludes the set and, rather like Kansas’s equally melodic Carry On Wayward Son, it remains one of the few endlessly playlisted classic rock anthems that never seem to wear out their welcome. The two-song encore begins with The Golden Age of Leather, that great valedictory anthem of a motorcycle gang who’ve reached the end of the line and decide to commit mass suicide. “Raise your can of beer on high/And seal your fate forever/Our best years have passed us by/The golden age of leather” runs the note-perfect a cappella intro. “A final outrage in this day of flaccid plumage”? Not quite yet, chaps…