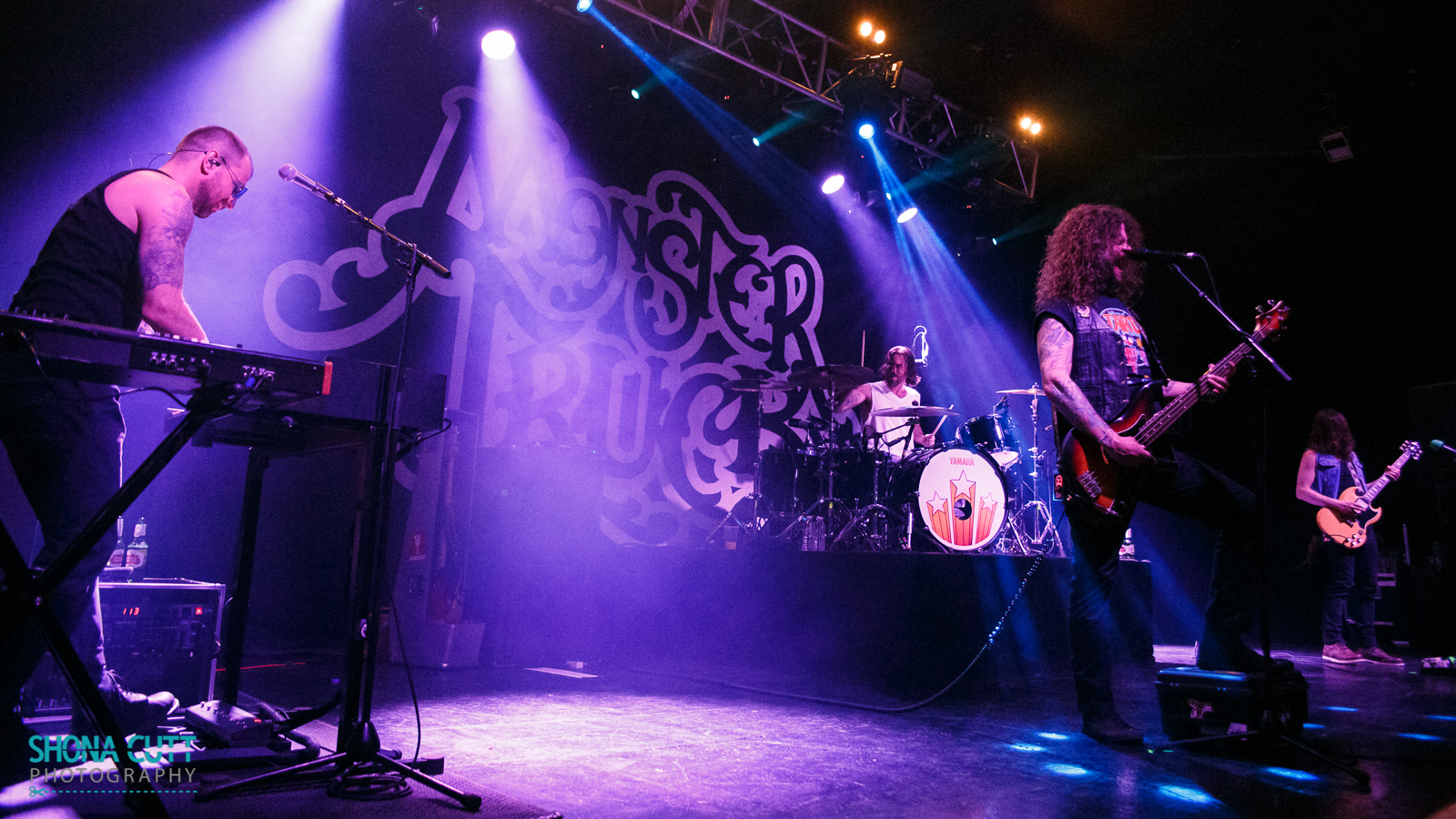 It’s the first time in Bristol for Monster’s Truck’s chums and fellow Canadians Royal Tusk. Their budget only stretches to a banner no bigger than a king-sized beach towel, which looks almost comically tiddly on the Academy stage, but there’s nothing small about their sound. 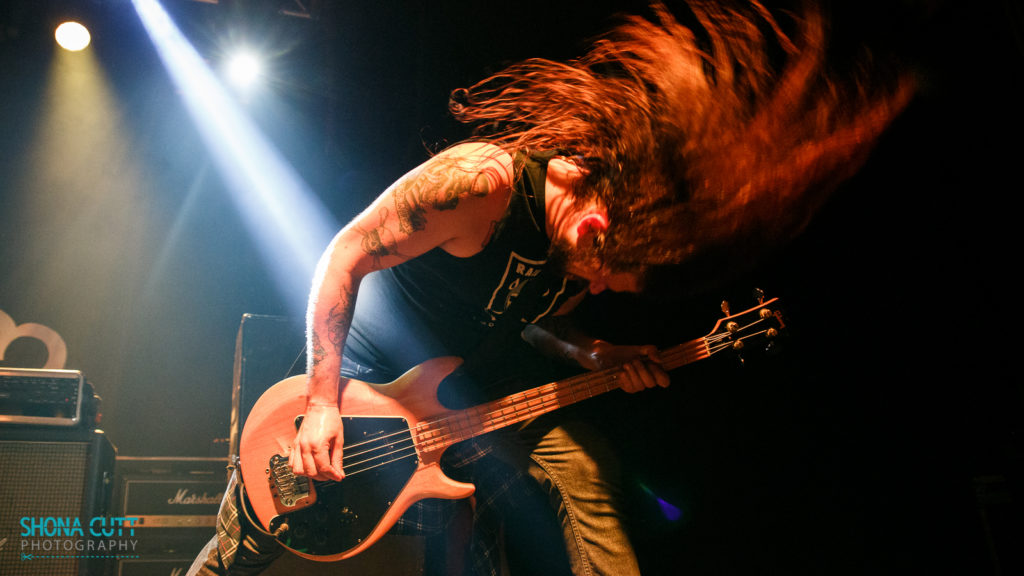 Having shed the last vestiges of all things drearily indie, they’ve emerged as a full-blooded hard rock band driven by big riffs, strong hooks and plenty of huge harmony vocals, which are at their best when melding the voices of guitarists Daniel Carriere and Quinn Cyrankiewicz with the harsher tones of bassist Sandy MacKinnon. 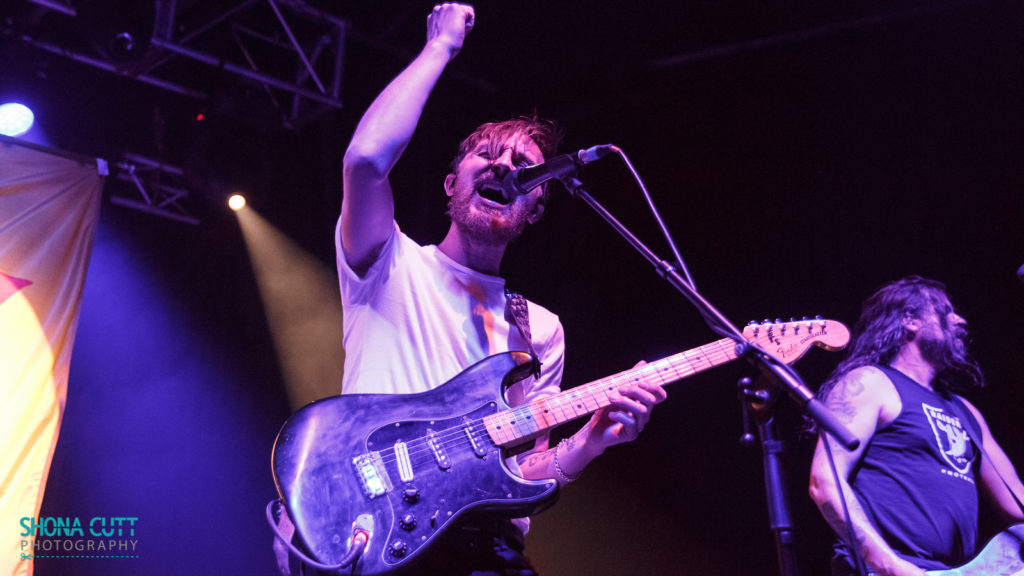 Their cover of Audioslave’s Cochise gives a fairly clear idea of where these guys are coming from. They certainly aren’t afraid of a big, pounding Glitter Band beat or old-school twin lead guitar breaks, with Die Knowing and the mammoth concluding Aftermath swiftly winning over the rapidly swelling crowd. Job done. New friends made tonight. 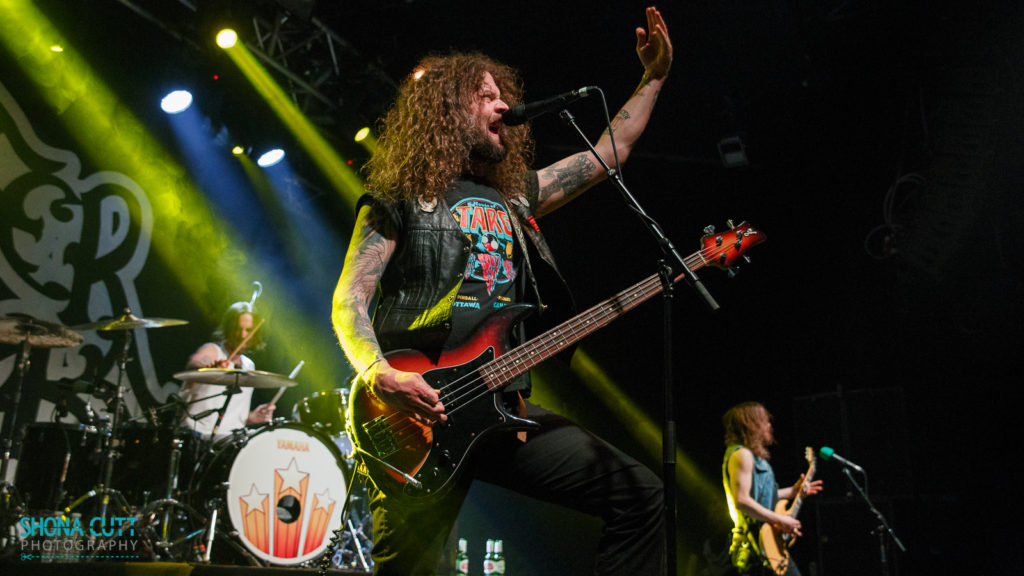 Since the demise of Motörhead, and with ongoing uncertainty about the future of AC/DC, a vacancy has arisen for a no-nonsense, unpretentious, heads-down people’s heavy rock band devoted to the simple pleasures of rockin’ and partyin’. Unsurprisingly, thrusting young contenders are thick on the ground. But unlike, say, Airbourne, whose debt to Rose Tattoo and AC/DC is both obvious and freely acknowledged, Ontario’s Monster Truck have managed to carve out their own classic rock niche without ever opening themselves to accusations of being mere copyists. They simply employ the same building blocks as the greats to create their own driving and distinctive denim cutoff anthems, served up in a fragrant cloud of (metaphorical, m’lud) weed smoke. 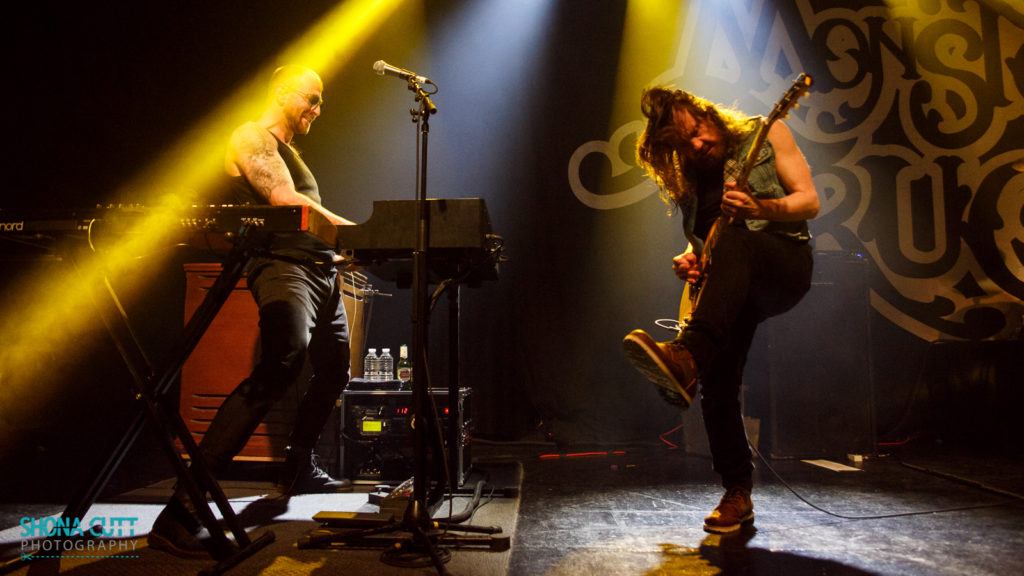 That this all feels so fresh rather than second-hand perhaps explains the Truck’s seemingly effortless rise. Five years ago, the quartet were all squeezed on to the Exchange’s tiny stage. Three years later, they played the Marble Factory. Tonight they’ve filled the Academy and Bristol is suitably delighted to have them back. “I want to have your babies!” bellows one over-excited lady, though it’s not clear whether this is a collective invitation or if she has one particular member of the band in mind. 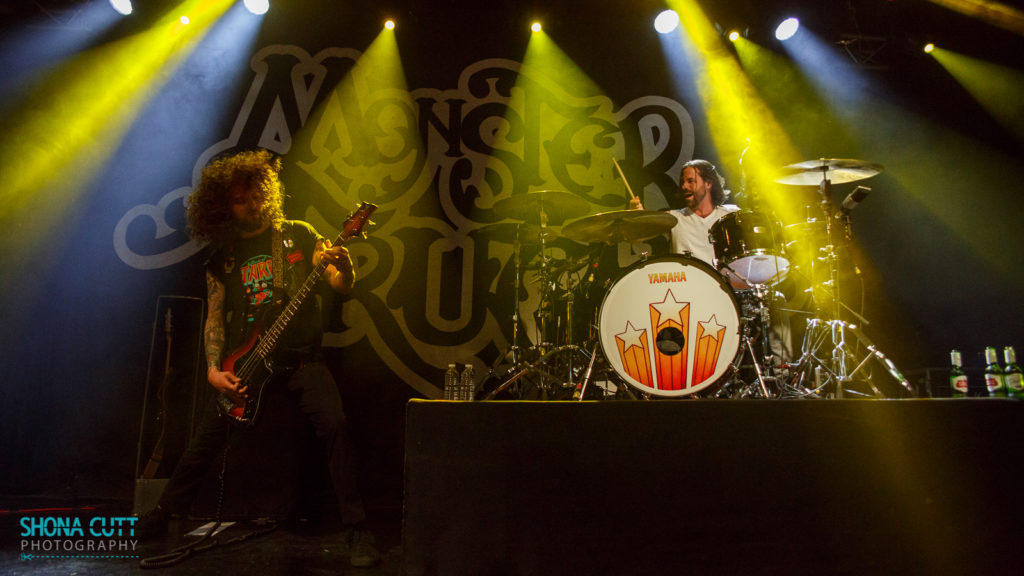 Some things have changed. Confidently taking advantage of the much bigger stage, bassist/vocalist Jon Harvey and guitarist Jeremy Widerman hurl themselves around, while Steve Kiely now sits atop an amply propotioned drum riser and Brandon Bliss has carved out his own keyboard fiefdom rather than having to squeeze onto the stage where he can. But other things remain exactly the same. Ever since their first show here, Monster Truck have never bothered with a grand entrances, fancy-pants light shows and props, or patience-sapping solos. Hell, at that Exchange show they didn’t even have a band logo backdrop. All of which serves to remind us: they’re here to rock. That’s it. 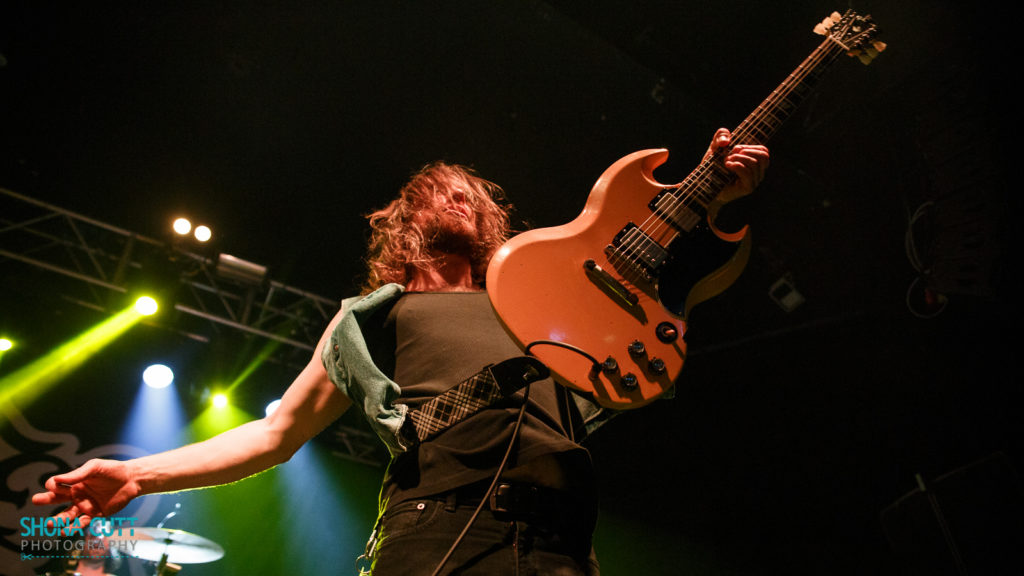 Don’t Tell Me How to Live is an early air-punching highlight that has everyone singing along with its celebration of outsider individualism. These sentiments may be redolent of the kind of southern rock that appeals to right-wing rednecks. But being Canadian, Monster Truck’s libertarianism has very different political roots. The sublime For the People (“The only time we got close to fuckin’ country,” quips Harvey) is a joyous, rabble-rousing anthem that’s explicit in its peacenik message: “We ain’t part of the war that you are fighting in our name,” declare the lyrics, which are somewhat less likely to go down so well in Trumpland. 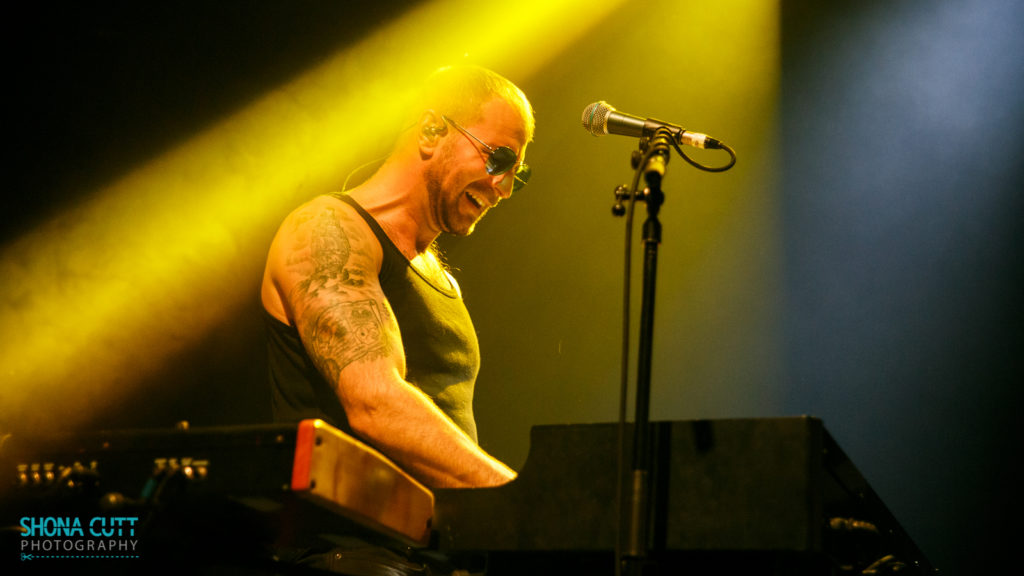 But, hey, let’s not get too deep here. Did I mention this was all about the rockin’? True Rocker and splendidly named Denim Danger alone fulfil all obligations on this front, and we’re never more than five minutes away from a big singalong “Woah-oh!” chorus, delivered by Harvey with a mighty roar. The unexpected set highlight, however, proves to be a gargantuan She’s a Witch, whose gut-punching riff, throbbing bass line and pounding drums really come alive on stage. 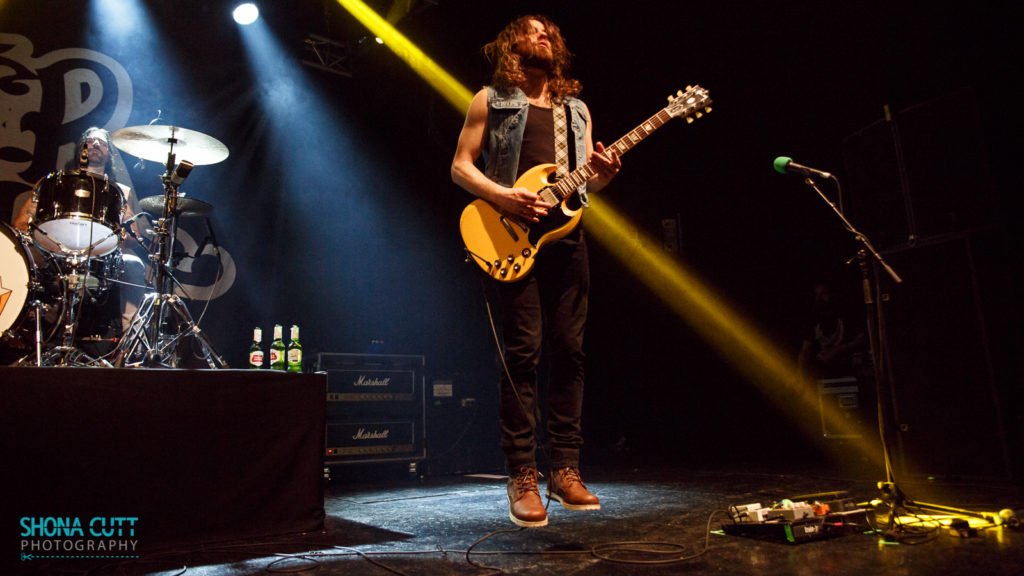 Notwithstanding the fact that  ‘Don’t Fuck with the Truck’ is both the band motto and a covetable T-shirt slogan, there are just a couple of nit-picky quibbles. Brandon Bliss’s Hammond keyboards, which add so much texture to these songs, occasionally get lost in the mix, particularly early in the show. The song sequencing also seems a bit off in places. Why Are You Not Rocking? is an odd choice of encore (hey – if punters aren’t rockin’ by then, the Truck have patently failed in their mission, which seems rather unlikely) and should perhaps be swapped with Don’t Tell Me How to Live or even the bong-friendly Righteous Smoke. Other than that, they’re unstoppable.