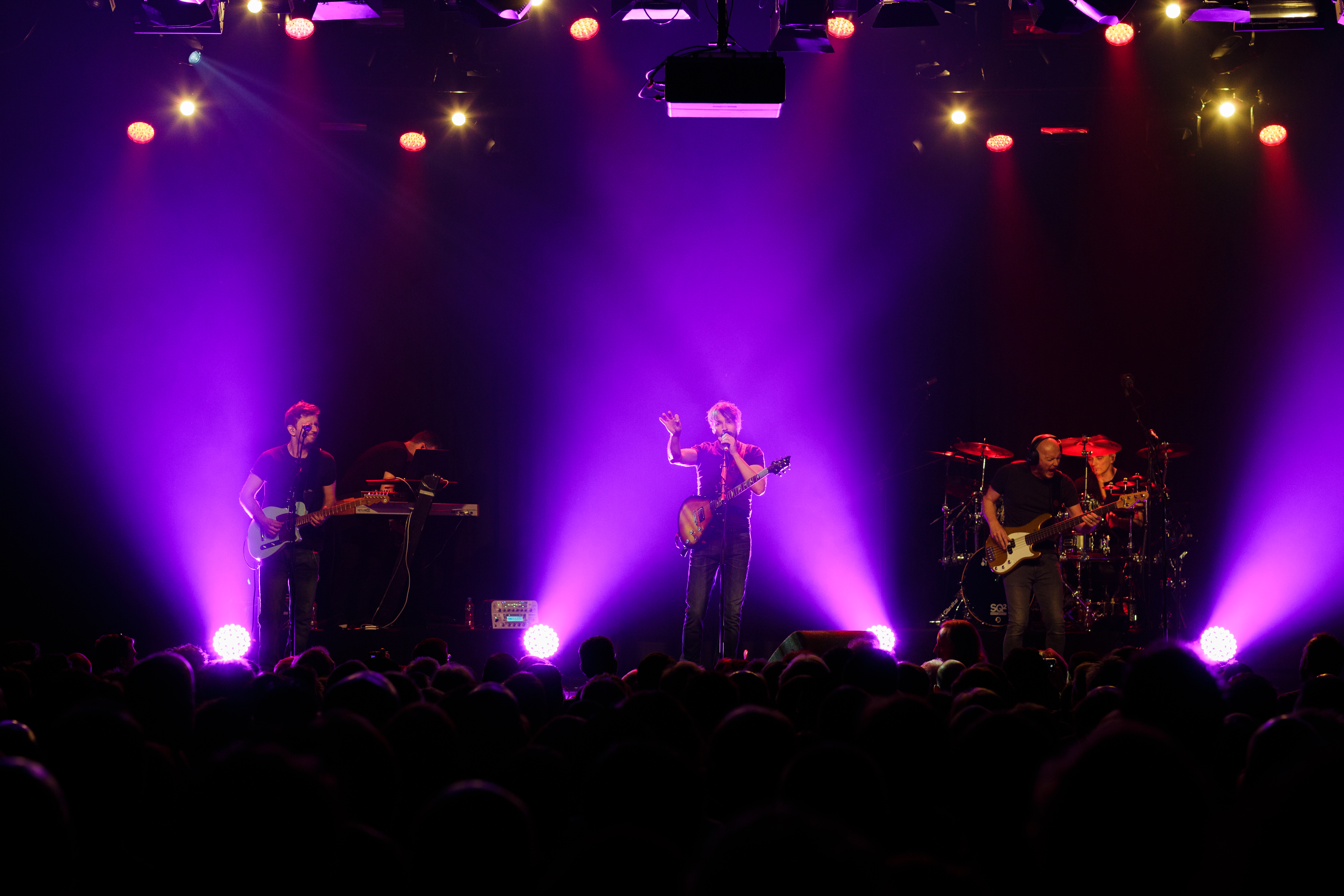 March sure is a bumper prog month, with two of the genre’s greatest modern acts, Riverside and The Pineapple Thief, at SWX, sandwiching veterans Soft Machine at the Anson Rooms. If that doesn’t float your boat, we also have plenty of doom and classic rock – old and new.

Check the coming soons and you’ll see that following the sad demise of The Tunnels, this year’s annual Focus gig takes place at the Fleece in June. Further ahead, SWX cements its reputation as Bristol’s home of power metal following that hugely successful Powerwolf show in January with a gig by Gloryhammer in October. Not heard of them? This is Bristolian Alestorm frontman Christopher Bowes’ equally silly, sci-fi-fixated side project. Given that support comes from Finns Beast in Black and Italian dwarven marauders (no, really) Wind Rose, this one is likely to sell out rather quickly.

Expect to see grown men weeping openly in the streets as UFO combine their 50th anniversary tour with their Last Orders farewell tour, which kicks off in Bristol. Fiftieth anniversary? That’s right: UFO may have scored their greatest commercial success in the late ’70s with Strangers in the Night – one of the all-time great double live albums from an era that was awash with them – but their roots are actually in the swinging sixties. Check out the vid above for 1971’s Prince Kajuku (yep, UFO were hippies once too – just not very convincing ones) and marvel at how closely it resembles the hip stoner/space rock of today’s whippersnapper rockers. Famously debauched, they also consumed more drugs than all the hippies and punks combined, remarkably emerging more or less unscathed (though it’s been touch and go with former bassist Pete Way). Anyhoo, with his 71st birthday fast approaching, frontman Phil Mogg has decided to knock it on the head. That’s a particular shame because while UFO, in common with many bands of their era, have suffered long creative fallow periods, they’ve been on a roll for the last 15 years or so with a string of excellent albums.

Pleasingly unashamed seventies-style AOR/classic rockers who’ve appeared on bills as diverse as Ramblin’ Man and Fairport’s beardy Cropredy fest as well as supporting the likes of Phil Collins, Thunder, Deep Purple and Status Quo, Cats in Space do the ELO/Queen/10cc thing with great aplomb and a welcome sense of fun. New album Daytrip to Narnia is out . . . today! Rather splendidly, support comes from all-female NWOBHM trio Rock Goddess, who got back together in 2013 and still feature sisters Jody and Julie Turner (who were 13 and nine-years-old respectively when they founded the band in 1977). Anyone else out there remember seeing them on that bizarre all-woman punk bill with the Androids of Mu at the pre-makeover Trinity back in the early ’80s? They probably don’t play the Gary Glitter cover these days, mind…

It’s the biennial Hayseed Dixie show at the Fleece and nothing much seems to have changed in the rockgrass pioneers’ world since their previous gig here. They haven’t released an album since 2017’s Free Your Mind . . . and Your Grass Will Follow. This continued to dilute the rock’n’metal covers with some unwelcome other stuff (Love Train, anybody?), but – hey – it does include a cover of Skynyrd’s brilliant The Ballad of Curtis Loew, so that’s OK. The line-up remains the same as before too, with John Wheeler at the helm and newest recruits Hippy Joe Hymas (mandolin) and Tim Carter (banjo) still on board. This also gives us the excuse to include the first of two versions of Eye of the Tiger this month.

Dave who? Only “The voice of Eye of the Tiger” as the poster is so eager to remind us. The 65-year-old formerly beret-wearing singer has enjoyed three stints with Survivor (being fired twice), during which he sang on the chart-topping, Grammy and Oscar nominated Rocky III theme song. He didn’t write it, though (Jim Peterik and Frankie Sullivan get those substantial royalty cheques), which is presumably why he has to continue to haul ass performing it live. This is the second of just four UK dates on his current tour. Support comes from late NWOBHM-era also-rans Chrome Molly.

As so often in the doom genre, Richmond’s Windhand build on ye olde Sabbath template, but have something of a trump card in that rarest of doom personnel – a lady vocalist (Dorthia Cottrell).  2015’s Grief’s Infernal Flower proved to be their highest charting release to date, thanks in part to the classy production by Jack Endino, of Nirvana and Soundgarden fame. So it’s hardly surprising that they re-teamed with him for their latest release, Eternal Return, which adds some grunge and psychedelia to the mix. Support tonight comes from aptly named Italian sludgers Grime.

Bristol’s very own socially conscious hardcore/black metally Svalbard headline a four-band bill to celebrate the release of their new album It’s Hard to Have Hope. Check out guitarist/vocalist Serena Cherry’s recent riposte to members of the troll community who assert that women have no place in metal.

Last seen here supporting Jaret Reddick at the Thekla, ace Southampton close harmony trio and “rock chicks in disguise” the Lounge Kittens return to play their biggest Bristol show to date. Jenny, Timia and Zan specialise in witty reworkings of rock and metal songs (with a few hip-hop numbers chucked in), accompanied by many a hilarious video. Lately they’ve branched out a bit by recording an Avicii medley and speaking out about mental health. They’ve also followed up the Sequins and C-Bombs album with a crowd-funded EP, Have Another, which includes their own unique version of Thunder’s Love Walked In.

It’s not all death metal and black metal in Poland, you know. That said, like most great modern bands, Warsaw’s Riverside have roots deep in extreme metal. Not that you’d realise this if you’re familiar only with their magnificent, atmospheric modern prog rock. Indeed, main composer/bassist/vocalist Mariusz Duda indulged his enthusiasm for experimental/ambient music on the 2016’s Eye of the Soundscape remix collection. After a slow start in this country, they’re finally winning over even the more conservative proggers, following their brilliant Love, Fear and the Time Machine with the equally excellent Wasteland album – the band’s first without guitarist Piotr Grudziński, who died suddenly of a heart attack. In Prog magazine’s recent readers’ poll, Riverside were voted second best band of the year, ahead of Marillion and King Crimson.

Jazz is generally beyond this section’s remit, but like all good prog enthusiasts we’re happy to flirt with our jazzer chums if they’re prepared to reciprocate by dialling down the snobbery just a notch or two. Now celebrating their, er, 51st anniversary, Soft Machine’s first gig in Bristol for a couple of years is part of the Bristol Jazz and Blues Festival. So who the hell’s in Soft Machine these days? Can’t be Kevin Ayers, Daevid Allen, Hugh Hopper or Elton Dean, for obvious reasons. Turns out that it’s John Marshall, Roy Babbington and John Etheridge, all of whom played in the band in the early to mid-’70s, notably on the Softs album (they’re all in the vid for Tale of Taliesin above). They’re now joined by that busy Theo Travis fella, who successfully straddles the prog/jazz boundary and is probably best known to those of us of the proggy persuasion for his work with Steven Wilson, Gong and The Tangent. Expect to hear classic stuff from the ’70s, plus new material from the band’s recent Hidden Details album.

Taking their name from a line of dialogue in Kasi Lemmons’ 1997 film Eve’s Bayou (there’s obscure for you), Yeovil’s The Pineapple Thief pulled just 20 paying punters to their first Bristol gig at the Fleece back in 1999. Yep, it’s taken them an awfully long time to become an overnight success, hampered as they are by their penchant for melancholic prog. But while all those fad bands who cater to the fickle tastes of critics have come and gone, Bruce Soord’s mob have continued their sometimes painfully slow progress to the point where they are now no longer seen as simply existing in Steven Wilson’s slipstream. Excellent new album Dissolution was justly voted Album of the Year by Prog readers (grab the 5.1 mix on blu-ray if you can – you won’t regret it). Oh, and not only is King Crimson drummer Gavin Harrison still with The Pienapple Thief, but you can also see another of Crimson’s three (count ’em!) drummers, Pat Mastelotto, alongside former Porcupine Tree bassist Colin Edwin in tonight’s multi-national support act O.R.k.

A swift return for these rapidly rising, multiple porcine Geordies, who were last here to launch their album King of Cowards at Rough Trade back in September. Like most stoner/doom acts, they feed at the trough of Sabbath – and they’re rather good at it too. As The Guardian remarked approvingly of King of Cowards: “Pigsx7’s is a world of downtuned doom in which no riff is too monolithic, no chord progression too bludgeoning. They sound as if they should be caught between the conflicting urges to hit a massive bong or go out on choppers.”

Yeah, that Joe Payne: the former Enid frontman with the amazing voice (Prog magazine’s Vocalist of the Year 2014 & 2015, lest we forget) who suffered a breakdown and left the band in 2016. The good news is that he’s back on track with a new EP, What Is the World Coming To, which boasts what must rank as the campest cover design ever. For this first post-Enid co-headlining tour, Joe is joining forces with Doris Brendel, whom we last saw singing backing vocals with Fish at the O2 Academy. Each of them will be performing new material with their respective bands, plus some more familiar songs from previous collaborations.

This Horror in Extremis co-headliner promises an enticing evening of infernal noise. We almost saw oft-mispronounced Brummies Anaal Nathrakh (it comes from John Boorman’s Excalibur, fact fans) at Temples 2014, but the room was too packed to get in. Latest album A New Kind of Horror covers WWI, modern politics and, erm, the letters of D.H. Lawrence. Last seen at the Fleece in 2016, veteran avant-metal Satanists Akercocke subsequently released their Renaissance in Extremis comeback album, which Metal Hammer praised for its “unsettling sensation of skipping through a wave of (unfeasibly good) radio stations as different styles coalesce in eerie sync: prog, thrash, death, black, punk, post-punk, goth, ambient and even post-apocalypse jazz cabaret.”

The Picturebooks, Exchange, May 9