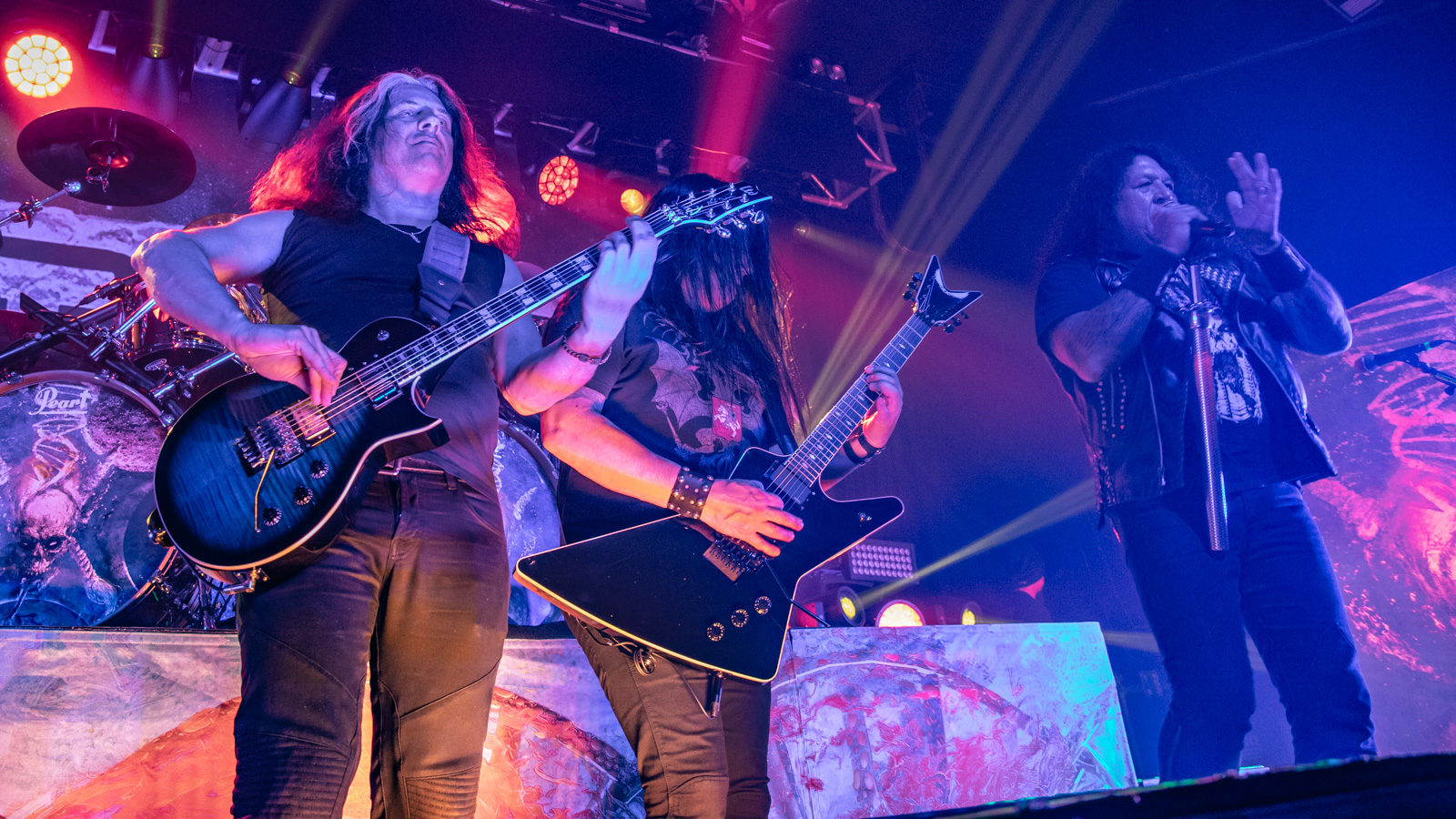 Coronavirus? Pah. When the final pandemic wipes out 99% of humanity, you can be certain that the world’s gnarliest veteran metal bands will still be out there touring as they continue to play to packed houses of equally hardy survivors.

“With all the bullshit going on in the world, as least we’re here,” grins Testament’s Chuck Billy. 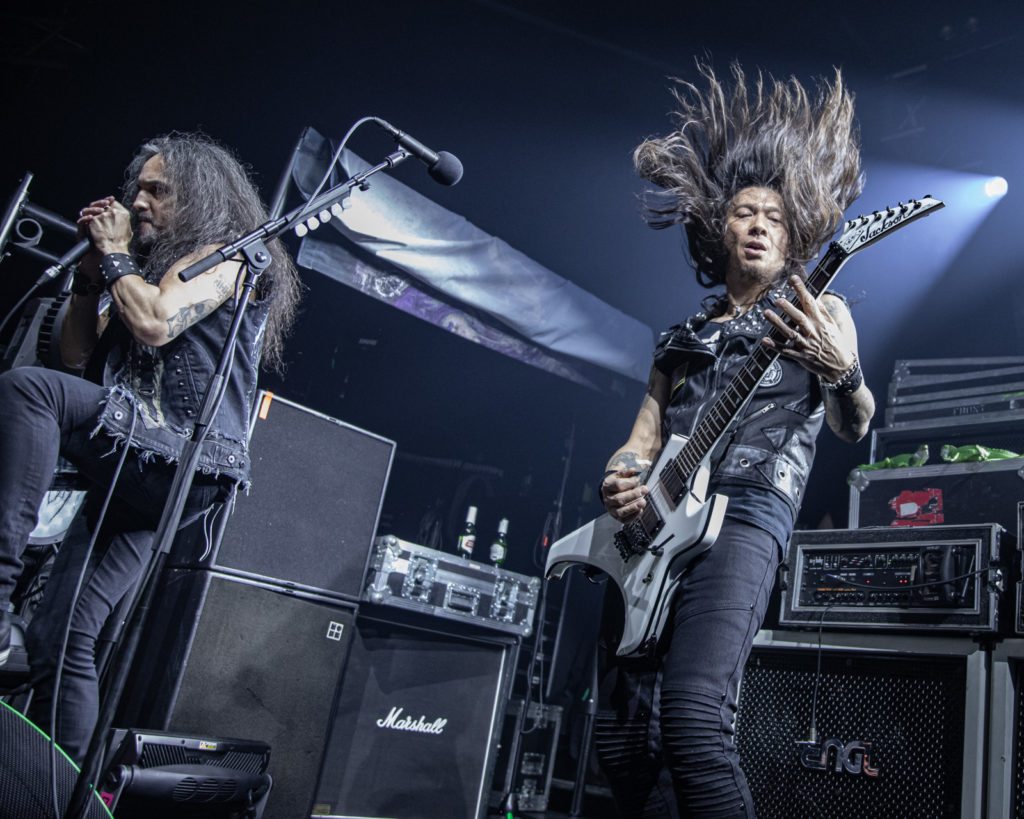 This Bay Strikes Back tour has been wending its way through infected Europe for more than a month now, with just the one cancellation forced upon it in Italy. It’s the first time these three titans of the thrash metal scene in San Francisco’s creatively fertile Bay Area have ever toured together, offering suitably delighted punters a big-value package of more than three hours of double-kick drum abuse, squealy guitar solos and furious chugging rhythms. 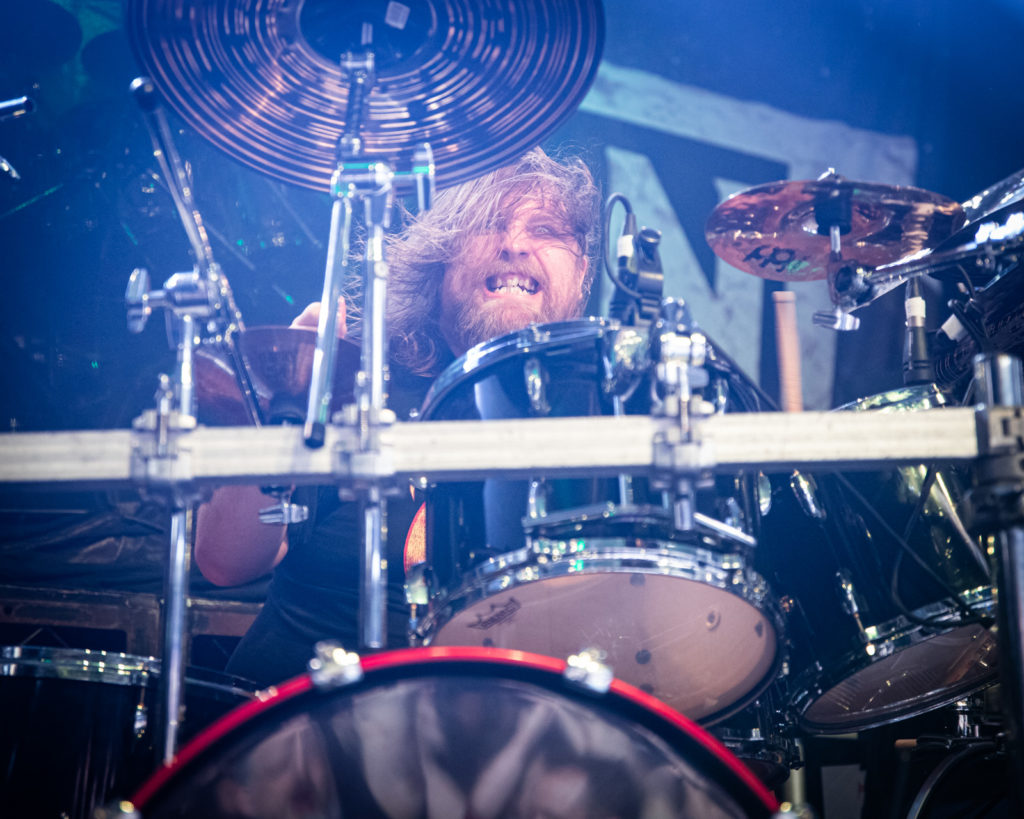 You know you’re in for a good evening when it’s just after 6:30pm and a huge mosh pit has erupted, everyone’s chanting the band’s name and waves of crowd-surfers are already being hauled over the barrier. Clearly, many of us have a soft spot for Death Angel, who were always the babies of the genre, looking about 12 years old when their debut album The Ultra-Violence, was released back in 1987. Founded by a bunch of Filipino cousins, they’ve undergone plenty of line-up changes since then, with only ace guitarist Rob Cavestany and frontman Mark Osegueda remaining. 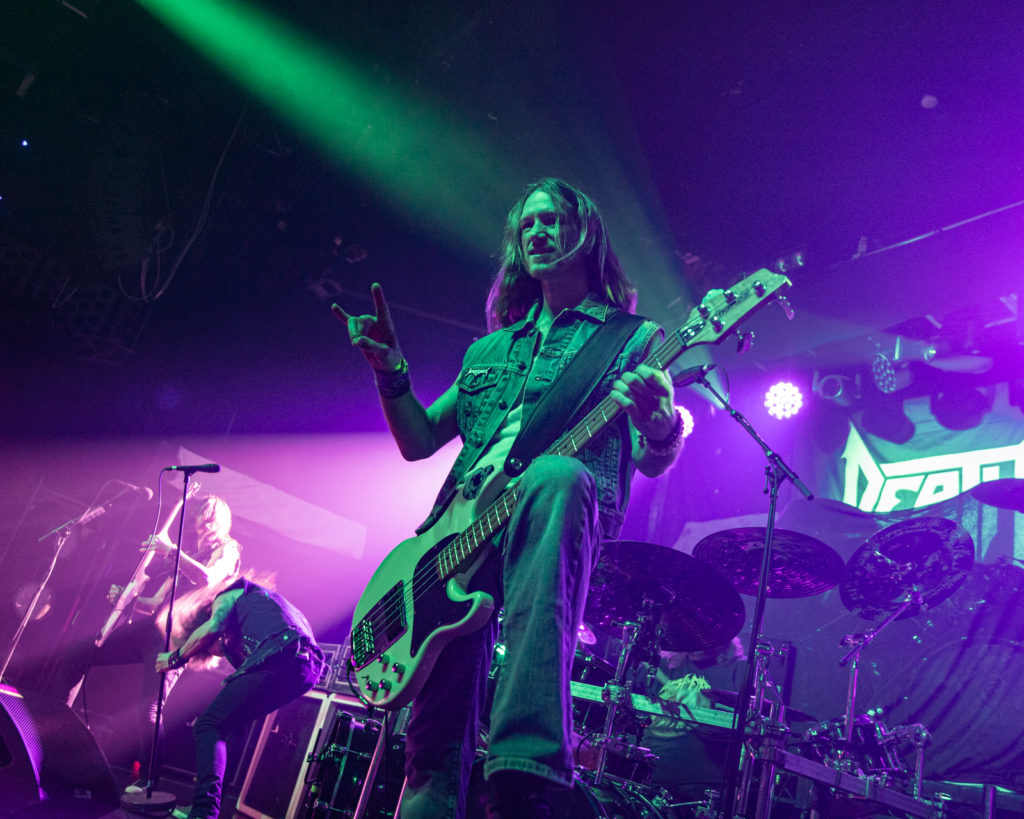 What’s striking about seeing the belatedly Grammy-nominated quintet on a bill like this is just how far they’re prepared to deviate from the thrash/speed metal template with lengthy, complex compositions such as Claws In So Deep, which dip an occasional toe into modern prog-metal. 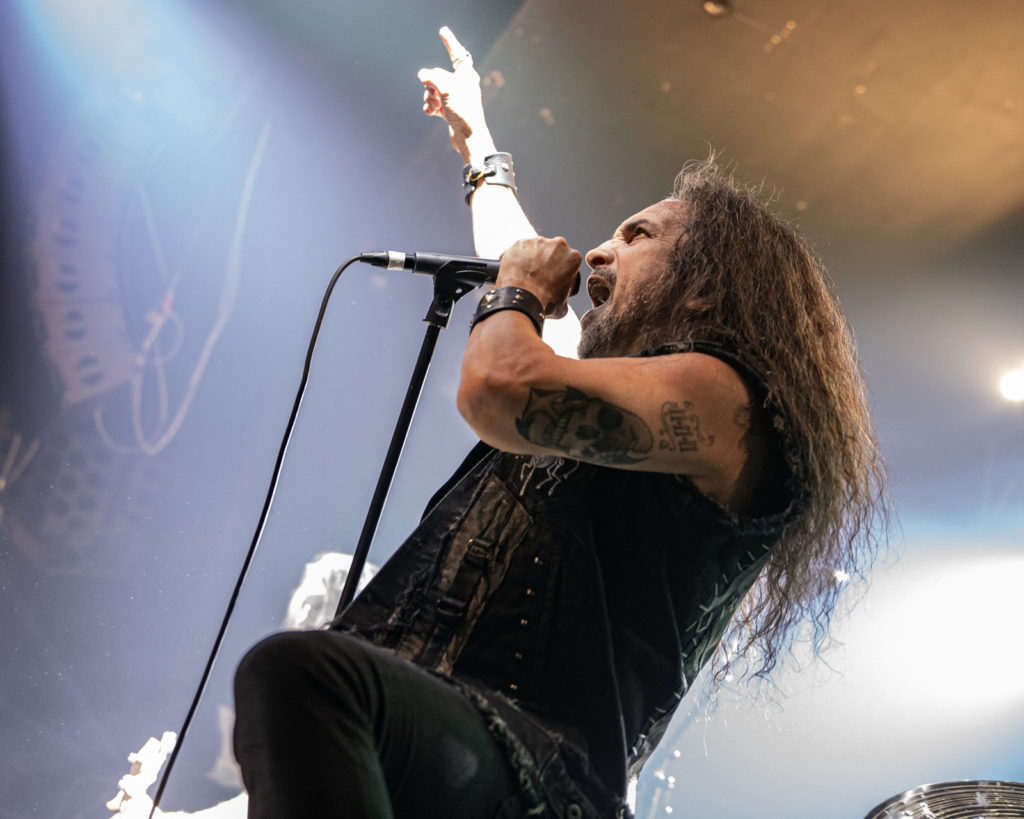 It’s rather late in the day for ego games and one-upmanship, so Death Angel get a generous opening slot with excellent sound and as much space to roam as Testament’s gear will permit as they run through a career-spanning set that underlines their consistency over many decades. Let’s hope they make good on the promise to come back and headline.

In the first of a brace of amusing intro tapes, Exodus give us one of the more entertaining examples of that plague of YouTube mash-ups: Slayer’s Angel of Death and the Benny Hill theme tune. Nestled comfortably at the top of thrash’s second division, they’re assured of a footnote in rock history for featuring future Metallica guitarist Kirk Hammett as a founder member. 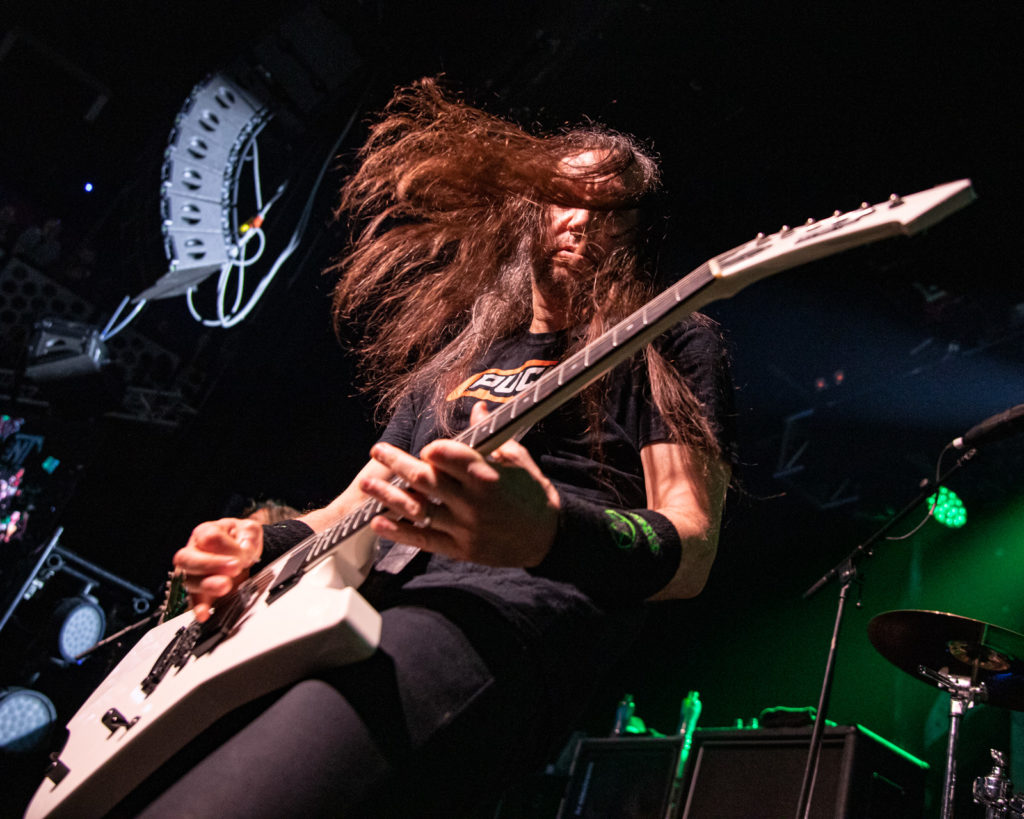 Still fronted by the increasingly portly Steve ‘Zetro’ Souza, whose genial demeanour and paint-stripping vocals make him one of thrash’s most distinctive figures, they’re a band whose patchy oeuvre has cost them in the popularity stakes. But they’re in their element on stage, feeding off the energy of a suitably rabid audience with an hour-long, cherry-picked selection of that trademark high-energy “good friendly violent fun”, Souza saluting the late lamented Bierkeller (Exodus played there in 1989) and orchestrating a huge wall of death. 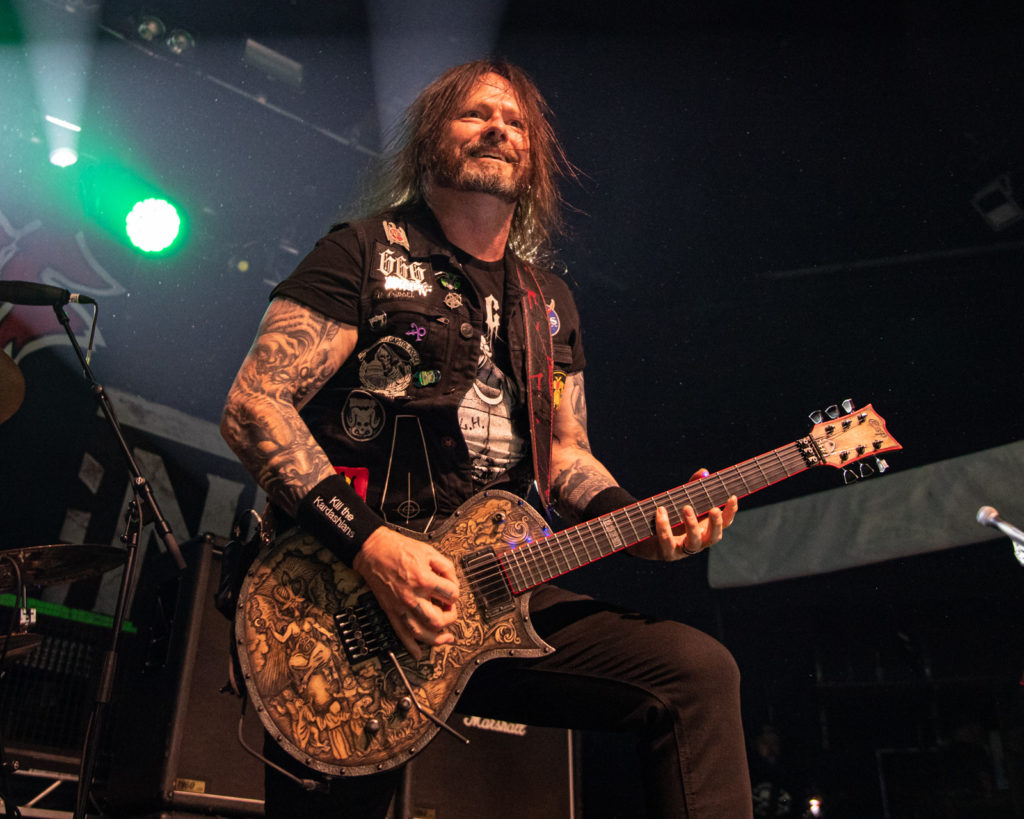 It’s particularly good to see guitarist Gary Holt back in the fold. Last time Exodus played here, he was off depping for the late Jeff Hanneman in Slayer. There’s a nod to those in the know when he starts playing a few bars of Raining Blood after Souza announces Toxic Waltz. Down the front, a proud dad hoists his young son onto his shoulders and the lad air-punches and headbangs away until he’s attracted the attention of bassist Jack Gibson.

The early part of the set brings a few pleasant surprises, notably Deathamphetamine (“it’s about a really bad drug,” Souza tells us, a tad unnecessarily) from the splendidly named Shovel Headed Kill Machine album. But we all know how the show will end – with Strike of the Beast, which has concluded every gig they’ve ever played in Bristol. 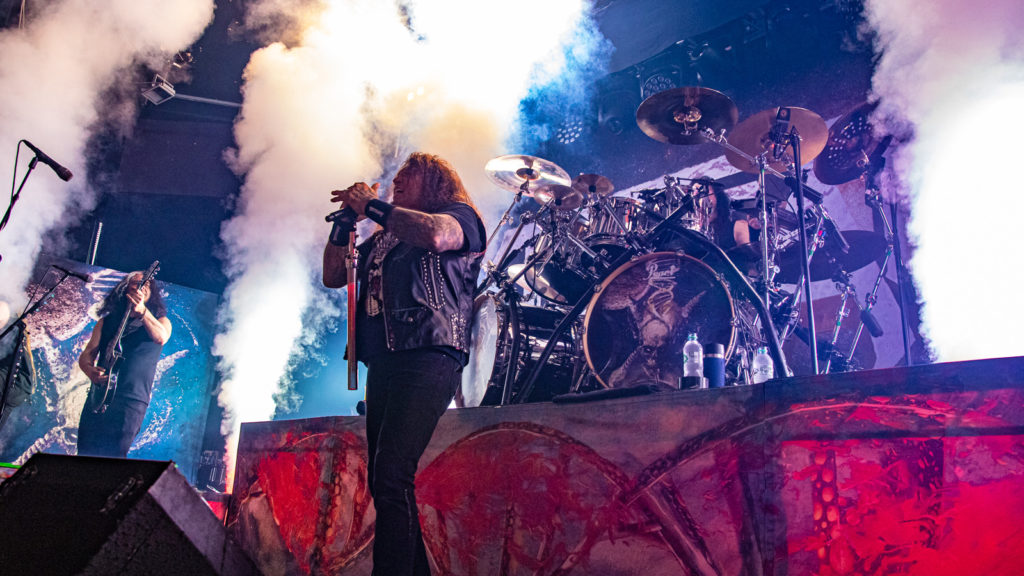 In all this reviewer’s decades of local gig-going, I’ve never encountered a band who thought to use sixties doo-woppers The Dovells’ Bristol Stomp as an intro tape. Strange, then, that it should take a thrash metal act from San Francisco to exploit its potential. Yeah, OK, so the song refers to Bristol, Pennsylvania, but its lyrics (“The kids in Bristol are sharp as a pistol/When they do the Bristol Stomp/Really somethin’ when the joint is jumpin’/When they do the Bristol Stomp”) offer suitable incitement for hometown hepcats like, er, ourselves to rock.

Testament really are one of those bands who improve with age. They’ve never been better, or tighter, than they are tonight, probably thanks to being honed to perfection during this lengthy tour. Their not-so-secret weapon is Alex Skolnick – one of the finest guitarists in this or any other genre, and certainly the only thrash metaller to moonlight with his own jazz trio. He makes full use of the two ego risers at his disposal so every drooling guitarist in the audience can observe the full fretboard action. 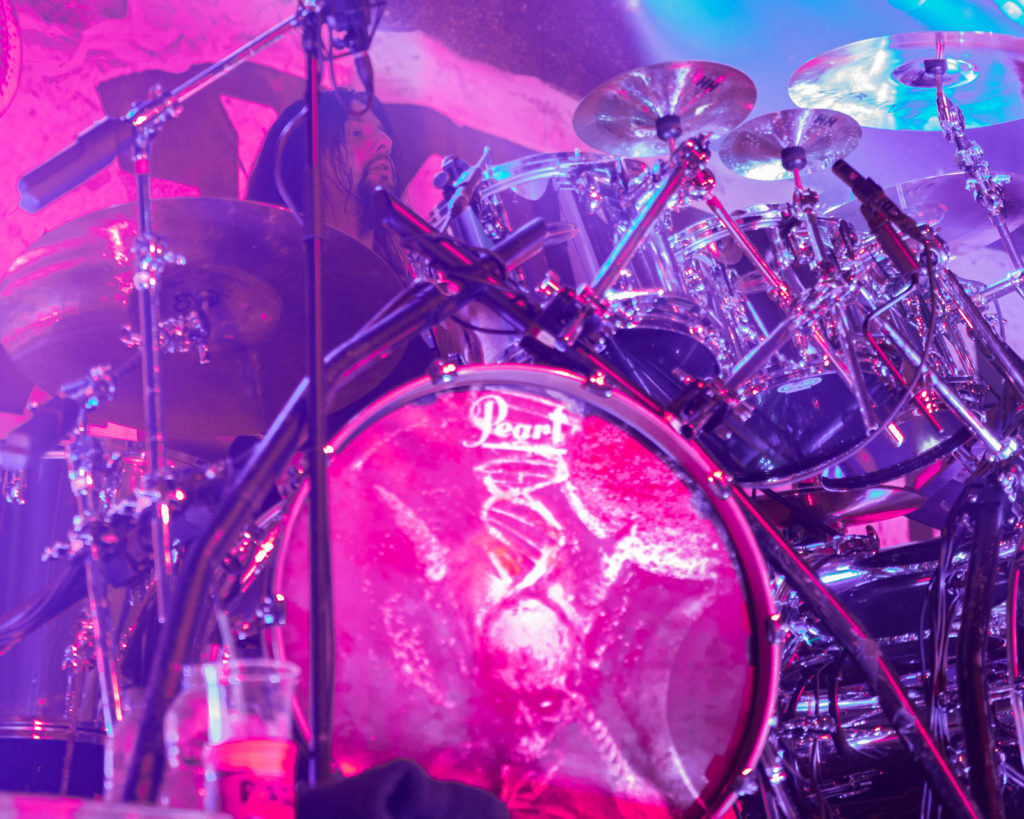 Their second not-so-secret weapon is former Devin Townsend sidekick Gene Hoglan. Not for nothing is this guy referred to by frontman Chuck Billy as “the atomic clock”. A master of precise, challenging and highly technical drumming, he’s one of those rare tub-thumpers that it’s hard to take your eyes off. Having lobbied for the inclusion in the set of Fall of Sipledome, the Thunberg-friendly global warming song from 1999’s The Gathering album, he proceeds to pummel his way through its complex rhythms like an absolute fucking machine. Extraordinary. 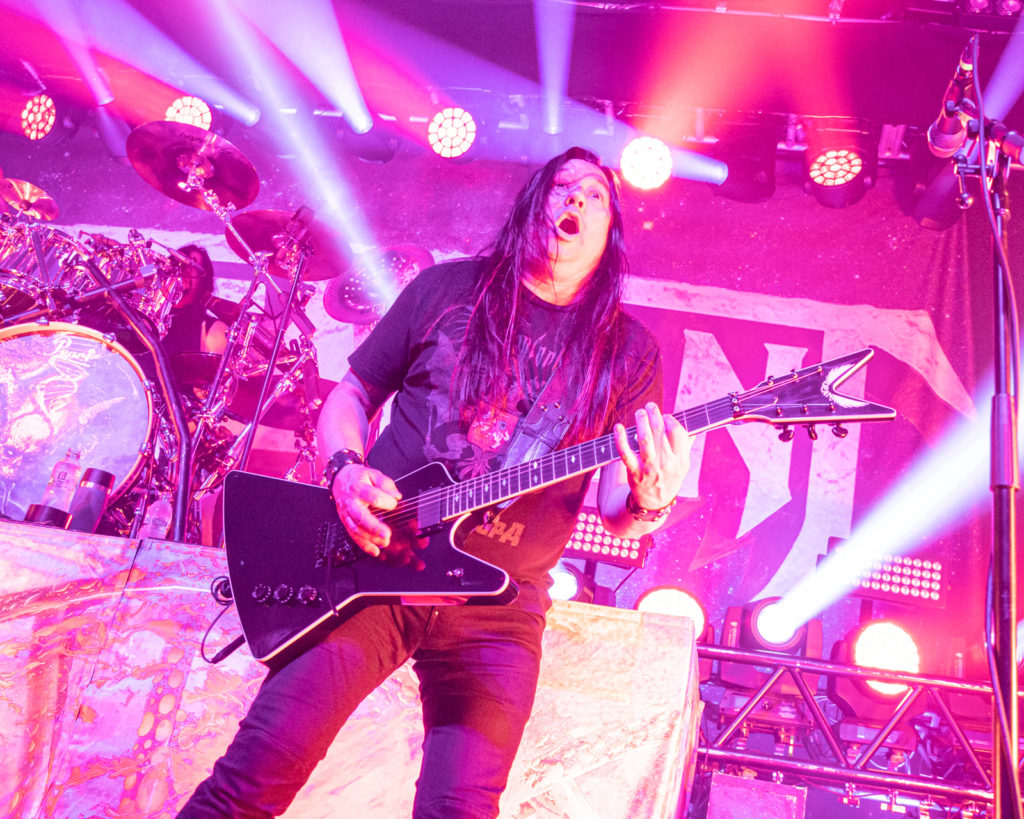 With two such great musicians on stage, it’d be too easy to overlook the other members of the band. But co-founder Eric Peterson would be an asset to any metal act and seems to be increasingly taking lead breaks as well as playing rhythm guitar, while fretless bassist Steve Di Giorgio has a wider musical hinterland than many metallers, taking in fusion and folk, and is audible throughout in a genre not widely credited for treating its bass players with such respect (Exhibit A: Metallica’s …And Justice for All). 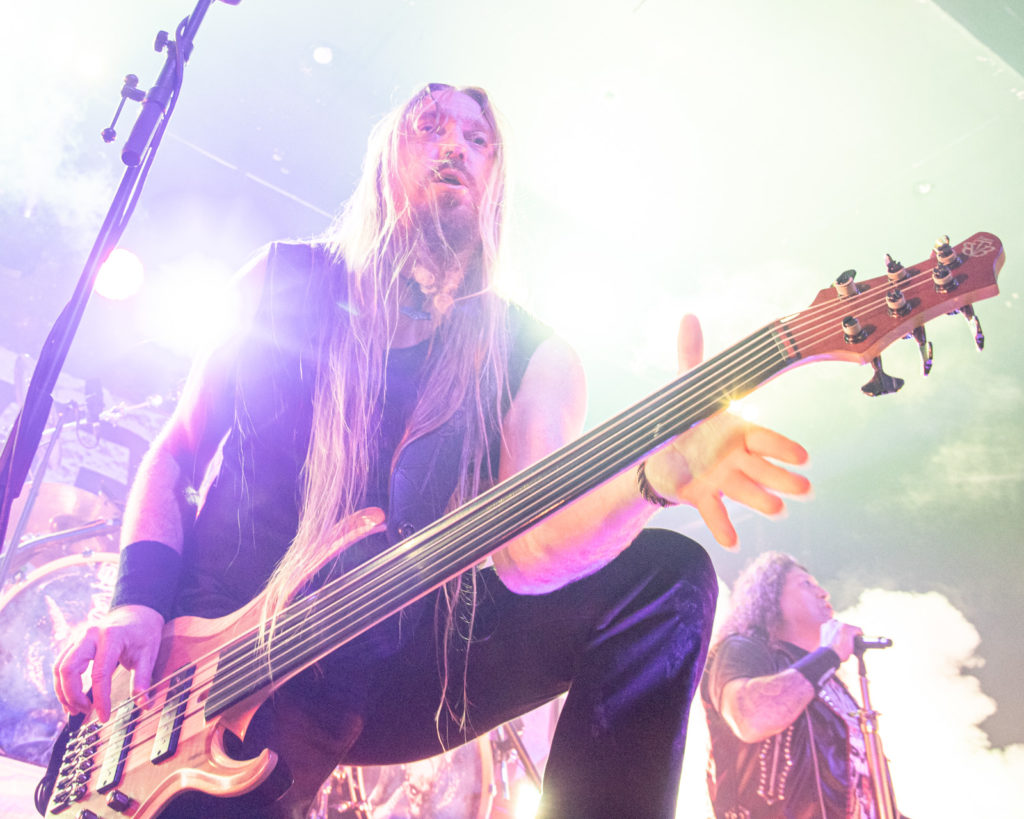 As usual, powerful Native American vocalist Chuck Billy fills in the instrumental gaps by playing air guitar on his microphone. Amusingly, from a distance this looks as though he’s strumming along on an imaginary ukulele. 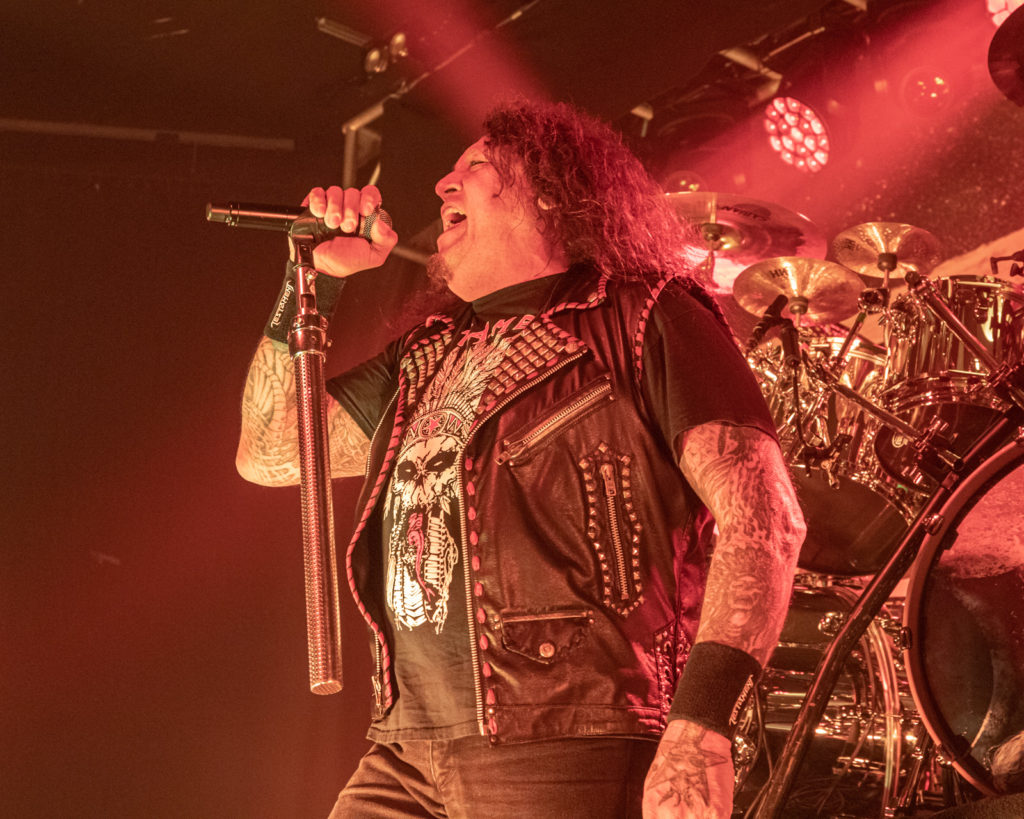 Set-wise, Testament draw heavily on 1988’s The New Order for plenty of those old-school crowd pleasers (The Preacher, Into the Pit, etc). But it’s significant that their best songs come from more recent albums, notably the magnificent title track from Dark Roots of Earth, underlining the fact that this is no legacy act flogging the old stuff to death.

“Be safe, man,” says Billy as he soaks up applause from the packed, sweaty and exhausted throng at the end of the show. “And stay away from that fucking virus…”