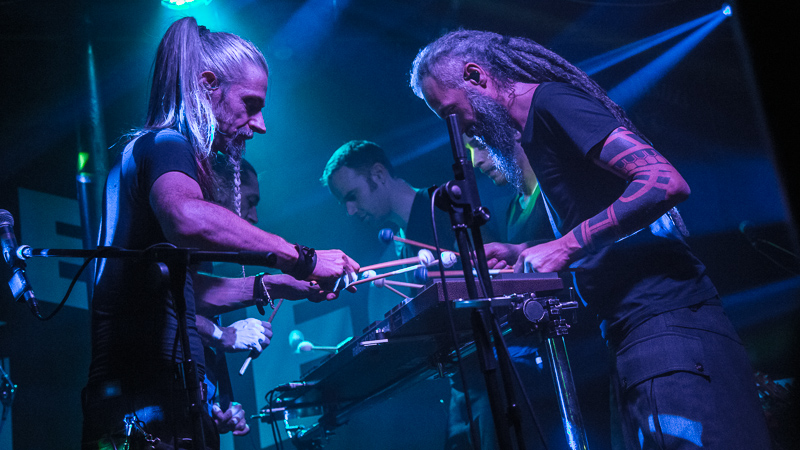 “Thank you so much for coming to see us,” says Dominique Leonetti in his hesitant, heavily accented English. “Our deepest wish is that there is no breakfast…”

Huh? It takes a few seconds to work out that his disdain is directed towards Brexit rather than a blameless cereal-based petit dejeuner. Everybody cheers. No leavers in the room tonight. The French quintet are not your typical proggers, if indeed there is such a thing as a ‘typical progger’. For a start, they’re not afraid to address contentious political issues head-on. Last time they headlined a show in Bristol, not long after the Brexit vote, Dominique was railing against the rise of the far-right in his country. Tonight’s set is dominated by new album Saison 8. Even your correspondent’s rudimentary O level French is sufficient to detect the anger in some of these songs – notably Les Côtes, which addresses the issue of desperate migrants dying on Mediterranean beaches.

Strongly held though these opinions may be, Lazuli resist any temptation to soapbox on stage. They could be forgiven for being downhearted at the challenge of achieving a breakthrough in this country against the odds (y’know – singing exclusively in French, releasing their albums independently, touring without any PR support), but there’s no sign of it tonight as they treat the faithful to an epic two-hour set. And if anything is guaranteed to lift our spirits on a miserable Wednesday evening in Bristol, it’s the sheer joyfulness of the Marillion-esque Le Lierre.

The new songs can best be described as even more Lazuli-esque, which is to say that they develop further those most distinctive components of the band’s sound – notably the French horn parped by keyboard player Romain Thorel and, especially, the léode played by Dominique’s brother Claude. That’s the instrument he designed himself after losing the use of much of his left hand in a motorcycle accident. Although this distinctive instrument appears to be malfunctioning a bit tonight, he still manages to wrangle an extraordinary range of tones, from a Middle Eastern wail to Theremin-style eeriness and an analog of the lap steel that David Gilmour plays on One of These Days. It all comes together brilliantly when French horn and léode soar in unison with Gédéric Byar’s guitar and drummer Vincent Barnavol’s danceable rhythms on such old faves as the aptly titled Les Courants Ascendants.

The gentle acoustic Les 4 Mortes Saisons, which closes Saison 8, kicks off a lengthy encore that continues with the slowburning title track from Nos âmes saoules. Each Lazuli show ends the same way, but with a twist to keep things fresh. The marimba occasionally played by Barnavol as he squeezes his way past his kit on this overcrowded stage is manhandled into position for all of them to gather round it for their splendid party piece 9 Hands Around the Marimba, which invariably concludes with an instrumental cover. Initially this is hard to place, but the audience swiftly cotton on to the Fabs’ Michelle from Rubber Soul and sing along heartily with the French lyrics.

Bidding us farewell, Dominique jokes that they may have to stay in Bristol as there’s a revolution going on back home. We all roar approvingly. Hey – how about a pre-Brexit swap? We’ll have Lazuli and the French can have Theresa May and her entire cabinet to do with what they will. Hell, we’ll even throw in Nigel Farage.