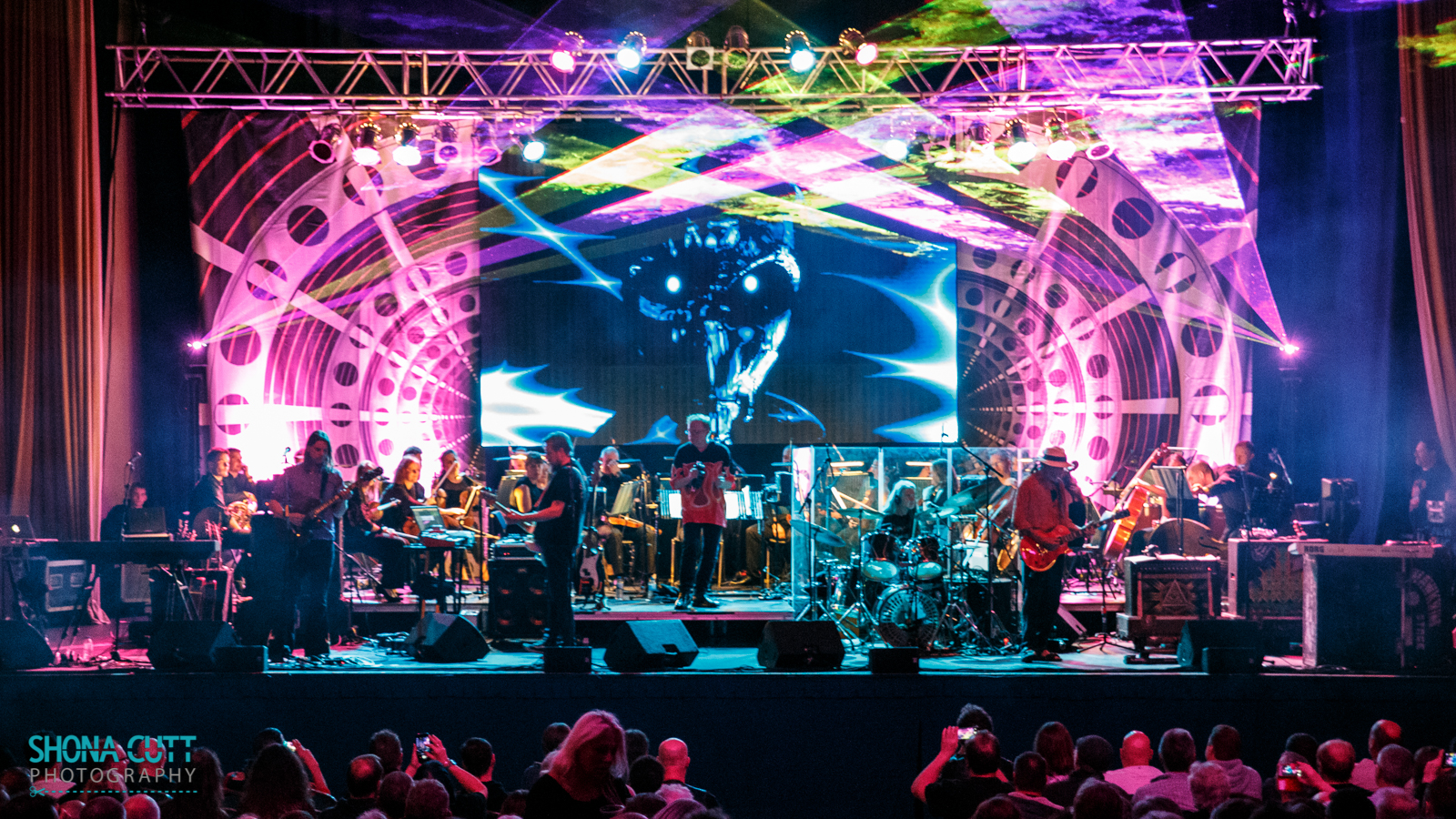 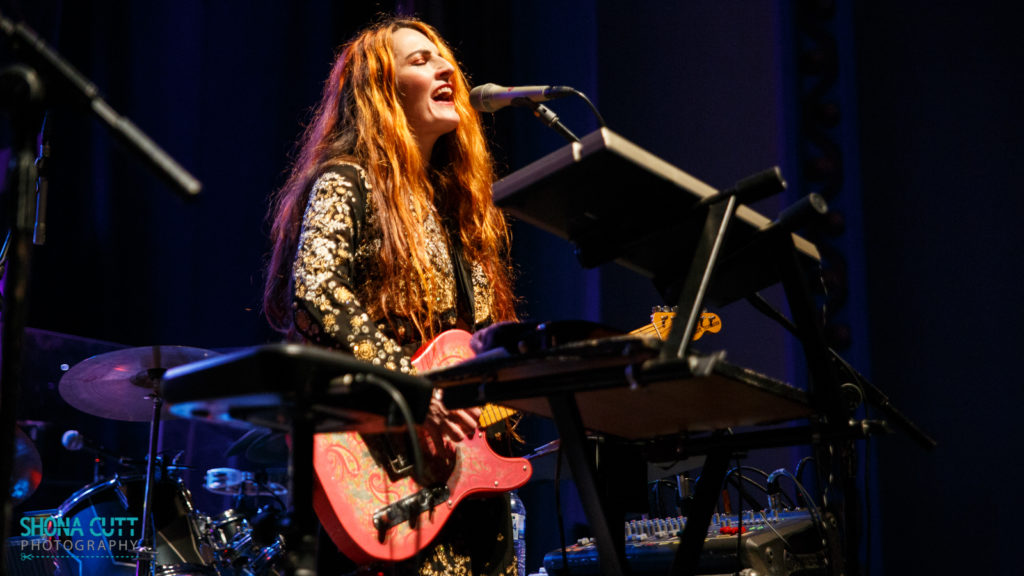 Two people is probably the bare minimum requirement for legitimately terming yourself an orchestra. Any fewer musicians and they’d be a one-(wo)man-band. But the Mancunian duo of Chrissy Mostyn and Rick Pilkington compensate by playing a lot of instruments, many of them simultaneously (notably guitar and keyboards). 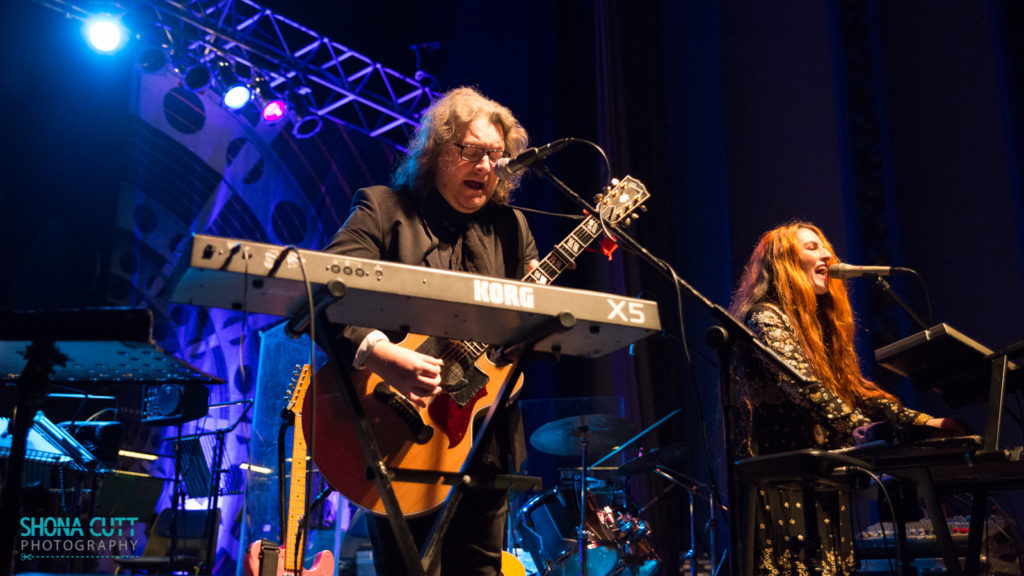 They do some interesting experimental stuff with loops, but their brand of electro-acoustic music tends towards the soporific. It’s all rather like being submerged gently in a warm aromatherapy bath. 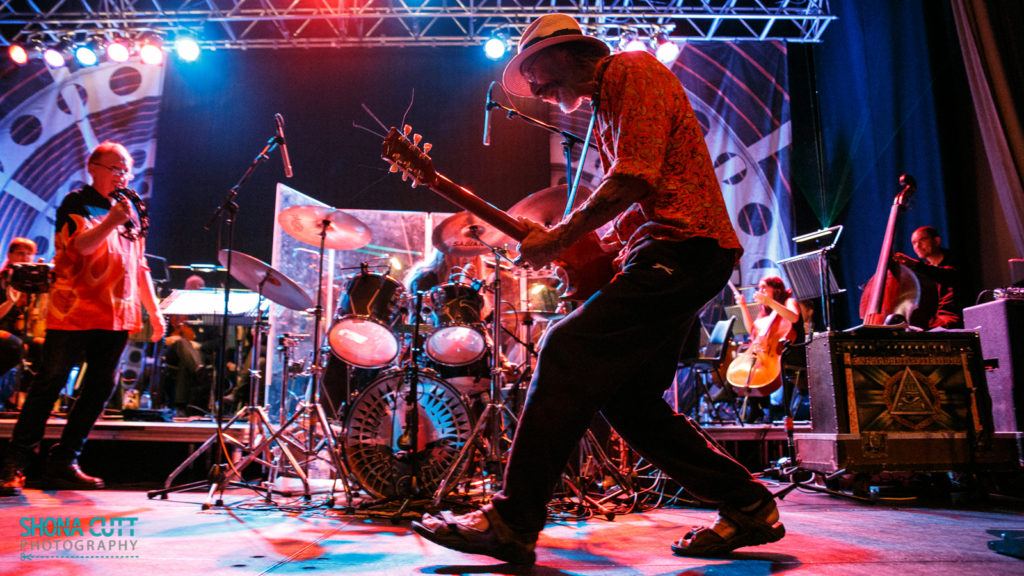 Few bands that are about to celebrate their 50th anniversary bother to take risks and challenge their audience. There’s King Crimson and, erm, I’ll get back to you about the others. With The Road to Utopia, Hawkwind took an abrupt and surprising left turn to rework (mostly) ’70s classics from their bulging back catalogue in orchestral form with arrangements by Mike Batt and a guest contribution by Dave Brock’s old mate Eric Clapton. (Should you be compiling a pop quiz, there are now two correct answers to the question: ‘Which former member of Cream has also played with Hawkwind?’) 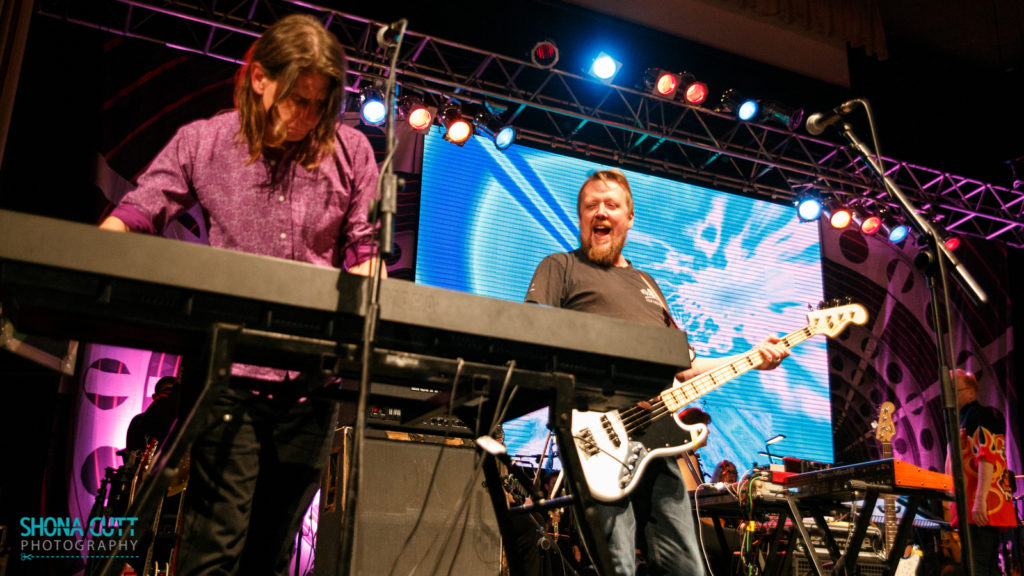 It’s fair to say that this has proven divisive among fans. But tickets flew out of the door when the veteran psychedelic warlords announced a one-off orchestral show at the London Palladium. So they decided to take the whole damn thing on the road, bravely heedless of the fact that ELP bankrupted themselves when they tried the same thing on a grander scale back in 1977. 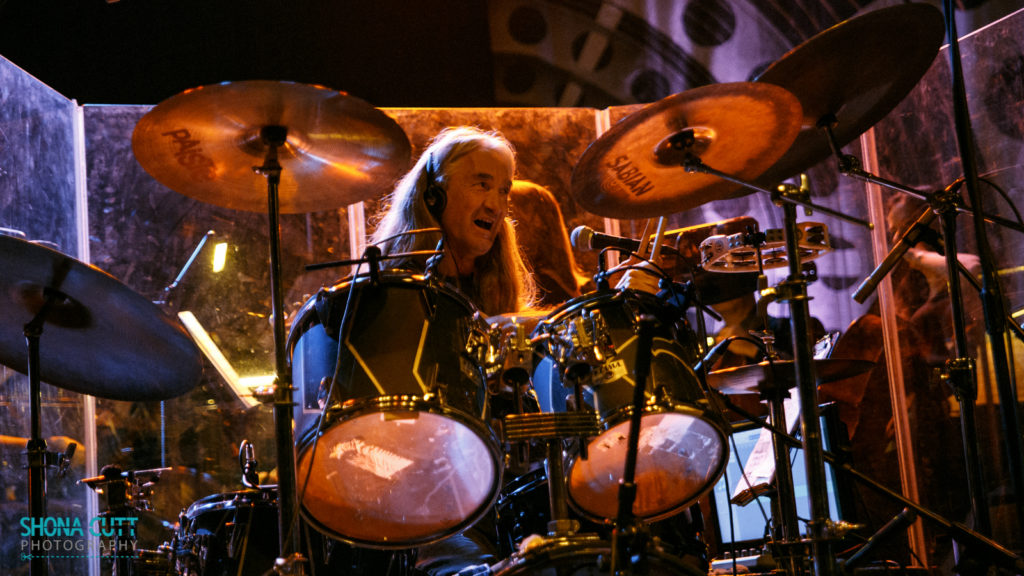 The art deco Forum’s huge stage is certainly ideal for such a performance, with the orchestra arranged in a semi-circle behind the band and Richard Chadwick’s drum kit encased in an acoustic shield, presumably to protect their sensitive lugholes. Batt joins them on their podium to assume conducting duties. A large screen above the orchestra displays the usual retina-frying images, but the pulsating stage lights are absent, as are the usual heavy clouds of fog in which the Hawks tend to lurk. Orchestral musicians need to see what they’re doing after all. But – hey – the lasers are back to strafe the audience. 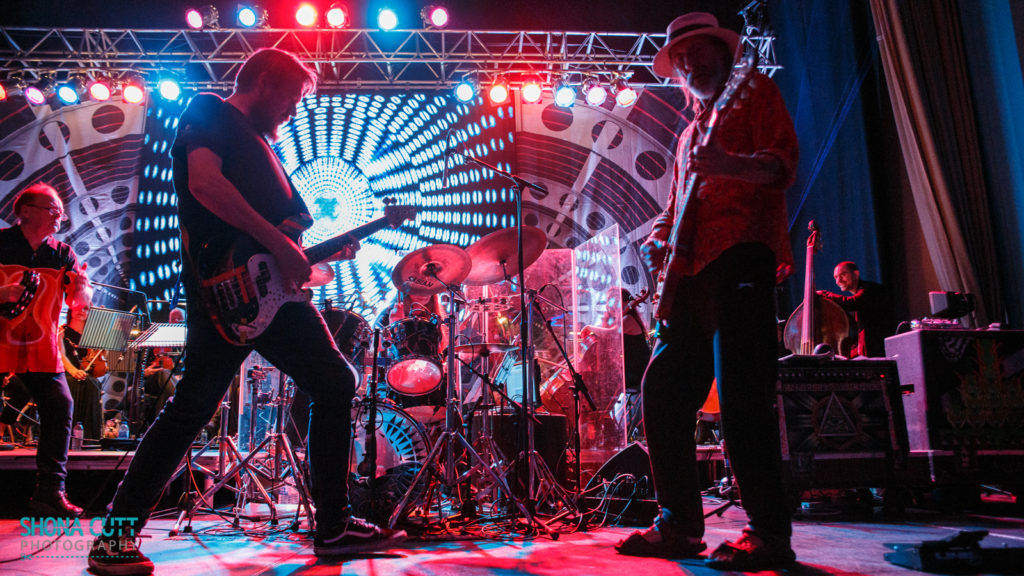 The Docklands Sinfonia troop on first and Batt leads them through a rousing intro, while the projection screen carries a tongue-in-cheek build-up to the imminent arrival on stage of . . . Hawkwind! And here they are! Hang on a minute, there’s only four of the buggers. That’s right – the latest instalment of the great Hawkwind soap opera has seen the departure of Mr. Dibbs and his inaudible cello (“irreconcilable differences”, apparently) and, more concerningly, young Haz Wheaton of this parish, whom Brock had previously credited with giving them a good kick up the arse. (Haz subsequently found a berth with evil doomsters Electric Wizard.) So back comes previous bassist Niall Hone to join Brock, Chadwick and keyboard player/guitarist/vocalist Magnus Martin. My well-informed friend Mr. Wikipedia informs me that there are now 41 former members of Hawkwind, seven of them deceased. 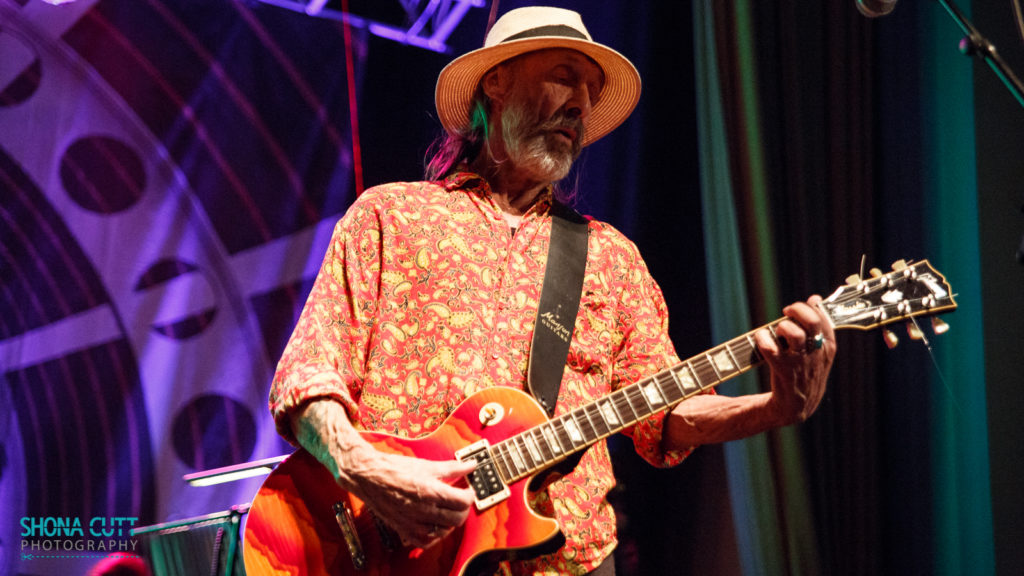 The Longfellow-quoting Assault and Battery from Warrior on the Edge of Time opens the show and it sounds fabulous, Batt’s thoughtful and unobtrusive orchestration following and augmenting the synth lines without neutering the space rock. It’s also immediately apparent that there’s a new musical discipline on display here, which we can only assume has been imposed by the baton-wielding Womblemeister to ensure perfect integration of band and orchestra. Not only is the sound crystal clear but for once we can also hear Brock and co’s banter. 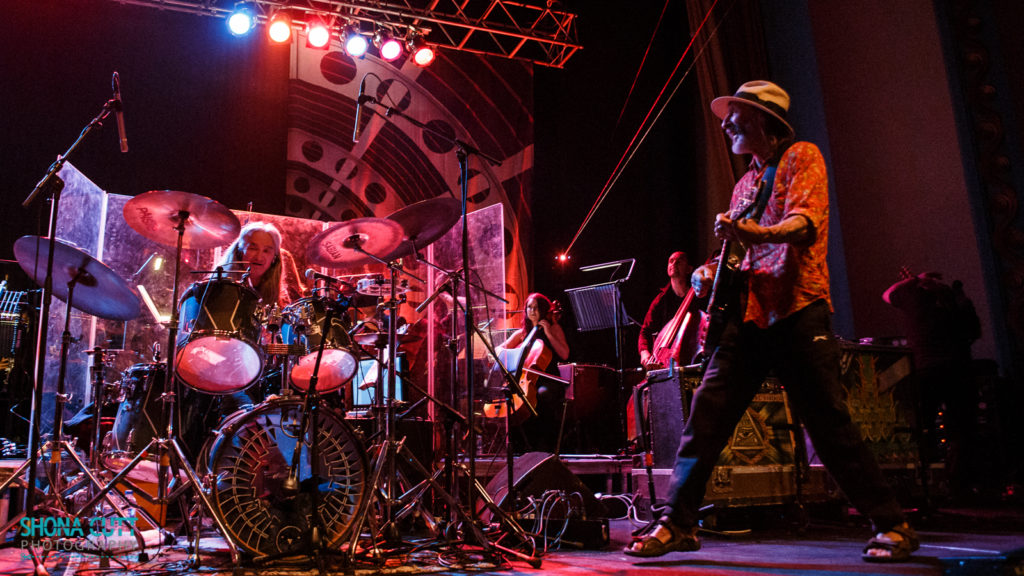 Wisely, a decision has also been taken not to have the Sinfonia play on everything. An extended jam version of the rockin’ Shot Down in the Night is performed by the reduced quartet alone, Batt joining in on tambourine with the wild abandon of a man who’s enjoying a contact high merely by being in close proximity to the Hawks. 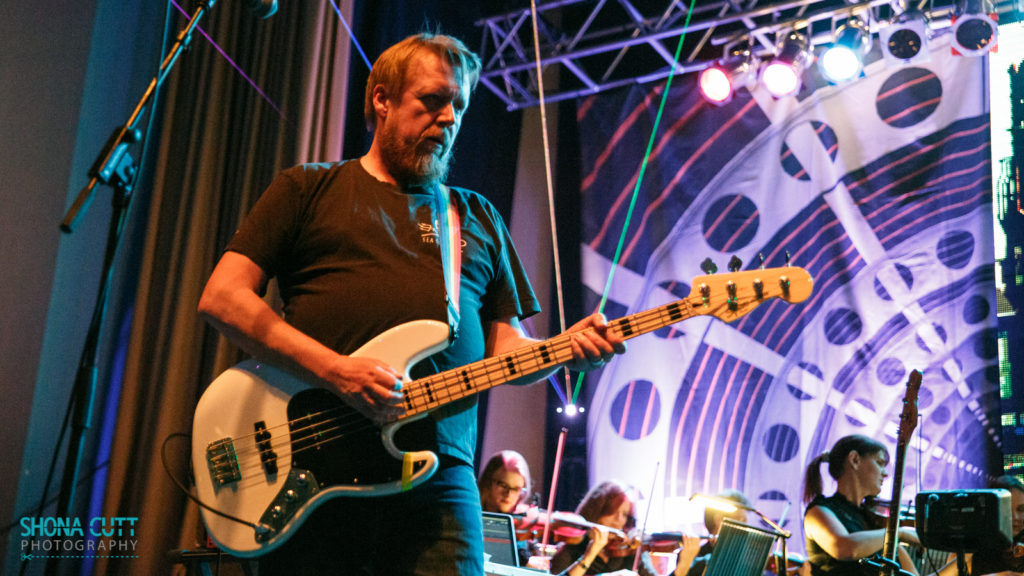 Brock’s We Took the Wrong Step from 1972’s In Search of Space is another song that works superbly with the Sinfonia, who draw out its mournfulness while the projection screen repositions the lyrics as being specifically about climate change. The orchestra also has great fun getting discordant on our asses with Sonic Attack, while making Zarozinia from The Chronicle of the Black Sword  sound even more lovely. No Quark, Strangeness and Charm, though, which may be significant as this is the arrangement on The Road to Utopia that seems to have attracted the most criticism. 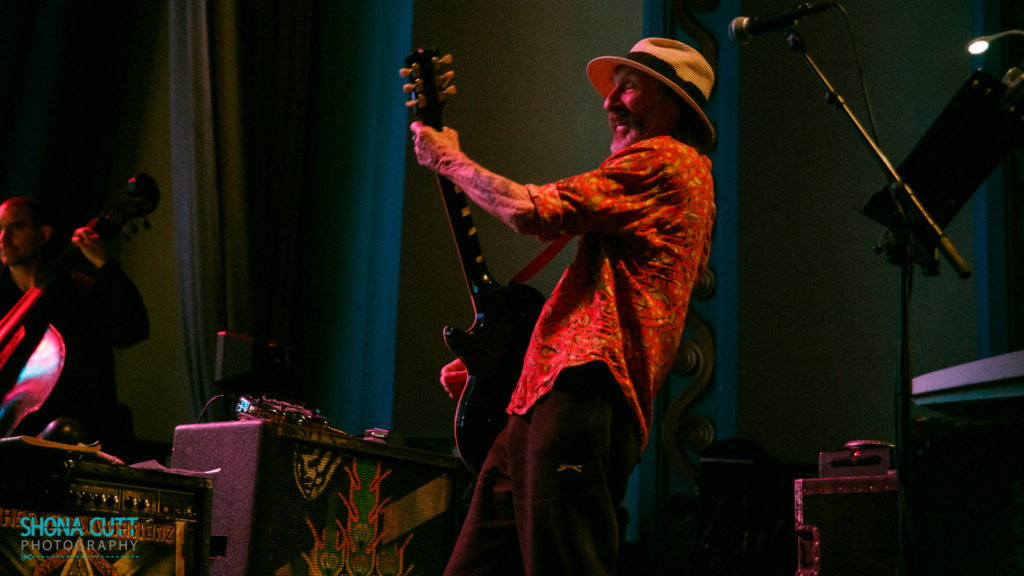 Now celebrating his 30th year in the band, putting him just behind 77-year-old Brock, Bath homeboy Richard Chadwick remains the Hawkwind engine room, giving it some serious motorik during Born to Go from Space Ritual and contributing lead vocals to a couple of songs. But while Brock himself is on fine form, his distinctive vocals high in the mix and the stage set-up not permitting him to hide away behind a bank of keyboards as he is wont to do (though someone really ought to turn up his guitar), it’s multi-instrumentalist Magnus Martin who’s stepped up to do much of the musical heavy lifting. “They’re not allowing you to dance tonight, then,” he remarks, eyeing the security staff who’ve been ushering groovers back to their seats, as they did at the Saxon show a couple of weeks back. It takes a little longer tonight, but once again law’n’order breaks down at the Forum as the hippy surge becomes an unstoppable torrent. 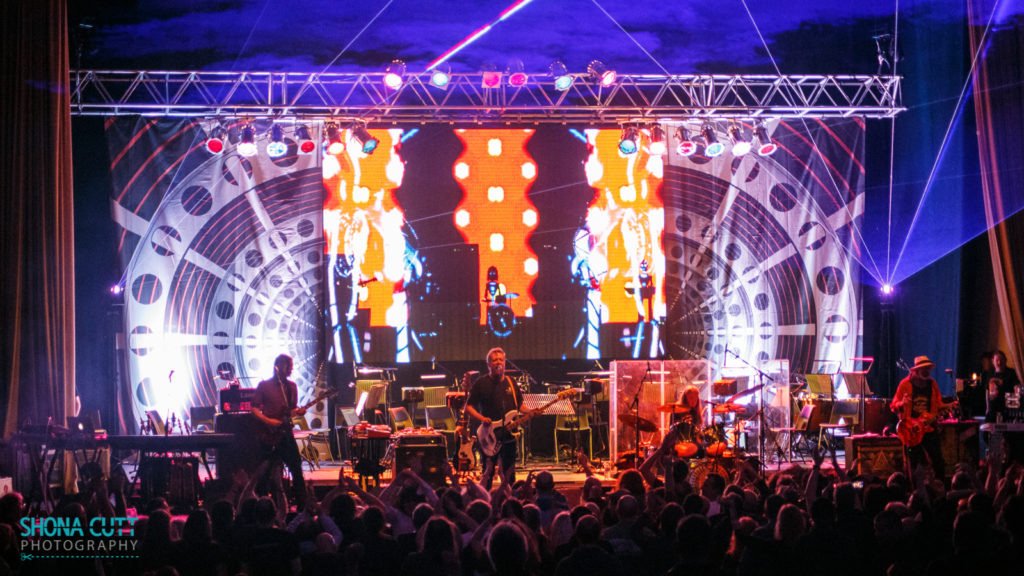 No Arthur Brown tonight, though, which was a bit of a shame as he’s popped up to go suitably Crazy at other shows. Maybe the building’s owners, Bath City Church, balked at having the septuagenarian God of Hellfire on the premises (“I’m afraid we’ve heard your hit, Mr. Brown.”) No matter, the Hawks are back without the Sinfonia for a singalong encore of Robert Calvert’s great Spirit of the Age, with Brock on vocals, followed by the inevitable Silver Machine. This was probably a never-to-be-repeated one-off, but it worked much better in a live context than we had any right to expect. It’ll be fascinating to see where Cap’n Brock steers the mothership next and whether he takes any lessons with him.