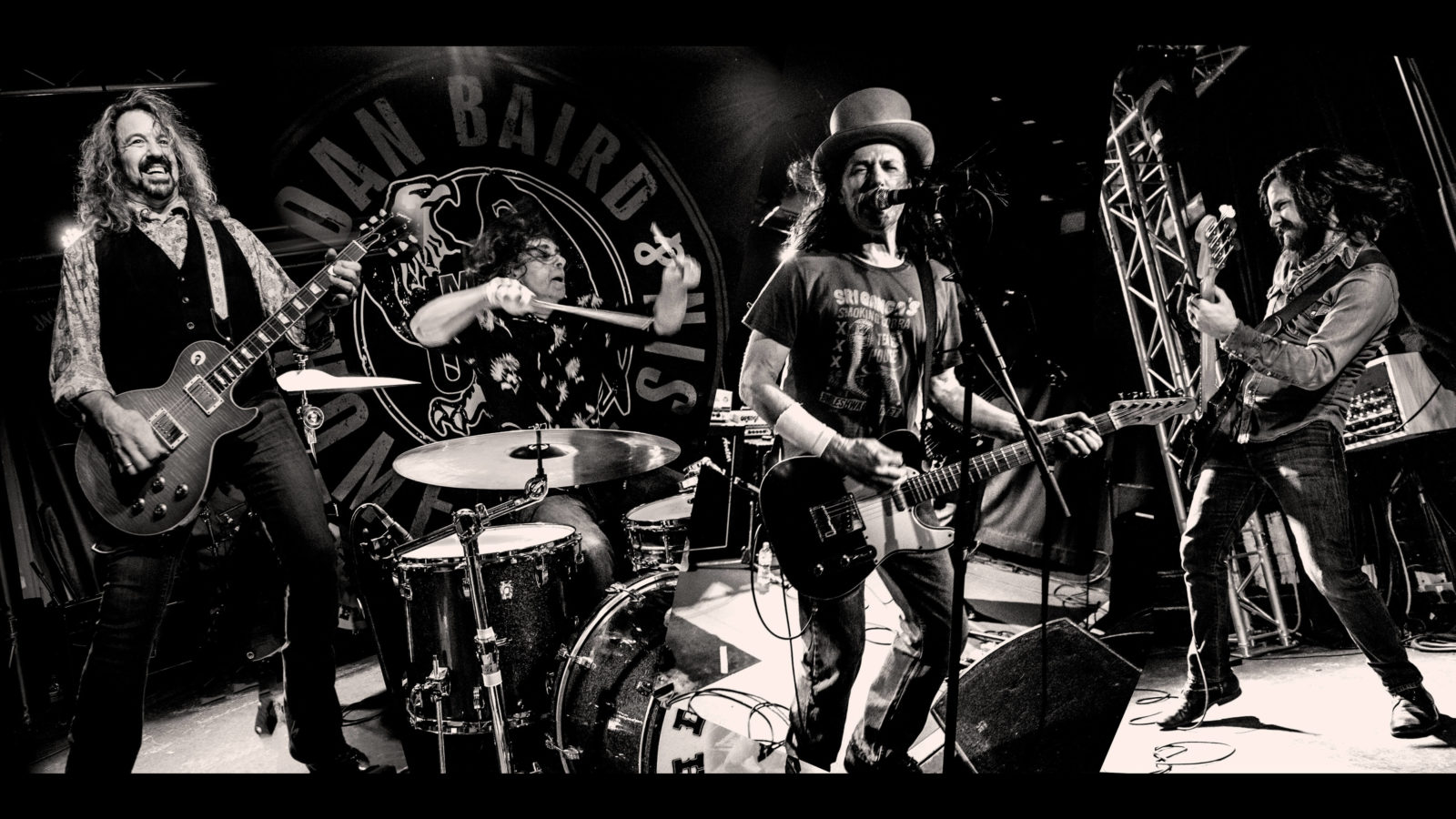 OK, so you’ve probably already blown your rockin’ budget on Rammstein tickets (Principality Stadium, June 14, 2020 – their biggest ever UK show), but do bear in mind that those Autumn gigs are already starting to sell out, from Rival Sons at the Academy to Jinjer at the Exchange (now apparently upgraded to the Thekla). Oh, and Gloryhammer’s entire UK tour is on the verge of selling out. Who’d have thought that power metal at its daftest would prove to be so popular? Meanwhile, there’s much to enjoy in September…

Let’s party like it’s 1983 with the return of all-female NWOBHM trio Rock Goddess, who got back together in 2013 and still feature sisters Jody and Julie Turner (who were 13 and nine-years-old respectively when they founded the band in 1977). Anyone else out there remember seeing them on that bizarre all-woman punk bill with the Androids of Mu at the (old, pre-makeover) Trinity back in the early ’80s? If memory serves, it all ended in a massive ruck between rival punk armies. They’ve had a tough year, what with Jody being hospitalised back in March, causing the cancellation of the first run of dates; and the Pledge music fiasco, which lost them thousands of quid. But latest album This Time is out on old-school vinyl imminently and this will be our first opportunity to see them with new bassist Jenny Lane. Support comes from revived Glaswegian rockers Heavy Pettin’ (another decidedly ’80s band name). Tight of trouser and poodlesome of perm, they signed a big bucks deal with Polydor back in 1982. Debut album Lettin’ Loose, produced by Mack (of ELO and Queen fame), was a really rather fine example of early ’80s hard rock – even if it wasn’t exactly overburdened with originality. But the band fell victim to record company politics and were eventually reduced to entering the Eurovision Song Contest with the truly appalling Romeo. If you remember them, you’ll be delighted to learn that they’re still fronted by Hamie, whose voice, Kerrang! noted memorably, “had a habit of rising alarmingly at the end of every line like somebody had just pulled his zip up a bit too quickly”.

Here’s a real treat for southern rock enthusiasts: three great bands teaming up for a big-value package tour. They’ll each play an hour-long set, taking it in turns to headline, so we’ve no idea who’ll be coming on last in Bristol. Former Georgia Satellite Dan Baird is a regular visitor to the city, having played memorable shows at Beese’s Tea Gardens (once during a raging torrent) and, most recently, the Thunderbolt. A terrific live act, Homemade Sin feature the great Warner Hodges on guitar and Mauro Magellan (formerly of proggers Starcastle) on drums. Hodges will be doing double duties with one of his other bands, Nashville’s Jason and the Scorchers, who were once described as “the greatest rock’n’roll band in the world” by no less an authority than The Guardian. If the Grammy winning Kentucky Headhunters from, erm, Edmonton, Kentucky, look like a bunch of southern rock dads, that’s because they are. Specifically, rhythm guitarist Richard Young is the father of Black Stone Cherry drummer John Fred Young. (Check out our interview with BSC bassist Jon Lawhon for an amusing yarn about how he took on the smalltown jocks in the 1970s.) They started out way back in 1968 under the rather unfortunate name of Itchy Brother, but didn’t play the UK until 2016 because of Young’s crippling fear of flying – hence the Headhunters’ rather low profile over here.

Did somebody say free gig? Yes this splendid “fuzzy Sunday night” of sonic headfuckery courtesy of Wizzarding Promotions will put no strain on your wallet. Headliners The Contact High do the psychedelia/Krautrock thing with plenty of loops. Support comes from catchy Bristol psychedelicists Riveracid.

Back in Bristol for the first time since 2016, ace shredder Paul Gilbert isn’t quite in the Joe Satriani/Steve Vai punter-pulling league, but he does have a gimmick all of his own: playing guitar with a cordless drill. You may recall him demonstrating this skill with re-formed supergroup Mr. Big at the Academy back in 2011. Industrious fella that he is, he’s also found time to whack out 15 solo albums since 1998, the latest of which is entitled Behold Electric Guitar (out now on Mascot Records). It’s a typically eclectic collection, taking in rock, blues, jazz and pop, whose “ear-worm melodies, balanced with fret-scorching fireworks” earned an 8/10 review in Classic Rock. Expect to find every guitarist in town down the front scraping their jaws off the floor.

Fuzzy heavy rockers from Boulder, Colorado, The Velveteers boast the unusual configuration of one guitarist/vocalist (Demi Demitro) and two drummers. Sounds good to us, though – especially as they’ve been known to cover T. Rex’s Lean Woman Blues.

In the UK for the European Space Agency’s latest Space Rocks event with Tim Peake and chums at the O2 in London (alongside Anathema and Amplifier), impressive Perth prog-metallers Voyager are among the leaders of Australia’s remarkably fruitful progressive rock scene. Like fellow countrymen Caligula’s Horse, however, their profile is much lower in the UK – hence this show at The Lanes. Their sixth album Ghost Mile saw them giving free rein to their poppier sensibilities while retaining the tech-metal edge that should appeal to fans of Periphery and TesseracT. The seventh one, Colours in the Sun, is out on Season of Mist in November.

You know the story, right? Mexican metalheads wind up busking in Dublin, become huge stars thanks to YouTube and – impressively – never abandon their metal roots. Indeed, you describe them as a ‘flamenco’, ‘folk’, ‘Latin’, ‘jazz’ or ‘World Music’ act at your peril, as they reject all of these labels. The only description they’re comfortable with is Rock. Rodrigo Sanchez handles the melodies, while Gabriela Quintero contributes those extraordinary percussive sounds. The thrash metal influence is obvious, with the likes of Metallica (has anyone done a better cover of Orion?), Testament, Exodus and Overkill being key touchstones. But their fifth album,  Mettavolution, is dominated by a Pink Floyd cover. Not just any Floyd cover, but all 19 glorious minutes of Echoes, which features some of the PETA-supporting vegan duo’s most delicate playing to date.

San Diego instrumentalists Chon’s warm, upbeat, occasionally jazzy and invariably melodic brand of math-rock has one foot planted firmly in progressive rock/metal. Former touring partners of Animals As Leaders and Periphery, they’re an absolute treat for anyone who believes that you can never have too many notes. Their third album, titled simply Chon, is out now on Sumerian Records.

Isn’t there something a little odd about this line-up? Headlining Danish rockers Volbeat do the metal/rockabilly thing, which seems like something of an odd fit with the superlative modern prog-metal of Baroness – who are surely the main attraction here. Of course, the last time they played Bristol (Fleece, August 2012), the band suffered that near-fatal bus crash just outside Bath. Frontman/guitarist/album cover art painter John Baizley is the only musician from that gig who remains in the band, but their fourth and fifth chromatically-themed albums (Purple and Gold & Grey) have continued to refine the band’s distinctive sound, perhaps surprisingly earning near-universal critical acclaim. “Their travails have produced an epic, ambitious collection that is beautifully beatific, purifying and uplifting,” remarked The Guardian‘s review of Gold & Grey. Get there early for perennial opening act Danko Jones, who are always great fun. The only rock guitarist with his own Huffington Post column (check out The Day I Met Johnny Cash (and sold him a Nirvana record)), opinionated Canadian Jones is a polymath in the Henry Rollins/Scott Ian mould, equally happy with rockin’ out and spoken word/’lecture’ tours.

The idea of two Wishbone Ashes on the touring circuit puts one in mind of Lemmy’s remark about rival Hawkwind factions taking each other to court – or, if you want to be wanky about it, Jorge Luis Borges on the Falklands war: it’s like two bald men fighting over a comb. Actually, however, the two Ashes offer different experiences. The official version led by guitarist Andy Powell (number of original members: one) has continued to record and perform new material of varying quality, including some bizarre and now mercifully forgotten diversions into dance music. Bassist Martin Turner’s Wishbone Ash (number of original members: one) – currently known for legal reasons as Martin Turner Plays the Music of Wishbone Ash – popped up in 2004, eight years after co-founder Turner’s last tenure with the band. He offers more of a nostalgiafest and remains in pretty good voice. So if it’s the Argus classics you want to hear, this show is probably your best bet.