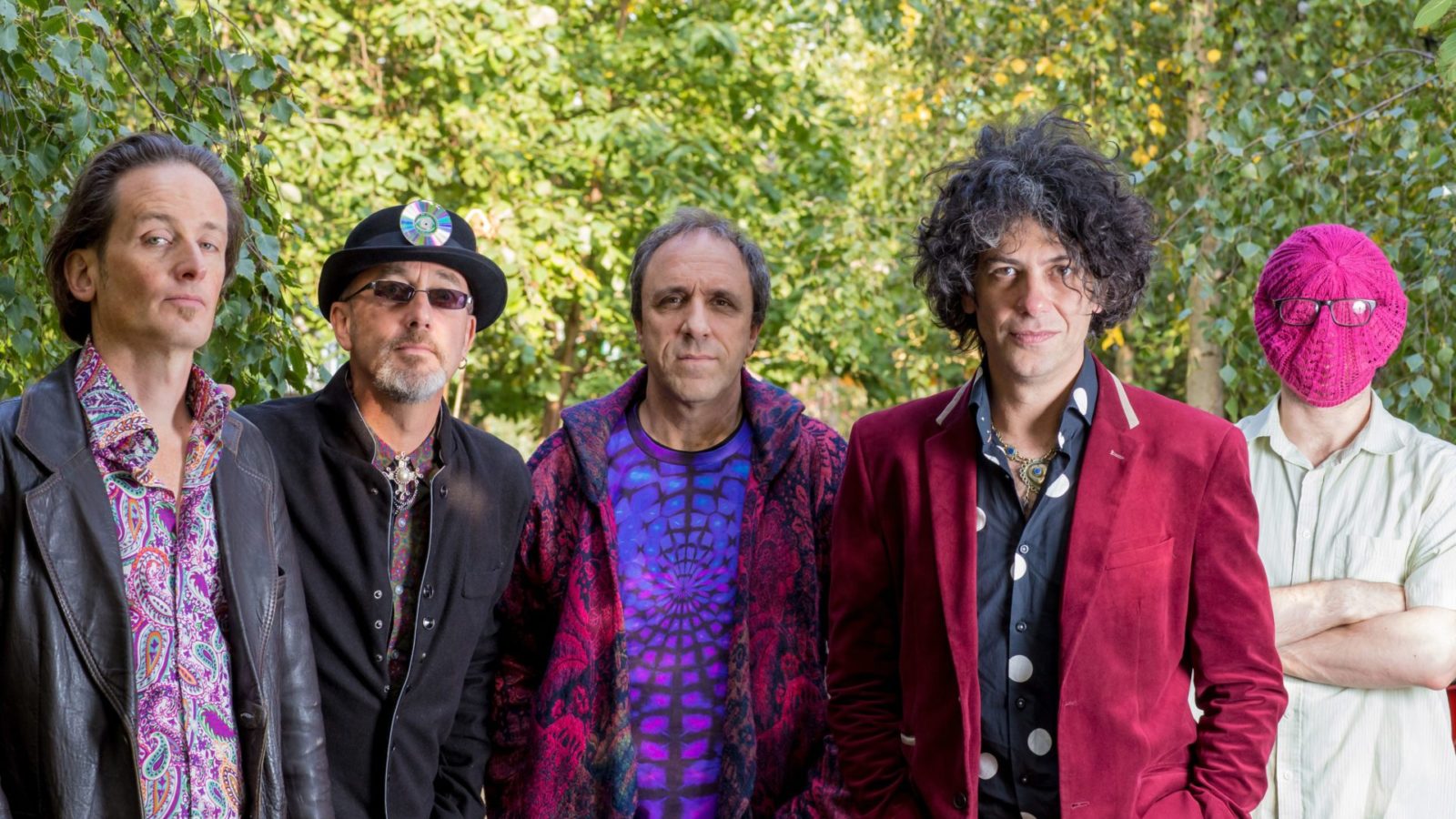 There’s no getting away from the fact that Ed Wynne sounds very much like Ozric Tentacles. This is really no surprise given that he has steered those free festival stalwarts ever since their inception way back in 1983. So why release new material under his own name? One suspects murky intra-band politics may be involved. But the bonus for us is that we get a generously proportioned support set from a musician who could comfortably fill the Thekla under his own steam if he’d chosen to tour using the Ozrics ‘brand’.

That Ozrics connection is further underlined by the presence of Ed’s son and fellow Tentacle, the splendidly named Silas Neptune, on synths, as well as those frantic, brain-frazzling projections (Fractals? Check. Kaleidoscopic imagery? Check. Stone circles? Check). His debut solo album Shimmer into Nature trades in a now-familiar blend of original ’70s hippy dance music as pioneered by Steve Hillage, turbocharged with ’90s rave influences. Ed plays just about everything himself in the studio, but what really brings this stuff to life on stage is the presence of a shit-hot rhythm section comprising actual human beings. This serves to underline his sunny, upbeat, all-instrumental music’s warmth, in stark contrast to that cold and soulless techno favoured by the pilled-up crowd.

Over the top of the layered synths and bouncy rhythms, under-appreciated Ed extemporises impressively in a variety of styles – jazz, blues, reggae, even some full-on guitar heroics. It’s fabulous, joyful stuff, no matter what he chooses to brand it.

Gong? In 2019? With no original members? Actually, as keen students of Gongology will tell you, this is hardly unprecedented. From the mid-’70s onwards, the late Pierre Moerlen led a ferociously technical percussive jazz-fusion Gong which swiftly shed its last original member. Founder Daevid Allen also seemed to delight in scattering creative seeds from the Gong mothership, leading to a multiplicity of bands playing in different styles on different continents. Before his death back in 2015, Allen anointed former Cardiacs guitarist Kavus Torabi as his successor.

This has proven to be a wise choice. Not only has Torabi won over the Gong faithful, but he’s done so in his own style, wisely declining to inherit Allen’s Pothead Pixie persona and avoiding those songs in the repertoire that were personal to Mr. Camembert. He’s also been very clear about where he wants to position this incarnation of Gong: a full-on, hard-edged psychedelic rock band putting a modern spin on the sound their predecessors pioneered with 1971’s Camembert Electrique. No space whispers, flying teapot whimsy or propeller hats here, as the Radio Gnome intro gives way to Allen’s sadly inaccurate You Can’t Kill Me – the first of three songs from that album. 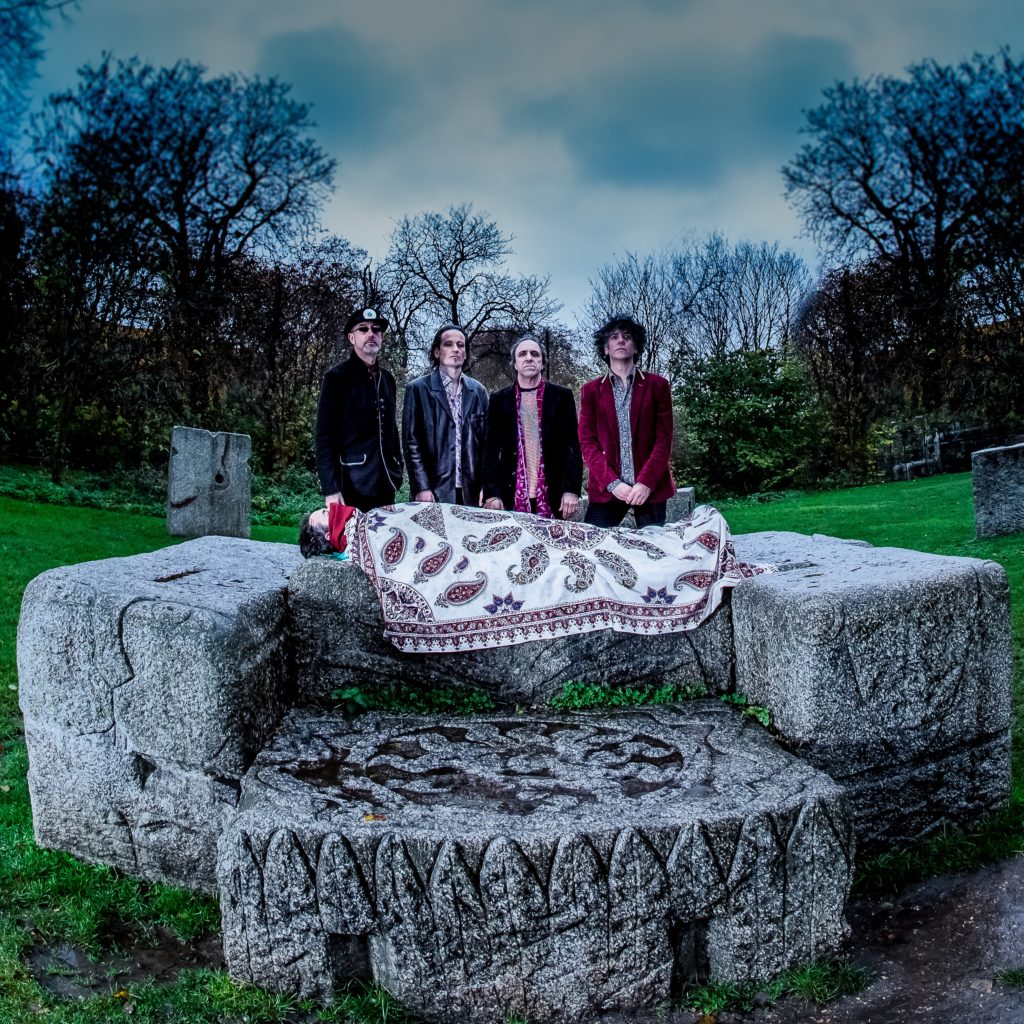 It’s also clear pretty quickly that the band are suffering debilitating technical problems on stage, which will persist all evening. Fortunately, these rarely spill out into the audience, apart from some howling feedback that more or less scuppers If Never I’m and Ever You from bold new album The Universe Also Collapses, which successfully sets out their stall after the transitional Rejoice! I’m Dead! (Funny how frequently Gong reference death, huh? Gong est Mort, Vive Gong, indeed.)

Rejoice! from Rejoice! I’m Dead! bounces along, buoyed by irresistible multi-part harmonies and the late Mr. Allen’s ecstatic embrace of his impending demise (“At last I’m free!”), accompanied, as is every song tonight, by a synchronised complementary animation. For a while it seems as though Steve Hillage’s magnificent Glorious Om Riff (aka Master Builder) has been repurposed as a slow blues until it explodes thrillingly into life, igniting a wild outbreak of hippy dancing among the packed, unexpectedly boisterous, all-ages audience. Someone has even brought a unicorn hobby horse to share (as you do), which is passed back and forth and waved about like a pothead sacrament.

The real gem among the newer material proves to be Forever Reoccurring from The Universe Also Collapses, an epic trip of a song that fully delivers on the psychedelic rock promise. There’s no sloppiness in the band’s disciplined performance, possibly helped by the fact that this is one of the last dates on Gong’s current UK tour, as bassist Dave Sturt and drummer Cheb Nettles lock in to their driving rhythms, Fabio Golfetti gives it plenty of trademark glissando guitar, and saxophonist Ian East’s jazzy honking and wailing is as distinctively Gong as that of improvising innovator Didier Malherbe on those early albums.

Sporting a wild mop of Syd Barrett 1967 hair, Torabi has little in common with his predecessor apart from a well-developed irreverence, which has helped to stamp his mark on the latest incarnation of this great institution. “What a privilege it is for us to be Gong,” he declares at the end of their exuberant two-hour set. Rejoice, indeed.