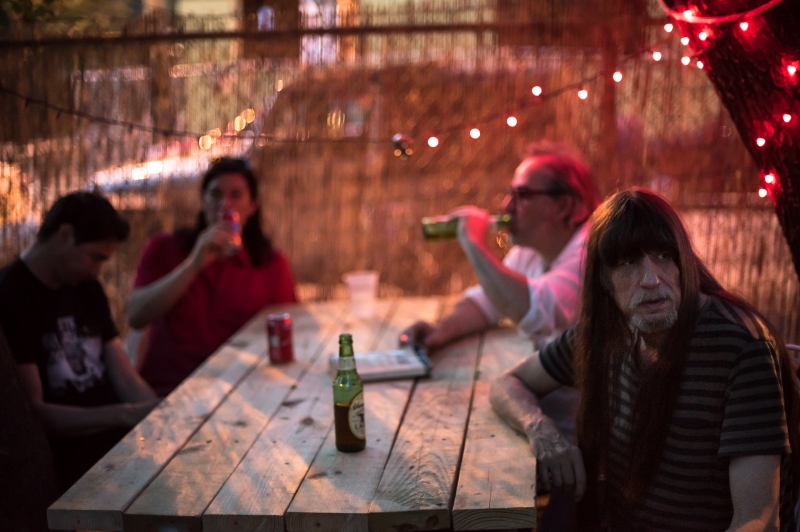 Rather like those bizarre pizza topping combos that ought to taste horrible but somehow work so perfectly that it’s amazing no one thought of them before, Endless Boogie’s marriage of Krautrock and blues-rock is more beautiful union than shotgun wedding. A quartet of gnarly New York record shop/collector dudes who evince not the slightest interest in playing the music business game, their mission is to take the boogie to modestly proportioned if wildly enthusiastic crowds of groovers around the globe. They create the impression that they’ve been doing so since the very dawn of rock (impressively fringed frontman Paul ‘Top Dollar’ Major shares an anecdote about getting Muhammad Ali’s autograph back when the legendary pugilist was still known as Cassius Clay), so it comes as something of a surprise to learn that the Boogie began as recently as 1997.

Song titles are pretty much irrelevant here, as each one follows much the same pattern, with plenty of jamming and improvisation as they meander along. Harry Druzd sets up a metronomic motorik beat supported by Marc Razo’s throbbing bass, while Major and guitarist Jesper Eklow trade licks in a frenzy of chooglin’ and blueswailing, the latter frequently opting for a wah-wah pedal workout. The music ebbs and flows with occasionally abrupt tempo changes as the audience sway along in unison, though it sometimes seems touch-and-go as to whether the Boogie will ever navigate their way to a conclusion. But there’s some real musical class in here. Many a much bigger band would sell their souls down at the crossroads for the loping guitar figure on which Vibe Killer is built.

Transplanted Kentuckian Major steps up to the microphone rarely, but when he does so it’s in one of two modes: the bourbon-soaked growl and the Tom Waits-style declamation. Most of his trademark witty autobiographical narratives entail the consumption of LSD at some juncture, one being a particularly entertaining shaggy dog story about a New York record shop and a bunch of mob-owned pinball machines back in 1978. Imagine Alice’s Restaurant recited by Captain Beefheart over music by Amon Düül or early Hawkwind (without the audio generators) and you’ll be in the right postcode. Of course, back in its pre-Cope days Krautrock was seen and marketed as a German offshoot of prog. Today there are plenty of young prog-stoners (Elder, Baroness, etc) reclaiming it from the New Wavers and techno brigade, which serves to make Endless Boogie sound oddly contemporary simply by standing still.

In theory, their epic performance could continue until global warming reduces us all to cinders. Alas, however, the endlessness of our boogie is cruelly curtailed by an early curfew to facilitate another DJ set for the Rave On Avon hordes milling around on Stokes Croft. No Kiss’n’kitefest Back in ’74 for us, then, as the Boogie caravan packs up and moves on to another city.