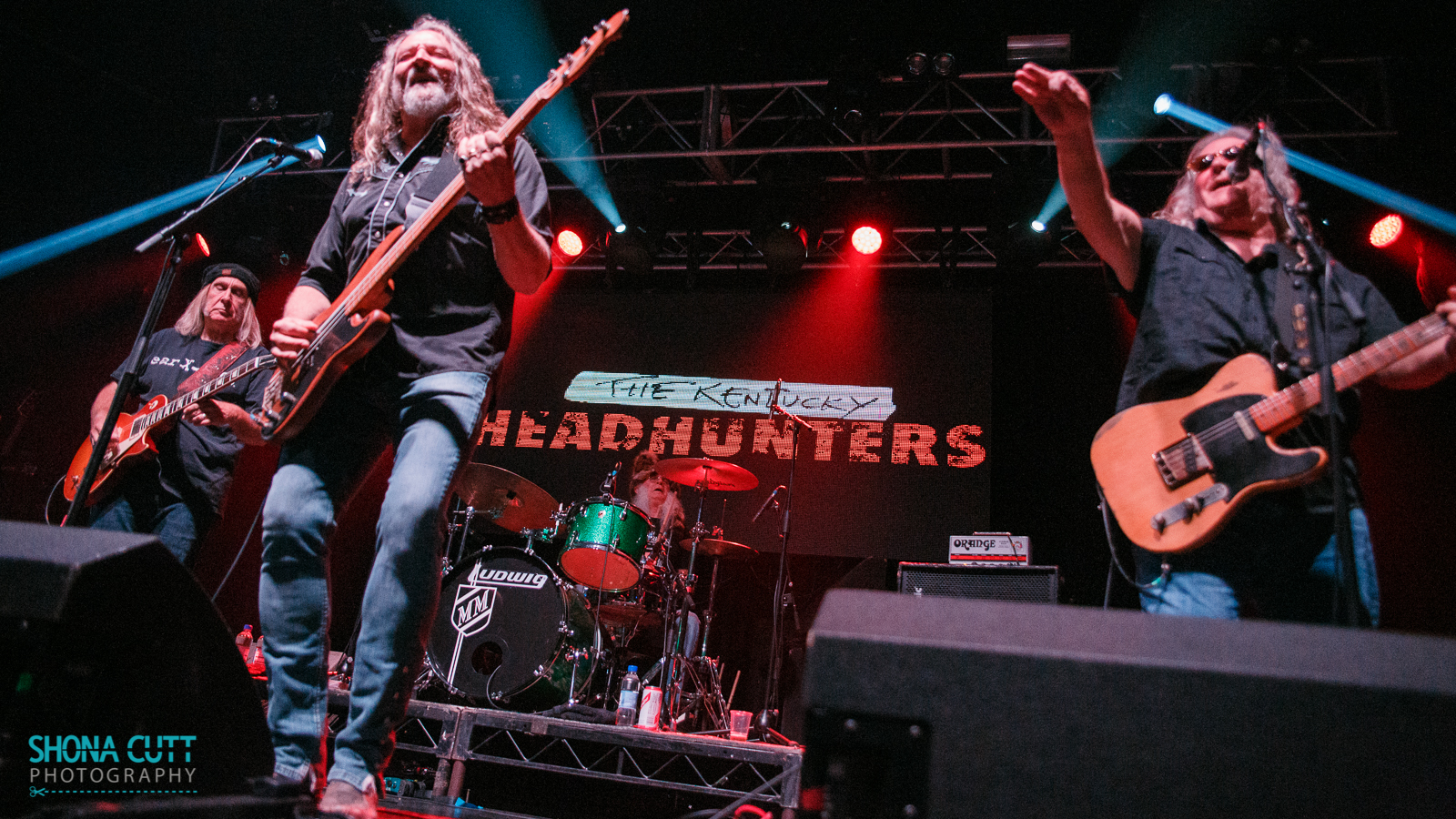 Let’s hear it for the package tour. Back in 1967, you could have seen The Jimi Hendrix Experience, Pink Floyd, The Move and The Nice on the same bill at the Colston Hall for less than a quid. What’s more, they all played two shows in one evening. Of course, if you’d been there you’d now be as old as tonight’s headliners. But still – Floyd (with Syd Barrett) and Hendrix on the same bill! It’s a fair trade-off. These things used to be all the rage, often throwing up some strange combinations (Hendrix also played the Colston with Englebert Humperdink and Cat Stevens), but we get fewer of them today.

That’s a shame, because the concept is a solid one, offering punters great value for money and permitting bands to reach new audiences. And this one’s a cracker: three acts offering what opener Dan Baird describes as different flavours of southern rock, each playing an hour-long set with a shared drum kit, great sound and no rock star egos on display. In the spirit of egalitarianism, they each take turns to headline, which proves to be a tad less wise on this occasion. 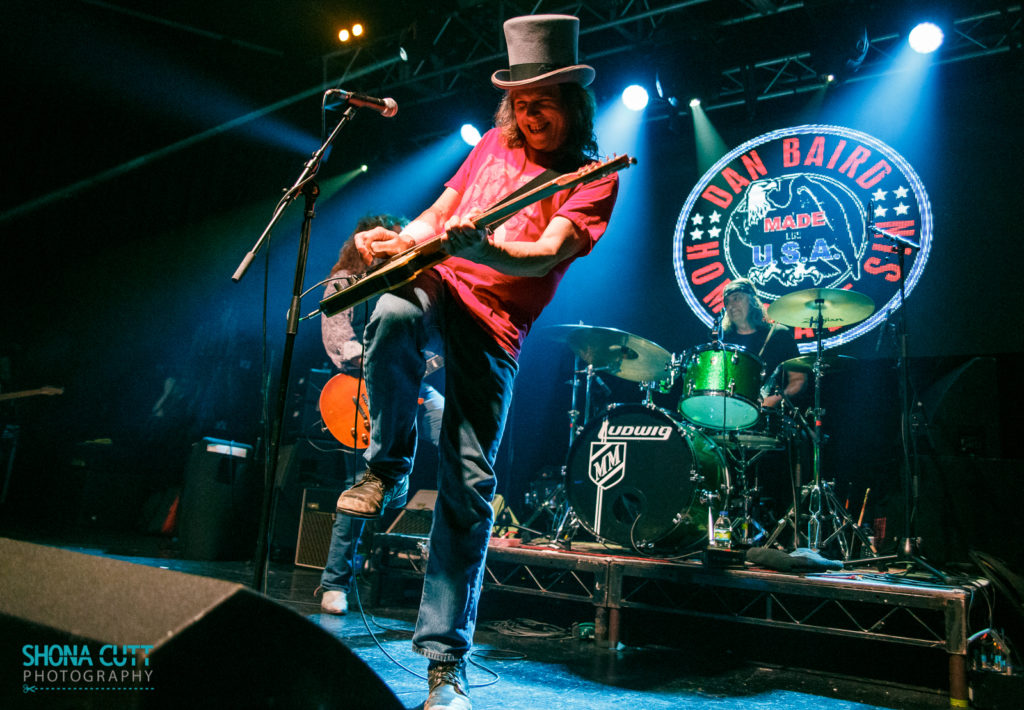 Former Georgia Satellite Dan’s up first with his current combo, Homemade Sin, playing to an initially rather sparse audience at 7pm. A frequent visitor to Bristol, his home turf is the packed and sweaty club – hence his easy way with good-natured hecklers – but his music translates well to this bigger stage, while giving him and regular sidekick Warner E. Hodges more room to move. 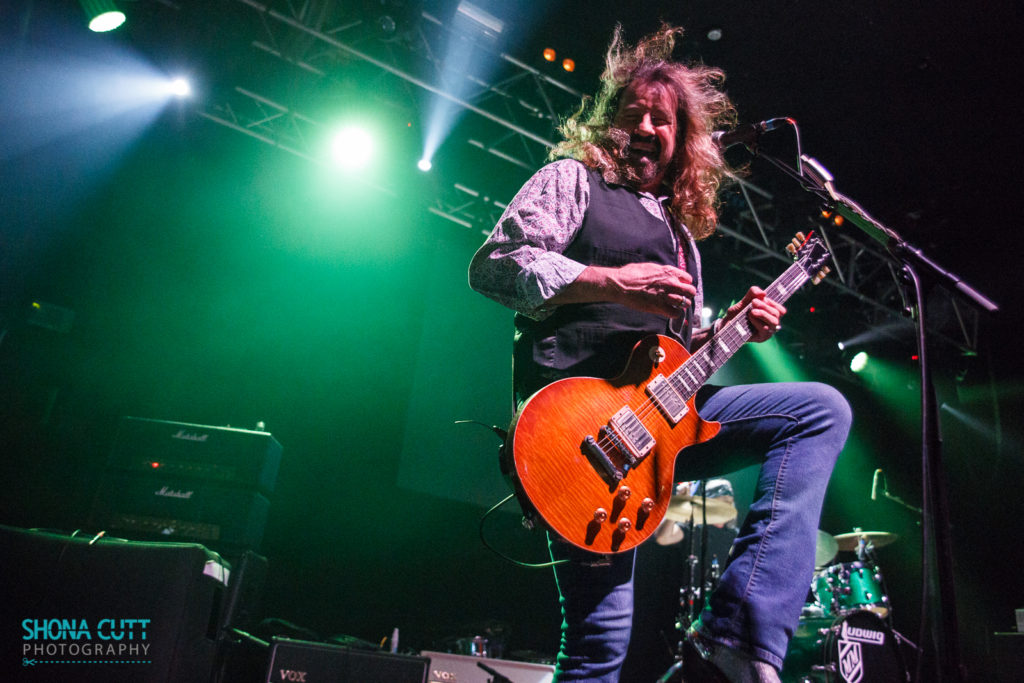 Dan’s brought his top hat and Warner has selected his spangliest cowboy boots from what one can only imagine is a closet packed with Fancy Footwear for the Southern Gentleman. But that’s yer lot for showmanship, as Nashville’s Homemade Sin are all about the rockin’. “Y’all don’t get to pick the songs,” drawls Dan as people shout requests. But no one’s complaining as they dip back to the Satellites days for All Over But the Cryin’ and, inevitably, Keep Your Hands to Yourself (“This song’s been good to me; I gotta be good to it”). Dan’s early solo career also yields the fabulously catchy I Love You Period – the greatest southern rock anthem ever written about punctuation. Period. 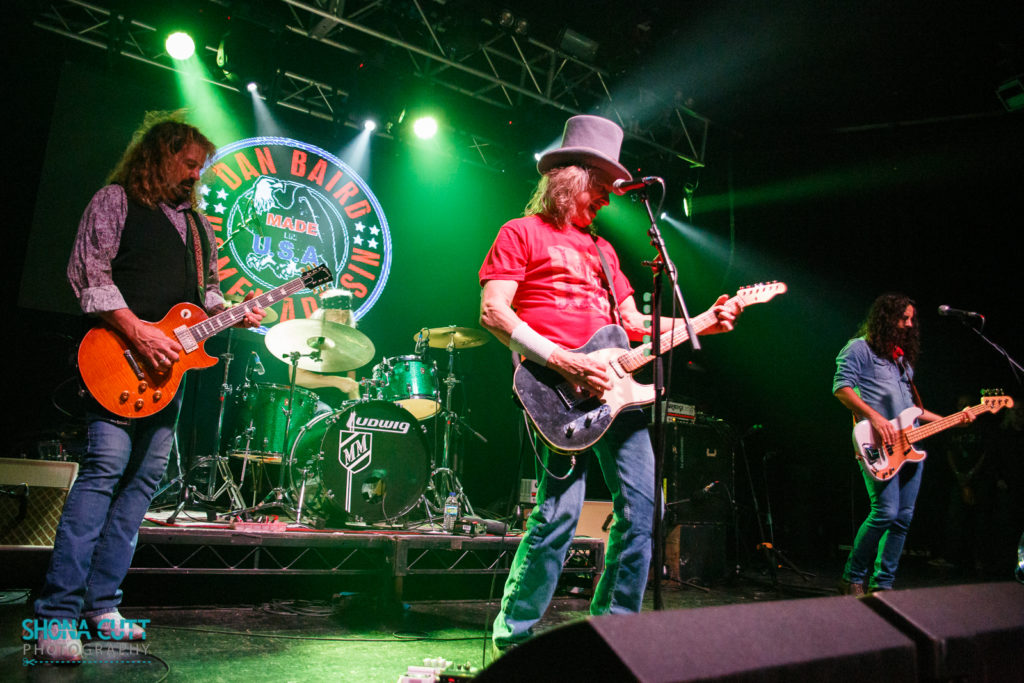 But this is no exercise in pure nostalgia. The best song by a very wide margin is Homemade Sin’s own Crooked Smile, which recalls both Neil Young and every guitar-driven southern rock epic you’ve ever heard, without sounding like a pastiche. It also affords the ever-outstanding Hodges the opportunity to serve up two (count ’em!) searing guitar solos. Very much the man of the match, he will play in a variety of styles for two hours with a brace of tonight’s three bands. 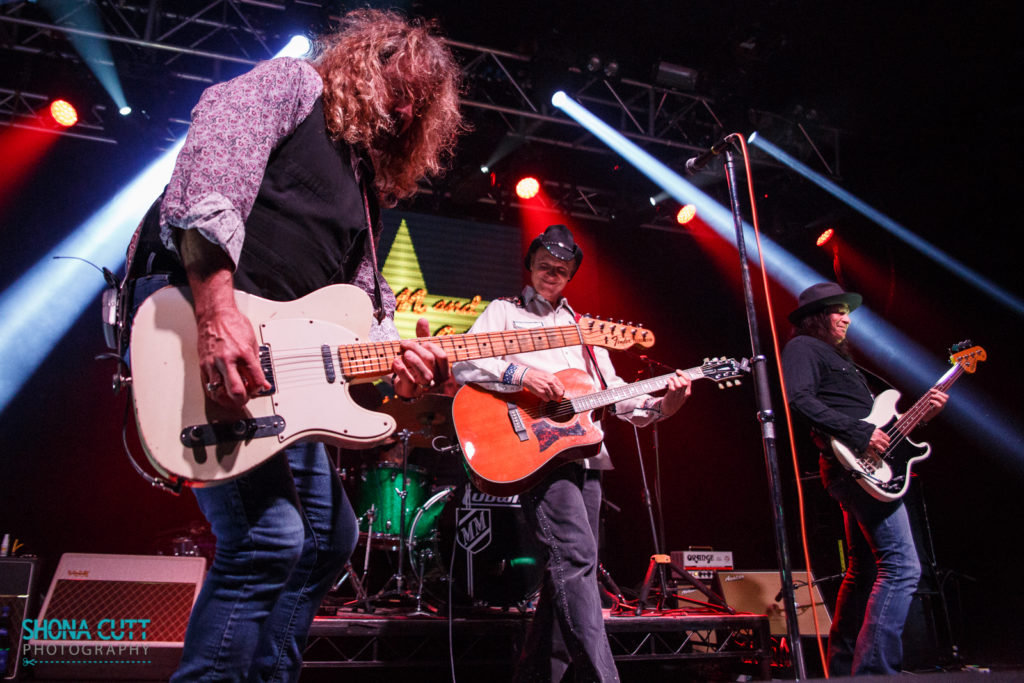 “We’re the only punk band on the bill!” announces genial Jason Ringenberg, who’s resplendent in a sparkly cowboy hat and a nattily embroidered shirt, which he’s eager to show off (“You might not always sound good, but you can always look good,” he reasons). You could tie yourself in knots trying to define and pigeonhole the Scorchers’ brand of cowpunk/alt-country/whatever, the punk element being most obvious in their shorter, sharper songs. 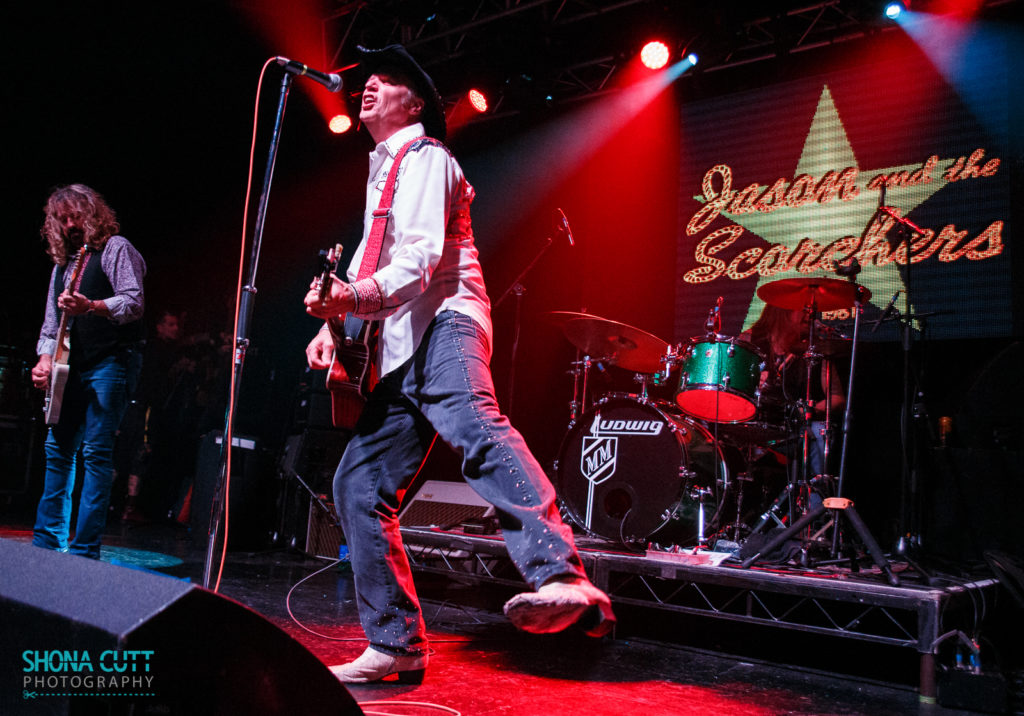 His high-energy performance undimmed by advancing years, Jason cuts a rug with relentless pogoing, herky-jerky limb-flailing dancing, and swinging of his microphone lead like a lasso, as though he’s hellbent on capturing a errant steer that has somehow wandered into the Academy by mistake. Impressively, he never goes arse-over-tit, though he does drop his mic at one point. 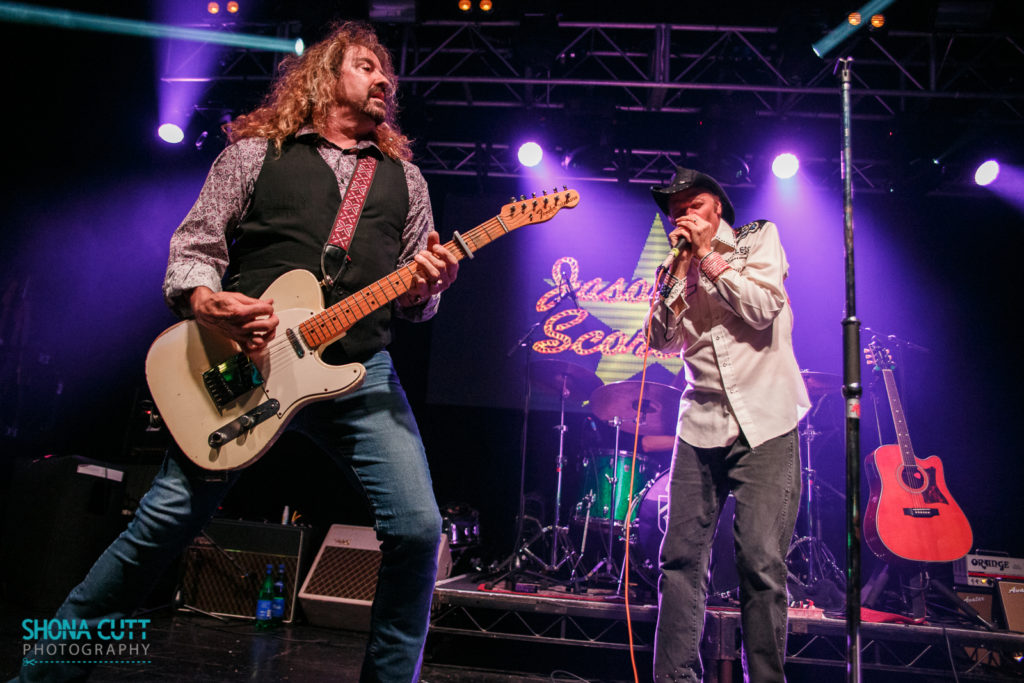 The Scorchers play a career-spanning set that takes in the hits (White Lies, obviously) but also highlights the frontman’s collaborative songwriting skills. If Bible and a Gun sounds as though it’s drawn straight from the Steve Earle songbook, that’s because it is, being co-written with his former Nashville neighbour (“My first wife was good friends with his” – comedy pause – “fifth wife”). Superfan Ginger Wildheart also had a hand in Moonshine Guy, whose construction and lyrics (“Loves the Stones, hates the Doors/Thinks the Beatles sing for girls/He’s a moonshine guy in a six-pack world”) are pure Wildhearts. 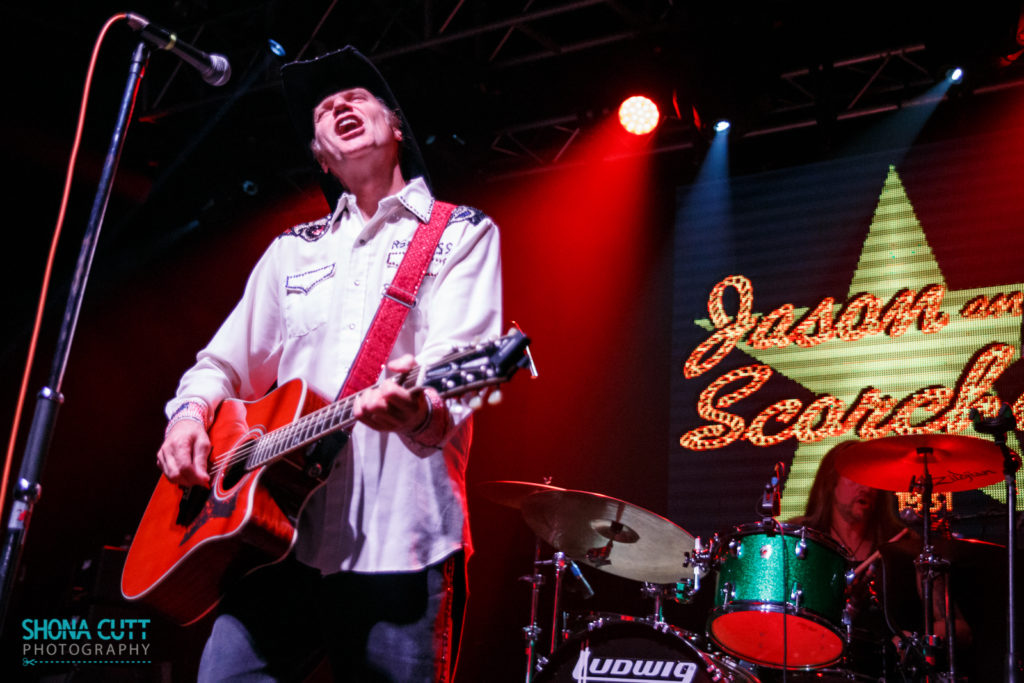 Phil Ochs’ My Kingdom for a Car is repurposed imaginatively as a thrashabilly rock-out with another furious fretboard frenzy from the great Warner Hodges – him again – who also gets his own solo spot with the hard-rockin’ Better Than This (yep, he can sing a bit too). 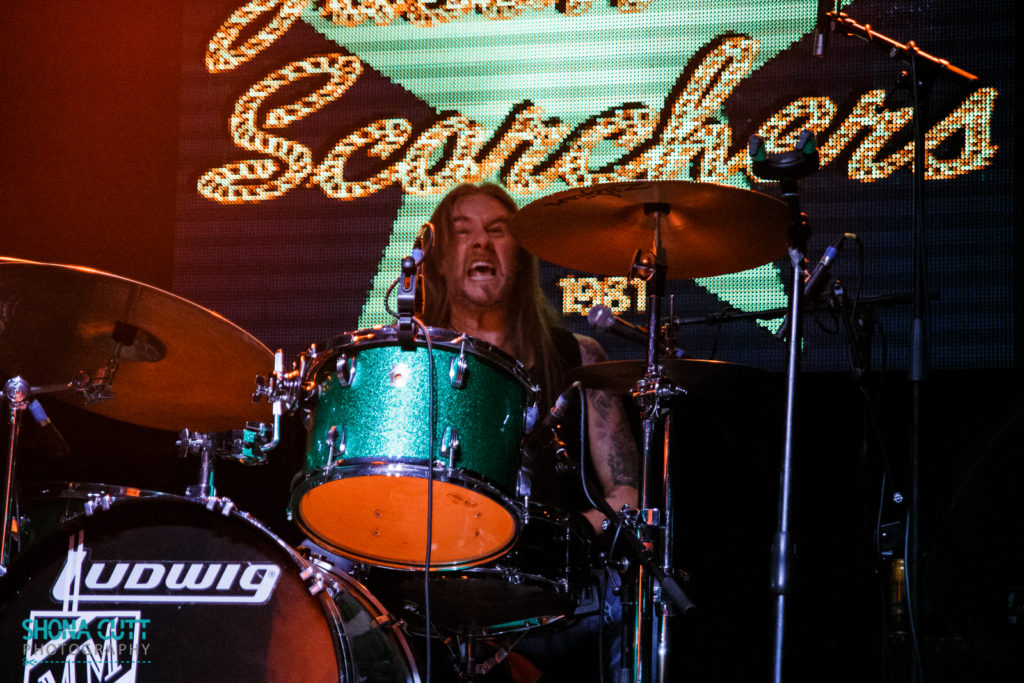 But hang on a minute: who’s that familiar hairy fella behind the kit, additionally contributing backing vocals? Why it’s the fabulously named Pontus Snibb, whose southern credentials are that he hails from southern Sweden. Like Dan Baird’s bassist Micke Nilsson, the multi-talented Snibb is a member of AC/DC-esque Scando hard rockers Bonafide (the frontman and guitarist, to be precise), who were last seen on this stage supporting The Quireboys. A long-time, on-off associate of the Scorchers, he really drives these songs along. No wonder there’s such a spring in Mr. Ringenberg’s step. 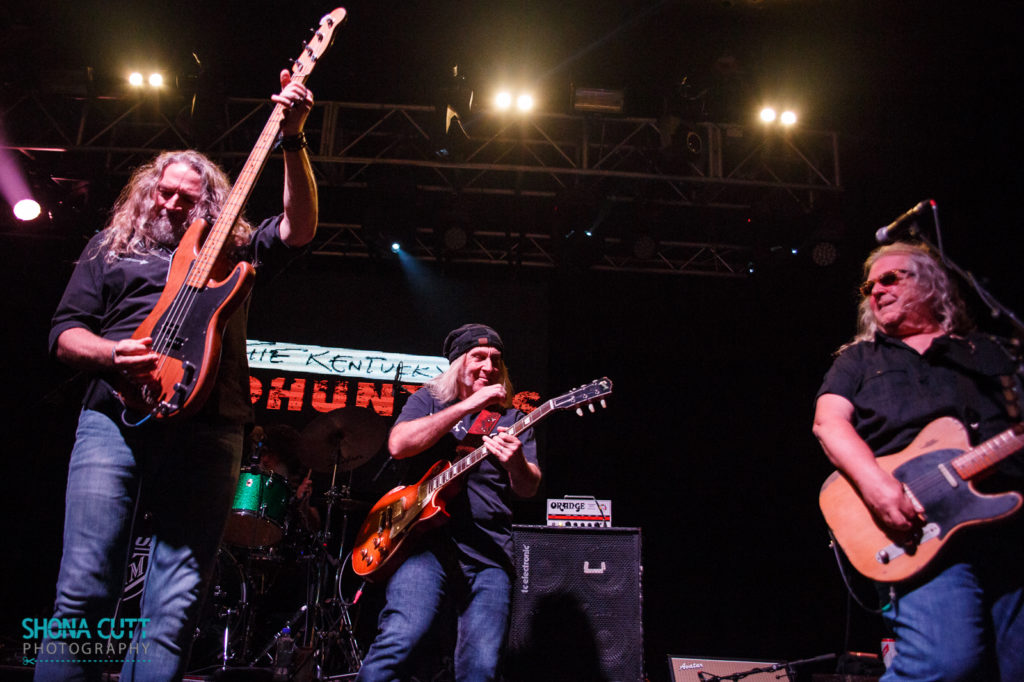 Gnarly veteran Grammy winners The Kentucky Headhunters have been rockin’ in one form or another for more than half a century, but only made it to these shores a couple of years ago. That makes them the act on this bill with the lowest UK profile. The promoter might want to rethink the wisdom of the headliner rotation arrangement on future dates, as some of the audience drift away after the Scorchers. 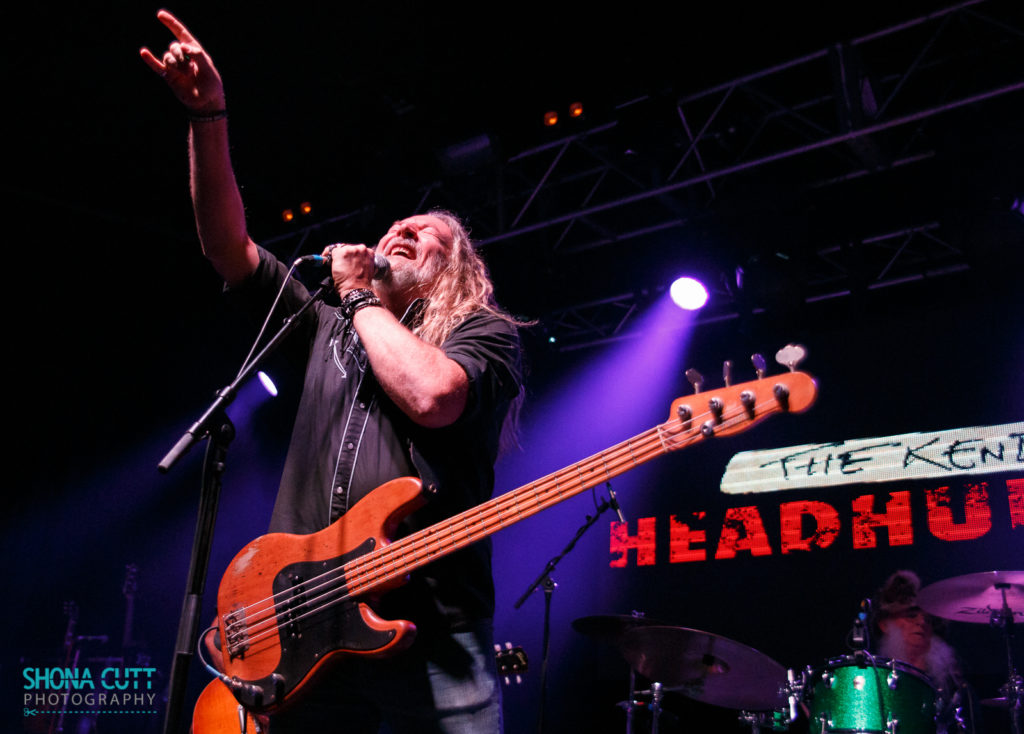 But, hey, that’s their loss. The Headhunters haven’t lasted this long without honing their unpretentious blue-collar craft to perfection. Given that they play a lot of country music festivals, we might have expected the accent to be on the pickin’ in this performance. We couldn’t have been more wrong, as they break out the soulful heavy blues, with lead vocalist Doug Phelps’ splendid big fat bass tone well to the fore. 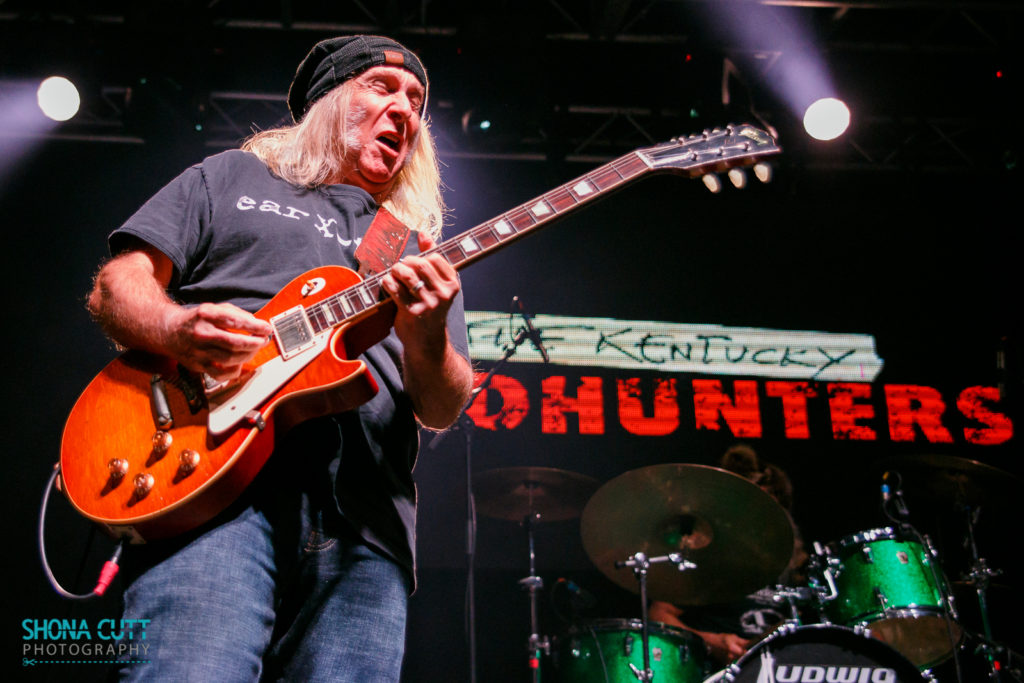 Co-founding rhythm guitarist Richard Young (father of Black Stone Cherry drummer John Fred Young) reveals that Chuck Berry’s pianist, the late Johnnie Johnson, was a key influence in knocking the band into shape, and they play the irresistible old-timey barrelhouse rock’n’roll of Stumblin’ from their That’ll Work collaboration with him in tribute. 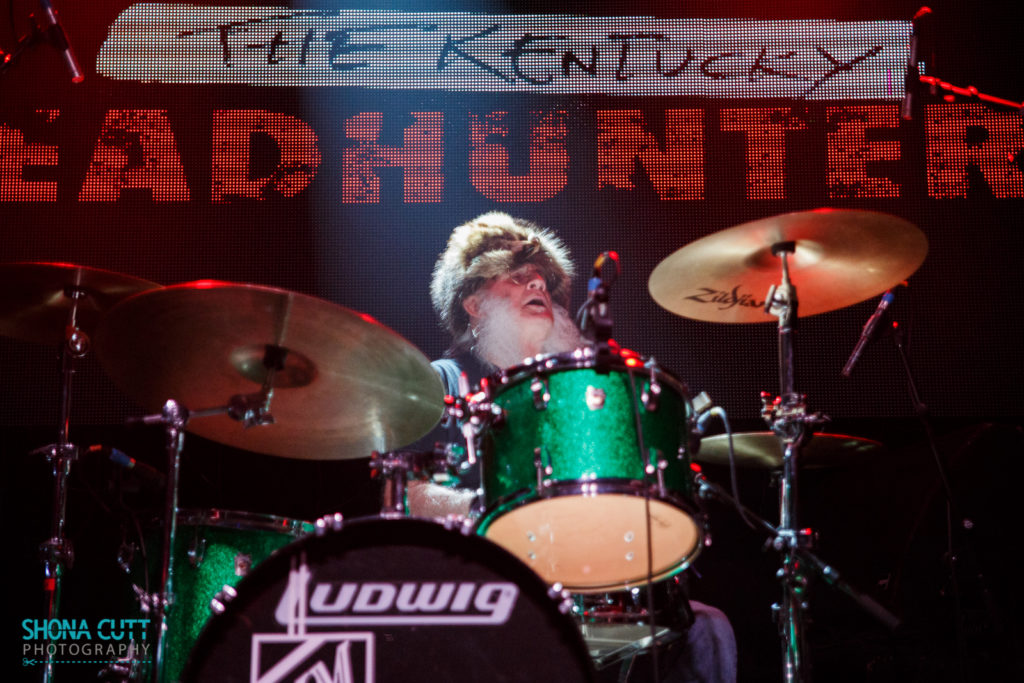 Eyes frequently closed in concentration, guitarist Greg Martin is an understated yet effective team player, while Richard’s drummer brother Fred keeps this stuff swinging where lesser performers might be inclined to plod. He also sports the best sideburns in all of rock. Respect! 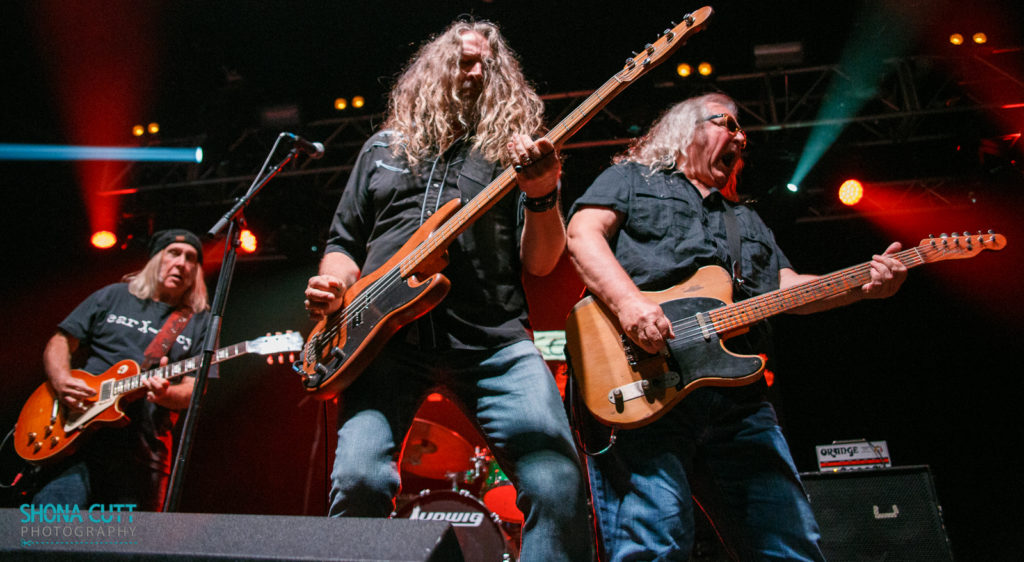 Rather like Warren Haynes’ Gov’t Mule, these veteran roadhogs have a winning way with a well-chosen cover, from the Freddie King blues standard Have You Ever Loved a Woman? to Norman Greenbaum’s hit Spirit in the Sky – a rare exception to the ‘devil has all the best tunes’ rule, which presumably goes down a treat at those Bible Belt country fairs – and a particularly fine House of the Rising Sun, repurposed with paint-stripper vocals.

Hearty yee-haws all round, then. Come back soon y’all.