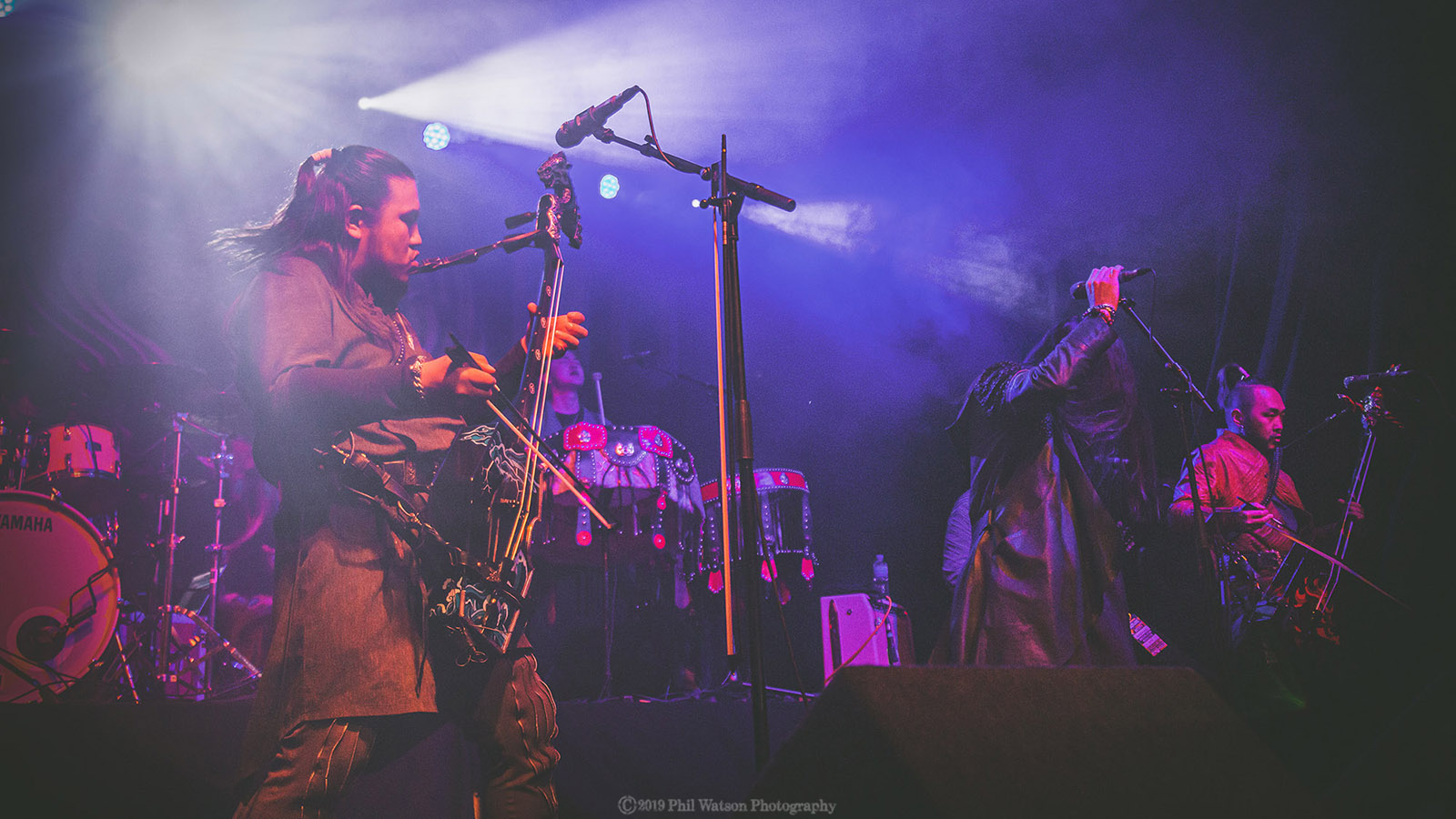 It used to be that the only way non-European musicians could get a hearing in this country was by allowing themselves to become stuck in the worthy WOMAD world music ghetto, playing to a narrow audience with very particular tastes and expectations. But the advent of global metal has meant that bands who prefer to rock rather more loudly, while incorporating elements of their own culture and instrumentation, have built appreciative followings in the open-minded, self-sustaining metal scene. Here in Bristol, we’ve enjoyed everything from Taiwanese political symphonic black metallers ChthoniC to Tunisian oriental prog-metallers Myrath in recent years without the mainstream media noticing. But then along came Mongolia’s The Hu, whose two videos “went viral”, as the ghastly saying goes, attracting 28 million YouTube views and attention from the likes of GQ magazine and the Metro freesheet, neither of which have hitherto demonstrated much of an interest in the world of metal. 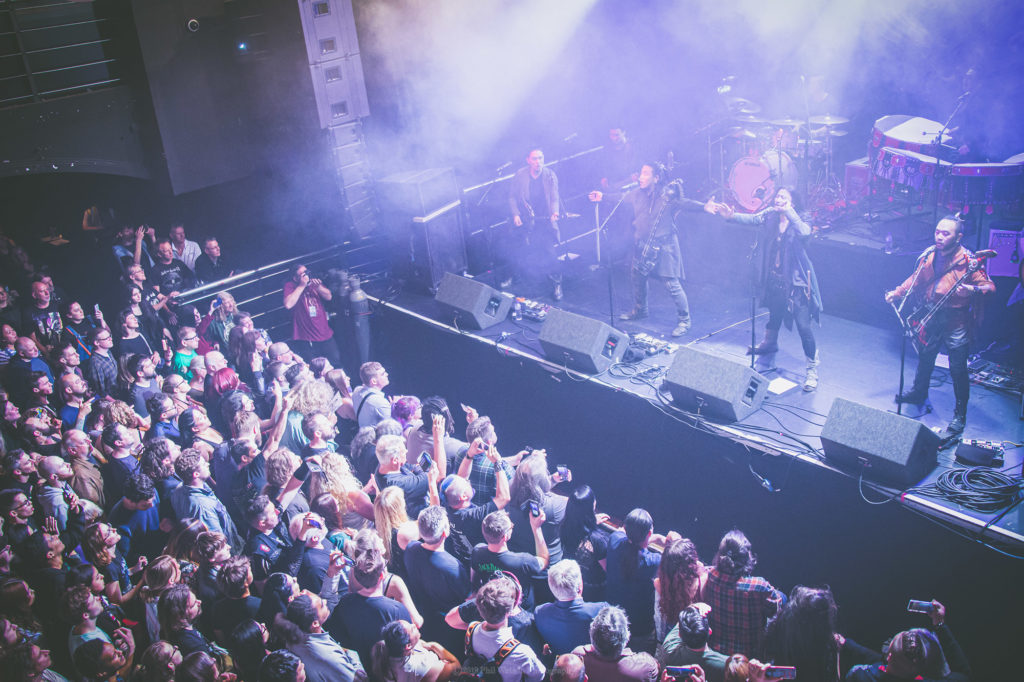 Swiftly signed to the same label as Mötley Crüe, they’ve been dispatched to lay waste to the summer Euro metal festival circuit and arrive at a sold-out SWX hot from Drownload. So here’s a band who speak virtually no English performing a 90-minute headline set of music that, for the most part, nobody’s heard to a packed and rowdy audience. What could possibly go wrong? 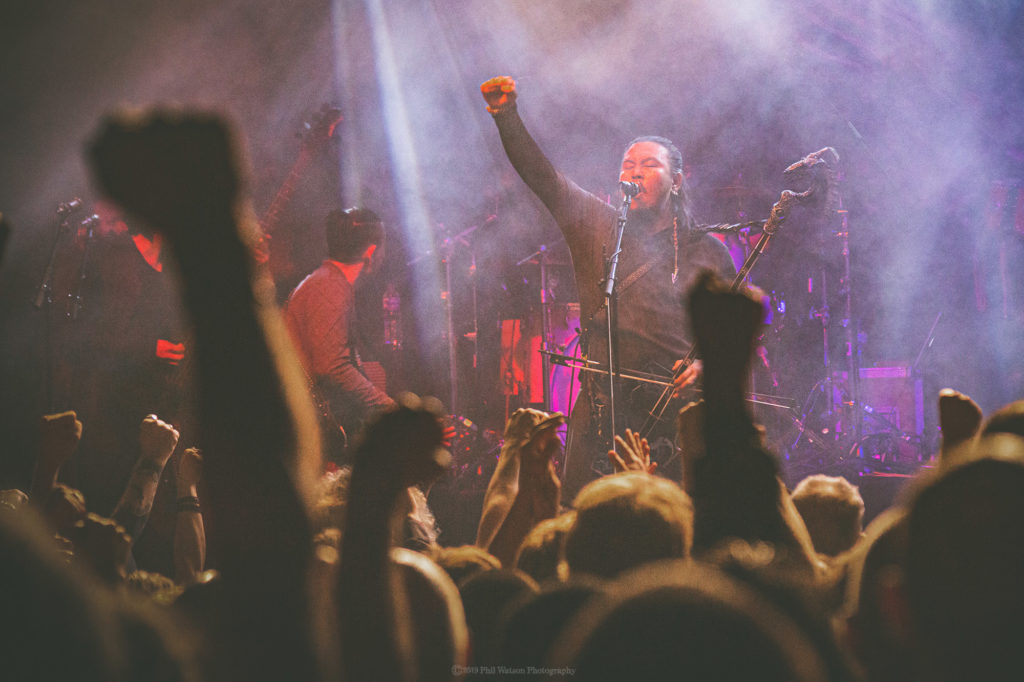 The evening gets off to something of a shaky start as we turn up to find a bloke playing records centre stage. He does that funny DJ thing of appearing industrious by continuously fiddling with the decks, which makes no appreciable difference to the sound coming out of the speakers. The source seems to be a ’20 Hard Rock Classics (with a bit of nu-metal chucked in)’ compilation picked up from a car boot sale. Y’know – Ozzy, Bon Jovi, Def Leppard, Aerosmith, AC/DC, Queen, etc. Now presumably The Hu’s vast array of instrumentation, which includes two drum kits, means that there’s no room for a support act. But this seems to go on for hours. Actually, I checked. It did go on for hours. He receives a huge cheer as he departs. 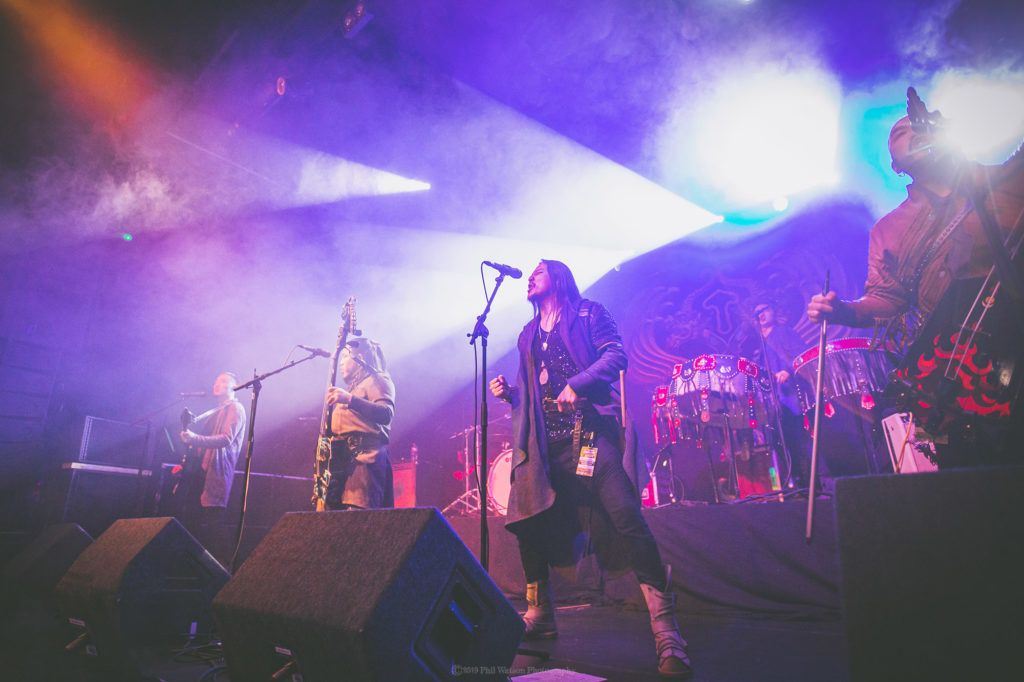 Finally, the Mongolian horde arrive on stage. And quite a mini-horde it is too, the band’s four key classically trained members who play traditional acoustic instruments being augmented by an additional quartet, comprising a brace of drummers and a guitarist and bassist. It must be a sound engineer’s nightmare getting the balance right. But the combination works brilliantly, with the thunderous rhythms and electric instrumentation super-charging the band’s rockin’ onslaught without ever succumbing to the sonic bloat that results when, say, Eric Clapton appears on stage surrounded by 17 musicians. 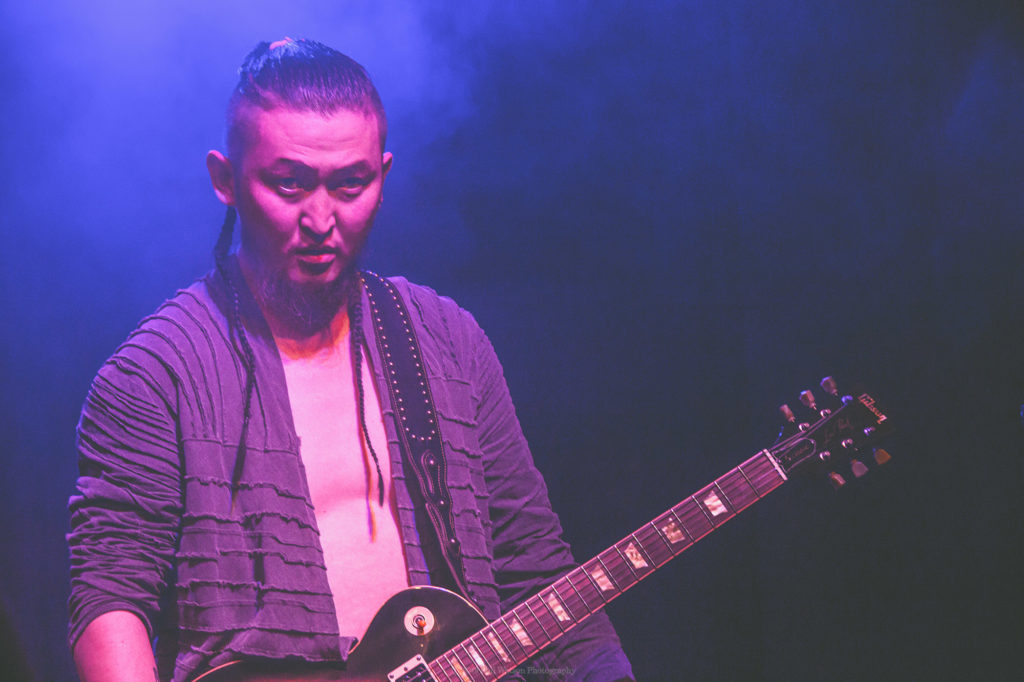 Opener Shoog Shoog – only the third song from their upcoming debut album, Gereg, to get an official release – is delivered in a flurry of headbanging, horns-throwing and air-punching, swiftly getting the up-for-it audience onside. Guttural throat singing and metal proves such a perfect combination that it’s a wonder Mongolia isn’t already a world leader in the field, while the striking horsehead fiddles played by band leader Galbadrakh Tsendbaatar and Enkhasaikhan Batjargal produce an impressive range of sounds, including some splendid whinnying. And, frankly, one can never have too much whinnying in metal. 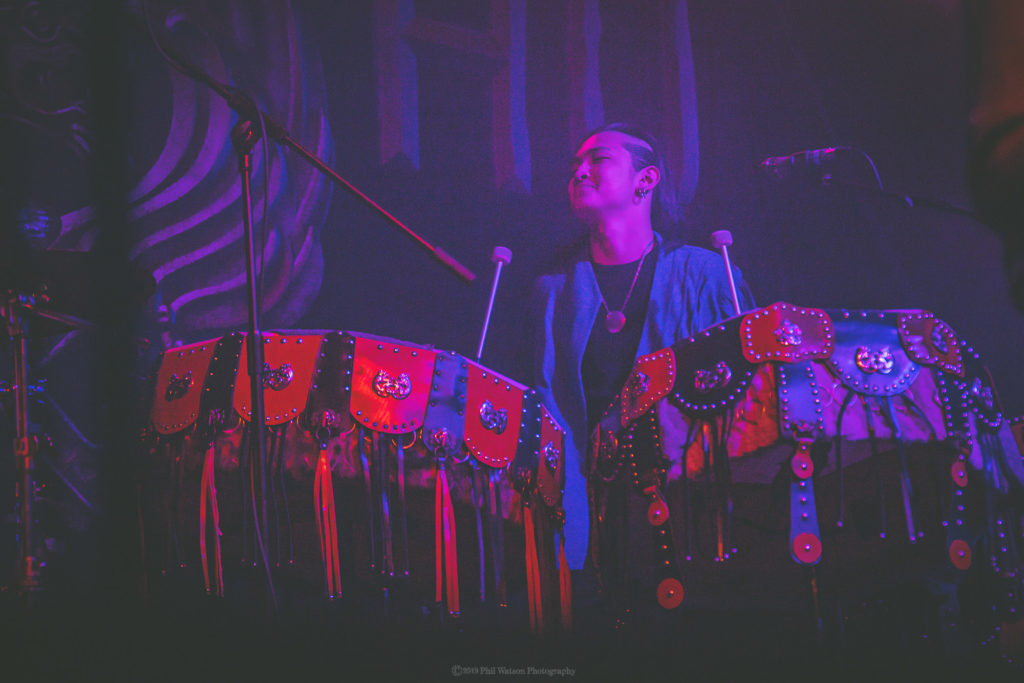 The Hu describe their music as “hunnu rock”, of which they are the sole exemplars. But although their sound is certainly distinctive, it fits comfortably alongside that of the likes of Wardruna, Eluveitie and Korpiklaani in the booming folk-metal sub-genre. There’s an impressive diversity here too, both in the eclecticism of the compositions and variety of instrumentation, with long-haired Nyamjantsan Galsanjamts contributing the most accomplished rock star poses while adding jaw harp and tsuur to the mix. The slower, most atmospheric and hypnotic songs, with multi-part throat singing, are oddly reminsicent of Popol Vuh. Indeed, if you half-close your eyes you can practically picture conquistadors hacking their way through the Peruvian rainforest in a Herzog movie. 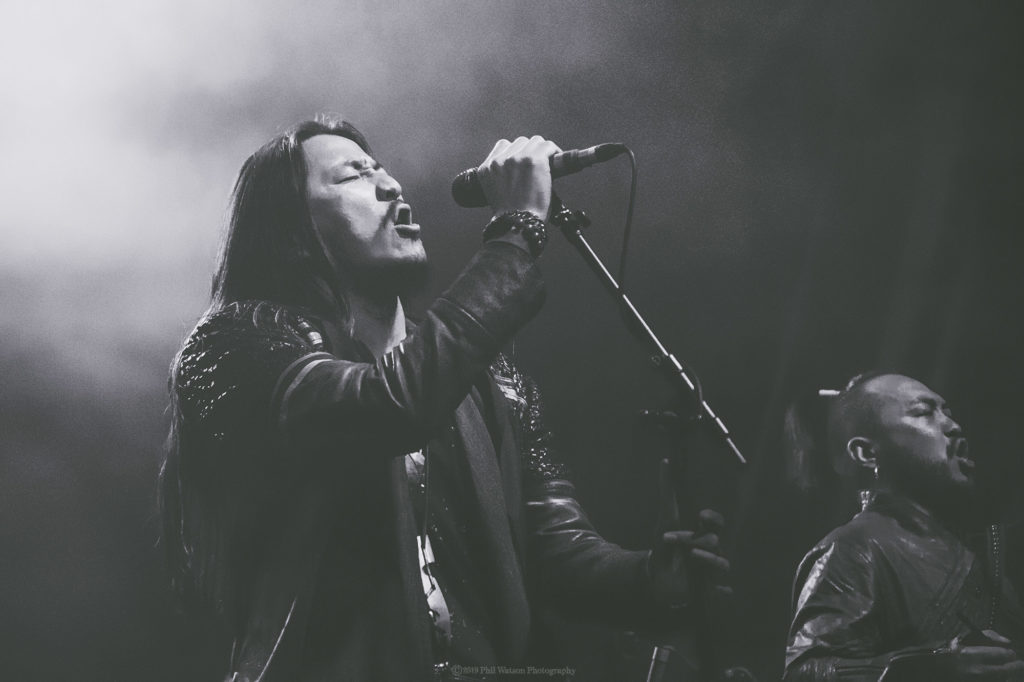 It’s a well-paced set too, picking up momentum and getting heavier as it progresses. When those two horsehead fiddles are wailing away in unison it’s hard not to be put in mind of Finnish cello-metallers Apocalyptica. In consort with the furious assault of the drummers (one on a full rock kit, the other deploying traditional percussion), they frequently threaten to mutate into Enter Sandman at any moment. 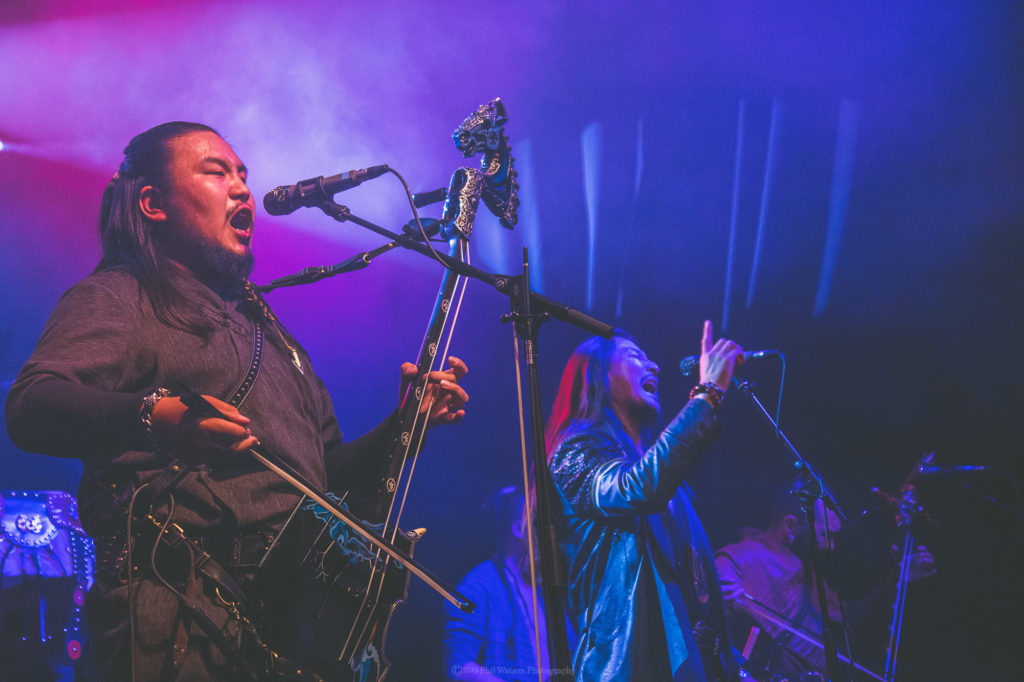 Rather than reserve the two songs that everyone knows – Yuve Yuve Yu and Wolf Totem – for the end of the set, they dispatch them in quick succession about an hour in, and are clearly delighted to find the audience joining in with that ‘HU! HU! HU!” chant. 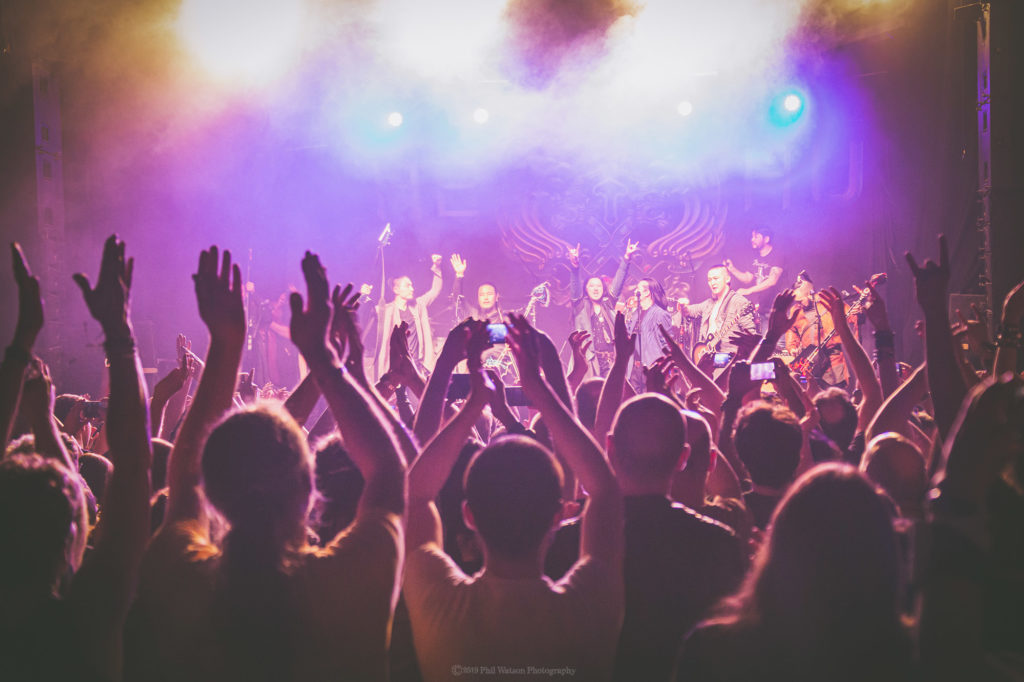 What is fast becoming unstoppable hype proves fully justified, then, as The Hu clearly have at least two albums of quality material ready to unleash. There’s obviously some canny management behind them too. The strategy of targeting the loyal metal audience and bringing mainstream crowds on board in their slipstream is already paying off. Today Ulaanbaatar, tomorrow the world.