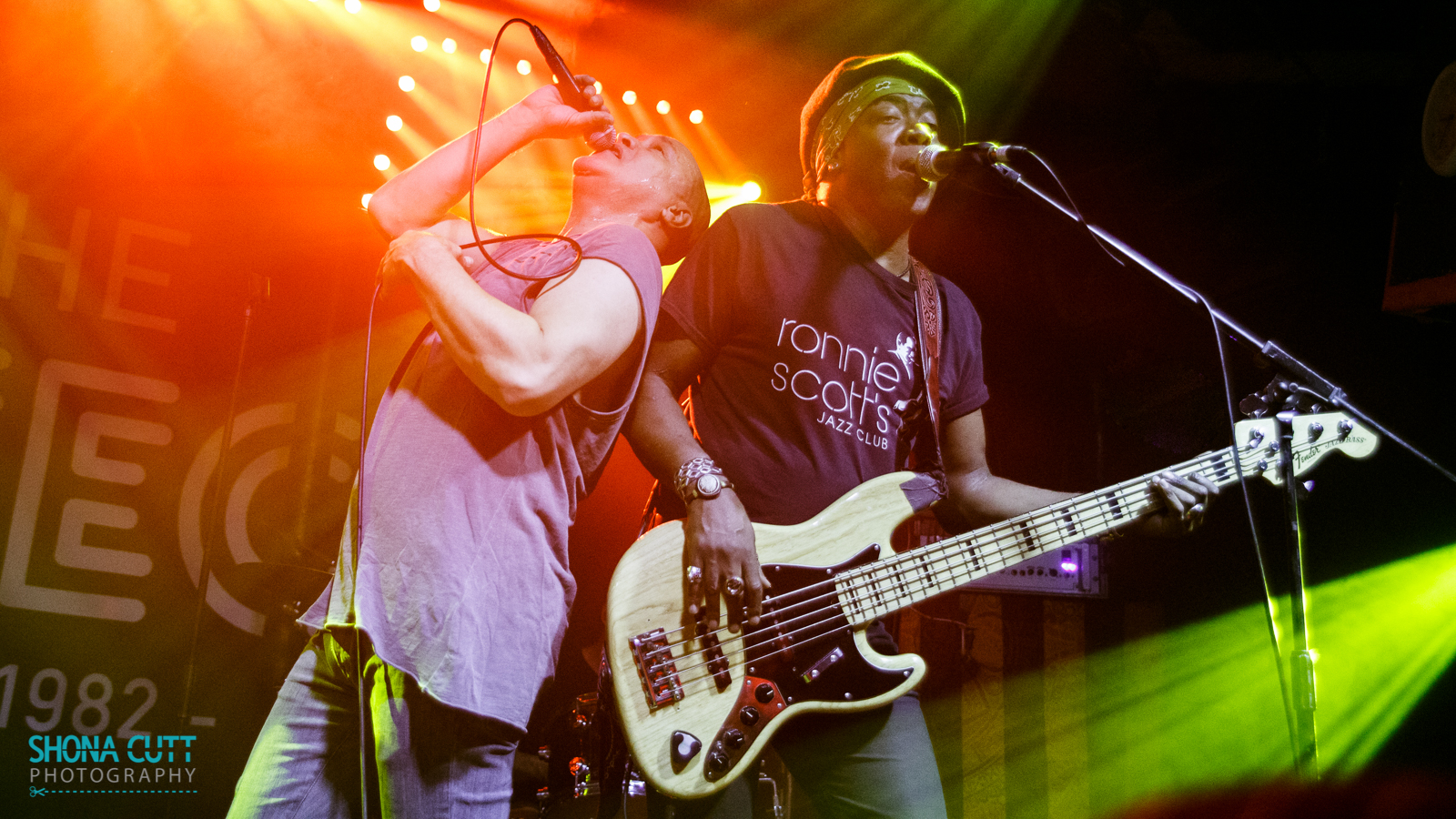 If there’s a silver lining to the looming Brexit catastrophe, it is that when we ‘take back control’ to become a lonely island stewing in bigoted isolationist idiocy we will at least be self-sufficient in one thing: hugely talented and ambitious young hard rock bands.

There are swarms of the buggers these days, all champing at the bit to usurp the old guard. Trouble is that few of them boast the spark of originality and charisma that propelled the likes of Thunder and The Darkness out of the clubs. 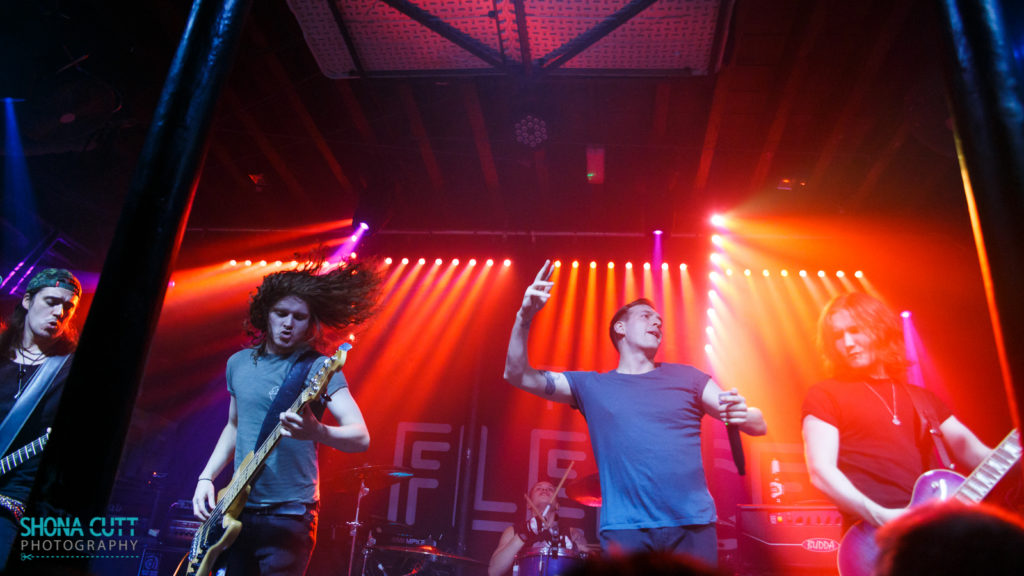 Glaswegians Maison Hill are better than most and waste no time in winning over a packed audience who are predisposed to enjoy their punchy, riff-driven songs. There are no weak spots here, from James Bird’s guitar solos to Scott Taylor’s powerful vocals. But nor is there any sign yet of the hit-in-waiting that will give them the edge on their peers and permit them to follow 2018’s big UK rock success story – and their former support act – Massive Wagons into the top 20. 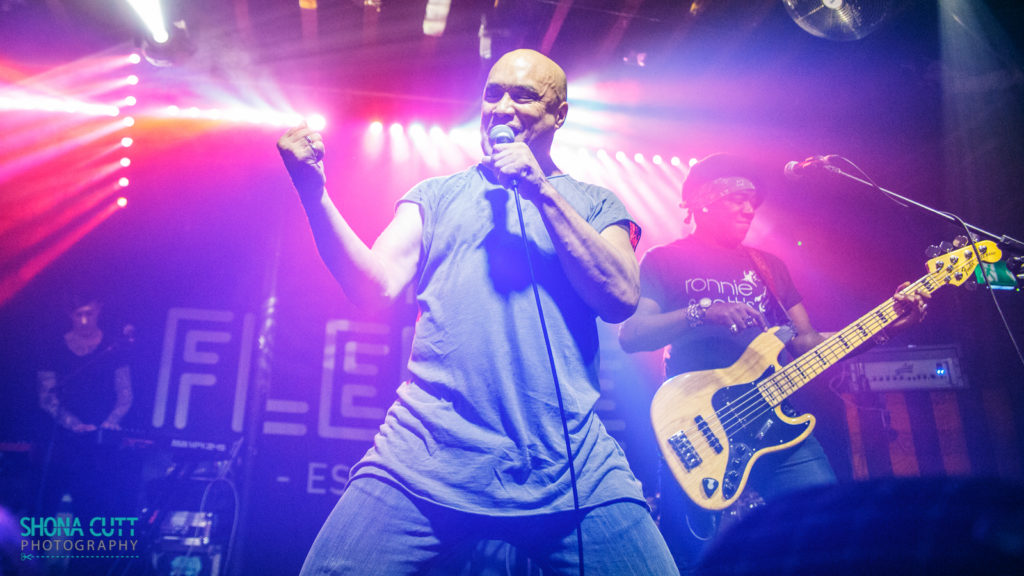 Back in the late 1980s, the suits at Mercury Records must have thought they’d got the new Bon Jovi on their hands when they signed multi-racial Portland funk-rockers the Dan Reed Network. Slick vids, big hair, alarming stage clothes and anaemic-sounding albums on which both the rock and the funk were neutered in pursuit of mainstream radio play . . . licence to print money granted! But while those execs were off putting down-payments on their new holiday homes, they reckoned without Dan’s refusal to play the game. First he shaved his head. Then came full meltdown, whereupon he retreated to a Buddhist monastery and communed with the Dalai Lama. Meanwhile, guitarist Brion James became an organic beekeeper in Honduras and bassist Melvin Brannon II landed a gig with Booker T. 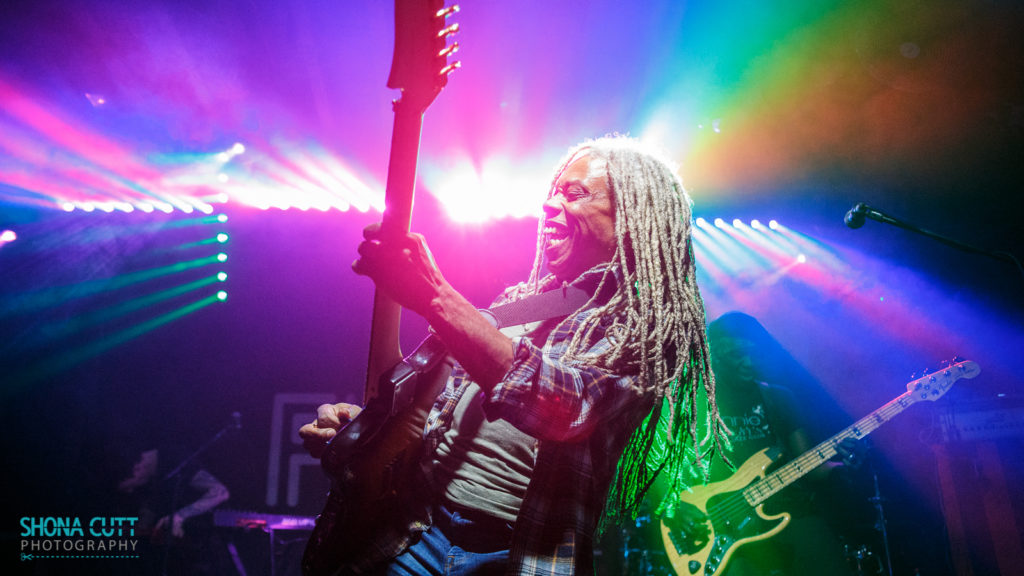 Few could have predicted that Dan would reunite the Network after two decades apart, nor that they’d finally play their first ever headlining show in Bristol. Two things are clear from opening statement of intent Rock You All Night Long. First, this is exactly how these songs should sound when stripped of that insipid period production sheen, with Brannon’s suitably gut-punching funk bass and James’s rock guitar turned up high in the mix, while the keyboards – the only element that dates the early songs to the era in which they were composed – are relegated back down to where they belong. 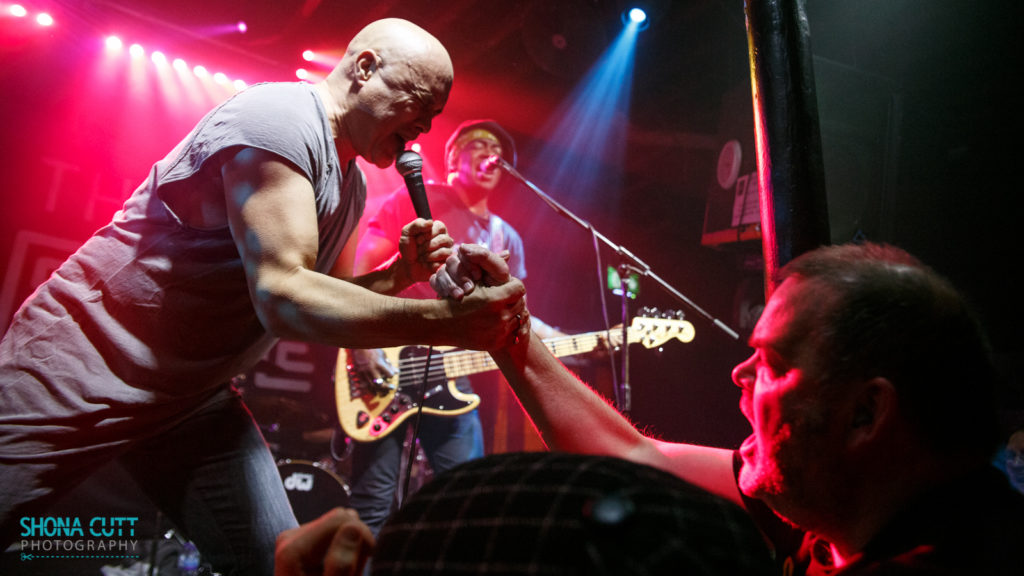 Secondly, these guys may have dodged the Big League, but they’re on magnificent form and are having the time of their lives up on the Fleece’s stage in front of a wildly enthusiastic audience. Reed, in particular, seems eager to shed the reputation for rather solemn spirituality that he has erroneously acquired. He might look like a serene Buddhist these days, but that doesn’t stop him ripping the piss out of his bandmates and sharing some choice anecdotage, such as the time “filthy motherfucker” Bill Wyman called the band over just before they were due to go on stage supporting the Stones and told them a joke so disgusting that the unfortunate singer’s head was filled with paedophiles for their entire set. He also reminisces about his first band with schoolchum drummer Dan Pred (who will later be presented with a tray of shots to celebrate his “35th” birthday), who used to get themselves booked for school proms and then alienate the audience by playing Rush’s 2112 in its entirety. 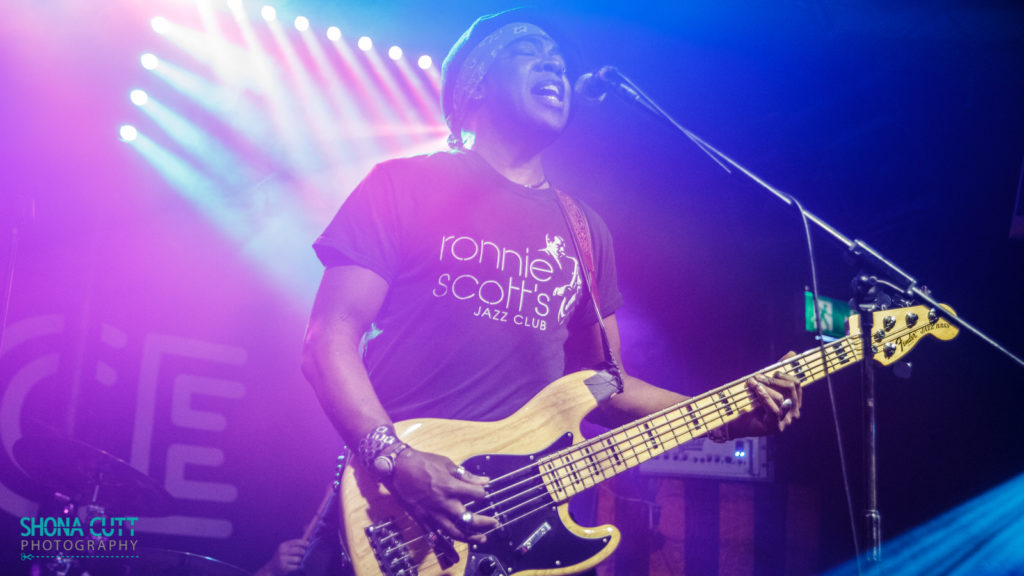 Multiple equipment malfunctions ensue from Under My Skin onwards – a busted monitor, a broken guitar string, a malfunctioning bass – all of which the band take in their stride. At one point while roadies are scurrying about, Reed even launches into an impromptu rendition of the jazz standard All of Me, with the rest of the band eventually joining in, leading him to remark that they have a bright future as a lounge jazz act if the rock thing doesn’t work out.

The bump’n’grind of  Doin’ the Love Thing makes a welcome return to the set, as does Tiger in a Dress, which Reed initially felt uncomfortable about playing after his spiritual awakening. Mercifully, the best of the newer songs – such as the riff-tastic Champion, impeccably catchy Fade to Light and hip-swingin’ Save the World (for which James takes lead vocals) – not only live up the standards of the original stuff but also maintain the Network’s trademark unhectoring lyrical positivity as Reed eschews any temptation to proselytise. Put ’em on a double bill with the equally upbeat Skindred and even the most glowering of evil Satanic black metallers would be unable to resist the urge to grin and bounce along. 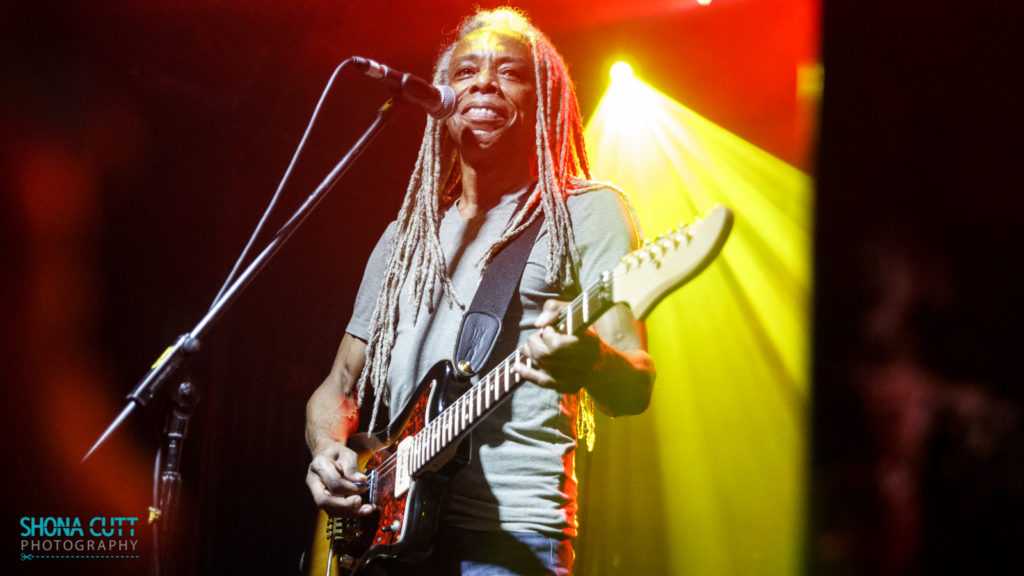 Baby Now I traditionally offers the opportunity to meander into an eclectic selection of covers. The usual Enter Sandman and Kiss’s atypical disco hit I Was Made for Lovin’ You are present and correct, but this time they add Frankie’s Relax – with Reed singing the lyrics saucily at Brannon, who in turn takes the lead vocal for AC/DC’s You Shook Me All Night Long. 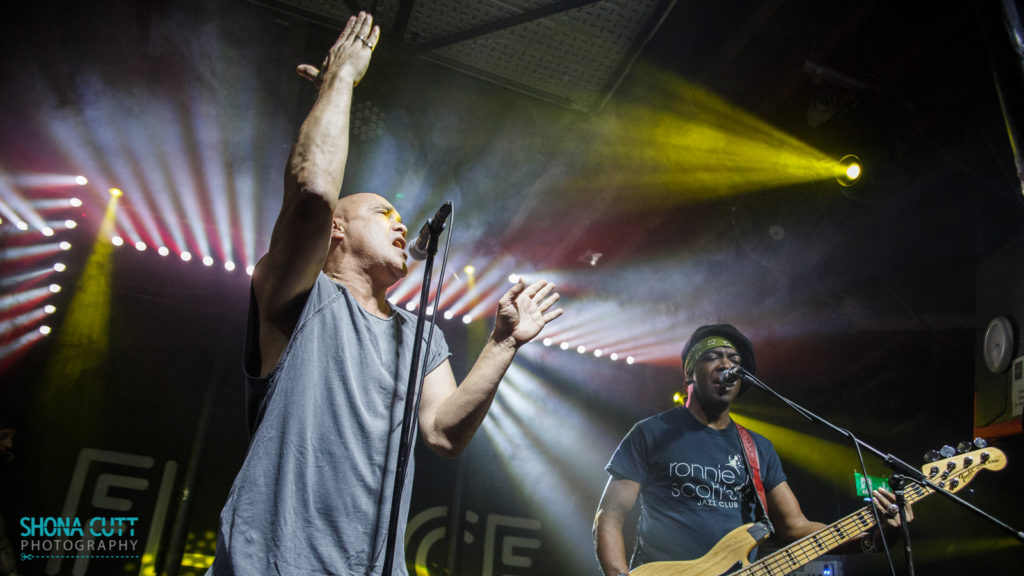 Stronger than Steel, the power ballad from the Nile Rodgers-produced Slam album, still carries a slight whiff of fromage, but its status as a wedding favourite keeps the band in royalties and helps them to continue, so one can hardly object. Lurking behind the keyboards at the back of the stage for much of the evening, Rob Daiker gets a welcome turn in the spotlight with a solo performance of All for a Kiss. Yep – the guy really can sing and play guitar in addition to contributing those ’80s parping noises.

Ritual is a suitably euphoric singalong set closer. But they ain’t done yet, teaming up for an a cappella rendition of Long Way to Go, with Brannon’s baritone proving almost as deep as his bass. Reed promises they’ll be back. Just don’t make us wait another 30 years, chum!