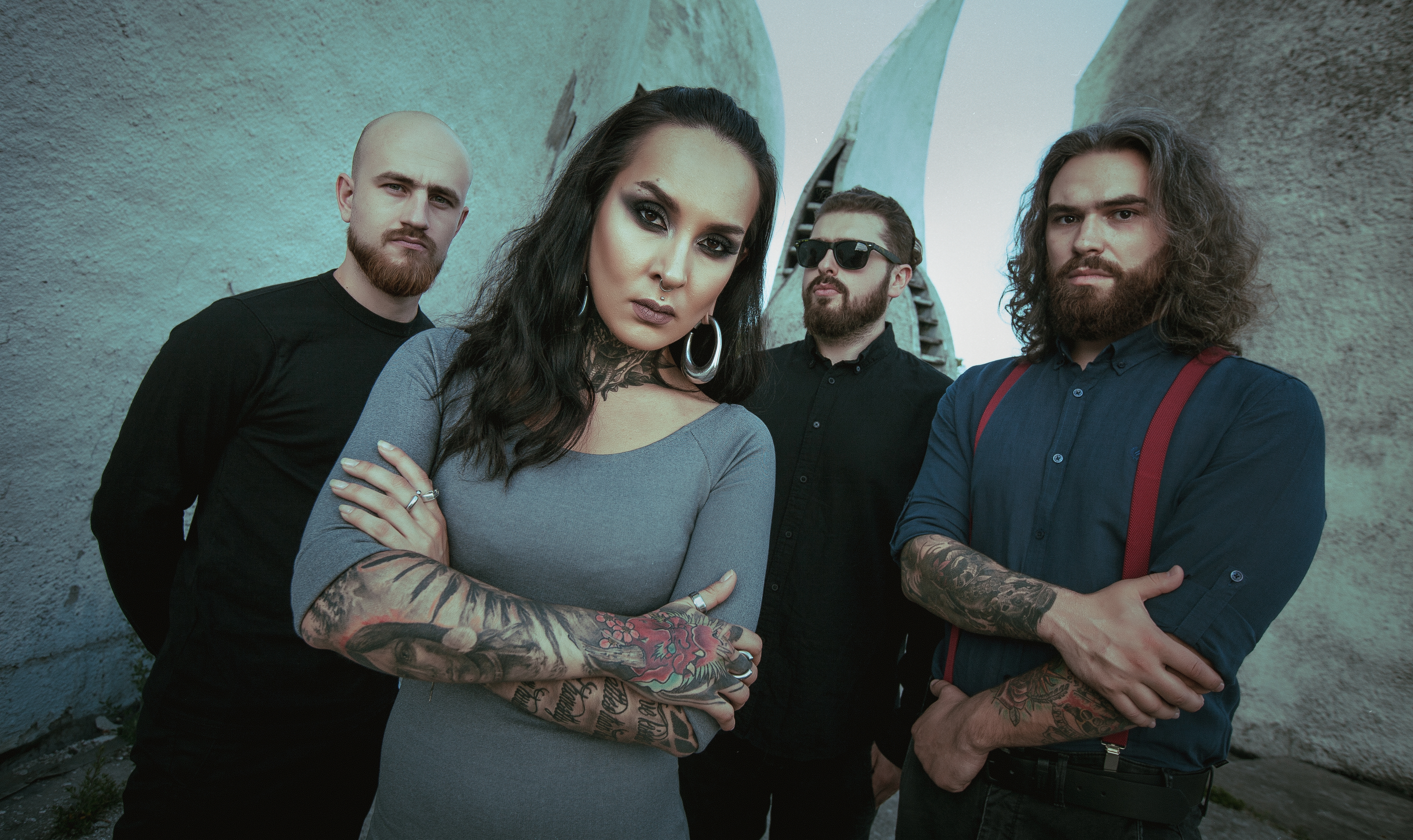 We seem to say this every month, but the majority of the shows previewed below are already sold out (Jinjer, The Darkness, Saving Grace, Toby Jepson). The Coming Soon section at the end is fully updated. You really shouldn’t hang about if you’re planning to buy tickets for upcoming shows by  Lamb of God or Testament.

Oh, and let’s hear it for Bristol’s very own Sons of Liberty. Having sold out the Louisiana a couple of months ago, they’re moving up to the Thekla for a gig next March. Tickets are on sale now.

Being a prog-metal band in Ukriane ain’t the easiest of tasks. Being a prog-metal band from the self-declared People’s Republic of Donetsk and watching jets flying overhead every day as tensions rise is even less easy. Little wonder that Jinjer decided to flee the war zone. Fortunately, the reputation of Tatiana Shmailyuk and chums has been blossoming elsewhere. New album, Macro, on Napalm is their most mature and diverse release to date. Hell, there’s even a hint of reggae in there. “Eclectic and exhilarating, Macro‘s penchant for shit-kicking fury will knock you on your arse before its prog-hued intelligence lifts it back up for more,” was Metal Hammer‘s verdict. Canadian melodic death metallers The Agonist are best known as the band that spawned current Arch Enemy vocalist Alyssa White-Gluz. Fascinating fact: Guitarist Danny Marino is the nephew of Frank Marino (of Mahogany Rush fame). The promoter seems to have rather underestimated the popularity of this show. It was originally scheduled for the Exchange but was upgraded to the Thekla and has now sold out here too.

Their fifteen minutes might have expired some time ago, but Justin and the chaps put the work in to establish a genuine fan base that didn’t evaporate once the ghastly scenesters all fucked off. They’re now back to their natural level, with latest album Easter is Cancelled (complete with Christian-baiting artwork) becoming yet another top ten hit. A typically playful collection, this opens with the teasing Rock and Roll Deserves to Die (with amusing accompanying video) and includes the splendidly titled Heavy Metal Lover. Great to see more ROCK at the Pavilion too. The place is steeped in history, having played host to – deep breath – The Beatles, The Stones, Little Richard, The Kinks, The Who, Them (with Van Morrison), The Moody Blues, The Byrds, The Yardbirds, Cream, Ike and Tina Turner, Traffic, Pink Floyd, Jethro Tull, King Crimson, Fleetwood Mac, Led Zeppelin and Jimi Hendrix back in the 1960s. Support comes from the rather impressive Rews, whom you may recall opening for Halestorm and Avatar at the Academy. Judging by new single Birdsong, this experience seems to have inspired them to rock out rather more heavily. Excellent.

It’s the album anniversary show times three. That’s right: three bands – at least two of whom should have been a lot bigger than they were – perform releases from 30 years ago in their entirety. These days, everyone loves the likes of Journey and Toto – even those who tiresomely pretend to do so ‘ironically’. But why didn’t Britain produce an AOR band of that calibre back in the 1980s? Actually, we did. The band was called FM, and they specialised in ridiculously catchy melodic rock featuring the golden soul voice of Steve Overland. Needless to say, the mainstream media ignored them. Shame it’s not the anniversary of their 1986 debut, Indiscreet (featuring That Girl, as covered by Iron Maiden), but 1989’s Tough It Out will do just fine. Solid second-division Scots rockers Gun remain, alas, best known for their rock cover of Cameo’s Word Up, which was also their biggest hit. Tonight they’ll be revisiting their first and best album, Taking On the World. Back in the 1980s, funk-rockers The Dan Reed Network were being lined up by the suits as the missing link between Prince and Bon Jovi. But Dan scuppered his own career by refusing to play the corporate rock game. Instead, he shaved his head and ran away to become a Buddhist. The Network got back together a few years ago and these days Dan seems a lot more comfortable in his skin. They played a great show at the Fleece last year. Tonight they’ll be revisiting the Slam album. Incidentally, Dan’s back at the Fleece in March with Danny Vaughn for an acoustic show under their Snake Oil and Harmony banner.

The name may not be familiar, but the low-key Saving Grace is yet another of Robert Plant’s many projects. They’re so low-key, in fact, that they didn’t even get a mention in this month’s Classic Rock cover feature on Plant. What’s more, their barely announced local debut (and fourth gig) was at the Bath Forum back in February, supporting Fairport Convention. Musically, this self-styled musical co-operative should appeal to anyone who enjoyed the Grammy Award winning Rising Sand album, as it sees Percy trading vocals with Suzi Dian. Expect cheeky acoustic snippets of Led Zep classics too.

Naturally, we’d all like to pretend that we emerged from the womb listening to Zeppelin and Sabbath. But for those of us of a certain age, our introduction to rock came from the likes of The Sweet, T. Rex, Suzi Quatro and Bowie when he rocked (i.e. up to, but no further than, his Thin White Duke incarnation). Then there was Slade, who were, for a few brief years in the early 70s, the biggest band in the land. Like The Sweet, Slade were a real rock band who could actually play (“…the most astonishingly underestimated rock band of all time,” according to veteran former NME hack Keith Altham) but elected to dress preposterously in pursuit of hits as part of the glam rock wave. This is their first Bristol gig in 11 years, and it’s safe to say the set list will be much the same as ever (hits and more hits). Of course, some might question the legitimacy of a Slade without its voice (Noddy Holder) and creative powerhouse (Jim Lea). But close inspection of the credits reveals that most of those hits were Holder/Lea compositions, so they can presumably afford to spend more time with their royalties. Dave Hill and Don Powell still have to make a living, so one can hardly blame them for getting some other blokes in. Anyway, everyone will be pissed and they’re bound to end with That Song.

Bristol’s very own former Little Angels and current Wayward Sons frontman Toby Jepson’s sold-out Christmas shows at the Louisiana last year were such a huge success that he’s decided to do it all again. The format is as before: Toby will be joined by Wayward Sons keyboard player Dave Kemp for acoustic renditions of songs from throughout his career, punctuated by what proved last year to be a wildly unpredictable selection of audience questions compered by BCFM rock DJ Andy Fox. Expect it to be intimate and funny, with a few naff strands of tinsel.

When they formed way back in 1992, Japanese rockers Boris could hardly have anticipated that their name would become increasingly unfortunate. These pigeonhole-dodging experimental/avant-metallers last played the Fleece three years ago, when they revisited their Pink album on its tenth anniversary. Ever-prolific, they’re put out two albums since then: 2017’s pleasingly heavy and aggressive Dear and this year’s LφVE & EVφL (their 25th release), which received rather mixed reviews.