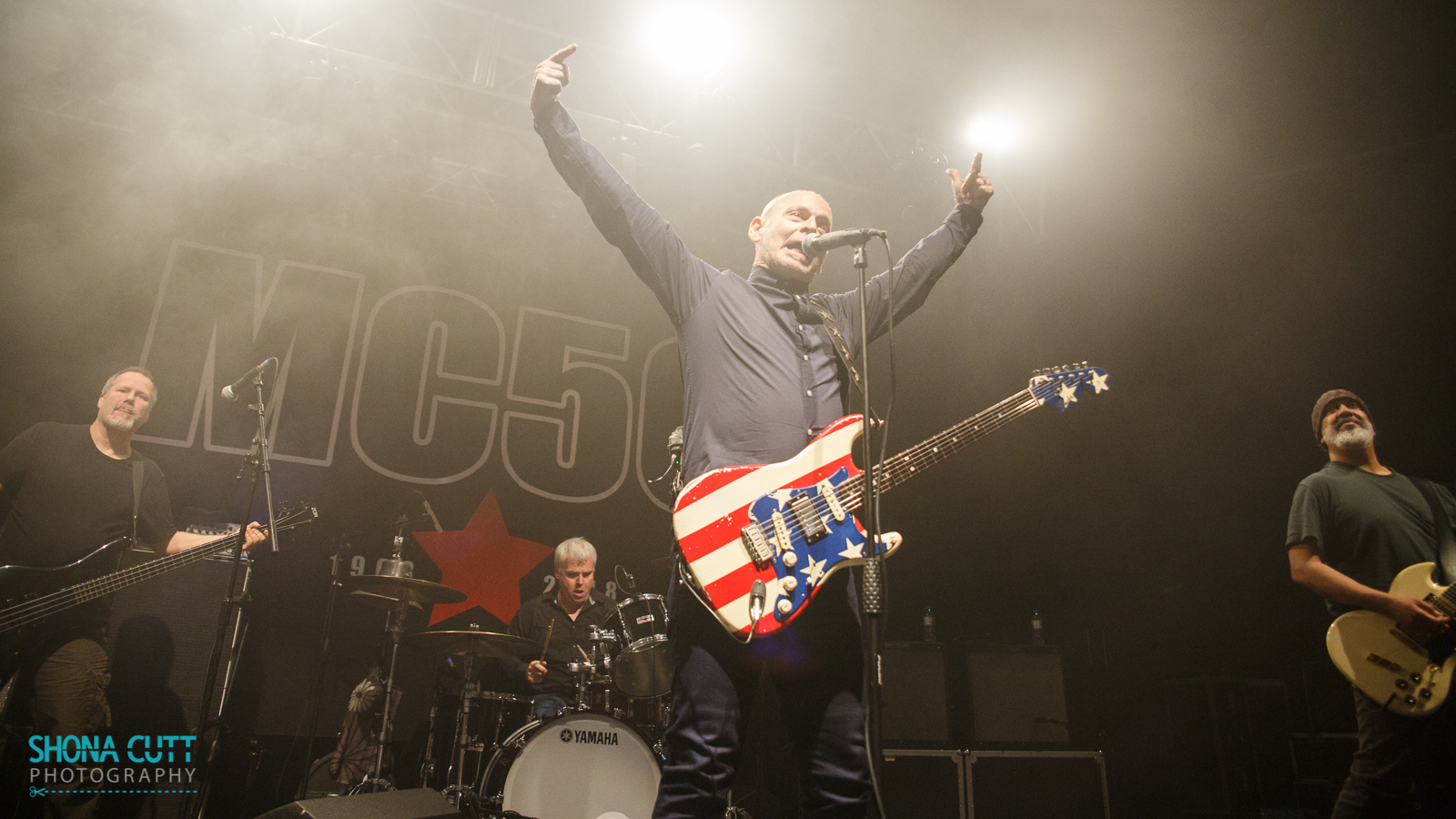 Speculation was rife in the World of Rock. Could Wayne Kramer translate those decades of critical cred into actual ticket sales 50 years on from the MC5’s glory days? If so, who would turn up? Old rockers who can remember a time when everything was just rock, with no tribal subdivisions? Old punks who claim the MC5 as one of their own antecedents, alongside the likes of the Stooges? Old lefties keen to relive the glory days of political rock from that brief period when people actually believed some hairy fellas with guitars could help spark a revolution? Grungers eager to catch up with former Faith No More bassist Billy Gould and Soundgarden guitarist Kim Thayil? Young hipsters yearning for something authentic as blessed relief from the lame-o posturing and fakery of much of what they’re expected to consume?

Aaand the answer is . . . er, mostly Blokes of a Certain Age. The balcony is closed, but the floor is reasonably full by the time the headliners come on. And Big Jeff is down the front, as anticipated, so all is right with the world. 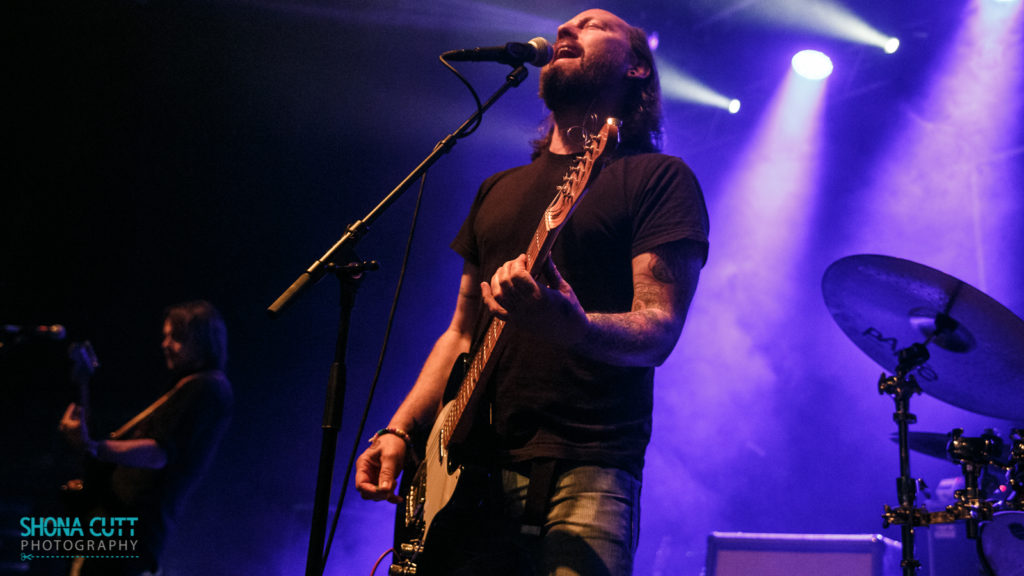 For some unexplained reason, this show is the only date on the tour at which former Hanoi Rocks frontman Michael Monroe wasn’t billed to appear. Instead, the rather sparse crowd who’ve turned up early get Pete Spiby. Who he? Well, some of us remember him as mouthy frontman of enjoyably Sabbathy Britrockers the Black Spiders, who struggled to make it out of the clubs and eventually split, citing – brilliantly – “geographical reasons”. It seems to be all change in Camp Spiby, as he’s now pursuing a more laidback heavy blues/Americana direction with three guitarists and minimal audience interaction. It’s pretty well-crafted stuff, but this is an over-crowded market in which his band could struggle to make an impression. 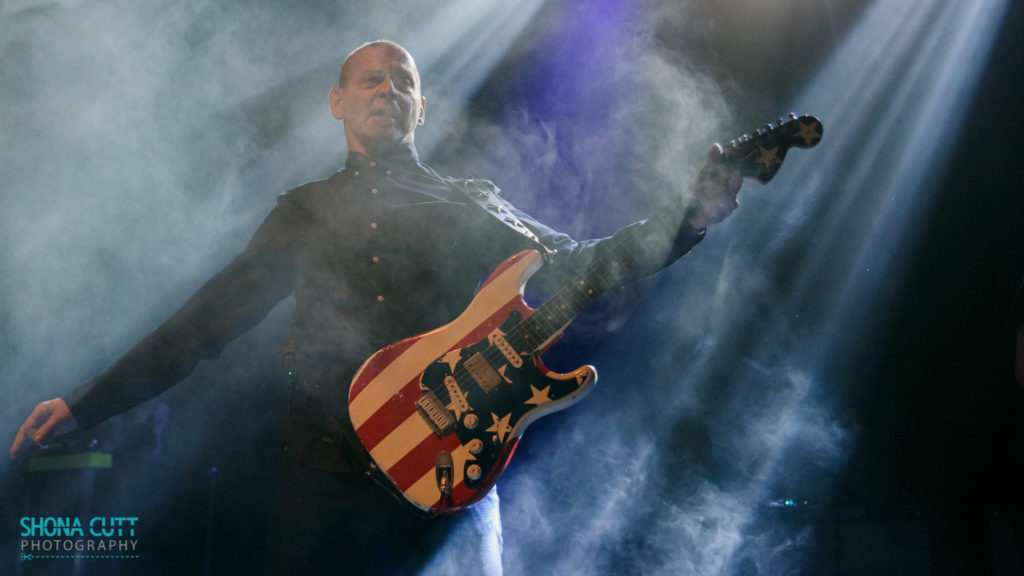 Blimey – it appears all those drugs Mr. Kramer took in the sixties still haven’t worn off. Resembling the bastard lovechild of Wilko Johnson and Bruce Willis, the livewire 70-year-old literally bounces across the stage clutching that familiar stars’n’stripes Fender and proceeds to whisk us back to the Grande Ballroom, Detroit, 1968, for a complete recreation of the Kick Out the Jams live album. 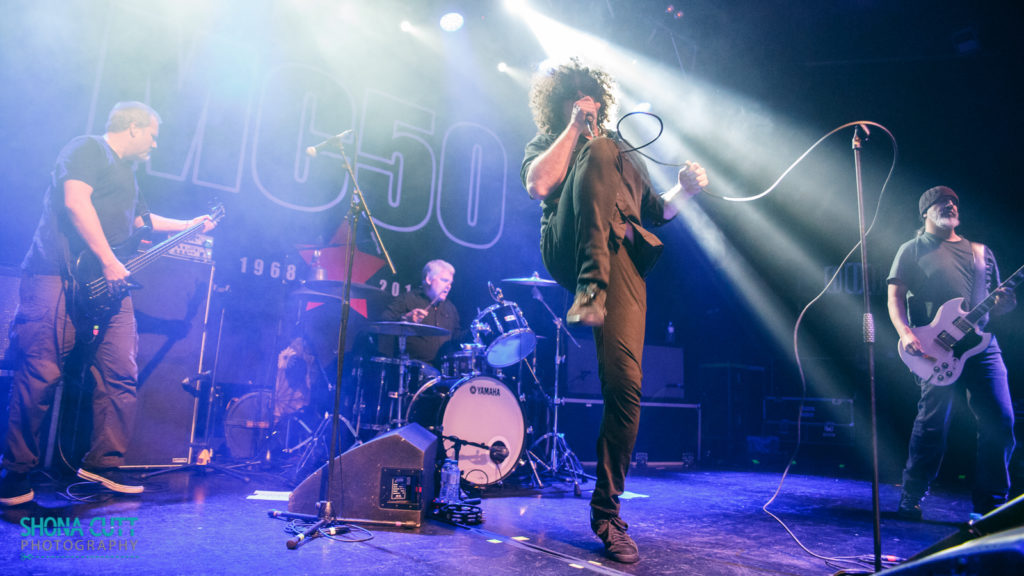 Together with vocalist Marcus Durant, formerly of Zen Guerilla – a shades indoors kinda guy with a mop of unruly Rob Tyner hair – he chants along with the rabble-rousing recorded intro by ‘spiritual advisor’ Brother JC Crawford. Then comes the double-whammy of Ramblin’ Rose and Kick Out the Jams – as powerful an opening as you’ll hear on any live album. 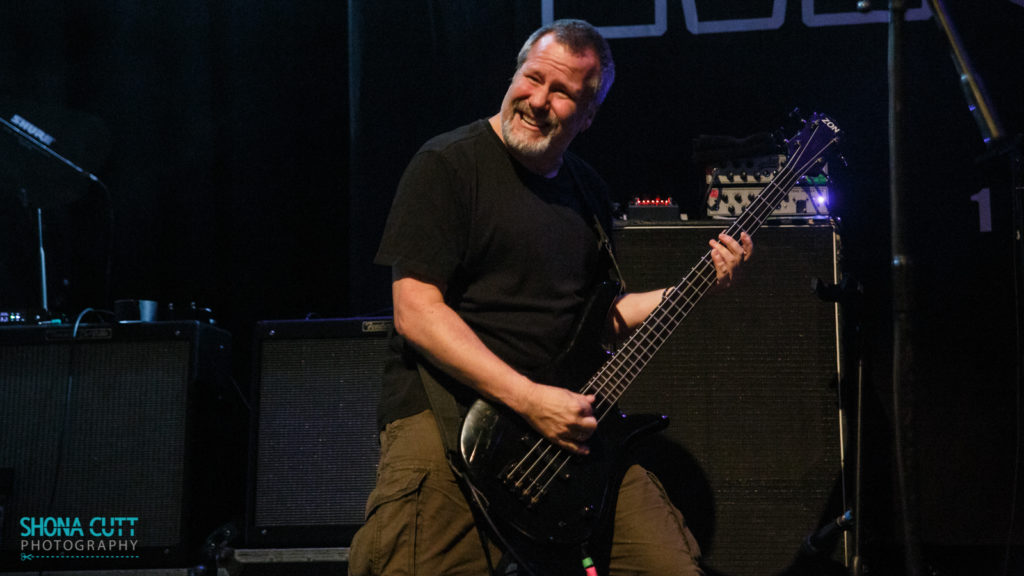 Kramer’s MC50 have been touring this show for a while now in the US, and there’s no trace of the musical sloppiness that one might associate with the chemically enhanced late-sixties. He’s got some impressive blues guitar chops and has the Pete Townshend windmill technique down pat, while the rest of these guys are not only super-tight but also thoroughly enjoying themselves, sporting mile-wide smiles as they live the dream by surpassing the original recordings. Gould and Fugazi drummer Brendan Canty prove to be the best rhythm section the MC5 never had. 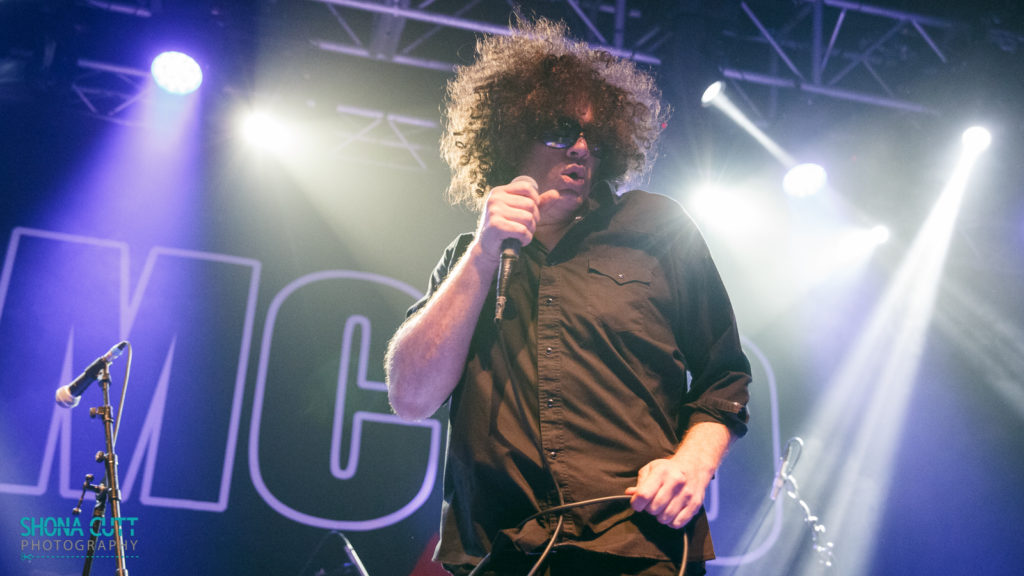 And while this stuff is no stretch for a guitarist of Thayil’s abilities, he resists any temptation to overplay, radiating contentment at being part of the band. A mere callow youth of 50, Durant rocks some slinky stage moves, impresses with his rich soul/gospel baritone and blows up a storm on the harmonica. 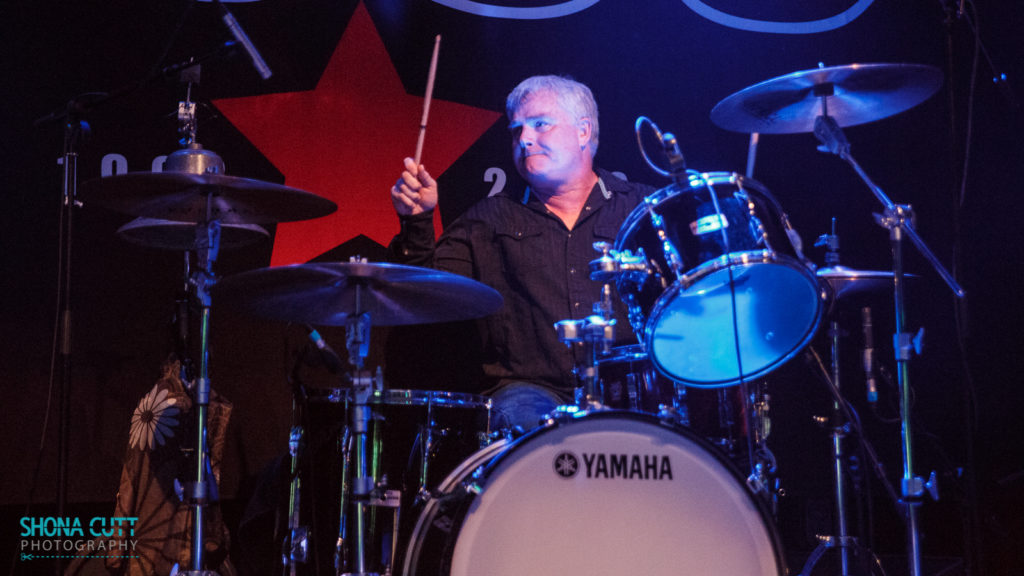 We’re also reminded that the MC5 weren’t just about those three-minute garage anthems that inspired the punks. Starship, the epic Sun Ra co-write that concludes Kick Out the Jams, remains an out-there, jazz-inflected psychedelic treat reminiscent of Gong, Hawkwind (notably those spoken word passages on Warrior on the Edge of Time) and Syd Barrett-era Floyd. 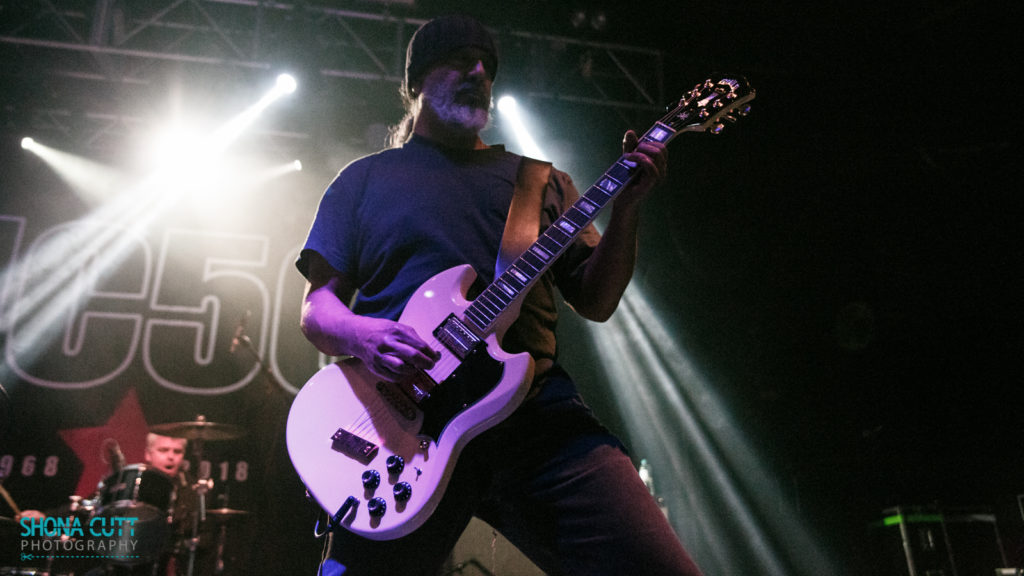 The band’s under-appreciated if occasionally patchy studio albums showcased later in the show also yield some gems, including the rather lovely Shakin’ Street from Back in the USA, for which Kramer straps on an acoustic guitar and everyone pitches in with harmony vocals. Shame, though, they didn’t play the title track and the hard-rockin’ American Ruse, which they’ve apparently been performing back home. 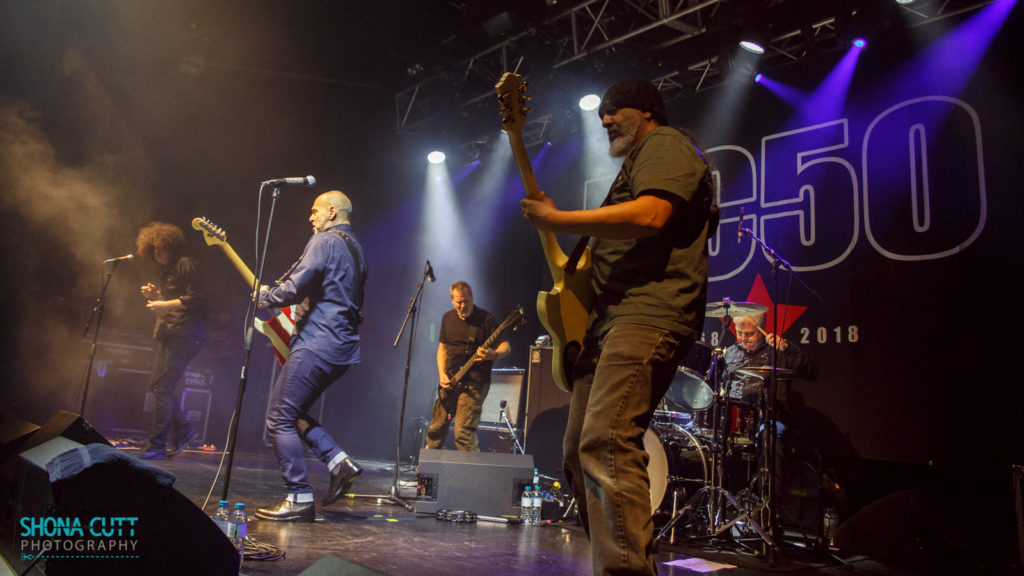 Clearly, there will be sneerers who’ll object to what they see as revolutionary rock repackaged as nostalgia and assert snootily that only the Kick Out the Jams material has any merit. But they weren’t here tonight, so fuck ’em. 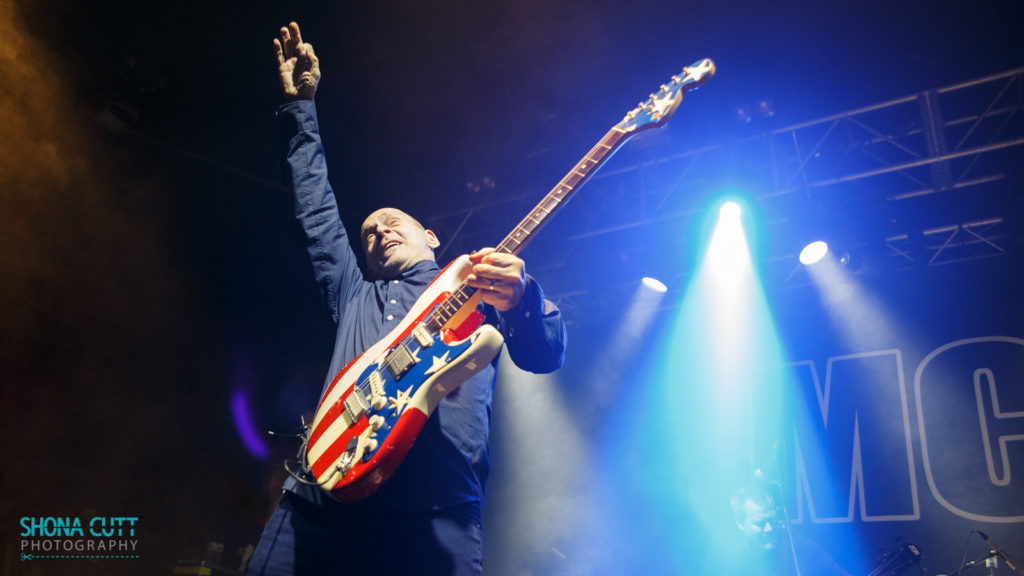 What’s missing? Oh, that’s right: radical politics. Having paid tribute to deceased (Tyner, Fred ‘Sonic’ Smith, Michael Davis) and absent (Dennis Thompson) comrades, Kramer delivers the anticipated broadside at the “fool” in the White House, acknowledging that “things are fucked up right now” and urging us to vote, vote and vote again. (Hey – we’d love to, Wayne, but our government would prefer not to give us the opportunity.) “We’re not gonna let those motherfuckers get away with this shit,” he promises by way of introduction to Looking at You, which closes the show in suitably incendiary style.