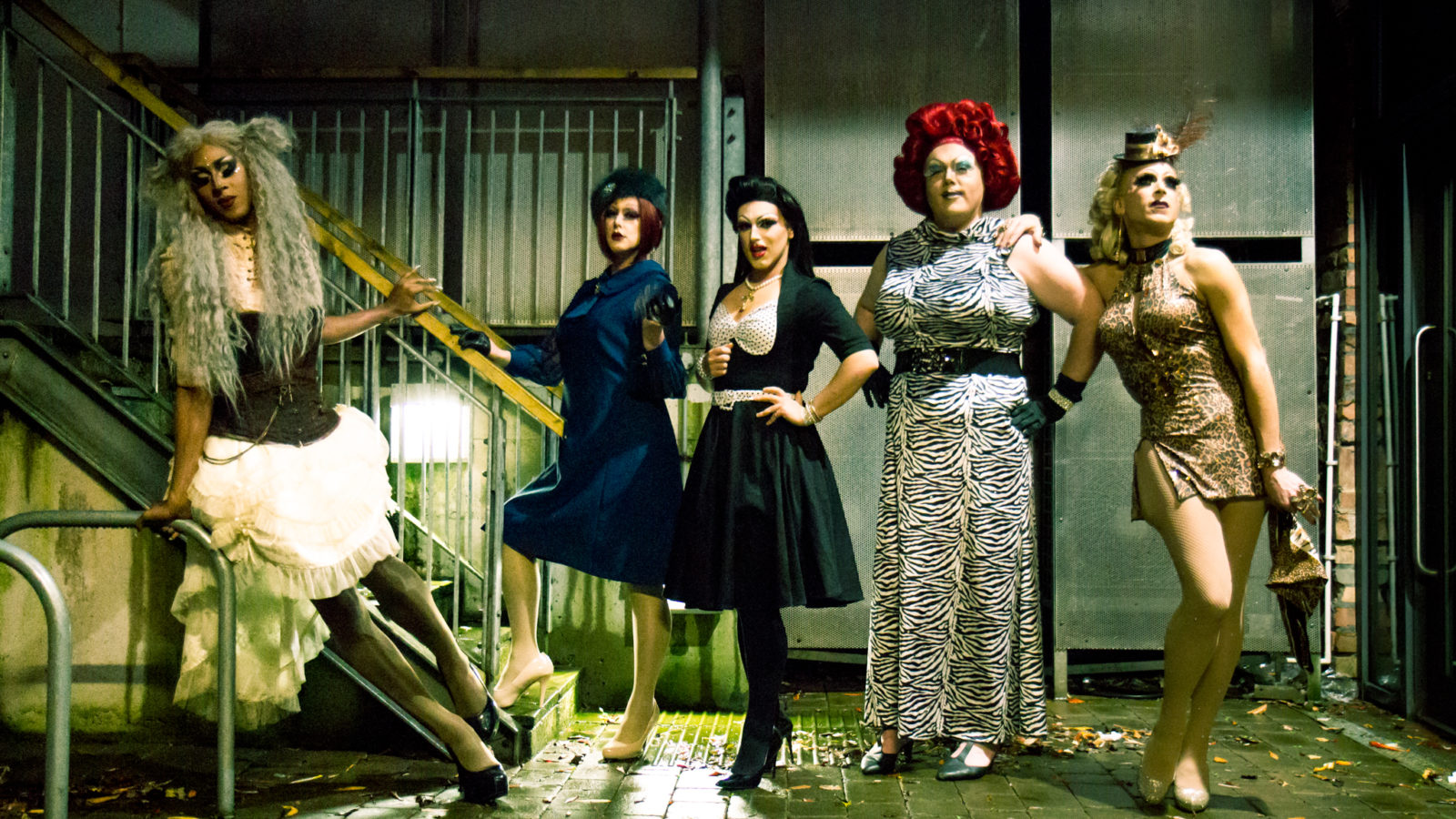 Bristol’s drag scene is growing, with more nights, and visibility of artists at a high after Drag Queen Story Time launched earlier this year. During a photo shoot for Bristol24/7, five of Bristol’s best drag queens share their inspirations, humour, and views on drag. 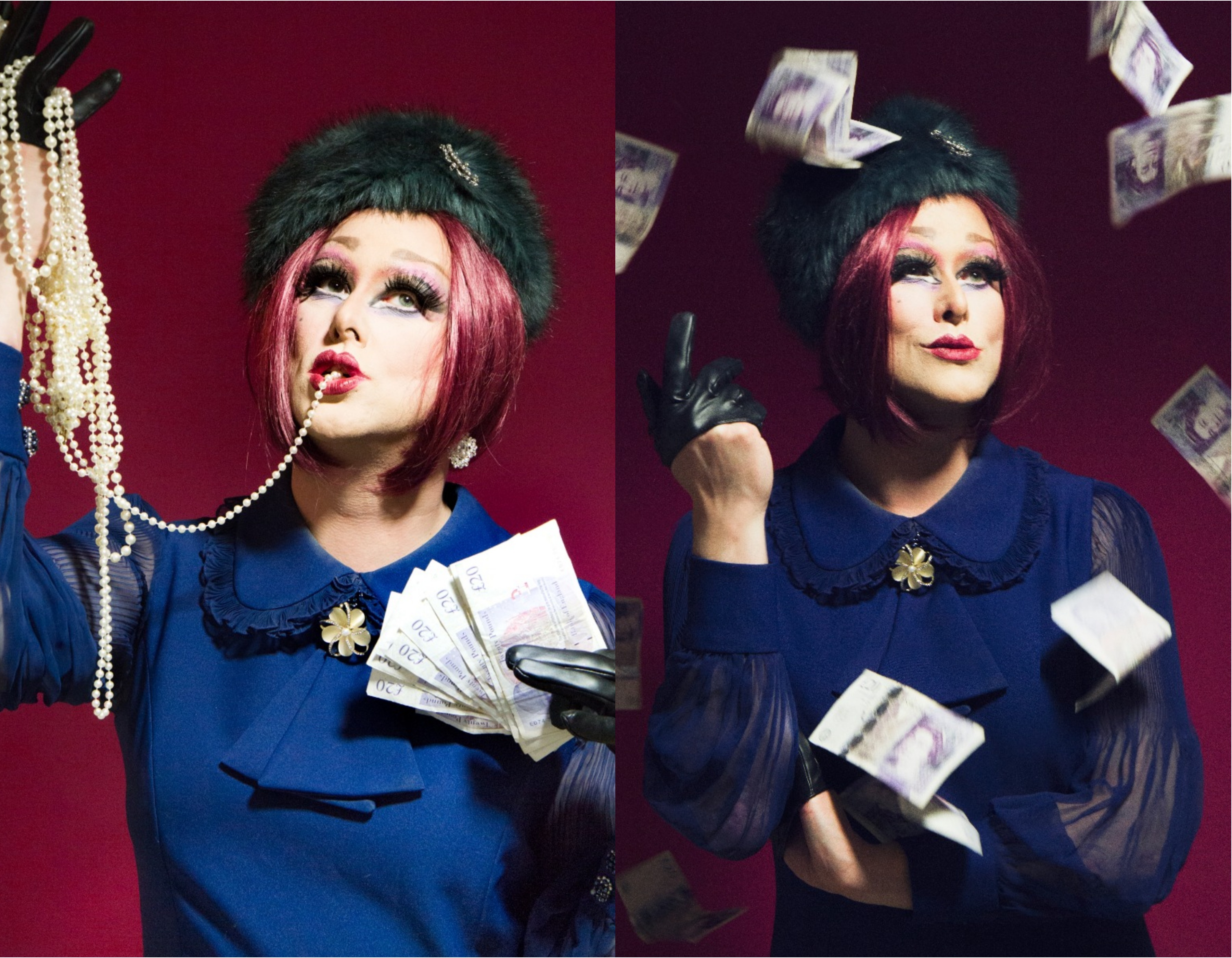 As the queens unpacked their bags, it was clear Lady Windsor Rose had invested more than anyone else as she lay ten £20 notes lay crisply in front of her. With the pearls and the blue dress, it was like a drag-Thatcher had walked in: “My name reflects the affluence and English style that inspires my drag. ‘Lady’ comes from the ‘it’ girls of the 90s like Tara Palmer-Tompkinson and Lady Victoria Hervey.”

“I’m inspired by women that excel,” Lady Windsor says, “I’d love to have the grace of Darcey Bussell, the speed of Whitney Cummings, and the attitude of Bette Midler.”

“I’ve been doing drag five years. As an ex dancer, I wanted a second chance to perform after an injury put paid to my dance career; drag was it. People tell me I’m funny, but I never believe it until I’m on stage. I did a Ladies Night in front of a group of women, many of whom I went to school with. After every joke, they’d fire back with stories of when we were at school together.”

Donna La Mode
She made it ‘Halfway to Heaven’ once, as a semi-finalist in Britain’s Drag Idol. 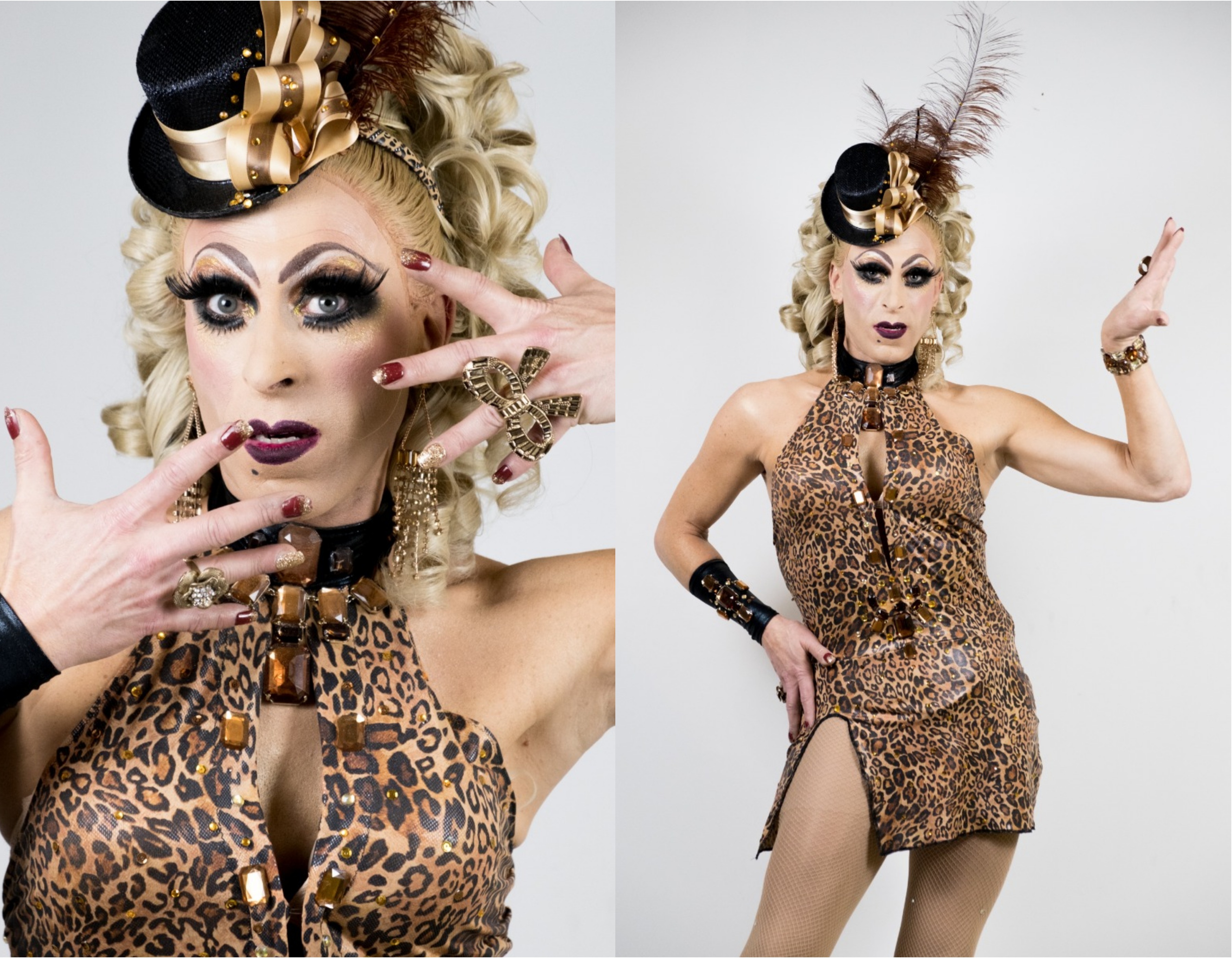 Once upon a time, you’d have found Donna, (well, Colin), on the West End. Drag started thirty years ago, and, even though she will admit to ageing by a few months since then, Donna still finishes ever show with the splits. “One of the most frequent comments I get from women is, ‘why can’t I have legs like you’.”

Drag names often reflect an aesthetic, or a style of humour. Not for Donna. “We have a photograph of my late mother wearing a t-shirt with the name Donna La Mode in jewels and sequins. My mother was always my biggest supporter. My drag name is quite precious to me for that reason.”

Donna was a founding member of Drag Queen Story Time in Bristol and says “performing for children and seeing their reactions and interactions is the most for-filling thing I have ever done in my career and makes me so proud to be part of the LBGT community”.

Alyssa was an accidental drag queen. “My cousin Alberto was an events organiser for various bars and clubs in Sicily and one evening one of his girls didn’t show up, so he bribed me to get on stage. One YouTube video later, I got my first booking in London”. Alyssa is primarily a comedy and cabaret queen, often in character as an Italian mother. Despite her larger than life character, one man got quite caught up in the illusion: “He quite seriously told me he wanted me to have his babies. I shattered that illusion gently.”

“As well as being an art form and a great way to spend a night out, drag is a great platform to inspire people and get people listening. A drag queen can be very powerful.”

“Alyssa is all about the glamour. Big hair and a beat mug (meaning, heavy make-up) all drawn from 20s and 60s Italian style.” Think Sophia Loren, Raffaella Carra and Monica Bellucci, she says.

“Joan Rivers has been one of my greatest inspirations. I was lucky enough to meet her two years before she passed away. She said, ‘You’re funny kid, just make sure anything you do you do it 110% and never give up’.  I’m also inspired greatly by Kathy Griffin.”

Alyssa has recently taken on hosting and directing Bristol’s newest, monthly drag night Category Is… at The Old Market Assembly.

Cherry Poppin
Every show starts with a safety announcement, marking exit routes for the faint-hearted. 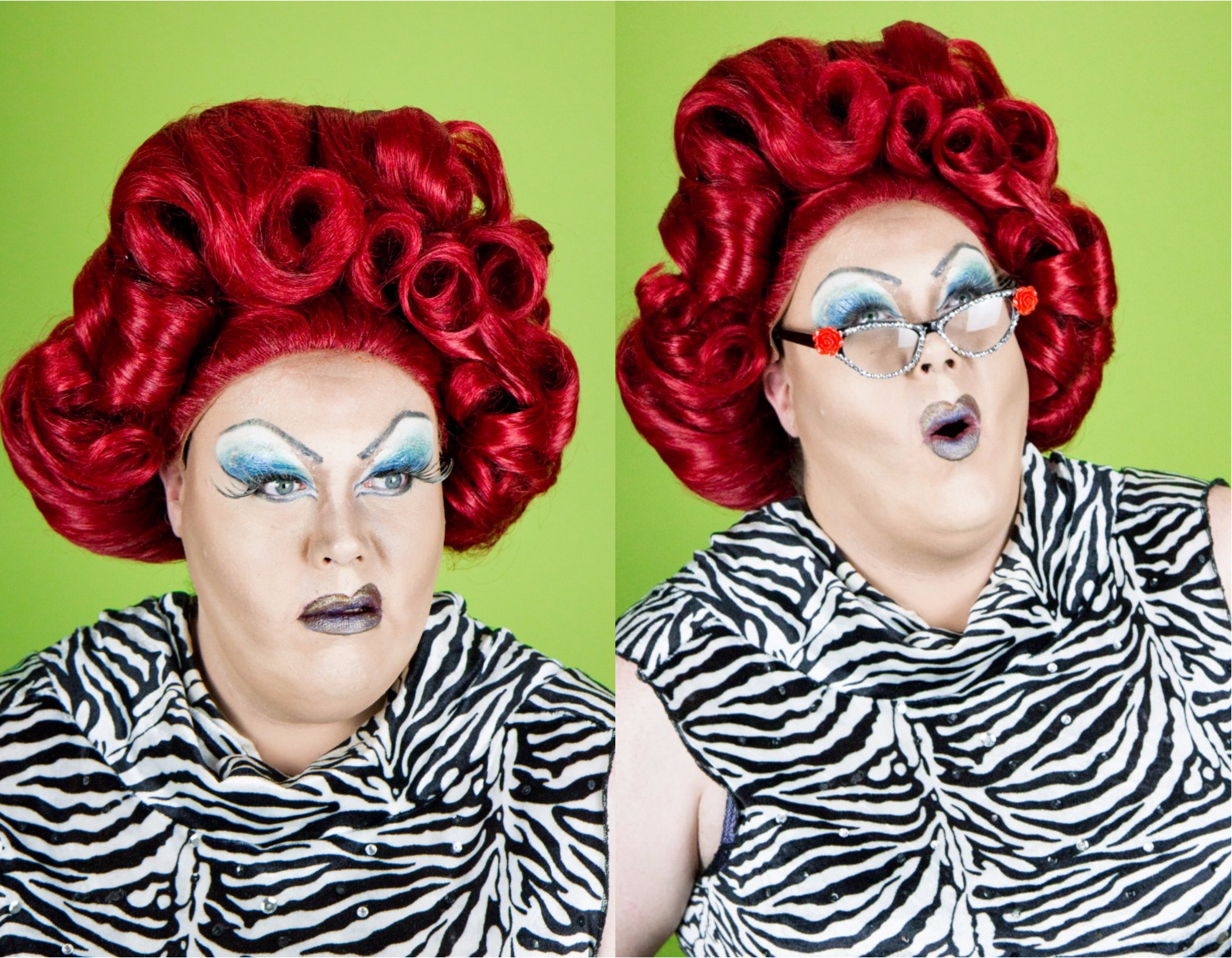 “I LOVE doing ladies nights. At a show this year we had a lady in her 50’s strip off her dress in one go, like a tear away, and join the strippers in her bra and pants. Working with strippers has its perks and if you can get enough of their baby oil on you, it’s great for taking your make up off”. Meeting Cherry is force of nature. She has the mouth of Jo Brand in her risqué days.

“I’m a panto dame, crossed with an old school Madam from the Wild West. I am a cock in a frock.”

Drag started for Cherry in 2006 having been in panto. She then got a place in a cabaret academy run by Dave Lynn (Beautiful Thing, Faking It, Eastenders). In 2008, she made it to the final of Drag Idol, only to, in her words “lose to a girl whose talent was eating polo mints”.

“As much as I love and watch RuPaul’s Drag Race – and adore some of the queens like Bianca Del Rio, Jinxx Monsoon, and Katya – it seems that young boys thinks that as long as you can walk in a pair of heels and slap some Dulux on, you can get paid. Walking is not a talent. It’s all about ENTERTAINMENT.”

Carmen Monoxide
A hyper-feminine anime witch, straight out of a comic book. 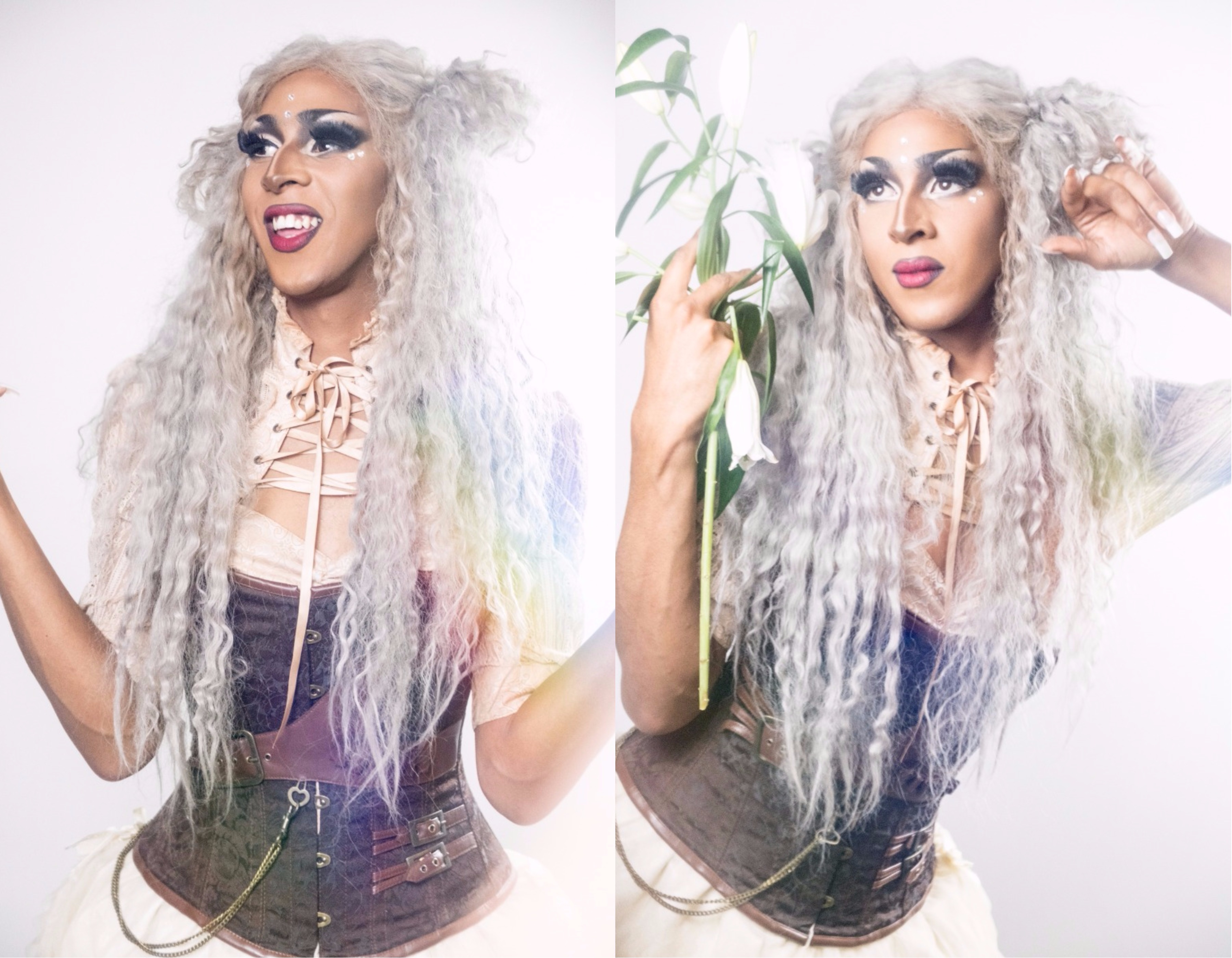 “I know it’s weird but I’m really inspired by Roger the alien from American Dad. He’s theatrical, irreverent, with a ridiculously detailed different backstory every episode. Britney and Ariana because I grew up a pop princess. And Grace Jones, she’s everything.” Carmen is a singer and produces her own music. Right from the earliest age, Carmen used to draw mermaids, anime characters and red-carpet gowns. “I suppose, something’s always been driving me to drag,” she says.

Carmen says Bristol’s drag scene needs reinvigorating. “It’s difficult for new talent to emerge. A few of us are taking it into our own hands and building up a scene with various events like Gurt Lash, Bitch, Please!, and cabaret stage at Boomtown. But we need a watering hole.” How does she do her hair? “Braid it and dip it in off-the boil water to create waves, curls or afro.”

“Being a drag queen spurs me on to keep reaching higher. Nobody can hold you down and your makeup is almost like a coat of armour, allowing you to be the best, natural version of yourself because you feel safe enough.”

Photography by Charley Williams. Check out Charley’s work online, on Facebook, and on Instagram.
Charley is a Bristol-based event and portrait photographer currently working on a project exploring the rise of Bristol’s drag queens.