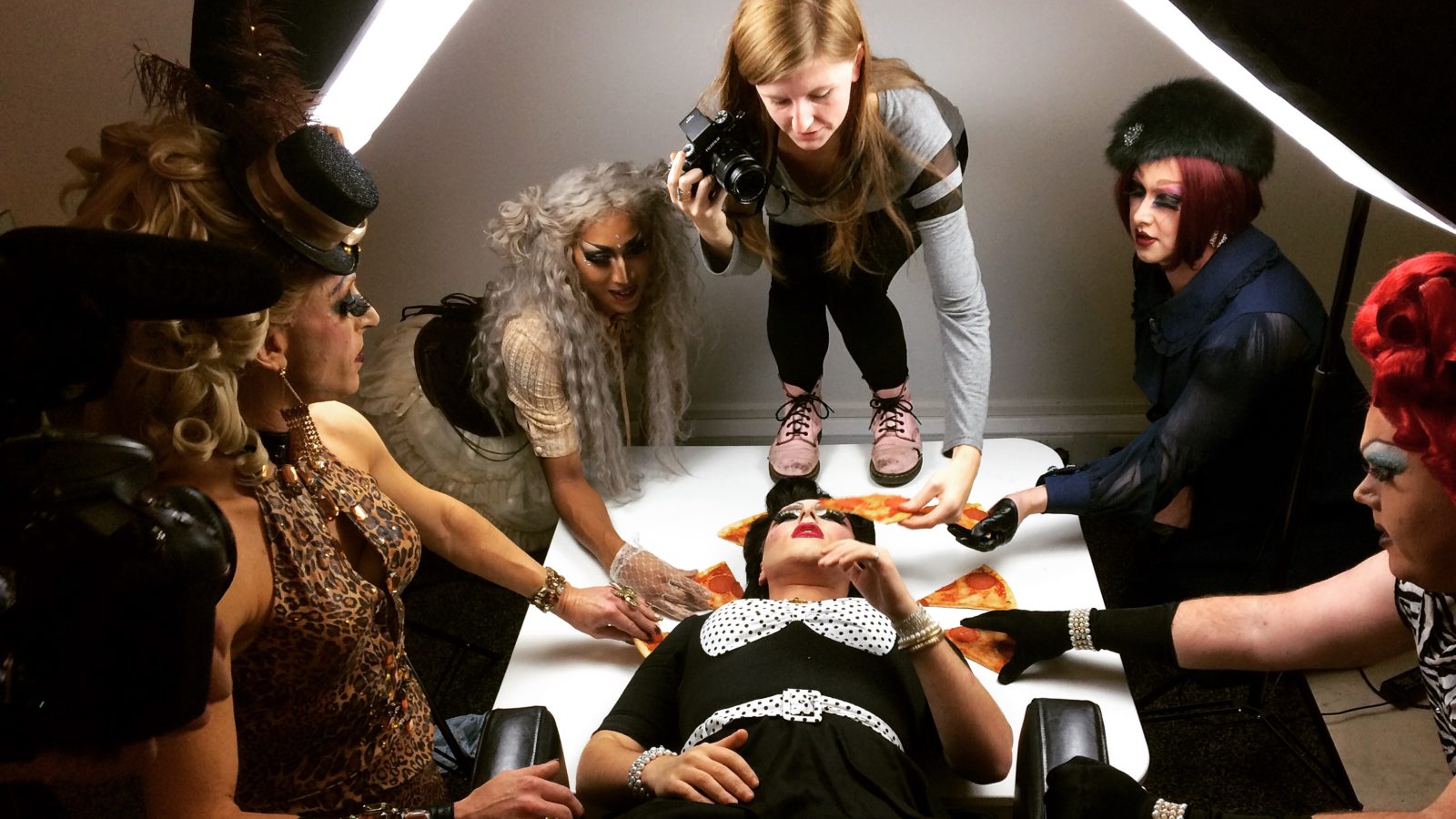 Visibility of drag in the city is at a high, with more regular nights, and the nationally-famous Drag Queen Story Time (which launched earlier this year), providing a platform for local performers. This December, Bristol24/7 profile five of Bristol’s best drag queens.

With five queens, two hours, and the deserted Bristol24/7 office, photographer Charley Williams considers the improvisation, cold pizza, and drizzle that went in to capturing the stunning shots, including a behind-the-scenes video.

“I had no idea what I wanted to do after I graduated,” explains Charley, “it threw me into a depression for a year, until I realised I was miserable because I had stopped taking photos. I had friends who were blossoming into queens. Since then I have been completely fascinated by the opportunities the subject of drag offers.” 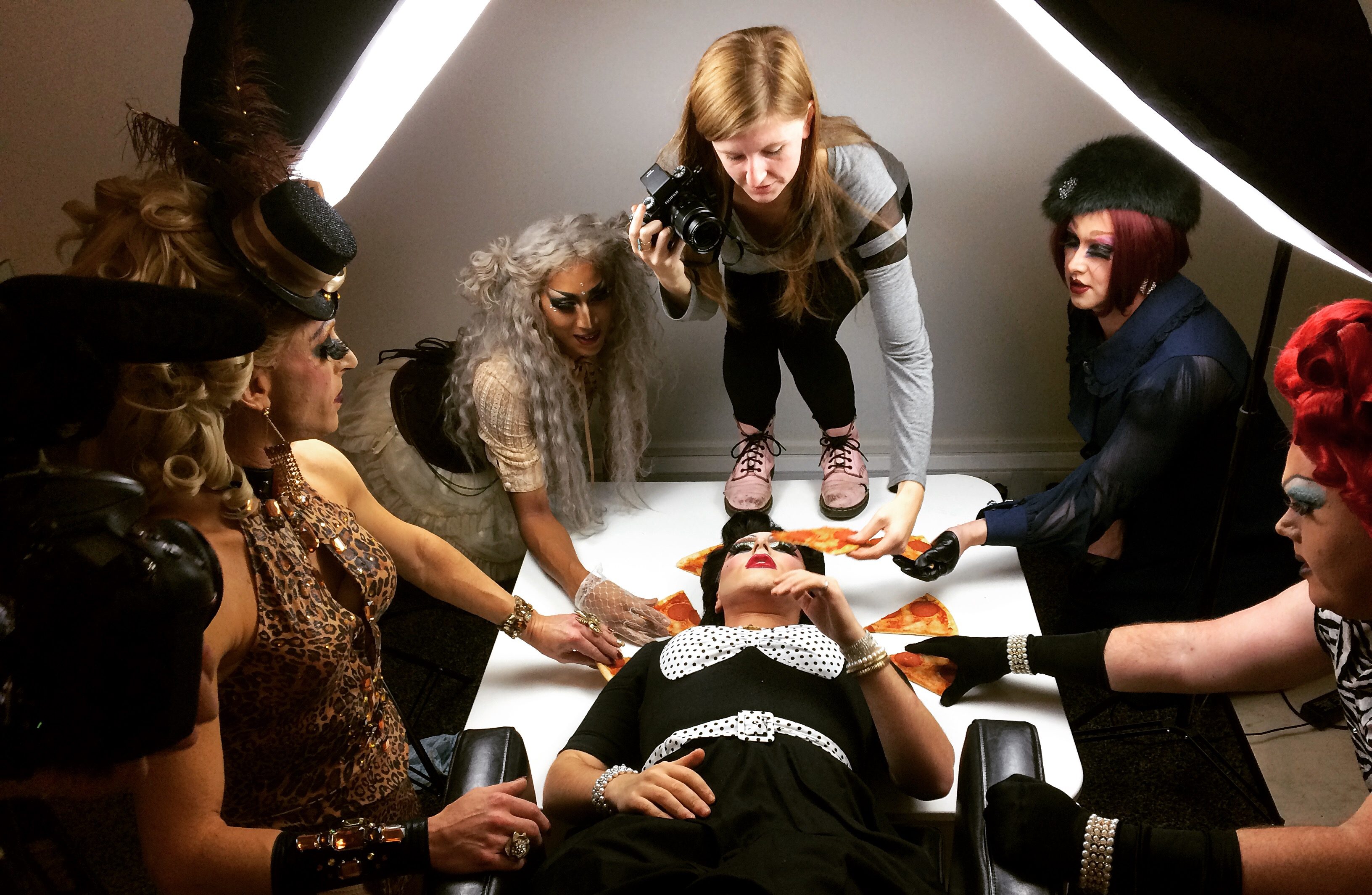 The queens gather for a group shot

But, an office-space didn’t make Charley’s job easy: “Photographing Alyssa lying down was a challenge to light and shoot, when I was literally standing over her. But the result, screams catholic and Italian, and that’s exactly what we were going for”. 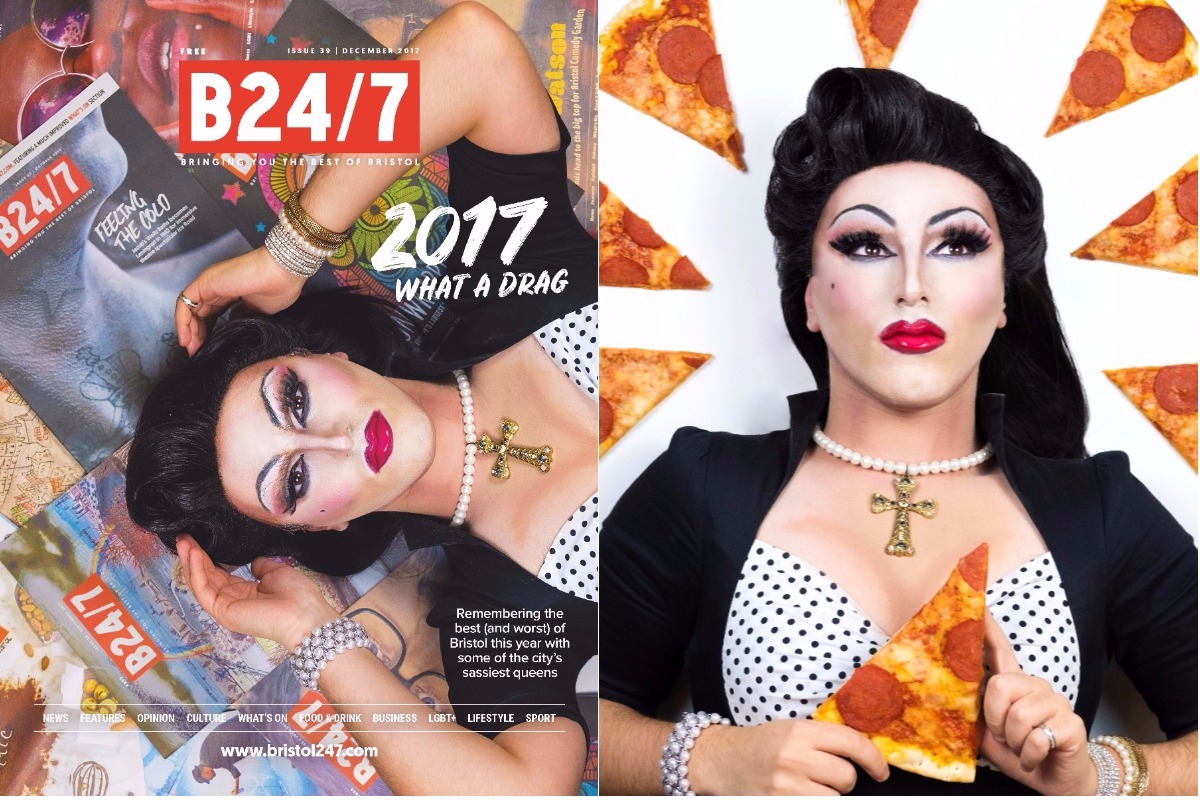 Explaining her favourite photo, Charley says: “We didn’t use the shot, but it’s Donna La Mode in half drag. Sometimes when shooting drag portraits, I will ask them to let me photograph them when they are halfway through the transformation. It’s part of a personal project to explore the boundary between a person and their alter-ego”. 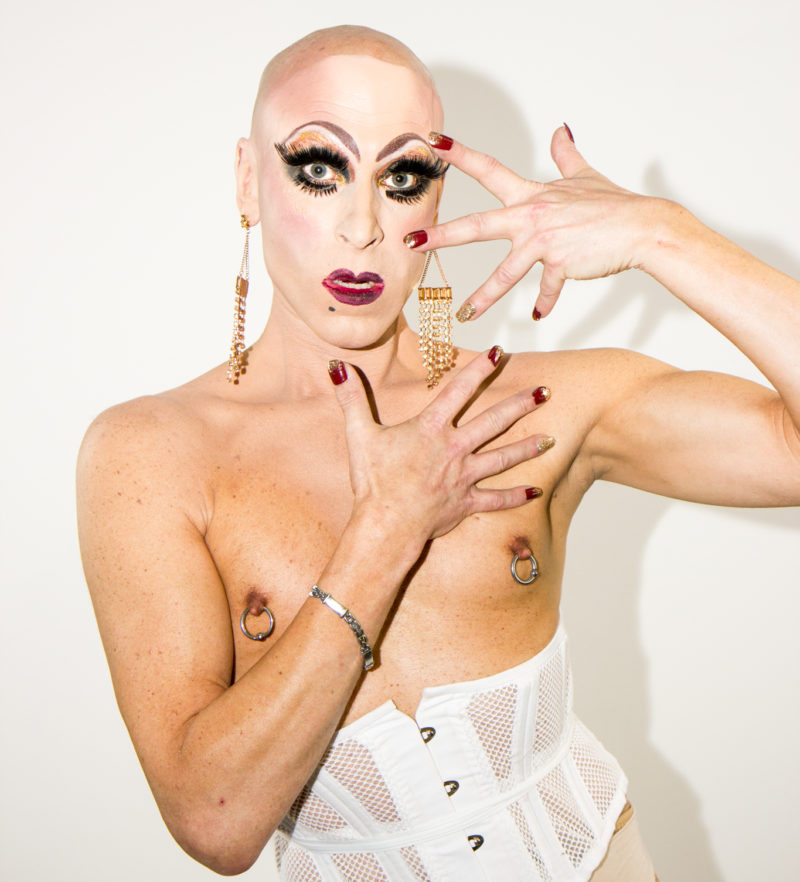 “When I first saw the photos,” Donna explains, “I was blow away by how my glamour, personality and true essence were captured in my photographs. As an ageing queen I never thought I could ever look so good.” 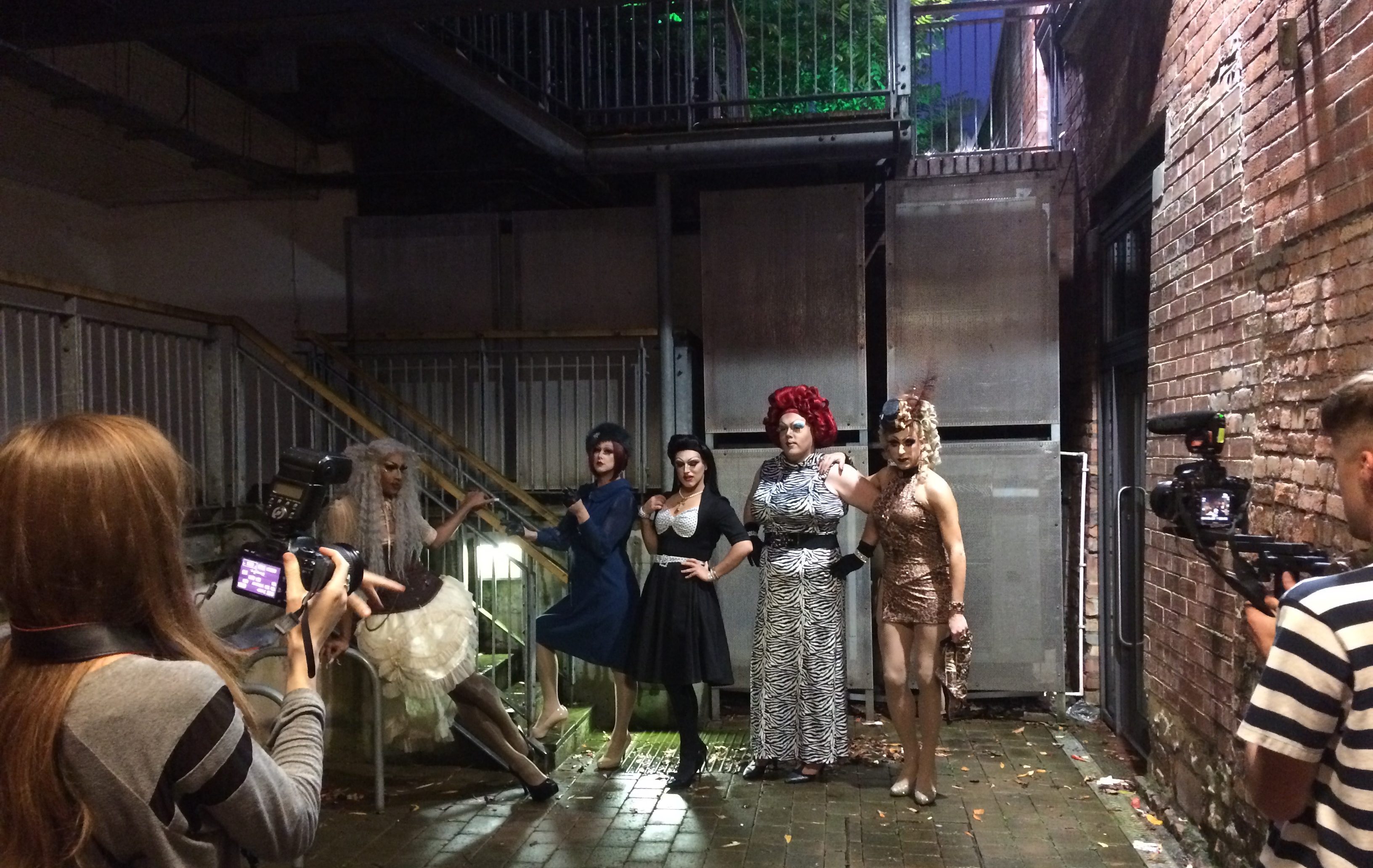 “When I came in with the £20 pound notes,” Lady Windsor Rose says, “it was because I was planning on getting them changed into Euros for my trip abroad. But, Charley had an ingenious idea to use them. What I got was these gorgeous photos and really capturing the opulence of party girl of times gone by.”

Cherry was as succinct as always in explaining her photos: “Charley knew just how to get the best out of me: Greggs”. 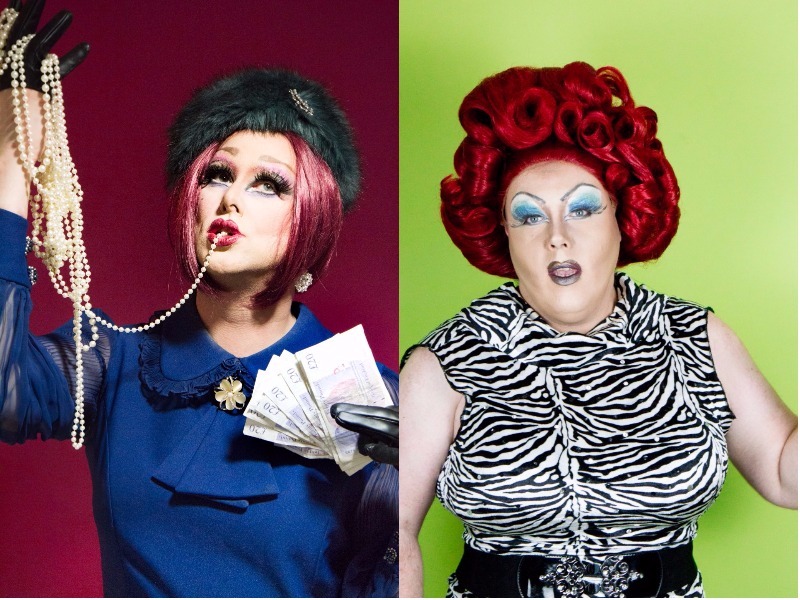 Drag in Bristol will remain Charley’s passion: “I’m currently working to expand on my portfolio of drag queens to include non-binary individuals. I’m looking for drag kings, queens, club kids, performers, eccentrics and queer people from all walks of life. It’s an open call for anyone who wants to get involved”.

Music used in behind-the-scenes video: ‘Erase’ by Sean Delahay. Check out Sean’s work on Facebook, and on Soundcloud. Sean’s music is available to download at Beatport.

Read more: “It’s hot, painful, itchy, expensive, and the most liberating thing you can do”