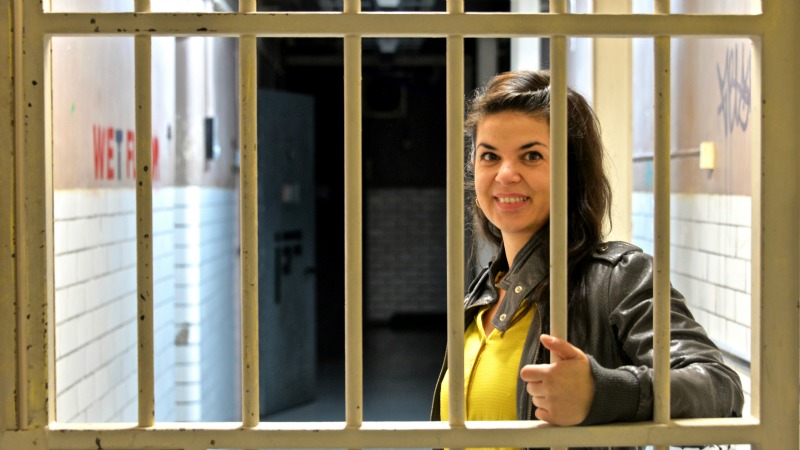 “Working in a Grade II listed building has its charms and unique features, as well as its challenges. But we feel very lucky to have this wonderful, unique space – both a base for our many resident artists, and as a fascinating venue for site-specific work.”

This is Dina Ntziora, Project Manager at The Island – the studio complex, arts facility and events space based at Broadmead’s Old Bridewell Police Station – enthusing about her uniquely atmospheric workplace.

Dina Nitziora outside The Island. All pics: Doug Jewell

Events range from live art to electronic music, experimental nights to theatre, cinema to markets and pop-up food events – not to mention daily dance and circus classes open to all levels. However, The Island’s most distinctive feature is underground: a sprawling complex of early 20th-century police cells that form the backdrop to numerous gigs, micro-festivals and transgressive arts performances.

Built in 1928 on a triangular patch of land known as Bridewell Island, the building opened as Bristol Central Police Station in 1930, alongside the old fire station next door, serving as the city’s main police station for 75 years. Since its closure in 2005 (with the Avon and Somerset police HQ moving to the nearby New Bridewell), little physical evidence of the police days has remained – although the basement’s records room still contains rows of filing cabinets with titles such as ‘Murder Cases, Bristol, Unsolved, 1975.’

In 2007, the complex was taken over by Artspace Lifespace and their associates The Invisible Circus: and the latter soon put The Island, as it was now known, on the map with their groundbreaking, 1000+ capacity circus/promenade shows such as Carny Ville.

Meanwhile, the former fire station next door came under the ownership of the Creative Youth Network, who have transformed the space into The Station – a youth centre and café, several dance and music studios, plus a range of creative support services for young people. The CYN currently owns The Island as well, and are negotiating with Dina and the Island team for the latter’s potential long-term lease of the space.

Fire and circus performer Violetta Pickle training at The Island

The Island’s former police offices are now artist’s studios: the subterranean former cells have been transformed into a live art, music and performance space like no other. Says Dina: “It adds to the atmosphere of the place, knowing that a previously oppressive environment is now a hub for creativity, community, education and partnership. Our small fringe collective has evolved into a major support network, constantly striving to support artists from every discipline, and all walks of life.”

Celia Arias, one of The Island’s many resident artists, in her studio

The calendar is always busy, from classes and workshops to performance, site-specific gigs and club nights to exhibitions and performance events. February events for the diary include a two-day rope masterclass with internationally renowned circus artist Emiliano Ron (Feb 27-28); a gig from lauded electro artist FunkinEven in the old prison cells on Feb 12 and, on Feb 20, a Minotaur Sound launch party featuring a debut UK set from Berlin-based DJ Illy Noize.

Dina beside some of The Island’s all-pervasive street art

The Island’s mission, Dina explains, is to provide Bristol’s creative community with access to the spaces, logistics and support it needs – and to foster diverse and vibrant projects. “As part of the wider Artspace Lifespace company, we believe that rejuvenating physical space, together with mentoring and facilitating local talent, transforms neighbourhoods and brings fresh, diverse elements to commercial centres. These spaces serve as resource bases for smaller satellite projects, allowing other creative groups and organisations to flourish on their own.

“We believe that temporary use and re-use of abandoned land and buildings can help create dynamic and resilient places in and around our towns and cities. And the transformation of a former police station is a perfect example of that!”

Find a full rundown of forthcoming Island events at www.theislandbristol.com

All photos by Doug Jewell