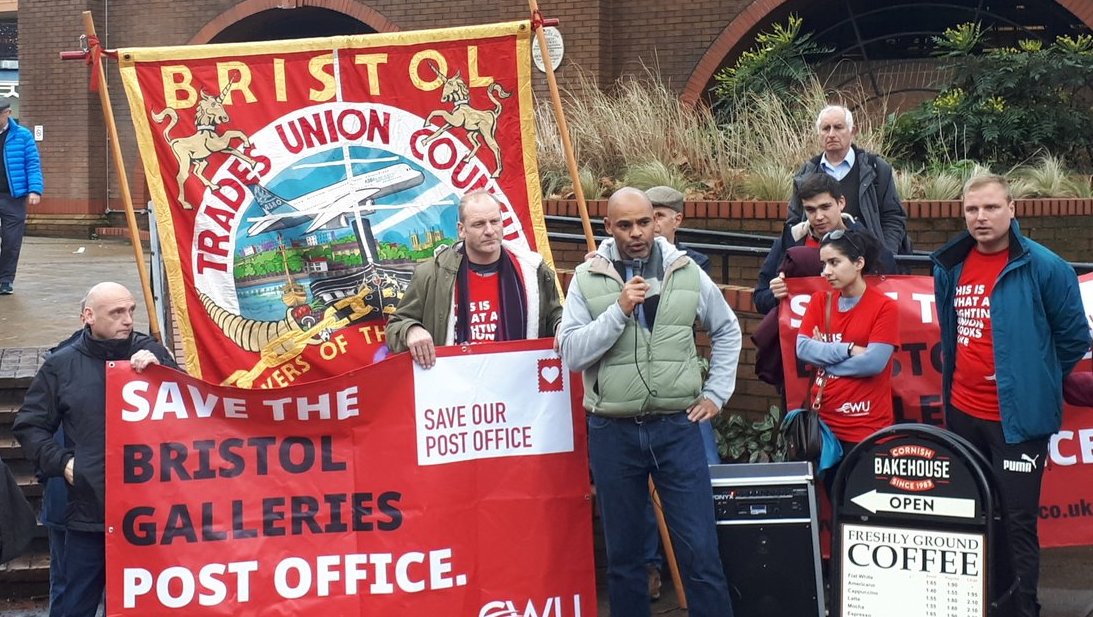 The Galleries post office, Bristol’s last Crown Post Office and the largest in the South West, is under unprecedented threat.

Five years ago, the Tories and Lib Dems separated the Post Office and Royal Mail. They then sold off the Royal Mail on the cheap, with the National Audit Office estimating that Cameron, Clegg and co’s undervaluation saw the taxpayer lose out on some £750m in just one day.

These privatisations have also seen £13m of public money used to get rid of Post Office staff. The bill to close the current Galleries location, and the other 74 Crown Post Offices also threatened by current proposals, is estimated to be at least £30m.

Franchising plans would see the Post Office shrunk and moved inside WH Smith, a move which both Citizens Advice and Consumer Focus warn against given issues including poor accessibility for people with mobility impairments, longer queuing times, and inferior service and advice on products.

It would also mean the loss of good jobs with decent terms and conditions, with experienced Post Office staff likely to be replaced with what are typically minimum wage part-time roles.

At a time when Bristol City Council has secured Living Wage status for paying the real Living Wage of £9 per hour to all staff and contractors, thanks to mayor Marvin Rees and the Human Resources committee which I chaired, this is clearly at odds with the city we are building.

With high streets and town centres under historic pressure, despite millions being invested in Bristol regeneration, there has been no explanation of why the profit-making Crown Post Offices are being handed out to a retailer with an uncertain future.

The post office is a major anchor store for the Galleries, bringing high footfall into the shopping centre, while WH Smith appears to be closing its outlets elsewhere.

The Post Office recently decided against opening a new branch on Prince Street, also in the city centre, which I represent, so confidence is not inspired in the future provision of such crucial services.

Bristol has seen post offices closing, despite the best efforts of the campaigning Communications Workers Union (CWU) and your local Labour councillors.

Colleagues in St George and Redfield were able to work with local Labour MPs to find a new location when one on Church Road closed, after mustering a huge number of signatures from local residents.

I hope that our campaign to save the post office in the Galleries is as successful, but that needs Bristolians to rally together once again to save this important public asset.

The short public consultation has closed yesterday, but I would encourage everyone to sign this petition to save our Broadmead post office.

Kye Dudd is the Labour councillor for Central ward and a member of the CWU. He also serves as the cabinet member for energy, waste, regulatory services and sport.