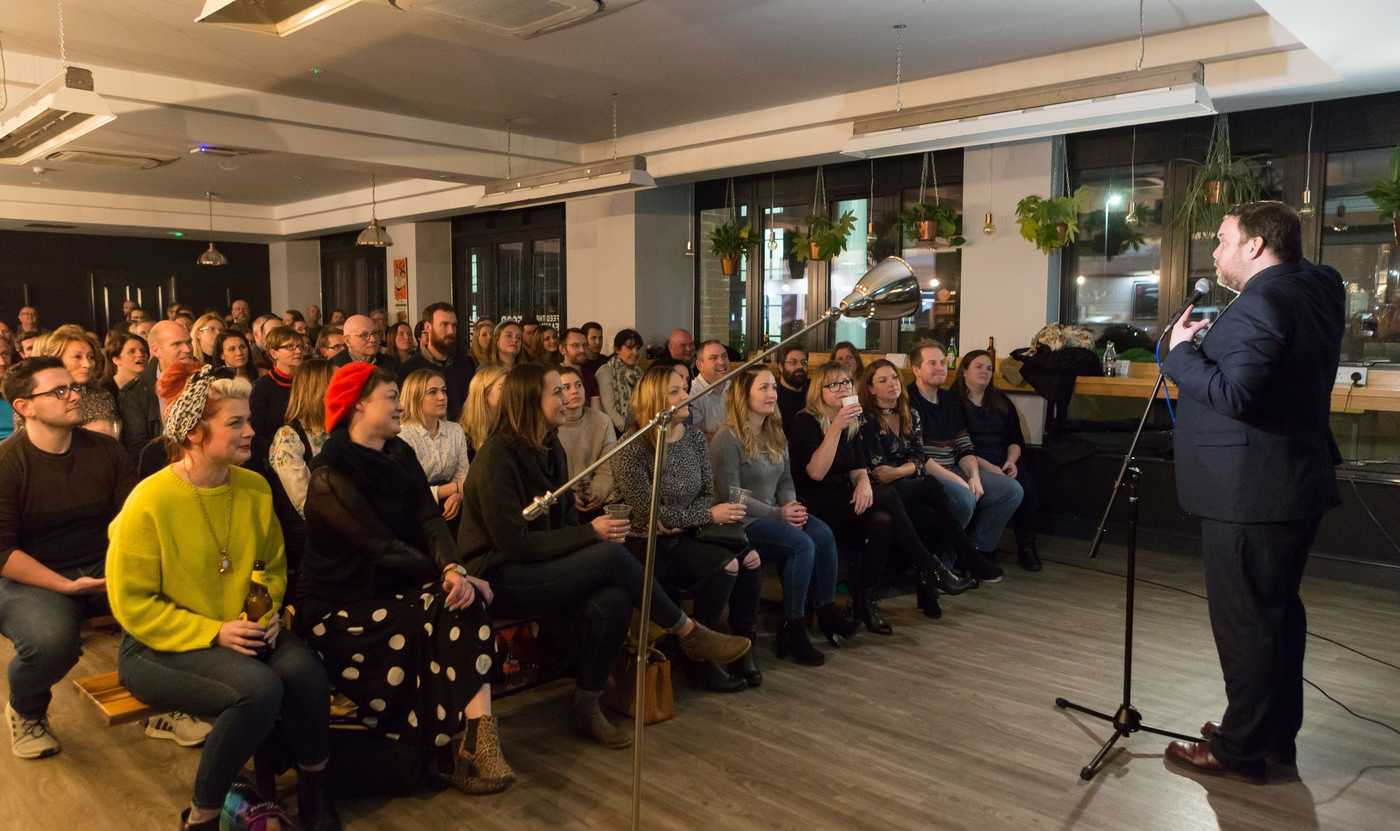 After noticing January was a quiet period for both restaurants and for his comedian friends, Mark Olver started Belly Laughs to showcase the city’s food and comedy talent.

For its third annual outing, Bristol24/7 are excited to announce our role as media partner for 2020’s Belly Laughs.

We are excited to not only support local businesses and comedians, but also encourage social action in Bristol, with profits from ticket sales going to The Julian Trust, a homeless charity.

Belly Laughs with Bristol24/7 will see big-name as well as less-known comedians perform in nearly a dozen food and drink locations in and around Bristol.

The event will not only increase footfall for food businesses at a traditionally quiet time of year but ticket sales will also support The Julian Trust, which runs an emergency night shelter on Little Bishop Street in St Paul’s for homeless people and rough sleepers. 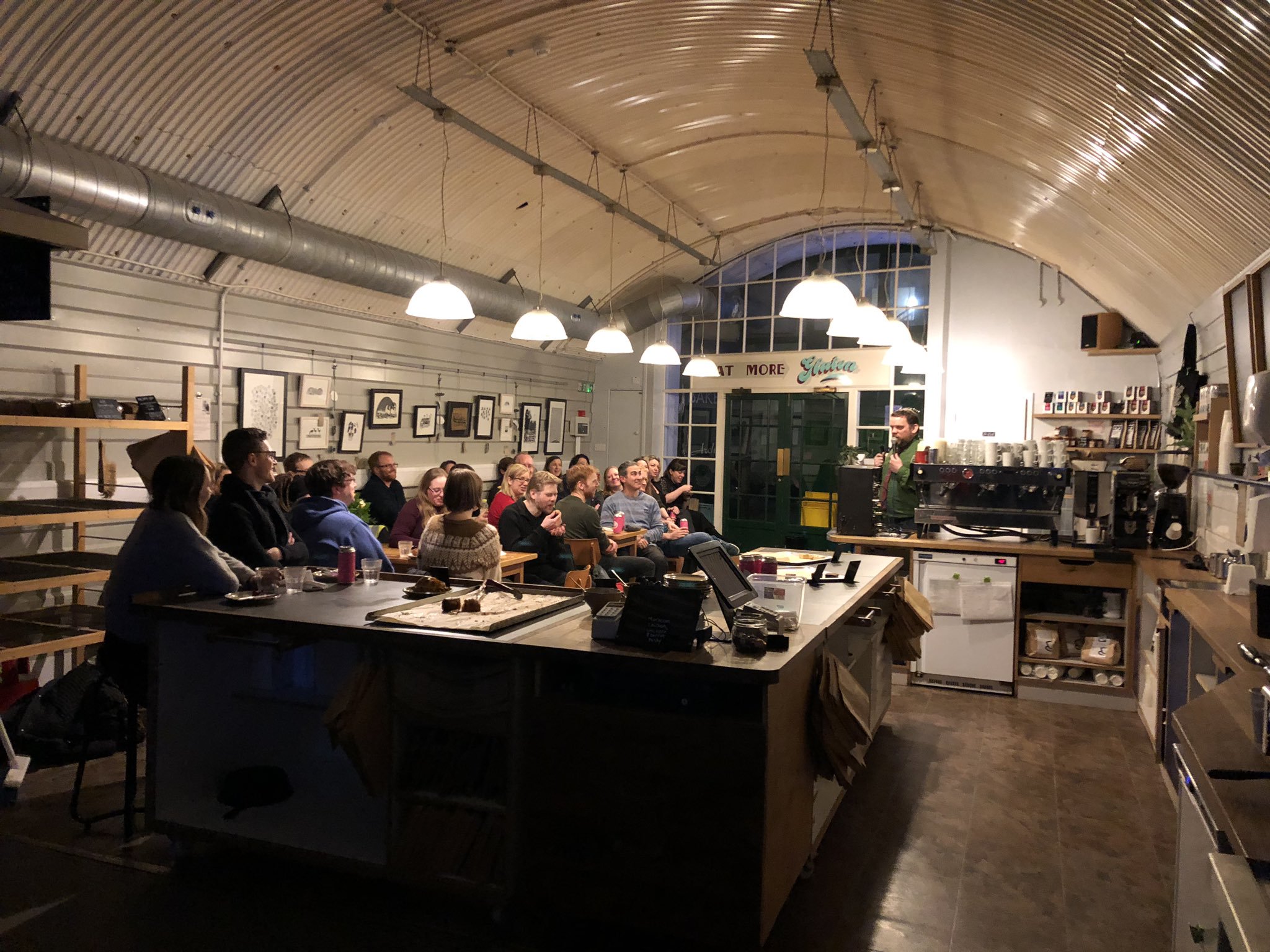 Hart’s Bakery is one of the confirmed venues for 2020

Audience members will book tickets without knowing who is billed to perform. Thirteen venues are currently confirmed, including Hart’s Bakery near Temple Meads and Bean Tree Cafe in Staple Hill.

Most tickets will include not only a night of top-quality comedy, but a meal as well. More dates will be confirmed in the coming weeks.

Taking place during the evening between January 8 and January 27, see more details below:

For the first time, Tapestry Brewery are excited to be taking part in Belly Laughs. They will be dishing up homemade pizzas and their own delicious beers while comedians perform.

Belly Laughs returns to the The Elephant House in Bedminster for a second year. Catering megastars Bosh will be cooking up a vegan curry storm so come hungry.

We’re excited to have Belly Laughs back at Pinkmans for the third year in a row. They’ll be cooking up a storm with mezze and of course, a sourdoughnut to munch down on whilst we provide the entertainment with some great comedians!

For the first time but hopefully not the last, we’re excited to be bringing Belly Laughs to Gloucester Road with an evening of delicious plant-based food and comedy at Suncraft.

We’re excited to be partnering with coworking space Runway East to bring you a night of Belly Laughs! Food will be provided by local, sustainable experts Wilde Kitchen so expect sharing platters, loaded sandwiches, cheese boards and other goodies, all locally sourced and beautifully crafted. Plus, get the night started in style with an energising nitro espresso martini on arrival from local, ethical coffee brand TrueStart Coffee.

Please contact hello@gingeybites.com with any dietary requirements at time of booking.

The following shows are now sold out:

Enjoy Spanish tapas and wine at Pata Negra. Included in the £20 ticket is a selection of 4 pintxos and a portion of patatas bravas. Pintxos are Pata Negra’s Spanish equivalent of canapés and four delicious options (three of which are vegetarian) will be served.

Severnshed is located on the Harbourside and sits within Brunel’s 1843 boathouse. Belly Laughs’ returns for the second year for a meat or veggie Sunday roast and dessert. Tickets are £22.50.

Pouring the the worlds best beer since 2013, Small Bar love to support independent business and local causes. Along with Wing’s Diner, who make the best chicken in the south west, they’re excited to host this night of food, beer and laughs.

The Kensington Arms in Redland brings you an evening of comedy paired with that classic pub meal – a burger, fries and pint. All to raise money for The Julian Trust Homeless Shelter.

A firm Bristol favourite for relaxed dining and drinking, Bambalan is the perfect space for an evening of comedy with the award nominated Belly Laughs. A £20 ticket includes Ticket includes a classic cheese burger, chicken bab or falafel bab and fries and a drink (choice of beer, cider, small wine or something soft).

Enjoy the intimate atmosphere at Gopal’s Curry Shack with delicious vegan food and excellent comedy. Bring your own booze and tuck into a ‘Fully Monkey’ plate and prepare to laugh.

Please not there are two gigs taking place on the same evening at Gopal’s Curry Shack, only the 8.30pm show now has tickets available.

As part of the grand Belly Laughs evening at Wapping Wharf, Woky Ko Kaiju will be rolling out their ramen and beer, accompanied by a live comedian.

A well established favourite in Wapping Wharf, Cargo Cantina is excited to be joining up with Belly Laughs to bring you a night of comedy to raise money for The Julian Trust Homeless Shelter. Arrive early and eat with us before the comedy starts at 8.15pm.

Spanish tapas bar Gambas is excited to be joining up with Belly Laughs to bring you a night of comedy to raise money for The Julian Trust Homeless Shelter. Arrive early and eat with us before the comedy starts at 8.15pm.

Housed in The Old Gaol Stables, Bertha’s Pizza is one of the larger Wapping Wharf venues. Dough is their focus, and toppings on their sourdough bases range from the classics to those lead by seasonal local ingredients and homemade ferments. Any pizza is included in a ticket, which costs £18.

Grano Kitchen and Bean Tree Cafe will bring you an evening of pizza and comedy. Included in the ticket price is one pizza and salad per guest (margherita or marinara). Tickets are £15.

Bristol Spirit and Naasto Baasto to bring you an evening of delicious cocktails, gujurati food and comedy for £15 a ticket.

The award nominated Belly Laughs is teaming up with popular Mexican cantina Masa + Mezcal for an evening of comedy and delicious food to raise money for The Julian Trust Homeless Shelter.

An evening of homemade pastries, pies, cakes and comedy. Included in the ticket price of £15 are savoury and sweet snacks – bring your own drinks.

For the third year in a row, award-winning BBlock is pleased to be partnering with Belly Laughs for an evening of tasty rustic pizza and comedy. Pizza and salad are included. Tickets are £25.

Bringing something a little bit special, this intimate evening will combine three courses of deliciously seasonal and locally sourced food with wine and comedy.

SOLD OUT – Belly Laughs at City of Bristol College with Squeezed: Burgers and comedy, 6-9pm, January 23

In a Belly Laughs first, we’re going back to college. Alex Hayes of the mighty Squeezed and some of the college’s culinary students at will be dishing up his signature burgers alongside a helping of comedy. Included in the ticket price is a Squeezed burger (beef or vegetarian), side and dessert.

For the first time, Belly Laughs will head to The Cauldron, one of Bristol’s most exciting restaurants. Enjoy three courses of seasonal fare cooked in wood-fired ovens and fire pits with excellent comedy on the side. Tickets are £35, with vegan, veggie and meat options available.

Little Victories, sister venue of Small Street Espresso, is teaming up with Belly Laughs and Encounters Film Festival for an evening of comedy on screen. The programme will showcase hilarious short films drawn from the festival’s 25 year history, presenting a bumper buffet of films about food from a smorgasbord of famous faces, alongside a live MC. The venue is donating the ticket price, plus 50 per cent of their bar take and snack sales to The Julian Trust. Tickets include entry, and a drink. Bar snacks and additional drinks available to purchase on the night.

Seven Lucky Gods is part of Belly Laughs for the first time – but certainly not the last. Arrive early and eat before the comedy or order food and drinks during the event itself. Tickets are £10 and do not include food.

Pigsty is excited to be part of the Belly Laughs Wapping Wharf extravaganza. Included in the ticket price is a pigmac and skin on chips.

As part of the Belly Laughs Wapping Wharf extravaganza, The Pickled Brisket will be running this year’s most intimate gig, with just eight seats available. Enjoy the Cargo grilled cheese whilst comedians entertain you.

This comedy night teams up with the North Bristol RFC and included in the ticket price of £17 is a burger, pulled pork roll or a vegetarian option and chips.

We’re excited to have Belly Laughs making its debut at that classic Bristol institution Pieminister! They’ll be in charge of pies and we’ll be in charge of the belly laughs. Ticket includes: the Mothership which is a pie of your choice on a pile of buttery mash with minty mushy peas, crispy shallots, cheese & gravy.

Read more: Comedians take over Wapping Wharf for one night only