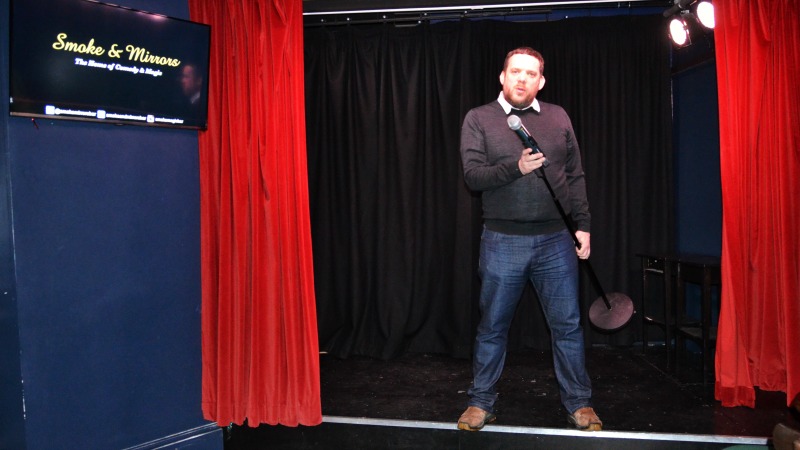 Mark Olver has been performing and promoting comedy in Bristol since 1998. Part of a golden generation of Bristol comics (and housemates) alongside Russell Howard, Jon Richardson and John Robins, Mark created and (for 10 years) ran the popular Oppo Comedy nights.
He’s now the audience warm-up comic for Deal or No Deal, filmed here in Bristol. Mark’s latest venture is the weekly new-material night A Bunch of Japes, at Smoke and Mirrors pub and magic theatre in the centre of town.

How did the Bunch of Japes series come into being?
Oddly, it’s actually the location of the first gig I ran, when it was The Bunch of Grapes. When Mark the owner contacted me I wasn’t planning on running a new gig – but when I saw the room I couldn’t stop myself. It is such a perfect room for trying out new material: small, cosy and brilliantly set up.

What do the nights aim to provide, for both comedians and audiences?
Comics can try out brand new material without fear, and audiences can come and see very famous comedians trying out very new ideas for very little money. We’ve already had Jon Richardson, Russell Howard and Alan Carr: we’re also providing a space for the best local acts to work on new stuff.

How have you seen Bristol’s comedy scene change?
I started doing stand-up in late 1998 and began running a few little gigs the following year. Mainly as places where me and Russell, then Richardson, Robins and many others could have hometown gigs. Then we started booking our friends, plus other comics who started at the same time (Jimmy Carr, Daniel Kitson, Mark Watson). And this just continues. Good comics like doing good gigs, and most people who do well have snuck through Bristol, and slept on my sofa bed or in my mum and dad’s spare room.

How’s the current Bristol scene looking?
Good. The Comedy Box in Bedminster is amazing, and Bath’s Komedia is excellent. There are lots of new acts, some with real potential. If I could buy shares in humans I’d definitely take a bit each of George Rigden, George Erlanger and Jack Heal.
Alice Matthews’ Comedy Combo at The Cube, Chuckle Busters at The Wardrobe Theatre and Black Hole Comedy at The Little Black Box all foster inclusivity and a positive, comfortable environment for everyone and anyone.

Who’s coming up at A Bunch of Japes, then?
On 9 March we’ve got Charlie Baker and Adam Hess. Adam is a joke machine: I’d be surprised if he doesn’t get nominated for newcomer in Edinburgh this year. The following Monday (16 March) we have Nathan Caton and Ivo Graham, an amazing pairing. The week after, it’s two more very fine comics, Angela Barnes and former street performer Stuart Goldsmith.

Tell us a little about your other life on Deal or No Deal…
Deal is important to me: a regular warm-up gig ten minutes from my house! Stand-up is a fairly solitary vocation, and so having a proper family team at Deal keeps me sane.
My other life at the moment is Speech Bubble, a radio project I am working on with local BBC and Radio 4. I took the idea to them: it’s essentially the spoken word/comedy equivalent of [music talent discovery show] BBC Introducing. We’ve already made two programmes, and will be recording another two this month at Smoke and Mirrors.

For all forthcoming Bunch of Japes line-ups, visit www.smokeandmirrorsbar.co.uk