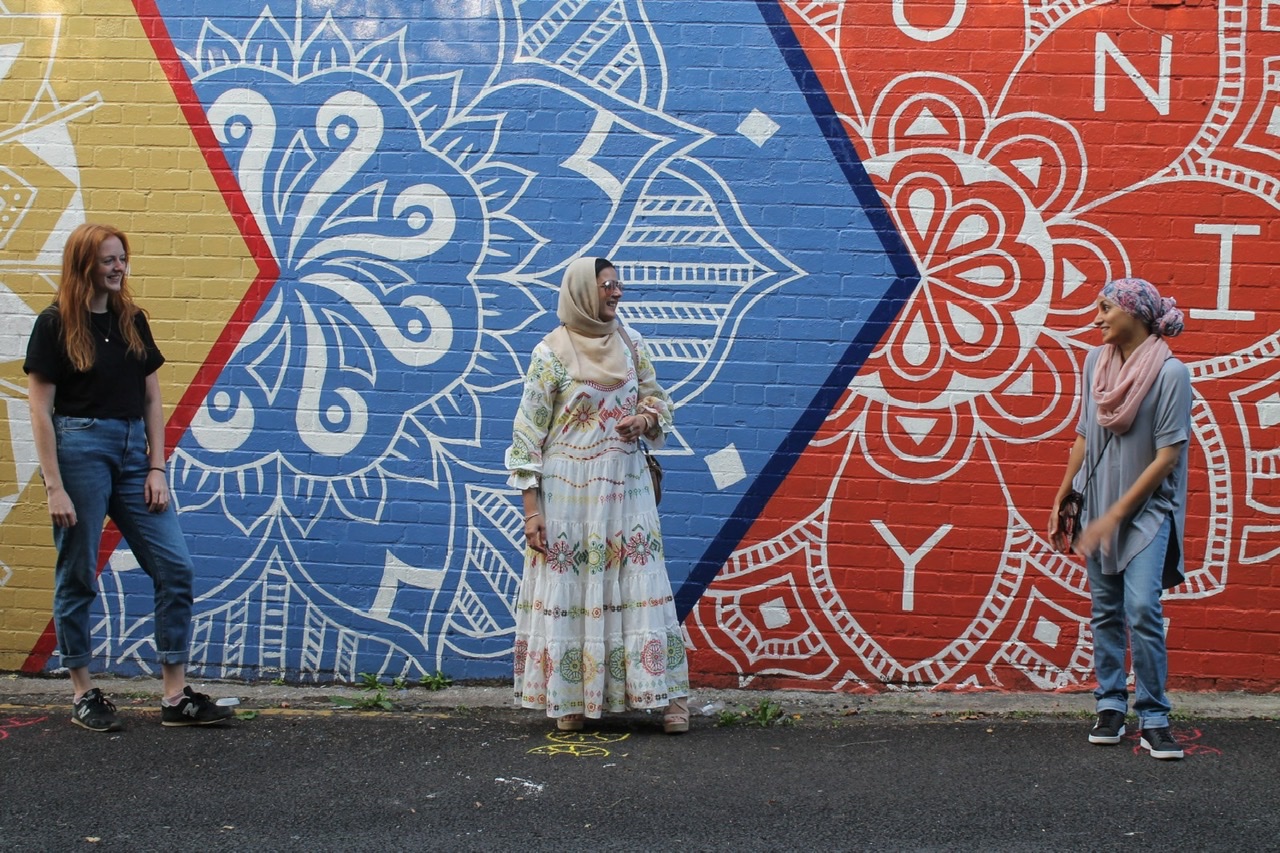 Three vibrant new artworks have been unveiled at the gateway to Stapleton Road railway station.

The pair of murals and a set of gates are the creation of women living within the local neighbourhood, putting a spotlight on both established and emerging talent.

The works were originally intended to be revealed to a procession of people at Easton’s annual Grand Iftar but were instead presented at a socially distanced gathering.

As you enter the station from the main entrance on Stapleton Road, you are greeted by new gates containing hidden mandalas. These were designed and made by blacksmith and metal fabricator Mary Reynolds, who reshapes steel to make art that is both practical and aesthetically pleasing.

“I was delighted to be selected as one of the artists involved in revamping Stapleton Road railway station,” Mary says. “It’s not every day I get to use plenty of colour in my designs. I thoroughly enjoyed collaborating on this urban art project.” 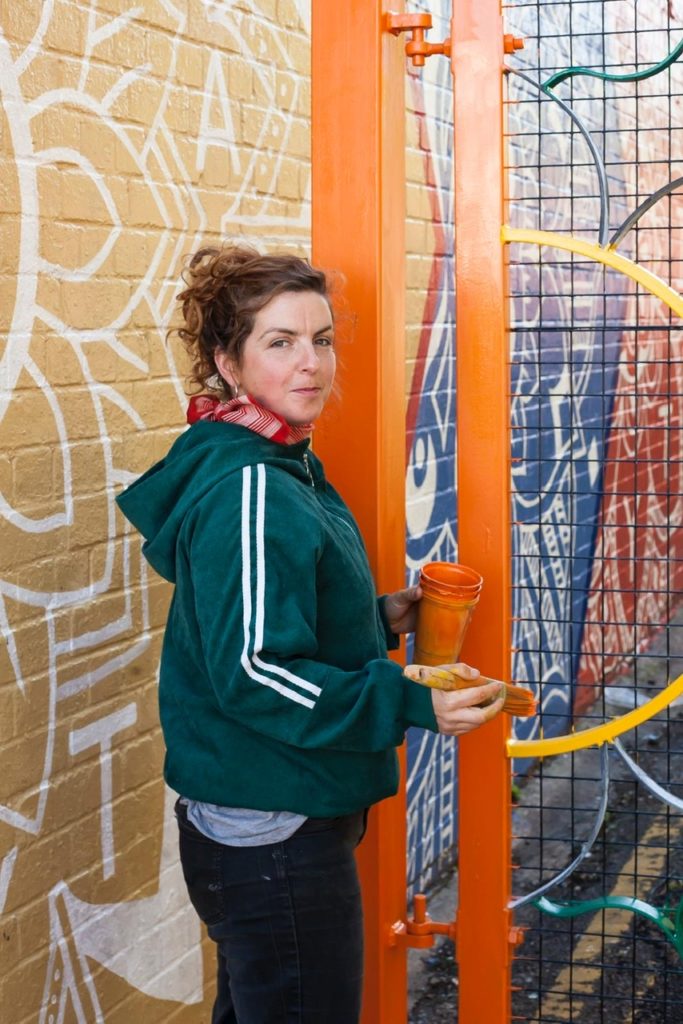 Blacksmith Mary Reynolds paints the mandala-inspired gates at the station entrance that she created. Photo by @ascendphotographicinsta

Adjacent to the gates, mural artists Peace of Art have painted a mandala design on one of the walls. The all-women group is run by Baggator in Easton.

Aumairah Hassan, who forms part of the group, says that, for her, the mandala symbolises unity because of the diversity of cultures and religions who have used the symbol throughout history.

“Having lived in Easton all my life, it was really exciting to be part of Stapleton Road station’s journey of improvements,” Aumairah says. “They really were needed and I think that each individual piece of artwork that we have all created has captured the vibrancy of the area.

“I’m thrilled that Peace of Art were able to be part of this all-female art scheme. Supporting and encouraging women in art is something we as a group try to do ourselves, so we are really very appreciative of the opportunity we were given.” 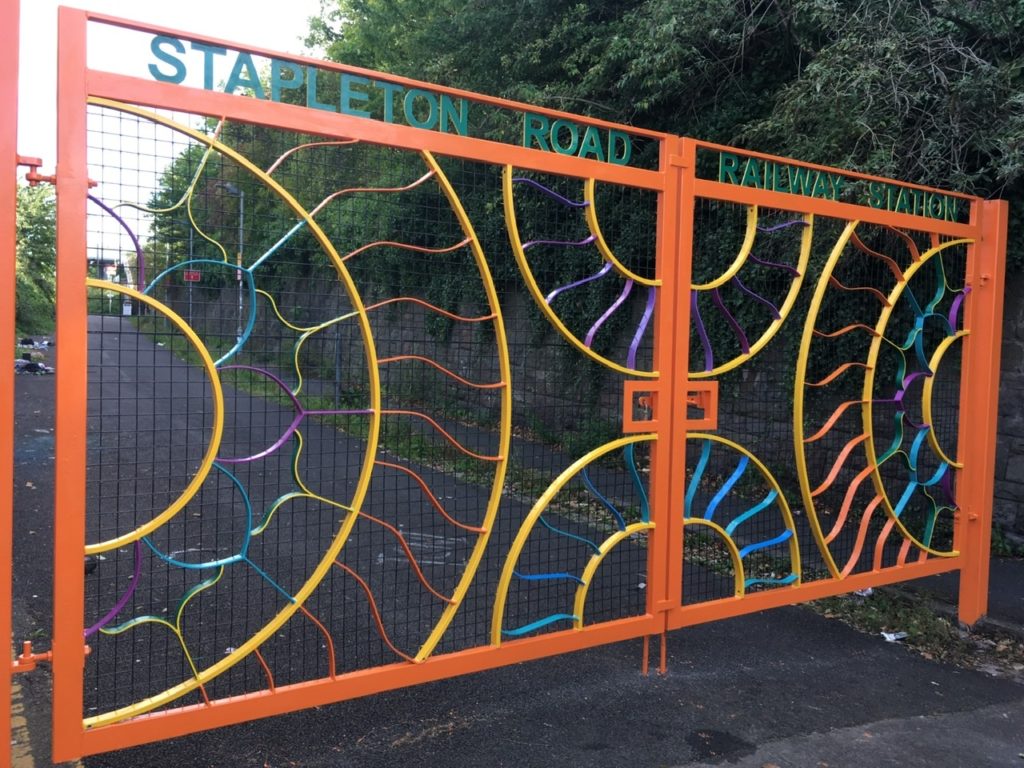 The new gates have brightened up the entrance to the station. Photo by Mary Reynolds

Further into the station, a shipping container once covered in graffiti has received a complete makeover by Anna Higgie. Her eye-catching mural signposts passengers arriving by train to the plethora of independent shops, cafes and places of interest along St Mark’s Road and Stapleton Road.

Anna has incorporated imagery and shapes found in the landscape around the station and local area into her design. The centrepiece, a beautiful butterfly, provides the perfect photo opportunity for those who like to record their outings on social media platforms. 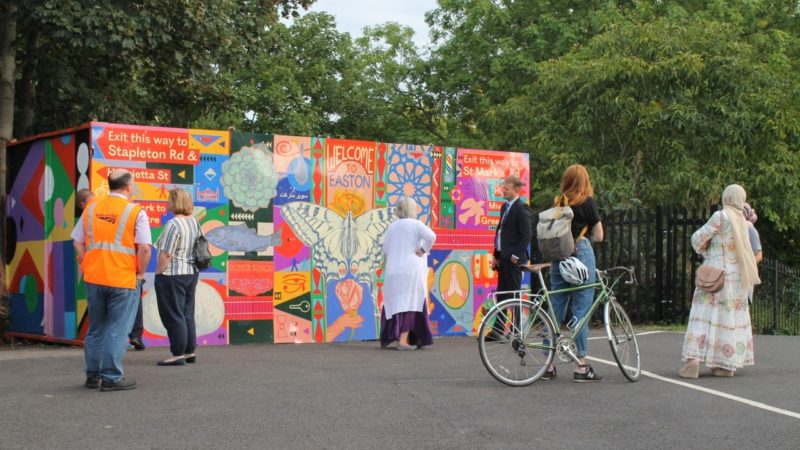 Anna Higgie’s colourful mural signposts travellers to all that Easton has to offer. Photo by Faye Keane

The art schemes were initiated by the Severnside Community Rail Partnership. They are part of planned improvements to an area of Network Rail land, between the entrances to the station on St Mark’s Road and Stapleton Road. The project has been funded by a Bristol City Council Community Infrastructure Levy (CIL) grant.

After the successful funding bid, a steering group was formed to collaboratively select the artists and designs. The group was made up of 12 members, including local councillors, residents, community representatives, and members of Network Rail, GWR, and the Severnside Community Rail Partnership.

Faye Keane, the art co-ordinator for Severnside Community Rail Partnership, has been working with the artists and the community throughout this project. She says she felt it was amazing that the station’s existing mural, one of the first of its kind, painted by Bill Guilding on platform one in 1999, had never been vandalised. 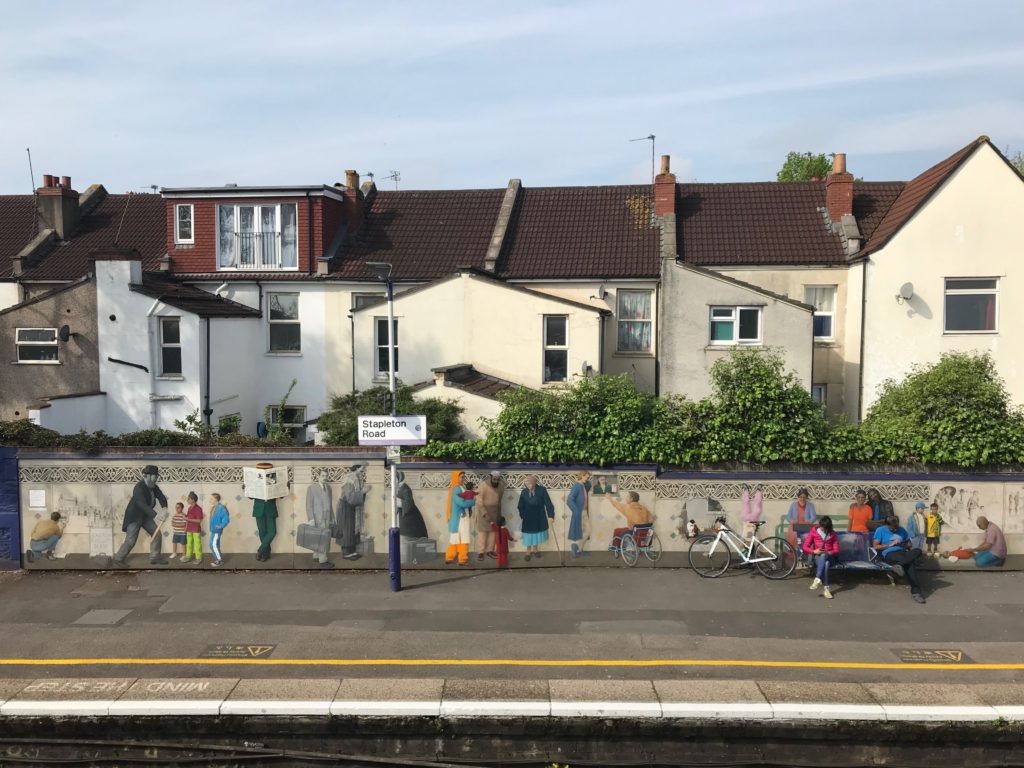 The original mural at Stapleton Road road station was created in 1999. Photo by Bristol24/7

“We have recently spent a lot of money getting the mural restored and at the time there were concerns that it was being removed,” Faye says. “We had to reassure members of the public that this was not the case. We wanted to try and commission artwork like the well-respected mural, that would be cherished in years to come and respected by locals.”

The CIL funding has paid for the three new artworks, along with increasing CCTV at the station, new lighting, and real-time information screens that are soon to be installed. Work will also be carried out to landscape the breathtakingly steep hill as you enter the station from St Mark’s Road, and putting in some benches. There are also plans to create a large community garden and possibly a farmer’s market. 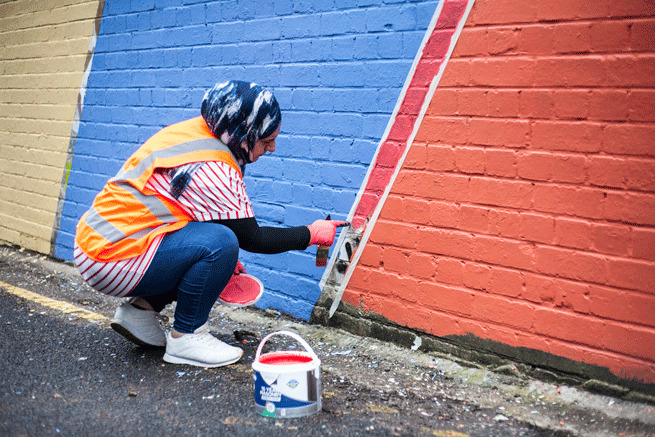 A member of Peace of Art carefully painting. Photo by @ascendphotographicinsta

As well as improving the station for the whole community, for Peace of Art collective to be involved in this work has been a great boost. They formed almost three years ago and this has been their first big commission.

Graphic designer and group member Emily Richards started Peace of Art with Aumairah after attending Upfest and feeling that the artists there were predominately male, with very few from BAME backgrounds. She and the others felt that forming the group would be a way of breaking down these barriers and helping to create a more inclusive environment in the art world.

Easton resident says Lisa Cole says she has been delighted with the way the group has evolved: “I’ve seen Peace of Art go from nervously spraying the courtyard at Baggator to producing a confident and inclusive mural that welcomes everyone at Stapleton Road station.” 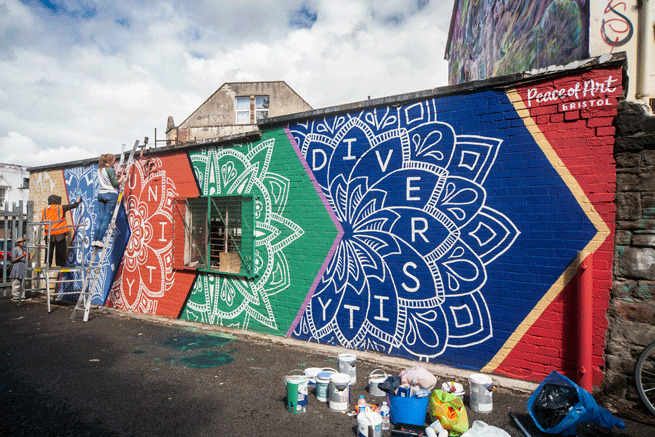 For Aumairah, not even completing the artwork during autumnal weather could dampen the spirits of the group. “Severnside have been amazing; Faye was so supportive and encouraging,” she says. “It has been a joy to be part of this project, even when we were working in the rain!”

Yvonne Deeney is reporting on Lawrence Hill ward as part of Bristol24/7’s community reporter scheme, a project which aims to tell stories from areas of Bristol traditionally under-served by the mainstream media