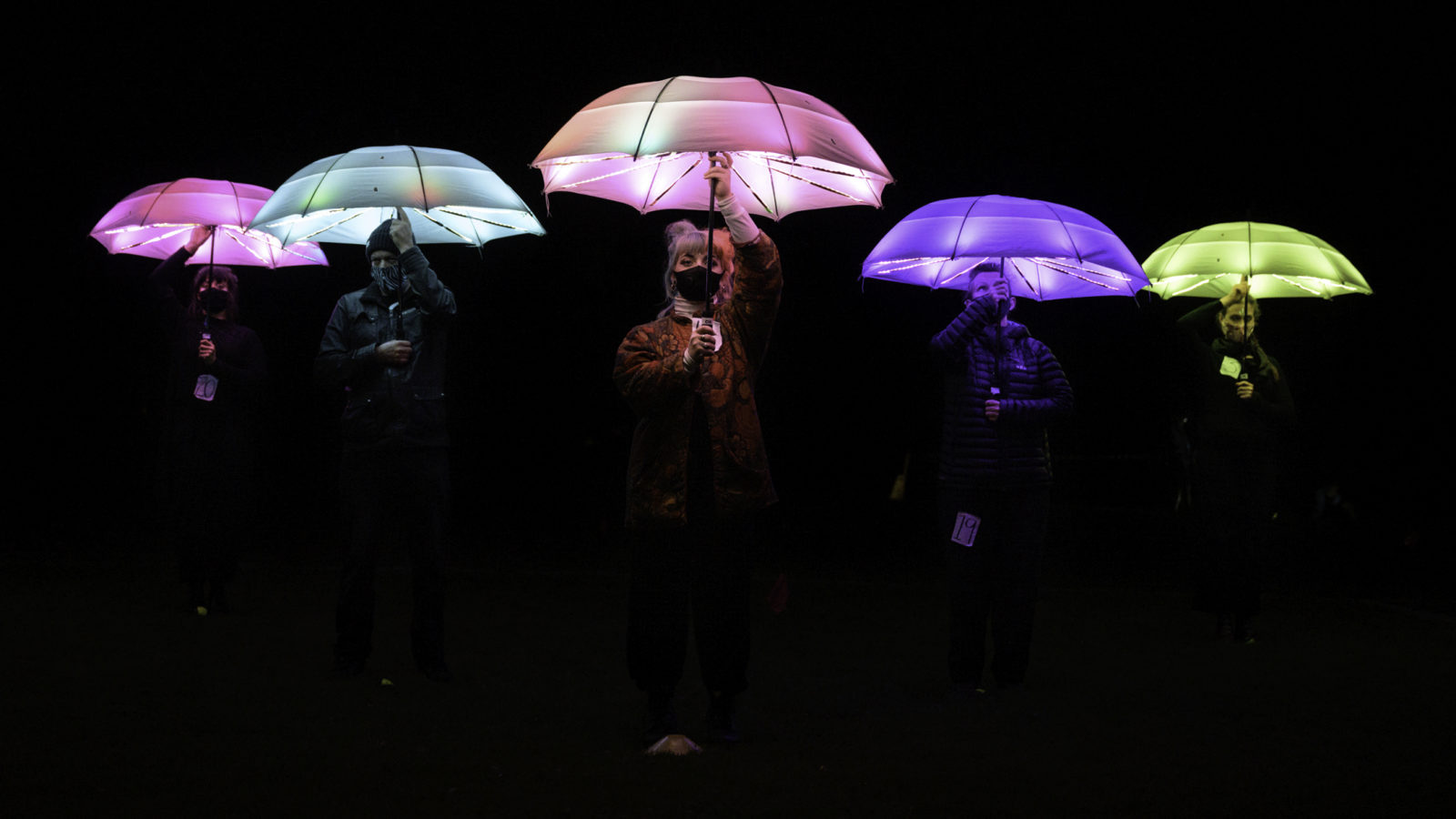 Easton-based Cirque Bijou have produced shows internationally since 1999. Regulars at Bristol Harbour Festival and Glastonbury, in 2020 they were the first UK company to be invited to perform at Taiwan Lantern Festival to an audience of 160,000.

But this performance, directed by Cirque Bijou co-artistic director Julian Bracey, was conducted in front of an audience of zero, in line with current regulations.

“Holding aloft LED umbrellas in a kaleidoscope of colours, the dancers spell out heartfelt messages about the two jewels in the UK’s crown: the arts and the NHS.” Pics: Andre Pattenden

“Holding aloft LED umbrellas in a kaleidoscope of colours, the dancers spell out heartfelt messages about the two jewels in the UK’s crown: the arts and the NHS.

“We wanted to show how, with mindful choreography and the right precautions in place, this kind of celebratory, participatory community event can still happen.

“This time, we were only watched by the blinking eye of a drone, but who knows, next time we may have a real, live audience.”

Safety measures taken during the filming included sanitising props and costumes before and after use, choreographing the piece to take one-metre social distancing into account, the installation of cleaning stations with wipes and hand gel, masks for all cast and crew and collecting all participants’ addresses.

He said: “I’ve worked as a performer for 40 years and 2020 is the longest period I have gone without putting on a show. As a type 2 diabetic, I have been slightly wary about being out and about, but I felt totally safe taking part in this performance.

“I think circus and outdoor arts companies in Bristol are well placed to survive, as the ad-hoc nature of our performance style means we are veritable chameleons and shape-shifters, primed to adapt.

“Though it goes without saying that the arts as a whole has been devastated by Covid and it has been especially tough on younger freelance artists and crew, many of whom had no safety net.”

Mel Stevens runs aerial dance studio and performance company Aim To Fly UK, which offered adapted pre-show classes for people with disabilities. In spite of using crutches to walk since breaking her back during the birth of her third child, Mel also volunteered to take part in the videos.

She said: “Being part of this performance, showing how performing arts can rise from the ashes, was particularly emotional for me as I have so much to thank the NHS for.

“Without spinal surgery and months of physio, I wouldn’t have been able to take part at all. Despite being in a vulnerable group and having received a shielding letter, I trusted implicitly that Cirque Bijou could pull this off in a Covid-secure way, without losing any of the artistry. My biggest worry on the day was how close to the site I would be able to park my car!

“There was a huge energy during the making of the video. It felt like we were both performers and audience at the same time.”

Over lockdown,Cirque Bijou supported over 100 local artists, performers and crew with advice and training, made possible through funding from Arts Council England and Bristol City Council.

The 60-second video will be released on the Cirque Bijou social media channels on 30 September, as part of an international day of action called #WeMakeEvents. The campaign highlights the current plight of the live entertainment sector.

Read more: ‘Things will settle back down. People love comedy, it’ll still be there’