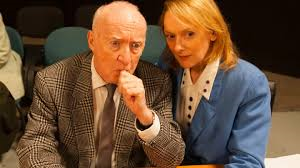 If you suspected that the contributions of Nazi rocket scientists to the Apollo 11 mission had been rather glossed over in those recent wall-to-wall 50th anniversary moon landing celebrations, this is very much the documentary for you.

Johnny Gogan‘s film focuses on just one of the V2 rocket engineers whisked to the US at the end of WWII to prevent them falling into the hands of the dastardly Commies. Arthur Rudolph played a key role in the Apollo 11 mission, but in 1990 he was detained in Toronto on suspicion of being a war criminal. Prisoners of the Moon dramatises his trial from previously unseen transcripts and draws upon archive footage, expert witness interviews and the testimony of Jean Michel, a slave labour survivor of the subterranean wartime V2 factory.