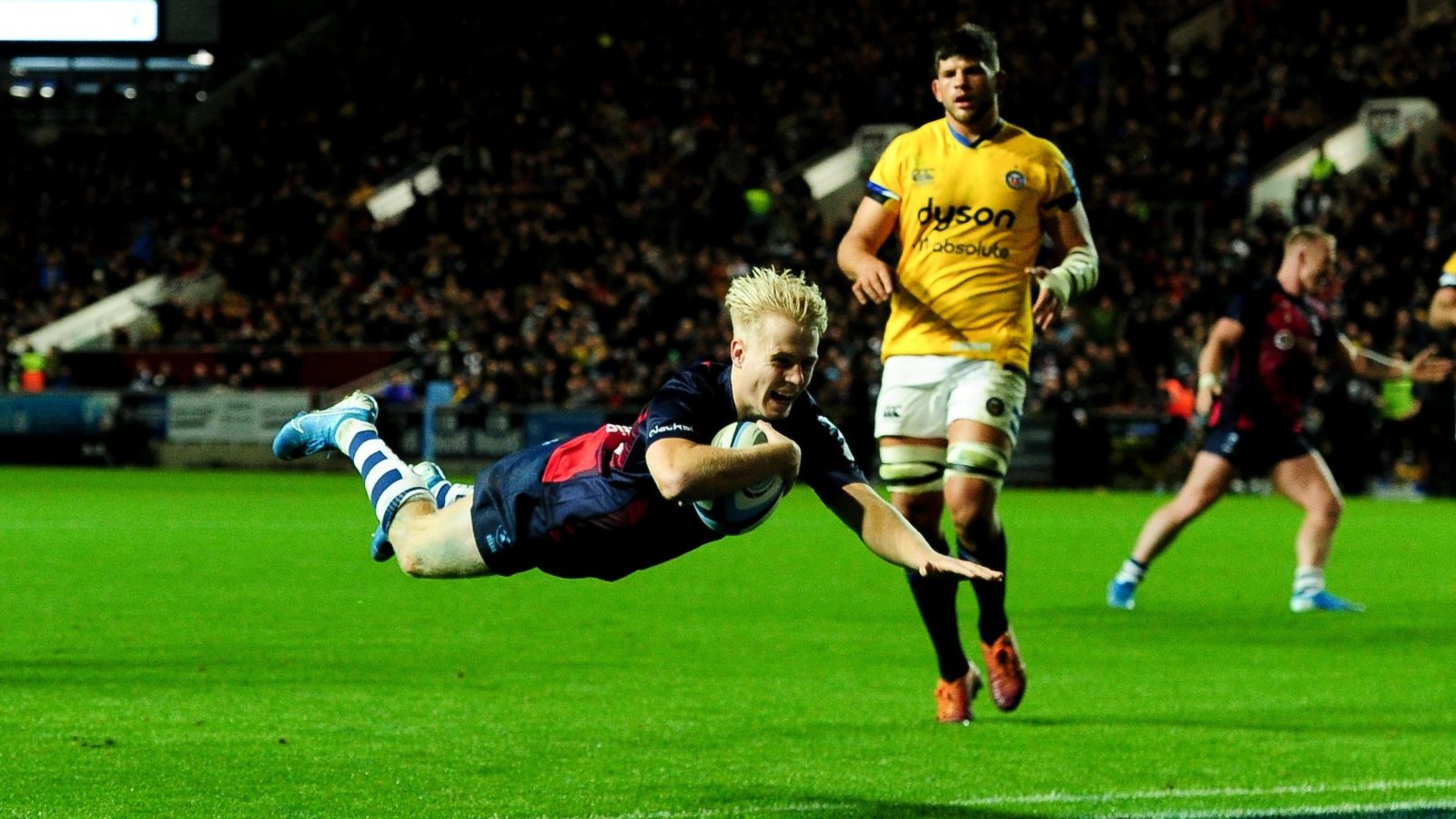 A record breaking crowd left Ashton Gate in fine spirits on Friday evening as Bristol Bears opened their league season with their best ever Premiership win against Bath.

Another record was broken as former Clifton College pupil and Bears Academy graduate Ioan Lloyd became the Bears’ youngest ever player to represent the side in the Premiership, and the 18-year-old made a fairytale start by scoring only minutes after being introduced in the second half.

The decibel levels were raised even higher almost on the stroke of full-time as Luke Morahan scored his second try of the match after opening the evening’s scoring to reach an astonishing 40 points for Bristol against their shell-shocked local rivals.

With several Bath players still on World Cup duty in Japan, Bristol were favourites going into the match but they did things the hard way and this scoreline was unthinkable in a tightly contested first half.

“The boys looked sharp and they looked strong,” said Bears director of rugby Pat Lam after the match.

“We’ve been building our game and building our culture… As I keep saying, it’s about the collective. We have got to get the individuals to step up and collectively become better as a team.”

Lam also singled out Lloyd for praise: “That’s why I signed him. It was a late call but we all backed the call. This will hold him in good stead going forward but there is still a lot of work to do.”

It took Bristol just over 90 seconds to break down the Bath defence, with Luke Morahan diving over the line on the right wing, but the deficit was soon cut to two points following a Bath penalty.

In the first 25 minutes, Bath barely troubled the Bears line, with penalties their only scores, another Rhys Priestland three points coming after a weaving run from Charles Piutau saw Nathan Hughes given a simple run-in from the five-yard line for Bristol’s second try of the match.

But Bath inched in front 13-12 as a Zach Mercer try was followed by a Priestland conversion and this spurred the team in yellow into life.

It was Bristol, however, who finished the first half the stronger. The Bears could have taken the three points when a penalty was awarded with the clock already counted down, but instead they kicked for the corner, worked through some forward phases and in the end it was the lively Mat Protheroe, making his first team debut, who zipped over the line to make it 17-13 at the interval.

A marauding Nathan Hughes run brought the second half to life after 10 minutes but it was the blond bombshell Protheroe who was tantalisingly close to reaching the line after another Billy Whizz-style run, before he skilfully offloaded to the supporting Piers O’Conor for a simple try.

Priestland kept up clawing back the points for Bath with some more accurate spot kicks as Bristol’s Callum Sheedy fared less well with his kicking.

Lewis Boyce’s yellow card with 15 minutes of the game to go was immediately followed by John Afoa powering over the line and this time Sheedy slotted the conversion.

Lloyd dived over thanks to a huge overlap and then there was just time left for Australian winger Morahan’s second to firmly secure the win on this record breaking night at Ashton Gate.