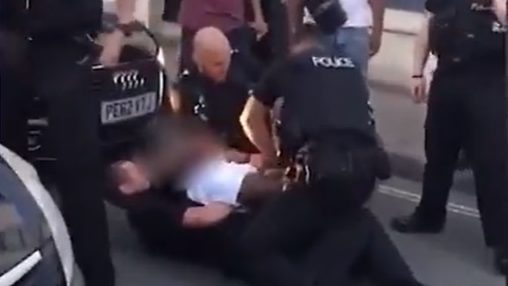 Video footage appearing to show police officers on top of a man while restraining him in St Paul’s has been circulated on social media and prompted Bristol’s mayor to call for calm.

The video shows a crowd forming as a scuffle takes place on the ground.

Police had been called to the area after a man suffered a head injury thought to have been caused by a weapon, with a baseball bat found in the vicinity of Winkworth Place and Argyle Road.

Avon & Somerset police say that one of their officers was left with a suspected fractured jaw after responding to the incident on Friday evening and being hit in the face multiple times.

Bristol mayor Marvin Rees originally said that “tense confrontations” were taking place in St Paul’s, saying that he had been “out with the community and police as we work together to ensure justice and safeguard our peace”.

He later released a joint statement with deputy mayor Asher Craig alongside Raymond Veira, senior pastor at The Church of God of Prophecy in Easton, and Desmond Brown, independent chair of the Lammy Review group for Avon and Somerset.

“It is a complicated local situation compounded by wider tensions brought upon us by the racial inequalities being exposed by covid 19 and the situation in the US.”

The statement added: “Along with members of the community, we will be reviewing the footage and the audio. We will be able to provide more information after this time.

“It is important we work together to safeguard the safety of our community at this time. Take Care.”

On Sunday, chief inspector Paul Wigginton said: “We were called on Friday evening following a number of 999 calls about a public disturbance in the St Paul’s area of Bristol.

“On arrival officers found a large number of people in the streets and a man who had suffered a head injury. He received treatment at the scene but was taken to hospital by paramedics.

“One of our officers present at the scene suffered a nasty injury and received several blows to the face, requiring emergency treatment.

“Our investigation into what happened is still in its early stages and CCTV enquiries are being undertaken. We’d be grateful for anyone with information to come forward to help us build a full understanding of what occurred.

“We’d like to reassure the public that we have increased the number of officers on patrol in that area of Bristol as a result of what happened.

“We were yesterday in dialogue with our key partners, including the Mayor and Deputy Mayor, to make them aware of the events on Friday in St Paul’s.

“We’ve agreed to keep them informed of significant developments in our ongoing criminal investigation and to share the full facts of this case as we look to work together to ensure the safety of the community.”