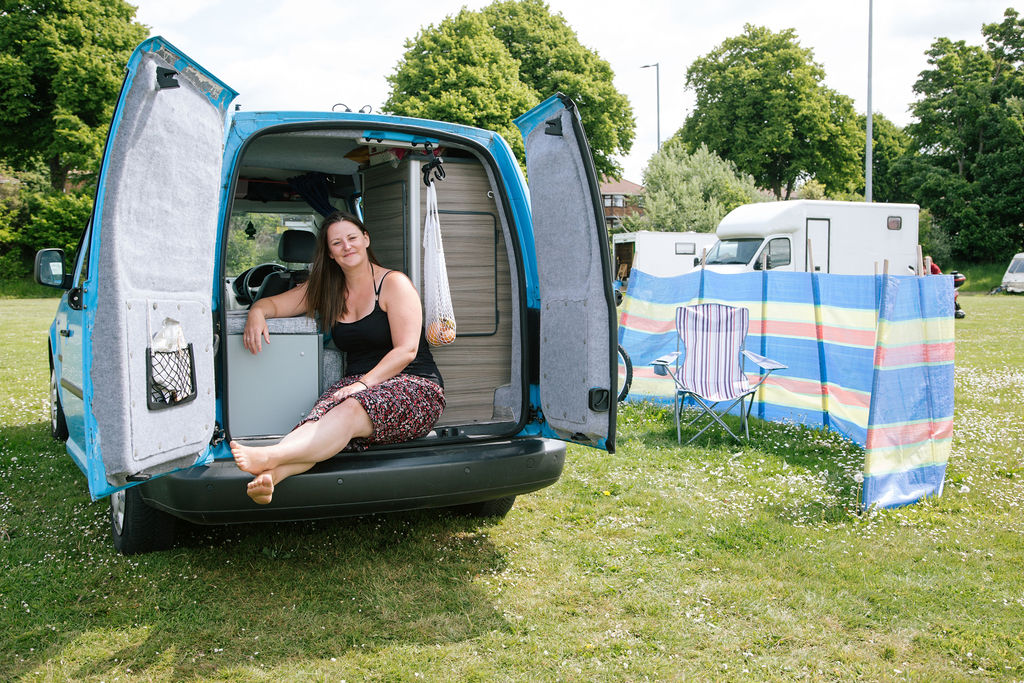 In April, as the UK went into lockdown during the Covid-19 pandemic, an area of land at the Portway Rugby Club in Sea Mills was turned into a site for van dwellers. Bristol City Council arranged the temporary provision with the co-operation of Vehicles for Change, an advocacy organisation for people who live in vehicles. The Portway site offers access to toilets, showers, clean drinking water and waste disposal facilities, and is spacious enough to allow everyone to socially distance.

The opening of the Sea Mills site, plus a second temporary site in Hengrove, was a short-term solution welcomed by van dwellers. While other facilities were all closed, it was a safe place to protect themselves from Covid-19.

Not everyone was happy to see the van dwellers move into their neighbourhood. Crime and anti-social behaviour were some of the issues locals initially raised concerns about. But the van dwellers and the people of Sea Mills have now lived together for four months, and over that time some myths and preconceptions have been busted.

“It feels like Sea Mills has got a new street,” says van dweller Ibby, looking down the row of vans on the immaculate grassy site. It’s a blisteringly hot day, and Ibby and husband Mike are sheltering in the shade of a tree. She works as a photographer, and he’s a lorry driver. She says that some people are shocked to know that van dwellers work: “They think we all live on benefits.”

Ibby and Mike’s van, which they normally park on the Downs, looks like a tiny apartment inside. The compact kitchen includes a full-size cooker and sink with utensils hanging in neat rows. The bedroom space gives them a view out of the van’s doors, and there’s even a small bathroom. Most importantly, after having lived in expensive and poorly maintained rented housing – it’s their own. 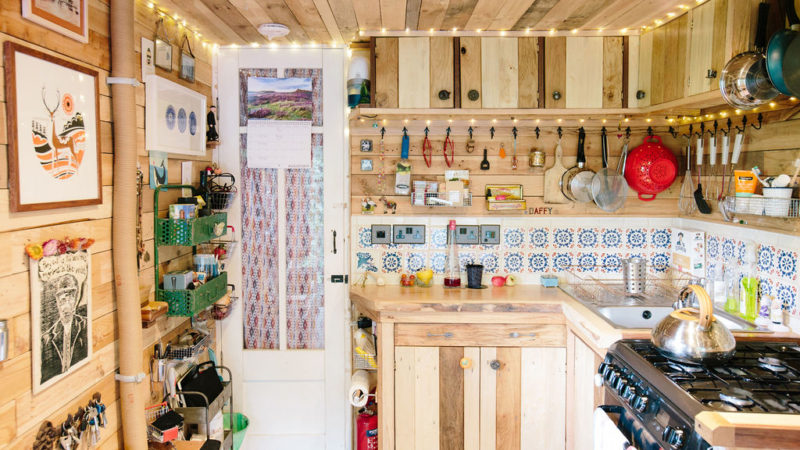 Ibby and Mike’s van looks like a tiny apartment on the inside. Photograph by Ibby

“I was working 65 hours a week as a lorry driver,” Mike says. “Living in the van means I now work 45 hours. It’s lifted the financial pressure of having to find £1,000 a month for rent. I felt like I could breathe, like I was in control and could plan a nicer life with a brighter future.”

Mike looks tense for a moment, maybe remembering those times. He wasn’t able to work during lockdown but he kept busy: working on the van and making planters from driftwood, found while litter-picking on the banks of the Avon, which borders the site. There’s now a little garden around the back of their van, and some of the others have followed suit, with pots of herbs and flowers. 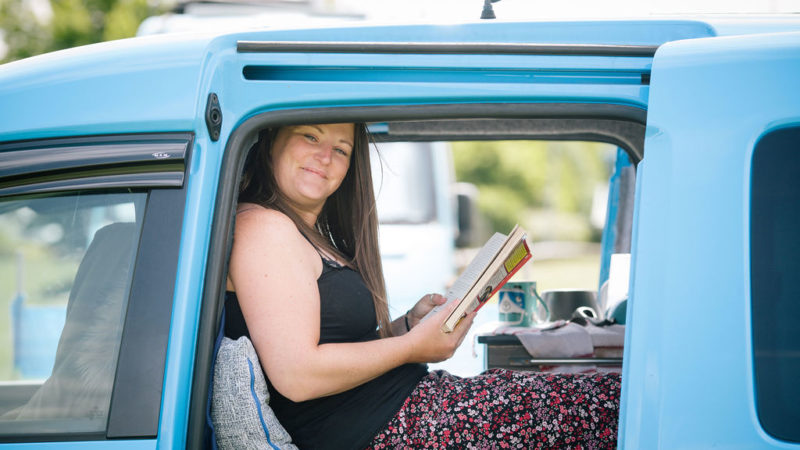 Sam in her surfing van, which she began living in after being evicted during lockdown. Photograph by Ibby

Most of the 25 or so van dwellers on the site work for a living, but have chosen to reside in vans. Some say they have either found Bristol’s housing market prohibitively expensive, or have had problems with the rental market.

Sam Evison is a key worker who has worked throughout lockdown as a dental treatment coordinator. She was evicted from a house in Coombe Dingle during lockdown, through no fault of her own. She’s now living in a tiny campervan she had for surfing trips. The experience has been life changing.

“I was embarrassed at first,” she says of moving out of a house and into her van. “I was worried about what others would think and what work would think. But I’ve done a complete 360 on everything – everyone knows and my boss has been amazing.” She’s now decided to live in the van for longer, to save for a mortgage.

Sam introduces neighbour Dan Clarke as “the big kid” of the group. He bounces over, full of enthusiasm. “I haven’t got a chair,” he says, so sits down to talk in the doorway of his van.

Dan is another lorry driver, working 60 hours a week prior to lockdown. Last year he was renting a flat, but as he was in his lorry six nights a week he considered it a waste of money. He’s not eligible for the Government’s Self-Employment Income Support Scheme so he’s had to claim Universal Credit.

“Until the end of March I was on track to have saved enough for a deposit on a house by Christmas,” Dan says. “It’s been difficult watching my savings dwindle away.”

He’s just about to start a job driving tankers for a company that unblocks drains. “If you want to earn the top money you either need qualifications, experience, or you have to be prepared to do something dirty or dangerous,” he laughs. 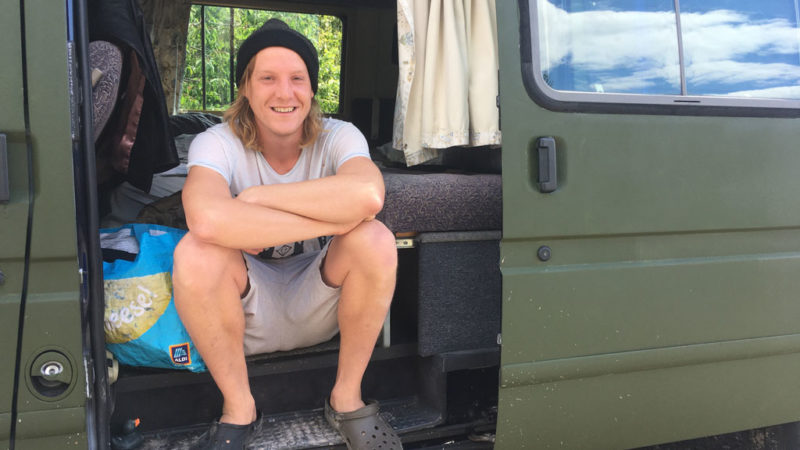 Prior to lockdown, Dan was on course to have saved for a house deposit by Christmas. Photograph by Mary Milton

Everyone is overwhelmingly positive about the van lifestyle, but it’s summer and it is warm. Sam hasn’t experienced a winter parked on the streets yet. Dan has: he mimes huddling in a sleeping bag. “Last winter I was freezing, but I was trying to save money on gas,” he says. “Life parked on the street is a constant battle to source water and power.”

Tree surgeon Thom lives in a smaller truck next to a huge empty horsebox he’s stripped out, ready to renovate. It’s the sort of work he can’t easily do when he’s parked on the road because it requires lots of space. When it’s finished, there will be more space for him and his two children, who live with him part-time.

Violet, aged six, brandishing a broom, is happily chasing her brother Oak, aged three, round and round the outside of the truck. They all began living in vehicles three years ago, when childcare, food, bills and outgoings were just too much to find, even for someone with Thom’s skills and experience. Being at the temporary site made things easier during lockdown. “The kids are safe here. They can just run around,” Thom says. 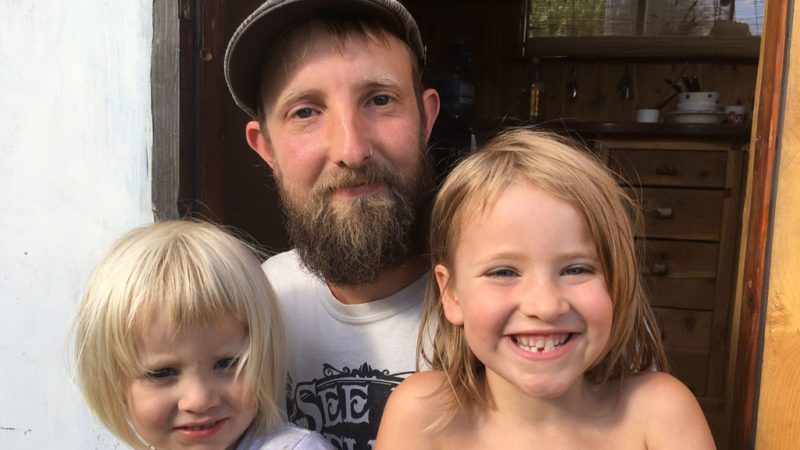 Thom and his children have been living in vans for three years. Photograph by Mary Milton

The presence of the van dwellers did not go unnoticed by residents in Sea Mills, and those aware that they had left the roads around the Downs. This resulted in some heated discussion on social media. Some residents near the Downs were glad to see the vans go, but others had made friends and said they missed them.

There was apprehension from a small minority in Sea Mills about crime and anti-social behaviour. These views were countered by other residents, and van dweller Mike, who explained they needed a safe place to stay and socially distance, just like everyone else, during the pandemic.

This isn’t the first time Sea Mills has been a place of sanctuary or taken people in. During World War Two, US Army officers were billeted with the locals; some remember pestering them for sweets as children. The suburb also became home to refugees fleeing from Nazi oppression.

Both Sam and Dan were concerned about having nowhere legal to go during lockdown. Sam found out about the site from her parents, who saw it on the news.

Dan approached the local police in desperation, who told him about the site. “I looked up the regulations,” Dan says. “They said you were supposed to stay inside. There was nothing about van dwellers. I can’t even stand up in my van. It seemed like whatever I did I would be breaking the law.”

Ibby says she feels that Bristol City Council now has a better understanding of the van dwellers’ needs, and hopes for an improved relationship with them in future. She’s found her time at the site very positive: “It’s probably an unlikely alliance between the footballers and the van dwellers, but we have become friends.” 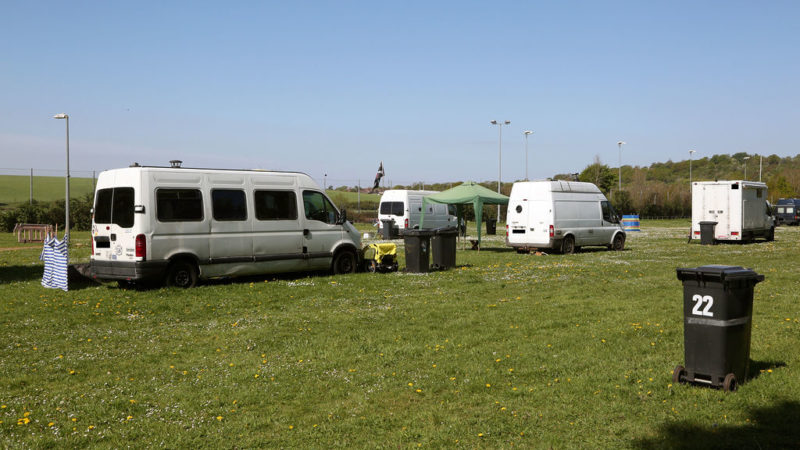 The site is immaculate, despite some initial worries from locals about antisocial behaviour. Photograph by Ibby

Ibby’s sentiment is shared by the management at Portway Rugby Ground, who have taken the time to get to know the van dwellers during their stay.

“I didn’t really know what to expect when we were first asked to host them,” says manager Scott Barnes. “I did maybe have a few reservations as you hear a lot of negative comments relating to the vehicle-dwelling community.”

However, Scott’s experience has been overwhelmingly positive: “I have found them to be absolutely great people and have thoroughly enjoyed working alongside them. There are a fair few of them that I will miss, although hopefully we will stay in touch.”

Mary Milton is reporting on Sea Mills as part of Bristol24/7’s community reporter scheme, a pilot project that aims to tell stories from areas of Bristol traditionally under-served by the mainstream media