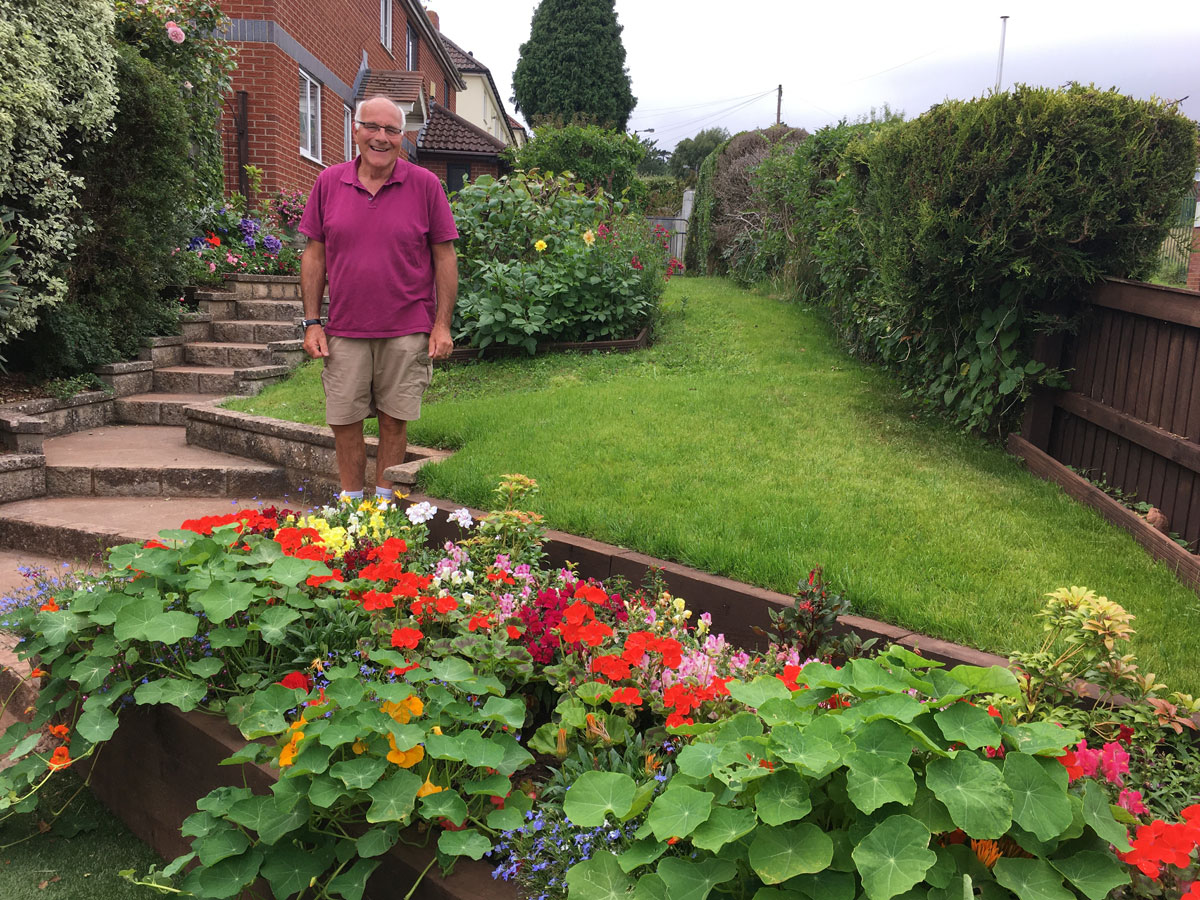 “I haven’t seen Sea Mills this busy for a while,” says Callum Macfie, as he perches on a bench decorated with bunting, alongside his mum, Lin Page. They’ve come out for Sea Mills and Coombe Dingle’s first ever Front Garden Trail, held on Saturday July 18.

“I usually don’t know what day it is at the moment,” laughs Lin. They live in the suburb and look ecstatic to be out. “This has been something to look forward to and I have been getting lots of garden ideas.”

The event was put on by community group Sea Mills and Coombe Dingle Together, as “a way of providing a safe and enjoyable community event for everyone during the pandemic,” says organiser Esther Giles.

“We’d been wanting to organise an open gardens event for a while but of course everything stopped this year. We needed an event that could be quickly organised and done whilst social distancing, so front gardens seemed perfect.”

On this sunny weekend, the trail is popular. There are 26 gardens to visit, but it’s not crowded and everyone is socially distancing. A few people are wearing masks. 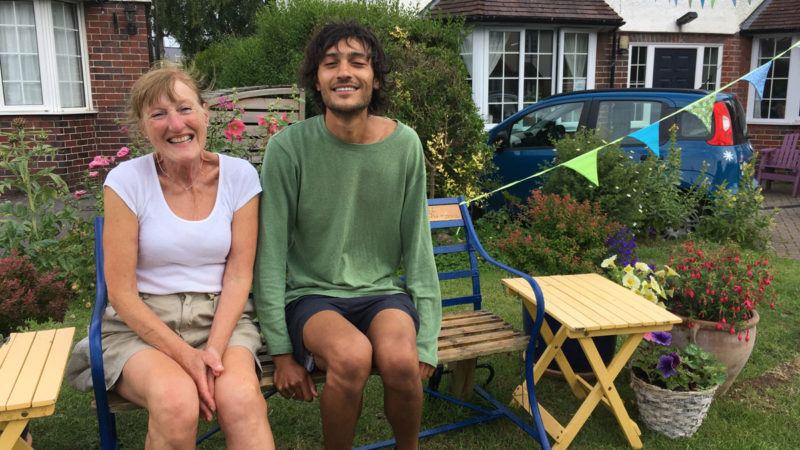 Lin and Callum sit on Johnny Walker’s bench – a lockdown addition to his garden. Photo by Mary Milton

In one front garden, resident Johnny Walker’s bench has been dressed for the occasion, with planters and coloured bunting. It’s a product of the lockdown: Johnny’s been working from home and taking the time to talk to his neighbours a lot more.

“I spoke to Alex, an elderly resident I’ve seen walking past my house for years,” Johnny says. “Alex said it was a shame there was nowhere to sit and rest on his walk. So I thought I would put this bench out for him. We’ve now seen a number of people stop with their shopping to take a break.” 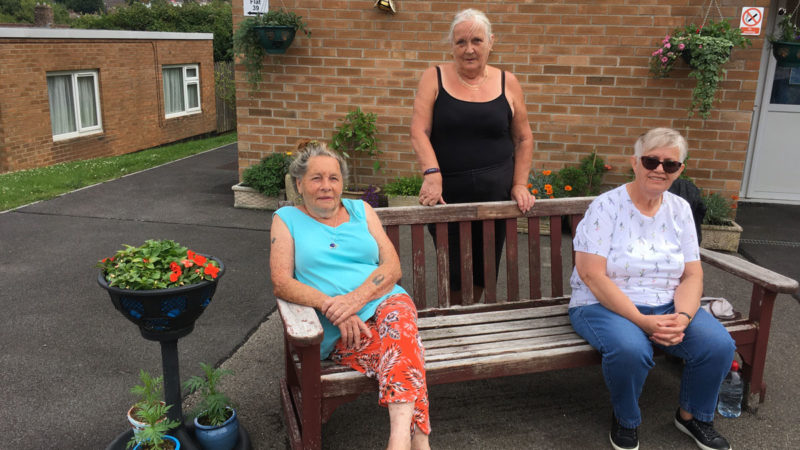 Olivia, Linda and Eileen spent the day interacting with people in the garden of their flats. Photo by Mary Milton

Olivia Malone, Linda Jennings and Eileen Knight live in the independent living flats at Garden Close. They sit surrounded by pots of beautiful flowers. The centrepiece, a wheelbarrow bursting with colour, is the first thing you see as you enter.

“It’s been something to do during the pandemic,” explains Eileen. “Because we have not been able to go out to shops, it’s all been grown from seed or plug plants. There have been obstacles but with the rain and the sun it’s been ok. Doing it has helped us not be depressed during lockdown.”

They have been out in the garden most of the day, and have been enjoying interacting with visitors. “The flats sometimes feel quite separated off but today lots of people have found out where we are,” says Linda. “We feel more part of the community.” 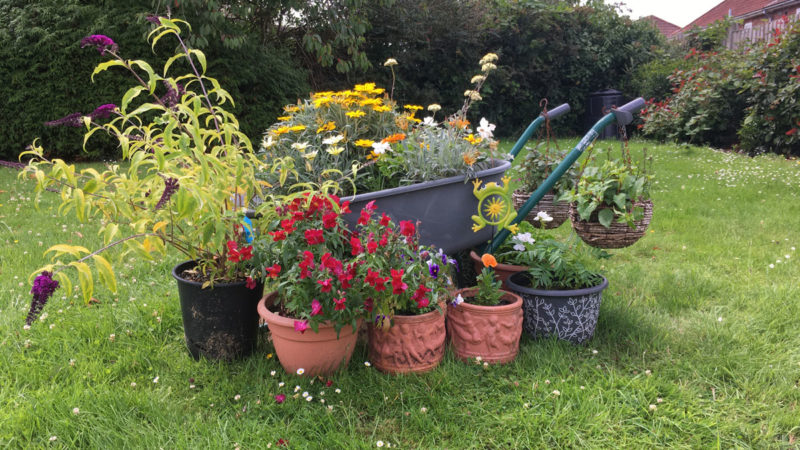 The colourful wheelbarrow that greets you at Garden Close. Photo by Mary Milton

Sea Mills is a garden suburb. Built as municipal council housing 100 years ago in a time of hope and optimism between the world wars, it was designed to be light and spacious and to promote health. Growing food locally was always part of the plan. Several ‘extra gardens’ – allotment sites – were part of the estate layout.

Every house has a front and a back garden. Though many of the original residents would have had no experience of gardening, the existence of a local Horticultural Society and Flower Show by 1929 demonstrates that the opportunity was embraced. 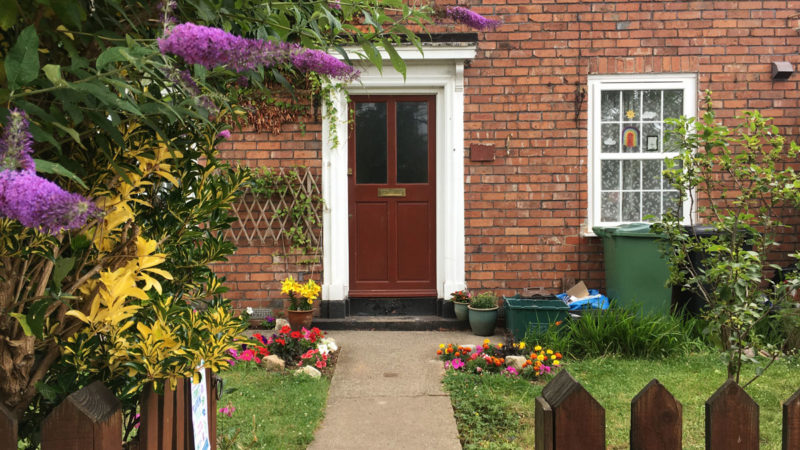 Teenager Ethan’s garden has been a project during the pandemic, and is now attracting bees and butterflies. Photo by Mary Milton

Fourteen-year-old Ethan Bose is too modest to be photographed so it’s fortunate his lockdown project front garden speaks for itself. He’s hoping to attract bees and butterflies with a buddleia bush and numerous colourful flowers. He has also put up bird feeders.

Even younger gardeners have been doing their bit too: Nicola Burand’s children were desperate to be part of the trail “but we don’t really have much in our front garden,” she says. This didn’t stop Ethan, “nearly eight”, and Emily, aged five, from bringing their toys out into the garden and setting them up as a tea party.

“It was Mummy’s idea,” Emily says, hugging a white unicorn, “but we helped put everything out.” 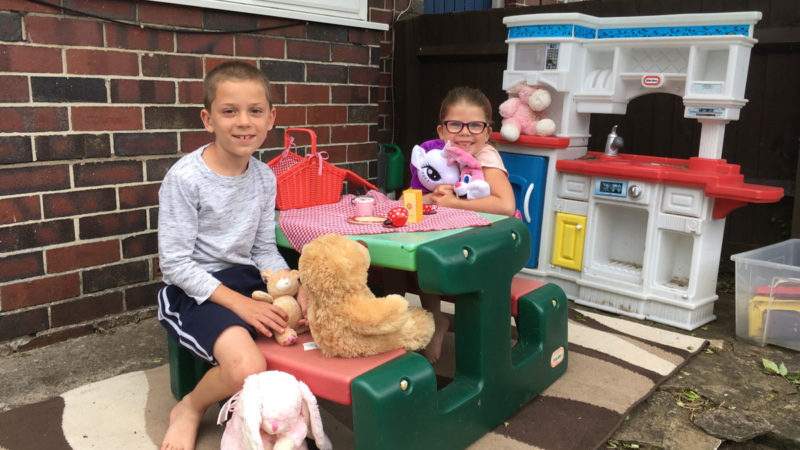 No plants? No problem. Ethan and his sister Emily found a creative way to join in the garden trail. Photo by Mary Milton

There’s also something unique in Mary Wallis’ garden. She’s in her element, having counted 59 visitors by the end of the day. And she’s learnt something too: “The bush by the gate is a spirea!”

Her garden still has the traditional privet hedge, which all Sea Mills’ gardens had originally, but they have cleverly incorporated a parking space without spoiling the look. Her husband Tim is a retired architect and the garden is a synergy of their personalities.

For the garden trail, Mary has added ‘Chuckle Corner’. She’s known for her jokes and has provided some gardening themed ones for the occasion. “Someone’s added more soil to my allotment – the plot thickens,” she says with a flourish. 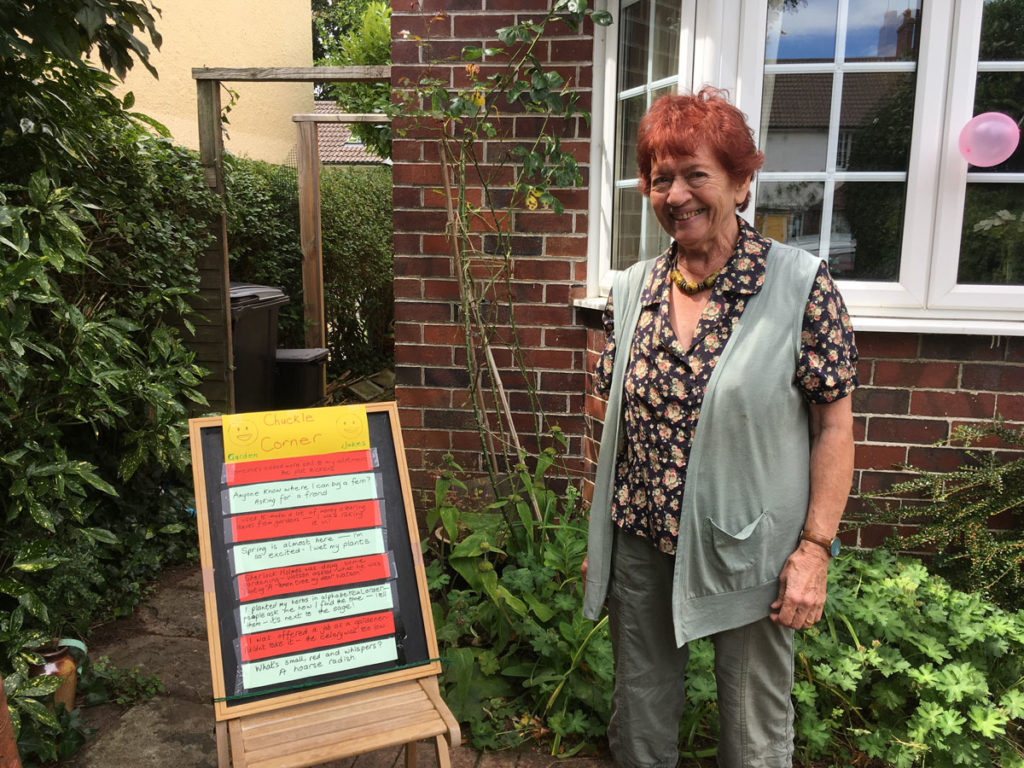 Mary’s Chuckle Corner is a lighthearted addition, alongside a traditional privet hedge and planting. Photo by Mary Milton

It’s perhaps not a surprise that a garden event has gone down so well, given how appreciative of outdoor space people became during lockdown. In some gardens, every inch of space has been utilised.

Emma Hopton and Ben Wookey’s garden is full of amazing looking edible plants. They don’t have a car, so the first thing they did when they moved into their home was to rip up the drive.

“The interaction we got with people walking by when Emma was laying the new path was lovely,” says Ben. “We added the willow fence to say ‘stay and chat’, to keep that community feel. During lockdown we’ve worked on the back garden a lot too. The garden has been our sanctuary.”

“We kept saying to each other, ‘let’s grow through what we are going through’,” says Emma. 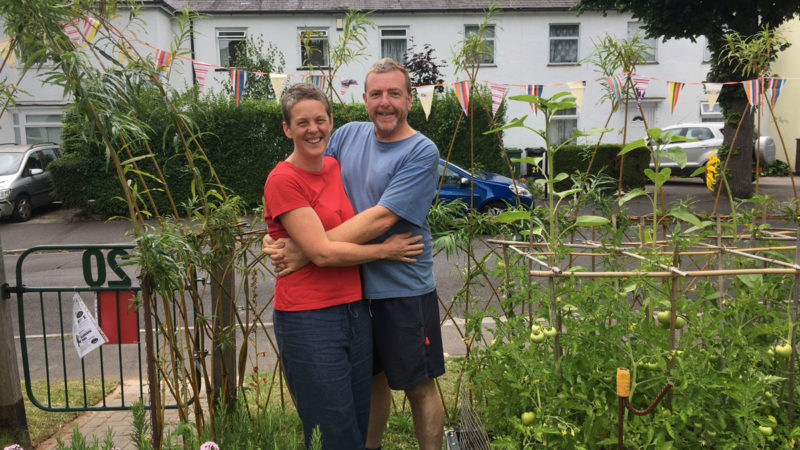 Emma Hopton and Ben Wookey in the garden that has become their ‘sanctuary’. Photo by Mary Milton

Emma modestly plays down how fantastic the garden looks. Like many of the trail’s gardeners she claims they don’t really know what they are doing: “The slugs have eaten the cabbages and other things have gone to seed, but they look nice!”

Just like the first tenants who dug the soil around these houses 100 years ago, they seem to have muddled through. The results look blooming great.

Read more: Knowle West to get it’s own walk of fame