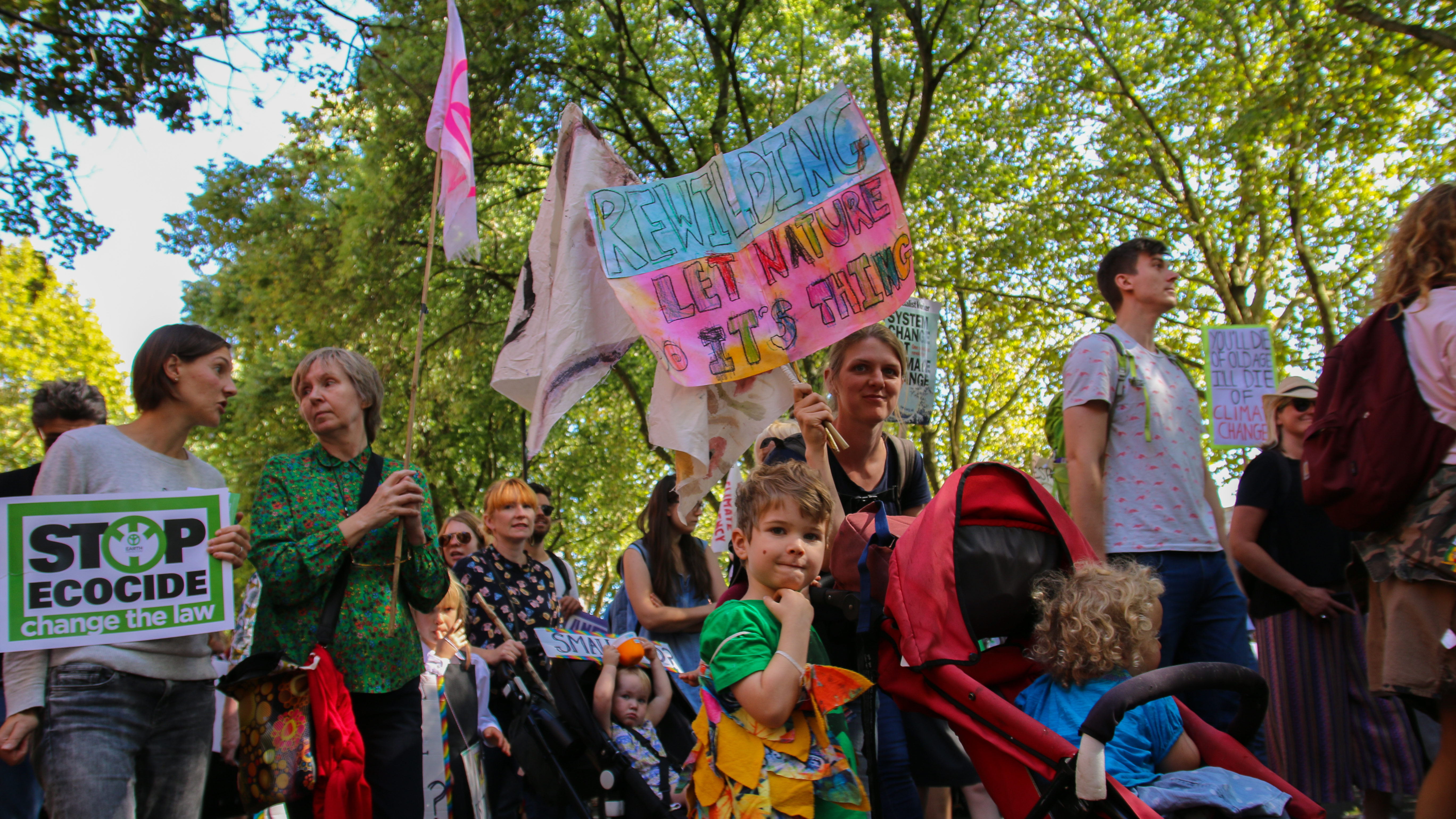 Bristol is hardly unaccustomed to protest, but the thousands of marchers who turned out in support of the seventh climate strike – the first general walk-out of its kind – amounted to a demonstration on a scale the city has rarely seen before.

As the sun beats down at midday, people of all ages stream out of College Green in unprecedented numbers, snaking their way through Broadmead and looping back past the harbourfront. Roads are gridlocked, the usual flows of pedestrian traffic dislodged; motorists sit atop the roofs of their vehicles, watching the churn of jubilant strikers surge past. The streets are at a standstill.

Organisers retrospectively put estimates at upwards of 10,000, but mid-march, they’d barely had time to process the scale of what they’d achieved. 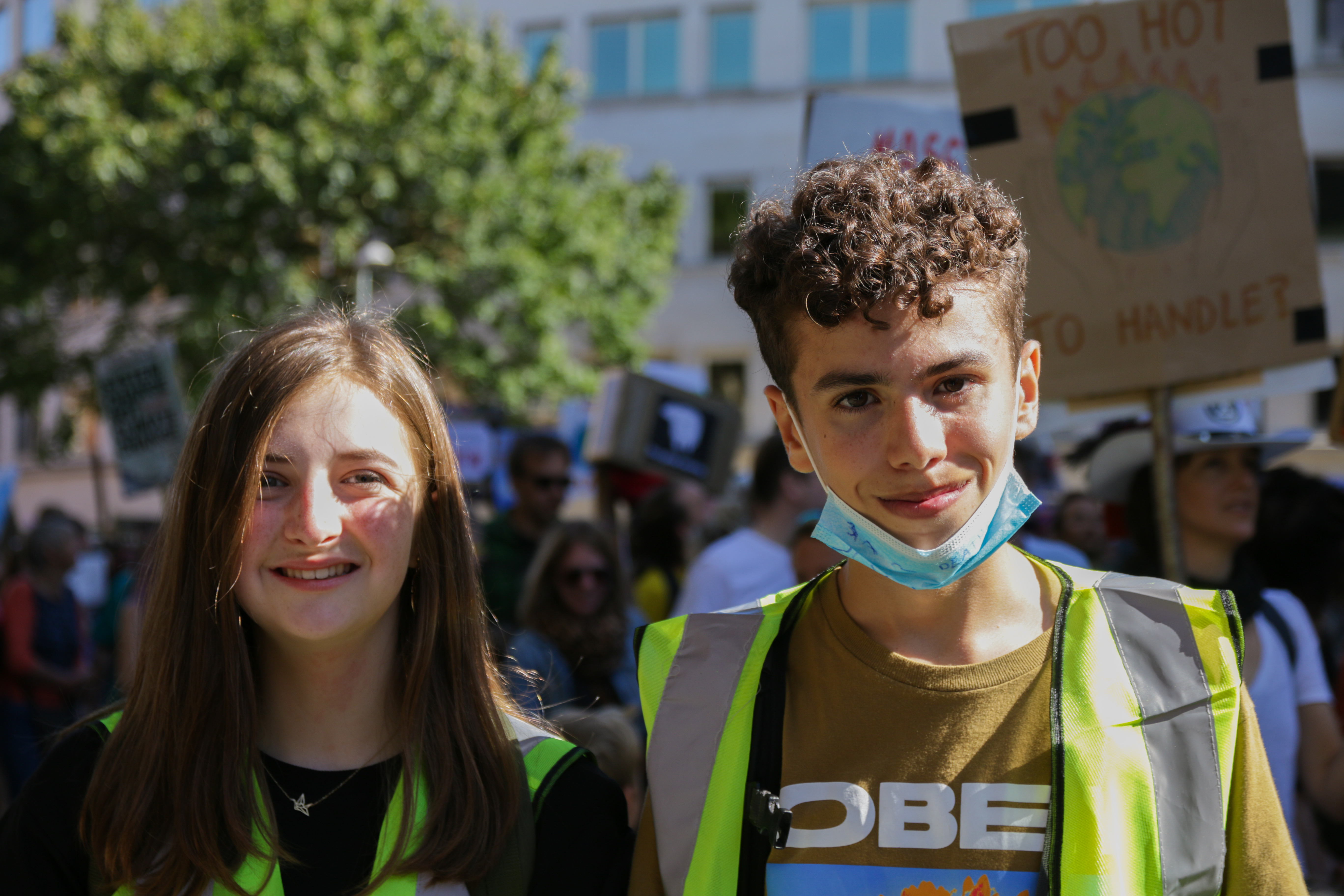 Izzy, 17, has been helping to coordinate the Bristol wing of the UK Student Climate Network since May. While valiantly attempting to direct the flow of marchers, she reflects on the months of intensive work that have led to this demonstration.

“It’s really emotional,” she says. “Only about 15 of us are organising this.”

She says the group has spent all summer working towards the strike – making posters and flyers, meeting with trade unions, going to planning meetings, and running social media campaigns.

“To see something this big, to see this many people come out for climate change, it’s just insane.”

At this point, we’re interrupted by an ecstatic cheer that ripples through the crowd, and she grins.

“When this many people come out, the government can’t ignore it, they can’t hide, they have to make substantial change,” adds Izzy.

Throughout the crowd, dissatisfaction at the perceived inaction of elected officials is palpable. The faces of Boris Johnson and Donald Trump loom above the crowd on placards emblazoned with damning indictments of their administrations. 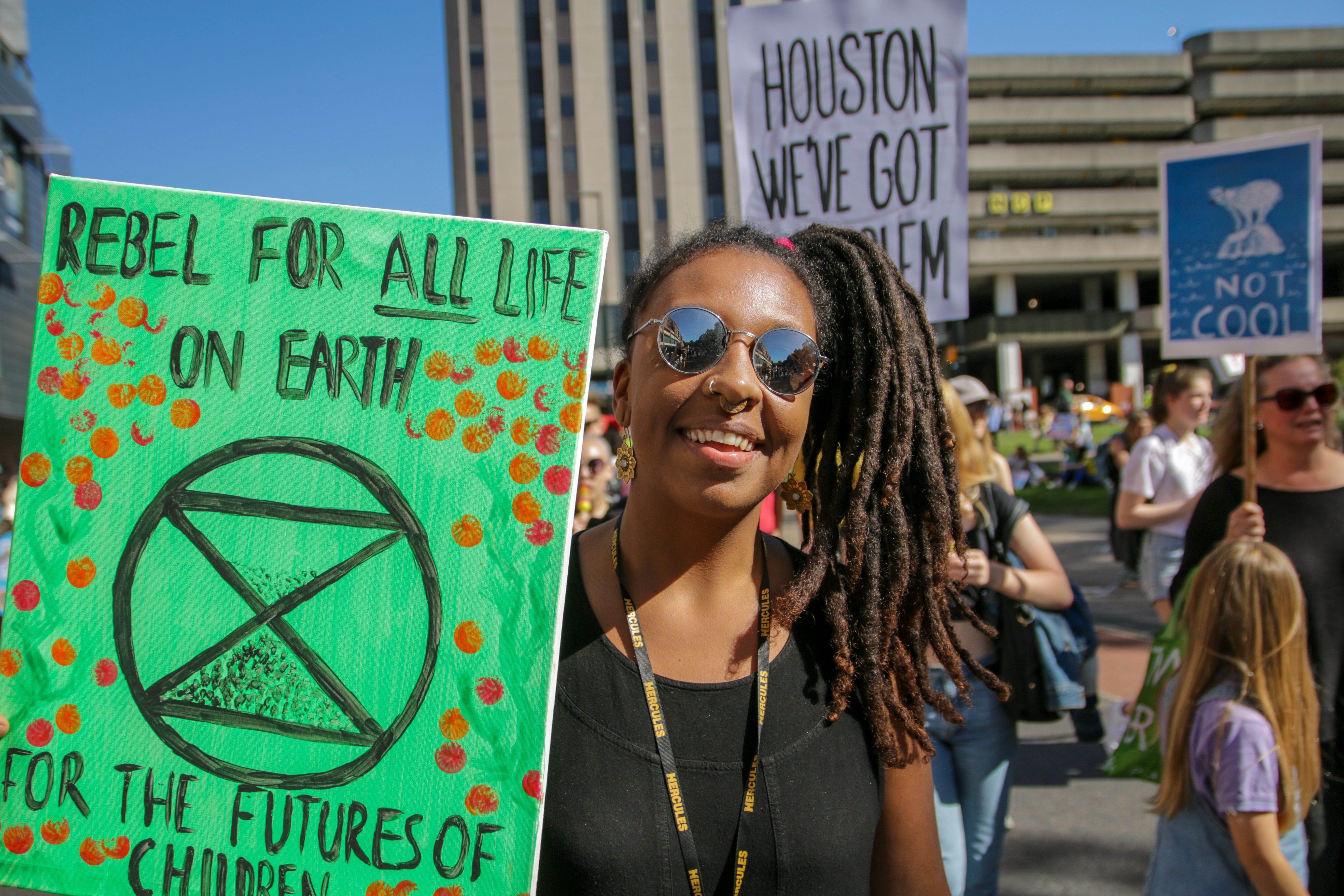 Adua, 29, expresses dismay at the lack of actions by governments around the world.

“We’ve been left with no choice, nothing’s moving fast enough,” she sighs. “We’re doing what’s necessary because the people in power are not.” 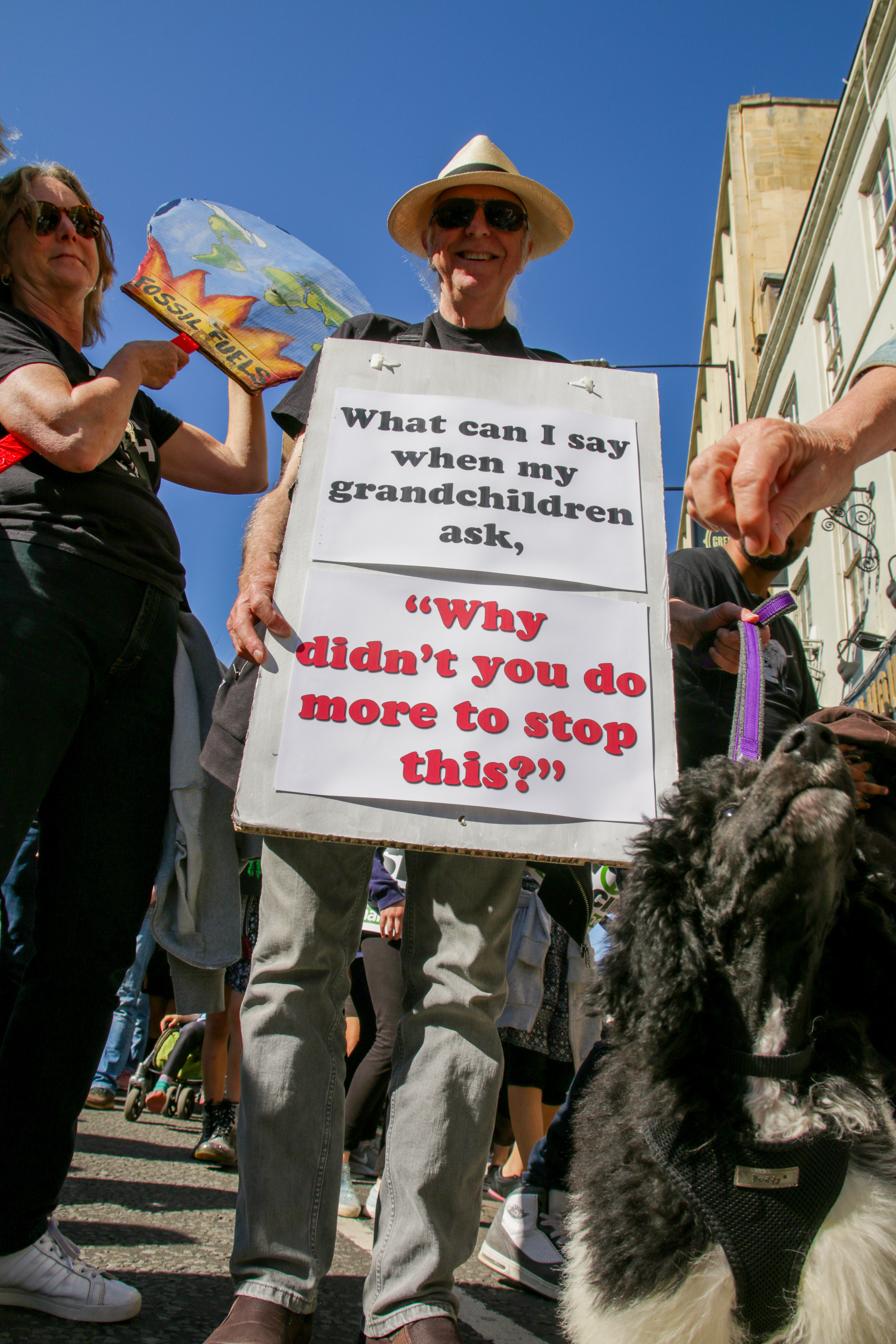 Further up, Martin, 71, expresses similar concerns about the failure of politicians to respond. “Governments cannot continue with their current way of doing business,” he insists. “This needs dramatic and urgent attention.”

Marching with a sign that reads, ‘what will I say to my grandchildren?’, he declares that it is the responsibility of people his age to support the strikes called by younger generations.

“I’m here to support them because it’s their future – they’re the future.” 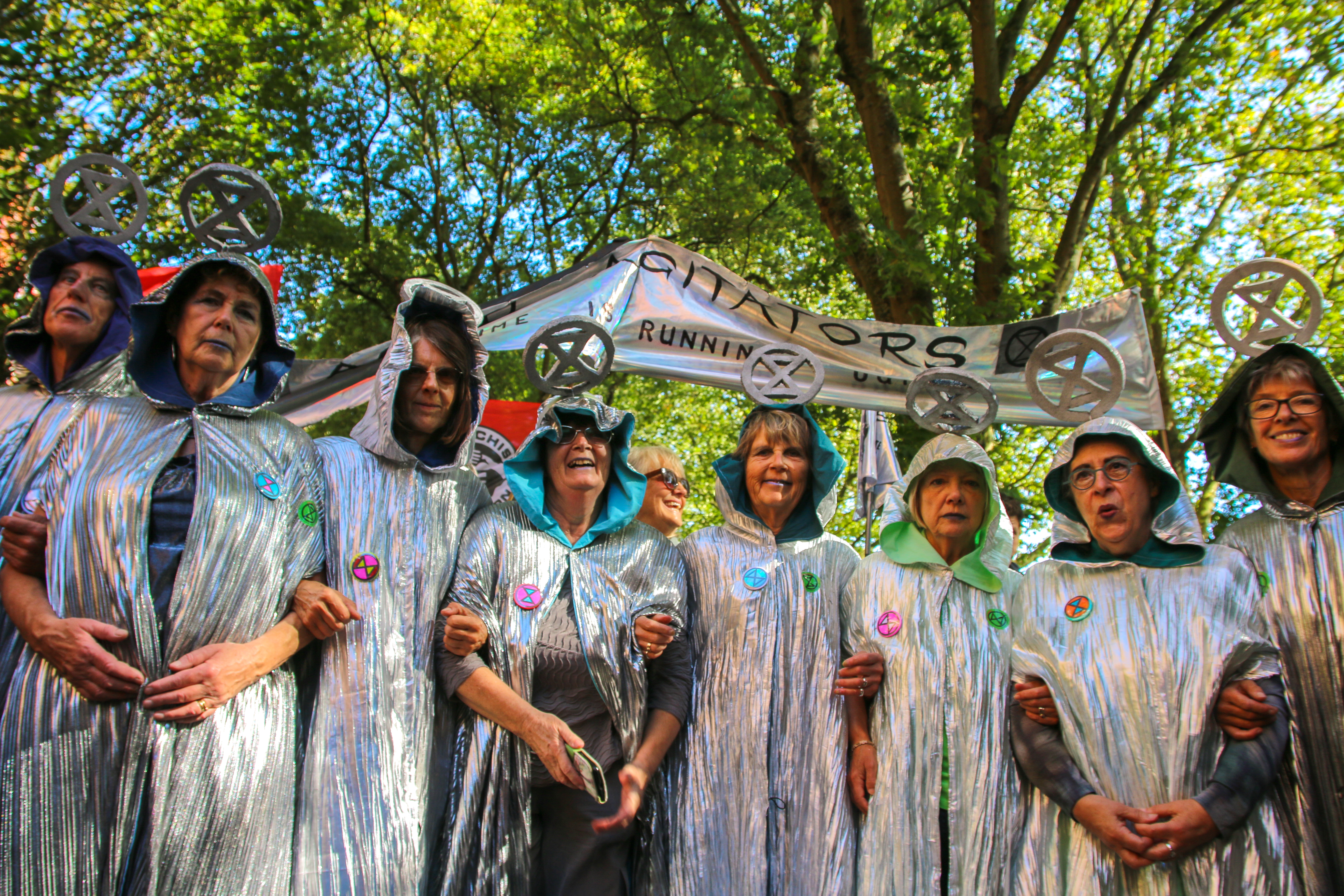 It’s a sentiment that’s shared by five Extinction Rebellion activists, clad in silver and handing out leaflets that proclaim, ‘you’re never too old to rebel’.

“It’s important for us to be in solidarity with the younger generation, because let’s face it, this happened on our watch,” says Sarah.

On the subject of what they hope to achieve by marching, Fie pipes up: “to force change, to shift public discourse”. 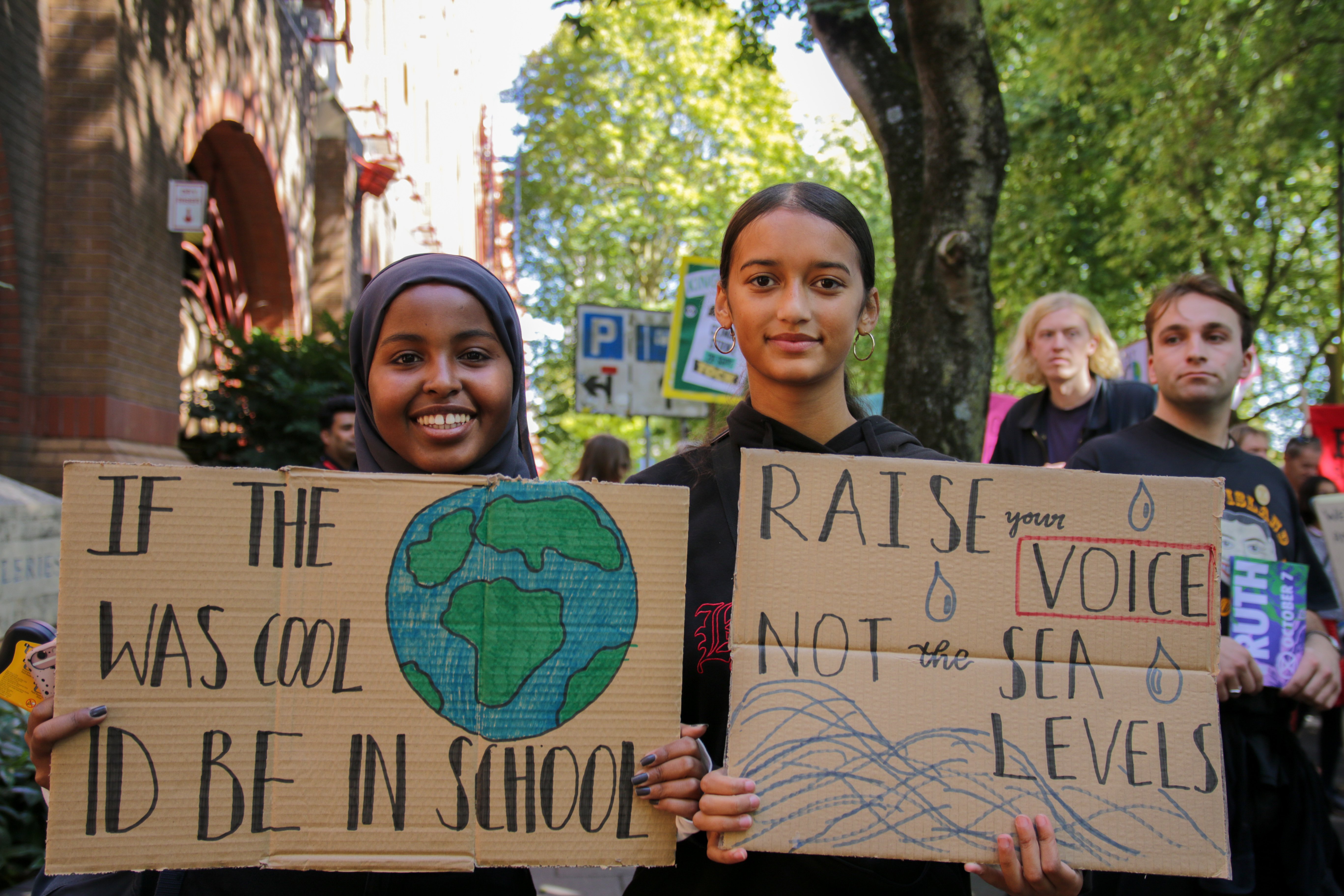 Shayma and Alamay are hopeful for the future

When asked the same question, Shayma and Alamay, both 18, share tentative optimism at the prospects of action.

“I don’t think governments around the world are going to change,” Shayma says, “but I think the public are going to make a big difference.”

Alamay points out the sheer volume of people compared to the first school strikes, which barely drew a crowd big enough to fill one corner of College Green.

“It’s increased a lot, and that puts pressure on the government. As public opinion changes, that will affect the attitudes of those who want to get voted in – even if they’re not doing it for a good reason, it might still make a change.

“Plus, even for people who oppose it, who are frustrated by the inconvenience, it provokes a conversation, it makes people talk about it, whether they like it or not.” 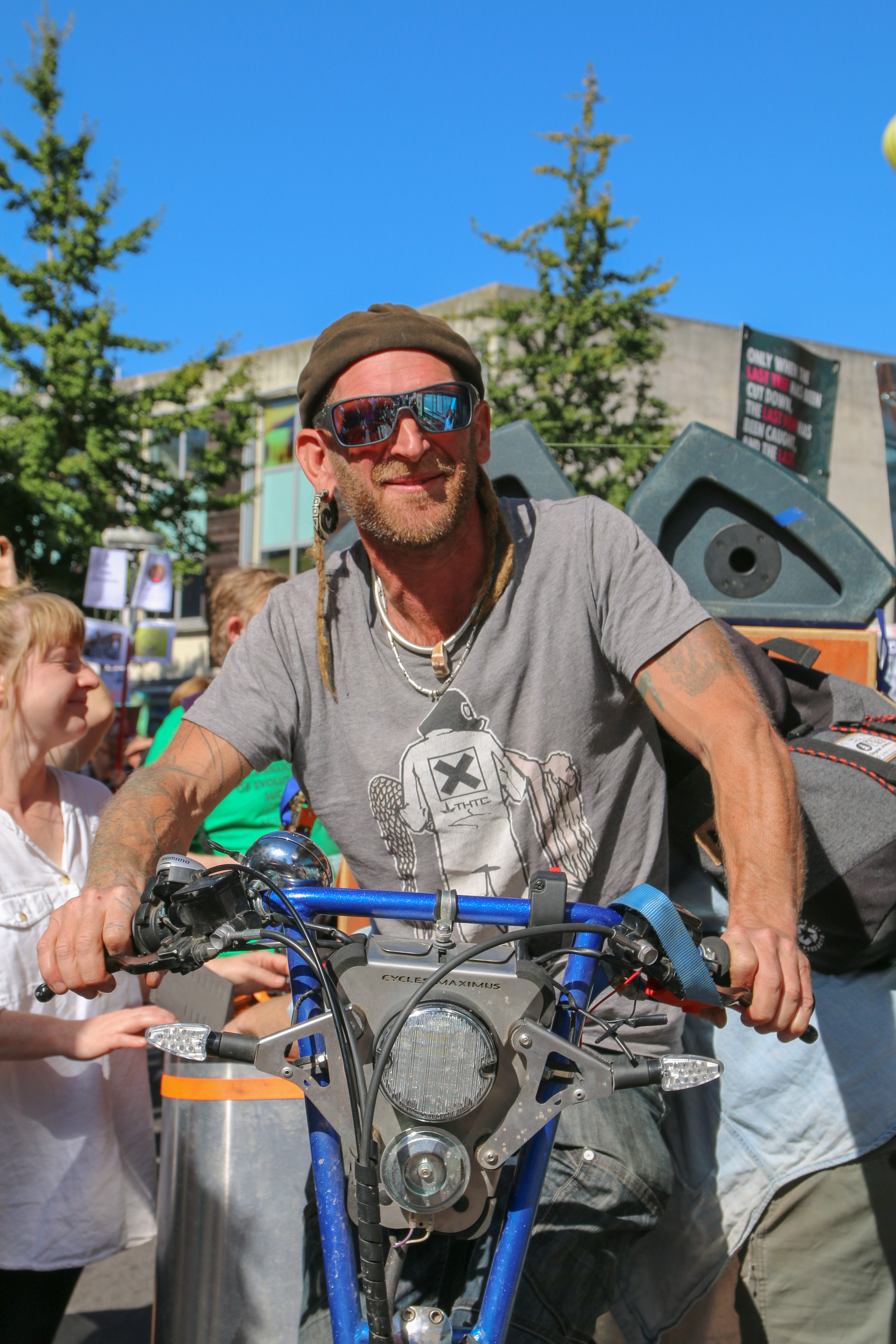 Pedalling through Broadmead with a sizeable sound-system rigged up to his bike, Fluffeee, 47, expresses similar hopes.

“Protesting, it sows a seed in the minds of people who aren’t even involved,” he shouts over the top of the bass booming from his bicycle. “Every conversation that starts is a hope.”

Does he feel hopeful? Without hesitation, he replies: “I have to.” 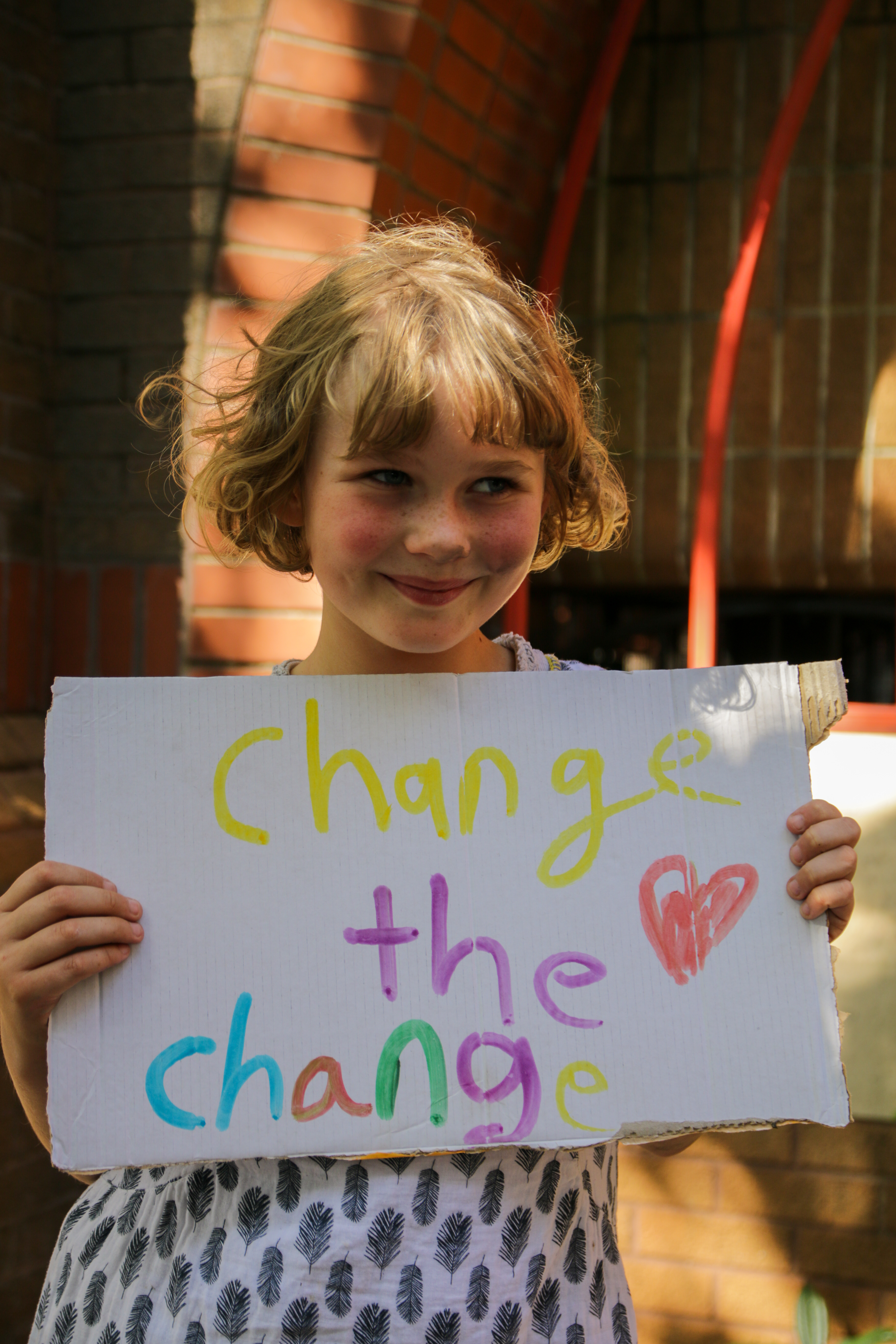 That sense of fierce resolve hangs in the air throughout the day. Viva, nine, is determined to secure the future of her generation. “This is about my future, this is about every child’s future,” she passionately declares. “If climate change is going to be our future, then the world is in a lot of trouble.” She insists she’ll be back on the streets if no action is taken. 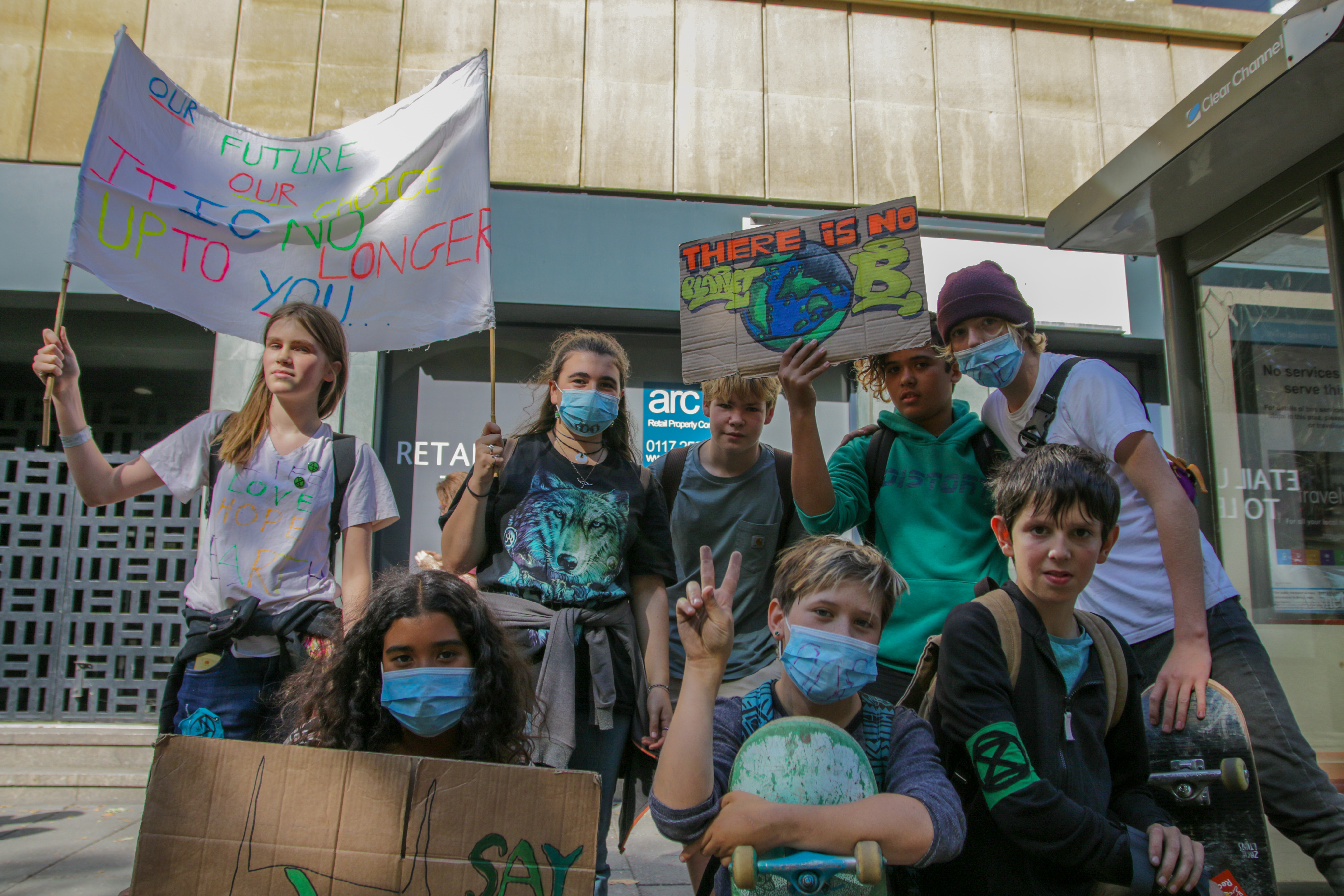 As the march rounds its penultimate corner, a group of school kids are spotted atop a bus stop, waving their placards to the time of Fluffeee’s beat. Rowan, 12 – the smallest, but the loudest – yells, “the planet won’t sort itself out, so we need to do something about it!”

“We gotta prompt the government to do something,” agrees Casper, 13.

Do they feel optimistic about the future?

The march begins to embark on its victory lap back to the council building while Adan, 17, attempts to direct the euphoric crowd. As an organiser of the march, he’s been working up to this moment for months. But whereas others might feel pride, he seems exasperated.

“It’s getting to the point where we’ve been doing this for six months, missing school every month, no matter the weather. But nothing changes. And some of us are willing to go to the next level to stop this.”

It’s a sobering end to an otherwise triumphant display of collective willpower. Drawing thousands out on a midweek afternoon is an astonishing accomplishment, and the day’s success is testament to the efficacy of the students who are now leading the fight against climate change. But while the momentum appeared firmly behind the climate movement on that sunny Friday, Adan seemed sure that the real fight had only just begun.

The outcome is still uncertain, but one thing’s for sure – these kids aren’t going anywhere, and they’ll be back out in droves if they don’t get what they’re demanding. 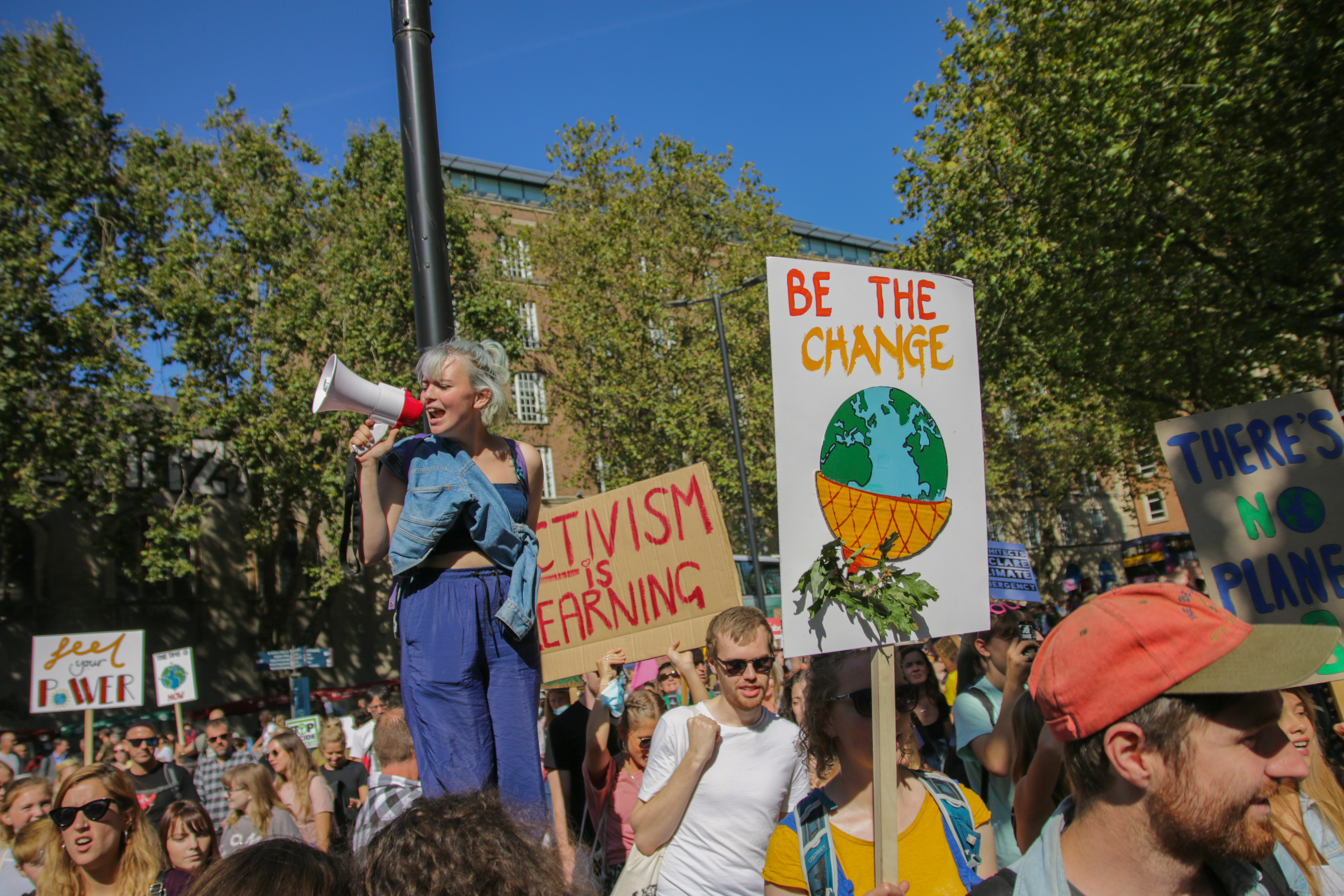 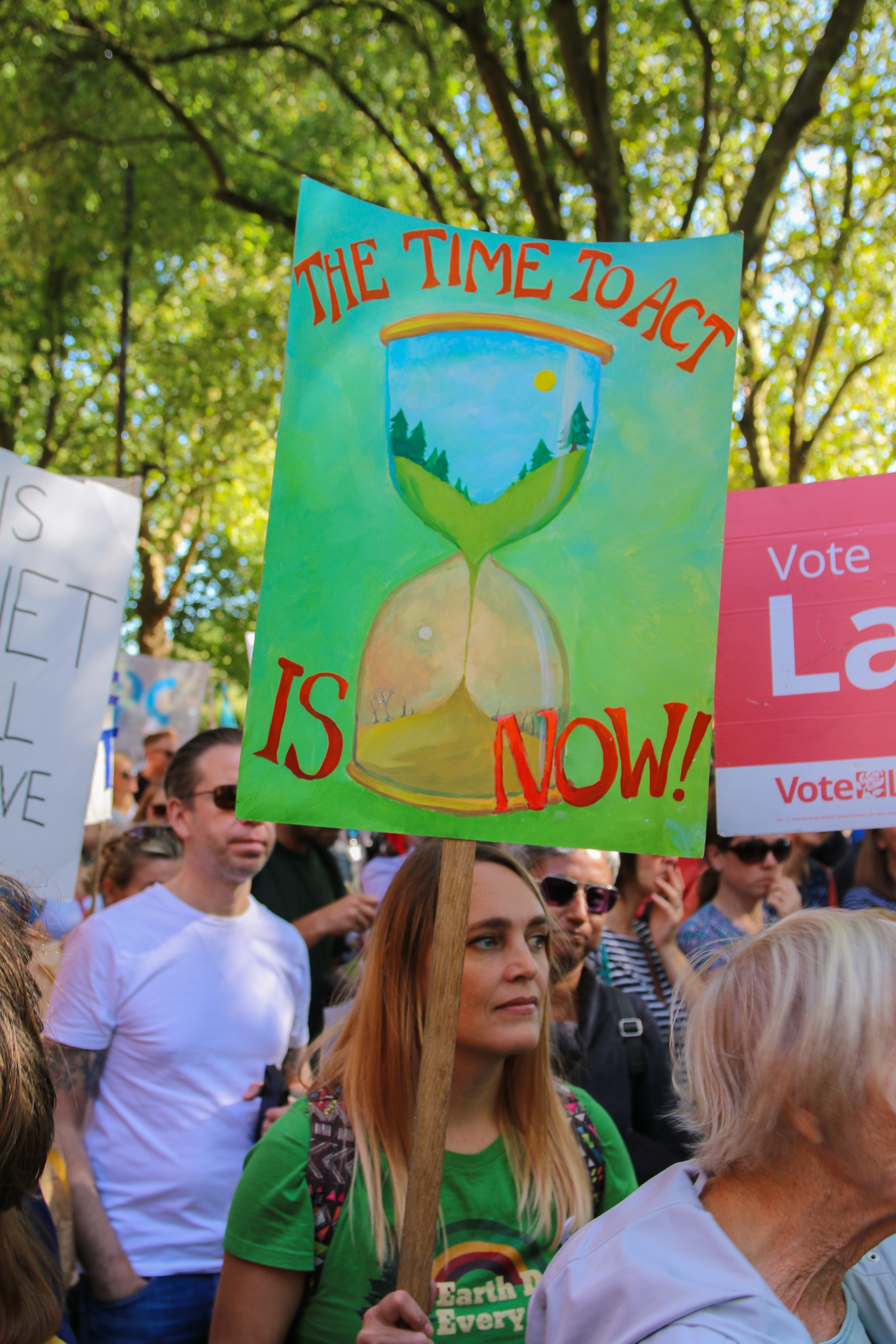 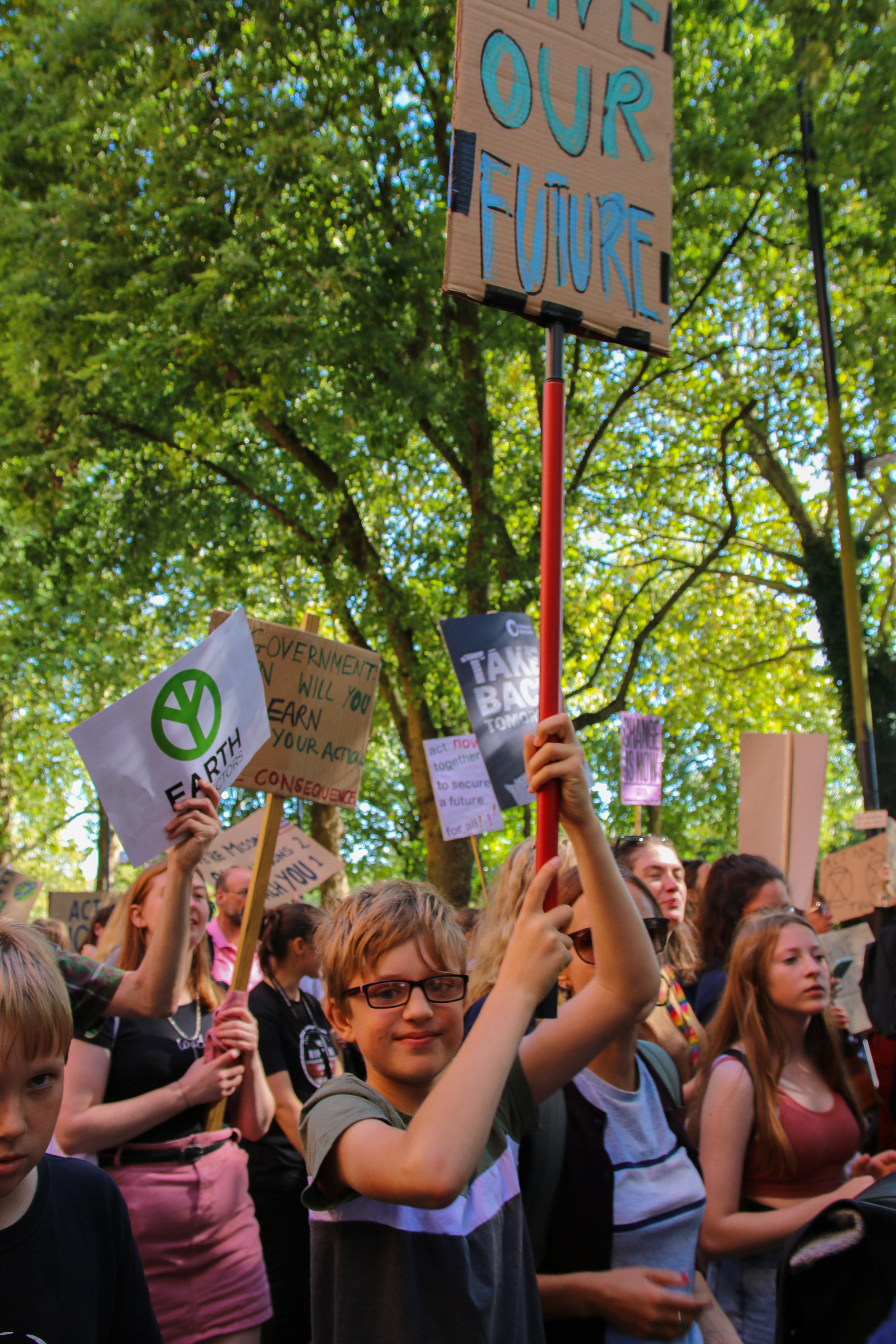 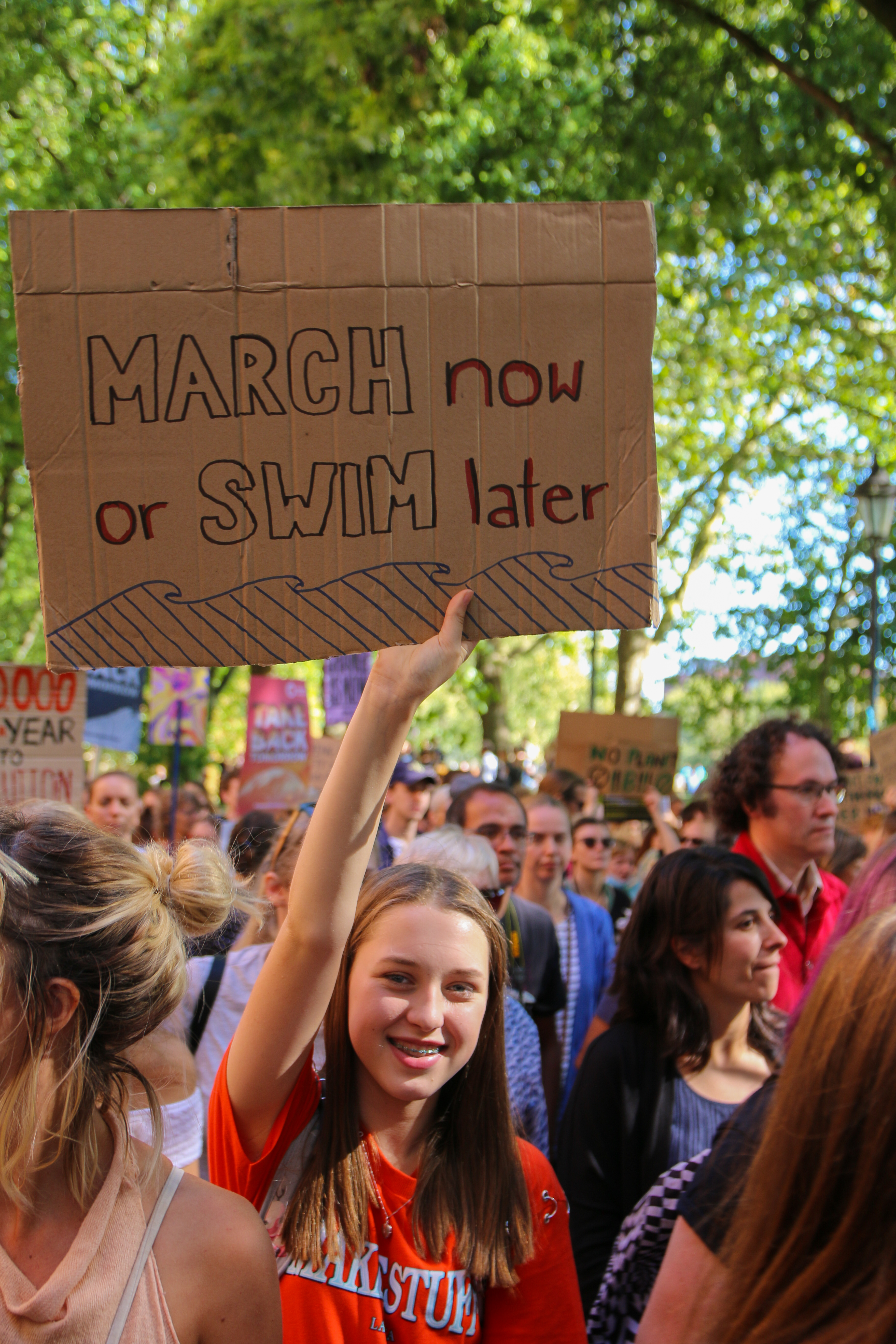 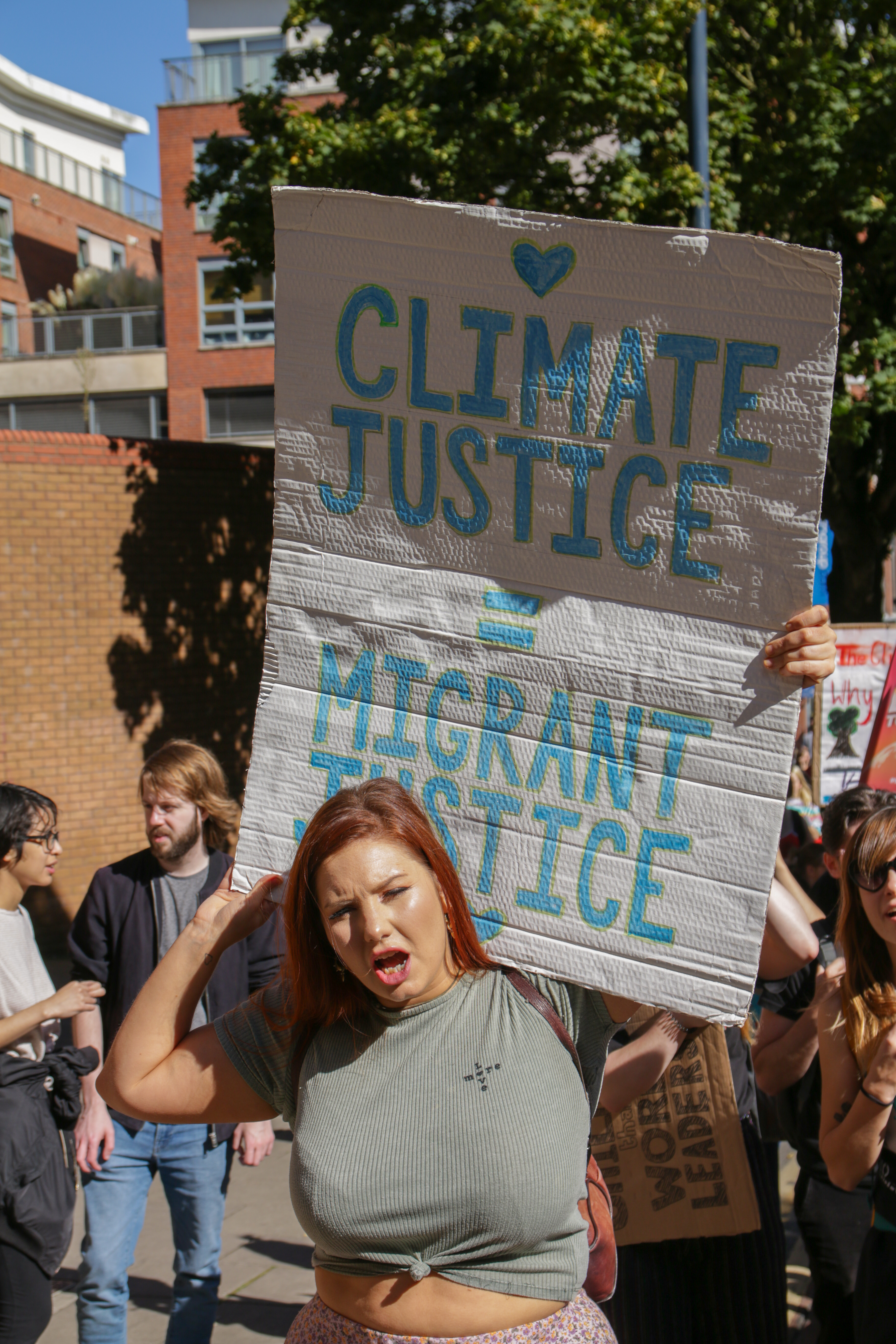 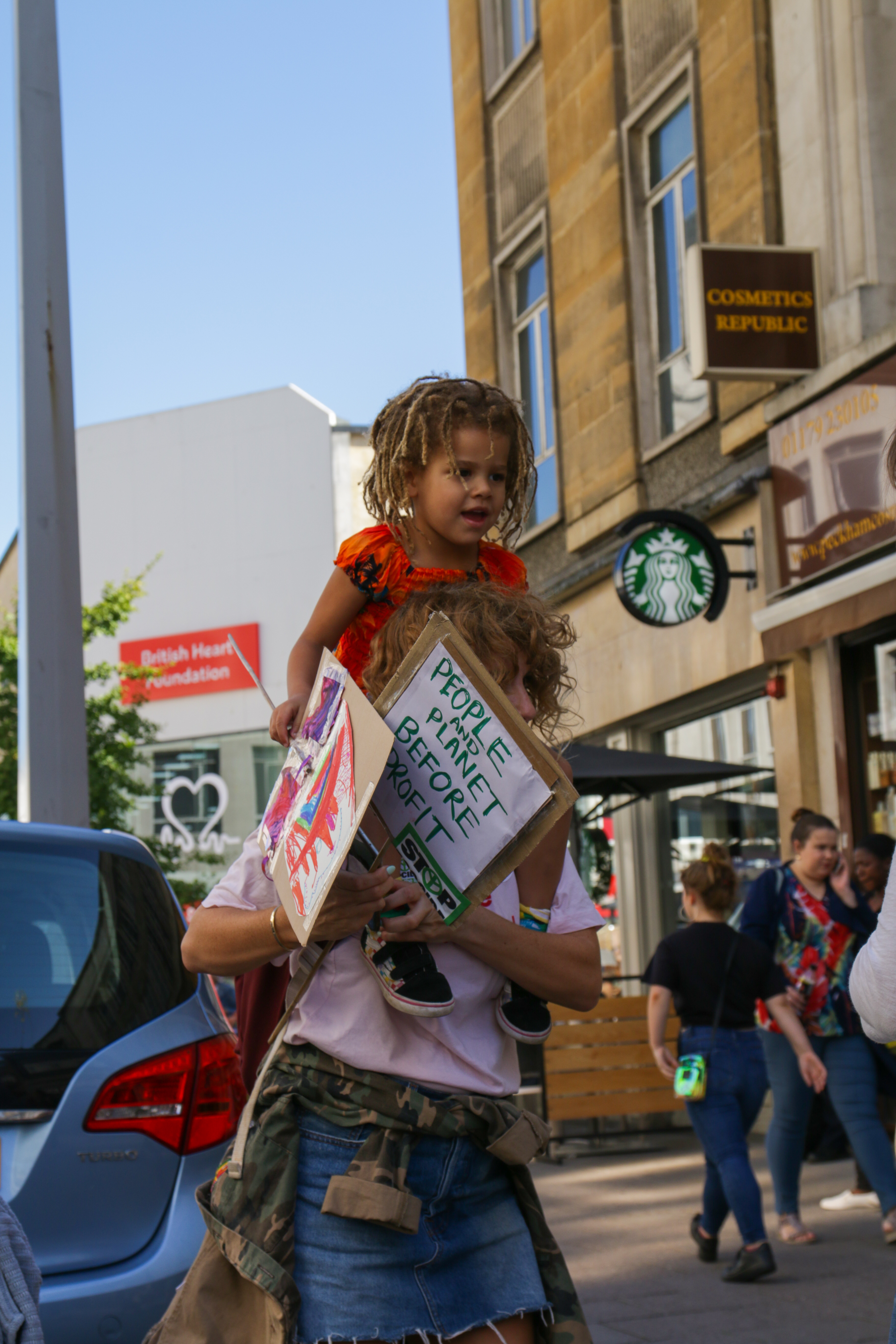 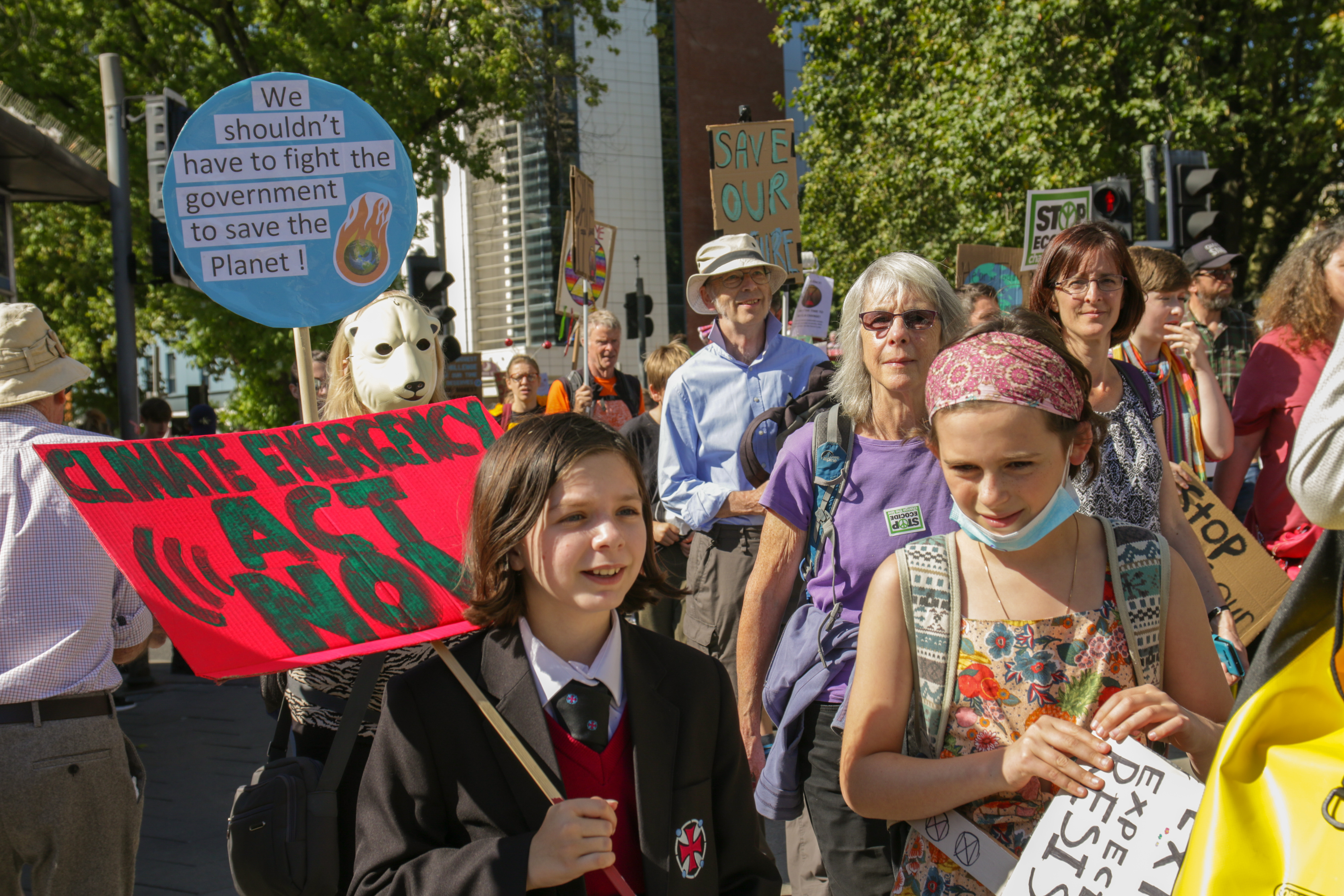 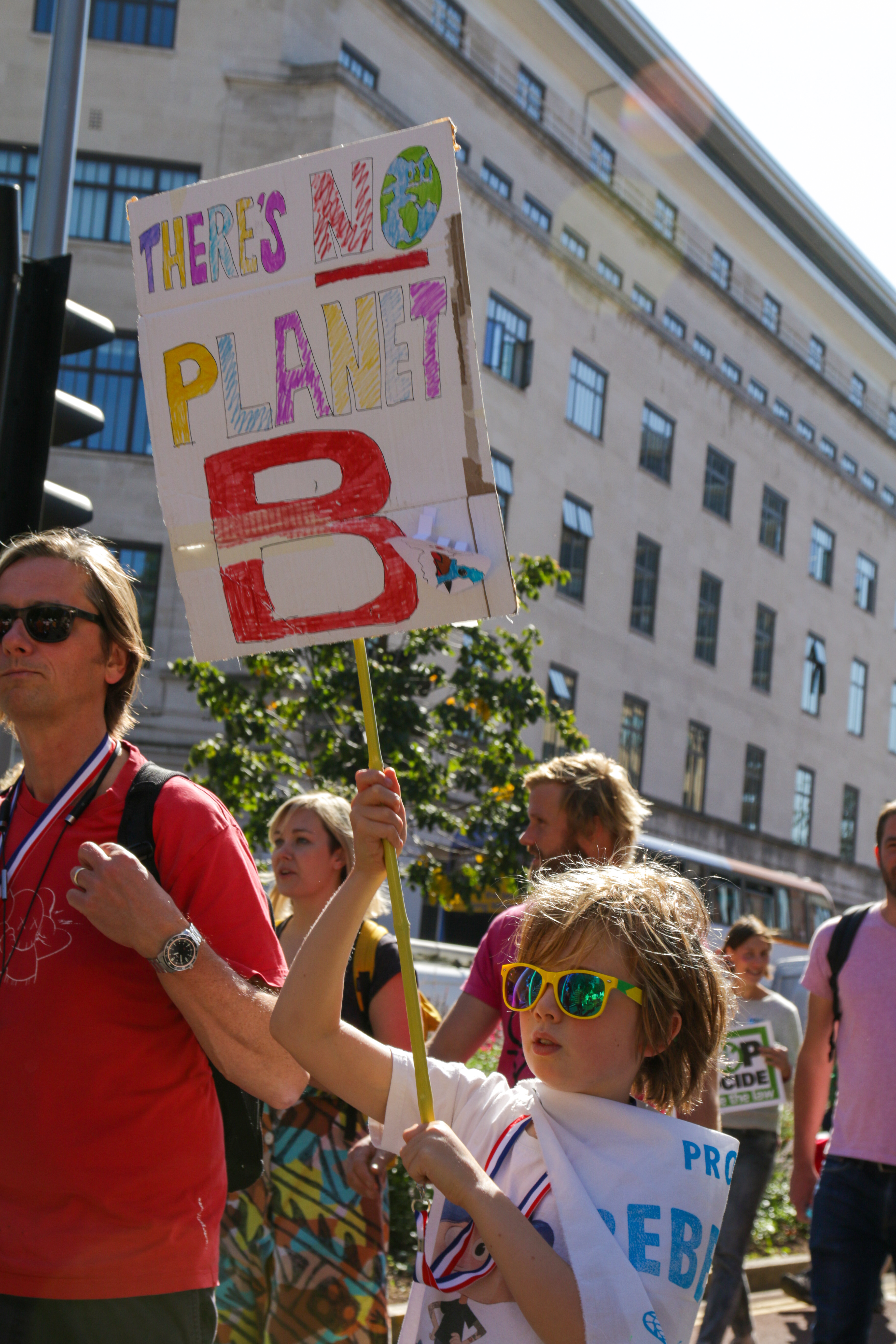