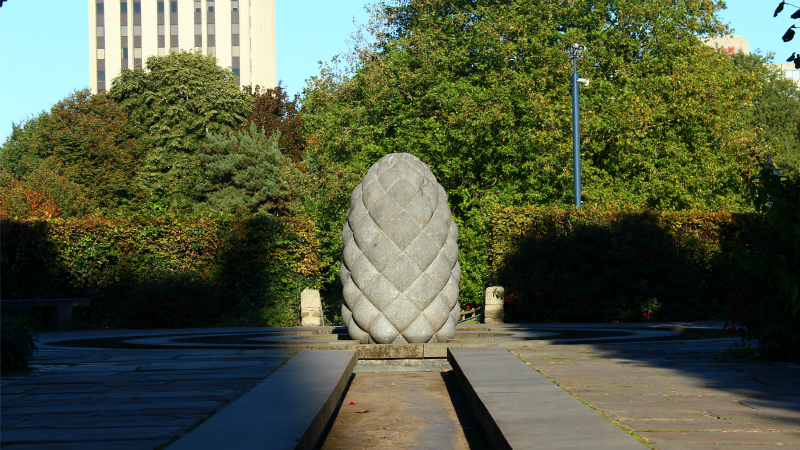 Castle Park is a Bristol landmark with a rich and varied history. Currently at the centre of a public consultation, the city council is looking to invest in the space, with plans already underway to get some of the abandoned water features up and running and improve access to the remains of the historic castle. Current ideas for improvement include a new play area and a boules pitch. A pop-up exhibition showing some proposals is taking place in St Peter’s Square from October 21-27.

Here are 17 things you may not have known about Castle Park:

1. Archaeological excavations suggest that the first settlement in the Bristol area was formed some time in the Anglo-Saxon period on the same site as what is now Castle Park, just to the east of St Peter’s Church. The entire town would have been situated between the Avon and the Frome, which at the time merged into the Avon close to Bristol Bridge.

Pennies minted in the reign of King Canute

2. Bristol Castle was once the largest Norman castle in England, built in the 11th century by Robert the first Earl of Gloucester and illegitimate child of Henry I. Oliver Cromwell eventually demolished the castle in 1656 following an Act of Parliament. Now, only a few crumbling walls and underground chambers remain.

3. For centuries, what is now Castle Park marked the geographical and commercial centre of Bristol, which was laid out since medieval times in a symmetrical plan centred on the crossroads of Wine Street, High Street, Broad Street and Corn Street. This central district remained intact for centuries, until it was almost completely destroyed in the Second World War.

Robert Ricart’s map of Bristol, drawn when he became common clerk of the town in 1478. His drawing was the first such map of an English town.

4. The ruins of St Peter’s Church are now a memorial to the civilians and auxiliary personnel killed in the Bristol Blitz. Between November 1940 and April 1941, Bristol suffered six major bombing raids, killing 1,299 people in total.

5. The large bandstand towards the Old Market side of the park, sporting a mini-sculpture of a ship on its roof and now more a haunt for gangs of teenagers than musicians, was presented to the city by the Evening Post in 1982, marking 20 years since the paper replaced predecessor the Evening World.

6. The Normandy Garden of Peace was opened in the park in 1995, and has five silver birch trees to commemorate the five D-Day beaches. Bristol veterans meet in the space twice a year – on the anniversary of the landings and on Remembrance Day. The garden also houses memorials to Anne Frank and the victims of the atomic bombings of Hiroshima and Nagasaki.

7. St Mary-le-Port church was founded in Saxon times. Found hidden from view at the western edge of Castle Park, it is now only a ruin, its tower just peeking over the former Bank of England building. The church was rebuilt and enlarged between the 11th and 16th centuries.

8. Mary-le-Port Street was a busy shopping area before the war, and used to run along the northern face of the church, with buildings so warped that neighbours could almost shake hands with those in the houses on the opposite side of the road.

9. Castle Street on the south-easterly edge of Castle Park was a hub of commercial activity right up until 1940, with Boots, Marks & Spencer, British Home Stores and Woolworths all trading until 10pm to cope with the demand of Bristol shoppers. A few shops survived the war and business continued until 1966, but all that exists of the original buildings today is a fragment of the King’s Hall of the old castle, which formed part of the old Boots store.

10. At the corner of Wine Street and High Street overlooking Castle Park stood the Dutch House, a well-known local landmark with a five-storey timber frame. It was once a private residence, then a bank, and following that several different retail and office spaces. Its last occupier before the war was the Irish Linen and Hosiery Association.

11. Facing Bristol Bridge on the corner of High Street stands a small pyramid, which marks the entrance to a multitude of tunnels underneath Bristol’s Old City, some dating back to the 12th century when Bristol was the centre for wine imports. Many of the tunnels were interlinked, making it once possible to walk from Corn Street, under the bustling roads, all the way to Castle Park.

12. On a remaining wall near the base of St Peter’s Church, a colourful plaque commemorates four men from Bristol who died fighting in the Spanish Civil War of the 1930s. The plaque was mounted in 1986 and adorned with mosaics in 2011.

13. Next to St Peter’s is a once-abandoned sensory herb garden, which was given a new lease of life earlier this year by volunteers from homelessness charity St Mungo’s Broadway. The volunteers have been working towards gardening and landscaping qualifications whilst tending the Castle Park plants, with a few already landing themselves full-time jobs in the industry.

14. The Floating Ballast Seed Garden, moored at Castle Park, is a project set up by a team from the Arnolfini in 2012 to bring life to an old grain barge, filling it with plants all grown from seeds that are believed to have been brought to Bristol in the holds of sailing vessels from around the world. The garden was originally a heritage project encouraging people to learn about the city’s maritime past, and is now treated as a public artwork.

15. The water feature near the bandstand, which resembles an overturned acorn, was installed in 1993. It is a sculpture by Peter Randall-Page called Beside the Still Waters, made using Kilkenny limestone.

16. The striking bronze drinking fountain in the centre of the park is by sculptor and potter Kate Malone. If it seems familiar, you may have seen the full-size ceramic model of the fountain on the ground floor of Bristol Museum & Art Gallery.

17. Edna’s Kitchen is the only permanent food and drink establishment in Castle Park. Before Edna’s, this council-built structure was home to the short-lived Diamond Cafe, whose tenure ended in tears.

18. The former Norwich Union and Bank of England buildings in the north west corner of Castle Park have been a point of contention in the city since before they were built back in the 1960s. An 11,500-strong petition came out against the construction at the time, but plans went ahead regardless. The site was only occupied for a few years before it became the derelict eyesore that can be seen today.

19. Of all the war’s architectural victims, the grandiose St Peter’s Hospital was one of the most mourned. Backing onto the Floating Harbour, the lavish Jacobean building was originally built as a merchant’s house, with the ornate façade and fanciful interior serving as an obvious display of wealth. After exchanging hands between several families it was bought by the Bristol Board of Guardians and converted to a workhouse, which they named The Purgatory, with an adjoining hospital for the sick poor.

Inside the boardroom of St Peter’s Hospital

20. A sally port, one of the hidden entryways to the old Norman keep of Bristol Castle, was discovered in Castle Park in 1991. It served as a postern gate accessed via an underground tunnel, allowing the castle’s defenders to leave the castle and attack besiegers.

21. Redcliffe Rowing Club, founded in 1847, had premises mounted on a floating wooden stage at the back of what used to Bridge Street (along the line of the main path now cutting through the park). Close to this was one of the few local relics to survive the war – a covered gent’s urinal which emptied straight into the Floating Harbour and survived well into the 1950s.

22. Pubs that used to stand on the current Castle Park site include:

– The Bridge Hotel on Bridge Street
– The Old Crown on Broad Weir, built in the 17th century and revamped in 1906
– Standard of England on Castle Street, which was run by a widow named Daisy Williams during the war. On November 24, 1940 Daisy went out to visit her daughter and left the barman to run the pub. That evening the air raid siren sounded and the pub was destroyed. She then went on to manage The Portcullis in Clifton, which still stands today.
– The Old Castle, which only sold Bristol United Beers from a brewery in Lewin’s Mead.
– Three Cups & Salmon on Castle Street
– Oliver’s Wine Vaults on High Street
– Bacchus on Lower Castle Street
– Raven Hotel on Mary-le-Port Street, run by the Lyons family, who owned several other pubs around Bristol including The Fox on Peter Street
– George Hotel on Wine Street
– Bee Bees on Dolphin Street was bombed in 1940 so landlord Charles Edwards moved to Bridge Street, which was also bombed two months later.