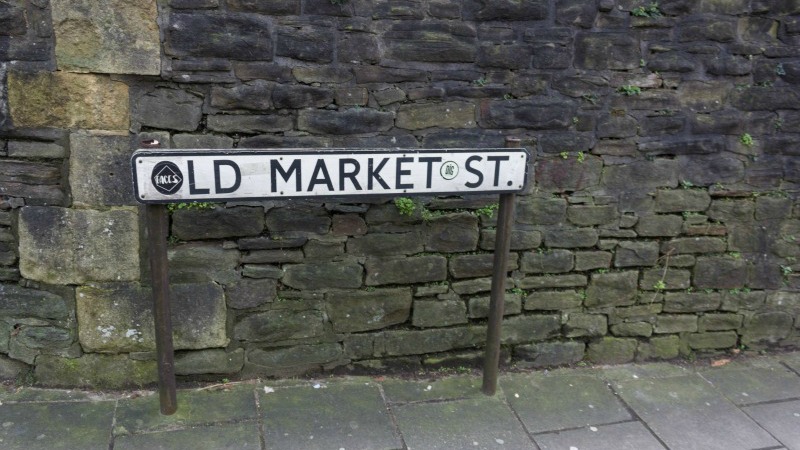 Regularly touted as the next place to be, there are signs that the Old Market Quarter is slowly awakening from a long period of relative neglect.

Whilst cafes and trendy bars are already fast moving in, a neighbourhood plan has already been drawn up for how to take the area forward.

In a rare move, the council is asking for residents in the Old Market Quarter (which covers from Castle Park to Lawrence Hill roundabout, and from The Dings to the Frome) to vote on the new plans in a referendum on February 25. Here some interesting facts about the area you might not have known:

Trams outside the Empire Theatre, circa 1914. Picture from Paul Townsend

The buzzing heart of Old Market, full of theaters and thriving shops in the early 20th century, was also the gateway to much of East Bristol. As a major tram terminus it served Kingswood, Hanham Staple Hill and Eastville as shown in this rather remarkable map of the tram network from 1911. Before the war and the town planning disasters that came after, people would alight in Old Market and walk to the main shopping streets on Castle Street and beyond. Now Temple Way bypass severs the area from the city centre.

2. Host for the “Bristol Sound”

For years (long before 6 Music Festival set up to broadcast their festival from inside the building) this 1829 former church has been hosting live music. In 1976 it ceased to be a functioning church and was sold by the Church of England to Bristol Caribbean Community Enterprise group, with a covenant to ensure its continued use for youth, community and arts activities. Since then it has hosted some of Bristol’s finest and played a key role during the emergence of the “Bristol Sound” in the 1990s, with acts like Roni Size, Smith & Mighty and Portishead cutting their teeth here.

Let’s be honest: it wouldn’t be a place in Bristol if there hadn’t been a riot there at least once. And this was up there with some of the biggest. Deep in the Great Depression in 1932, 4,000-5,000 people gathered from the National Unemployed Workers Movement to protest against a 10 per cent cut in benefits (sound familiar?). They planned to march to the Council House, which was then on the corner of Corn Street and Broad Street. But police diverted the crowds to Old Market where tempers flared and battons were drawn. “Sticks with nails protruding were being thrown at and used upon the police,” a local policeman said at the time. The local constabulary was heavily criticised in the days after, accused of using excessive force (and hospitalising hundreds) to clear the area.

It sort of goes without saying that Old Market was an old market. But where you had an old market, you often had a court to deal with the scalawags who visited on trading days to steal and what not. The pie-poudre court (which comes from the French, “pieds poudrés” which can be translated as “dusty feet”) was set up in Norman times under an old oak tree where the Stag & Hounds now stands to deal with “thieves and debtors”. It moved inside the building at some point and the building eventually became a pub. The court was not formally abolished until 1971, but had not been used since 1870, the date of the last major fair in Old Market.

This year Old Market celebrates its 21st anniversary as the home of “Bristol’s gay village”. The community has grown in the area to include Proud Bar, The Palace, The Retreat and, of course, Bristol Bear Bar, which lays claim to being the “only bespoke bear bar in the UK”. But what is a bear bar, I hear you say. Well, quite simply a bar for “bears” – often a “larger, hairier man”, according to sources. But you don’t have to be big and hairy to come in and enjoying a drink. You could be a “cub” too.

It is estimated that Amelia Dyer has almost double the number murders (about 400) to her name than Harold Shipman. Born in nearby Pile Marsh in 1829, she eventually settled in Trinity Street where she set up an operation known as baby farming, taking unwanted children from mothers for a regular fee or small payment. Amelia drugged her babies with opiates and left many of them to become emaciated and starve. Eventually she figured out a better and quicker way of making money – by murdering them. When police cottoned on she was sentenced to six-months hard work for apparent neglect. But she returned with a more efficient practice of strangling babies with white tape, wrapping them in parcel paper and dumping them in a carpet bag in rivers and ditches. She evaded capture by travelling to different towns and cities, changing her alias as she went. She was hanged in 1896.

Hydra Books has been serving coffee, providing radical literature and hosting some of the most right on chat in the city since it opened in 2011. Run by local people as a workers’ co-operative, the shop grew out of Bristol Radical History Group. What makes it different from a normal bookshop is that this is a “community space” which offers the opportunity for non-commercial authors and publishers to meet and discuss their work. The bookshop also hosts music and events too – including monthly discussions by the Bristol Anarchist Federation.

Sir Thomas Lawrence, a leading British portrait painter and child prodigy, was born in a stunning Queen Ann period baroque house (now wedged between some post-war architecture) in Redcross Street in 1769. Known as “Tommy” to locals, the self-taught artist was providing for his family by the age of 10 through his pastel portraits. By the age of 19 he had received his first royal commission to paint Queen Charlotte and went on to become the second president of the Royal Academy of Arts.

Built in 1869 in anticipation of a new railway terminus that never came, this beautiful grade II listed building was known as The Palace Hotel, but now stands as The Gin Palace. It is now an established part of Bristol’s gay village. The pub is known for is lavish and theatrical decorations “that would put the Moulin Rouge to shame”. The hotel was supposed to be named the Railway Hotel in the hope The Great Western Railway would open a terminus in the area.

Opened in 1893, the Empire Theatre of Varieties was (another) concert hall on the thriving Old Market. It was here that a young Cary Grant had his first show business job as a lime-lighter. In 1931 the Theatre was taken over by ABC for the showing of films continuously. After the war the Empire struggled and was eventually taken over by the Bristol Corporation (the then-council) and the lease was sold to the BBC in 1954, before the Theatre was demolished in the early 1960s and the site was eventually covered by the beautiful roundabout and flyover of Temple Way that we see today. The Empire Theatre name was given a second lease of life in 2013 at the back of what is now the Old Market Assembly. But the new venue didn’t last long and now houses the Wardrobe Theatre.

One of hundreds of Methodist meeting halls built across the UK, the Central Hall on Old Market was completed in 1924 and soon after became the place to be on a Saturday night for concerts, music, film and comedy. It was used as a shelter during World War Two bombings. It benefited from the war-time fire at Colston Hall which left the city with limited options for all-important moral-boosting concerts. Due to the increasing amount of people visiting, running costs became too high and in the late 1980s the building was bought and turned into flats.

Black American GIs on Park Street during the war. Picture from Paul Townsend

The Spread Eagle pub in Old Market, destroyed by the Temple Way bypass works, was a predominantly “black” pub. But it came under regular attack during the war from white American GIs stationed in Bristol who took a disliking to white girls hanging around in there. The paratroopers often hunted in packs, looking to stir up trouble across the city. One brawl on Park Street started when white GIs (mostly from the American south) objected to black men socialising openly there. The brawl involved about 400 people, and left scores injured and one person dead.

Gardiner Haskins celebrated its 190-year anniversary in 2015, selling every item of homeware and essential JML product since 1825. Or something like that. Haskins has actually taken many forms and existed in many locations since it was founded. At its peak, the store had showrooms in Nelson Street, All Saints’ Street, Duck Lane and Whiteladies Road. It moved into its current location – an old Victorian factory – in 1958. Among its claims to fame, Gardiner Haskins provided metal work for the old Wembley Stadium towers and sold brass drawing instruments to Isambard Kingdom Brunel while he was in town working on the Great Western Railway and SS Great Britain.