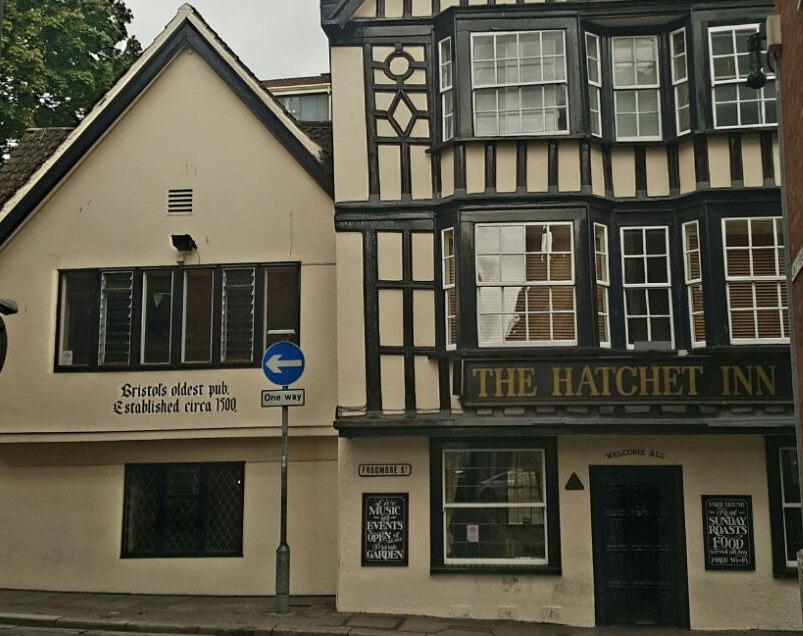 Following the news that The Hatchet Inn has been bought by the owners of Butcombe Brewery, its claim that it is the oldest pub in Bristol has once again been bandied about.

But is this claim actually true? Or is it as apocryphal as the pub’s other well-known fact that its front door allegedly contains a layer of human skin?

The Hatchet is not the only Bristol pub that claims to be the city’s oldest. Other contenders to the crown are the Rummer in St Nick’s Market, the Llandoger Trow on King Street, and not one but two different Shakespeares – on Prince Street and Victoria Street.

Proudly painted on the walls of The Hatchet are the words: “Bristol’s oldest pub. Established circa 1500.” This answers the question then. Not quite.

Beer has been served here since before the English Civil War and it’s said that pirates such as Blackbeard have sipped on a post-pilfering pint at the bar.

With its name inspired by the woodsmen of Clifton Wood, records show that the pub was first licensed in 1606. During the 18th century, the pub became known for its cock-fighting ring which later became a bare-knuckle boxing venue.

As for the claim of being Bristol’s oldest pub, Jay says: “We’ve had bands from Korea, America, Australia, Canada and all over Europe want to play here simply because it’s the oldest pub in Bristol.

“It is close between us and Llandoger Trow, by about 40 years I’d say, but we are definitely the oldest.”

Visit England’s website proclaims that the Llandoger Trow is the oldest in the city, with Blackbeard also reputed to have drunk here. 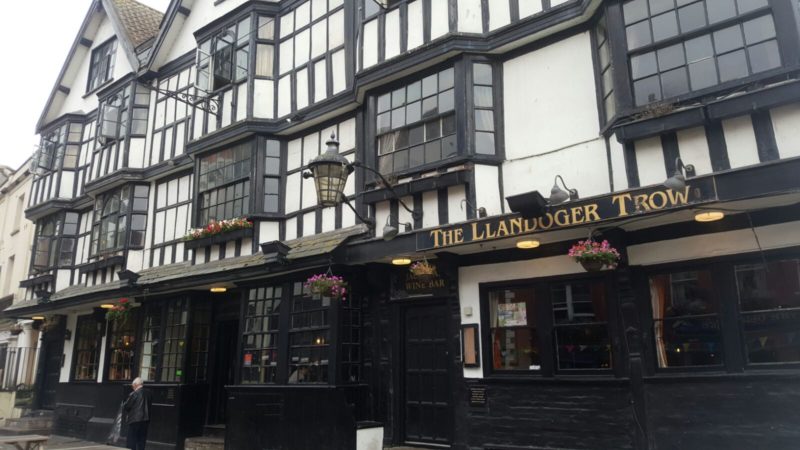 “Just one look at the pub’s Tudor-style exterior is enough to transport you back to times of pirates and secret tunnel,” Visit England say.

And while they are not wrong about its transporting effect (the owners are certainly in no hurry to let you forget its link with smugglers with plenty of pirate paraphernalia), its walls also tell the story of the pub outlining that it dates back to 1664 – more than half a century after The Hatchet.

A short walk away from King Street, tucked away down All Saints Lane next to St Nick’s Market, is The Rummer.

The Rummer is now home to a modern cocktail bar, restaurant and as of 2016 a micro gin distillery in the basement; but despite its modern refurbishments, its history as an inn dates way back to 1241. 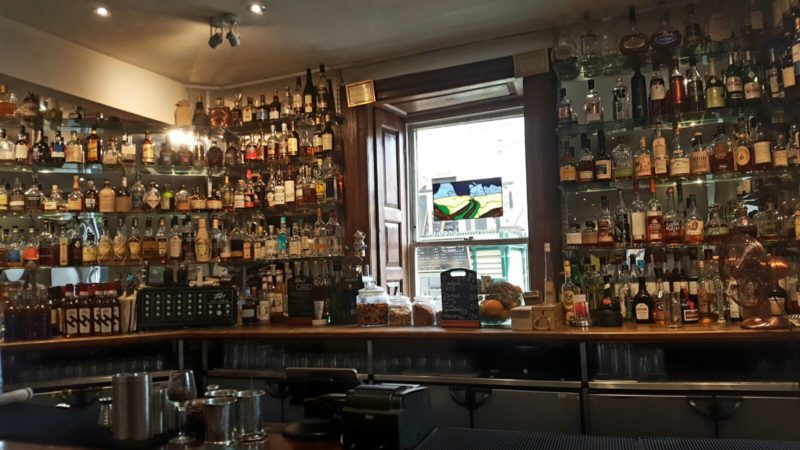 The bar inside The Rummer

While many old inns have changed their name in their long histories, The Rummer is a good contender for holding the record for The Pub With The Highest Number of Trading Names Since Its Foundation.

In 1241 it was an inn called the Greene Lattis, facing the High Street opposite what is now Castle Park and extending backwards to the present All Saints Lane.

1440 saw the early premises rebuilt and become known as the Abyndon. More renaming was to follow in 1565 when the Jonas Inn was rebuilt and the Abyndon was incorporated into it. The newly built inn was dubbed the New Inn.

It was the building of the Exchange in 1743 which finally fixed the old inn’s name as The Rummer and also gave it its present structure.

Two centuries of booming business – including being home to the first Berni Inn in the UK – were sadly followed by a closure in late 1990s, but a major refit in 2005 made it very much a focal part of the regenerated St Nick’s.

So what other pubs can lay claim to be Bristol’s oldest? Well, The Shakespeare on Victoria Street has the date 1636 painted among the timber beams on its outside wall. 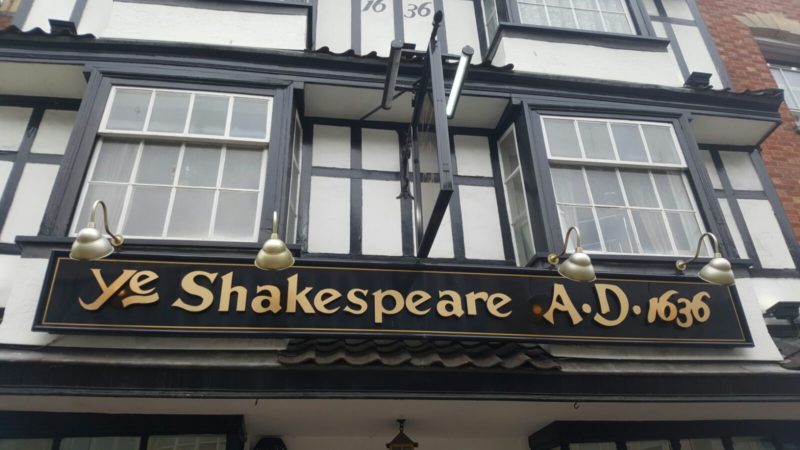 A remarkable history indeed, but it’s still 30 years the Hatchett’s junior. Originally built in the 17th century as a timber framed house, this Shakespeare was extensively restored in 1950 and re-roofed in 1992.

From the exterior, you’d be forgiven for thinking that it would be racked with history and charm. But the inside reveals a charmless gastropub vibe in sharp contrast to the evocative interior of the King’s Head almost next door.

The staff also seem unaware of the pub’s history. Any connection to its past seems to disappear upon opening the front door.

The opposite is true at The Shakespeare on Prince Street, with this message greeting new arrivals to a pub named due to its proximity to the Old Vic: 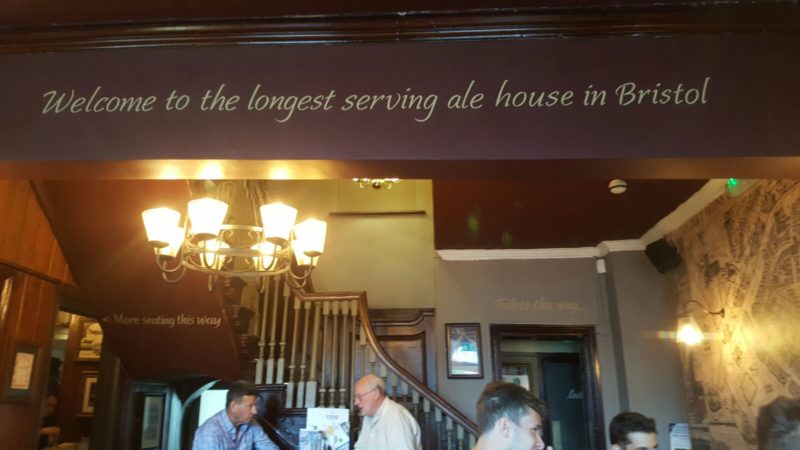 On further investigation, the landlord and landlady admitted that a lot of the tavern’s history is unknown but they kindly unveiled dusty framed articles, one of which can be read online here, which dates the pub back to 1726.

A regular who didn’t want to be named for fear of his daughters finding out he was in a pub in the middle of the day, said that his money was on the Hatchet for being Bristol’s oldest.

It’s a debate set to continue over numerous more pints, in all of the pubs in Bristol where Blackbeard once drunk.