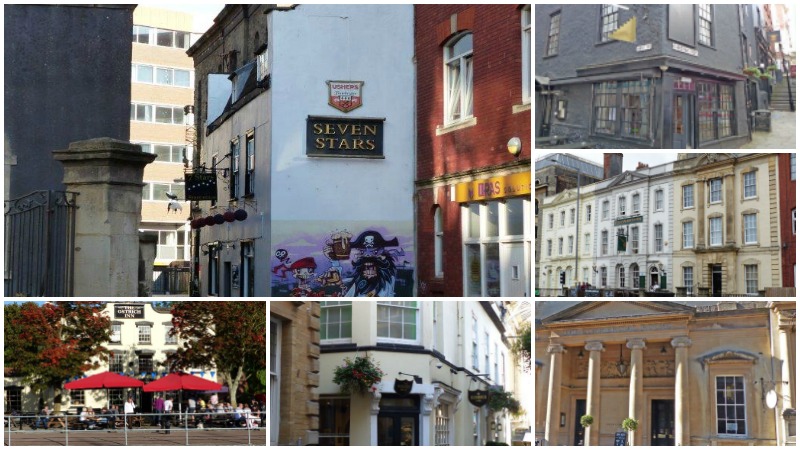 For most of the eighteenth century, Bristol was Britain’s leading port after London with great wealth brought to some of the city’s inhabitants through trade and slavery.

During the dark days of Bristol’s involvement in the slave trade, the city’s pubs played a surprising and significant part in its development and subsequent abolition.

The Seven Stars pub in Redcliffe played the most significant role in Bristol’s slave trade saga.

Dating to the early 1600s, The Seven Stars is tucked away on a cobbled street in Redcliffe, under the shadow of St Thomas the Martyr church.

Internationally, the pub is of huge significance because of its involvement with the abolition movement.

A relief plaque on the front the building tells the story of brave young Quaker Thomas Clarkson who stayed here in 1787 and, with the help of landlord Thompson, gathered evidence for William Wilberforce.

Thompson took Clarkson to rough and rowdy pubs on the quayside area of Marsh Street to interview slave ship crewmen.

The results of his findings were crucial in changing public opinion, initially for the plight of British seaman, but then for enslaved Africans.

Much of the city’s prosperity was built on the ‘Triangular Trade’, in which trade goods, including glassware produced in Bristol, were shipped to the west coast of Africa and traded for men, women and children who had been captured by slave traders or bought from African chiefs.

A labyrinth of caves still exists underneath Bristol, resulting from the excavation of sand used in the process of glass manufacturing.

A section of wall in the bar of the Ostrich Inn, Lower Guinea Street, has been partly demolished revealing the interior of one of many caverns created under Redcliffe.

On the barbaric leg of the triangular voyage, slaves acquired in Africa were densely packed on the merchant ships and transported to the West Indies to work on sugar plantations.

Mounted above the sign of the Drawbridge pub on St Augustine’s Parade is the replica of a ship’s figurehead. The original was fixed to the prow of the paddle steamer Demerara, named after the former British sugar colony (present day Guyana) where, in 1823, the first protest against slavery took place.

The bloody revolt involved almost all of the island’s 12,000 plantation slaves.

A number of handsome buildings in King Street owe their existence to wealth generated by the slave trade. Bristol merchants, shipbuilders, sugar refiners, plantation owners, trade goods manufacturers and bankers met to discuss business in pubs like the ancient Llandoger Trow and the King William Ale House, with its atmospheric dimly lit interior.

In the West Indies enslaved Africans were exchanged for raw sugar which, on the final stage of the round trip voyage, was brought back to Bristol for refining in one of the many sugar houses.

Until very recently, the Christmas Steps pub was named The Three Sugar Loaves in reference to its proximity to a nearby sugar processing house which burned down.

Sugar is highly combustible and fire was a constant hazard in the refining industry, destroying no fewer than 11 of Bristol’s sugar houses between 1670 and 1859.

The only one remaining has been preserved and converted into Hotel du Vin on Lewins Mead. With its giant internal chimney still in place, the boiler room of the processing house is now the hotel reception with the former engine house utilised as a wine cellar.

The tucked away Rummer Tavern on All Saints Lane next to St Nicholas Market is named after a large vessel for drinking the spirit produced from West Indian sugar.

Sugar was also used in the production of rum and The Rummer is named after a large vessel for drinking the dark spirit. This tucked away tavern was a meeting place for the romantic poets Robert Southey, Samuel Taylor Coleridge and William Wordsworth, who effectively used the power of the pen to attack ‘the traffickers in Negro blood’.

Southey’s most powerful images appear in The Sailor Who Had Served in the Slave Trade, based on a true incident in which a young African woman dies when a sailor is forced by a cruel captain to whip her because she refused to eat and tried to jump overboard.

The dockside Shakespeare Tavern, at the southern end of Prince Street, was originally the central dwelling in a terrace of houses designed in 1702 for slave owners.

The Commercial Rooms, 43 to 45 Corn Street, built in 1810 as a new centre for Bristol’s businessmen, is now a Wetherspoons’ pub.

A statue on the building depicts Britannia checking the monies due to her from the rest of the world.

This article is taken from Terry Townsend’s latest book Bristol & Clifton Slave Trade Trails published by Pixz, an imprint of Halsgrove Press at £9.99.

Read more: Going back to his roots; how one man traced his family back nine generations to his enslaved ancestor