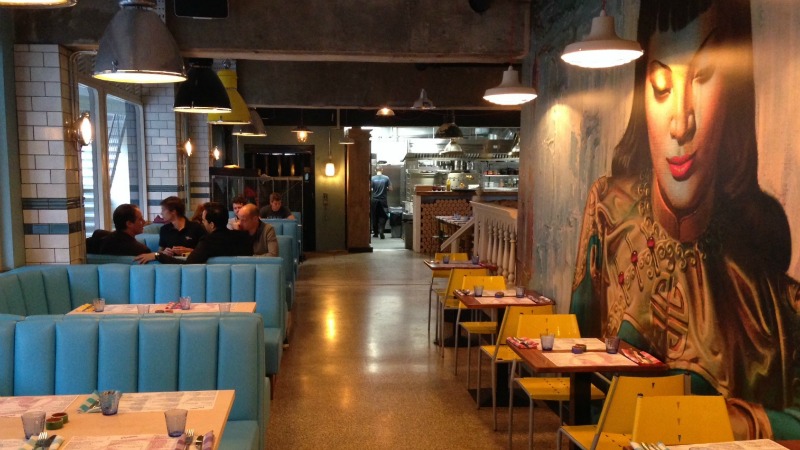 Okay, let’s get this out of the way first:

‘Bambalan’ is actually Puerto Rican slang for lazy bum – and it’s also the name for a new Bristol bar and restaurant which has been in the planning for almost three years from the team behind Hyde & Co, Milk Thistle, Pata Negra and The Ox.

Taking up the first floor of the Colston Tower which in a previous incarnation was the bus ticket office and bus drivers’ social club, Bambalan is so spacious that if so inclined you could spend a long time playing hide and seek among the tiled columns, wicker chairs and bags of charcoal.

And then there is of course the huge terrace overlooking the centre, with enough space to fit dozens of people comfortably.

When the sun is shining this will undoubtedly be thronged, especially as drinks can be ordered from an outside bar.

Even with the rain falling heavily on a recent afternoon, Bambalan still had that summery feel, especially with songs like Heatwave by Martha & the Vandellas playing on the stereo.

Bambalan is the sort of place that when inside – rather like the Lido in Clifton – it’s easy to imagine being on holiday.

From a long drinks list, there is both a lager and a pale ale from Wild Beer on tap, with more beer and cider in the fridge from the likes of Wild Beer again, Moor and Orchard Pig.

All wines are served by the glass, carafe or bottle; then there are tonics and vermouths, a fine selection of spirits with standouts such as the Great King’s Street Artist’s Blend whisky and Evan Williams’ extra aged bourbon, as well as soft drinks from the likes of BBC Food & Farming Awards winners Square Root.

If you like flatbread, you’ll love the food menu with its North African and Middle Eastern feel, with mezzes featuring charred octopus, chicken skewers and baked lamb kefta meat balls to share from £5; and flatbread and a selection of different dips (£4 each or three for £10) including labneh, baba ganoush and taramasalata.

And don’t miss the cakes made especially by Ahh Toots in St Nick’s Market.

When the sun has got his hat on again, there are sorbets and ice creams ready to be enjoyed on the terrace or inside – where Bambalan can give the taste of summer holidays all year round.

Read more: ‘We’re part of a great change in Bristol’